The FA Cup semi-finals began with a clash between Chelsea and Manchester City at Wembley Stadium on Saturday. Both sides have gone through to the UEFA Champions League semi-finals, and this was a chance for both managers to take a step towards another trophy as well. While this was not an entertaining match, Chelsea were able to grab the opportunity and advance to the final, where they will face Leicester City, who defeated Southampton in the other semi-final.

Pep Guardiola’s decision to rotate the squad was questioned by the media, but this loss was about more than just a (supposed) weaker lineup. In terms of tactics, Manchester City had a terrible first half as they struggled to create, while defensively their pressing failed to trouble the opposition’s build-up.

In this tactical analysis, we will look at both teams’ tactics and the effect they had on each other’s approaches.

Chelsea only made one change to the XI that started against Porto in the second leg of the Champions League quarter-final. Hakim Ziyech started with Mason Mount and Timo Werner came into the lineup instead of Christian Pulisic. Jorginho and N’Golo Kanté started in midfield since Mateo Kovačić was out through injury.

Having had one fewer day to rest after their own Champions League quarter-final, Pep Guardiola made wholesale changes to his lineup, bringing in those who did not start on Wednesday. Gabriel Jesus, Ferran Torres, and Raheem Sterling did not start against Borussia Dortmund, but came into the lineup here.

City struggled to press effectively again in this game, which is not a new issue as they suffered similar problems in the first leg against Dortmund. Their struggle was in finding a balance between the intensity of their press and their spacing. Pep needed to figure out whether he could go with a high line and compress space in Chelsea’s half of the pitch, or sit a little deeper to account for the London side’s danger on the counter-attack.

City ended up using only Kevin De Bruyne to press high, with Rodri and Fernandinho staying deeper. This went horribly wrong as the Belgian international would be outnumbered 2v1 against the opposition’s double-pivot. This always gave Chelsea a way to escape as they could choose to advance the ball through the player who was not being picked up by De Bruyne. City struggled with this, especially in the first half. 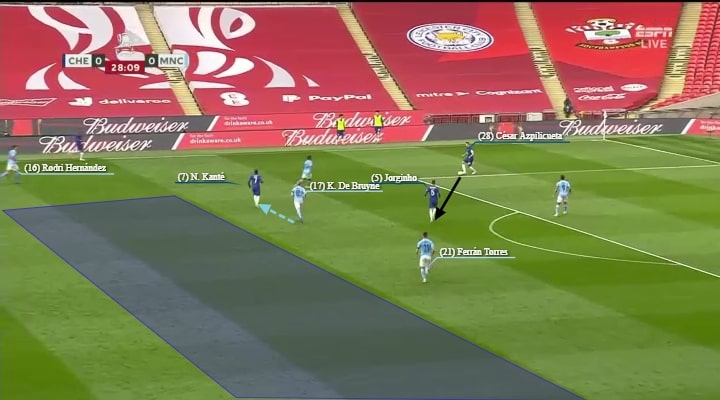 The first image shows this situation. City pressed very high but their full-backs were pinned by the Chelsea wing-backs, which discouraged them from moving too high up the pitch to support the press. De Bruyne moves towards Kanté here, but ideally Sterling should have been dropping onto the Frenchman, and so this opens up the passing lane to Jorginho.

Ferran Torres is central but not applying pressure on any Chelsea player, and this meant that the City lineup was broken up into two disjointed halves of five players each, with the highlighted space being opened up as a result. 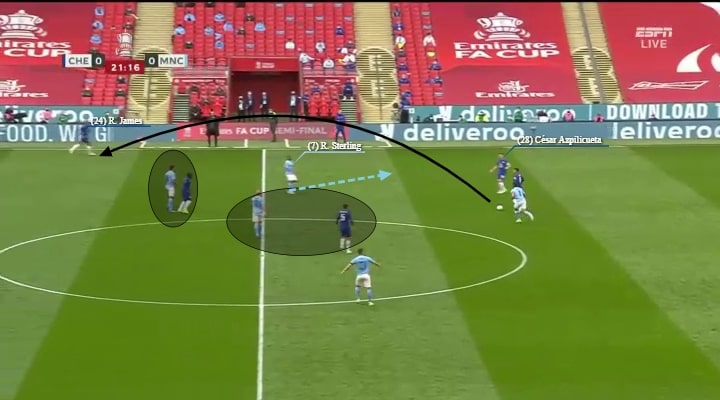 This is another example of City’s press not being executed well. City are defending with numbers centrally – De Bruyne and Rodri are marking Chelsea’s midfielders, while the wingers have also come narrow into the half-spaces to block passes into those areas.

However, this left Reece James unmarked out wide, since Mendy was occupied by the winger. City’s intensity was poor here, as they did not put enough pressure on the ball, and allowed an easy pass to be played out to James. 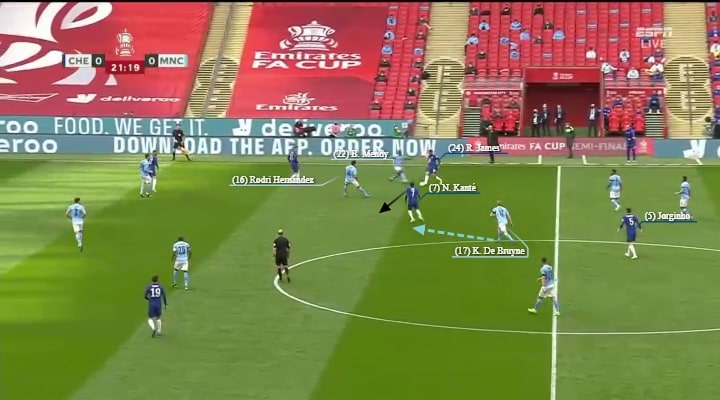 When the ball did go out wide, City were forced to shift out wide but the situation was already beyond their control. Mendy is late to arrive on James due to his deeper positioning, and this meant that Rodri had to move out wide to cover the space behind his left-back. This, in turn, opened up space for James to pass to Kanté, with De Bruyne marking Jorginho initially and therefore being caught behind the play as well.

Mason Mount’s positioning is also crucial here – he comes narrow to force Fernandinho to stay deep and therefore create that space for Kanté. 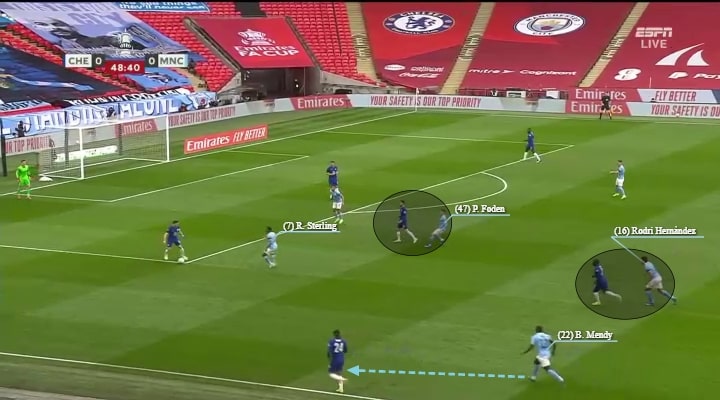 Guardiola recognized this issue at half-time, and therefore City made changes in the second half to counter this problem. We can see here how Phil Foden and Rodri mark Chelsea’s double pivot tightly, which takes them out as potential passing options, and also removes the 2v1 advantage that Chelsea had previously enjoyed in this area of the pitch.

The left-back was also encouraged to press the opposition wing-back high, leaving the centre-back against the opposition winger in a 1v1 (i.e. Laporte vs Ziyech/Werner). This would kill all passing options around Azpilicueta, trapping the ball on the ball side and cause Chelsea problems in playing out from the back.

However, since Chelsea were already in the lead, they did not need to attack as much, and were therefore content to stay in a low block and frustrate City instead. 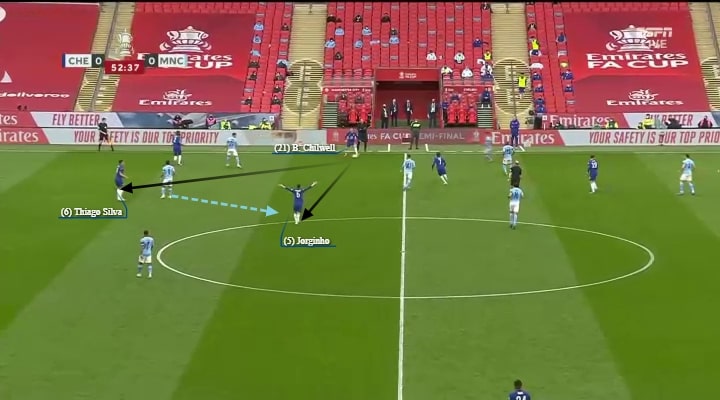 In addition, Jorginho and Kanté should be praised for their individual performances as well. The Italian midfielder was extremely crucial in setting up Ziyech’s goal. He was able to get away from Foden with some great skill before executing a superb long pass for Werner to run on to.

This image is a great one to summarize Chelsea’s dominance over City in this match. Kanté took Foden away to open a lateral passing lane for his wing-back, with Jorginho gesturing for the ball to be played to him.

Jesus does recognize this and drops away from Thiago Silva to try and close down Jorginho. This could have let to a dangerous counter-attack if the ball had been turned over; however, Chilwell was calm enough to see Jesus’ movement and instead passed the ball to Silva instead, who was now the free man. Jorginho had thus become the decoy for that pass, and City were chasing Chelsea’s shadows in this manner for long periods at Wembley.

Defensively, City were outplayed, since their press did not work. Chelsea had a lot of chances to attack space behind the backline and their goal also came from such a situation.

However, City were not good offensively as well. It seemed as though their attacking structure was disrupted by playing Rodri and Fernandinho together in a double pivot, and this, combined with Chelsea’s excellent organization, meant that they rarely threatened the Blues’ goal. 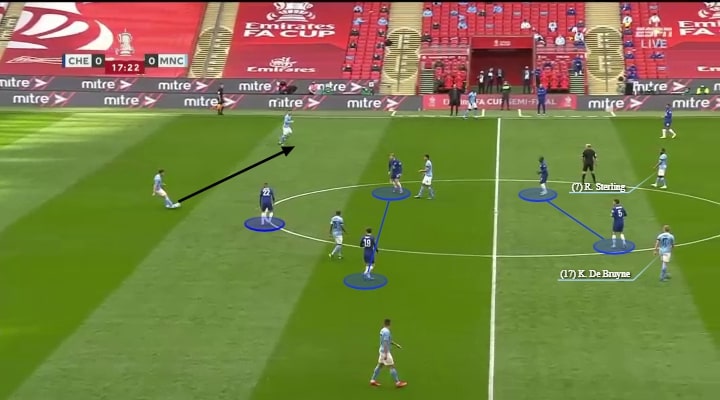 This image shows how Chelsea did not really press high, with the priority being to cover the central spaces and prevent City from making easy passes into the advanced midfielders and forwards. Their shape was roughly a 5-2-2-1 in defence, with the wing-backs dropping deeper and the front five also staying narrow and compact.

Even when City tried to create a box in midfield, with Sterling tucking into the half-spaces, vertical passing lanes rarely opened up as Kanté and Jorginho blocked off those passes. Meanwhile, Chelsea’s wingers were disciplined enough to drop and cover City’s double-pivot even at the expense of leaving the centre-backs free.

Since passing to players centrally was extremely risky, City tried to play outside of the block, using Aymeric Laporte to bring the ball forward. 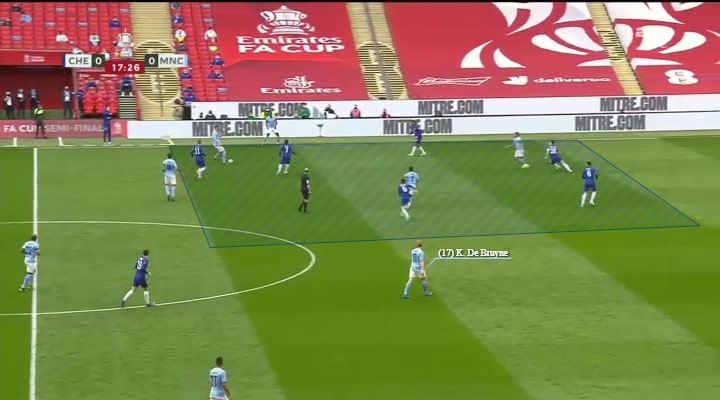 This is a similar tactic to their previous matches against Everton and Leicester City, however, while that tactic worked against the Toffees, it had come unstuck against the Foxes, and it was a similar outcome here as well.

We can see how Chelsea shifted to defend one vertical half while leaving the other half free. Initially, it was Jorginho and Kanté on Sterling and De Bruyne. But when Laporte progressed with the ball, the Chelsea midfield duo shifted cleverly into the same half, leaving De Bruyne alone on City’s right side. In the highlighted blue zone, Kanté was now defending space while also closing down Laporte, while Jorginho marked Sterling. With Werner pressuring the centre-back from behind, Laporte was unable to go back to his partner, and it was difficult to play inside either since the passing lanes were all covered. Chelsea had created a 6v4 numerical advantage in this area as well, and were able to prevent a dangerous situation from occurring.

From City’s perspective, they struggled to create solutions for Laporte. It made no difference whether Jesus dropped deep or ran in behind – he was expertly marshalled by the centre-backs and rarely able to receive in space. The City attackers were also struggling to play in tight spaces, while Mendy was not able to advance into space beyond James, with the Englishman able to keep a tight leash on him. 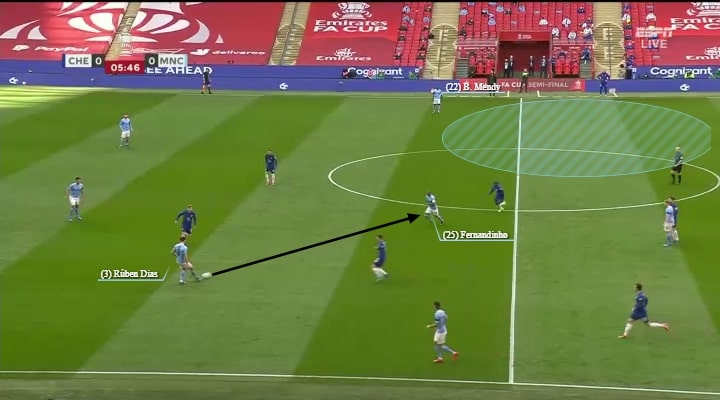 City’s main issue was their inability to find players free in the final third, and they were uncharacteristically poor in playing passes into this area.

In this example, City failed to progress the ball through the wide areas – Rúben Dias could have switched the ball to Mendy but his team, in general, avoided making risky passes in this game. Thus, the Portuguese international chose to pass to Fernandinho instead, who was under pressure from Kanté. 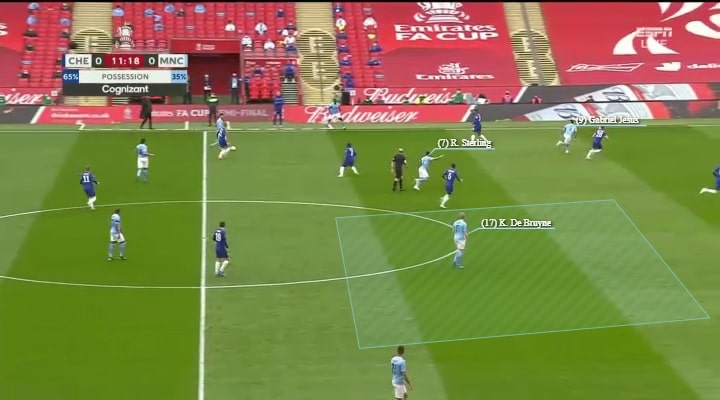 It is the same for De Bruyne as well. The Belgian international had a very quiet game, and he rarely received the ball in dangerous positions from where he could impact the game, before picking up an injury in the second half.

This example is a similar situation to the earlier one. Laporte advanced with the ball but he struggled to find the angle to pass. Chelsea were happy to leave De Bruyne alone, knowing the ball would not reach their numerically weaker half of the pitch. Thus, City’s struggle to find De Bruyne was a huge factor in their lack of creativity in this match.

Apart from struggling for offensive and defensive organization, City also suffered in the first 20 minutes when fighting for second balls. Even though they looked a little better in the second half, they were not close to finding an equalizer. Our analysis has shown how their pressing was especially ineffective, and this is something that Pep must find solutions to quickly if City are to make it to the Champions League final.

Chelsea fully deserved to enter the FA Cup final. They have been transformed under Tuchel, and now have a realistic shot at picking up two major trophies this season. His system has helped to cover individual flaws and magnify strengths, and Chelsea fans can look forward to the future with a lot of enthusiasm under their German manager.