Under Erik ten Hag, Ajax have been playing attractive football and achieving good results in recent years, such as entering the UEFA Champions League semi-final in 2018/19. Some great players, including Barcelona‘s Frenkie de Jong and Matthijs de Ligt of Juventus, emerged from the Dutch side but their replacements have been interesting too. Edson Alvarez joined Ajax from CF América in 2019 and has gradually developed into one of the key players in the squad. This tactical analysis will give a detailed scout report of his playing style and how he successfully integrated into Ten Hag’s game model and tactics.

As the team’s holding midfielder, Álvarez is the team’s most important player and his game intelligence allows him to contribute to the construction phase of the attack 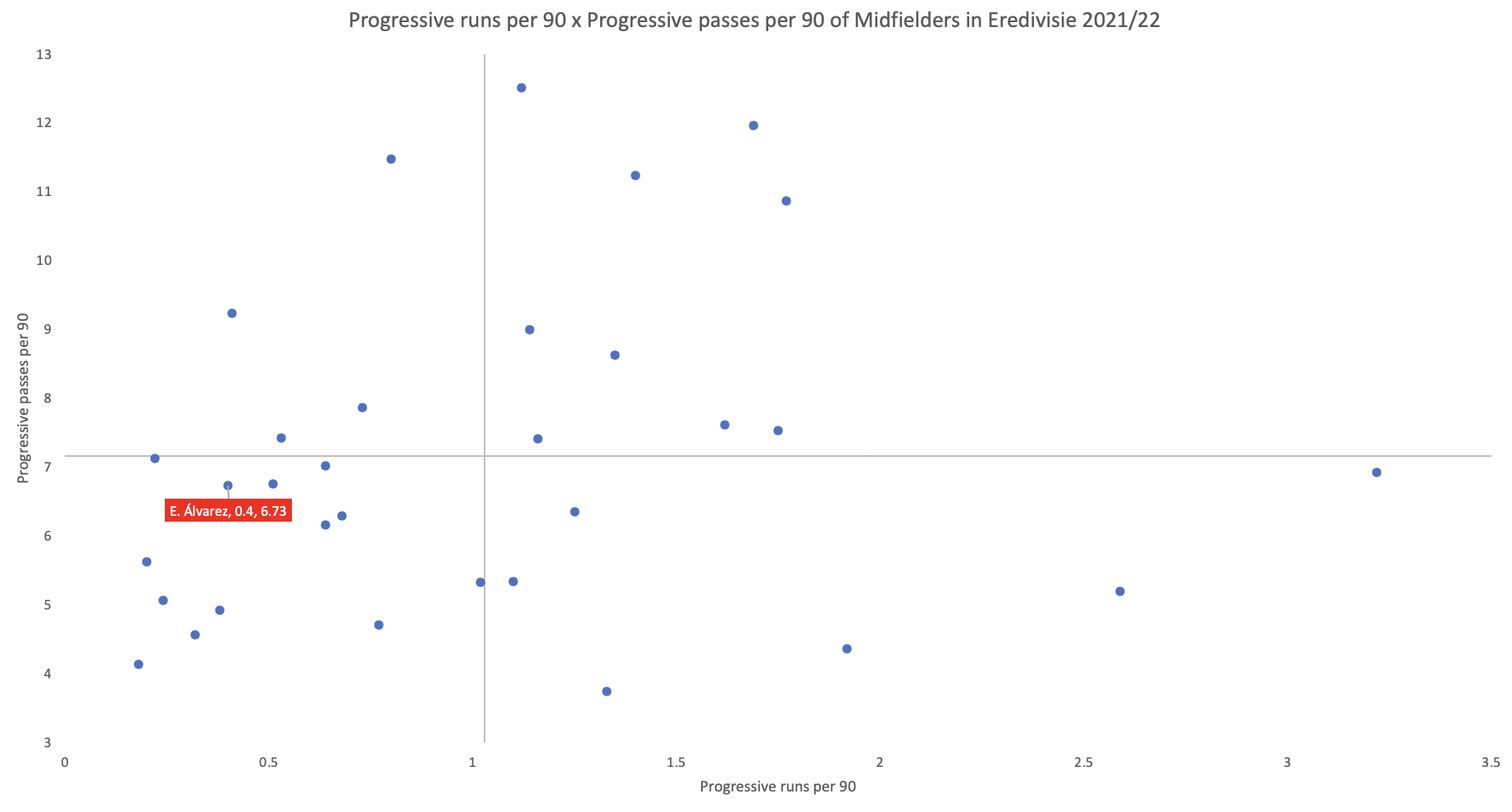 This scatter chart gives the progressive data of Eredivisie midfielders in 2021/22. Although playing under Ten Hag, Álvarez was not outstanding in either metric. The Mexican midfielder had 0.4 progressive runs per 90 and 6.73 progressive passes per 90; his name was in the lower left quadrant. This suggests the player was below mean in both metrics and his ball progression was not his best trait. Nevertheless, Álvarez could still help his team in the build-up through his movement and positioning. 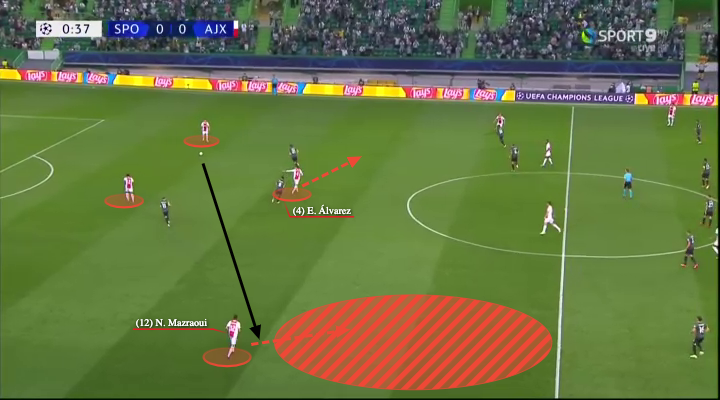 As the holding midfielder, Álvarez has very good verbal and non-verbal communication skills to give teammates instructions. In the build-up, the game picture is in his head, so he can use his movements to bring away an opposition player and open a new passing lane.

Since Ajax are an extremely fluid team under Ten Hag, there is no fixed build-up shape; the players must be able to read and interpret the game before then taking up optimal positions to help each other. In this situation, Álvarez’s intentional move from the centre to the left half-space dragged his man-marker away from the centre. So, the diagonal passing lane from centre-back to right-back was opened and Ajax easily broke the first line with this pass. You could tell Álvarez’s intention by where his finger was pointed, he showed his teammate the direction to Noussair Mazraoui — the move was just a decoy. The right-back could take a simple touch into the red region and the team made significant progress quickly. 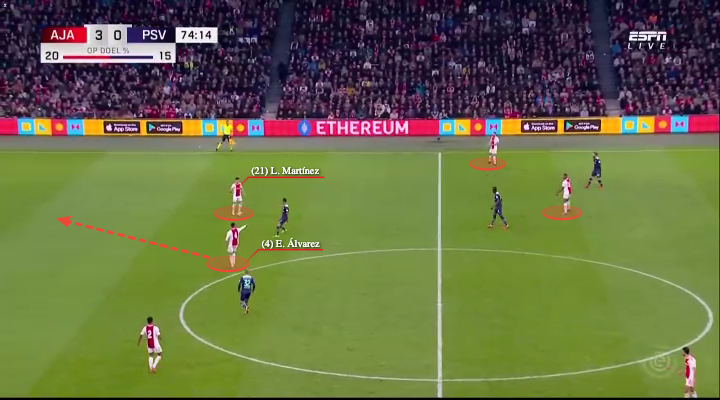 In this second example, Álvarez showed good positional awareness to establish a good ball circulation structure for his team. Again, the Mexican midfielder gave instructions to his teammate on the ball and suggested to Lisandro Martínez: ‘pass it forward’. But this time, Álvarez did not move as he did in the previous example because the context was different.

Given Ryan Gravenberch appeared behind the second line, if Álvarez moved forward, he might have dragged the midfielder out but there’s also a chance he’d draw the PSV winger, Yorbe Vertessen, to the left side. It might congest the receiver’s room and since the opposition striker was near Martínez, the return passing lane was not safe. Then, Ajax would be forced to play in tight spaces.

Therefore, Álvarez’s decision to drop back a bit was safe and secure. This would provide a “depth option” for teammates, allowing them to go backward if further progression was unavailable. The positional mindset of Álvarez would be a great asset to teams looking to keep the ball and attack at an optimal tempo. 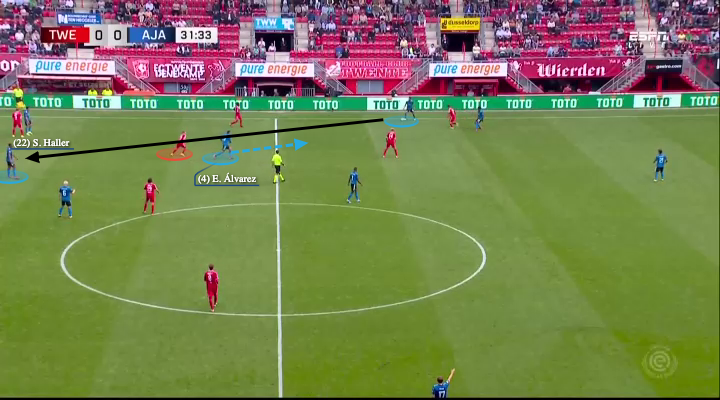 This was another situation where Álvarez’s off-ball movement opened a passing lane for his teammates. This time, there were more opposition players around and Ajax had the ball on the right side, they must play forward, here, as a Twente striker was pressing from the back.

As a holding midfielder, Álvarez was quite supportive; even if not always being the receiver, his movement would ultimately free up space. In this situation, he dropped to offer a short passing option, which created a 2v1 decisional dilemma for the opposition midfielder. As the Twente midfielder stepped up to prevent Álvarez from receiving, the passing lane to Sébastian Haller was freed and that helped Ajax break the line. 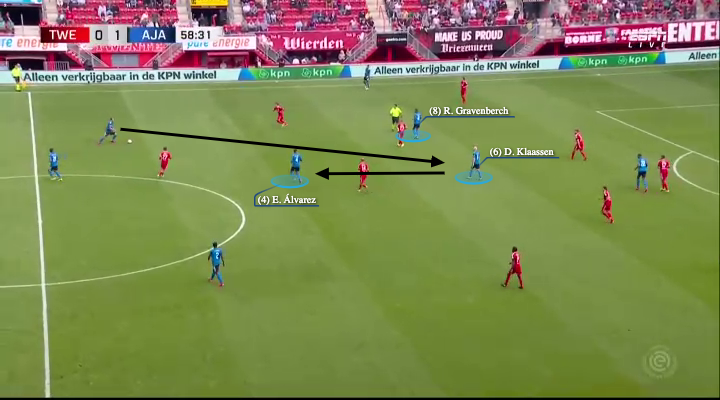 After spending years under Ten Hag, Álvarez developed a very good mindset on the basics of football — some simple things, such as optimal body orientation, the direction when scanning the pitch, using touches to dictate the tempo, but not many could have all these skill-sets.

In this example, we show how Álvarez combined his skill-sets to perform a vertical third man play with his teammates. The Mexican midfielder would not drop without purpose and when he wanted to fix the opposition, he stayed higher to offer space for the centre-backs to drive forward. You could see Álvarez facing the left side of the pitch initially — remember that, and we will discuss more in the next image.

In this case, Martínez carried the ball forward and found a player behind the second line (Davy Klaassen). 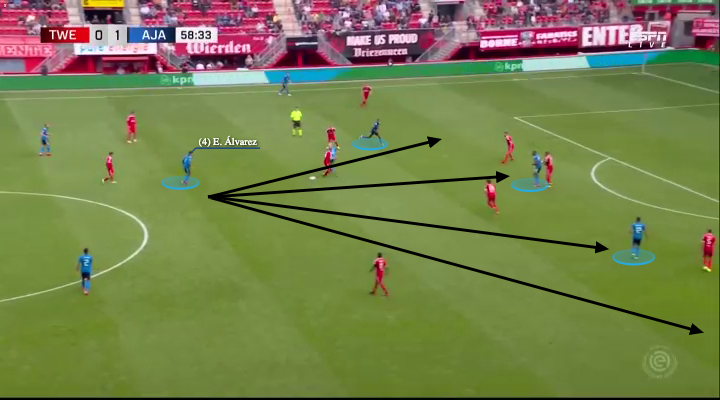 Compare that with Álvarez’s body orientation just a second later. When he became the third man receiver, before the ball arrived, he already repositioned his body to achieve an optimal angle for his next move. Now, he was facing the opposition goal, which allowed him to enjoy a wider angle of potential passes, giving him passing access to almost all players in each vertical zone.

Since the adjustment of his body angle was good, Ajax generated a great dynamic in the attack. The Mexican midfielder could play a chipped ball to the deep runner in the left half-space, go vertical to use the body strength of Haller, or switch the attacking focus to the right side; the opponent could only keep guessing. 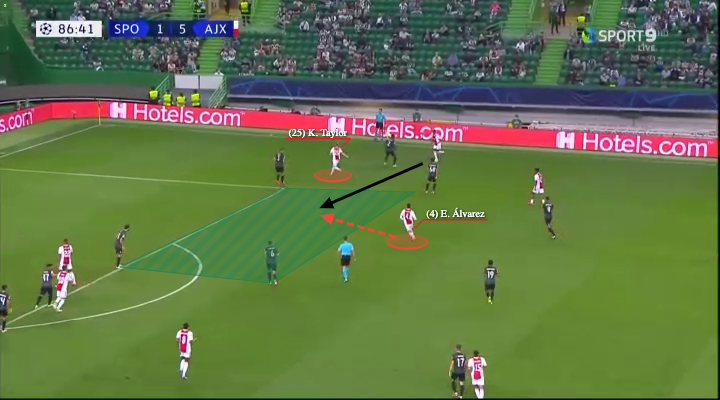 The last example of the section demonstrates Álvarez’s presence in higher spaces of the attack, but this space occupation awareness applies to all offensive phases. In this situation, Kenneth Taylor moved from the half-space to the wide zone, and now, the green space was vacated. It was just a very simple move by Álvarez to exploit that zone but it shows his awareness to operate in spaces and offer a passing option for teammates. Of course, he’s not the best player with imaginative creativity in the final third but the way he operates in spaces is very useful in constructing the attack.

Although we explained a lot of Álvarez’s strengths in the team’s attack, he offers more than that. Defensively, the Mexican midfielder has been an important part of Ten Hag’s system, as his good positional awareness can prevent his centre-backs from being exposed. 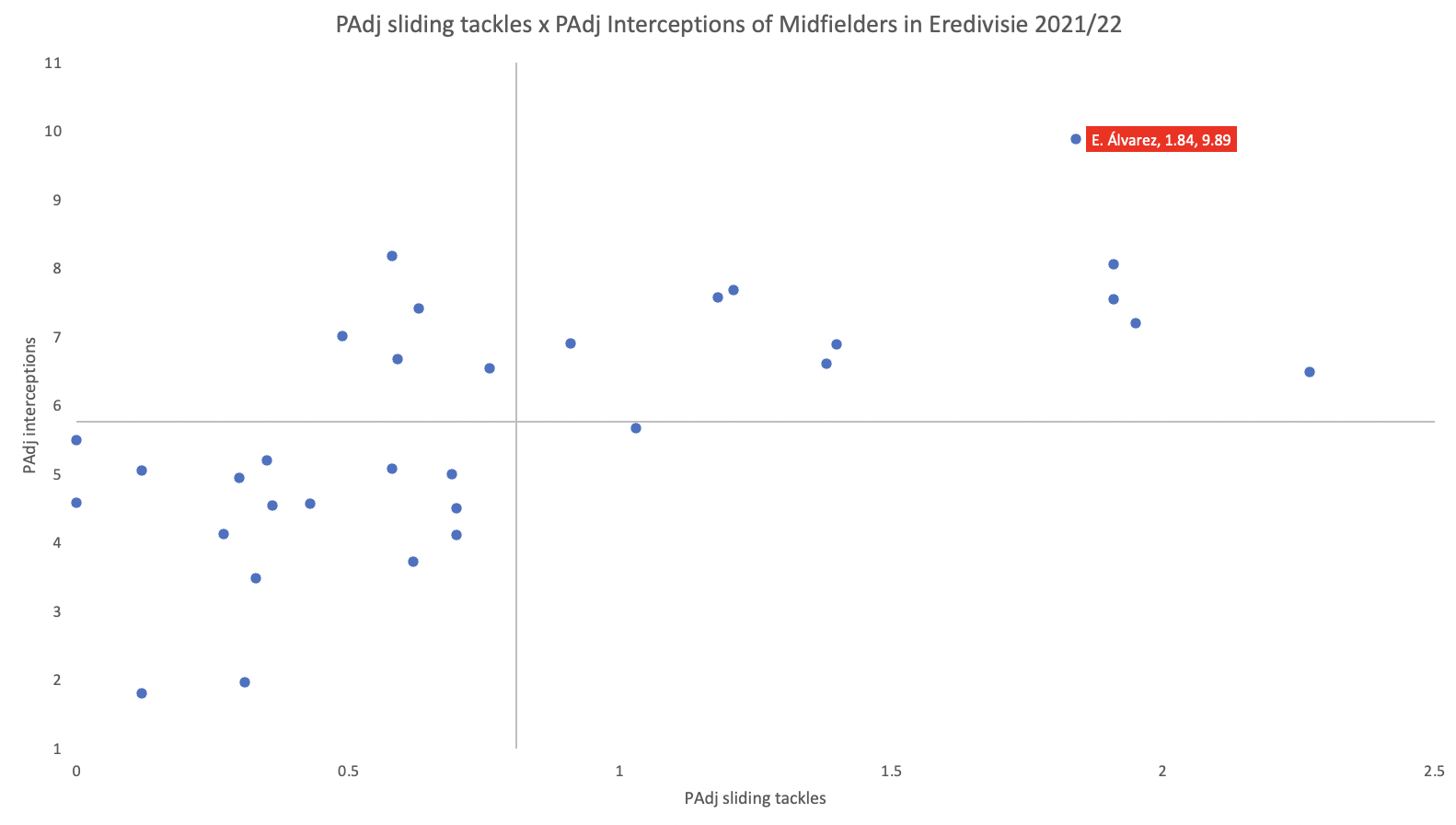 In terms of data, Álvarez was outstanding in several defensive metrics. The first scatter plot shows the PAdj sliding tackles and PAdj interceptions of Eredivisie midfielders this season. The 24-year-old Ajax midfielder had 1.84 PAdj sliding tackles, which ranked 5th among his peers, while his PAdj interceptions figure was even more impressive — 9.89 — far higher than the others. He was in the top-right quadrant, which shows his exceptional defensive ability compared to the others. 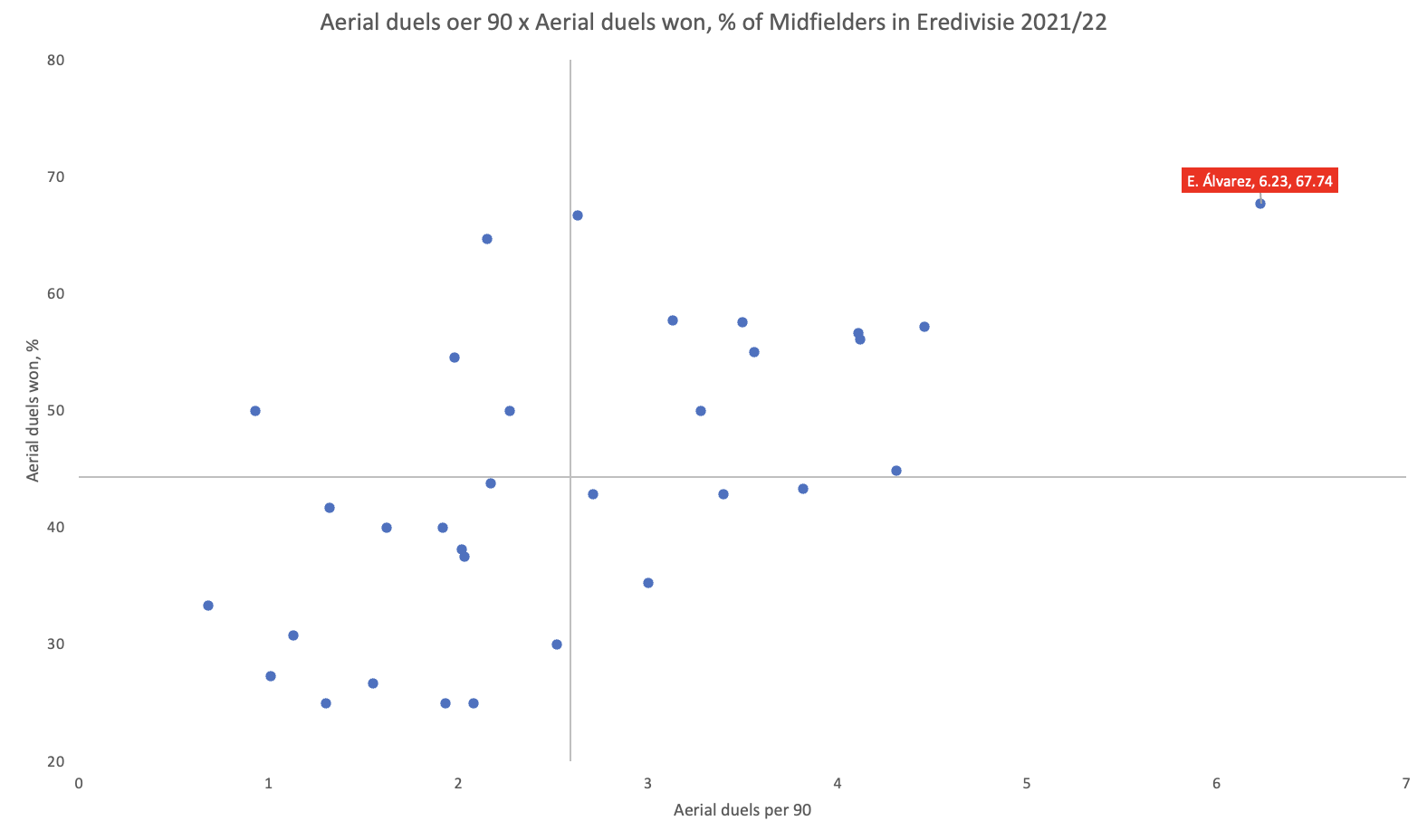 The other chart reflects the aerial abilities of Eredivisie midfielders, and Álvarez was outstanding again. He was alone on the top-right corner of the graph, with 6.23 aerial duels per 90 — far more than everyone else in the league. It shows the high frequency of aerial duels attempted by the player and it’s encouraging to see his very high success rate at 67.24%, which is also higher than any other midfielder in Eredivisie. Álvarez has really good aerial ability according to these metrics. 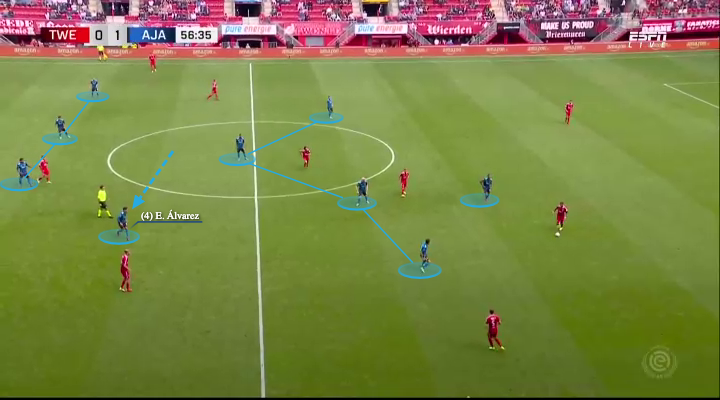 Apart from the defensive events that were representable by data, Álvarez also had great defensive awareness and skills to help his team. In this example against Twente, Ajax were defending in a 4-4-1-1/4-2-3-1 shape — the number did not matter greatly, as Álvarez usually remained deeper to cover everyone. That means the Mexican international must be able to anticipate the direction of the attack and choose an optimal position when his team is defending.

Here, Haller began the press with a run from the centre, which forced Twente to go sideways. Álvarez must initially dominate the central space instead of being dragged wide, so even as he spotted an opposition player in space on his right side, he stayed in the central corridor before the pass was made. 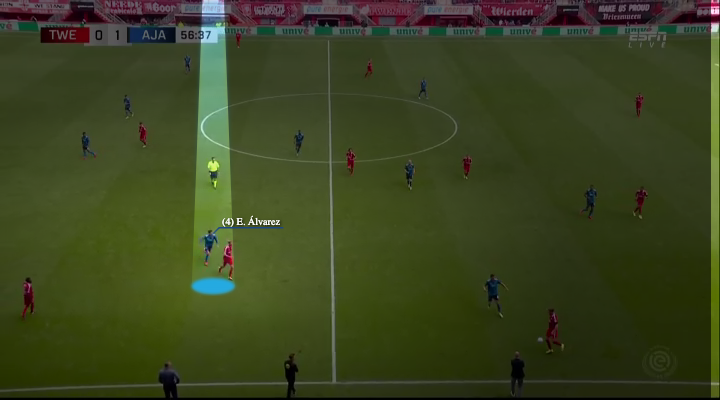 But when the pass came, Álvarez was well alert to speed up and access the receiver. You can also observe that his angle of the challenge was excellent. He slightly angled his run so he was on the blindside and the receiver could not realise where the challenge was coming from. In these situations, Álvarez is very aggressive to make challenges and initiate contact with the target. 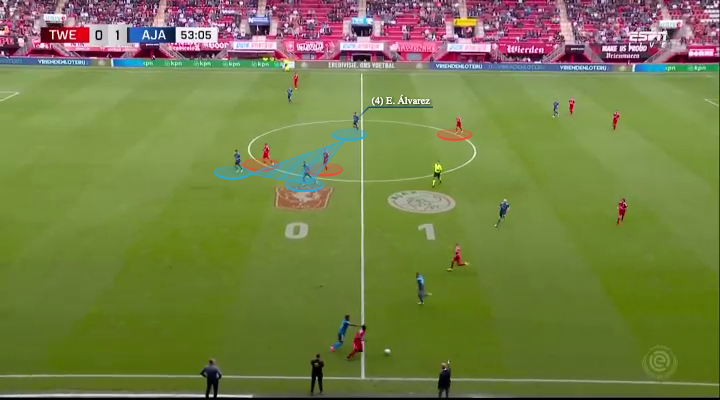 The holding midfielder role is a difficult role in modern football, as this player must have a very good game picture in his head. Under Ten Heg, Álvarez developed great awareness to balance the defensive structure with his positioning, so Ajax would not be isolated numerically in a specific region.

In this situation, Twente were attacking Ajax’s exposed defensive line. There were three players in the centre for each team (3v3) as we have highlighted, but the distribution of players was crucial. Since both Ajax centre-backs were occupied with an opposition player, they were easily isolated and separated by movements. Therefore, it was of the essence for Álvarez to move closer to his centre-backs instead of marking the player in midfield. The Mexican midfielder cleverly established a 3v2 numerical advantage at the back, so he could cover the centre-backs and give them greater freedom to mark the targets. 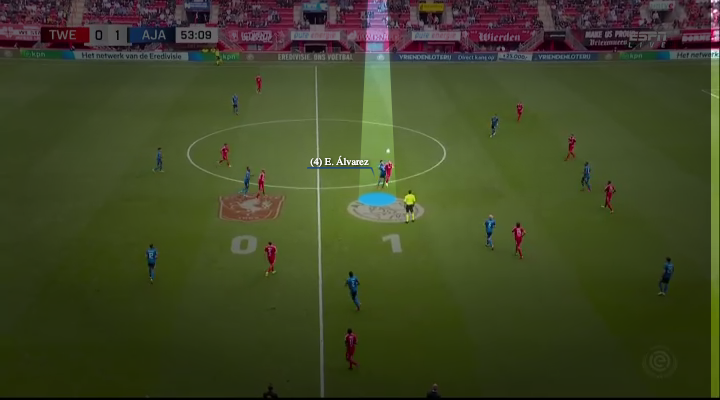 But then, Twente went back, and the ball eventually went into the air centrally. Álvarez did not hide at the back because of his initial position. Instead, he proactively sprinted out and attempted an aerial duel. This was a reflection of his great spatial awareness, as even though he dropped back initially, he knew which spaces to cover in different moments, so he could act according to the situation. 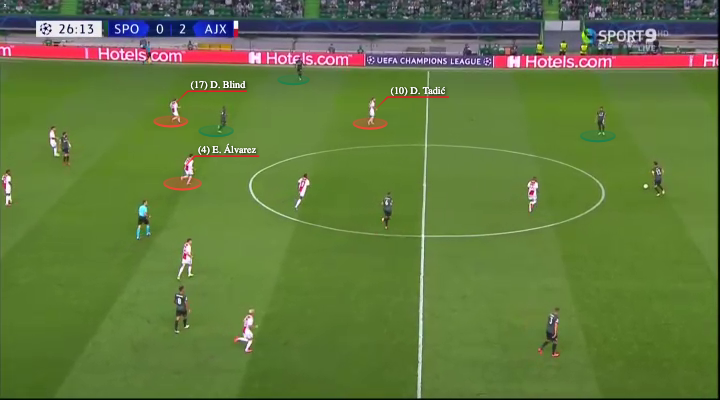 This scenario against Sporting CP provides another example of Álvarez’s great positional awareness to balance the structure. The opposition were invited to attack from the flanks by Haller’s body angle during the press.

There was a potential problem. If Dušan Tadić was taken away by the right centre-back, then Daley Blind would be left in a 2v1 situation as the opponents had two players there, which is why Álvarez must be able to anticipate the potential danger and move to help his teammates, though the Mexican international was in the centre initially. 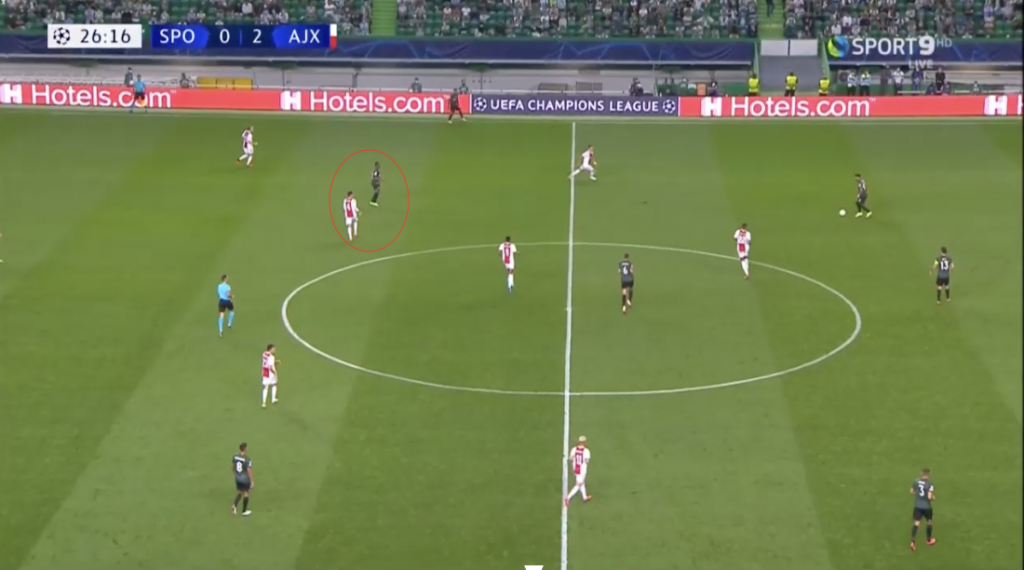 When Tadić pressed, you could see Álvarez was already in the left half-space to control that Sporting midfielder, so Blind could focus on the right wing-back. Ajax changed it from a 2v3 to a 3v3 on the left side, all thanks to Álvarez’s game intelligence and defensive positioning. With that move, they made sure there was no free player around the ball for progression. 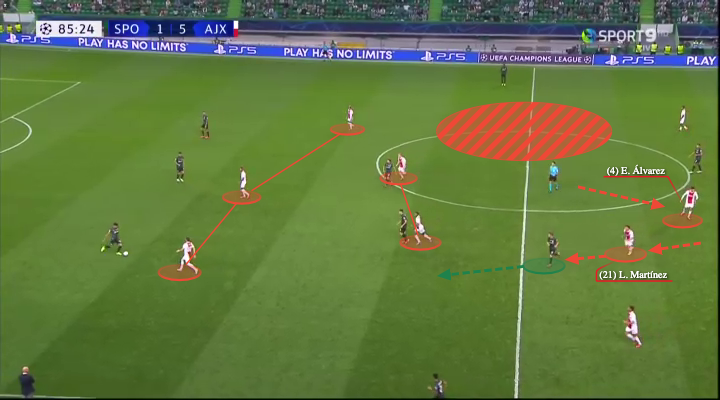 The last example shows Álvarez’s ability to cover in an alternative case. Sporting were playing with a 3-2 structure in the construction, which was matched by Ajax’s 4-1-2-3 defensive shape. When the opposition winger dropped into the half-space, Martínez responded by moving out to press, which would leave a gap in the last line. In such a case, Álvarez was smart to drop back to cover that space, rather than look at the other half-space (red zone). The centre-back was braver to press knowing that behind him, there would be cover in the form of Álvarez.

This analysis detailed the abilities of Álvarez. The 24-year-old Mexican midfielder should be an exciting prospect in the transfer market very soon, given his great understanding of the game, aggressiveness, defensive skills, and football intelligence. In an era in which teams are looking for reliable holding midfielders, he has the potential to join some of the biggest clubs in the world.