Eredivisie 2018/2019 Tactical Analysis: Matthijs de Ligt at Ajax and could he fit into Sarri’s Juventus?

It is the end of an era for Juventus as the five consecutive title-winning manager Massimiliano Allegri will no longer lead the team. The club board decided that after five successful years with the Italian specialist, they want to see the club go in a different direction.

They won it all in Italy, but it seems that the few disappointing Champions League campaigns took the lead and resulted in a managerial switch.

There were some controversial opinions on the team’s new head coach Maurizio Sarri following his inconsistent first Premier League season coaching Chelsea. He had some ups and downs but luckily, the Blues ended the season at the top, winning the Europa League and securing Champions League football for next season.

This has surely affected the decision on Juventus’ next manager, as the club recognized Allegri’s replacement in him.

This raised a lot of questions on what’s going to be the team’s tactical approach, how is he going to implement his Sarriball philosophy, and is he good enough to keep them at the highest level.

The transfer window is another matter that’s been discussed since his appointment since there are no signs of the Black and Whites being active out there. Even though there is one certain player that is heavily linked with the club and might be just enough for them to dominate once again.

One of the most talked about young talents Matthijs de Ligt is said to have agreed on terms with the Bianconerri. He created wonders as Ajax’s captain and played a huge part of their title-winning campaign. De Ligt has shown what he is capable of and might turn out to be the perfect replacement for Giorgio Chiellini or Leonardo Bonucci as they enter the twilight of their career.

They are the key figures for Juve’s defensive achievements and the team needs to start looking for replacements so the transition can be smooth and successful.

But how in fact, can the Dutch centre-back impact the teams’ performance and integrate with his teammates-to-be?

This tactical analysis will look into how Sarri could use De Ligt’s strengths in order to secure a strong performance in his first season on board.

Some of the most valued qualities in the players are their mentality and attitude. Fitting to a new club at such a young age and managing to implicate the manager’s vision and tactics means a player needs to be calm, confident and respectful. De Ligt is only 19 years old but has shown a maturity beyond his age. Being a leading figure for his teammates and showing impressively strong decision-making has brought him under the spotlight and made him fans’ favourite.

In the last few years, this leading figure for Juventus has been Chiellini. The 34-year-old is one of the reasons for the outstanding defensive performance Juventus pull out. His presence is immensely important, but it is unlikely that he has many more active seasons ahead of him. Allegri already started the transition experimenting with different back lines throughout the season.

Due to Andrea Barzagli’s departure, Sarri might not have the opportunity to rotate the players frequently enough and yet have a solid defensive line. No matter his age, De Ligt seems like the only realistic option to replace Barzagli now and Chiellini in the future, showing the same strong mentality.

Although he is a centre-back, his role is much more expanded and colourful. The youngster has shown an outstanding ability to find the balance in his performance. Not only he brings solidity to Ajax’s back line, but he also has a great contribution to their offensive actions.

His positioning is on a very high level and not only does he manage to quickly transition defensively but he is also aware of his teammates’ positioning and takes responsibility to cover them whenever they happen to be out of position.

This could be extremely helpful in the later stages of Juventus’ games as Bonucci and Chiellini often get tired which leads to some individual mistakes. This extra support from De Ligt could help in closing newly opened gaps.

The Dutchman is extremely important for gaining back possession and providing the ball to more advanced areas. With his 11.67 recoveries on average per 90 minutes, he manages to take control and slow down the tempo when the team is under pressure.

His ability to win the ball back inside the box, while making minimal contact showcases Matthijs’ tackling ability and is a great example of how to get the possession back without risking giving away a penalty kick.

His height is also key for his performance, especially when defending set pieces. With his 1.89 m, he often takes on his opponents and wins his aerial duels.

Although the youngster tries to go up the pitch he always keeps an eye of his position and goes back there precisely. Hight defensive line

He likes to keep things simple, although he is one of the best passers among the Eredivisie’s defenders.

He averaged a pass completion rate of more than 91.6% last season which makes him a perfect fit to Juventus, especially having in mind Sarri prefers possession football. De Ligt might be the needed support to the pivot of Miralem Pjanic as he could help with the build-up. His intelligent positioning and passing abilities might allow Pjanic to offer more in advanced areas instead of staying in the defensive midfield role most of the time.

The graphic above shows De Ligt’s passes in the 4:1 win over De Graafschap. He ended the game with an impressive 95% pass accuracy and as it could be seen he covered wide areas. As already mentioned his role goes further.

As seen in the graphic below, he is equally important in all phases of the game, which gives more freedom to his teammates’ actions. That is one of the reasons Ajax’s style of play is so attractive.

Matthijs is used to help to the midfield too where he contributes with some long balls and great passing skills.

It’s hard to predict what Sarri’s “go-to” formation would be. But there are definitely a couple of schemes that De Ligt could be used perfectly in.

He could be equally useful in both 3-5-2 and 4-1-3-2. Juventus haven’t played their best games when using a back three, but with the 19-year-old in the squad, this might change.

Using Alex Sandro and Joao Cancelo as wing-backs and having a solid three of De Ligt – Bonucci – Chiellini might work perfectly for Juve. Starting the attacks from the back using the more experienced players and positioning De Ligt slightly forward in order to distribute the ball either to the wing-backs or Pjanic, might change the dynamics of the game and allow the team to keep the ball in the opposition’s half for long periods of time.

Using him in a 4-1-3-2/ 4-1-2-3 formation out of possession and then transforming to a two-man backline might work out too. The full-backs would be able to give additional support up front, relying on De Ligt’s control and strong decision-making for covering their own half.

He received praise from the Bianconerri’s ex-coach Fabio Capello too:

“If Juve signs De Ligt then it’s over. Again. And we go directly to the season after. He is the best defender out there. He allows you to defend with two, freeing up the full-backs” 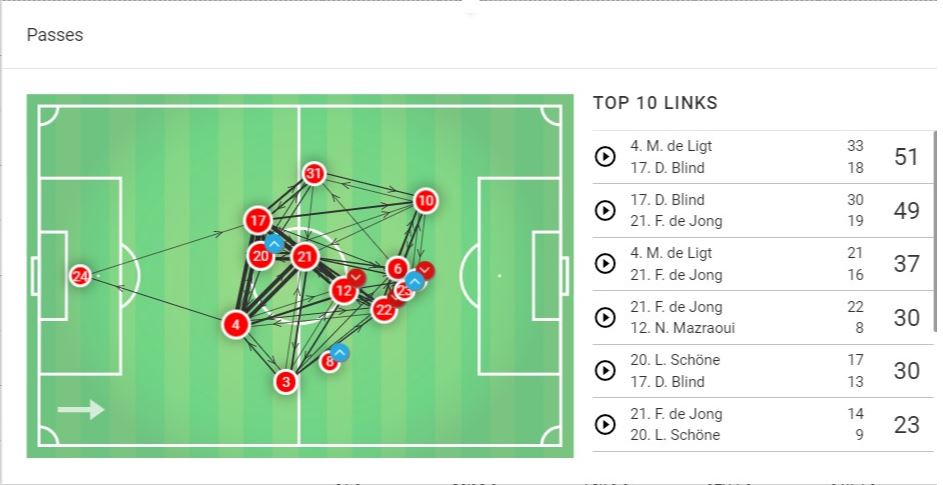 The pass map above indicates Ajax’s top passing links against Utrecht. De Ligt is involved in most of the team passes, which is exactly the right way to use him. His control is extremely important, especially when the defensive line is highly positioned as there is no room for mistakes.

He could be used when taking set-pieces too due to his height and aerial abilities.

Maurizio Sarri needs a perfectly clear game plan in order to keep up the good work. Through the analysis, we can safely assume Sarri will bring a different approach from what we’ve seen from Juventus in the last few years. He needs to make sure he makes the right moves and requests the right transfers in order to not only challenge the Serie A title again but also reach the ultimate goal – a Champions League trophy.

De Ligt gained irreplaceable experience in this year’s competition with Ajax, showing an outstanding performance against one of the best European teams. Despite being so young he looks completely ready to conquer the top and Juventus might be the perfect place to do it.