The quarterfinals of the 2019 FIFA Women’s World Cup are on. In Rennes, Germany will face Sweden in what will be a close match between two strong sides. Having eliminated Canada in the round-of-16, Sweden are confident to reach the semi-finals. But Germany also seek their next world championship after 2003 and 2007, playing a flawless tournament so far. In the round-of-16, they were able to beat Nigeria 3-0. In the semi-finals, the winner of the game between Italy and the Netherlands will have to wait, but before that, Germany and Sweden both have a difficult task to face. This tactical preview analysis will point out key aspects for both teams and show why there is no clear favourite.

On 6 April, Sweden and Germany played a friendly in Goteborg in order to prepare for the world cup. Germany won that game 2-1, but it is highly doubtful that either team will use a line-up that is similar to the one they used in that particular game. While both teams played with a back three in that game, none tried this again during the world cup. Obviously, they tried out new things while confusing the opponent, but neither will use such a formation in this game.

We expect Sweden to stick to the 4-2-3-1 system, which worked fine for them. Stina Blackstenius should start once again after scoring the decisive goal against Canada, so Anna Anvegard will probably be a joker from the bench again.

Martina Voss-Tecklenburg announced that her best player, Dzsenifer Marozsán, is available for the game. Marozsán suffered from an injury after the game against China, missing three games. However, it may be too big of a risk to start her. Also, her teammates did such a good job in the past games that there shouldn’t be any changes in the starting XI.

Germany will try to neutralise Seger

Even though we expect both teams to use a different formation than in their previous encounter, some tactical measures may be repeated. In that encounter, Germany concentrated on neutralising Caroline Seger, who without a doubt is vital for Sweden’s build-up and possession game. 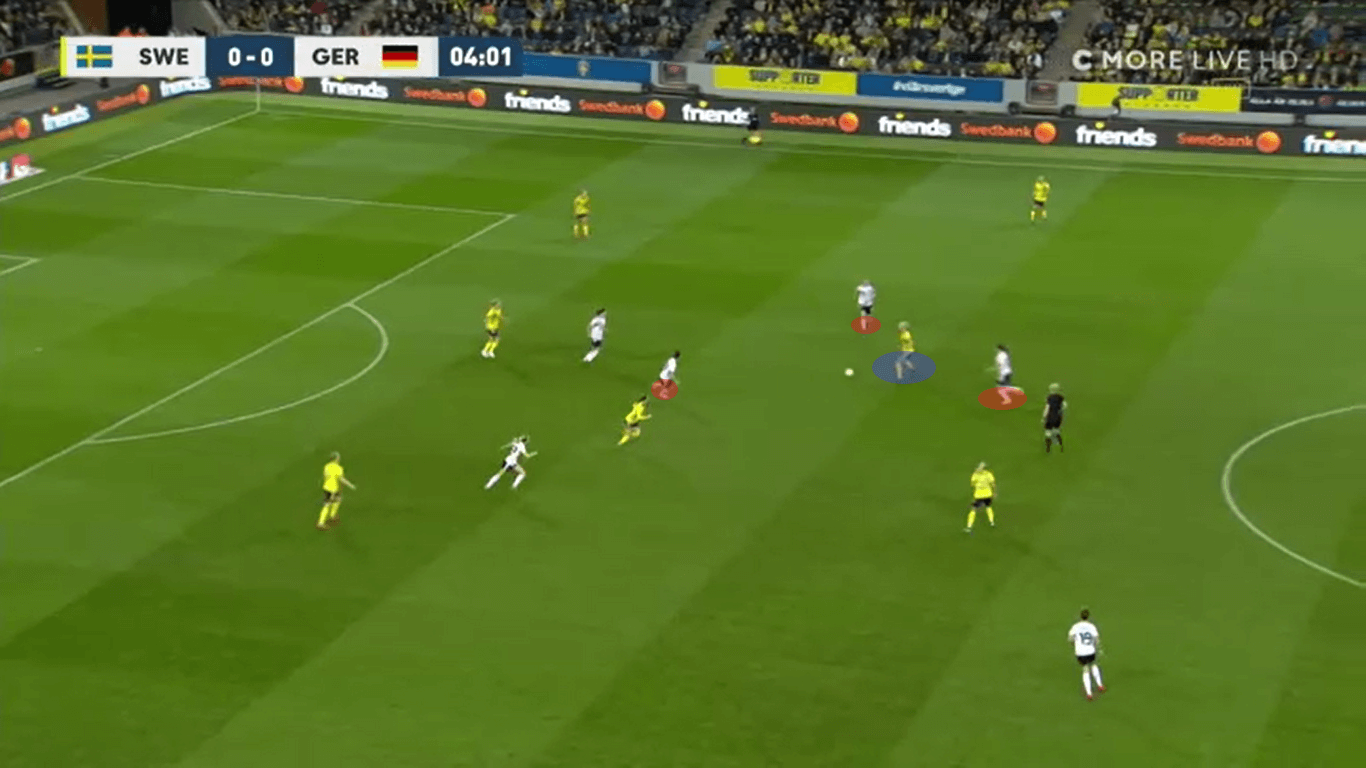 Here, we see Seger receiving the ball in the build-up. As her face is turned against her target, Germany reach their main goal and don’t let her facilitate the attack thanks to an open body position when controlling the ball. Second of all, Germany try to press Seger immediately from all angles. Three German players attack her from three different directions, making it difficult to find an appropriate solution. 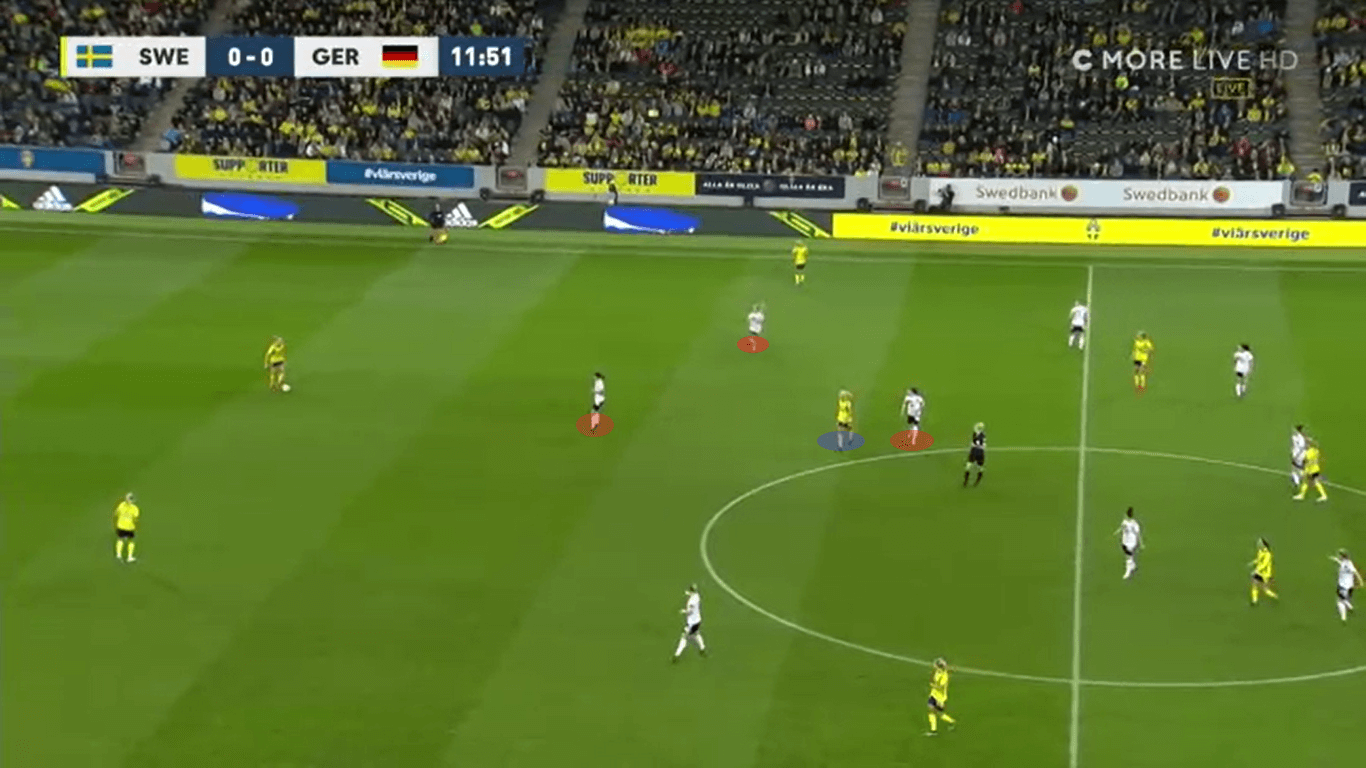 Later on, it became obvious that Germany even took it a step further by not letting Sweden pass the ball to Seger in the first place. While the centre-backs were allowed to maintain and pass the ball without any pressure, passes to Seger became more and more difficult. Germany’s attackers focussed on keeping Seger in their cover shadow, while the German midfielders moved forward to mark Seger tightly nonetheless. 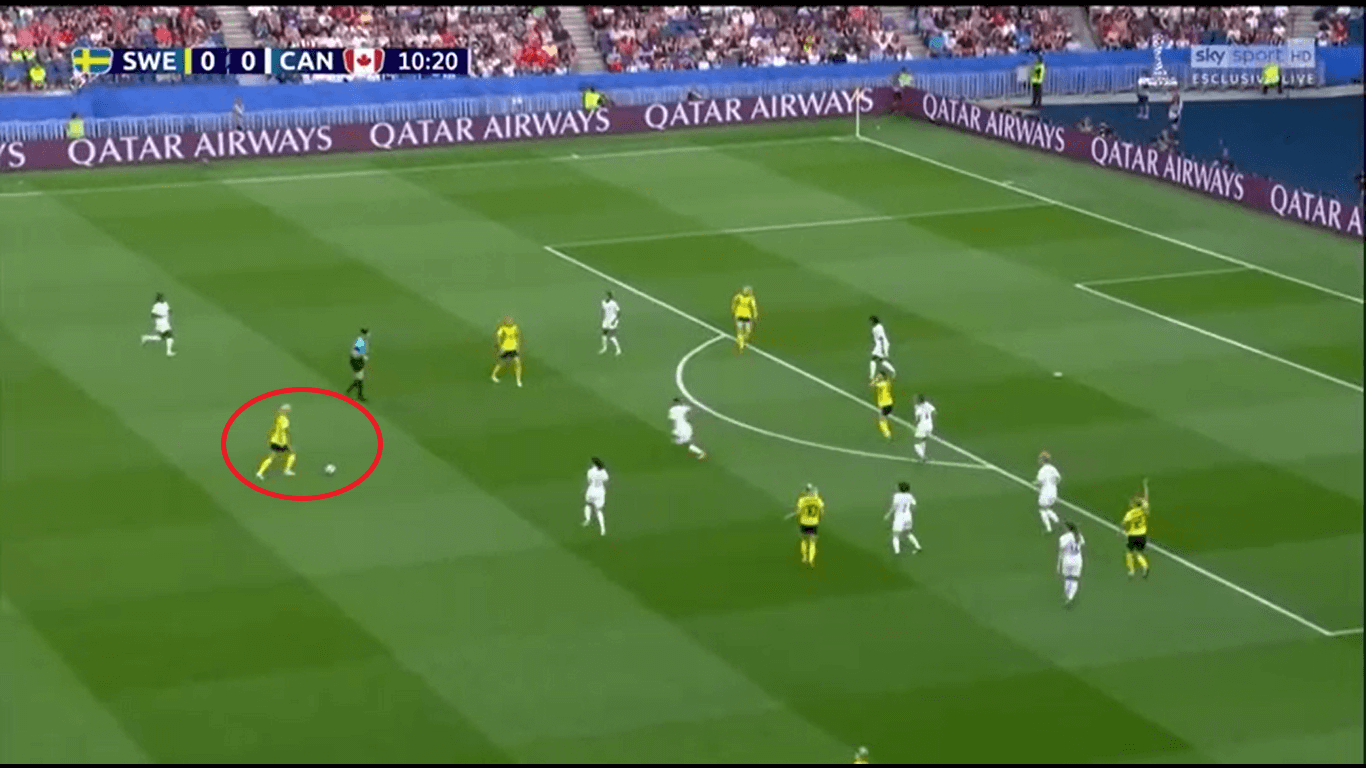 Against Sweden, Seger demonstrated why it is important to take her out of the game. In this situation, she has far too much space. Thanks to her great individual skills, she is able to recognize the open vertical passing channel into the box and play the ball precisely into her teammates’ foot. She creates a great scoring opportunity like she often does when you let her play. For Germany, restricting Seger’s influence will be the key to win the game.

Sweden have great individual quality offensively with players like Kosovare Asllani, Stina Blackstenius, Sofia Jakobsson or Fridolina Rolfo. Either some individual actions or set-pieces may give them scoring opportunities. Their defensive performance, however, will be decisive. Restricting possession losses in order to minimize dangerous counterattacks may be one of key aspects to look out for. There were quite a few games, where Sweden’s counter-press did not function well, so they ran into counterattacks. 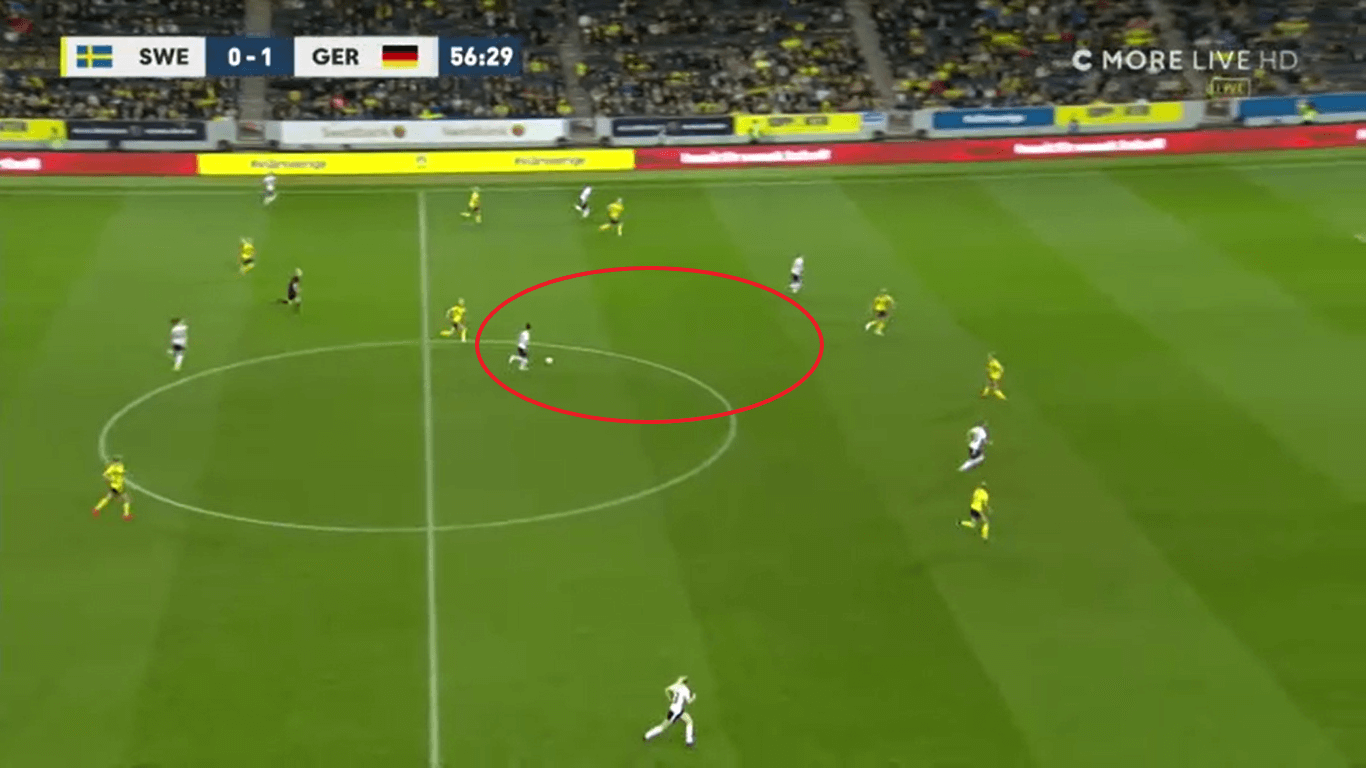 One example can be seen here. Germany were able to outplay the counter-press of Sweden rather easily and expose the opponent’s midfield. With so much space in such a dangerous area, it is clear that a dangerous situation arises. The German attackers also make intelligent runs, as they use the gap between two defenders, eliminating the possibility for the defenders to move out. Against such high-quality opponents, Sweden should better not risk anything and let situations like this one happen too often. 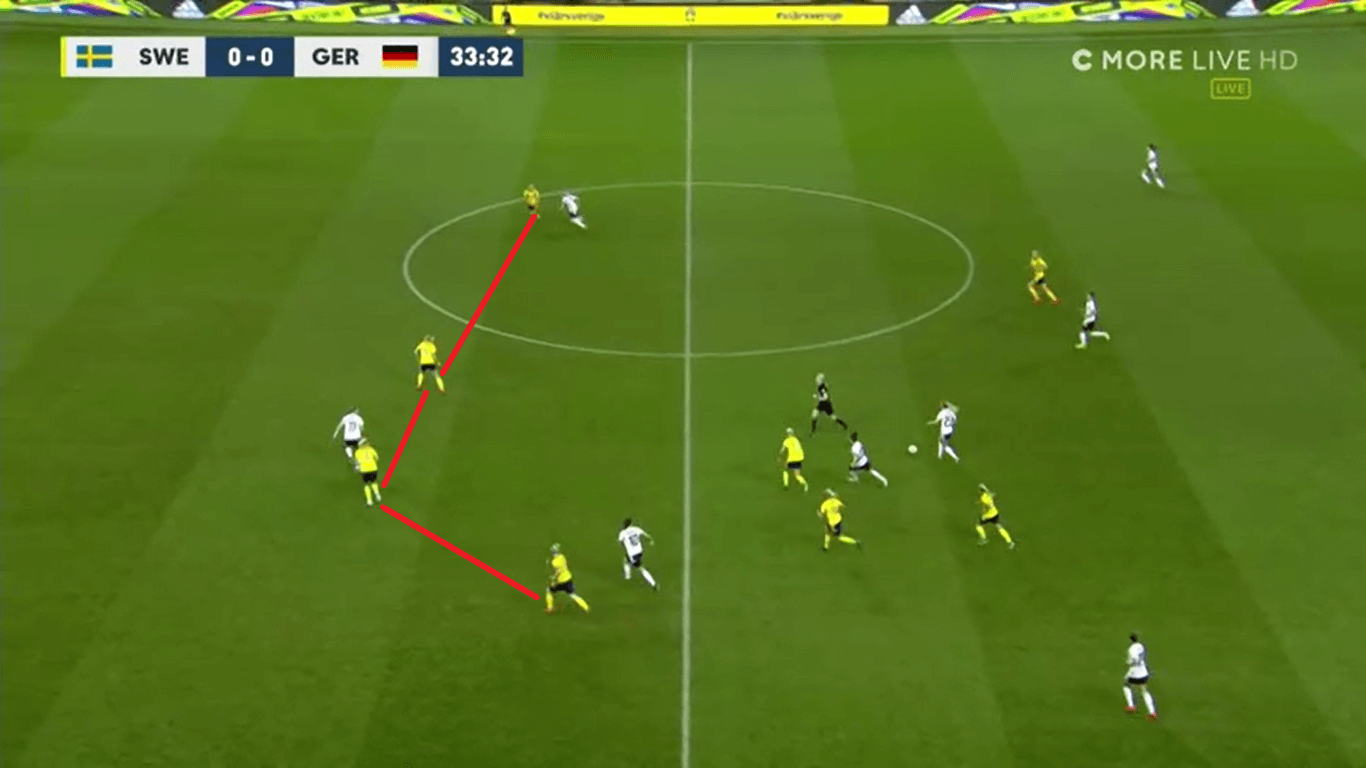 Also, as Sweden like to use their backline high, pressure on the ball at any time is important. Even though there is not much open space in the midfield, unlike in the previous image, the situation is still dangerous. There is a lot of space behind the backline, with two German attackers ready to make a run in there. When there is no pressure on the ball, Germany may very well be able to exploit such situations. 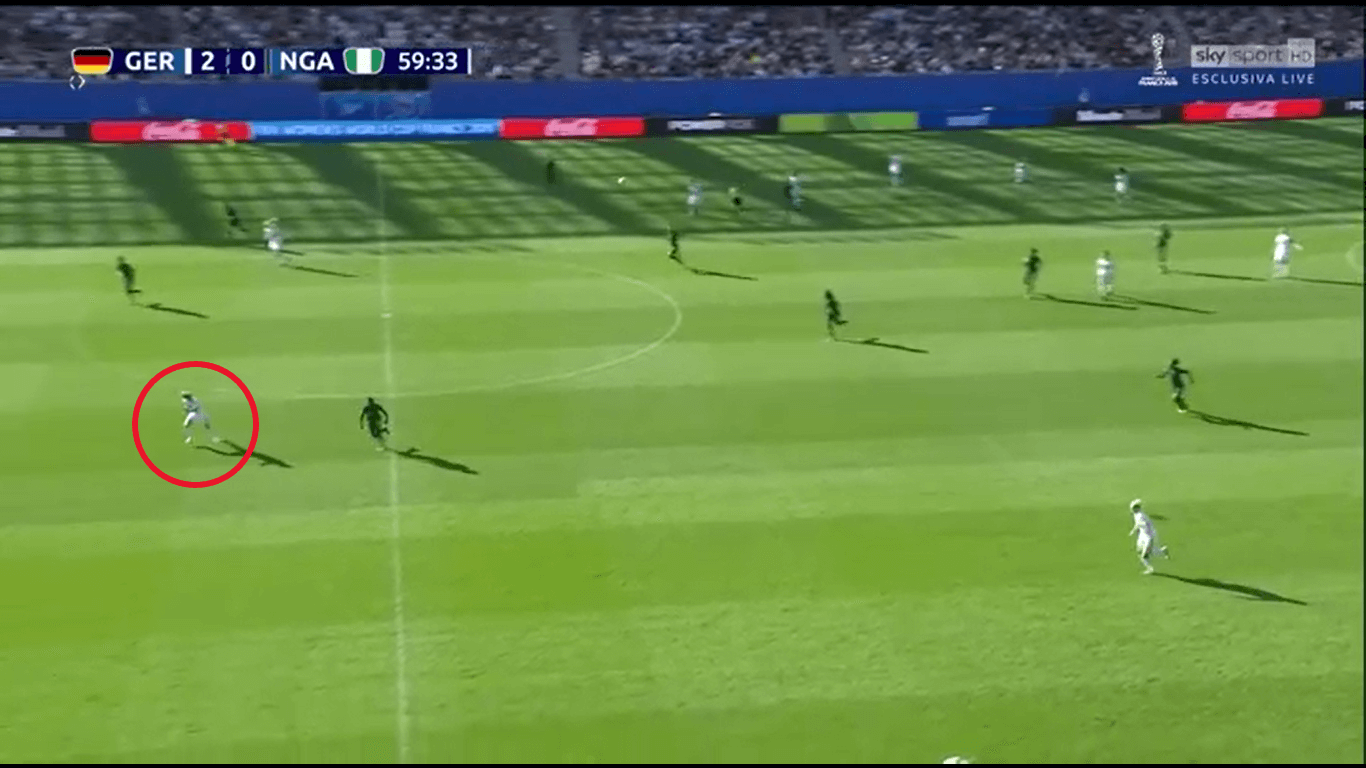 Against Nigeria, Germany also tried such runs behind the backline. Long balls to their attackers seemed like a good strategy for them, and this may very well be the case against Sweden. Of course, Germany are also able to adapt their positional structure, if they decide that long balls may be the way to go.

Against Nigeria, Germany were not interested in building up patiently with short passes, but rather played long balls. 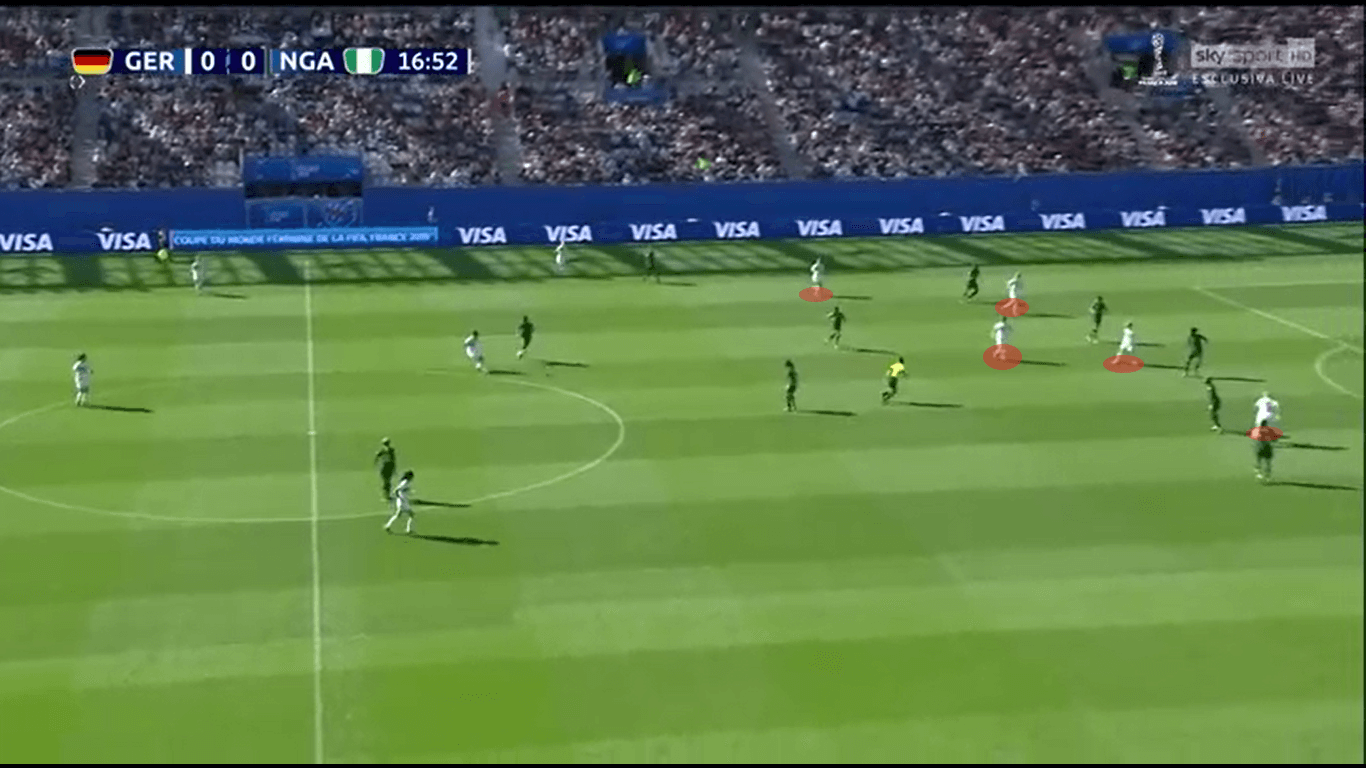 As we can see here, they overloaded some areas of the pitch and played a high, long ball into those areas. If they controlled the ball there, they had some passing options nearby. If not, they were able to immediately press and go for the second ball. Either way, dangerous moments occurred. Nigeria seemed surprised by that approach but tried their best to prevent such passes by putting pressure on the ball. Sweden for sure need to do that more aggressively and more coordinated, if Germany uses such an approach again. 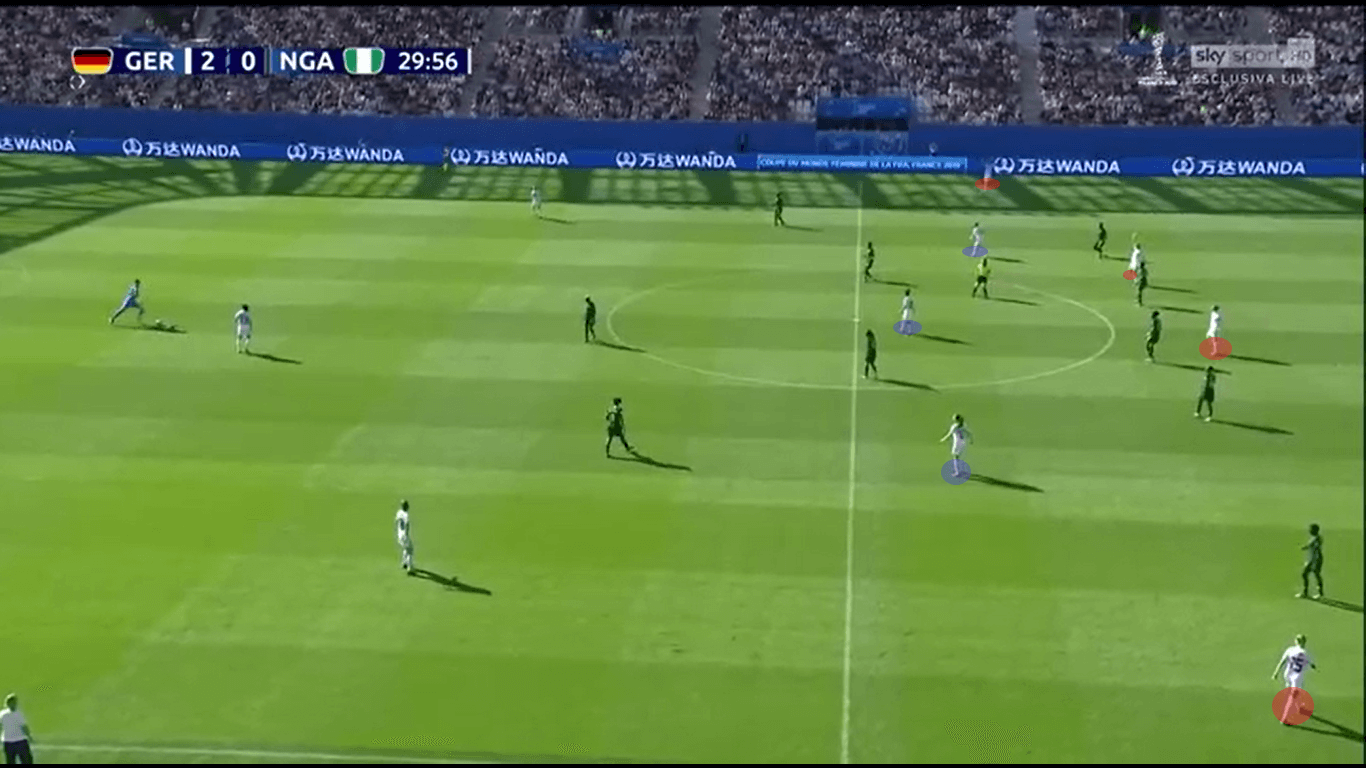 When Nigeria tried to move forward instead of defending deep, four German players pinned down the backline, while three players occupied the space between the lines. For Nigeria’s backline, this was too much to handle. However, a situational back five like in this image by Nigeria may make sense in order to defend the whole width of the pitch. 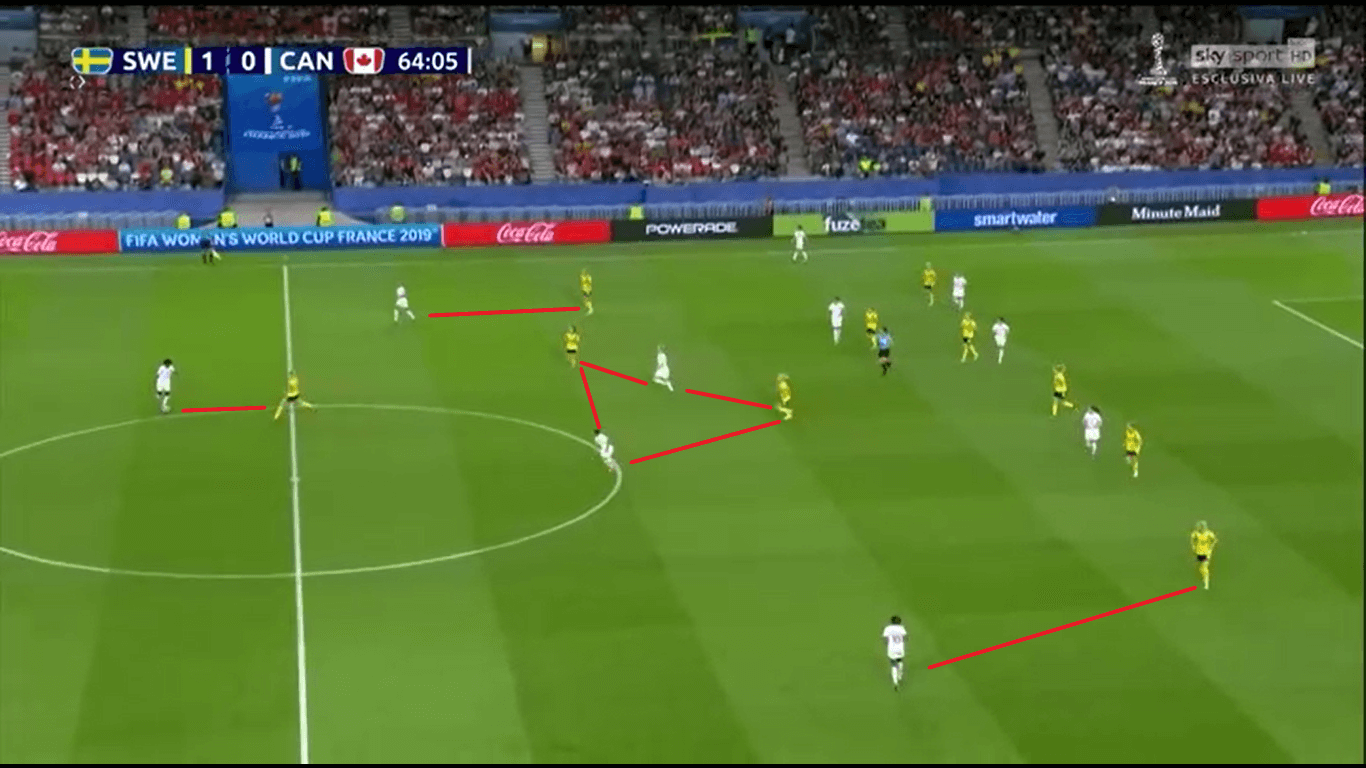 Sweden did this against Canada successfully, where they would also defend deep when necessary and expand to a back five occasionally. In certain situations, when the opportunity presented, Blackstenius up-front would attack the opponent, which was interpreted by the whole team as a sign to press. In those cases, a man-marking approach proved to work fine for Sweden. 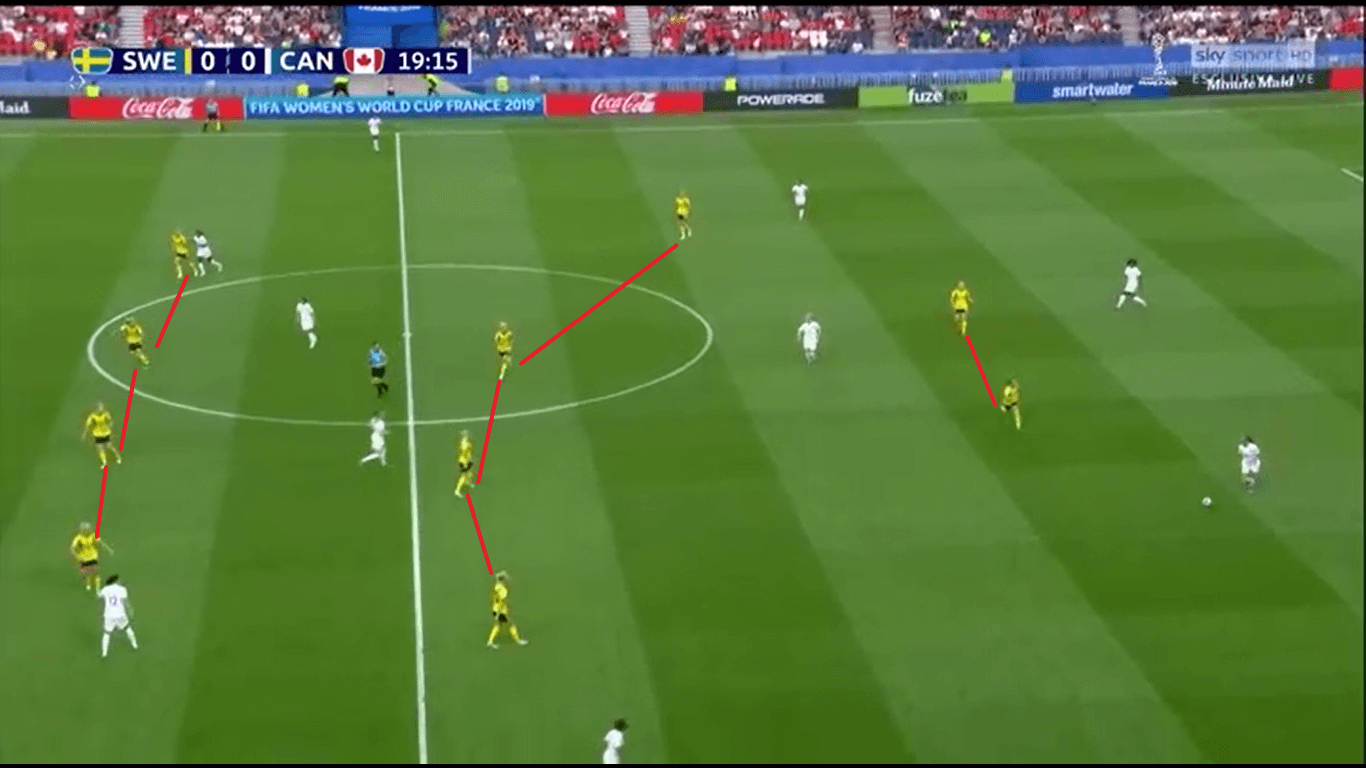 Other than that, they mostly focussed on defending in a tight, compact 4-4-2 shape. Without being too deep down with the last line, they were able to defend properly. If Germany try to overload the final third again and rely on high, long passes, it will be interesting whether Sweden will stick to their way or whether they will defend deeper. Either way, it will be interesting to see.

This tactical analysis of Germany vs Sweden showed that the game will for sure be decided by small details, like so many games in this stage of the tournament. There is no clear favourite in this matchup. A lot will depend on how well Sweden can defend and how well they can limit mistakes in the possession game. For Germany, the main focus should be on limiting Seger’s influence. Germany will for sure try to press Sweden aggressively and provoke mistakes in order to exploit Sweden’s weaknesses in defensive transition. If they are able to do so, they have a good chance of advancing to the semi-finals.