The round of 16 of the FIFA Women’s World Cup has already seen no shortage of drama. Australia crashed out of the tournament against Norway as Sam Kerr missed on her penalty kick, VAR reared its controversial head in the England vs. Cameroon match, and the host’s captain, Amandine Henry, scored a goal in extra time to lead France to victory over Brazil. This Sweden vs. Canada match continued that trend. Sweden defeated Canada 1-0 in a defensively stout match at Parc des Princes in Paris, as only Stina Blackstenius’ first career World Cup goal could separate the sides. This tactical analysis will explain how the Blågult overcame the Canadians preemptive attacks and advanced to the quarterfinals. 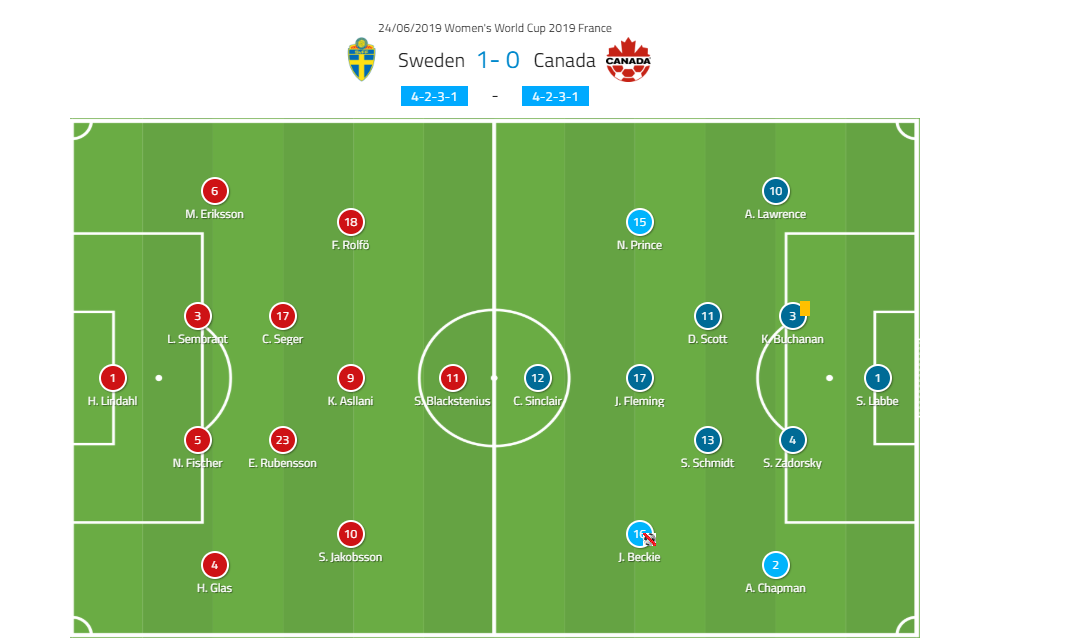 Sweden’s manager Peter Gerhardsson returned his squad to the projected eleven heading into the tournament. Hanna Glas, Nilla Fischer, and Magdalena Eriksson returned to the back line next to Linda Sembrant after beginning on the bench against the United States in round three of the group stage. Elin Rubensson and Fridolina Rolfö also returned to the starting lineup. The core four of captain Caroline Seger, Sofia Jakobsson, Kosovare Asllani, and Stina Blackstenius continued in their preferred positions.

Canada lined up in manager Kenneth Heiner-Moller’s preferred 4-4-2 with the same starting eleven from the first group stage match against Cameroon, in which Canada won 1-0. Centre-backs Kadeisha Buchanan and Shelina Zadorsky have been critical to Canada’s defensive success this World Cup, allowing only two goals, both from the Netherlands, in the group stage. Desiree Scott and Sophie Schmidt were deployed as the central midfielders, with Janine Beckie and Nichelle Prince out wide. Strikers Jessie Fleming and Christine Sinclair make for a formidable front two, as both are capable of dropping back to receive the ball or push forward with ease.

Canada began the match on the front foot. They consistently held possession of the ball in Sweden’s half and pressed enough in midfield to regain possession when they lost it. With Sweden in a mid- to low-block, Heiner-Moller’s side planned to exploit the wide areas- the space that is frequently available when playing against a low block- using long attacks into those areas. There were a number of times, especially early in the match, in which Canada were successful at reaching these spaces.

Below is a quality example of how Canada were able to bypass Sweden’s defensive block.

In this attack, Canada begin with the ball at the back. Asllani, in the 10 position, presses the back-pass while at the same time effectively eliminating a pass centrally to her marker, Scott. This forward movement from Asllani and the right winger Jakobsson gives Schmidt, the other Canadian central midfielder, space to drop into.

Schmidt receives the ball in the space, but consistent pressure from Rubensson forces the Canadian to drop back with the ball and eventually restart the ball from the back line.

This movement results in a new formation from Sweden, arguably showing a small part of the Scandinavian side’s tactical versatility. Now in a 4-3-3, Sweden’s midfield and forward lines are higher up the pitch and more compact than in the 4-2-3-1. Sinclair drops into space previously left by Schmidt (besides the Swedish midfield line) and receives a pass from the midfielder.

With Sinclair’s backward movement, Beckie also drops down briefly from the wide area to provide an outlet to her teammate. This forces her marker, Glas, to follow. Beckie then quickly turns and makes a run down the left touchline, successfully catching Glas out of position too high up the pitch. Sinclair makes a pass over the Swedish back four, and the play results in a corner kick for Canada.

Sweden, however, were, for a majority of Canada’s attacks, well prepared. The positioning of the back line was excellent throughout the match, and Canada were ultimately unable to penetrate due to a couple of reasons.

In this sequence, Beckie leads an attack, and switches play with a long ball to Ashley Lawrence down the right. Canada, however, were slightly too late on the speed of their attacks, and consistently gave Sweden time to set up defensively.

Lawrence then attempts a switch of playback over to Fleming, but Glas had enough time to read the play. Sweden’s backline and midfield organised themselves and formed a disciplined low block. Glas headered the ball away.

After defending an attack by Canada, Sweden were then able to use Canada’s positioning to their advantage. Gerhardsson’s side were able to find space behind Canada’s forward possession, and this resulted in a number of dangerous counter-attacks.

As you can see in the figure above, once an attack initiated a counter-attack, Sweden’s front four stormed forward. Notice the swathes of space around Canada’s back two lines. Blackstenius’ movement in which she faded outside before cutting centrally inside the two centre-backs could’ve resulted in a quality chance had Jakobsson’s cross not been blocked out for a corner.

It was this style of attack which eventually resulted in the lone goal of the match.

With the team positioned in a defensive block, Rubensson is able to intercept an errant pass by Beckie with the help of pressure by Rolfö.

Sweden immediately go on a counter-attack, as Rubensson hits a nice, accurate pass to Asllani on a run. Blackstenius also begins to burst forward towards goal.

With Asllani, Blackstenius, and even Jakobsson flying forward, Sweden have ample space to exploit. Blackstenius makes an intelligent run to keep herself onside, and the creative Asllani completes a stellar pass around the defender’s run and into Blackstenius’ path. Sweden went up 1-0.

Arguably the play of the match, however, goes to Swedish keeper Hedvig Lindahl. Despite staying on the bench for much of last season at Chelsea, the only two-time Diamantbollen winner on the 23-woman roster has proven time and time again that she is Sweden’s best choice in goal. She reaffirmed her ability yesterday by making a crucial penalty save against Beckie at the far right corner of the net in the 69thminute. If Lindahl continues to perform behind the back four wall led by veteran Nilla Fischer, there’s no telling how far this defensive setup could take Sweden.

As stated, Canada controlled the ball for a majority of the match, with 59% possession. This, of course, does not mean Canada controlled the match. The concept of dictating the play and flow of the game without having the ball may initially sound difficult to grasp, but when executed well and clearly disciplined, the tactics Sweden utilised were textbook.

For example, Sweden were able to advance the ball on counters down the wings, with Jakobsson and Rolfö both completing 100% of their dribbles; four and three respectively. They were also very firm defensively. Canada took 11 shots, but, largely thanks to Sweden’s positioning in their own defensive third, only one was on target; four were blocked. These are just a few examples of how not possessing the ball does not necessarily mean a team is not controlling the match.

Despite the quality of the opponent, this match still feels like a disappointment for Canada. Reaching the quarterfinals as hosts in 2015 proved the country’s women’s program was quickly progressing. Despite this likely being Christine Sinclair’s last ever World Cup, Canada are expected to continue that trend on the feet of players such as Janine Beckie, Jessie Fleming, and Kadeisha Buchanan.

Sweden meanwhile will face Germany in the quarterfinals at Roazhon Park, in Rennes. The Blågult are no stranger to this stage, having reached it five times, the latest being in 2011 in Germany. The tactical versatility of this team has been mentioned leading up to and throughout this tournament, and if Sweden’s unpredictability is their forte, sticking with this counter-attacking system might lay the best path to the Scandinavian nation’s first ever World Cup trophy.