In the Copa América 2019, Columbia won Argentina and Qatar to secure their place in the quarterfinal. Their performance against Argentina reflected they are more than an average team. In this tactical analysis, we will reveal the pressing football of Columbia, also how Columbia attack the left flank as well.

Paraguay, after disappointingly played a 1-1 draw against Argentina due to the missed penalty of Derlis González, they got two points in Group B. They had to try everything to obtain the best result (either the second in the group or one of the best thirds). However, Columbia was too strong for them. This tactical analysis will reveal how Columbia beat Paraguay.

Lineups of both teams 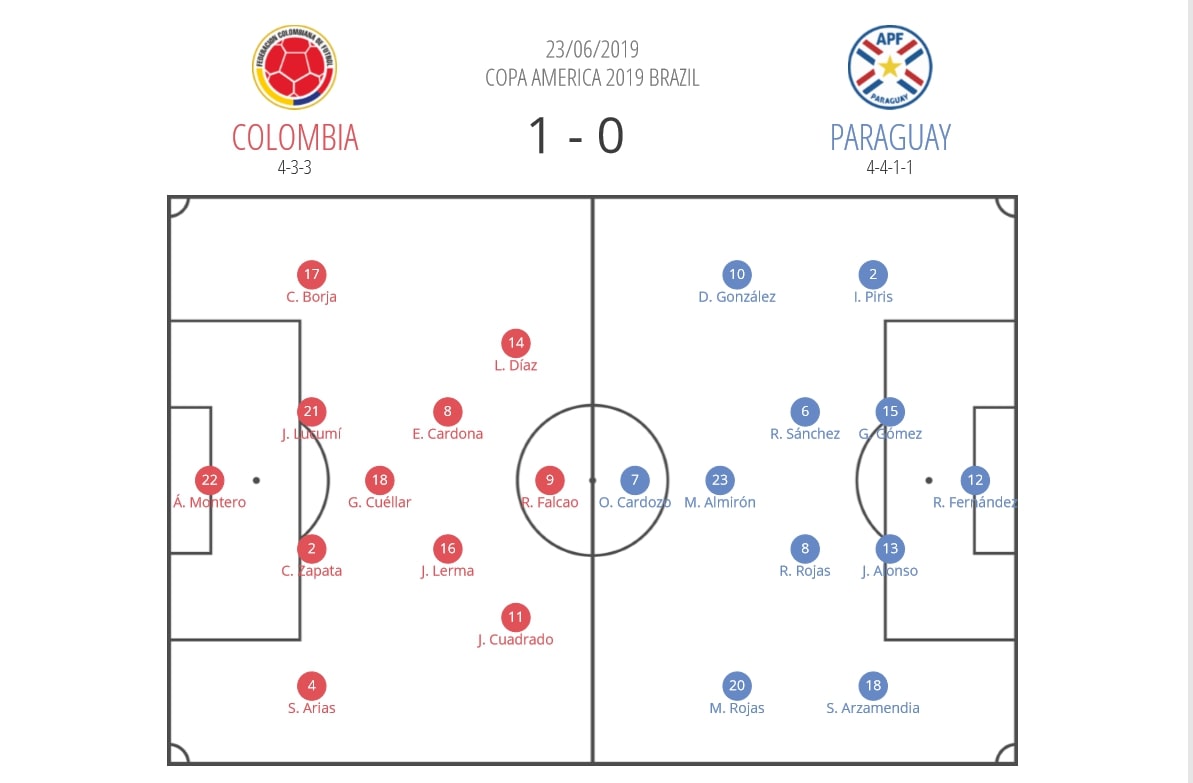 Since Columbia secured their place in the quarterfinal, they had rooms to rest some key players. Real Madrid star, James Rodríguez, Yerry Mina and Davinson Sánchez were all benched. Gustavo Cuéllar, Jefferson Lerma and Edwin Cardona formed the midfield trio and provided some energetic displays. The attacking plays from Cristian Borja and Luis Díaz were eye-catching as well. Falcao backed to the team. Only Juan Cuadrado started all three games.

Paraguay started nearly the same team after their draw against Argentina. The only change by Eduardo Berizzo was to let Óscar Cardozo replaced Federico Santander. Newcastle attacking player Miguel Almíron started but his performance was slightly disappointing. Some familiar names such as Fabián Balbuena and Juan Iturbe were missing.

Since the press of Columbia and limited technical abilities of the players, Paraguay tried to find Cardozo directly to create chances. The 36-year-old striker played as a target man to receive long balls from his teammates. His experience and physical strength allowed him to use win the ball from the air. However, this tactic did not pose a menace since the Cardozo did not have backups.

The below scene showed the above tactics. Cristián Zapata could not prevent Cardozo from winning the ball as the big man was leaning on him (circled). Meanwhile, other Columbia players did their job as well, they marked/traced the oppositions (the rectangles).  Cuéllar and Jhon Lucimí did enough to cover spaces between Cardozo and Almíron (yellowed areas). Therefore, Cardozo was left without supports and he could not lay the ball off to his teammates. This was the reason why this setup failed in the game: lone striker without backups. In this situation, Cardozo won the ball in the air but Santiago Arias recovered it.

Combinations between Borja and Díaz

Despite scoring from a counter-pressing occasion, Columbia tried to attack Paraguay’s right side of the defence. They did it with Borja and Díaz. Díaz, as a left winger, he dropped to the half-spaces to drag the opposition right-back. As a result, spaces were generated behind the right-back. Then, the left-back could join the attack to exploit those space, looking to further develop the attack. Paraguay could not deal with this tactic.

The below image showed how Columbia attacked the left flank. As we discussed, Díaz dropped and Iván Piris followed. In that instant, spaces were generated behind Piris. The Paraguay defensive line had to move to cover those spaces. However, the ball is always faster than the players. The pass was made and Borja successfully received the ball behind Piris. Paraguay could only clear the ball in their final third.

In the next image, we show another combined movement by Borja and Díaz. The idea was similar to the previous example: uses Díaz to draw the attention of opposition defender. Then, the left-back would perform overlapping runs to create a 2v1 situation against an opposition.

As shown below, Díaz holds the ball on this occasion. He drew Paraguay defensive midfielder Richard Sánchez out. At the same time, Borja was running behind Díaz. It created the 2v1 situation against Sánchez. Paraguay could only prevent this situation by tracking Borja’s run, which they did not. As a result, Borja received the ball from Díaz and provided a dangerous cross.

Despite without the services and helps from Borja, Piris still could not deal with Díaz.  Díaz dropped to the midfield in several occasions, dragged Piris out of position and exploited the space behind the right-back.

In the below image, Díaz dropped to the midfield and Piris followed him to prevent the Columbian turn. However, Díaz played a quick one-touched pass to his teammate and eliminated Piris’s pressure (Rectangle). After Piris left his position, huge spaces were created behind the right-back. The Paraguay centre-backs were occupied by Duván Zapata, they could not cover those space. As a result, Díaz ran into space behind Paraguayan and started an attack.

The defensive shape of Columbia

Columbia defended in a 4-1-4-1 shape in this match. They would press high to prevent oppositions’ build-up. The key tactical concepts of Carlos Queiroz’s Columbia defence are to prevent central penetration and compress space. Their defensive line would remain compact to block the central area. This could also contain the opposition pivot. Their lone defensive midfielder Cuéllar usually stayed behind the midfield line, his job was to take care of Almíron, another quality player of Paraguay. They wished to force the ball goes wide.

As shown below, the Columbia players stayed close to each other to prevent central penetration. Falcao also positioned himself deeper to eliminate Rodrigo Rojas. Cuéllar positioned himself around Almíron. Therefore, Júnior Alonso did not take a risk and he passed the ball to the left, where the Columbians were willing to see.

They did not mind the ball was passed to the side since they had the ability to press the ball at sides. The Columbia players would quickly react, with the wingers chasing back. Their full-backs would also step out, even the centre-backs. This could compress the space at sides, forcing oppositions to play the ball with pressure.

The below image reflected the reactions of Columbia players. The ball was moved to González at the right side. Borja stepped out, Díaz closed off González. With the centre-back Lucimí stepping out to cover the opposition at the centre. They trapped González at the side. Columbia enjoyed numerical superiority, and spaces were compressed. They could win the ball back easier on such occasions.

Almíron did not play his best in the game. It was because of the marking of Cuéllar in most of the time, also the counter-pressing of Columbia. The Newcastle attacking midfielder recorded one shot off target, one successful dribble and zero key passes. We mentioned how the setup of Columbia allowed Cuéllar to mark Almíron. However, the ethics of the Cuéllar should be praised. Take the below counter attack as a situation. Almíron received the ball at the centre and looking for a pass to his teammates. Cuéllar responded and closed off the Paraguayan quickly. Almíron did not pass at this moment, and he had to deal with Cuéllar immediately. It resulted in a poor pass and Columbia won the ball back. The effort of Cuéllar reduced the time for Almíron to think. Therefore, the Paraguayan struggled throughout the game.

Columbia is an energetic team and they press a lot. This game was not exceptional. They pressed wisely to force the opposition to pass the ball wide. Then they would block the passing lanes to win the ball at sides. Usually, they commit five to six players to press, they did not want the opposition to enjoy the numerical advantage.

The below images showed their intelligent pressing. Four Columbia players marked four Paraguayans (rectangles). They compressed the area around the ball carrier, forcing the oppositions to play in tight spaces (red lines connected).  Since the ball was in the centre, Cuéllar stepped out to press. At that moment, Rojas did not have a forward option or a side option to pass.

This was the situation after Cuéllar pressed. Rojas passed the ball back to Gustavo Gómez. Gómez was in trouble now. A poor touch of the centre-back prevented a pass back to the pivot. On the other hand, Columbia man-marked the oppositions as well (yellow lines). Díaz pressed and Gómez did not know how to do. He did not kick the ball forward. Worse still, he lost the ball in their own third.

Apart from normal high pressing, Columbia also performed good counter-press to prevent opposition to counter. Furthermore, they would recover and start an attack after counter-press. This was where the goal came from.

Columbia lost the ball seconds ago in the below scene. It showed how quick the Columbians compressed space around the ball carrier to counter-press. Five to surround two as the yellow lines connected. Also, some yellow shirts were closing off the Paraguayans. The only chance to play out of the press was a pass to Almíron, but the attacking midfielder did not move to provide an option. The ball carrier was in trouble and he was not able to make a decision. Columbia regained possession and this attack led to Cuéllar’s winning goal.

Columbia did enough to win this game. They should have scored more than just one, but they were missing the finishing touches in front of goal. They also utilized this chance to rest their key players. The press and counter-press of Columbia were good, we wished they could carry on their style against Chile. The way the kept Almíron and Cardozo in the pocket were brilliant as well. They have to keep focus throughout a 90-minute match and fight for the title.

Paraguay also qualified to the Copa América quarterfinal since Japan recorded a draw with Ecuador. However, Paraguay players have to improve in different areas. For example, make their decisions quicker. Furthermore, their style did not gain an advantage when facing good teams. If they wanted to obtain a better result, their key players have to step out.