After a disappointing World Cup, Lionel Messi decided to unofficially retire or at least take a break from the national team. Over the last few years the whole game plan of Argentina has been based on getting Messi into a good position. The team heavily relied on the magic moments of their number ten despite having elite offensive players.

In 2014 their solid defence along with the individual class of their players up-front was enough to reach the World Cup final. After losing to Germany they also lost the next two finals in the Copa América. Then Lionel Messi retired the first time but came back to make a last run at the World Cup trophy.

After struggling heavily in the group stage, France were too strong to beat. Lionel Messi didn’t perform well enough, and the weak defence was the key to their loss against the French team.

Who can replace Messi?

Now Argentina have to think about how to survive and create a strong team without their ex-captain. In the national team, Messi often had a free role behind one striker, Agüero or Higuain. He could drift around between the lines and his teammates tried to find him there. In this position, his dribbling could be extremely dangerous. However, Argentina were rarely capable of taking advantage of all of his strength’s while finding the right fit for him in the structure.

Over the last years, Argentina had another great talent who didn’t receive any playing time because it seemed that he and Messi couldn’t play together. His name, Paulo Dybala. Besides strong performances for Juventus Turin Dybala had to sit on the bench during the World Cup because of Messi. With Messi’s retirement, Paulo Dybala could finally show what he is capable of doing. Similar to Messi, Dybala likes to move between the lines. At Juventus, he usually plays behind one striker and helps his team to get into the dangerous scoring zones.

Furthermore, Argentina has another interesting talent. Exequiel Palacios started in both friendly matches against Guatemala and Colombia and showed strong performances. The young man from River Plate is only 19-years old but he can show his tremendous talent even at such a young age.

Actually, no one can replace Messi completely. Lionel Messi is probably the best player of that generation but without him, Argentina could focus more on the strength of the team than on the individual skill of Messi. With another disappointing tournament, Argentina now wants to build a new team with their young players. Players like Dybala, Lo Celso, Paredes, Pavon or Correa should step up to make the Argentine team successful again.

Against Guatemala and Colombia, the new coach Scaloni lined-up his team in a 4-2-3-1/4-3-3. Against Guatemala Lo Celso often moved higher while Paredes was the central point during the build-up. Argentina tried to move the ball and dominate the game. Especially Paredes showed his awareness of space and his qualities in terms of positioning.

During build-up, Argentina had a nice structure with a lot of triangles and good spacing. Most of the time the central midfielders Lo Celso and Palacios supported the build-up. They were rarely positioned too high to participate. Therefore, Argentina could easily advance into higher zones even if Guatemala pressed higher. However, they often focused heavily on the wing. Especially the triangles on the flanks were important. On the left side Tagliafico, Martinez and Palacios were the ones who initiated dangerous attacks.

Because most of the time Argentina overloaded the half-space and wanted to attack diagonally from the wing towards the centre. Inter’s Martinez stood out with his quick dribbling while he got supported by Palacios and Tagliafico. With Palacios and Lo Celso between the lines, Argentina constantly had passing options for the wingers when they tried to move diagonally towards the centre.

However, their structure was often not good enough to threaten the opponent constantly. For instance, the movements weren’t cohesive and therefore they couldn’t open space in the centre to break through. Only when Lo Celso supported the three in the centre and Simeone started his runs behind the lines Argentina could get behind the last line.

On the right side, Pavon often moved into the half-space to offer a passing option between the lines. But, they could rarely find him between the lines. One reason was the position of the fullback who didn’t push high. That’s why Argentina sometimes wasn’t positioned wide enough to stretch the defence.

Besides their structural problems Argentina also hadn’t ideas to break through. Too often they wanted to play vertically even if their own structure didn’t offer them an advantage. With Paulo Dybala between the lines, they had the individual quality to create something out of nothing. Especially the dribbling of Dybala were good enough to give Argentina solutions in the post-Lionel Messi era. 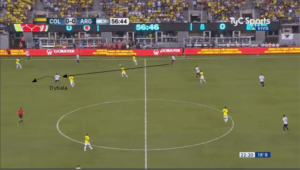 All in all, Argentina has to improve offensively. However, the team started the process, so you can’t expect perfect positioning and movement of all players. But without Lionel Messi, Argentina could have a new strength, the defensive work ethic.

Lionel Messi is well known for his lack of defensive work, especially in the national team. Now without Messi Argentina seems to develop into a team which wants to press aggressively as a unit to gain the ball high up the pitch.

Against Guatemala and Colombia Argentina often pressed the build-up by using man-orientations. In that way, they pressed the ball carrier effectively. Furthermore, all of the midfielders are capable of intercepting passes. As a consequence, they often could get the ball in the half of the opponent. Against an unorganised and wide opponent, Argentina found ways to get behind the defensive line. When the team progresses in that way Argentina could develop into a team which is hard to play against. Their lacking ideas and structural problems in the last third would compensate in that way.

Before and during the World Cup Argentina’s defence was the biggest weakness and was one reason they could get past the Round of 16. Against Colombia and Guatemala, they not only seemed to be improved in terms of pressing but also their counter-pressing looked better. Their structure with a lot of triangles allowed them to quickly get access to the ball after losing it. After they won the ball back they could attack an unorganised opponent more easily.

Clearly, the unofficial retirement of Lionel Messi will weaken Argentina. No team can replace one of the best players in the history of football easily. With Paulo Dybala, they have a player who could replace Messi in some ways and give them enough creative ideas between the lines.

With a lot of young players in the squad, Argentina tries to create a team rather than having a bunch of individual world-class players who didn’t seem to fit together perfectly. When they improve their positioning offensively and their pressing Argentina would be a solid team. With new talented players, they could even develop in a dangerous team until the next World Cup in 2022.