Between 1998 and 2010 Paraguay made four consecutive World Cup appearances but have since missed out on the last two editions. However, they have made a bold, ambitious statement by appointing former Mexico manager Juan Carlos Osorio as the man to lead them forward. Though the Colombian had his fair share of doubters while at the helm of La Tri, Osorio can point to his achievements with Atletico Nacional and the Paraguayan public should be more receptive to his progressive ideas.

Osorio will be tasked with ushering through a new generation of promising Paraguayans and one such player who should be on his radar is flying full-back Santiago Arzamendia. The versatile 21-year-old, who can also play on the wing, has had a fantastic twelve months and shone in the Libertadores as Cerro Porteño reached the Round of 16. Given the importance of full backs to Osorio’s system, Arzamendia emergence could well be a timely one.

The Albiroja would be wise to act quickly too as Arzamendia was actually born across the border in the Argentinian province of Misiones. There have been no suggestions that the naturalised Paraguayan might be poached by the Albiceleste but, given their struggles at full back in recent years, it wouldn’t be a surprised if the AFA were to come calling.

On the books of Asuncion giants Cerro since the age of 13, Arzamendia progressed through the youth ranks alongside a talented cohort that included Sergio Diaz, Julio Villalba and Josue Colman. Arzamendia went on to make his debut in 2015 but it was only in late 2017 that he truly established himself as a regular, playing 13 games as Cerro won the Clausura.

Arzamendia has continued that form into 2018, playing another 21 league games, as well as another 8 in the Libertadores, quickly becoming one of best young players playing in Paraguay. So, as Paraguay enter an exciting new dawn, we analyse why Arzamendia could well be in line for a national team debut in the not-to-distant future.

What really sets Arzamendia apart from his peers is his fantastic crossing ability. Able to generate plenty of whip and pace with his wand of a left foot, Arzamendia is a centre forward’s dream. Whether it be from deeper positions or closer to the byline, the left back is regularly seen bending the ball in behind the defence and presenting teammates with golden opportunities. 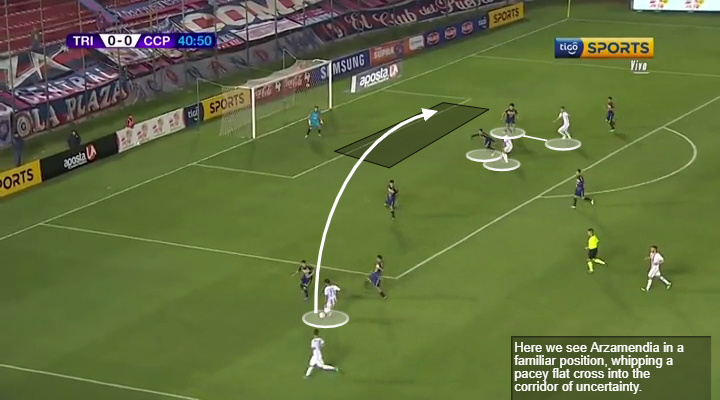 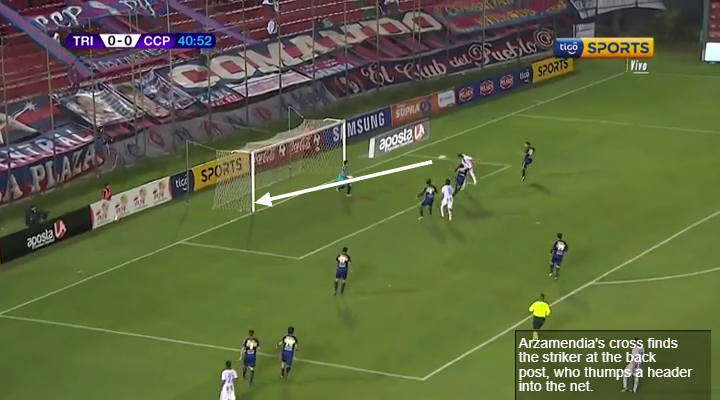 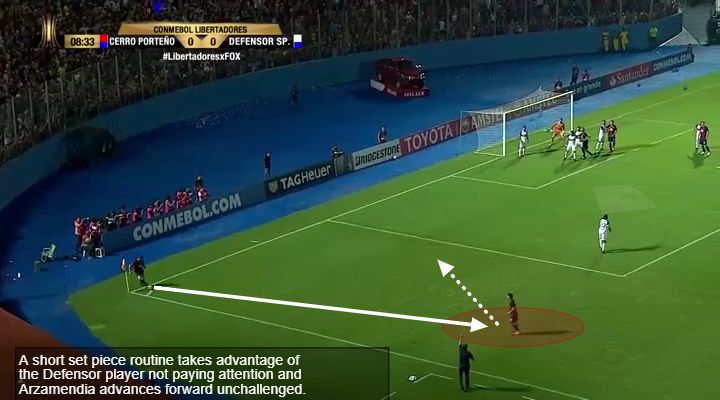 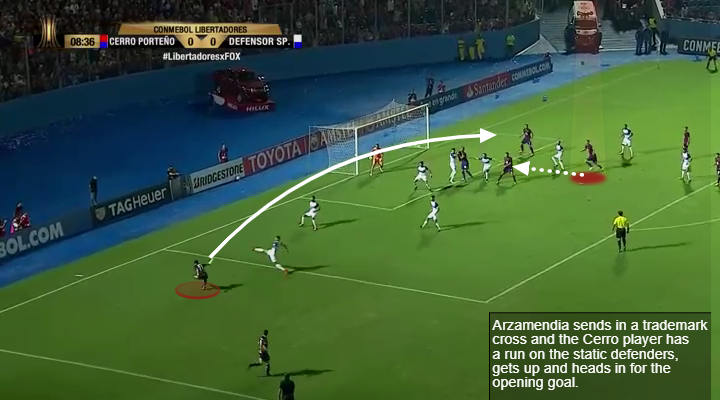 Even when a cross is miscued – such as the fluke goal against Palmeiras – the delivery always asks questions of defenders and goalkeepers given the dangerous areas that Arzamendia regularly hits. 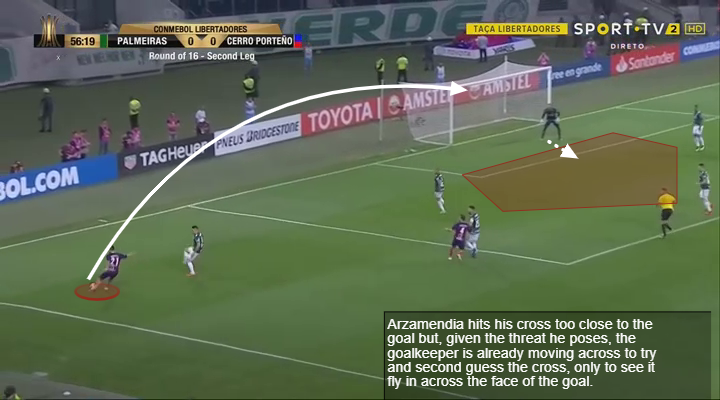 This crossing ability inevitably lends to Arzamendia being a good option from free kicks and corners, such as the examples below: 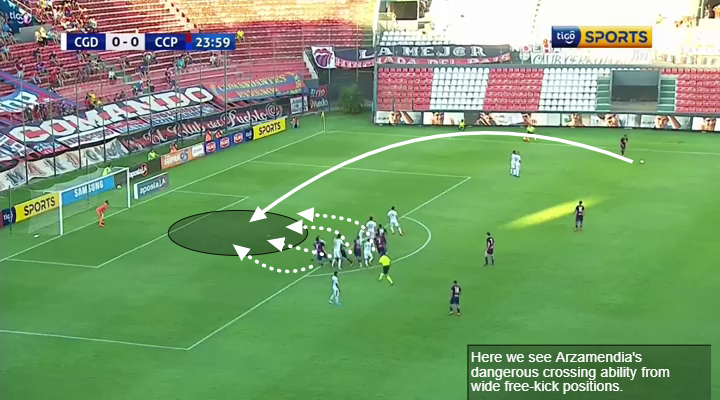 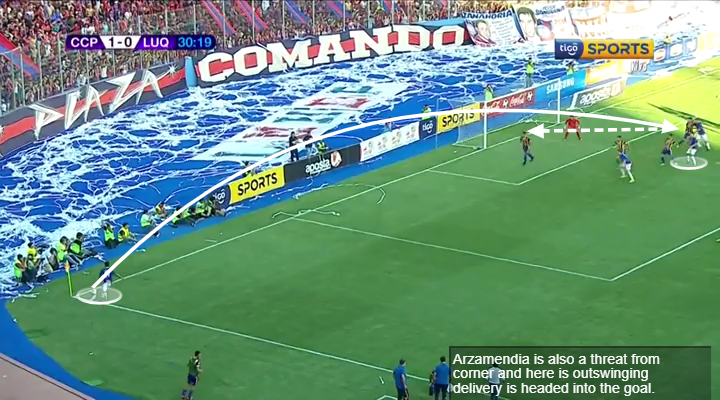 With his left foot being such a potent weapon, Arzamendia has to work hard not to be too predictable and has shown that he is capable of cutting inside into the half-spaces and occasionally using his right foot to cross. 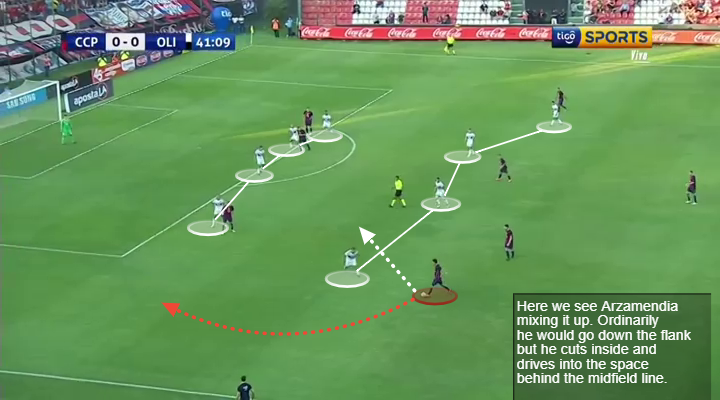 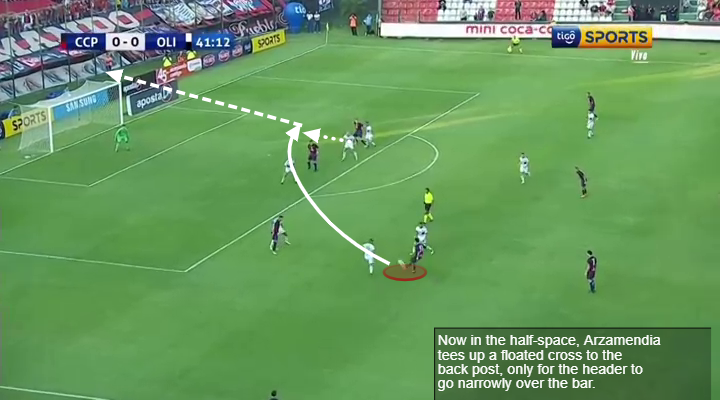 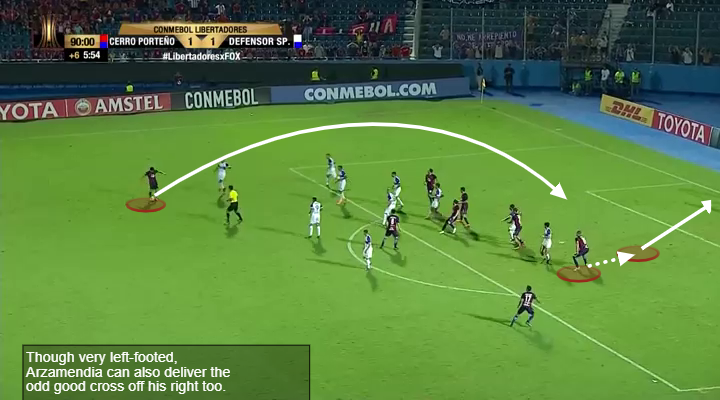 What’s more, another trick up his sleeve is a decent long throw which can be an effective attacking tool to get the ball into the box too. As shown by Liverpool’s appointment of a throw-in coach, modern football is all about marginal gains and Arzamendia certainly has more than one string to his bow when it comes to getting dangerous balls into the box. 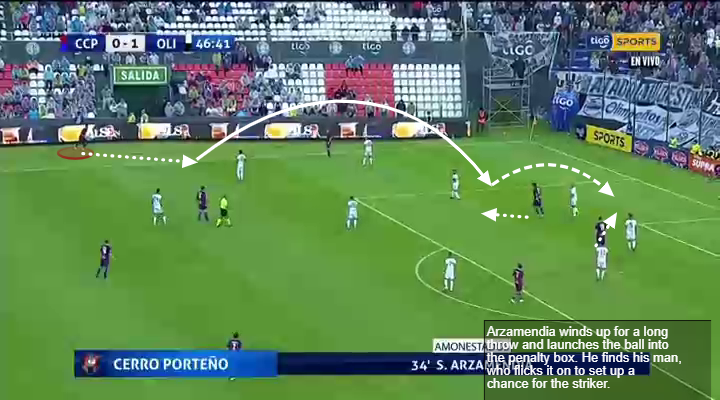 As a former winger it’s no surprise that Arzamendia has bags of pace and dribbling skills, making him a very dynamic and versatile option down the flank. While he can still operate effectively further forward, full back suits him better as it gives him more space to run into and he adds great width to his side. 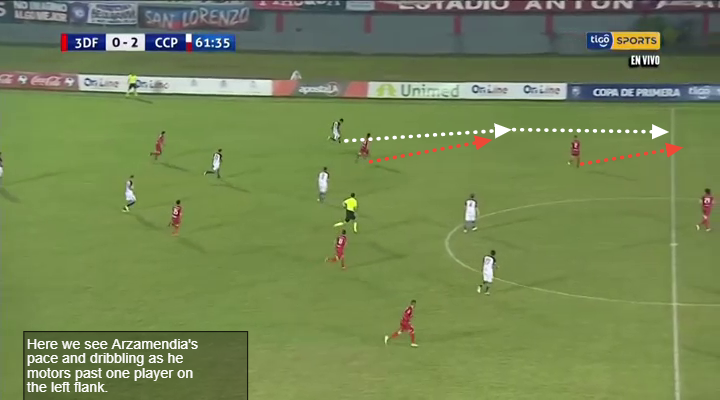 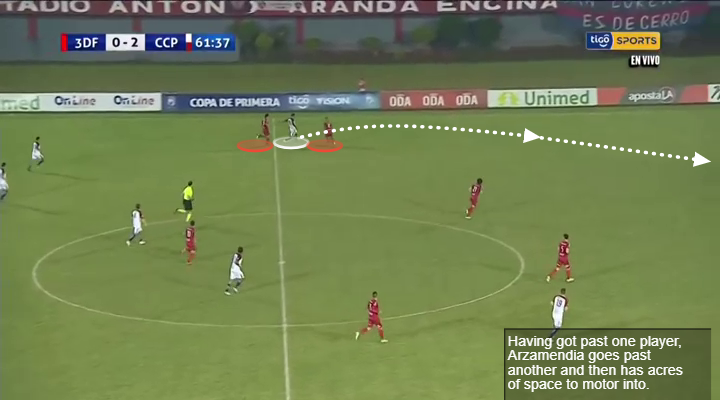 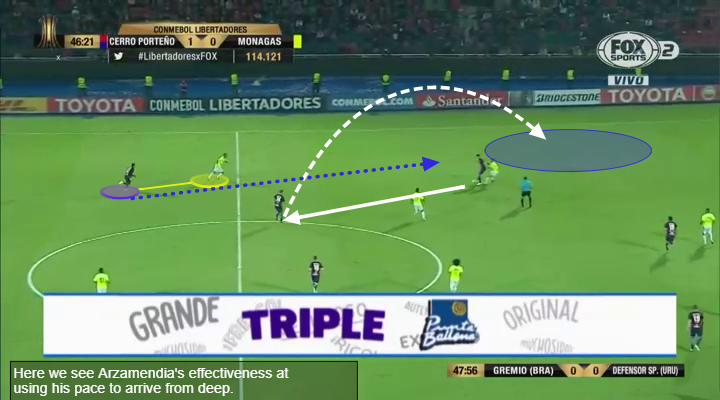 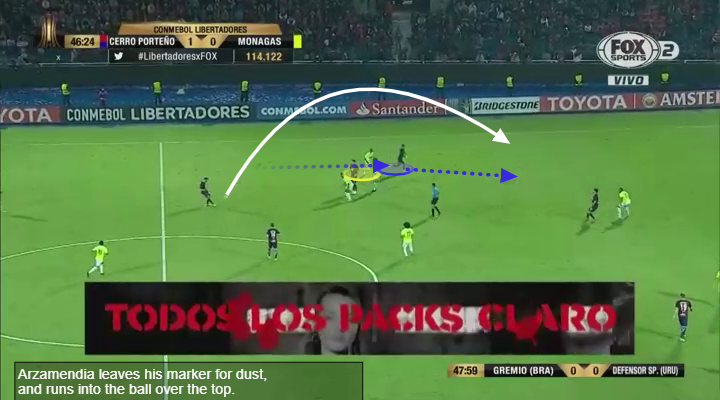 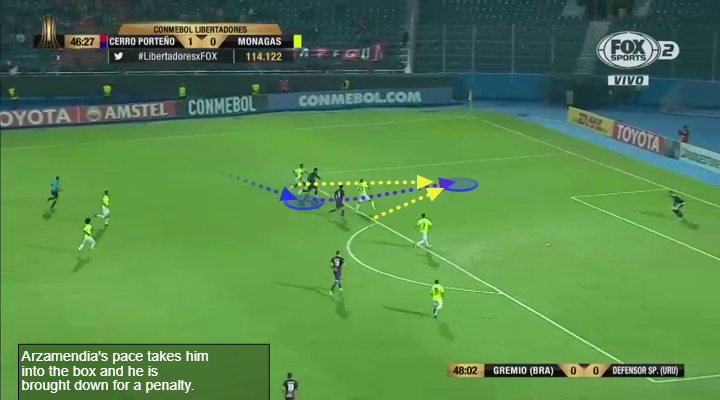 Furthermore, Arzamendia’s mixture of pace and crossing presents opposition defenders with a conundrum; either they get tight and risk getting skinned on the outside or they sit off and risk giving him the time to curl in a cross from deep. 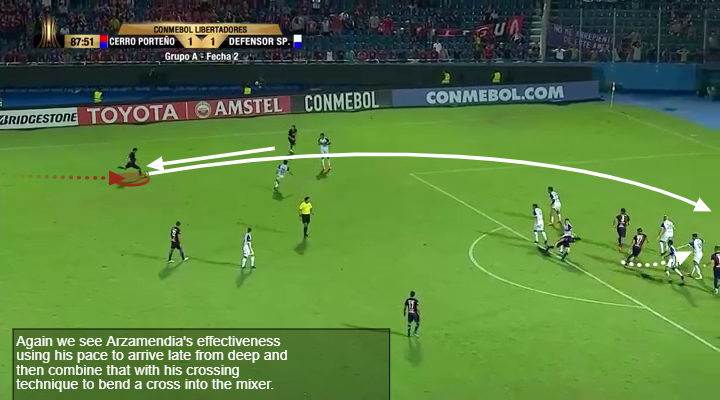 While at his best going forward, Arzamendia’s speed also has its uses when it comes to defending. Inevitably his attacking style can leave gaps in behind but he can make good recovery runs thanks to his tremendous pace. 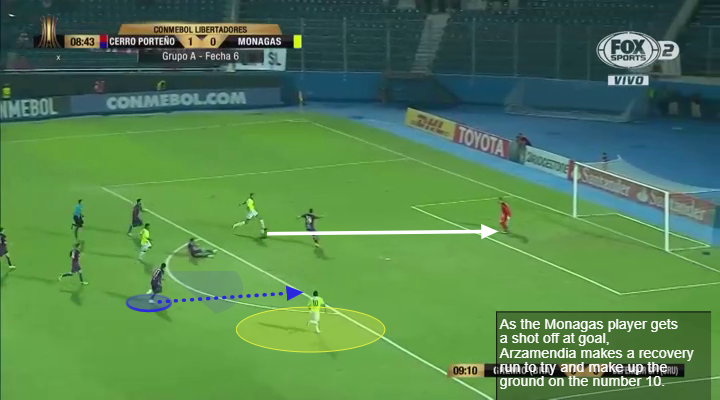 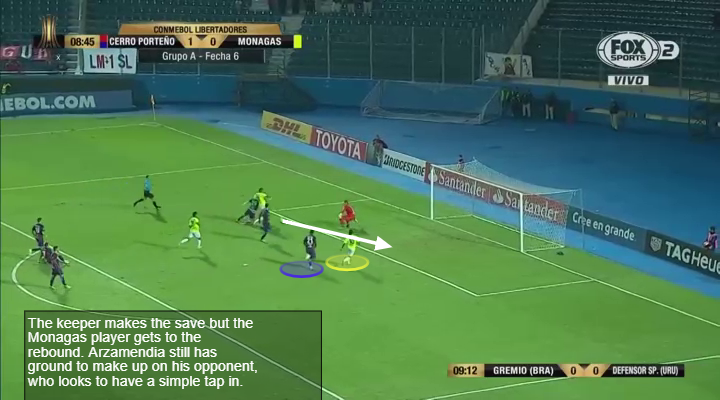 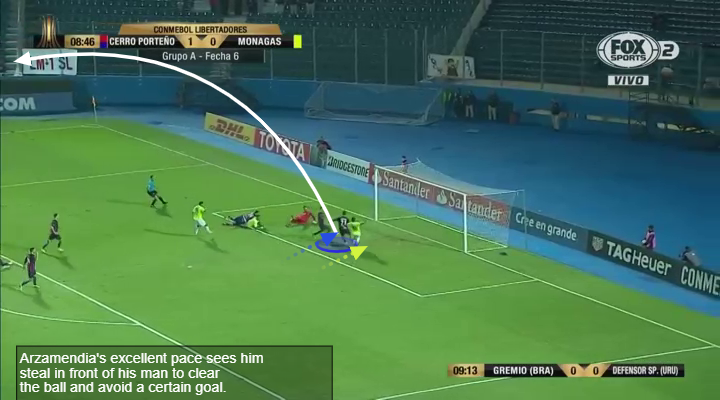 This pace and versatility mean Arzamendia could suit a number of systems, with perhaps a 3-5-2 or 3-4-3 best harnessing his skill-set, as well as allowing him to switch between orthodox full back and winger positions during the course of a game. This flexibility could be another reason why he may be given a chance by Osorio as he has used players like Miguel Layun in a number of roles.

On top of his pace and crossing, another eminent feature of Arzamendia’s arsenal is his long-distance shooting. He doesn’t score often but when he does they are often pretty special, as some of the examples below attest. 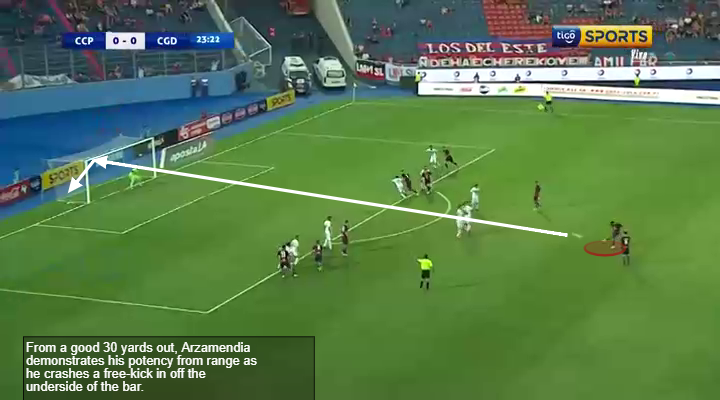 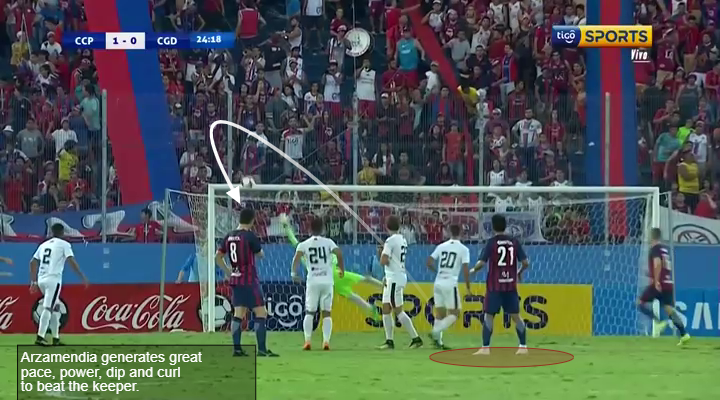 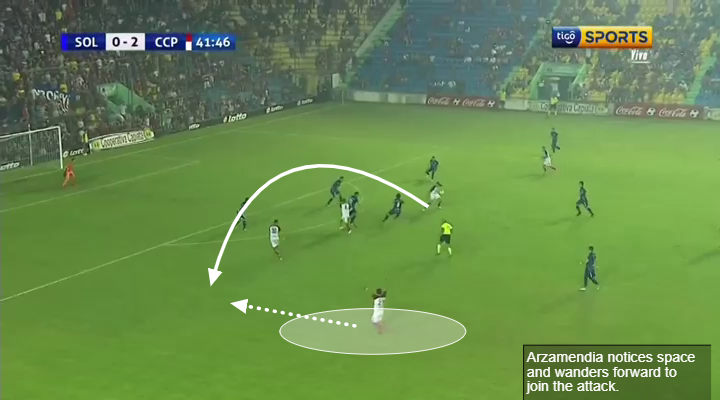 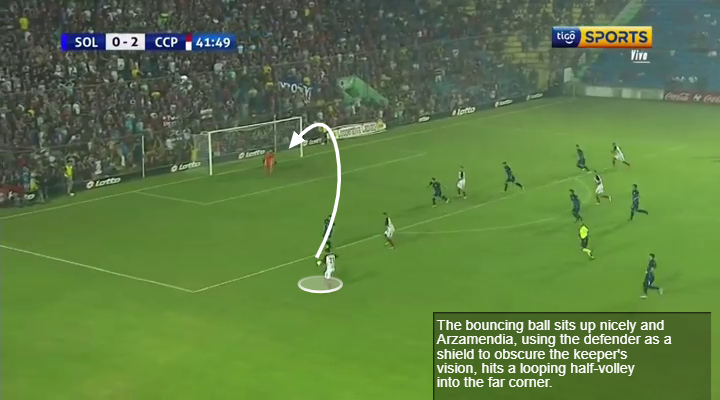 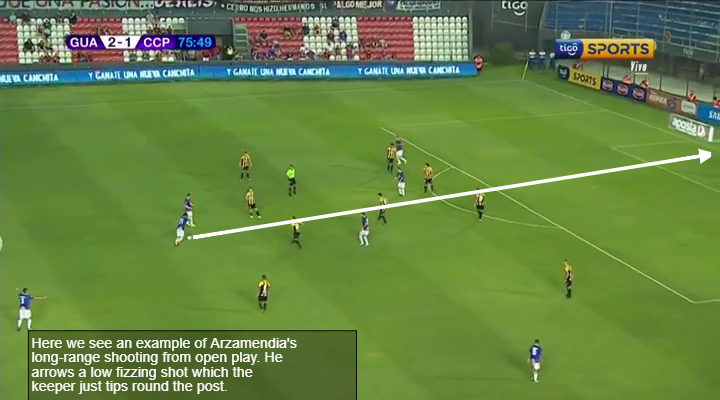 It has already become something of a cliché that modern day full-backs are weaker on the defensive side of their game. While Arzamendia is a player who likes to defend on the front foot and push high up the pitch, his tackling could do with improving as he has a tendency to go to ground too easily. 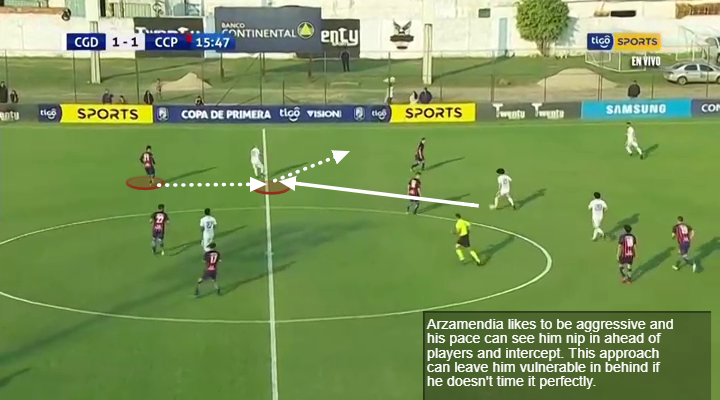 There is also the temptation to rely on his pace to get him out of trouble which could well get found out in better leagues.

Another issue is his aerial ability. Not blessed with natural height, Arzamendia could nevertheless improve his heading, particularly as Osorio often likes to have full backs who are good in the air.

Even though Arzamendia only has a year of regular senior football under his belt, there is already the feeling that perhaps the 21-year-old won’t be around much longer. The most sensible option would be a move to Brazil, Argentina or perhaps Mexico before crossing the Atlantic, although a move to Europe at this point wouldn’t be completely out of the question.

As for the national team, there is quite a bit of competition for the left back position. Both Junior Alonso and Blas Riveros are probably ahead of Arzamendia in the pecking order but at the very least the strength in depth bodes well for the Osorio revolution.