To the surprise of no-one, Argentina’s World Cup campaign highlighted the severe lack of options in a number of positions. Fullback, midfield and particularly centre-back have all been problematic for some time as the talent pool has dried up at youth level. Therefore, a key priority for the new boss – whoever that may be – is the need to start looking at younger options if Argentina are to be competitive in Qatar in four years’ time.

With that in mind, one such option as a youthful alternative at centre-back could well be Juan Cruz Komar. The 22-year-old defender has established himself as one of the better defensive prospects in the Superliga and was a regular for the Talleres side that qualified for the Libertadores for the first time in 17 years.

Born in Rosario, Komar began his career at local club Renato Cesarini before he was snapped up by Boca Juniors in 2014. Rodolfo Arruabarrena handed the teenager a league debut later that year but only went on to make four more appearances for the Xenezies, curiously all in the Libertadores.

Deemed surplus to requirements at the Bombonera and looking for regular playing time, Komar moved to Talleres on a six-month loan while they were still in the Nacional B. The sleeping giants from Cordoba went unbeaten and returned to the Primera after 12 years in the wilderness and promptly exercised their option to buy 50% of Komar’s rights for $750k.

Since then Komar has featured regularly for La T, making over 40 top-flight appearances, as they have consolidated themselves in the Primera and even secured continental football. His name may not be regularly mentioned in conjunction with a national team call-up yet but here we analyse why he should at least be under consideration.

One of Komar’s obvious abilities is his heading. Standing 6’ 2’’ tall, Komar’s height gives him an advantage over most opponents when it comes to dealing with aerial balls and last season he won 3.6 aerial duels per game on average.

Komar uses his timing and reading of the game to win these duels rather than relying on physicality or brute force to simply bully opponents. Nevertheless, he is proactive and aggressive when attacking the ball, as shown by the example below. 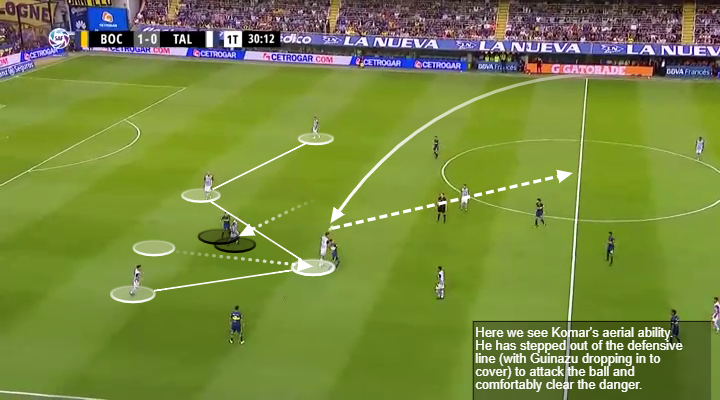 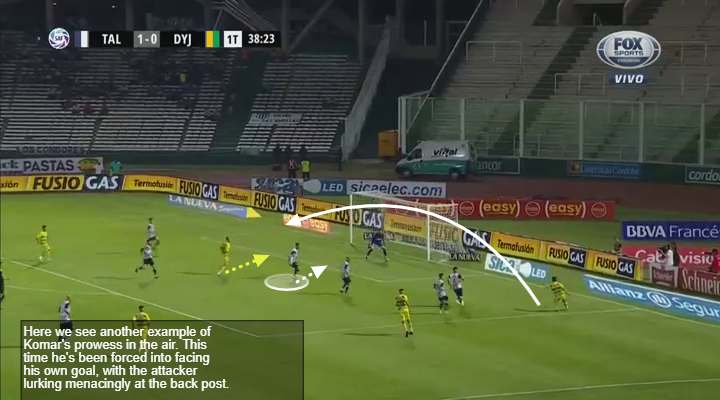 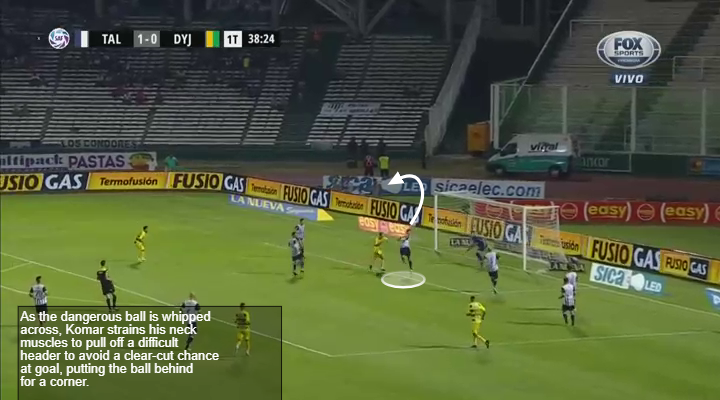 An area where Komar could improve his aerial game is by becoming more of a threat going forward from set pieces. His goal return is low and given his capabilities in the air, it’s something that could be worked on.

Komar is not your standard footballer, as shown by his interests off the pitch. A man with a clear social conscience, he has often spent time helping in local community projects and has articulately spoken about issues such as racism, the disappearance of Santiago Maldonado and social inequalities. He even spent two weeks in Palestine this summer, once again demonstrating that he is cut from a different cloth to most in his profession.

This measured, intelligent personality can be seen in his playing style too. A calm and composed defender, Komar is rarely seen diving into challenges and prefers to stay on his feet and stick out a long leg to intercept the ball. In fact, the stats show that he averages more than double the number of interceptions per game (2.4) compared to tackles (1.1) 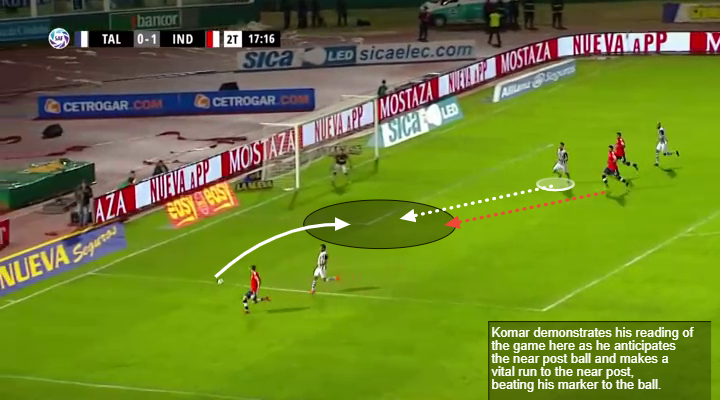 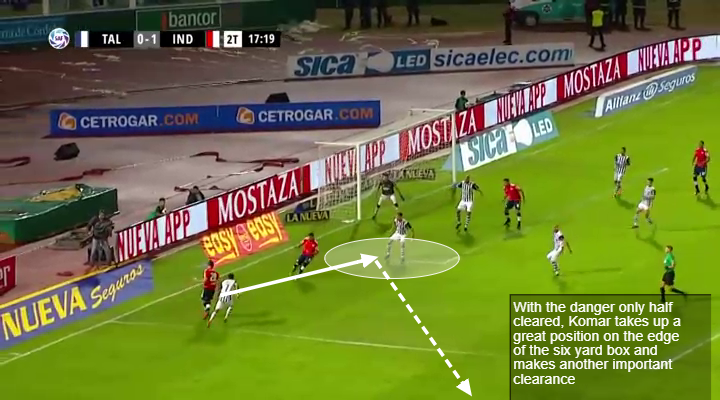 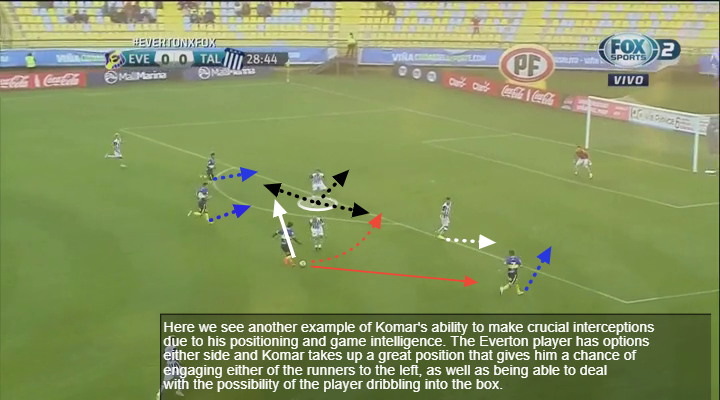 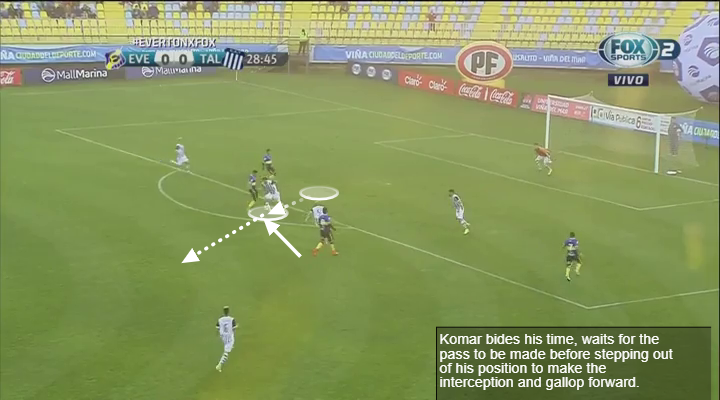 Another aspect of his defensive intelligence is by his fantastic disciplinary record. In 42 games he has picked up just 4 yellow cards, hinting at both an unflappable temperament and a good judgement of when to commit himself to a challenge. 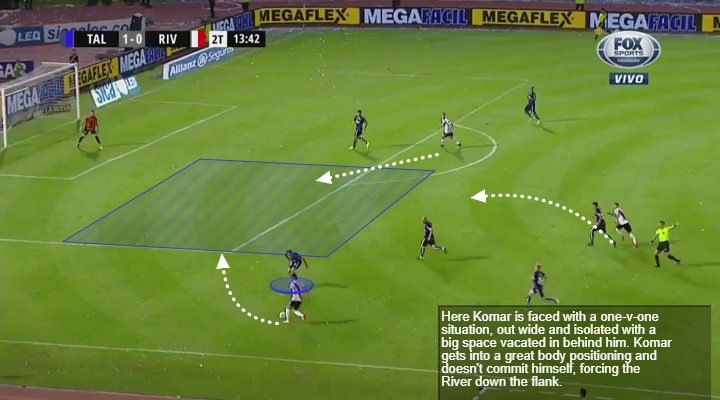 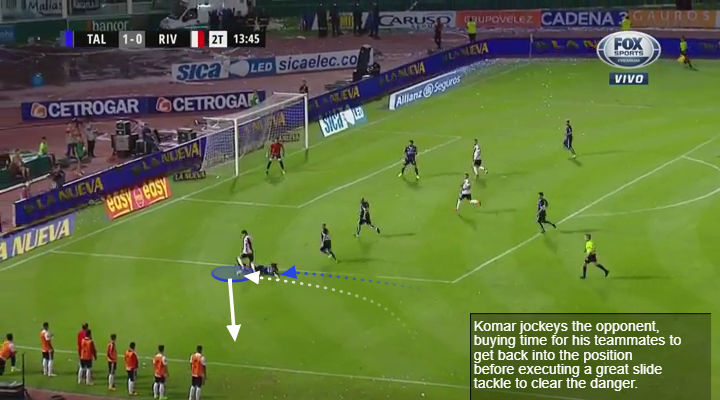 Aside from the defensive aspects of the game, Komar can also use the ball well when he is in possession. Though he keeps it simple most of the time, he averages a shade under an 82% pass completion rate and is comfortable bringing the ball out of defence. 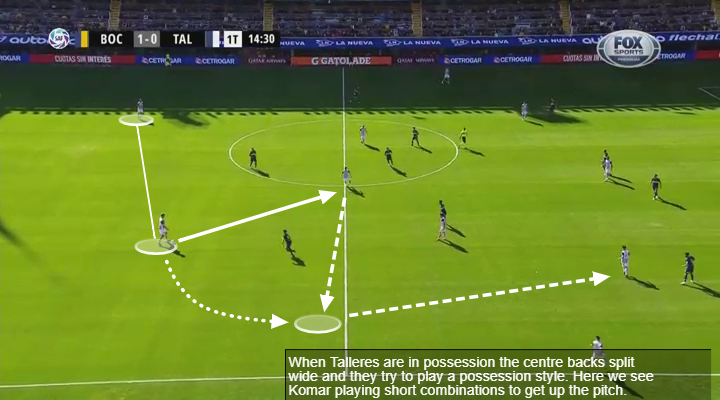 However, he’s not afraid to hit the long diagonals forward and averaged 3.7 accurate long balls per game last season. 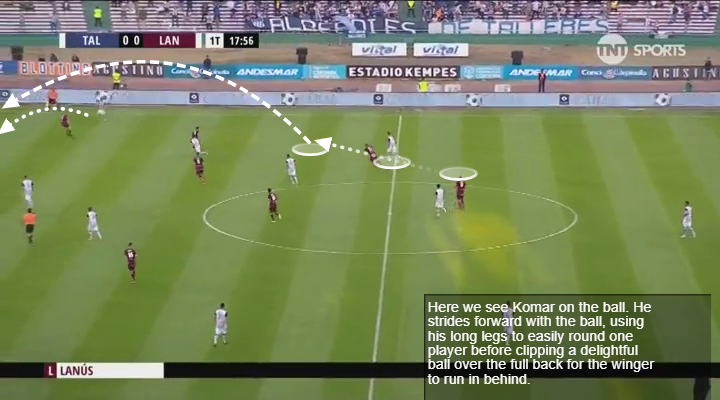 As alluded to above, Komar could improve his tackling even though, due to his style of play, it’s not really something he has to resort to often. Komar also lacks a bit of pace and can suffer when isolated against small nippy players but when he gets his long legs pumping he can usually make up the lost ground.

Despite his height and aerial ability, he could also do with bulking up in order to deal with the set up in physicality that a new league would bring. Still filling out into his tall frame and gaining experience, Komar still has plenty of time to polish the rougher edges of his game and the positives far outweigh the negatives.

Komar, who recently turned 22, has benefited from his time away from the spotlight in Talleres and has now established himself as a regular in the side. With Gandolfi, Quintana and new signing Araujo, there is plenty of competition at centre back to keep him on his toes, while the arrival of new manager Vojvoda should continue Talleres’ renaissance. Plus the prospect of Libertadores football next year means there should be no rush to move on just yet.

However, whether Komar stays or not might not be in his hands as clubs are beginning to get wise to his talent. Both Atletico Mineiro and PSV have been linked and perhaps a move would boost his chances of a national team call-up. While Komar may still be some way off making his Albiceleste debut, he is certainly someone worth taking a gamble on as a long-term project along with the likes of Martinez Quarta, Foyth, Conti and Franco.