Despite Cameroon’s best efforts to unsettle England in the round of 16, Phil Neville’s side managed to progress with a 3-0 win. Their opponents in the quarter-finals, Norway, had to overcome Australia on penalties to secure their place in the last eight of the FIFA Women’s World Cup 2019.

With another clean sheet, and a consecutive three-goal margin of victory, the Lionesses swatted aside the Grasshoppers in style. This tactical analysis will examine exactly how they did it.

England went with their usual formation of 4-3-3/4-1-4-1 for this game, with Keira Walsh again preferred as a single pivot. Despite injury doubts, the trusted duo of Millie Bright and Steph Houghton occupied the central defensive berths. Demi Stokes was selected ahead of Alex Greenwood at left-back, while Toni Duggan lined up on the same flank in place of Beth Mead. 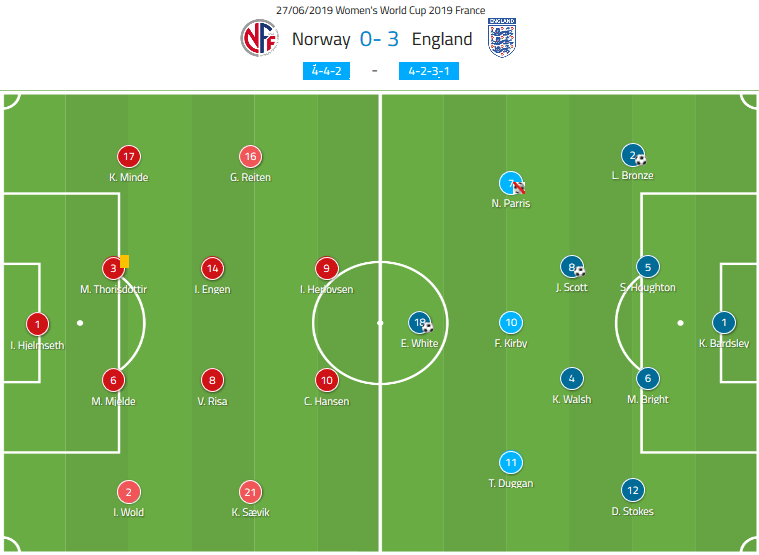 Martin Sjogren set his team up in a 4-4-2, with Barcelona forward Caroline Graham Hansen joining the experienced Isabell Herlovsen up front. The young duo of Vilde Boe Risa and Ingrid Syerstad Engen paired up in central midfield, while Chelsea’s Maren Mjelde lead her side from the heart of defence.

A common issue for England in this tournament, their opponents once again tried to shut off access to holding midfielder Keira Walsh. The Manchester City player was regularly flanked by Norway’s strikers, while they would also leave her in their cover shadow on the occasions where they applied pressure to Houghton and Bright.

It wouldn’t have come as much of a surprise to see Neville shift to a double pivot system for this tie. However, he stuck to his guns knowing the benefits that come from having both Jill Scott and Fran Kirby positioned between the lines.

England often bypassed Walsh in last night’s encounter, preferring to play lofted balls over the first lines of Norwegian pressure. In the sequence below, the immediate passing lane to the 22-year-old is blocked off by the angled press of Herlovsen.

The option exists for goalkeeper Karen Bardsley to use Houghton as a link to Walsh, but she instead elects to play a chipped pass towards Scott. The experienced midfielder flicks it on to Ellen White up front, who feeds Nikita Parris in space on the right. 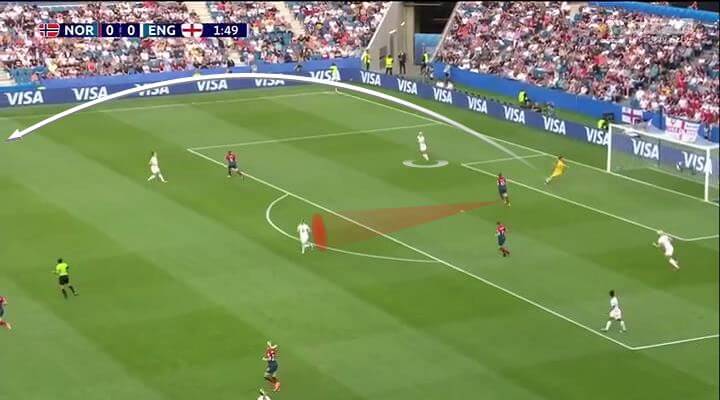 Parris is closed down quickly, preventing her from running directly at her opponent as she typically would. The space now exists behind the opposing left-back, with Lucy Bronze on hand to receive after a darting run. The Lyon star beats her tracking player before lining up a cross.

White moves towards the front post, dragging two defenders with her, before she drops back again to receive the cut-back. She fails to connect with the ball, but it falls for Scott arriving behind her, and the 32-year-old slots home calmly to give her side an early lead. 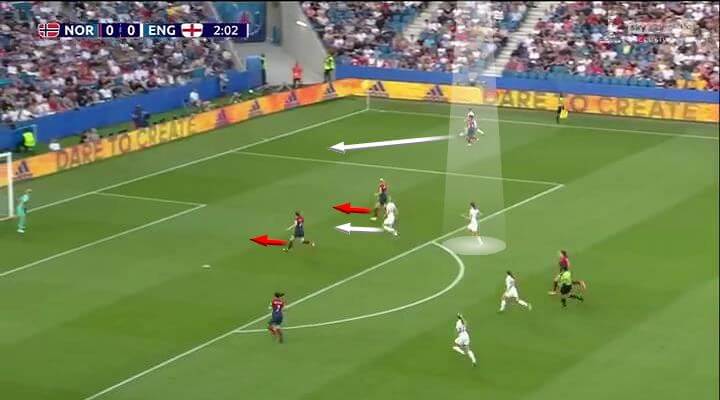 England also found joy by playing penetrative passes directly from the centre-backs to the offensive midfielders. Walsh sometimes chose to position herself in the half-spaces during the first phase of the build-up, stretching the opposing lines and creating gaps to play through.

As shown in the image below, Houghton can play a pass between two Norwegian midfielders with the strikers engaged on the right by the positioning of Walsh. Scott receives before feeding Parris in a one against one with left-back Kristine Minde. The winger ultimately scuffs her shot wide. 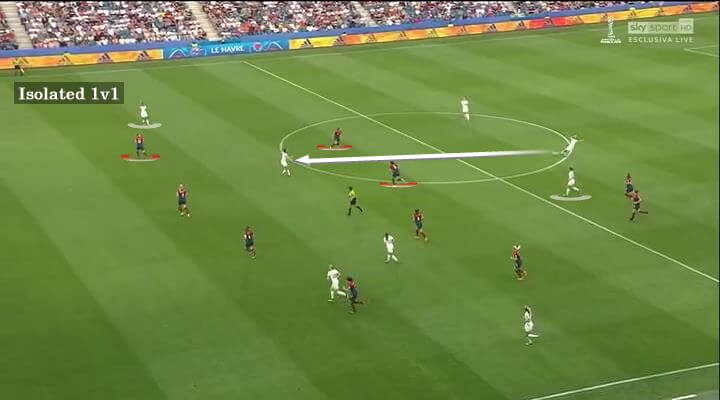 Along with bypassing the pivot in central areas, England also looked to progress directly via the flanks. As shown below, Houghton feeds Bronze on the right, with Walsh again occupied by Norway’s strikers.

From the wing, Bronze plays a perfectly timed through ball for Parris. The wide attacker makes no mistake this time as she cuts the ball across to White for her fifth goal of the tournament, putting her joint top of the scoring charts with Alex Morgan and Sam Kerr. 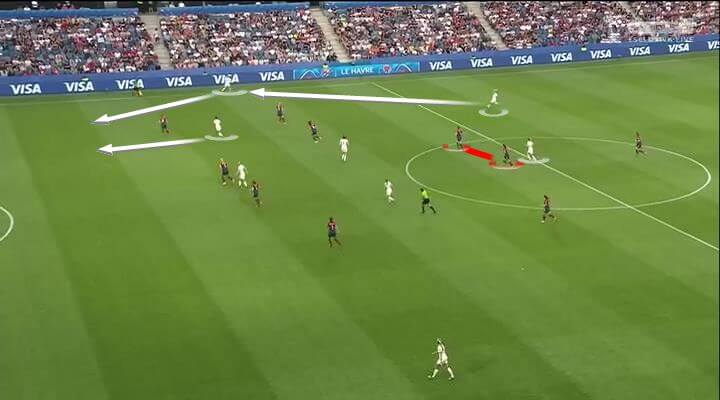 As illustrated in this tactical analysis, England’s attacking play was perhaps at it’s most fluid and effective in this game, registering 15 shots. Their ability to find alternative routes for progression was impressive, with Walsh frequently taken out of the play on many occasions.

Although the scoreline might suggest total domination from the Lionesses, Norway were able to create plenty of opportunities of their own. They also enjoyed 49% of possession, as well as making just one fewer pass and 1% less accuracy than England.

Sjogren’s side broke through their opponent’s first and second lines on a number of occasions with well executed third man moves and wall passes. However, most of their success came through direct lofted balls towards the strikers.

In the first example below, Maria Thorisdottir plays a long ball into the left channel of the attack. Bronze has been drawn out of her usual fullback slot by the dropping movement of Guro Reiten, leaving space to exploit in behind. Herloven makes a run on Houghton’s blind-side to receive, before the defender eventually recovers to force the Kolbotn striker into a heavy touch out of play for a goal kick. 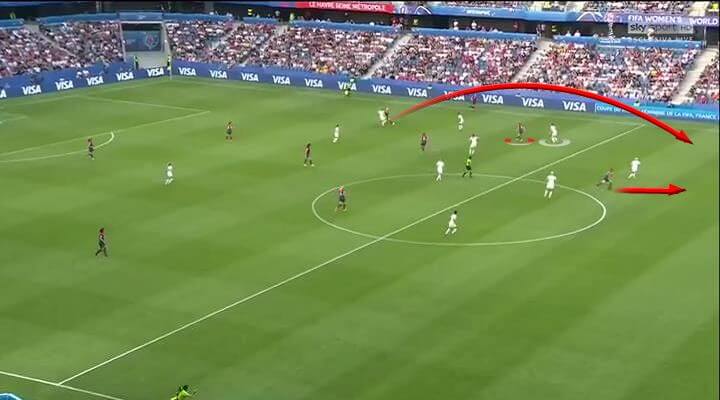 We also saw them make use of the third man concept with lofted diagonal balls. In the example below, Risa picks out Graham Hansen on the right. The striker’s first-time knock down falls for Reiten, but Bardsley is out quickly to close down the angle and collect the ball. 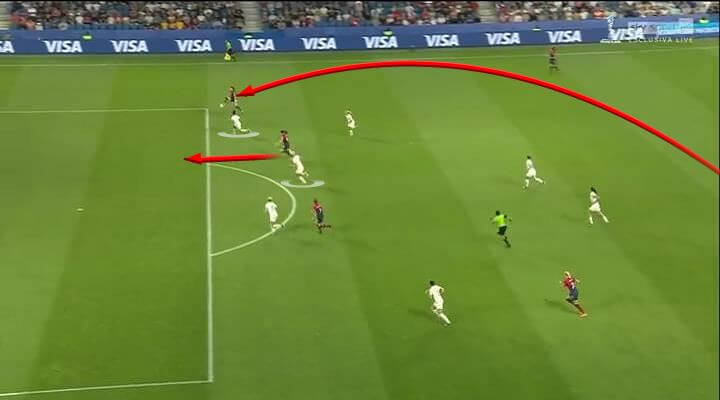 Throughout the game, England’s centre-backs struggled to cope with the aerial challenges posed. In the image below, we again see Norway play direct towards the forwards. They have engineered a two against two on the last line, and Houghton fails to clear the first ball.

It ultimately falls for Herloven, whose shot is wayward. These moments illustrate the overriding theme of their play, with long balls causing problems for the opposing defenders, and the Norwegian strikers unable to finish off the moves. 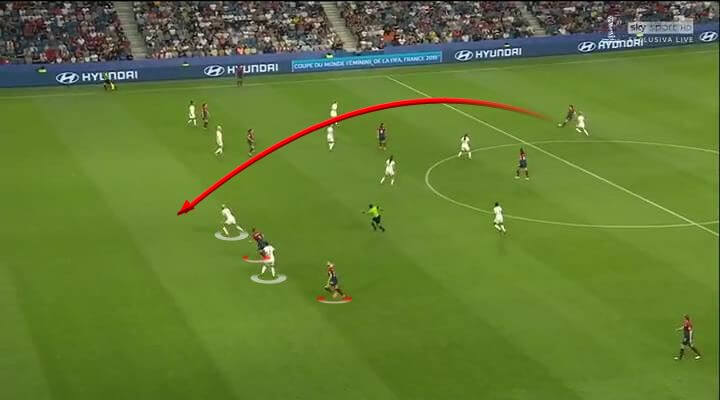 In terms of chance creation, they recorded 12 shots on goal, four of which were on target. With these statistics in mind, the two sides were quite evenly matched in many aspects of the game. However, Neville’s team had far more cutting edge in the final third and deserved their comfortable victory.

Following their second goal, England focused mainly on soaking up pressure and seeing the game out. They didn’t just do this by sitting back and defending deep, however. Instead, they continued to engage their opponents through the thirds, before eventually forming a compact defensive shape of 4-5-1/4-1-4-1 to protect their lead.

They also regularly held onto to possession for large spells, and never stopped searching for opportunities to progress, provided they weren’t leaving themselves exposed on the break.

The image below shows a typical structure in the established defensive phase. By this point, the Lionesses have added a third goal, and their primary objective is to manage the game through to its conclusion without conceding.

With Norway shifting the play over to the left, England move their defensive unit accordingly to close out the space on the flank. Notice also how the ball-near offensive midfielder, Fran Kirby, has stepped out to engage the player in possession. In these instances, Walsh would push up to form a line of four with the remaining midfielders. 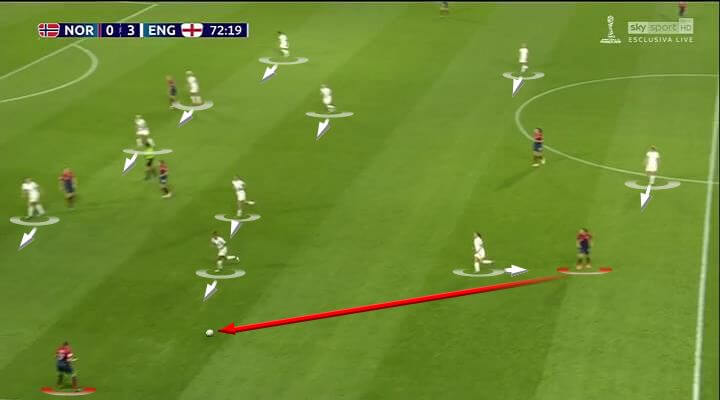 Their defensive organisation has been consistent throughout the Women’s World Cup, having only conceded once in the tournament so far. As we’ve seen in a number of their fixtures, Neville’s team are also well prepared to break quickly and effectively following a turnover.

This was again true last night, and it led to their third and final goal. Having recovered possession deep in their own half, they counter at speed to create a numerical advantage in the attack.

With six Norway players caught out ahead of the ball, four England players charge forward to exploit the open space. Just four defenders remain, with striker White joining in to create a five v four in her team’s favour. Bronze is brought down in a panic, and the fullback scores during the resulting free-kick. 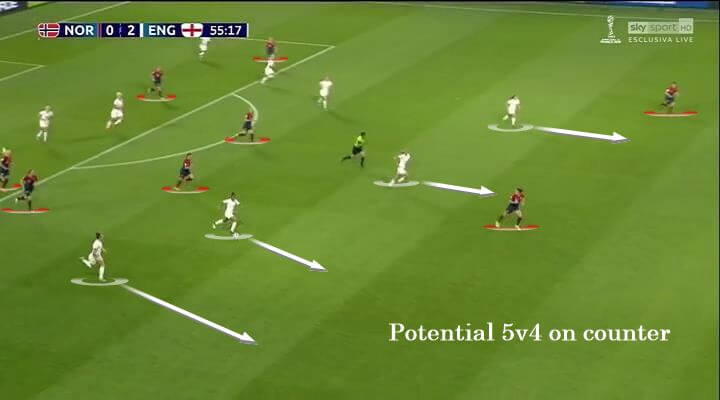 A similar scenario followed shortly after, with another counter-attack leading to a free-kick in a dangerous position. Georgia Stanway’s delivery was cleared, but a Norway defender was deemed to have fouled Houghton and a penalty was awarded. Parris stepped up to add further gloss to the scoreline, but her effort was well saved by Ingrid Hjelmseth.

Despite their opponents causing them genuine threats, this was arguably England best performance in the tournament so far. Up until this point, they have managed to secure win after win without playing to their full potential. Neville’s Lionesses are growing with each game, and there’s every chance that his side could go all the way.