Following victories against Scotland and Argentina, England went into the final game in group D hoping to maintain their 100% record in the FIFA Women’s World Cup. A single point from this encounter would be enough to secure top spot, while their opponents Japan would also qualify for the knockout stages regardless of the result.

Despite facing their most accomplished opponents thus far, the Lionesses claimed a 0-2 win and will face a favourable draw in the round of 16. This tactical analysis will examine how Phil Neville’s side managed to overcome the 2010 champions.

Asako Takakura set her team up in a 4-4-2 formation, with Kumi Yokoyama and Mana Iwabuchi leading the line. Youngsters Jun Endo and Rikako Kobayashi provided the width in attack. Fullback Aya Sameshima added some much needed experience to the side. 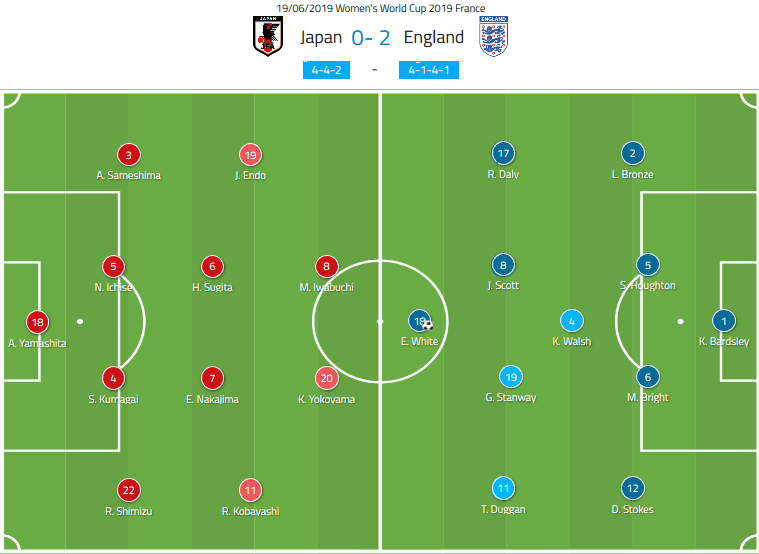 Neville elected to rest some of his star players for this game, with Nikita Parris, Fran Kirby and Arsenal winger Beth Mead all left on the bench. Barcelona’s Toni Duggan was handed her first start in the competition, while Ellen White returned to the line up having scored in the opener against Scotland. Chelsea’s Millie Bright also came back into the side, replacing Abbie McManus.

Although they had the majority share of possession, it wasn’t all plain sailing for England. Pivot player Keira Walsh was often marked out of the game by Japan’s two strikers, preventing the Lionesses from playing through the thirds with ease.

Yokoyama and Iwabuchi positioned themselves between the opposing centre-backs and Walsh, regularly scanning over their shoulders to retain a cover shadow over the Manchester City midfielder.

Such was Japan’s overall level of compaction, Steph Houghton and Bright also had limited options for penetration beyond the holding player. In an attempt to progress the play, one of the attacking midfielders would drop deeper to receive on the half-turn, but they rarely found any joy with this approach.

In the image below, Walsh is marshaled by both Japan forwards. Georgia Stanway offers an alternative option for Bright to play forward. With immediate pressure coming from her marker, Stanway could have made a one-touch lay-off to Walsh, who would then have been able to receive facing forward and behind the cover shadow.

Instead, she tries to progress the play herself, resulting in a turnover for Japan. 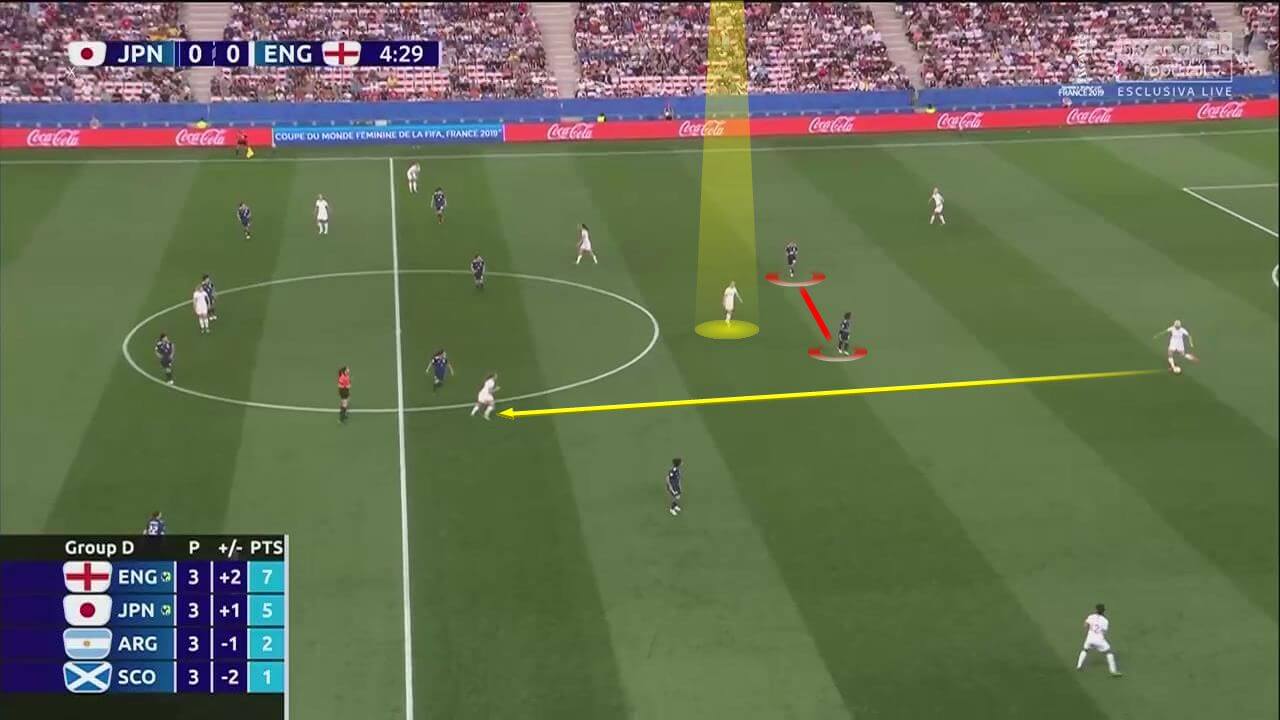 The failure to think one step ahead hampered England’s build-up play throughout the first half. In the next example, Yokoyama’s positioning allows Bright to make a rare pass through to Walsh. Instead of scanning and having an idea of what her next pass will be, the 22-year-old takes a touch and looks up to assess her options.

Three Japanese players collapse in on the space around her and force a misplaced pass. Once again, Walsh could have been better supported by her offensive midfielders in this instance. Duggan, who had moved inside from her base position on the left, might have moved closer to Walsh and offered the option of a link pass through to Jill Scott in the opposite half-space. 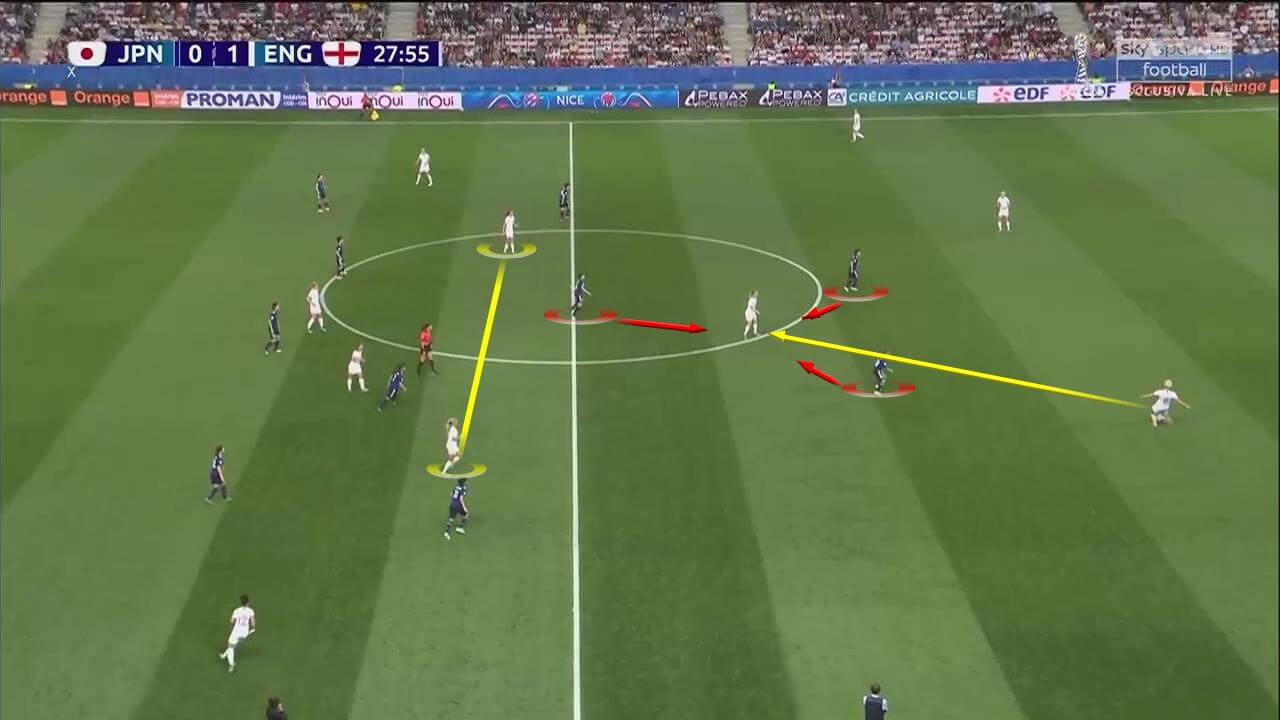 Japan’s cover shadows, along with their ability to maintain compaction in central areas made it difficult for their opponents to progress through the middle. England didn’t help themselves with sloppy passing, as well as a lack of invention to overcome the obstacles in their way.

They did take the lead in the 14th minute however, profiting from a moment of instability in their rival’s defence. After recovering the 2nd ball from a Japan corner, Stanway played Ellen White through with a perfectly timed through ball. The 30-year-old striker took her chance in typically calm fashion, registering her 3rd goal of the tournament in just two starts.

Japan effective up to final third

Japan’s build-up play was a lot smoother than their counterparts, patiently circulating possession deep in their own half in search of an opening. Following their goal, England often stepped off the first line, allowing them to shift the play horizontally under little pressure.

In the image below, we see the Japanese players oriented towards the left, drawing the opposing block over in the process. Once this has been achieved, they move the play across to the right, where space now exists to progress the attack. 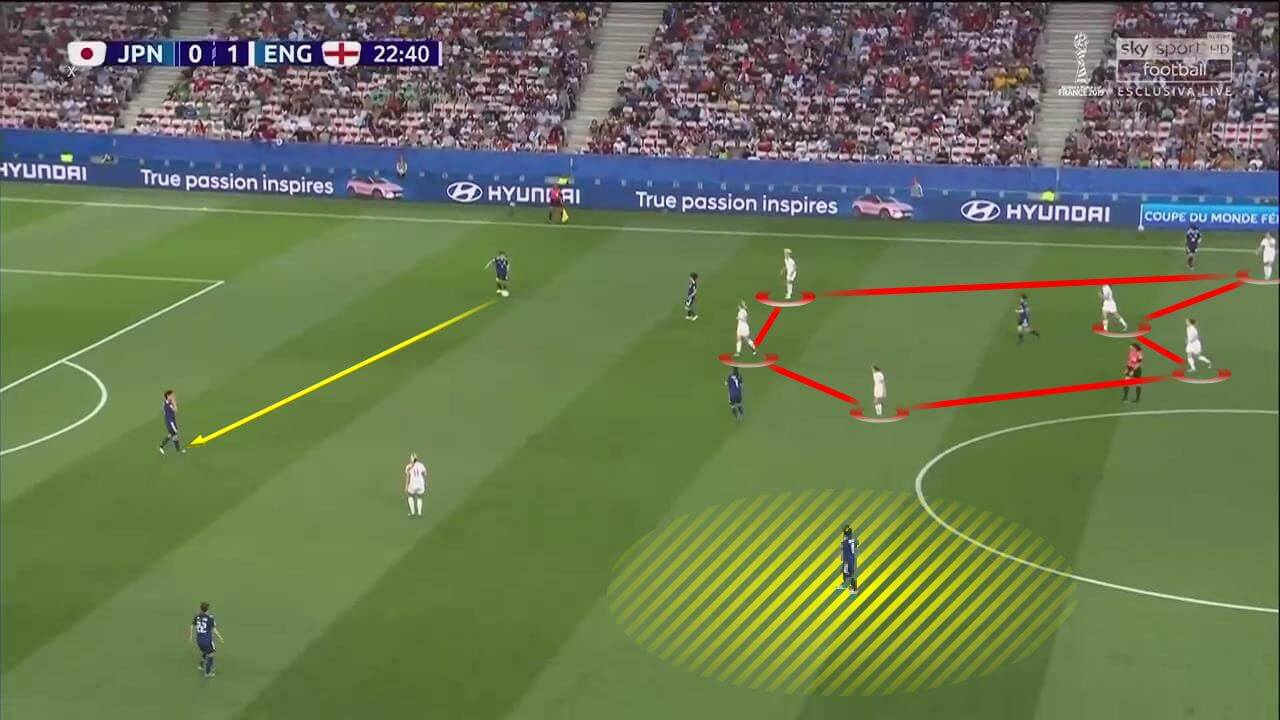 With Stanway and Duggan’s attention drawn to the holding midfielder and right-back respectively, a central passing lane is open for Saki Kumagai to find Kobayashi. England respond with intense pressure to close out space, and their superior physicality proves decisive. 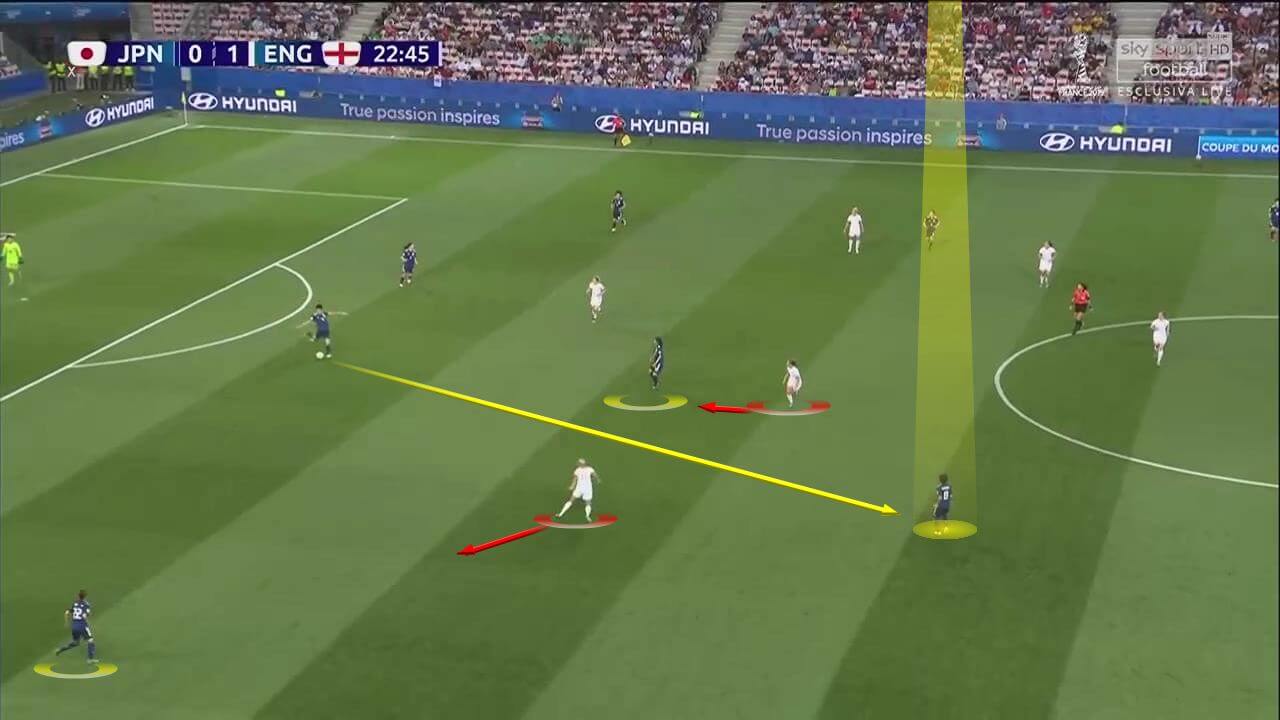 Along with suffering from a lack of power up front against Bright and Houghton, Japan were also wayward with their passing in the final third. In the example below, they again find a way to progress, with sharp incisive passes cutting through England’s midfield line.

The link play and movement is excellent, with right-back Risa Shimizu making an overlapping run from deep to support. However, the move ultimately breaks down in the advanced wing after Yokoyama puts too much weight on her ball through to Shimizu. 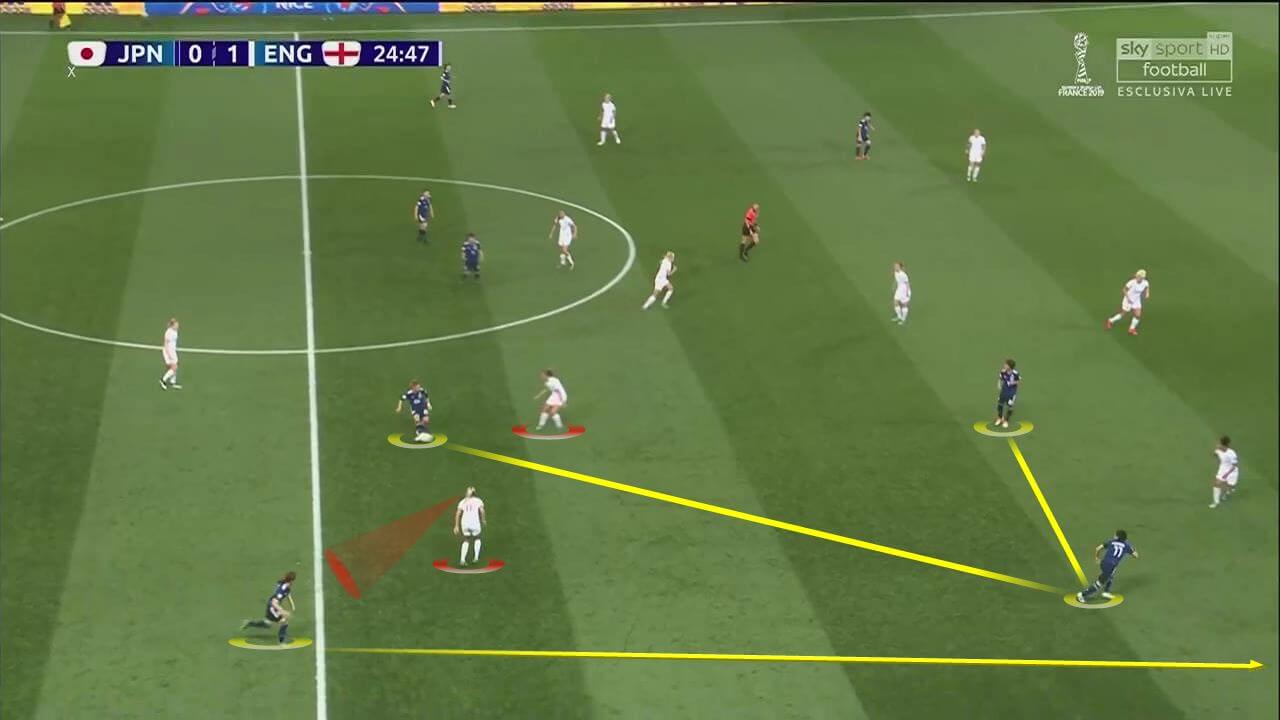 The final example, shown below, again highlights Japan’s issue with executing the final actions of the attacking phase. A potential two against one exists on the right after Yokoyama manages to receive between the lines. Bright is drawn out of the back line and towards the ball, with Demi Stokes isolated against Kobayashi and Shimizu. The pass from Yokoyoma is played behind Shimizu, resulting in the move breaking down. 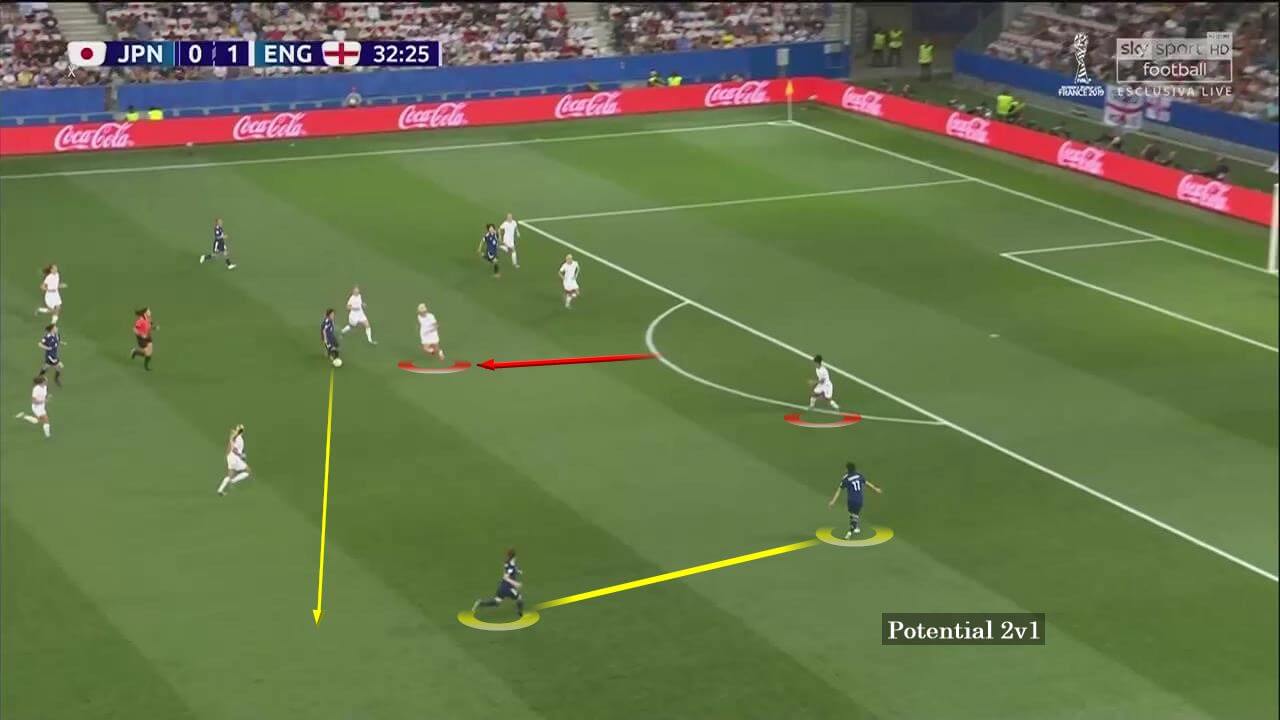 Although they managed 16 shots on goal, many of Japan’s efforts were speculative and only four hit the target. Better passing in the final third might have seen them create more clear-cut chances.

As we saw previously, England found it difficult to break through in central areas due to Japan’s effective use of cover shadows. In the second half, Neville’s side looked to improve their combination play in the wide areas in the hope of creating better access to the attack.

The fullback, winger, and attacking midfielder on both flanks regularly engaged in rotations to disorganise their opponent’s marking schemes. This often resulted in one of them becoming free.

As shown below, winger Rachel Daly carries the ball infield, drawing pressure from three Japanese players. This frees up right-back Lucy Bronze to roam forward, while it also creates space out wide for Scott to move into.

Daly finds Scott on the touchline, before the 32-year-old’s cross is cleared at the front post. 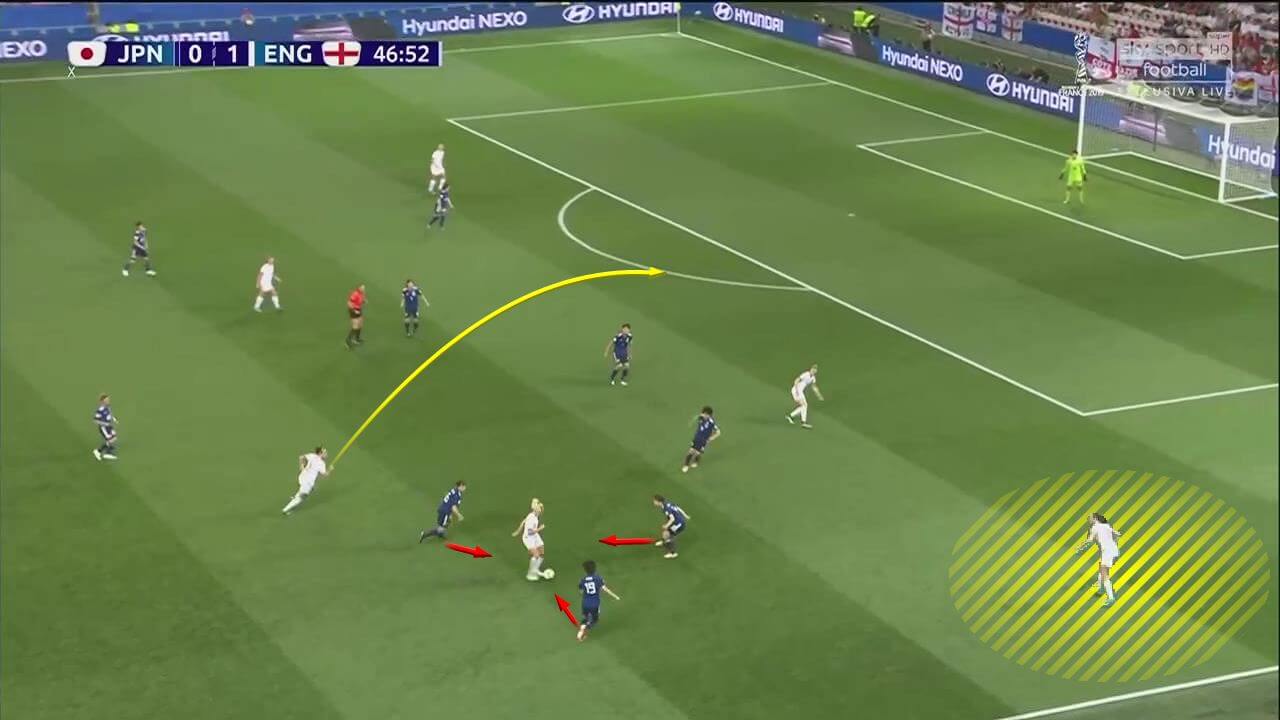 Along with the use of rotations, England also formed better structures on the wing in order to create the conditions for quick combinations. In the example below, the three players mentioned in the previous sequence join up with Walsh to form a zig-zag set-up on the right.

This helps them to not only create numerical superiority over their opponents but also allows them to bypass the pressure with one-touch passing. 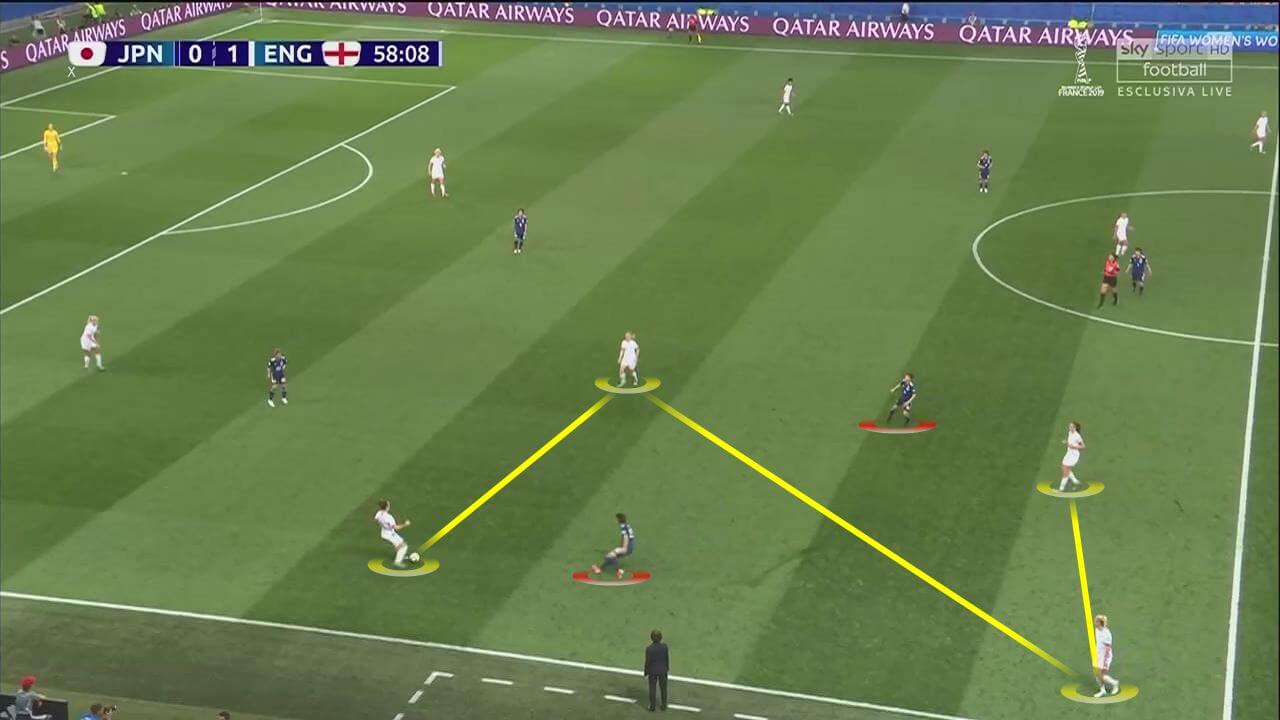 Despite recording fewer shots on goal than Japan, England come away with a well-earned victory. They were more decisive in the final third, with Ellen White again proving to be of critical importance to their chances in this tournament. The newly signed Manchester City forward put the game beyond doubt in the 84th minute following an excellent through ball from substitute Karen Carney.

Throughout the group phase of the FIFA Women’s World Cup, the analysis has shown us that Neville’s side have shown patience in their play and can go into the round of 16 with confidence. However, their composure when building out from the back against pressure or marking schemes will need to improve if they are to progress to the competition’s latter stages.

Japan also exit the group successfully having picked up four points. Takakura will be anxious for her team to become more clinical in the final third in their next fixture.