The eighth edition of the FIFA Women’s World Cup 2019 has surpassed all expectations. With an average of three goals per match, this tournament has seen a lot of attacking prowess on display. Now, we reach matchday three as we get an idea of how well-prepared each team is. In this tactical preview, we shall take a look at the teams of USA and Sweden. Using statistics, we can create an accurate analysis of the tactical trends to watch out for from each side.

The USA versus Sweden is the most recurring match in tournament history with five fixtures between the two so far. In the 2016 Women’s Olympic Football Tournament Rio, Sweden knocked the USA out of the tournament. Sweden have managed a draw and a win from the last two times they faced each other but the USA have three wins.

The USA have been one of the most impressive and consistent teams in not only this tournament but these past few years, too. In the FIFA Women’s World Cup 2019, they have scored 16 goals and conceded none. Out of these 16, an unbelievable 13 came against Thailand. That is enough to show what kind of blistering form The Stars and Stripes are in. Hence, it’s no surprise that they lead Group F.

Sweden are second in Group F but they are on level with USA. Scoring seven goals and conceding one, the results would usually be considered good but they are completely overshadowed by the huge victories of the group leaders.

A 4-1-2-3 formation could be Peter Gerhardsson’s choice for the match tonight. With a spot in the next stage secured, he could make some changes and allow a few players to enjoy the big stage. Jonna Andersson might be the only change in Sweden’s defensive core as she replaces Hanna Glas. Olivia Schough would form the midfield with Elin Rubensson and Caroline Seger. Up front, Mimmi Larsson and Madelen Janogy will be responsible for providing the goals alongside Lina Hurtig.

Jill Ellis has been rotating her squad in the last two games and there is no doubt that she would continue to do so. Julie Ertz could return to being a holding midfielder, leaving the centre-back spot for Becky Sauerbrunn. Crystal Dunn and Kelly O’Hara would occupy the full-backs spot. Allie Long and Rose Lavelle are in line for their first start in the competition. The striker spot is tough to decide as both Alex Morgan and Carli Lloyd are fit to play in that position.

The USA are likely to play a 4-3-3 formation. The two midfielders other than the attacking midfielders will look to position themselves between the opposition’s defensive and midfield lines. Jill Ellis’ team will look to stretch the field. The full-backs will drift up when passes from the defence to the attacking midfielders or wingers aren’t possible. If possible, the defensive line will push up during attack to compensate for the sparse midfield. The lack of numbers in midfield is a result of the two midfielders looking to be in advanced attacking positions.

Sweden’s formation is likely to be a 3-5-2 or a 4-2-3-1. During the defensive phase, it will transition into a 5-4-1. This mid-block will look to make the most of USA’s midfield lack of numbers. When the USA look to play in a compact way with the central defenders pushing the defensive line up, Sweden can create situations to their favour easily. This will be possible due to the lone striker and the midfield four getting numerical superiority.

In terms of individuals, Rose Lavelle could play an important role with her excellent through balls and good vision. Sweden’s defensive mid-block is a problem but it can be solved by USA’s young sensation Lavelle and either of the three forwards dropping back. One of the defensive midfielders from Sweden’s double pivot and one of the midfielders will be sure to try and use a light-press on Lavelle. This is why the forwards dropping back will be very important for Ellis’ team.

Use of the wings

The USA are aware of their midfield problems. That’s why the ball will usually be carried out by the centre-backs and then passed to the full-backs. The full-backs can then pass to one of the attacking midfielders between the lines. An important tactic used by the Stars and Stripes is to make sure the channels along the wings are occupied. They will look to create favourable situations down the wings. This will be a major threat to Sweden as USA’s strikers, especially Morgan, are very good options to pull-back to or to cross to.

Isolating Rapinoe 1v1 or 2v2 with the full-backs means that she can use her pace and dribbling to supply the ball into the box. Though this will be a problem if Sweden’s defensive midfielders look to double-press her with the help of the full-backs, this situation would free up space for Lavelle to drive into.

How the USA could anticipate Sweden’s attack

Sweden have the tendency of building their attacks from the back. They would move the ball in a conservative way rather than making risky passes into the opposition’s half. This allows them to hold possession more efficient and dictate the game at the same time.

Gerhardsson’s side would stretch their shape out with the aim of forcing the opponent to do the same. It will create spaces between the lines for the midfielders to move in and turn themselves into an available passing option. 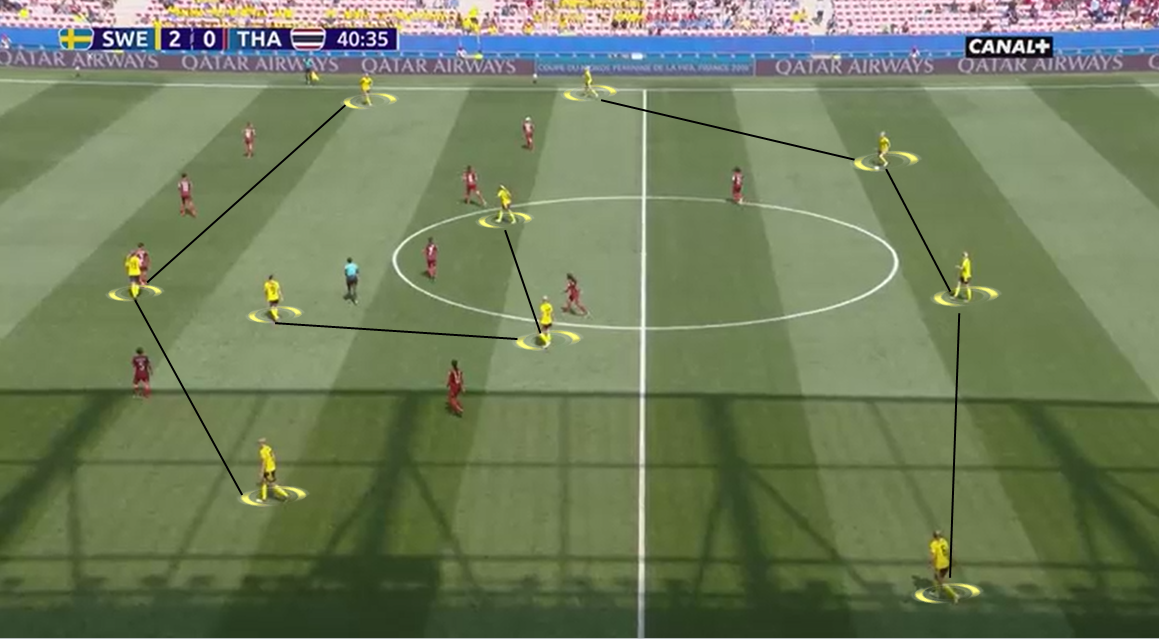 Another interesting point from Sweden’s build-up is they always try to create passing triangles whenever possible. Again, their main aim is to hold the possession and try to convert it into chances. By creating the triangles, they could bypass the press coming from the opponent while still moving the ball up the pitch.

In the shot below, Chile had the numerical superiority with five players surrounding that area. But by creating two passing triangles, the Sweden players have managed to move the ball from the middle third into the final third and created a significant chance at the same time. 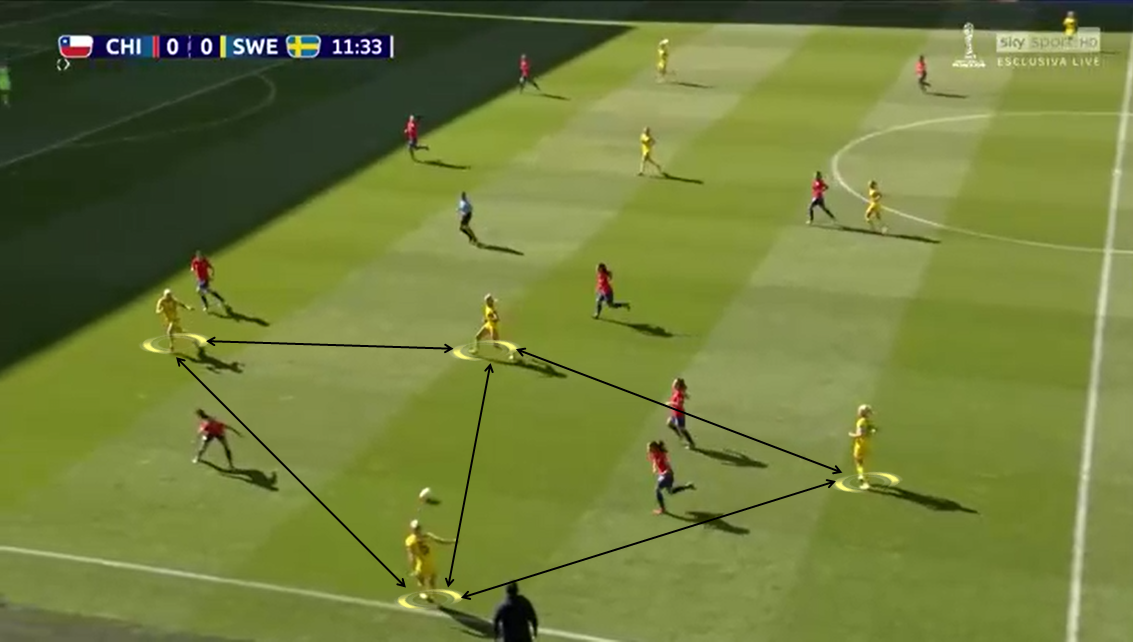 Inside the final third, Sweden have a wealth of attacking possibility. But the main option that they might use is making crosses into the box. The high positioned full-backs would pick up the ball from the defenders and dribble her way forward. Meanwhile, the attackers and attacking midfielders would swarm the box, waiting for the cross to come in.

There is also a different possibility that Sweden could make the most of. If the full-backs couldn’t make the cross, they could choose to make lofted through balls like the shot below. Her teammates from the opposite flank would move into the spaces between the defenders and wait for the ball. 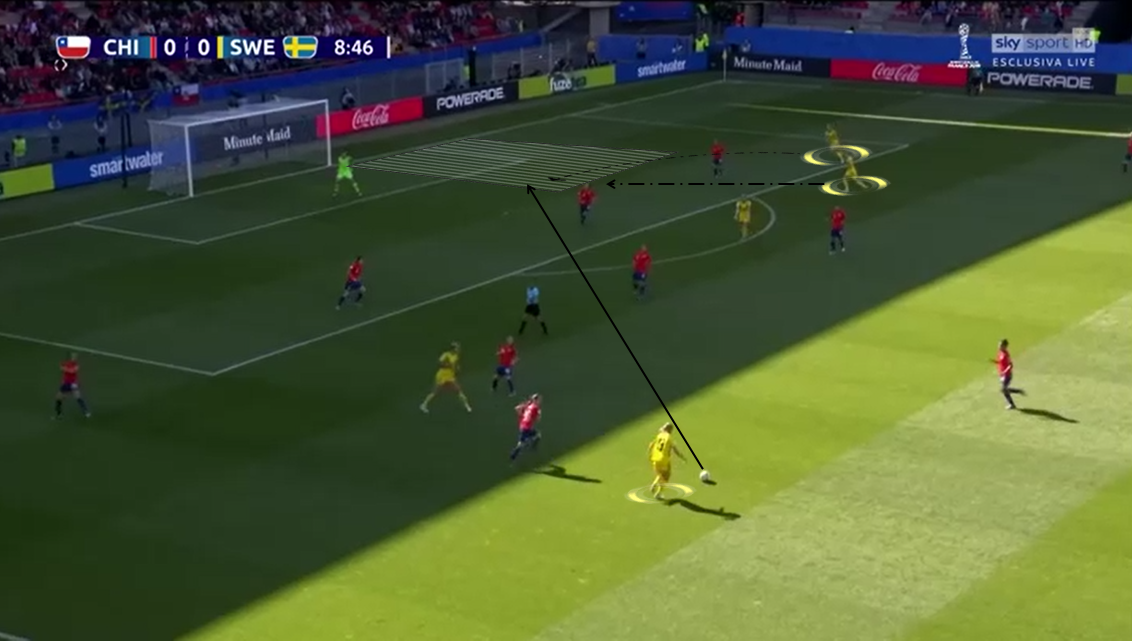 Still, against a team who defends in a similar formation like the USA, Sweden could struggle for a period of time. Ellis’ side uses a 4-3-3 defensive structure with a few of turning into a 4-5-1 if the opposition moves the ball into their half. They create a mid-block inside their own half and players would move in a flexible way. The aim is to press the ball carrier and create an overload in the surrounding area. 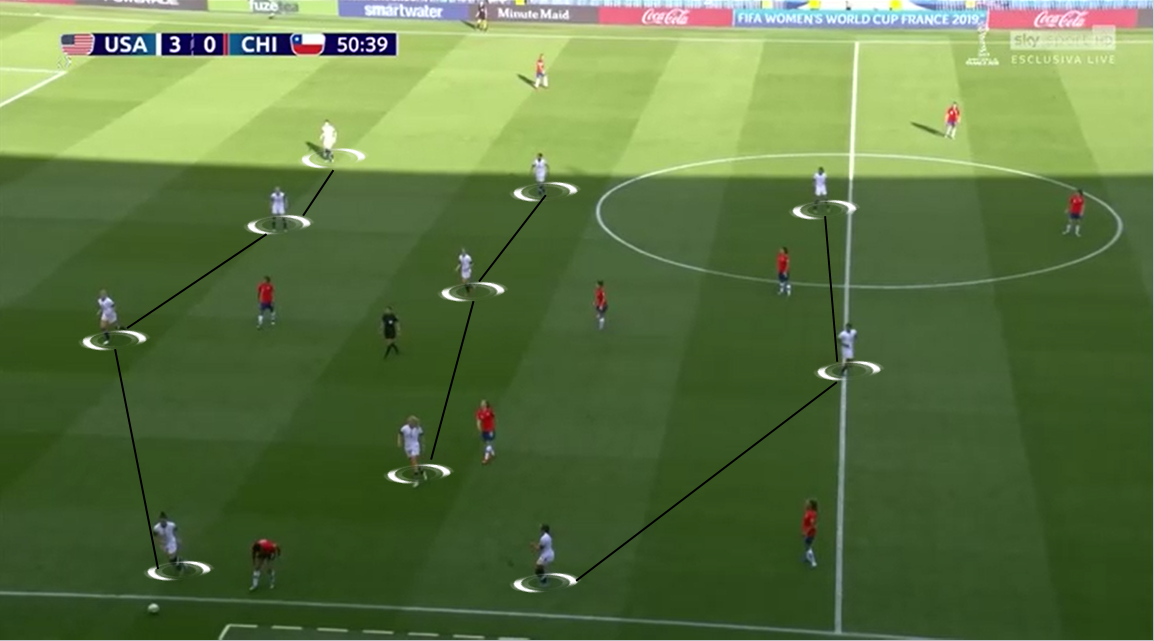 If the USA lose possession high up the pitch, they trigger the press immediately and create an overload right inside the opposition’s half. Using the strikers to form the first pressing line and the midfielders as the second, their aggressive press is hard to break down. Every player involved is capable of sustaining the press at a high and aggressive level until they can recover possession.

Sweden need to be aware of this as they tend to move the ball at a low tempo. This could allow the USA to win the ball high up the pitch and create dangerous chances towards Alyssa Naeher’s goal. 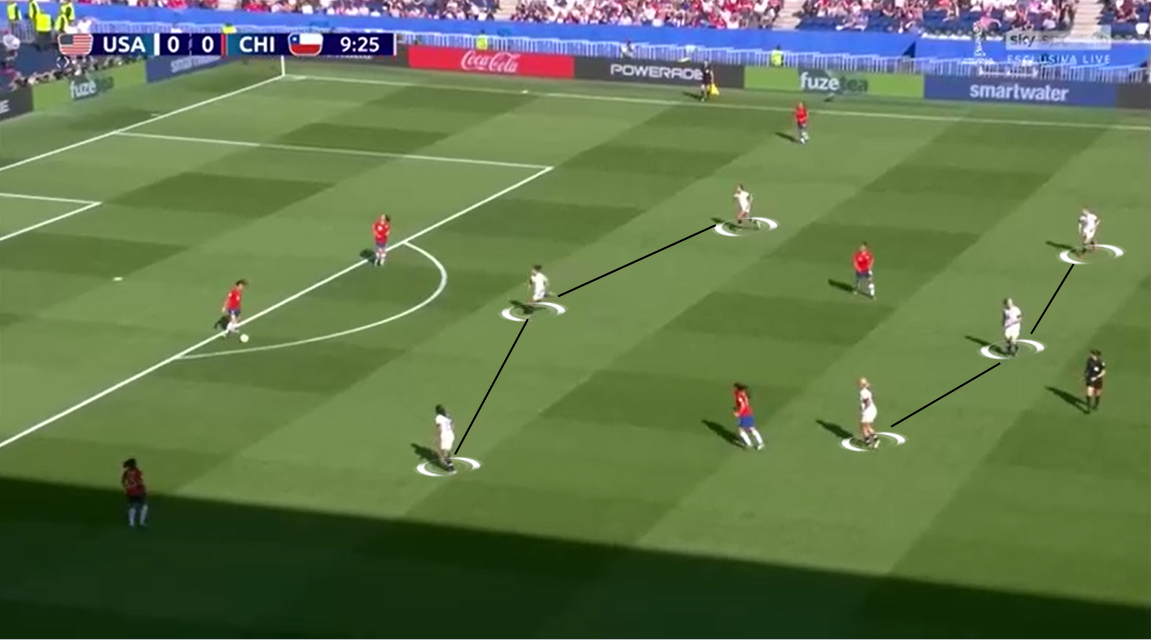 Sweden and the USA is the rivalry with a very good history. They have faced each other five times in the competition and the North American side is currently taking the lead with three wins. But in their recent three matches, including a match at the 2016 Olympics, things have slightly leaned towards the European side. With 23 goals among both sides in this year’s competition, we can hope for a spectacular performance being provided by these two.