Scotland faced Argentina in a winner takes all game at the Parc des Princes in the FIFA Women’s World Cup. Both teams were battling it out to be one of the four best third-placed teams who progress to the next stage of the competition. Only a win would do for both. What occurred was perhaps the most dramatic and controversial game of the competition thus far. Scotland lead Argentina by three goals to nil late into the second half only for the South American side to draw level following a retaken penalty late into stoppage time.

In the following tactical analysis, I will discuss the tactical themes throughout this matchup including but not limited to, Scotland’s use of progressive and line-breaking passes from defence and Argentina’s commitment to direct passing and winning of second-balls from Sole Jaimes. 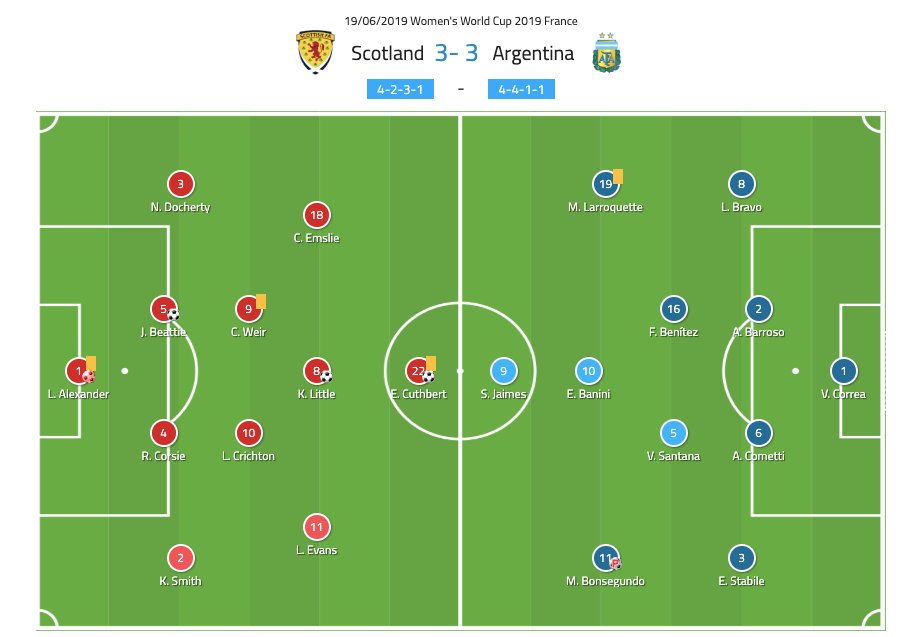 Both sides lined up in similar formations and these formations were more or less reflected when the game was in progress. The front two of Little and Cuthbert for Scotland would often interchange and drop off the front looking for space and the ball. Argentina’s number nine Sole Jaimes tended to position herself up against the opposing defence more often than not looking to win headers and knockdowns. Both sides wingers stayed high and wide and looked to work into 1v1 situations.

Scotland’s use of line-breaking passes

As noted in our tactical preview of Scotland, both Corsie and Beattie at centre-back are very capable on the ball and have a keen eye for a progressive pass. This ability was on show throughout this game against Argentina. 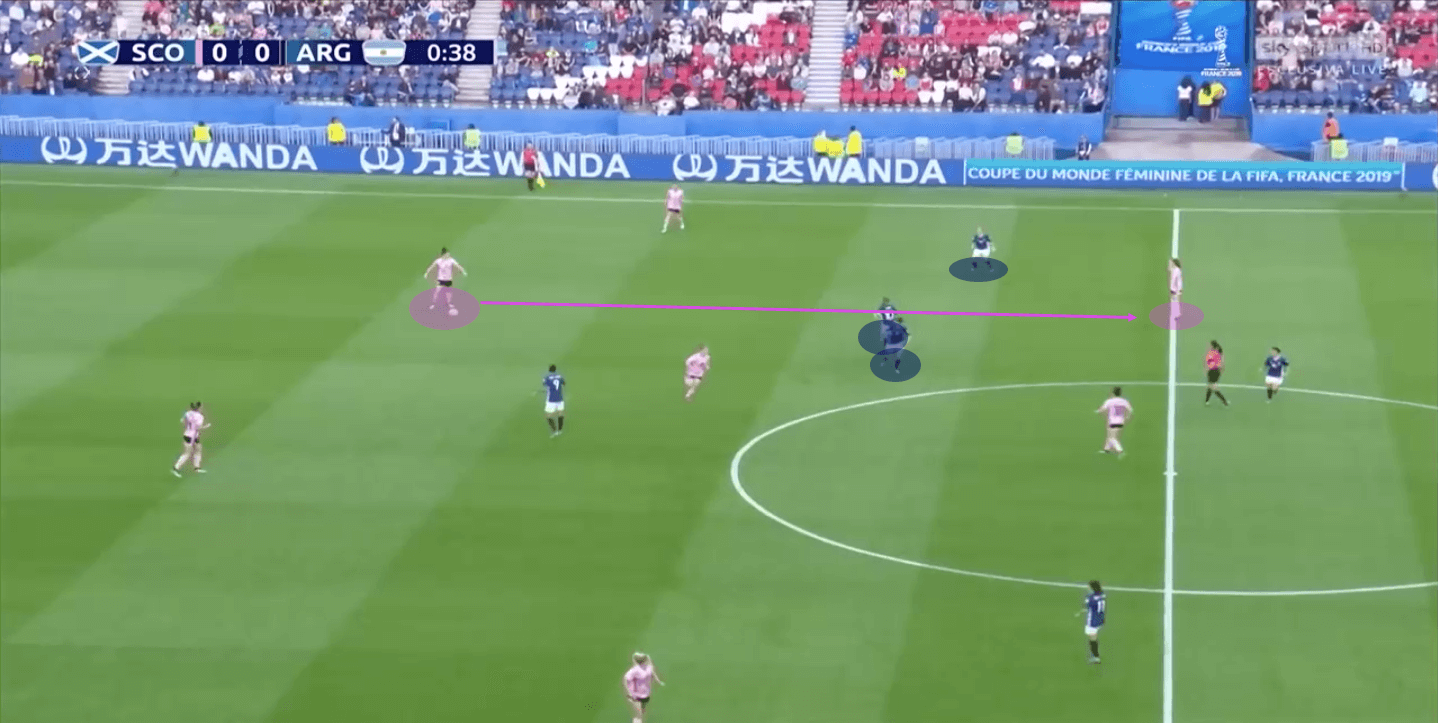 Caroline Weir is a dangerous player for Scotland and as such, they wanted to get her on the ball in dangerous positions as much as possible. Just 38 seconds into this FIFA Women’s World Cup match and Beattie was displaying her eye for a pass. She picks out Weir with a low hard pass, taking out three Argentinians. Weir can then turn and run into space which is one of her strongest assets as noted in our preview. 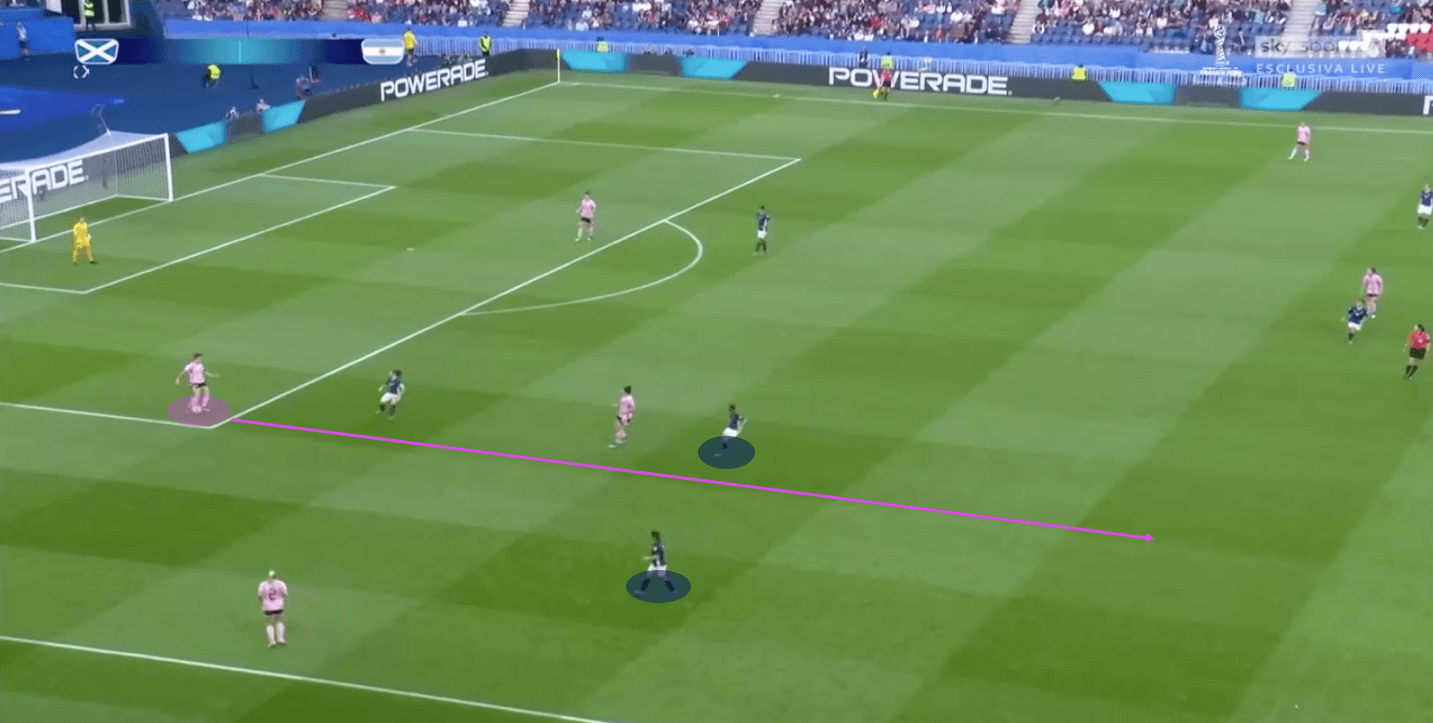 This time, in the image above, Corsie is showing her passing ability. She lifts the ball between two Argentina defenders. 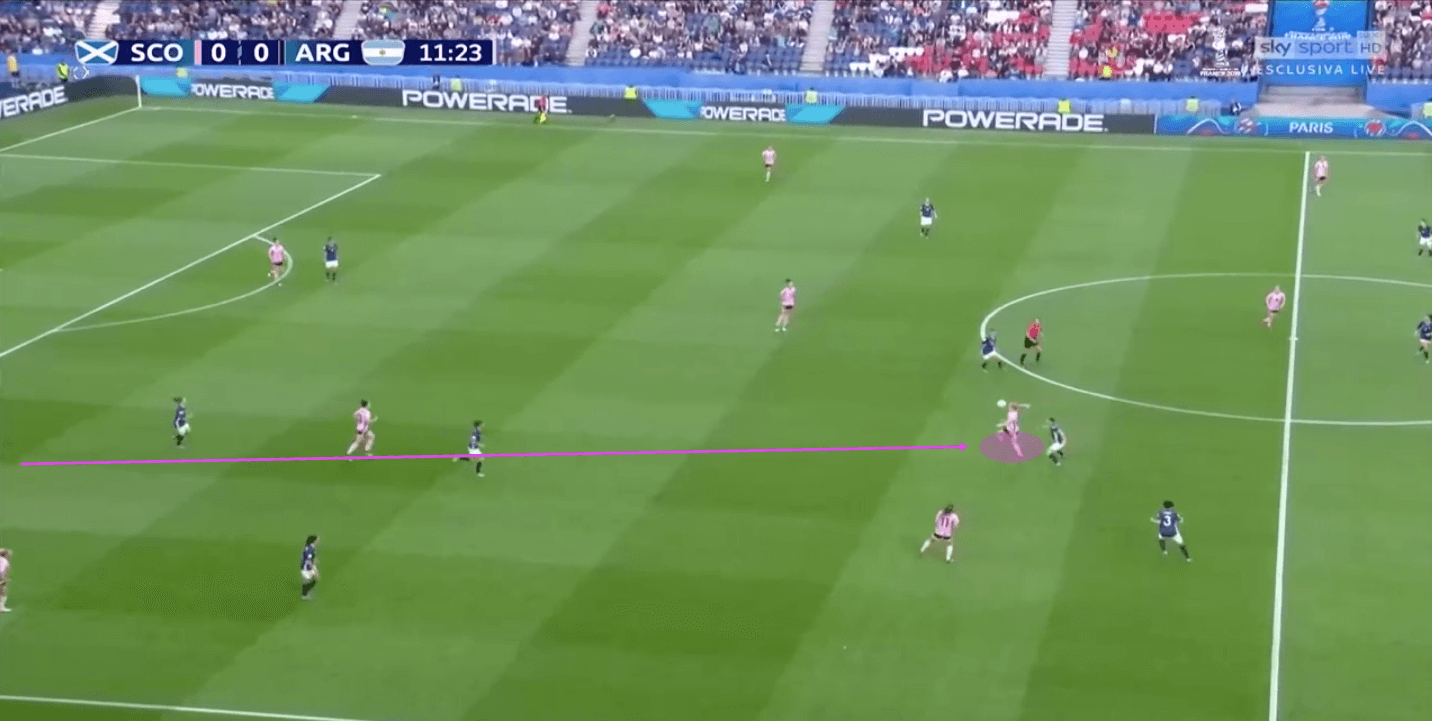 The ball finds Cuthbert who has dropped from the central striker position, bringing an Argentina centre-back with her and opening space in behind. 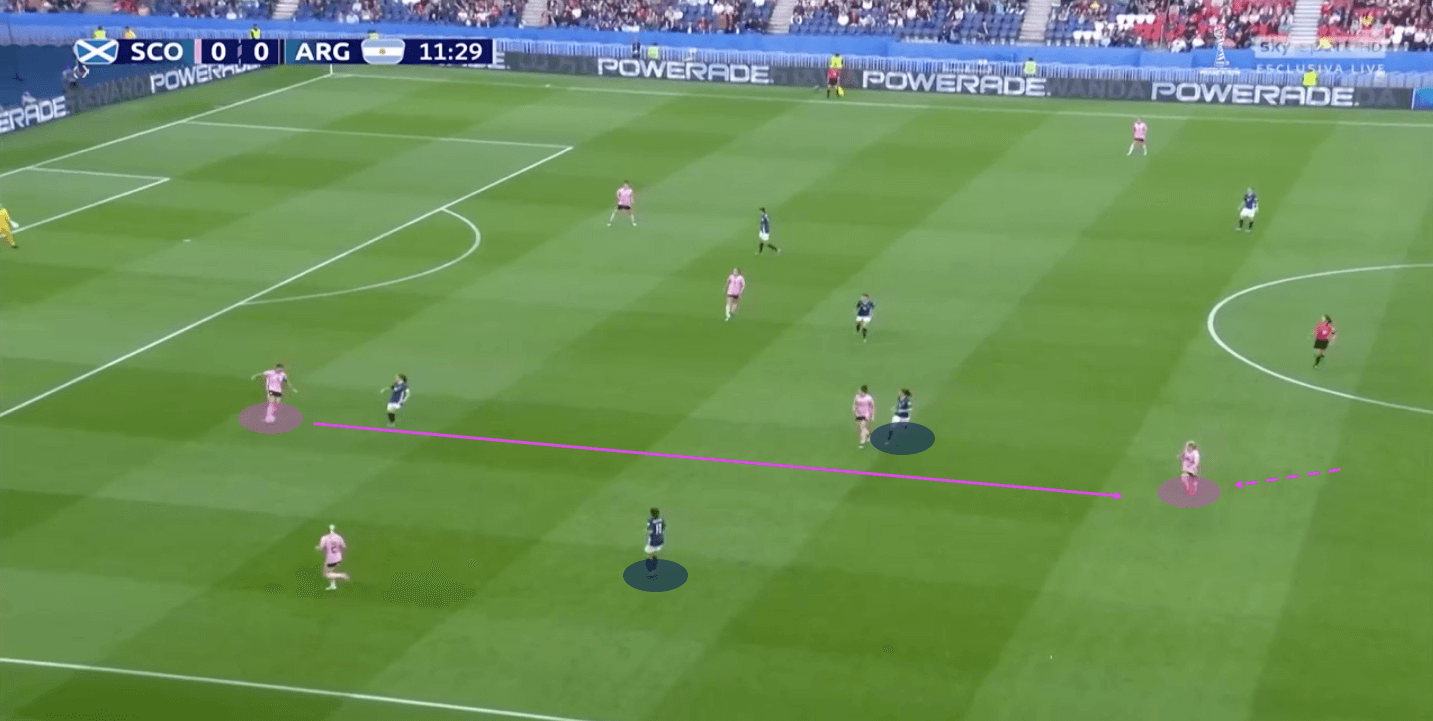 Cuthbert can’t capitalise and the ball is recycled back to Corsie. This doesn’t deter either the Scottish centre-back or centre-forward, as Corsie again drills the ball between two Argentina defenders to find Cuthbert in space. 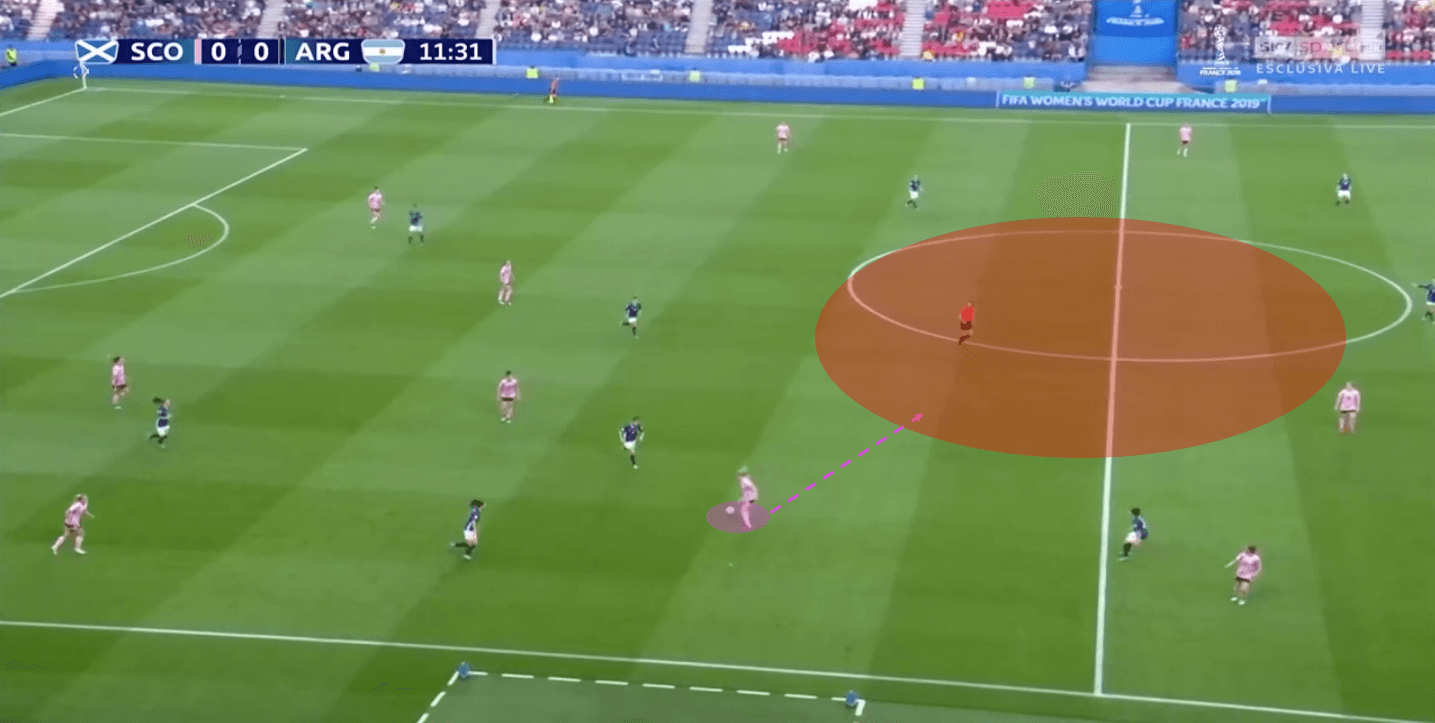 By inviting the pressure from the Argentina midfield and attack, Scotland can open up huge spaces in the midfield for the dangerous Cuthbert, Little and Weir to run into. 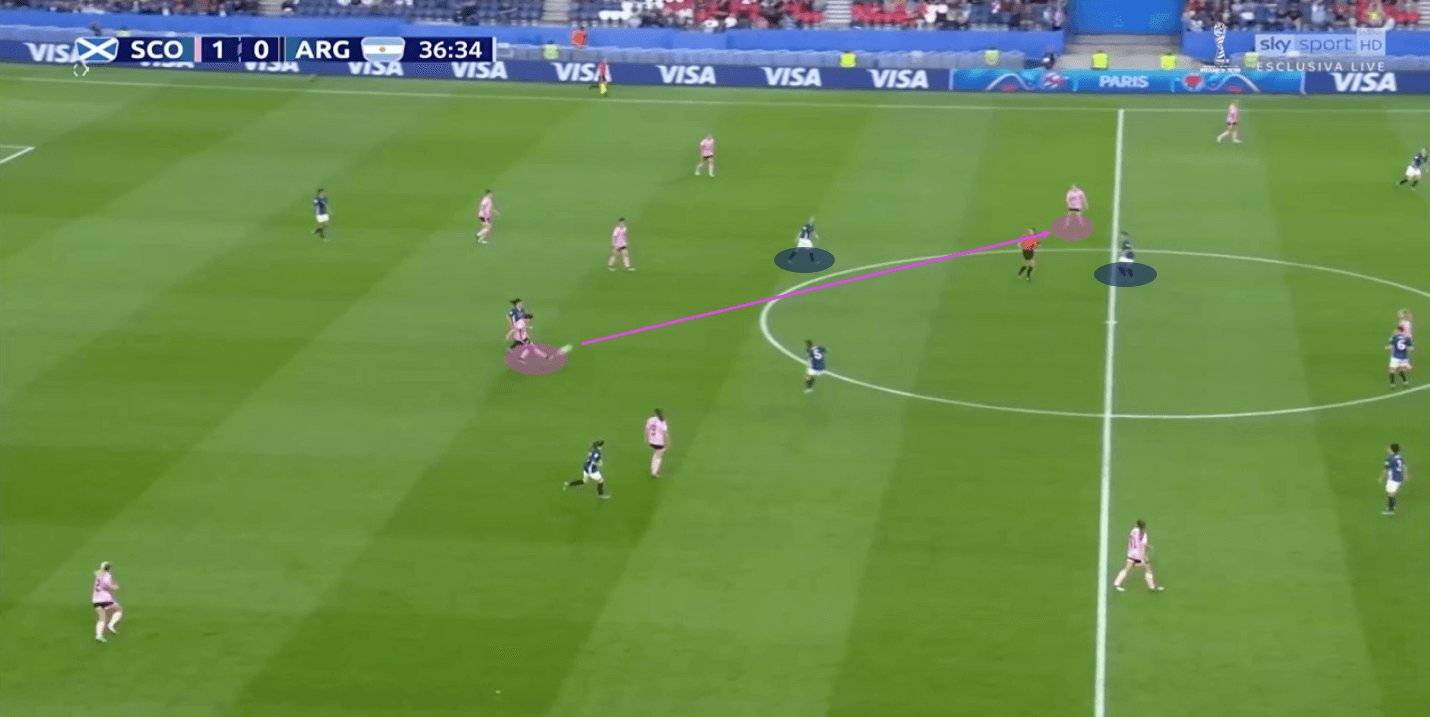 In the above example, Corsie has dribbled out of defence in order to attract pressure. When she is pressured she releases the ball through the eye of the needle to find Weir. 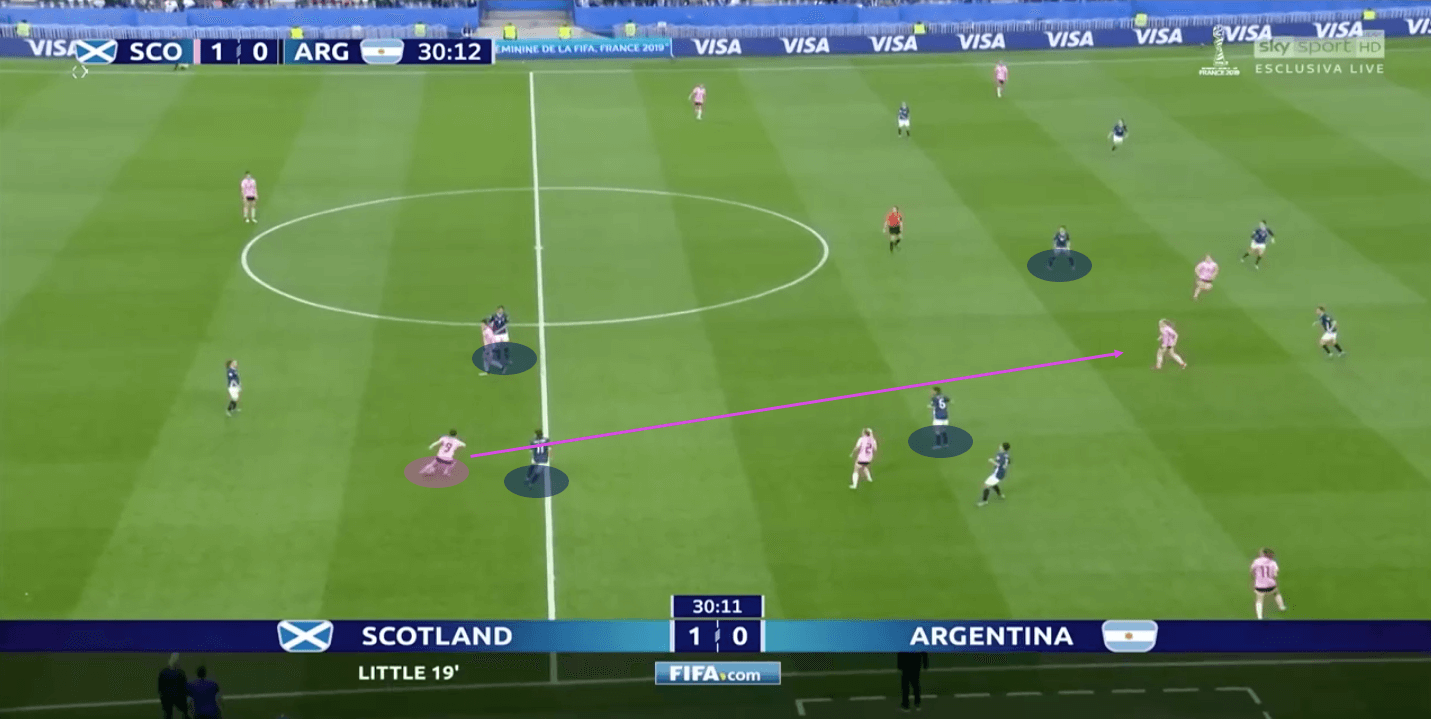 Scotland also showed that they are more than capable of completing this kind of pass in more dangerous areas. In the image above, the ball has dropped to Weir just inside her own half. She immediately sees Cuthbert and Little in space and drives the ball first time into the feet of Cuthbert who can turn and play in Little or Evans on this near side. 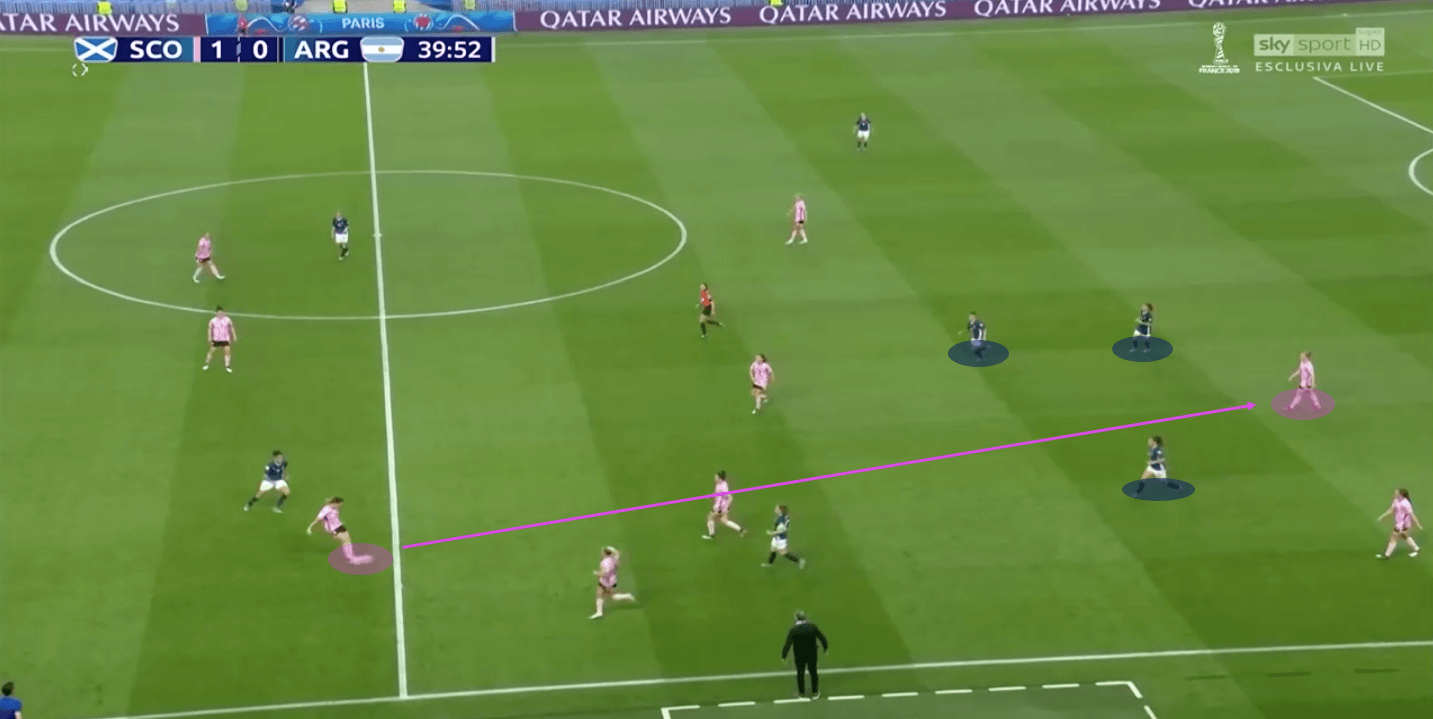 In a similar example, the ball has again dropped to a Scotland player who immediately looks for a progressive pass into the feet of an attacker. 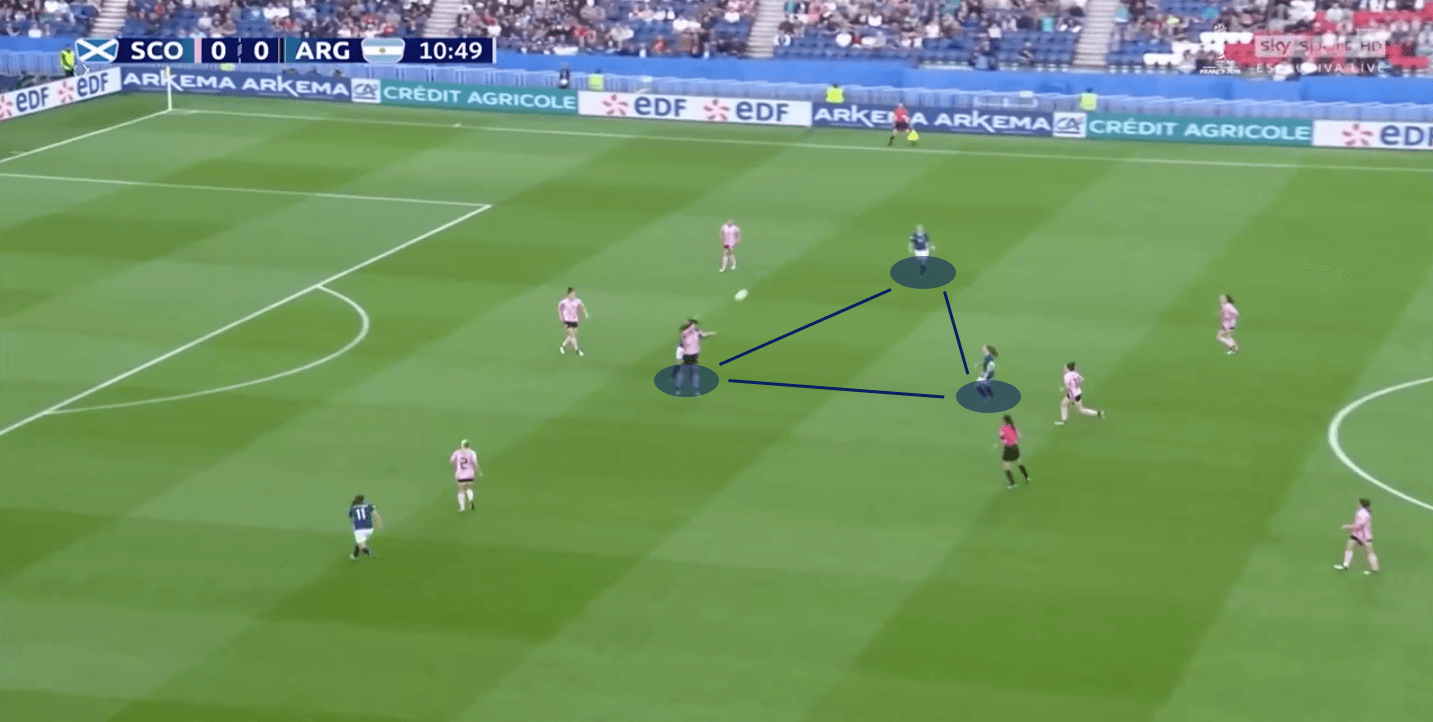 Sole Jaimes is a physical handful for defenders. But, she also has incredible vision and ability to hold-up play and link with teammates. Argentina’s main attacking plan was to hit direct balls in the air towards the striker and look to win the second ball from her knockdowns. In order to do this, Banini would always look to be in close proximity to her with the ball-near winger also tucking in looking to pounce on the second ball. When Sole Jaimes was left isolated it became very difficult for Argentina to sustain any kind of pressure on Scotland’s back four. If Sole Jaimes was able to bring the ball down when she was isolated, she was immediately swamped by either Beattie or Corsie. 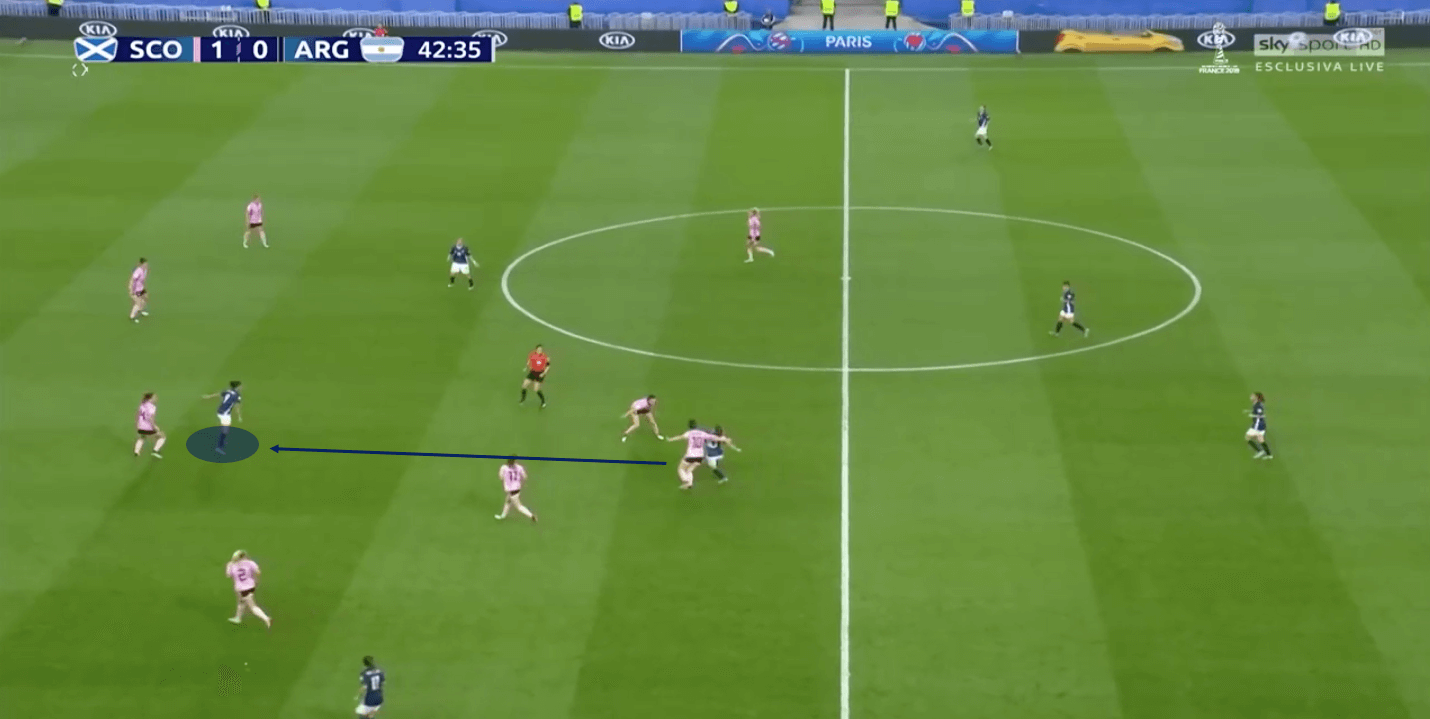 Sole Jaimes link-up play is on full display in the image above. The ball is played into her feet, with a Scottish defender on her back. 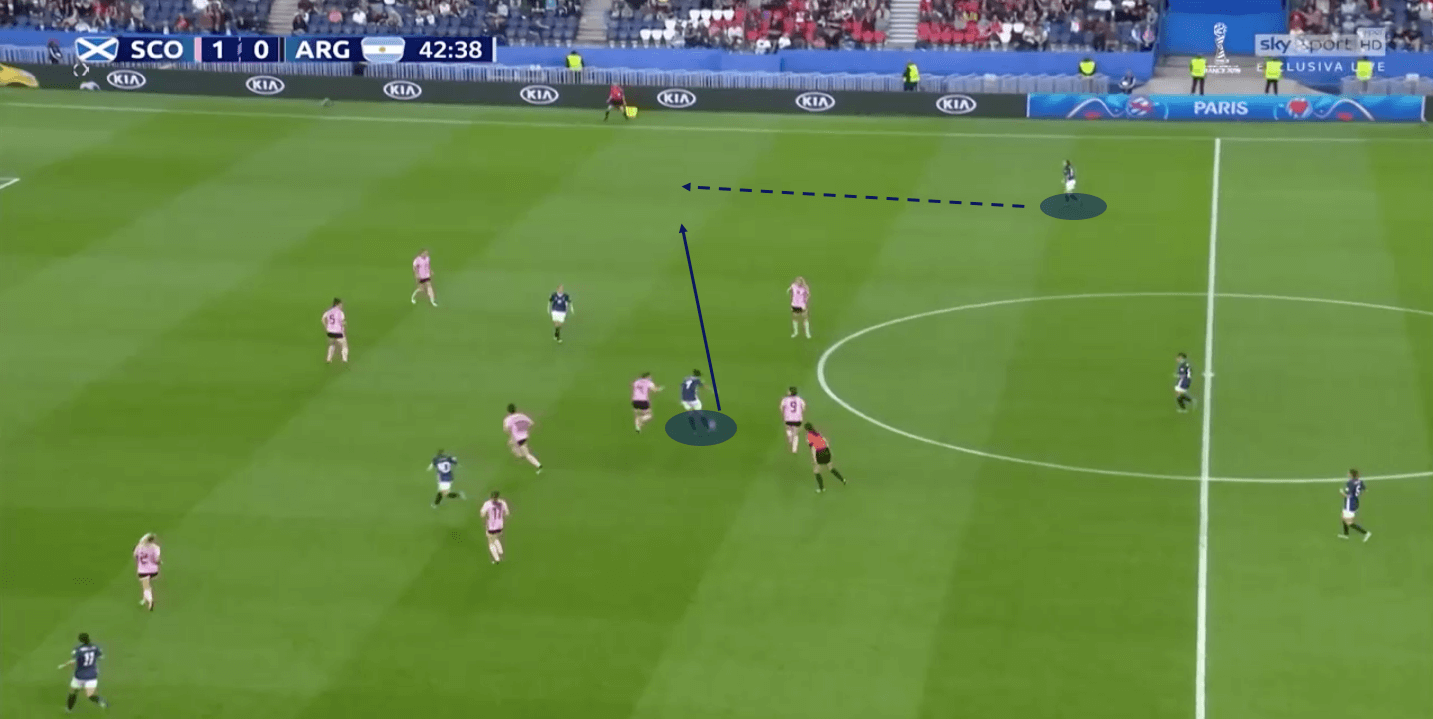 She brings the ball in, makes half a yard for herself before playing the ball into the path of the onrushing right-back. After she has done this she makes a break for the box.

When Sole Jaimes was substituted one might have assumed that Argentina’s style would have changed. However, they stuck to their guns and it paid off. 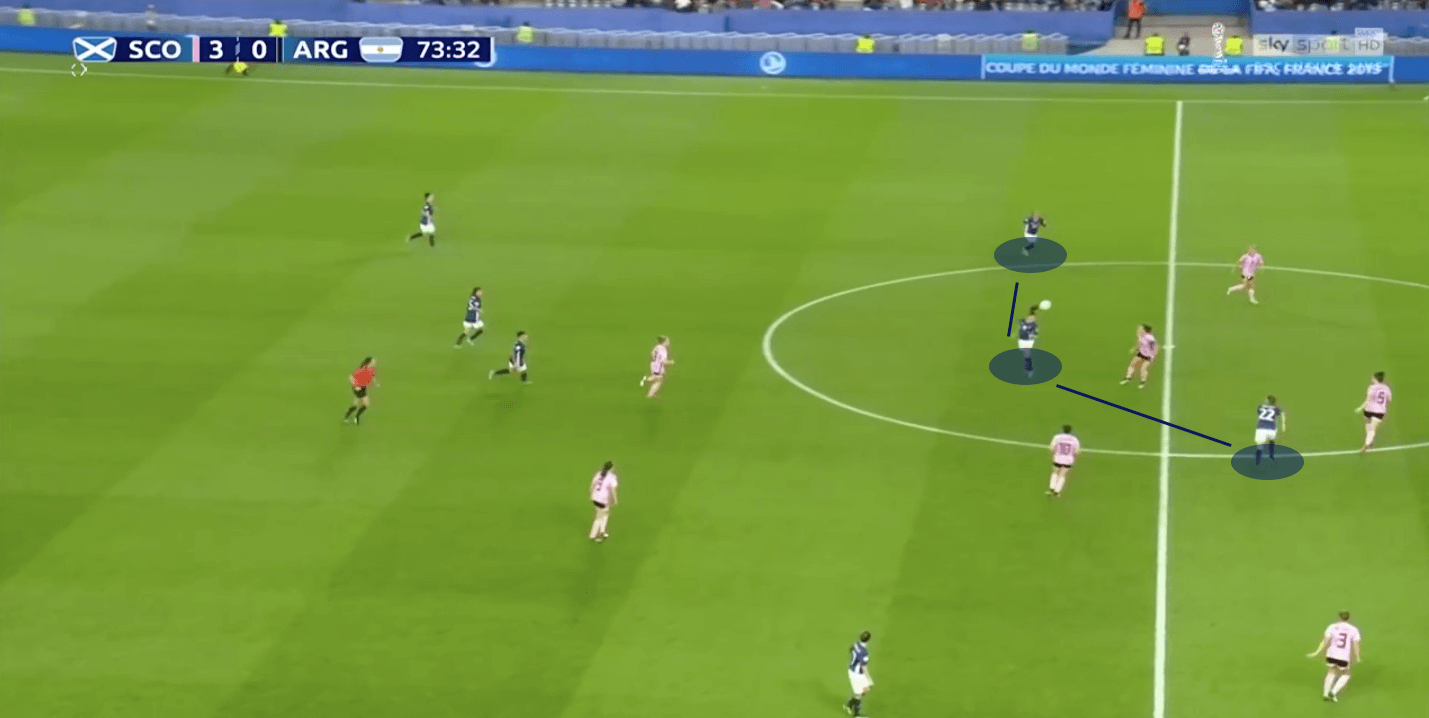 The image above is somewhat similar to the set-up that Argentina operated with when Sole Jaimes was on the field. However, with the loss of Sole Jaimes’ physical presence, the front three needed to play closer to each other. The flick-on is won and the second ball is secured by Argentina. 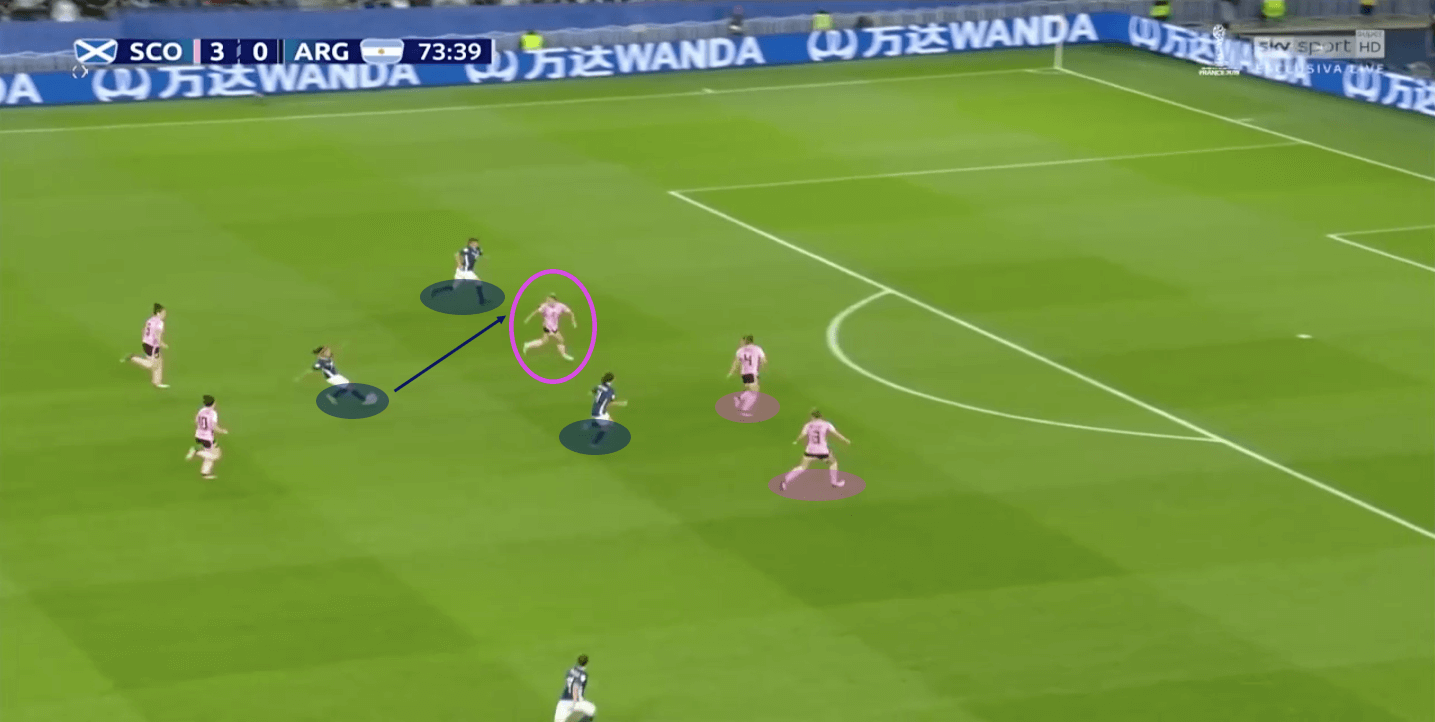 Upon securing the second ball Argentina have a 3v3 against the Scotland defence. The ball carrier for Argentina holds on to the ball until the last possible second before exploiting the poor body shape of the circled Scotland defender. Had her body orientation been reversed and she was facing the runner then she would have been able to cover the ground quicker and potentially block the shot. This was the beginning of Argentina’s comeback.

Movement of Cuthbert and Little

As mentioned in the ‘lineups’ section of this analysis, Cuthbert and Little were given free rein to roam from their positions to find pockets of space to operate in. 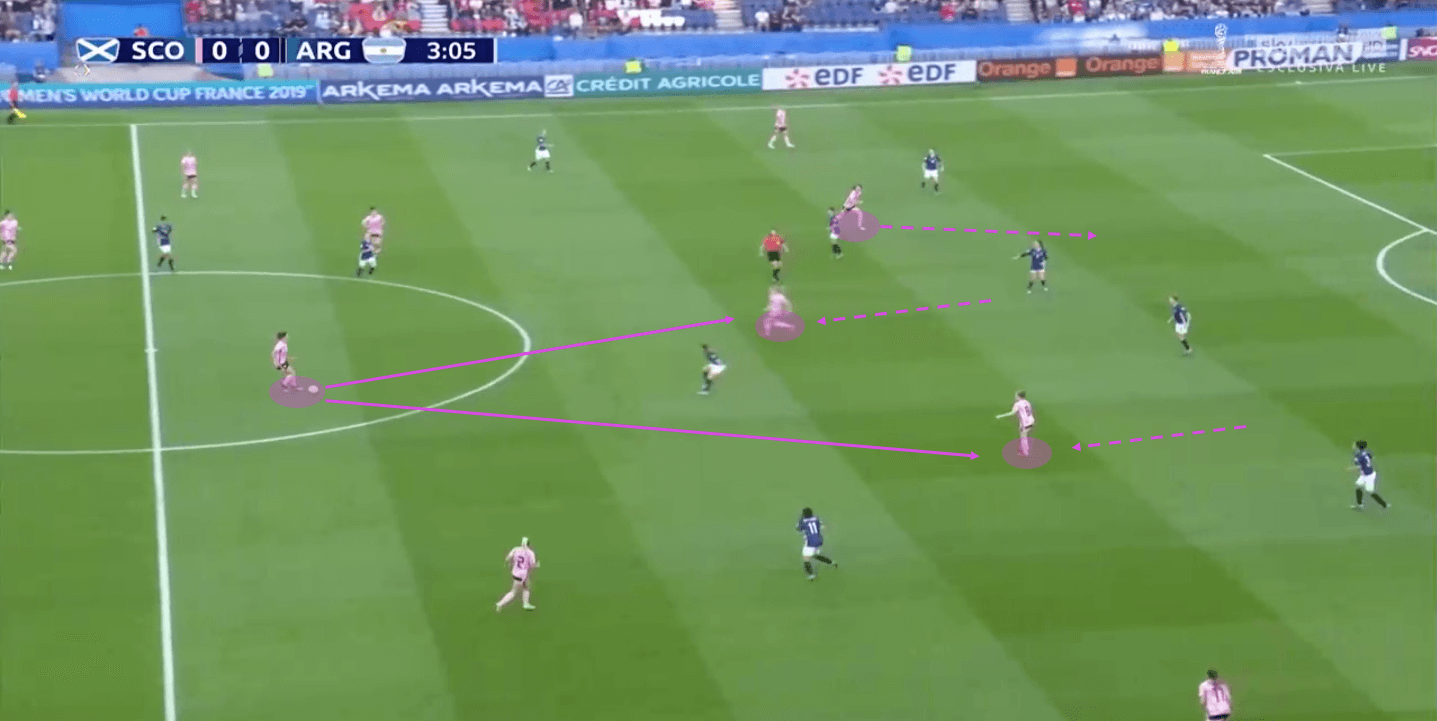 In the image above we can see Crichton with the ball at her feet. Both Cuthbert and Little have dropped off the front line into half-spaces and if found can turn and attack the Argentina defence with support either side. Also highlighted is the run at the top of the image by Weir. She is making a break in behind, into the space left by Cuthbert. This gave the Argentina defence a dilemma. Do they track the run of Weir which is perhaps the more immediate danger? Or do they track Cuthbert into midfield to prevent her from securing the ball in a very dangerous position? 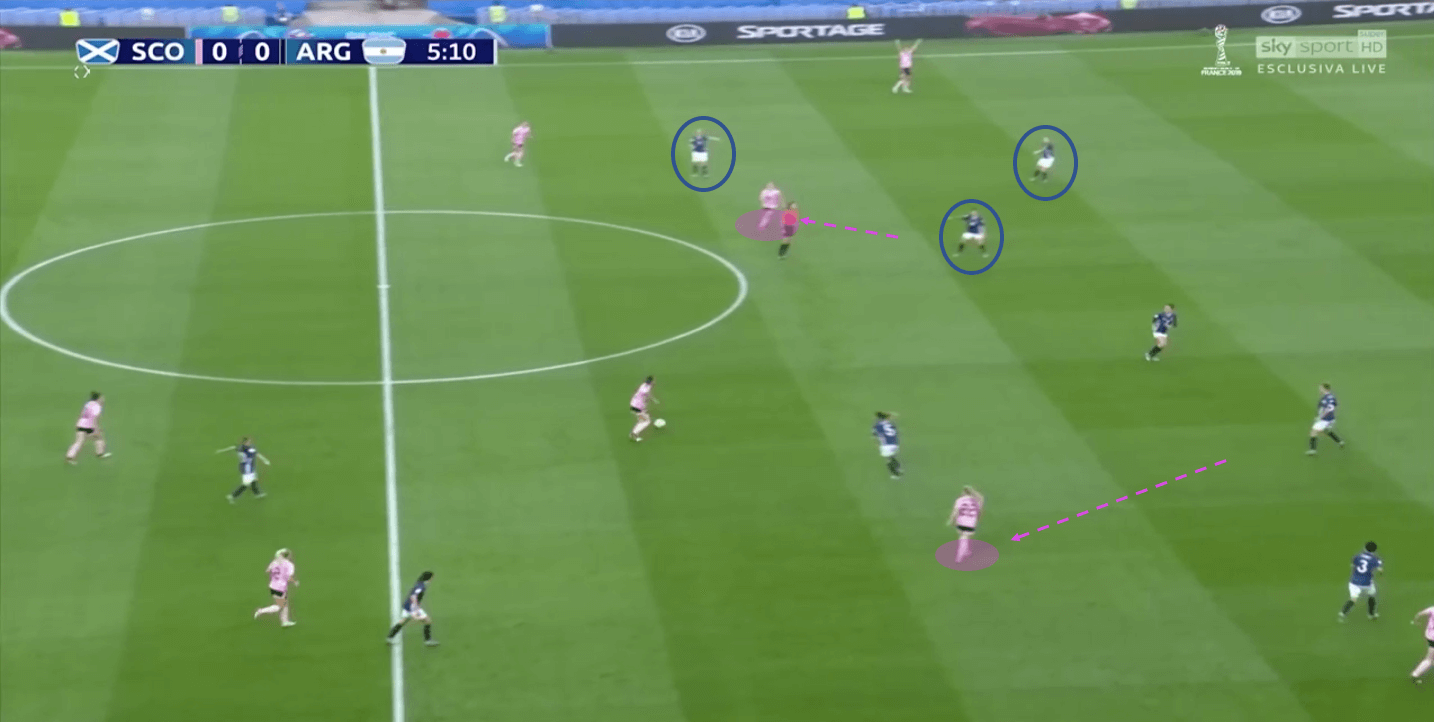 This dilemma is again on shows a couple of minutes later. Again, Cuthbert and Little have dropped off the front line. Weir has the ball and can pick out either of them. The confusion that this movement was causing is clear. All three circled Argentina defenders are pointing at Little but none of them are actually picking her up. Emslie is giving Argentina an added headache as she is in a dangerous position on the left flank. 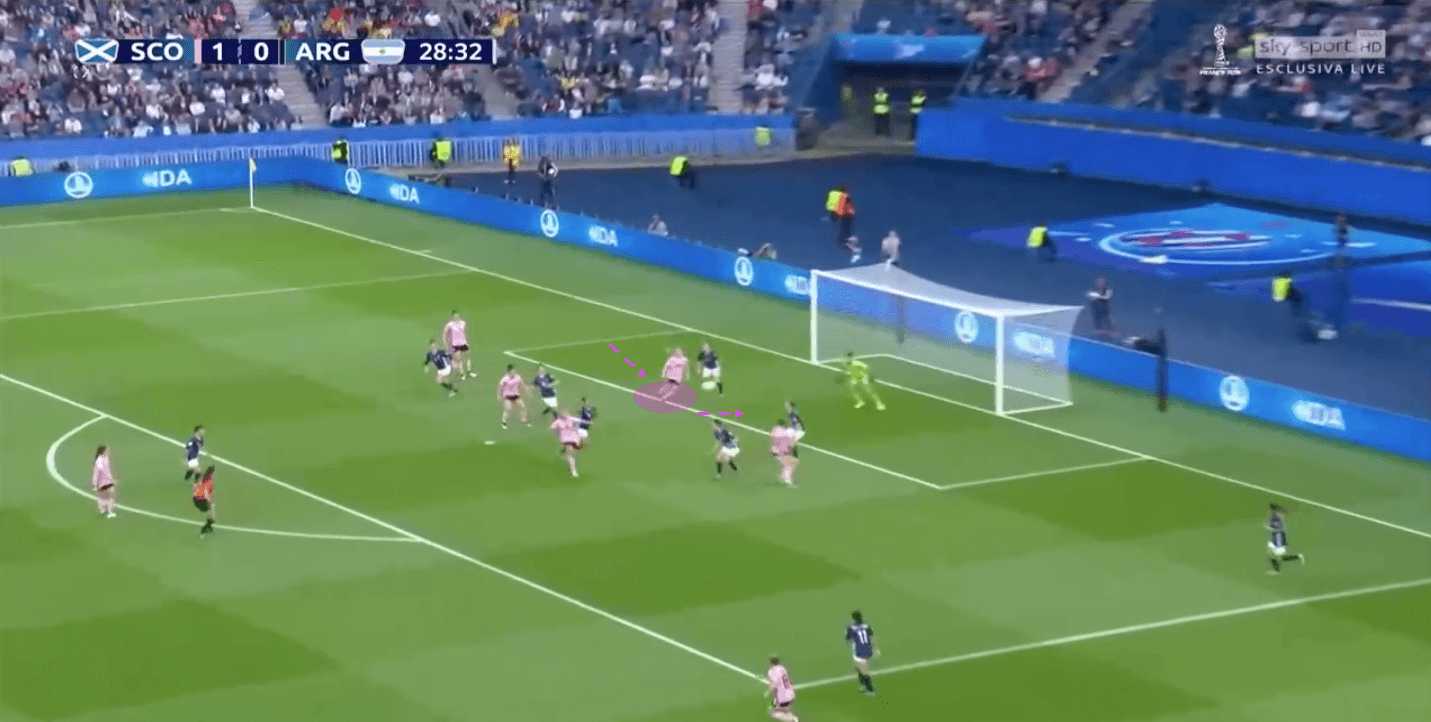 Corner kicks are an incredibly underutilised weapon in football. In knockout tournaments in particular, Corner kicks can be the difference between going home with your tail between your legs or reaching the semi-finals (see England in the 2018 World Cup).

Scotland demonstrated some interesting movements and combinations at their corners in this game. What was particularly threatening was the positioning and movement of Cuthbert. In the image above we can see Cuthbert in the six-yard box. She has moved from behind her marker to be in a good position to benefit from a rebound or knockdown. 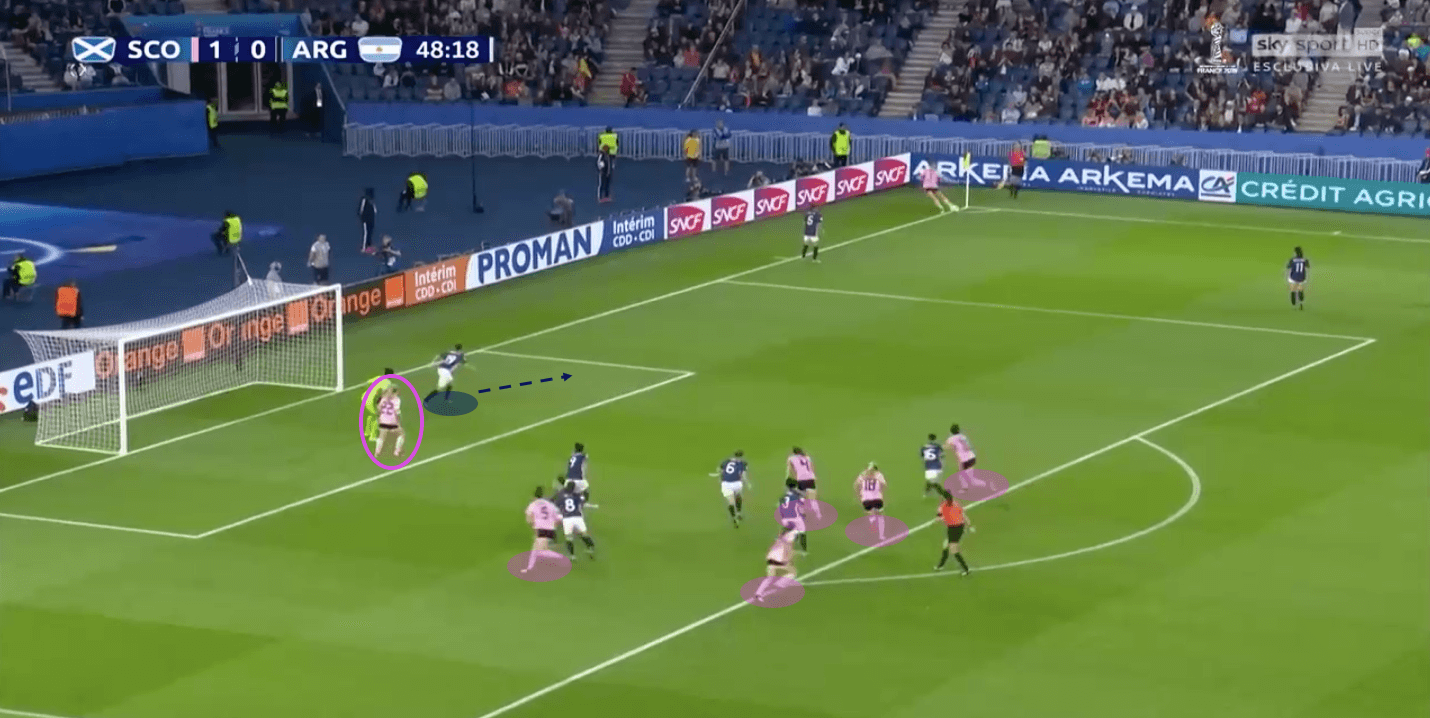 Again in the image above Cuthbert is in the six-yard box. This time she is totally unmarked. The nearest player her to her is, in fact, moving away from her to attack the initial ball in. The rest of the Scotland attackers attack the ball from deep with a number of different movements in order to win the first ball and cause confusion or gain half a yard. 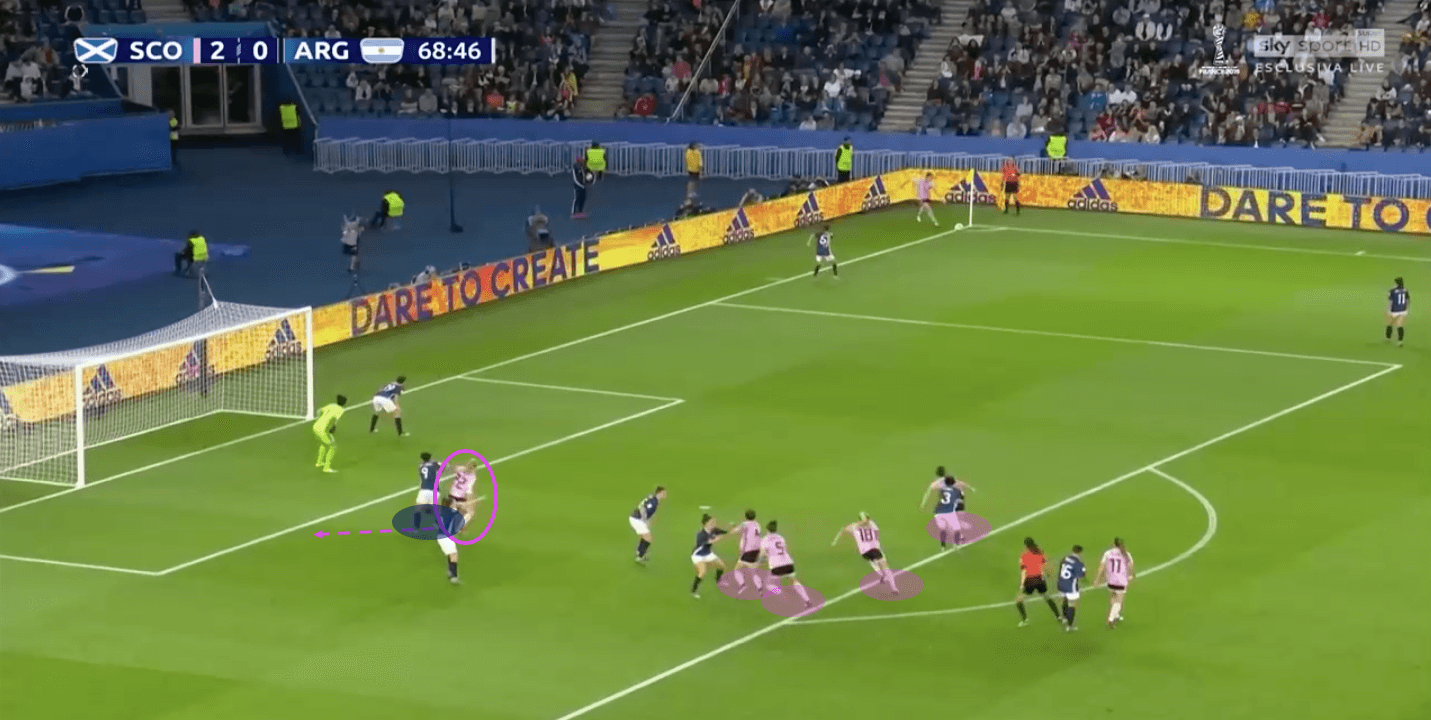 Despite two warnings, Argentina didn’t adapt to pick up Cuthbert who kept finding herself in dangerous positions. This time she is marked by Sole Jaimes. However, when the ball is crossed into the box Sole Jaimes chooses to attack the ball rather than staying with Cuthbert. 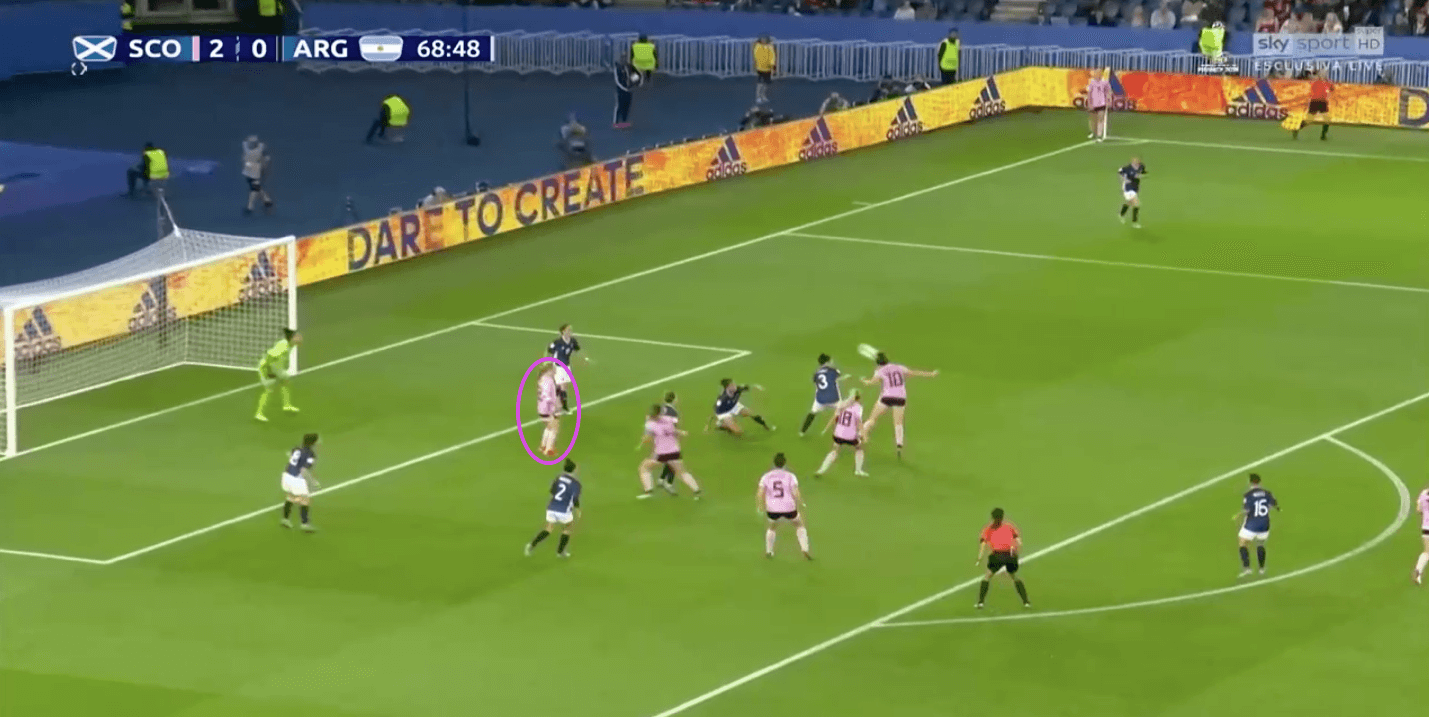 Crichton wins the header and directs it goalwards. Cuthbert is unmarked in the middle of the box. 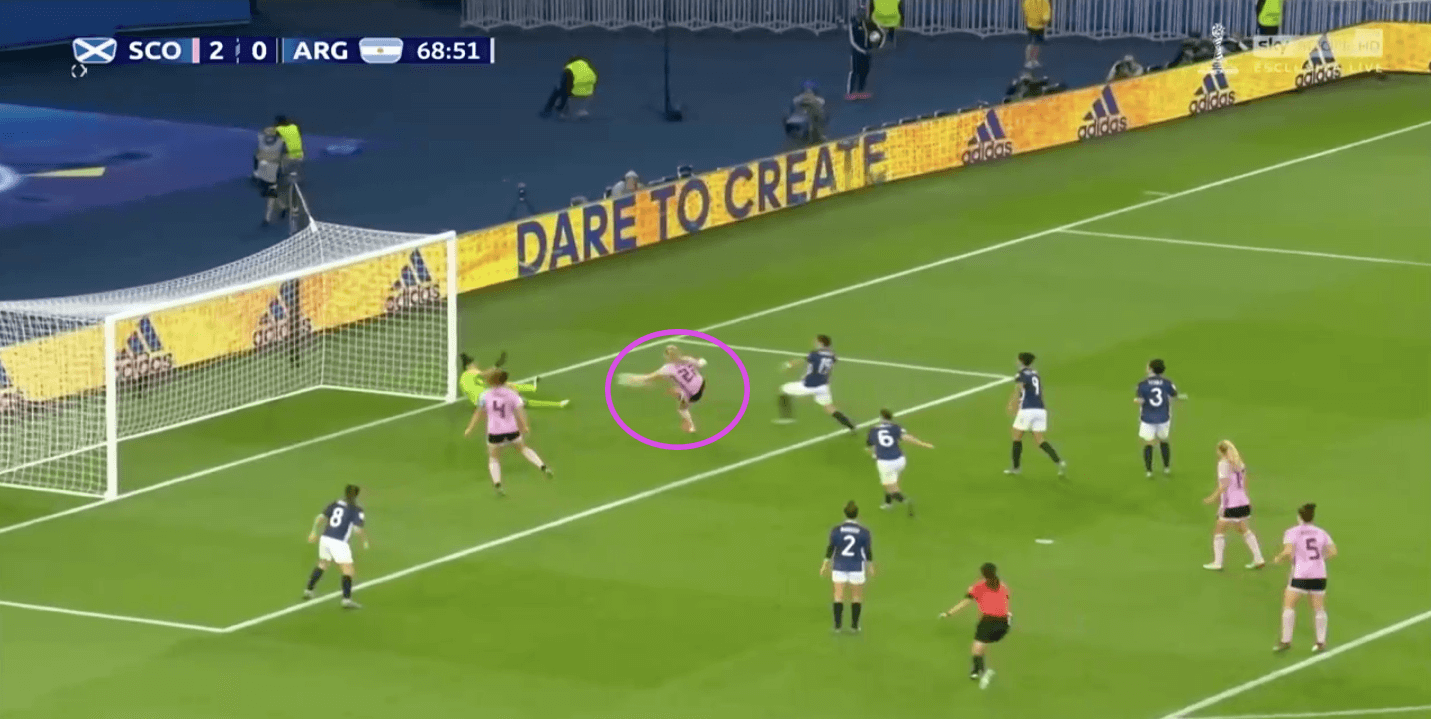 The Argentina keeper pulls off an incredible save but the ball falls to the unmarked Cuthbert who can smash the ball in from within six yards.

Scotland will be desperately disappointed that they let a three-goal lead slip and that their World Cup adventure is over. Up until Argentina’s first goal in the 72nd minute, Scotland were in complete control and looked levels above Argentina. The analysis has shown us that they can consider themselves somewhat unfortunate, however. Argentina’s second goal was a hit and hope which was tipped onto the bar before rebounding onto keeper Alexander’s hand and of course, the final goal is well documented and has been hugely controversial across the footballing world.

In the end, a draw wasn’t good enough for either side as both drop out of the tournament. However, as far as Scotland can be concerned they can have great enthusiasm for their future and they will have learned many lessons from their maiden voyage into the World Cup.