We advance to the FIFA Women’s World Cup knockout phase where England faced with Cameroon. The fixture foreshadowed an England win since Lionesses came to the round of 16 as the winner of their group, whilst Cameroon were only able to reach there as the best third-place finisher in the group stages. This tactical analysis reveals how England recorded this easy 3-0 victory. 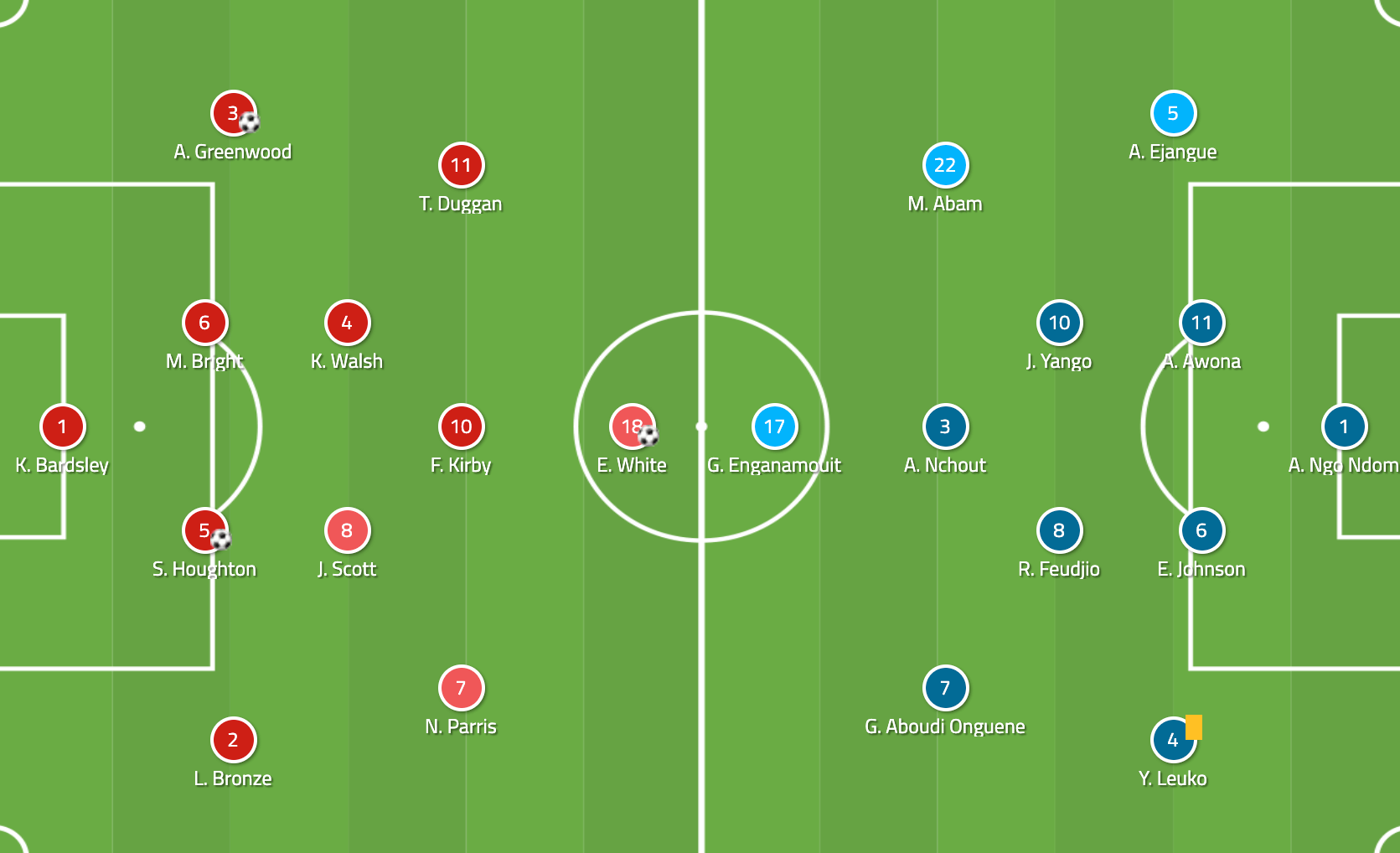 England lined up in a 4-1-4-1 formation, although it tends to morph into a 4-2-3-1 in possession. Moreover, Alex Greenwood returned to the left back position after Demi Stokes replaced her against Japan. Next to her, the usual, Lucy Bronze, Stephanie Houghton, Millie Bright were in the defence. Meanwhile, Kiera Walsh on paper deployed as a lone holding midfielder, but Jill Scott dropped and formed a double pivot, although she had the licence to push forward.

On the other hand, Cameroon looks to choose formation according to the opponent – so far they used formations like 4-3-3 and 5-4-1 – thus for against England, they played in a 4-2-3-1 to match England’s midfield.

Furthermore, there were changes in the team selection too. Aurelle Awona and Augustine Ejangue stayed in the defence like in the last game, against New Zealand. In front of the four of line, Raissa Feudjio and Jeannette Yango paired up. As opposed to the teamsheet, Michaela Abam played in the centre and Ajara Nchout in the right wing. Whilst Gabrielle Onguene on the left and Gaëlle Enganamouit as a lone striker.

England in possession, Cameroon against the ball

Lionesses dominated from the beginning, of course, this resulted in a much higher possession rate for them (67%). Cameroon wanted to form a mid-block against the ball and emphasised on counter-attacks. Therefore it was a crucial part of the game that how England were able to build out from the back.

In possession, England formation fluctuated between 4-2-3-1 and 4-3-3, mostly depends on the phase of the build-up. In the early phases, Scott occupied deeper but then she pushed up the pitch. She often moved outwards to combine with the teammates in the right wing.

For example, in here, Houghton passed to Parris who dropped then she laid it off to the advancing full-back who passes it behind Cameroon’s last line where Jill Scott arrived.

Or in this situation where Parris moved outwards, next to the touchline to offer pass option to Bronze. This dragged the opposition full-back out of position and Scott could fill the vacated space.

Furthermore, there were several situations where England formed a back three during the build-up. It occurred mostly after England won the ball back and recycled through the back line. As the image highlights below, Greenwood dropped deep and situationally formed a back three with Bright and Houghton. Bronze also started to drop when England lost the ball but not that deep and right after they stabilised she pushed up again.

Meanwhile, Cameroon formed a 4-2-3-1 during the pressing phase, where Enganamouit looked to block the passing route between the opponent’s centre-backs and Walsh thus she did not press out aggressively. The midfielders mostly used man-marking on England’s midfielders while the wingers tasked with pressing the full-backs when they receive passes. In goal kick situations, Cameroon transformed into 4-2-4 shape as Enganamouit dropped next to Abam to closing on Scott.

Exploiting through the half-spaces

In general, half-spaces are important zones, especially in the recent years, but in this game, it had a major role due to the fact that England’s possession play target that zone or at least often found open space there.

In the 4-2-3-1 pressing setup, Cameroon’s wingers occupied a bit wider to gain access to the full-backs. However, this caused a major structural issue for them as the half-spaces became unoccupied and open. England – in most cases – had two options to exploit this flaw.

Let’s see some examples of that. In the first instance, Scott moved out of Enganamouit’s cover shadow to receive the ball from the centre-back. 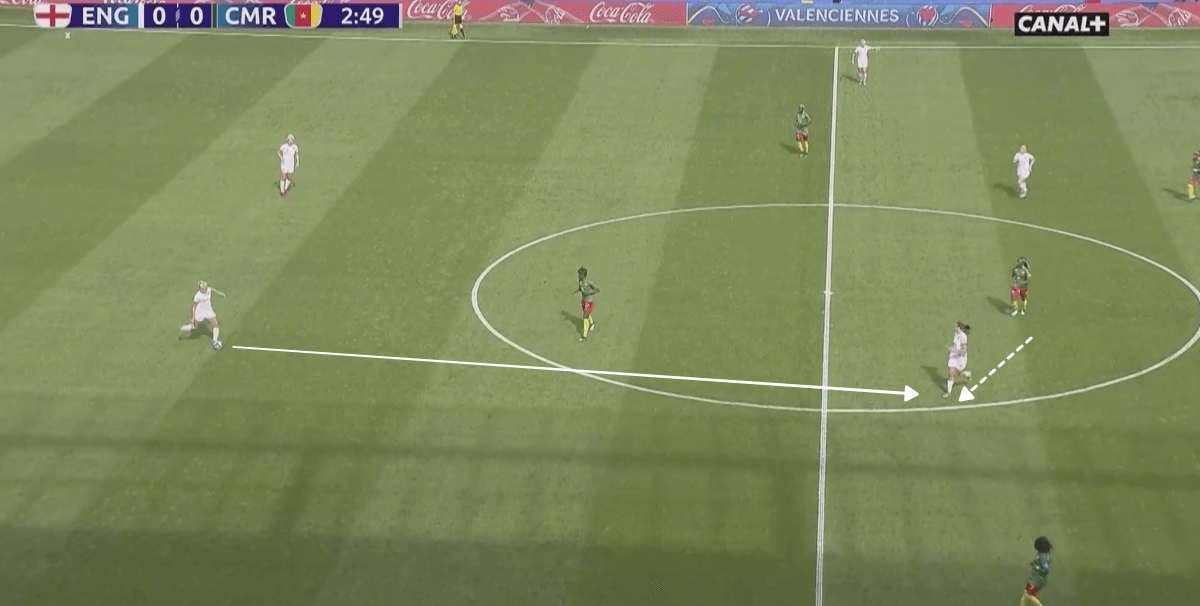 In the below example, Duggan drops into the vacated space. Walsh dropped a bit to drag the opponent out of position and open up spaces. Unfortunately, Bright chose to pass wide to the full-back.

In the last case, the centre-back dribbles forward on the ball utilising the space in front of her. Then exploiting the space between the opposition winger and central midfielder.

The clash truly revealed the quality differences between these two teams, especially in the second half, where England scored the third goal after Cameroon failed to score twice. The first was due to VAR decision and the second attempt was saved by Karen Bardsley. Cameroon did not react well thus it became a dramatic show that generated lots of material to the media. If you asked me, I would not be that judgemental towards Cameroon since truth to be told, it was hard to accept. All started with the chance that it was an opportunity to advance to quarterfinals. Then England scored the second goal the worst possible time from Cameroon’s perspective as they could not respond to that due to the halftime.

All in all, it was a difficult circumstance and where one team was able to highly overpowered the other and destroy them. Cameroon had lots of mistakes throughout the match such as imprecise passes, wrong ball control etc. Next step, Cameroon has to collect the good values and experiences from this FIFA Women’s World Cup, whilst England will face with Norway in the quarterfinals.