As the FIFA Women’s World Cup entered the round of 16 stage, France hosted Brazil with a place in the quarter-finals at stake. Brazil snuck through the group stages having won two and lost one, while France were looking to maintain their perfect record at the competition so far, with three wins from three heading into the knockout phases. France did, of course, maintain their perfect record, with a hard-fought win over a heartbroken Brazil side. In this tactical analysis, I’ll look at how both sides more or less cancelled each other out, and how this game contributed further to the growing trend in this year’s FIFA Women’s World Cup. 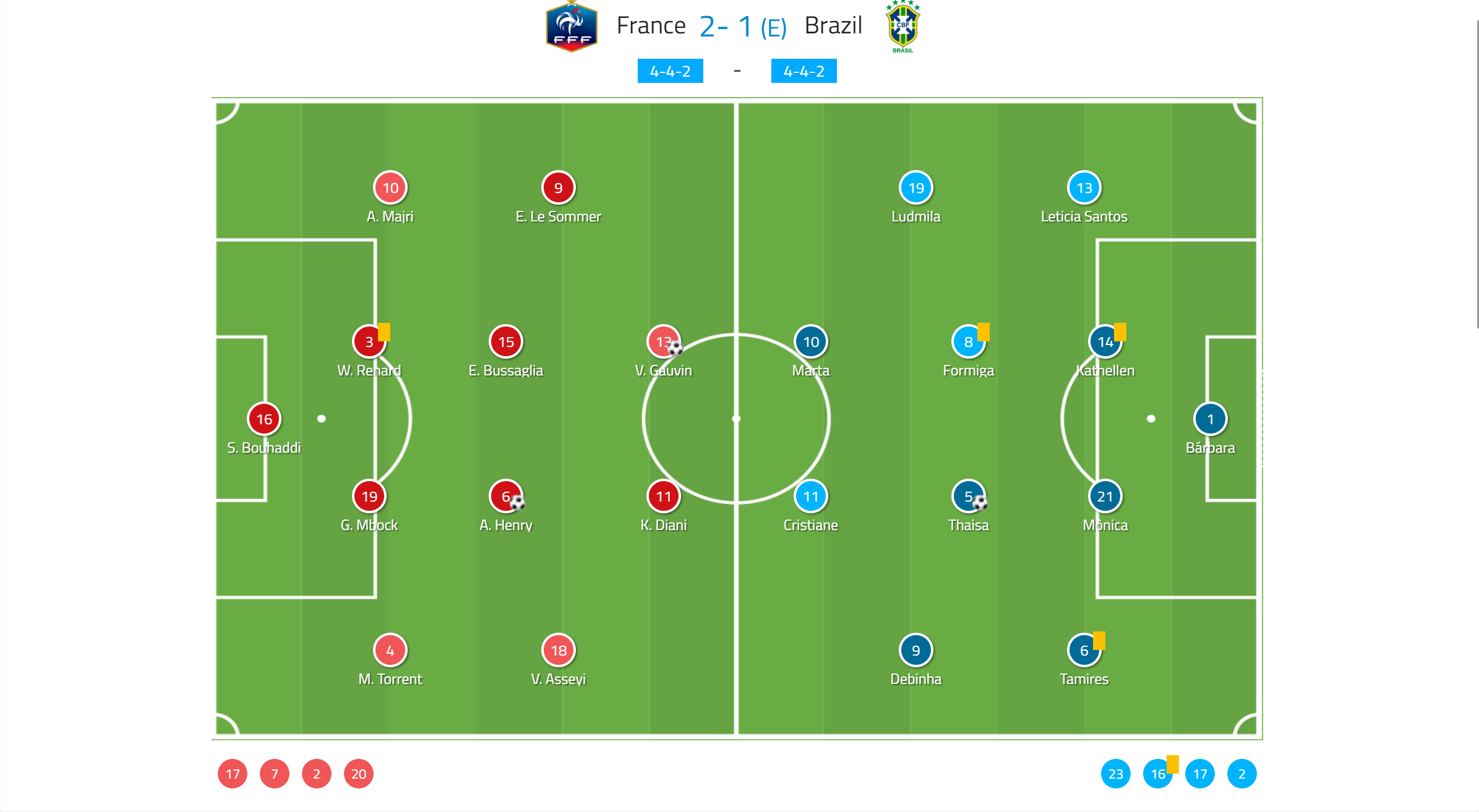 Both sides matched up against each other with a 4-4-2 formation, with an emphasis on wing play being seen again in this game. This mirroring of formations meant that shape of the two teams was very similar, and so the game became less tactical and more technical, in that there were lots of 1v1 duels, and the team which won the most vital ones came out on top.

The game was not benefitted by the number of fouls, stoppages, and injuries as I will move onto later, as neither side was really able to find their rhythm. This suited Brazil, who were happy to allow France to have the front foot, looking to counter on the break with their usual strategy of passes down the wings.

With both sides in a 4-4-2, the game became a battle of whose full backs were the better defenders, or whose wingers were the most capable attackers. In this department, France came out on top.

We can see below, Brazil hold a perfectly good defensive structure (apart from possibly some covering issues), with France’s player with their back to goal. Their good structure was penetrated on multiple occasions by the superior technical ability of France’s wingers. For example below, Asseyi beats the full back and is able to drive into space behind despite having her back to goal. This results in a goal for France, as they were not able to recover due to the pace of Asseyi.

Again below, there is a reliance on the full back to win the 1v1, with little cover in behind them. Again, Tamires loses the duel and so Brazil are the subject of another cross, which leads to a goal for France which was later disallowed. These images show how France were able to cause Brazil problems from seemingly impossible situations.

Brazil’s covering of each other could have been better, but this problem could have been solved by winning the initial duels, and in wide areas, Brazil didn’t. Upon seeing Tamires’ clear struggle, Formiga should have been reminded to cover her more to prevent crosses being delivered, but this didn’t appear to be the case.

Pressing with a 4-4-2 often leads to a common problem, which I have illustrated below. This press requires the full-backs to join in, otherwise, a dropping left winger can be found in space easily. This can feel unnatural for a full back at first, as they are high up the pitch and leave space in behind, but it usually leads to a turnover in possession from the opposition. 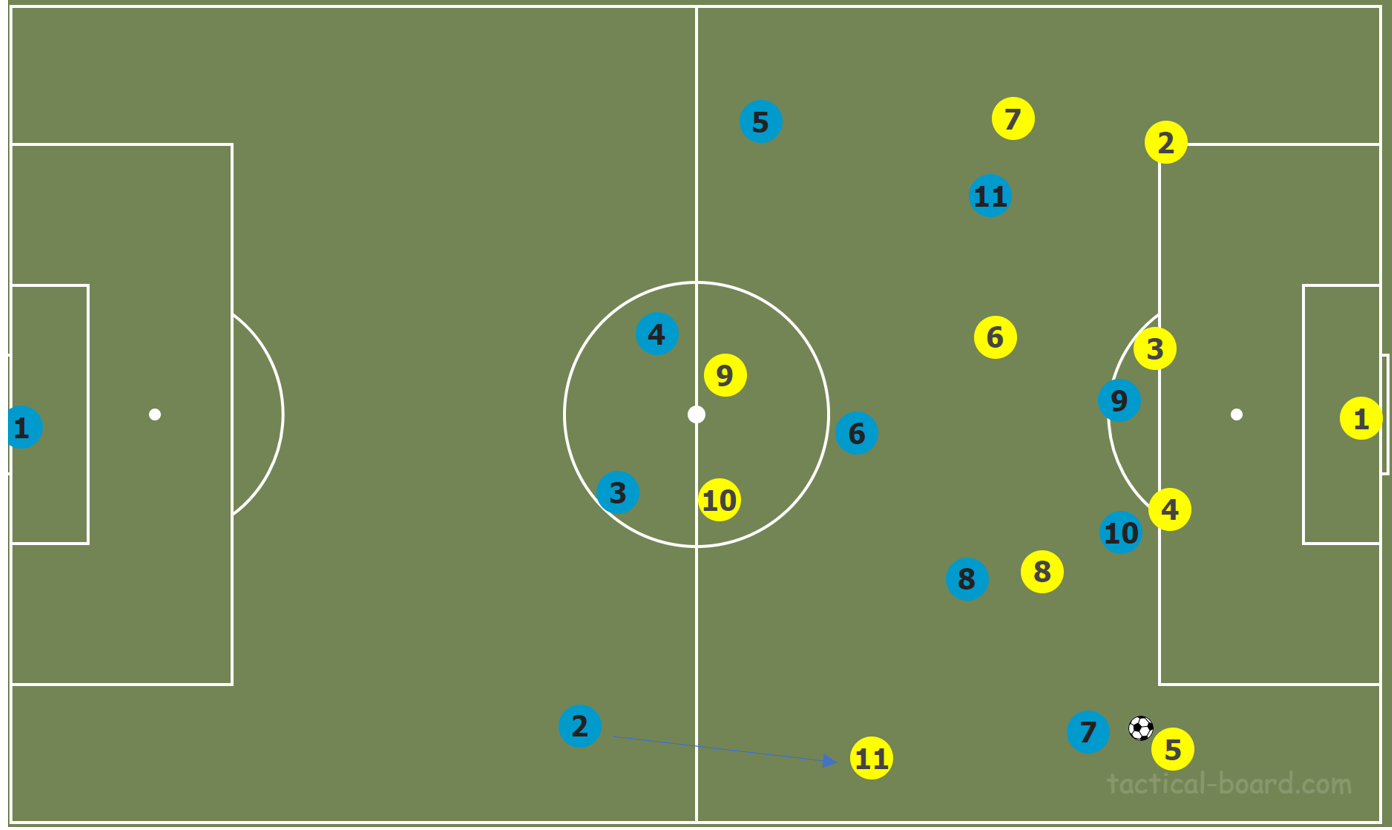 If the full back doesn’t join the press, there is clearly a large space for the winger to work in. We can see in the example below the full back is nowhere near, in this case, Marta on the wing, and so Brazil find it simple to overcome the press.

Marta often drops into this space instead of the winger during the build-up phase as she is better on the ball and slower than the winger. Therefore, when she receives the ball in this area, the winger is in her striker position and makes a run in behind which Marta tries to, and often does find.

Again in the example below, the full back stays within the defensive line and does not press the winger leaving more space to receive the ball again. The central midfielder can also help to prevent Brazil’s build up by pressing the corresponding opposition midfielder tightly, in order to prevent a pass being played to the winger.

The poor positioning of the full-backs in this game was an area often exploited by both teams. This was something which I also picked up in Australia’s game against Brazil, and so the need for quality fullbacks in the Women’s game is definitely there. I’ve detailed the issues with Brazil’s full backs, but France were also caught out a few times down the wings, but whether this is due to the sheer quantity of attacks down the wings at this World Cup or whether it is a quality issue is an interesting question.

We see below, France’s full back is drawn into the press the ball. This would be good play if done more quickly, but because it isn’t done quickly enough, the full back instead just leaves more space for the winger to get in behind, as I detailed above.

So what impact did this have on the game?

This meant, particularly for Brazil, that they couldn’t deal with the opposition in the wide areas, and so started to commit more and more fouls. Brazil committed a huge 24 fouls compared to France’s 10, and the majority of these were in wide areas, which ultimately cost them as it led to France’s extra time goal.

Here is one such example below, where Brazil’s left full back Tamires has committed a foul and France get the opportunity to use their height from a set piece.

We can see again below, a free kick is given away on Brazil’s left side of the pitch, which is where France’s final goal came from. Again, it was clear Tamires needed more help but Brazil were unable to provide it, and France eventually broke through deservedly after coming close several times, with the delivery just not quite there.

In truth, the game’s tactics were hindered by the constant stoppages in the game, but with both teams employing a reasonably similar strategy, the side with the most quality prevailed. France have therefore booked themselves a place in the quarter-finals and will be dreaming of winning the tournament as host.

However, they will have to perform better than they did in this game to stand a chance of doing so, as teams left in the tournament are more than capable of exploiting the weaknesses they have seen in this game. Offensively, they will have to be more creative, as a reliance on winning duels is a dangerous strategy, because rather obviously, when you start losing them duels, you lose all attacking threat.