England take on Cameroon Sunday afternoon on the second day of round of 16 matches in this Women’s World Cup. The Lionesses, who are ranked third in the world, will be heavy favourites to go through.

Cameroon scraped through to the knockout stages thanks to spectacular drama in their final group game against New Zealand. A horror own goal from Aurelle Awona had initially cancelled out Ajara Nchout’s opener. Nchout, however, grabbed a winner with the last kick of the game to send the Indomitable Lionesses through as one of the four best third-place teams.

They will face another tough match against England after a group with Canada and the Netherlands. England have, though, been a little unconvincing at times.

While they achieved maximum points in the group stage, they have not always impressed. A poor second-half display against Scotland saw the Scots come close to snatching a draw, and they struggled to break down a spirited Argentina.

Their positive 2-0 win against Japan will give confidence, although the Japanese had their share of chances throughout the game. The Lionesses look likely to be victors in this match, but they will need a drastic improvement should they hope to win the tournament itself.

England have generally set up in a 4-3-3, which sometimes leans towards a 4-2-3-1. This has been due to the use of Chelsea’s Fran Kirby in the midfield, and Georgia Stanway against Japan. Kirby is more of an attacking No10 style of player, so sometimes the Lionesses are orientated as such around her natural role.

Keira Walsh pivots in midfield with Jill Scott providing tenacity, thrust and quality on the ball. England’s right side is also particularly dangerous, with the talents of Lucy Bronze and Nikita Parris being the Lionesses’ most threatening attacking outlet.

There has been a habit of rotation from Phil Neville throughout his tenure, although he has started to show his preferred line up during this tournament. The left hand side will, though, be up for grabs after Demi Stokes and Toni Duggan returned against Japan. 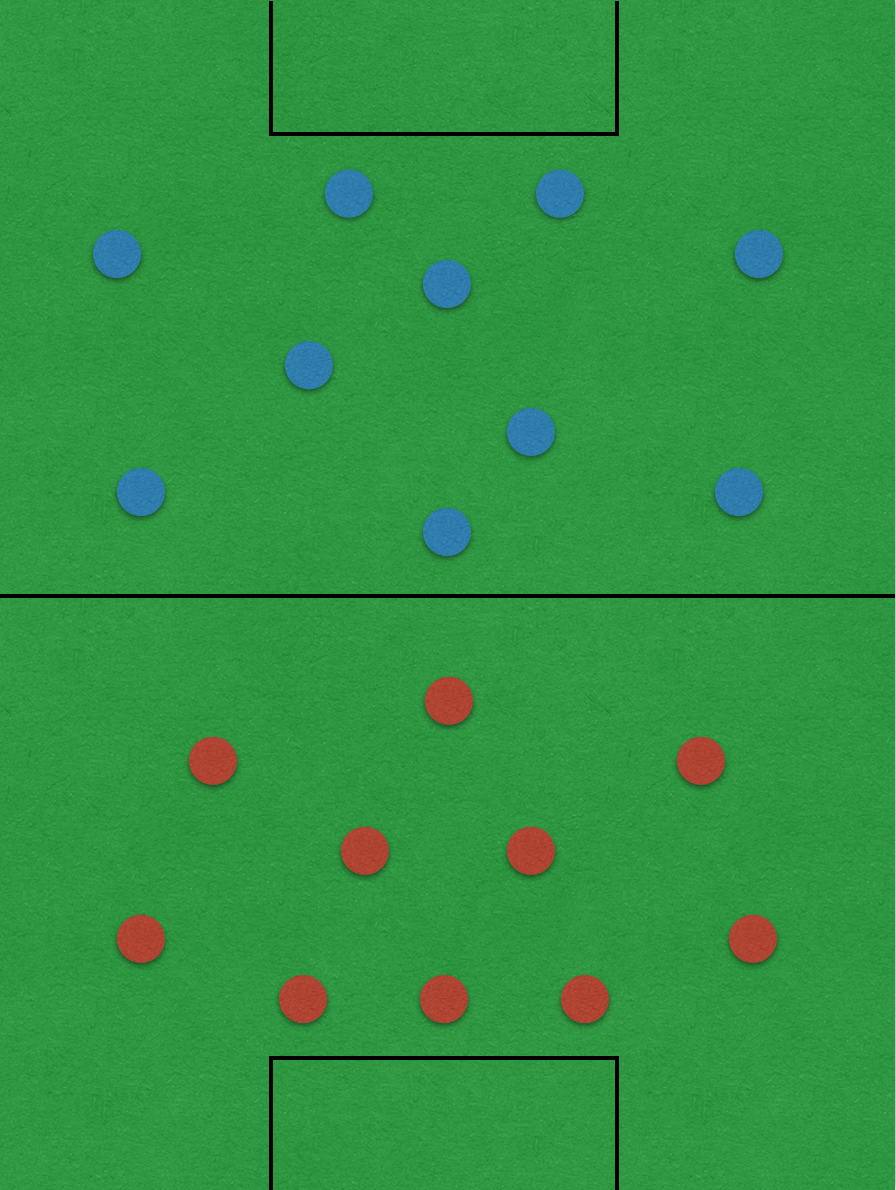 The Indomitable Lionesses played in a more defensive way during their opening two matches against Canada and the Netherlands. It is likely that they will use a similar style against England.

Against New Zealand, Cameroon were lined up in more of a 4-2-3-1 to push forward in a match they had to win. It is not unlikely their rigid 5-4-1 will return against England. If this is the case, Christine Manie will probably make her way back into the team in central defence alongside Estelle Johnson and Awona. Both were excellent against New Zealand, despite Awona’s freakish own goal.

Nchout will surely keep her place in the side after superb goals last time out. She missed out against the Netherlands, and could start on the wing or in midfield. The other wing will be occupied by Gabrielle Onguéné, who was a constant menace against New Zealand.

A key part of any 4-3-3 is, of course, the deep-lying midfield pivot – Kiera Walsh for England. Walsh will often drop deep while the full backs push on, as can be seen below. This is a typical feature of build up in a 4-3-3, with the other two midfielders (Scott and Kirby) higher up the pitch. 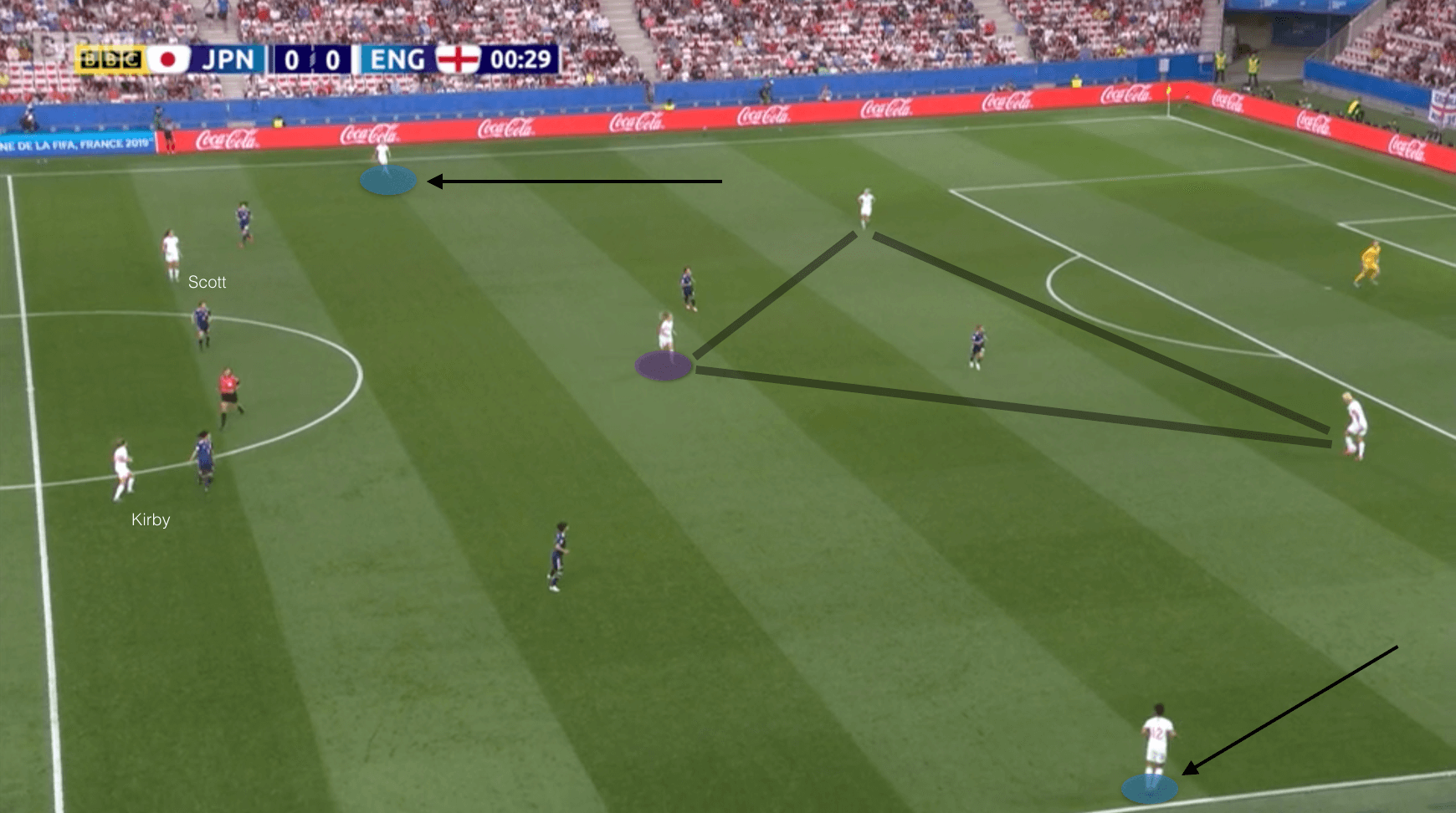 The problems arise, though, when Walsh is adequately covered by the opposition. As highlighted in the next image, Walsh is being shadowed by an opponent. In their match against England, the Japanese tended to sit off and block up build up options. This was generally quite a successful tactic. 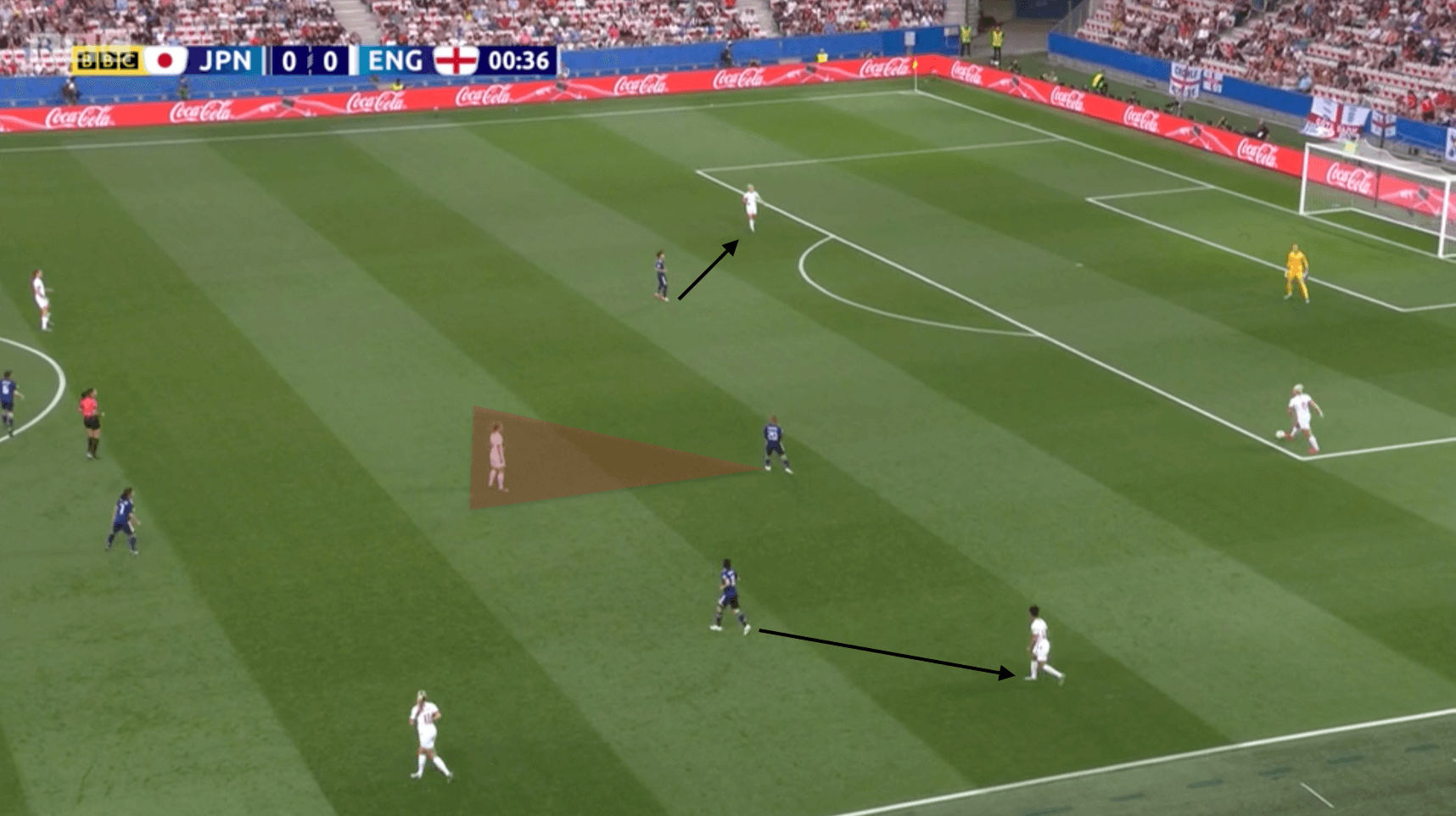 This meant that the Lionesses often had to play long and wide in order to get the ball up the pitch. This is exemplified in the image below, in which Millie Bright has played a long crossfield ball to Bronze. As we will see later in this analysis, this tactic could prove important against Cameroon. 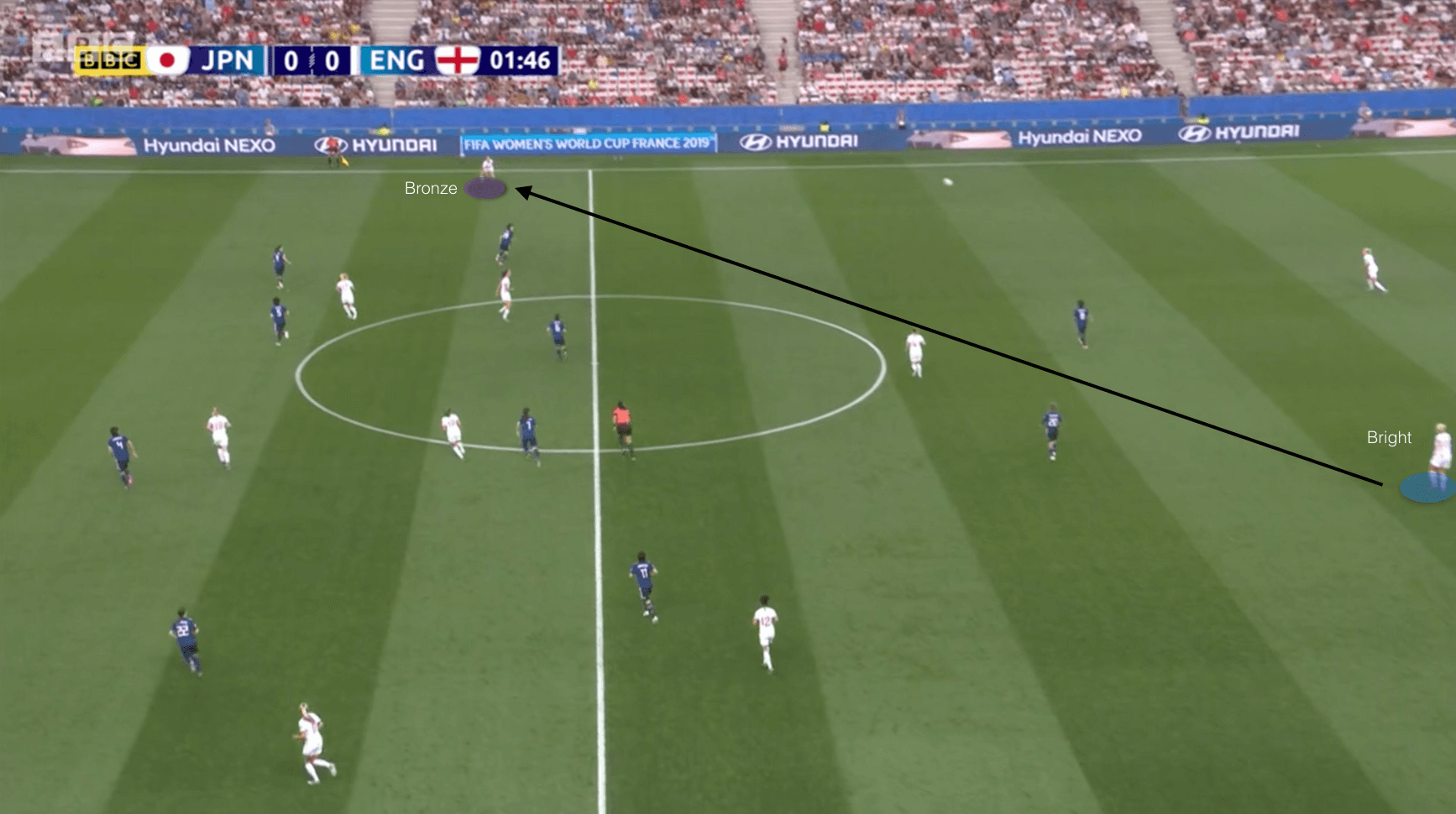 Cameroon have been through a few different structures this tournament. Against Canada, it was a rigid 5-4-1 structure and against the Netherlands, it was a 4-3-3 that was slightly less defensive. In the image below, we can see the set out of their 4-3-3 structure when defending higher up the pitch. 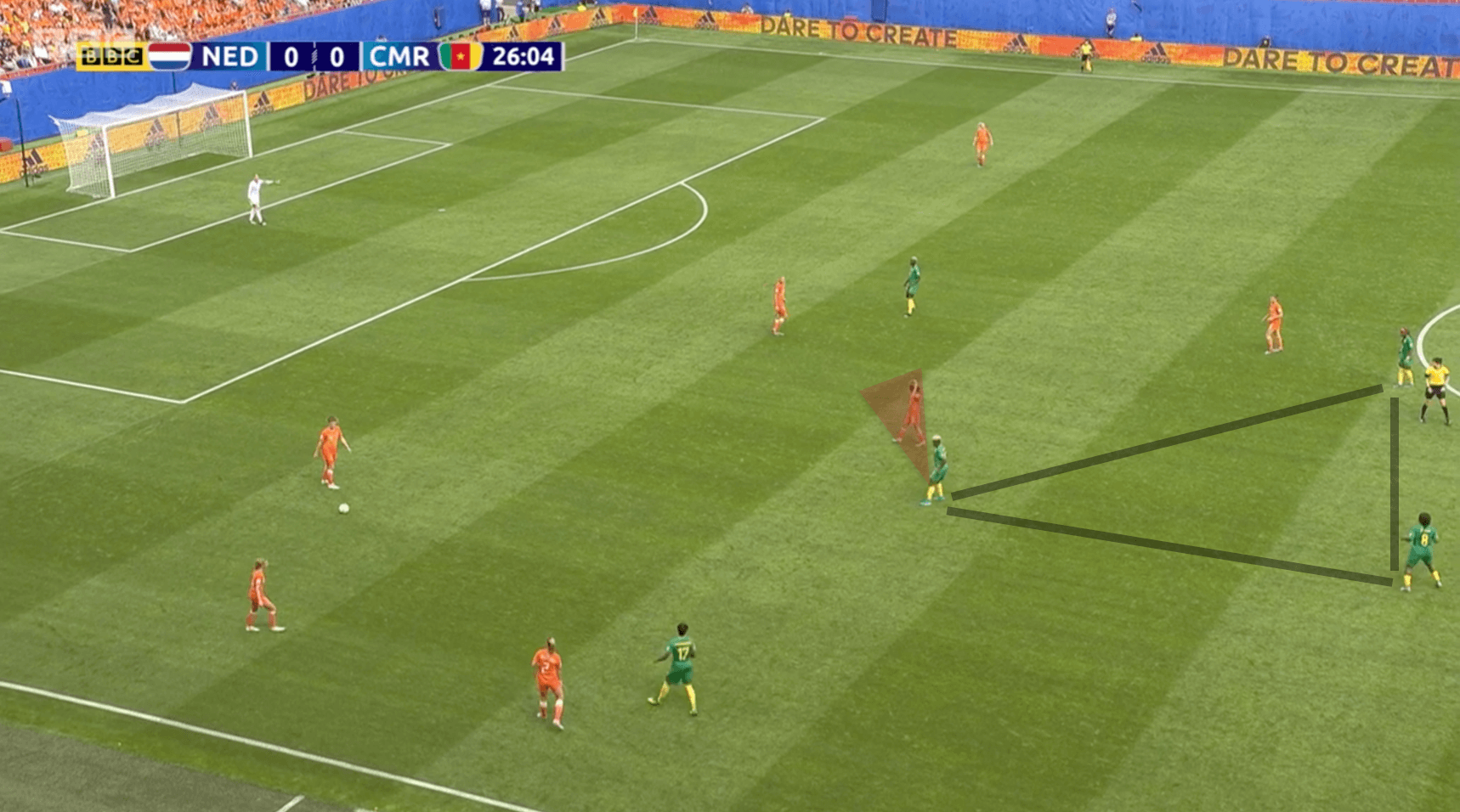 Genevieve Ngo Mbeleck in midfield has pushed forward, almost orientating in a 4-2-3-1 shape, and pressed the deepest Dutch midfielder to disrupt the build. This could have a similar nullifying effect on England should they choose to go with this tactic.

Against Canada, the Indomitable Lionesses opted for their more defensive 5-4-1. In this, the wingers pushed very high with and without the ball. The result was almost a narrow 5-2-3 formation, which congested the centre of the pitch but left room out wide behind the wingers. 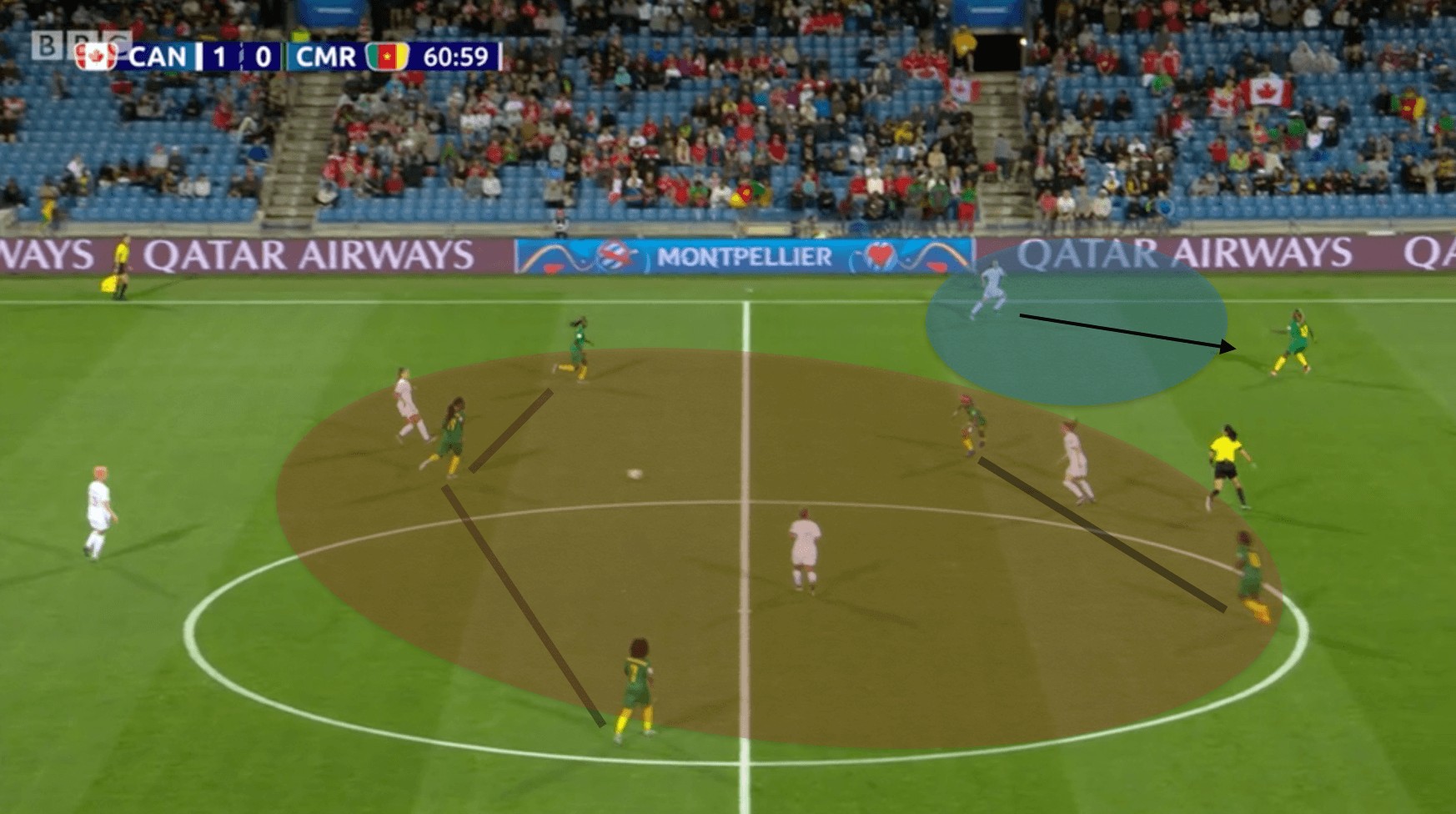 Playing this way did successfully stifle much of Canada’s build-up play, but left Cameroon very stunted in attack with little opportunity to build themselves. The formation could also leave themselves open to switches in play to the full backs which, as we have seen, England have the ability to do.

As their game against New Zealand became more stretched, Onguéné began to find more joy in attack for Cameroon. Her pace and trickery, while not yet yielding any goals, has proved a menacing weapon for the Indomitable Lionesses. Should they hold out and England commit players forward, then more space will open up for Onguéné to exploit. 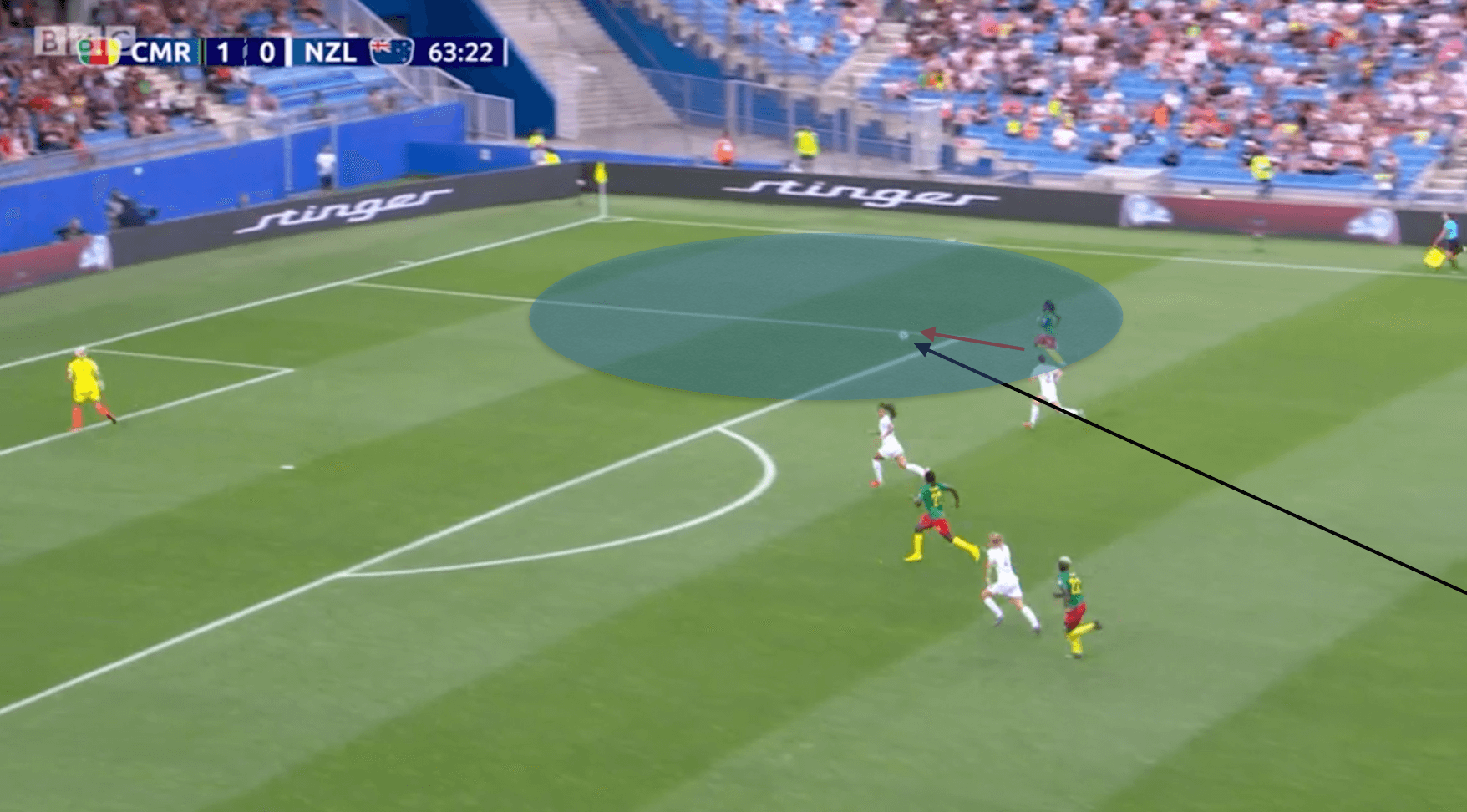 England’s Ellen White has been predatory up front, and will likely be their main goal threat. All three of her goals this tournament have seen her slip in behind a centre back to finish. This can be seen against Japan in the image below. 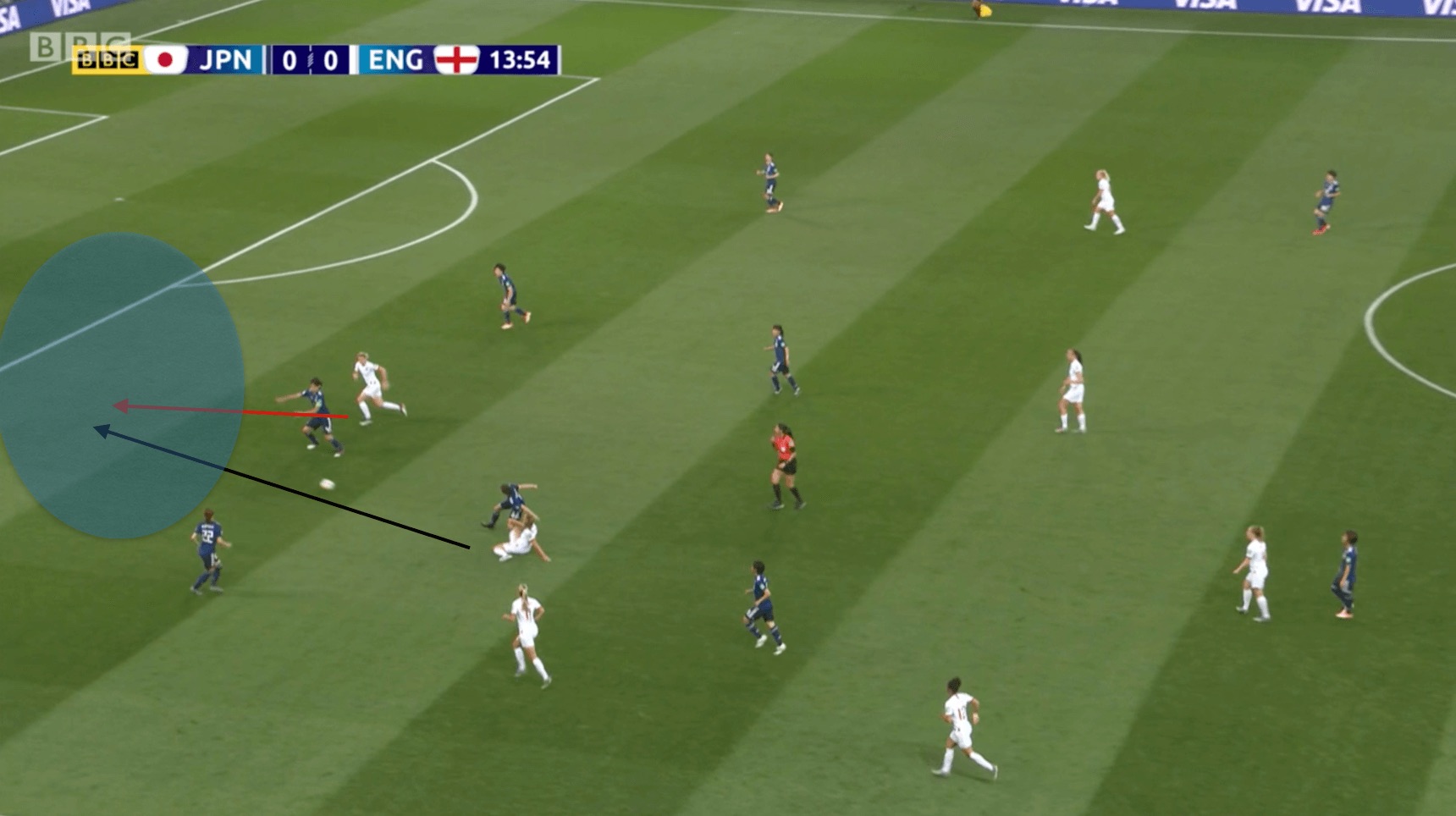 If the Lionesses can get a spare player in midfield to lure out a defender, then they will be able to utilise White’s excellent timing and movement. She has proven that she only needs the smallest of gaps of which to break through.

Cameroon face a choice between a more conservative 5-4-1, or a slightly more aggressive 4-3-3/4-2-3-1. The latter will probably be their best option. It allows for a player to halt England’s build-up by marking Walsh, and gives them greater numbers going forward. It also helps to negate being as exposed out wide behind the wingers, something which England have the capability to exploit.

The Lionesses, will have their work cut out to break down this stubborn Cameroon side. They must also be wary of the threats posed by players like Nchout and Onguéné. There will likely be space out wide which can be exploited, and this could help create overloads in midfield, especially with the attacking intentions of players like Bronze at right back. This could well lead to drawing out centre backs, leaving space for White to get in behind.

It will be a fascinating match, with Cameroon full of hope after their incredible and dramatic passage through the group stage. England will still, however, be favourites for the match.