It was the last round of group game fixtures in the FIFA Women’s World Cup 2019. In Group E, both Cameroon and New Zealand lost their first two games. The clashes between these two teams will decide who will progress.

New Zealand sitting in fourth place behind Cameroon, needed a win. In this tactical analysis, we will show you how Cameroon won a place in the round of last-16.

Instead of a 4-4-2 formation used in the first two matches. Tom Sermanni instructed his team to play in a 5-3-2 formation against Cameroon. Anna Green replaced the injured C.J. Bott. Katie Bowen joined the defence with Katie Duncan starting at defensive midfield. The pair of strikers were still Rosie White and Sarah Gregorius.

Cameroon started some of their best players in this match as well. According to the official site of FIFA, it was a 5-4-1 formation. Their number seven, Gabriel Onguene, was very sharp in this game. 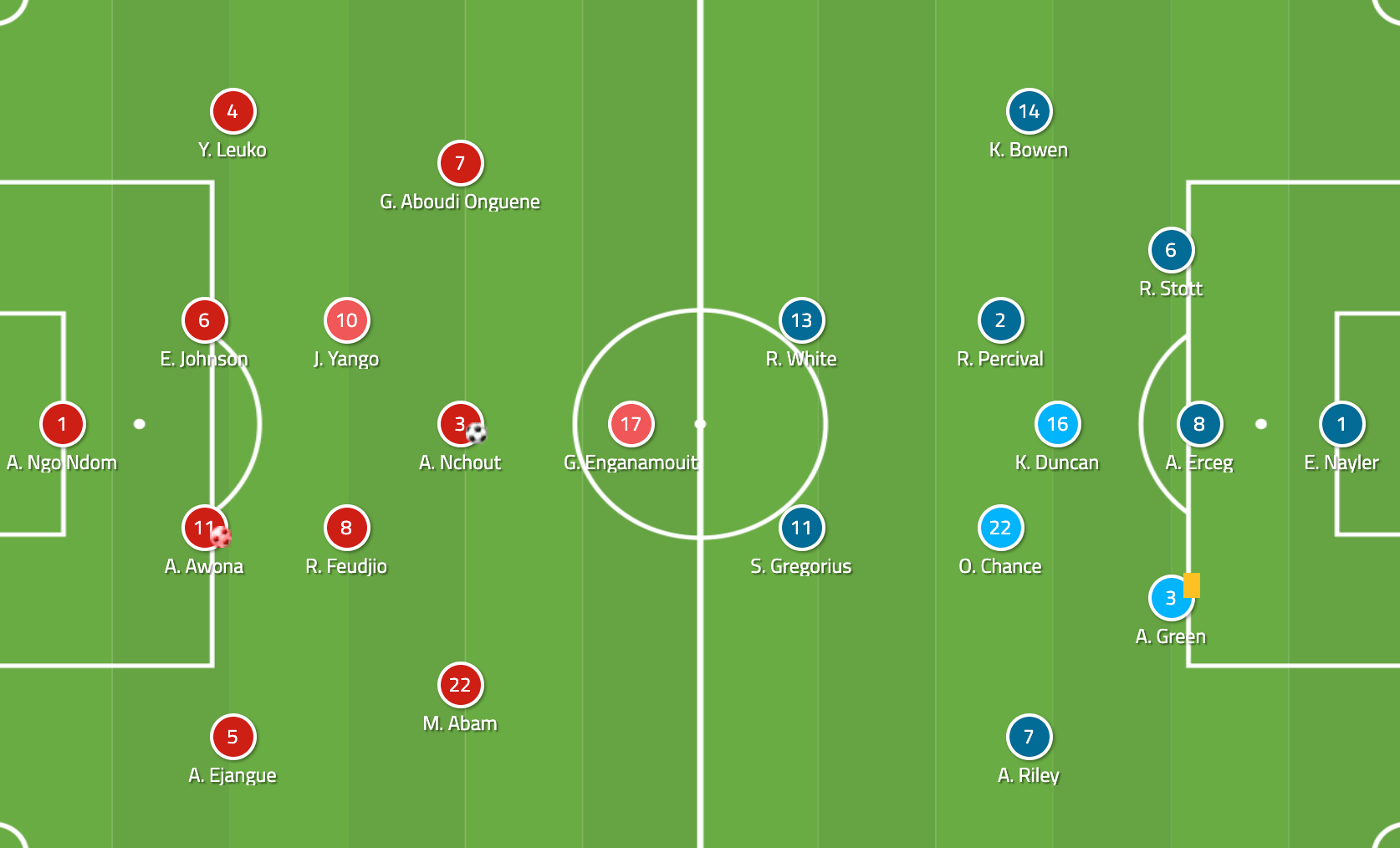 Cameroon exploited the spaces behind defenders

Since Cameroon attempted to take all three points, they were aggressive in their attack. Their pattern to create chances did not involve build-up. Instead, they tried to exploit the spaces behind the New Zealand backline. If their passes could go through the defenders, they could create one v one chances against the goalkeeper. Furthermore, this type of quick play could break the opposition defensive shape. This approach is useful, especially in transitions. Therefore, Cameroon created more shooting chances.

The first two images are an example of using this approach against the high defensive line. The Cameroon players just won the ball back in midfield, trying to hit the opposition in transition. In this moment, the ball carrier drew the attention of the New Zealand midfielders.

The player decided to play a through ball to release Gabriel Onguene. The #7 ran behind Abby Erceg and Rebekah Stott who were unable to chase her down due to her speed. As a result, Onguene faced the goalkeeper and attempted a shot. 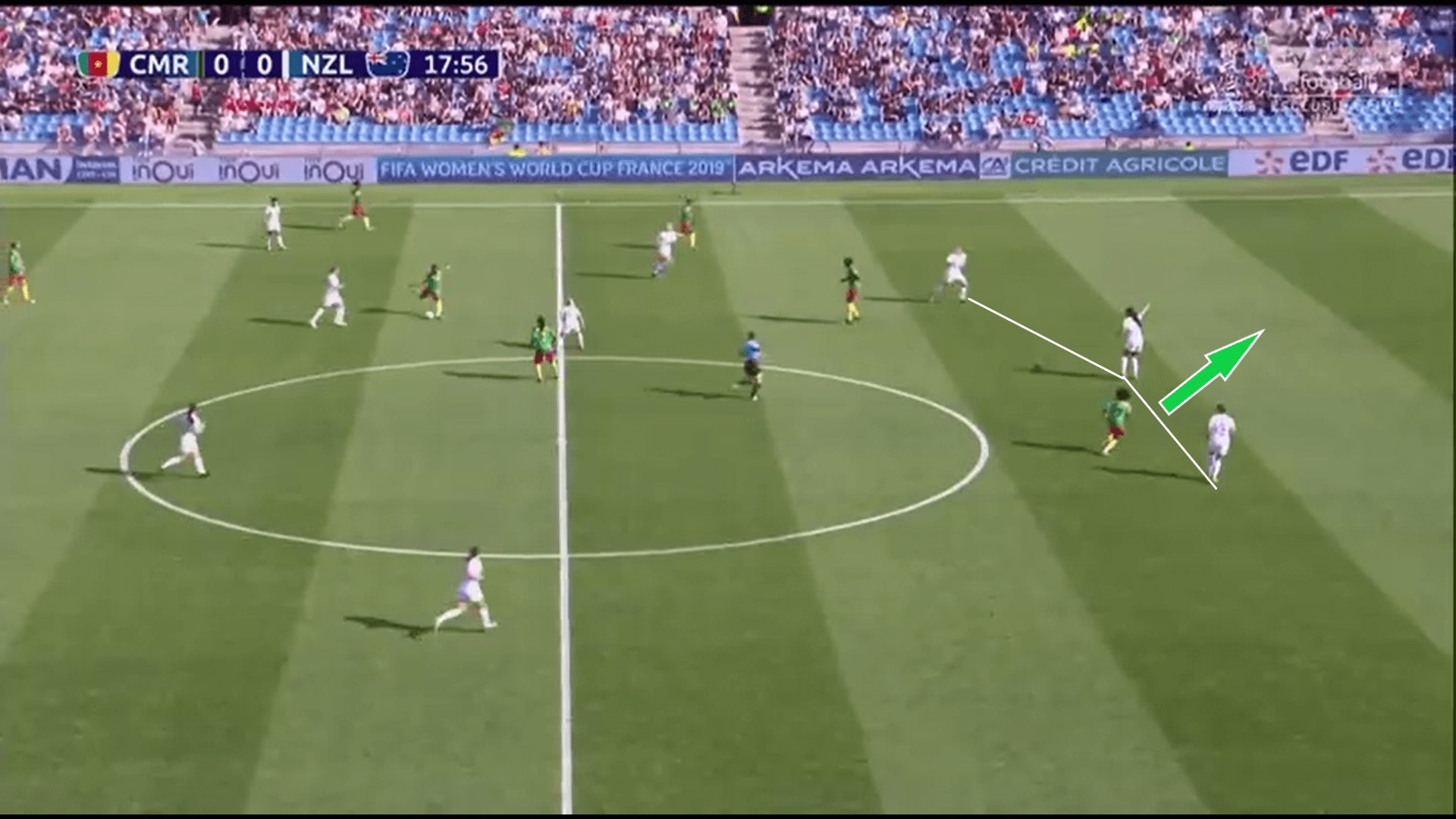 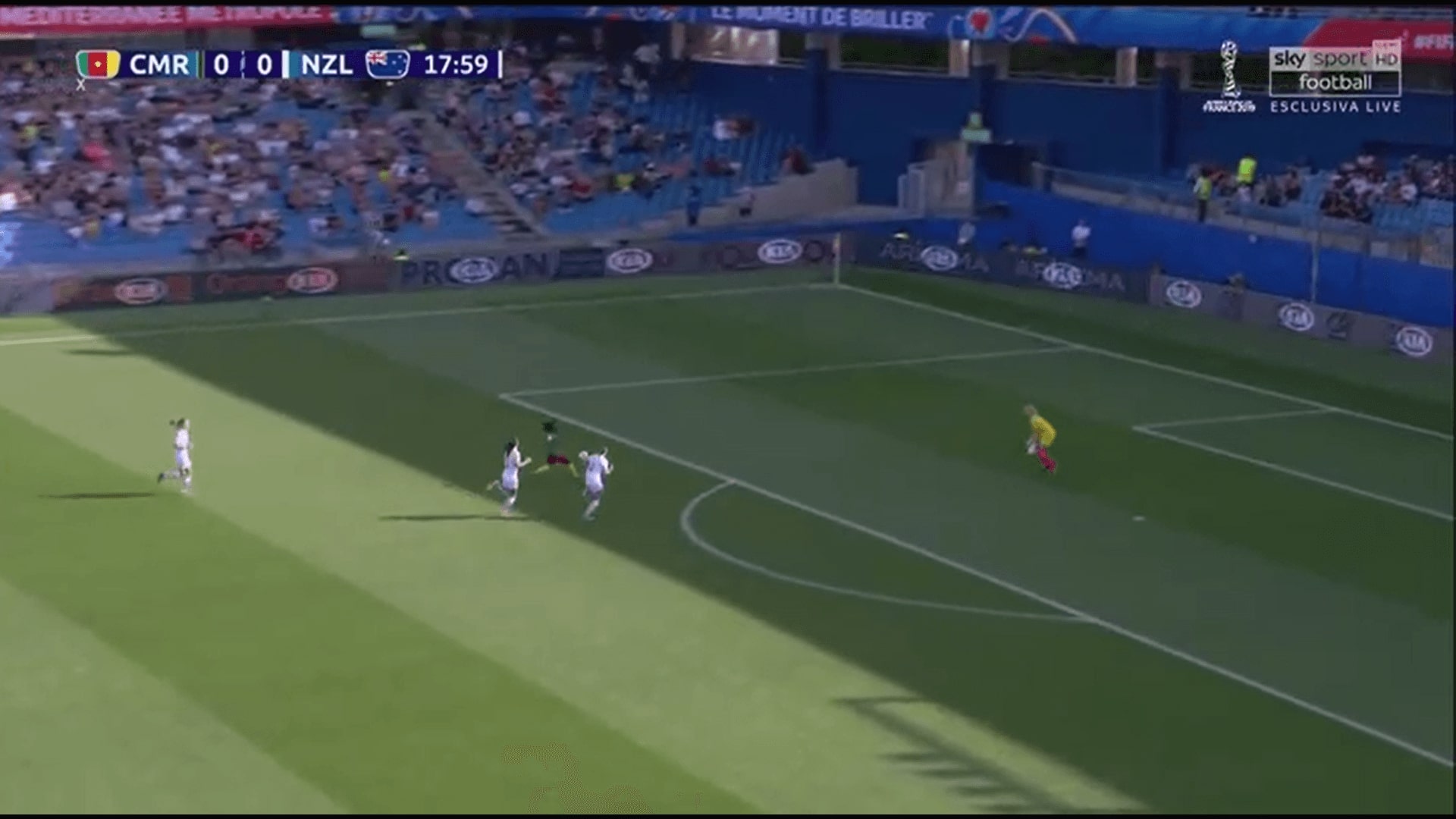 The two images below show another case, which was taken from the second half. This was not a transition. Although it began from a Cameroonian goal kick, there are some similarities. The Football Ferns desperately needed a goal, they committed numbers forward. Their defensive line moved forward as well giving Cameroon spaces to exploit behind the defensive line.

When the ball was progressed to the midfield line, Onguene already ran beyond the defenders. Stott focused on the ball and was unaware of Onguene’s movement. Then, the ball fell precisely onto Onguene’s foot. In the second image, the Football Ferns were in a three versus three scenario. Stott was dribbled past by Onguene, a chance for an attempt again. If not for Erin Nayler’s triple save, Cameroon would have sealed the game. 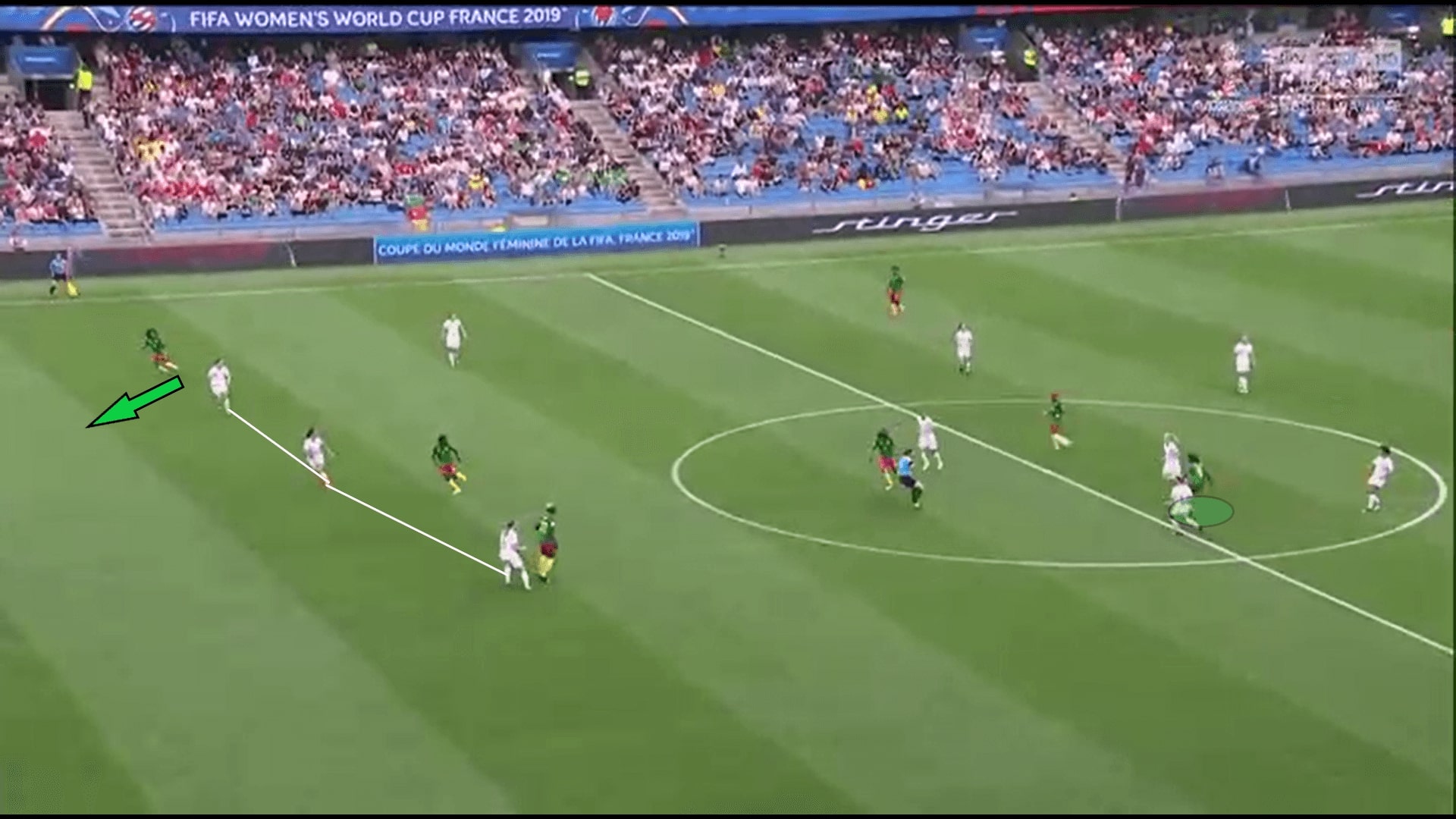 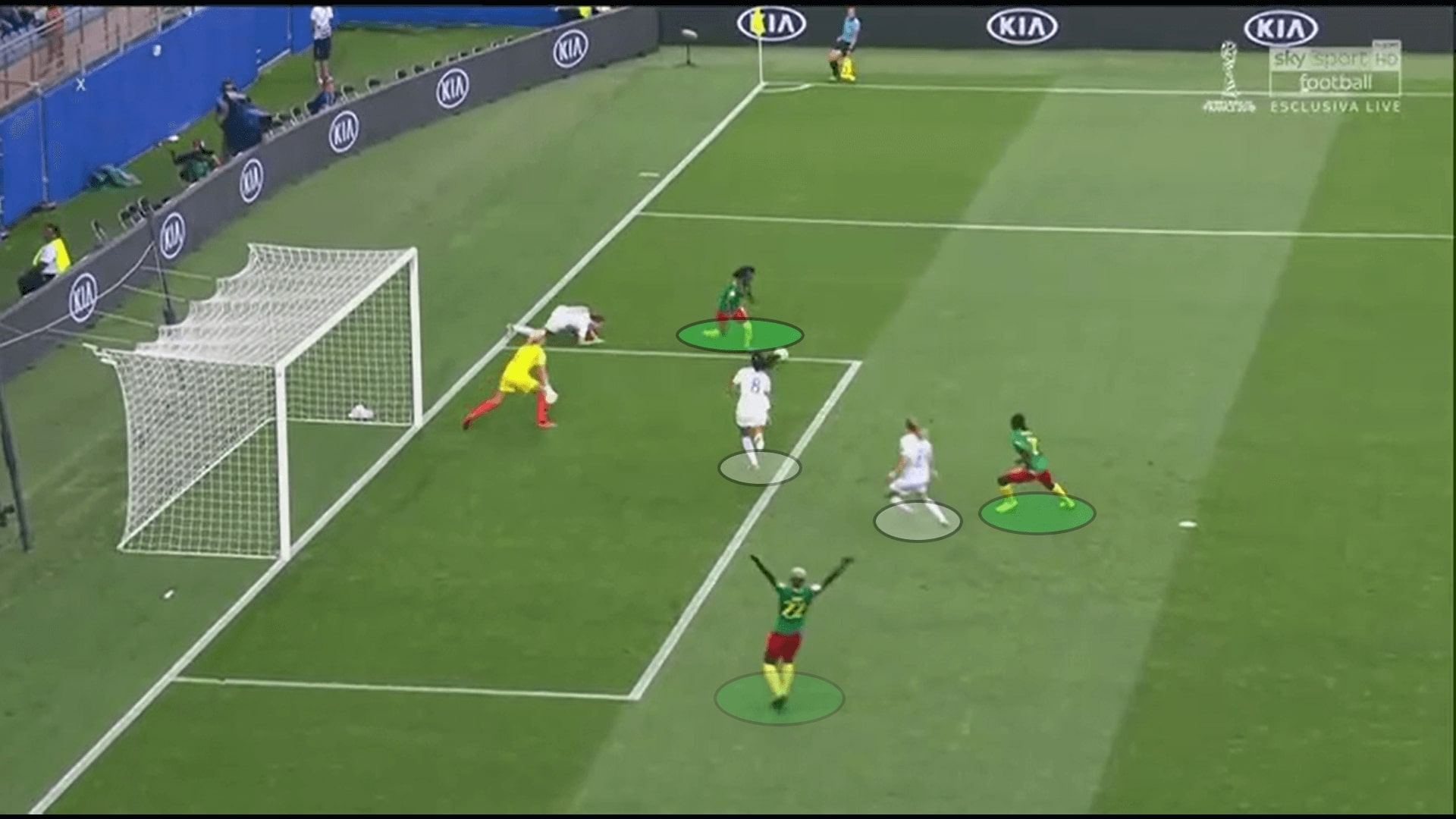 If we look into the xG of both teams, we can see the difference in being able to create chances. In this match, Cameroon’s xG was 1.8, just slightly higher than New Zealand’s 1.4. However, if we deduct the own goal of Aurelle Aowna from New Zealand’s figure, the Football Ferns were left with 0.4 only. It shows the difficulties they had in creating chances. Cameroon’s press did well to reduce the threat of the opponent, especially in the first half.

Cameroon did not set up in a midblock. Instead, they forced the Football Ferns to play long, direct football. They believed they could win the ball in the air. The press was not man-oriented, the idea of the press was to prevent central penetrations. As a result, New Zealand were forced to play the ball wide.

The two below images illustrate Cameroon’s press. There were three players in the Football Ferns’ backline. Cameroon committed six players in their press. However, no one was going to close off the ball carrier. What they did was to contain the double pivot as the triangle drew. Since they shut the passing lanes towards the pivot, the ball was moved to the left side. The New Zealand players did not take the risk of passing between the opposition. 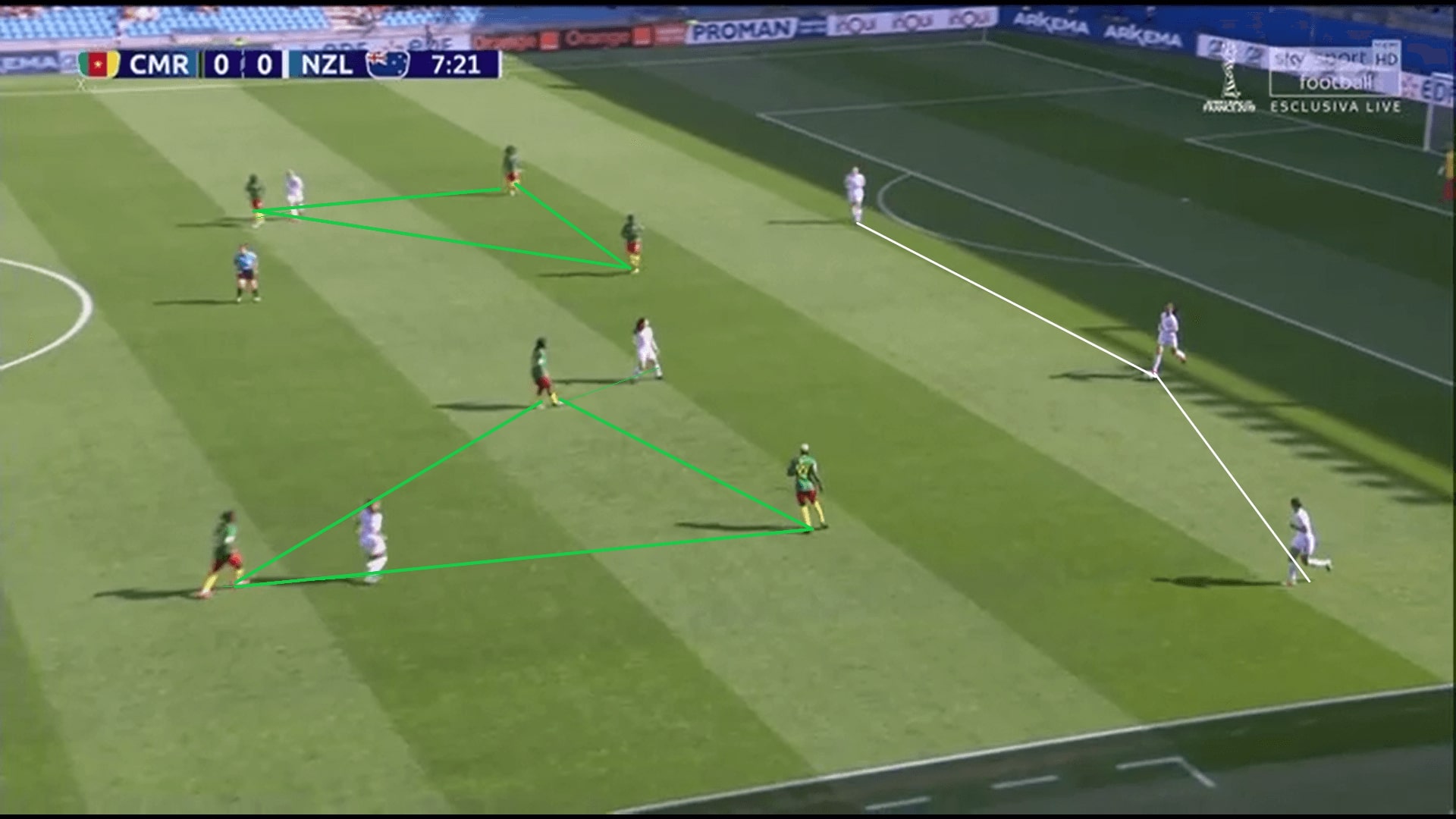 After the ball was moved to the left, the central threat (central penetration) had been eliminated. The mission was the same: to not allow a pass to the centre. They did the same below. Three players were trying to cover all the passing lanes to the centre. The double pivot ran high up on the pitch instead of dropping deep to provide support.

As a result, Ali Riley had no choice but to play the ball upfield. Cameroon regained possession. New Zealand do not possess strikers with physical strength. Gregorius was not able to win the aerial battle. New Zealand found it difficult to create chances. 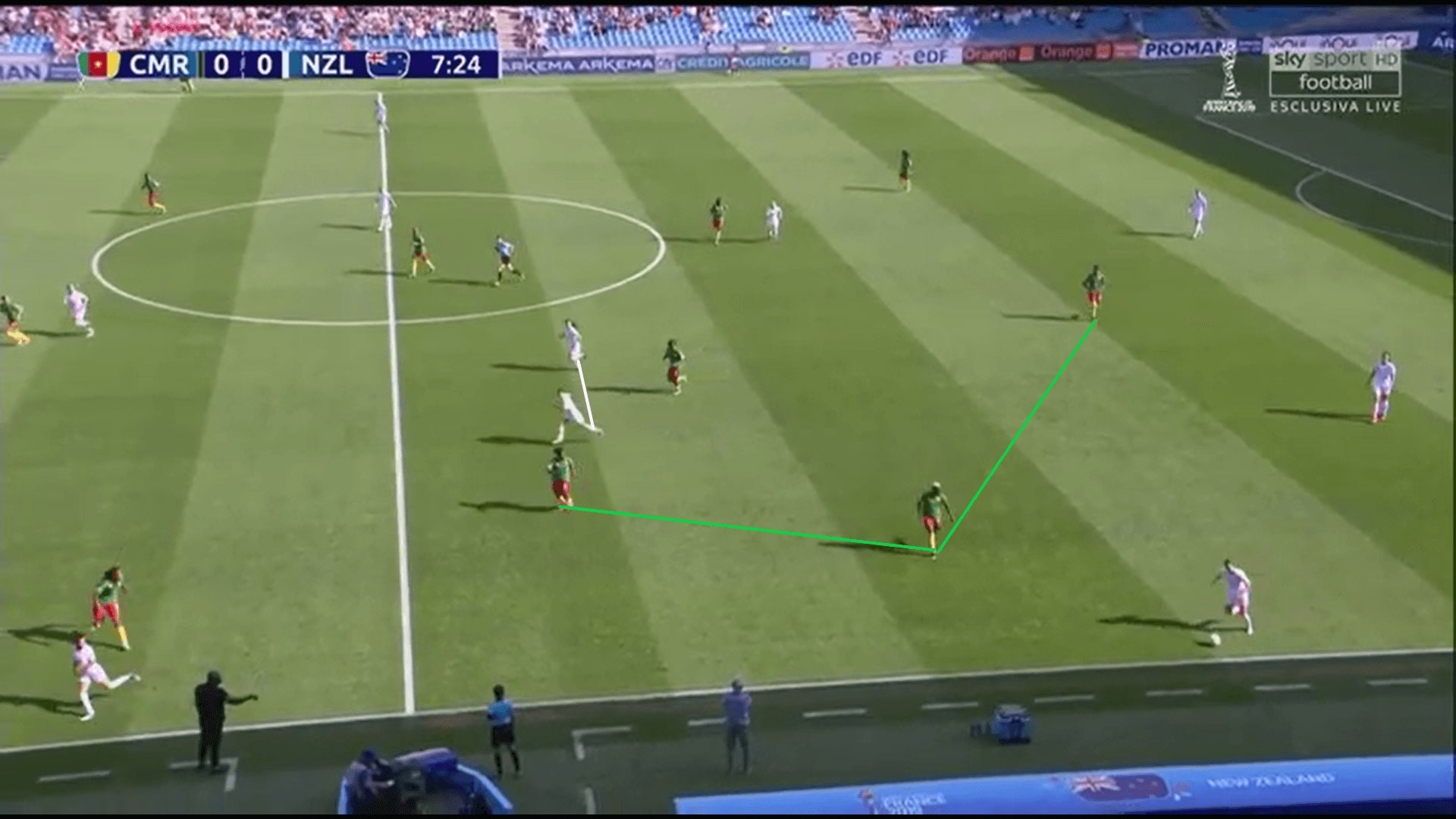 New Zealand had 56% of possession in this game. However, they could not take advantage of their higher possession count. It was because of their impatience, especially in the build-up phases. They gave possession away unnecessarily in some cases. Since Cameroon’s press was not man-orientated, there were free players across the pitch. If the Football Ferns could find the extra player, they could break the press. Unfortunately, they were unable to do so.

The below graph showed the passing network of the New Zealand players (1’-67’). It reflected something useful. First, only one centre-back (Stott) has an arrow towards Katie Duncan, the midfield holding player. No arrows from Stott to Erceg or Green to Erceg. Also, nearly no arrows to Gregorius. It concluded some problems in the New Zealand team.

They did not utilise their pivot player, rather tried to spread the ball wide. The pivot was useless in the build-up phase. The centre-backs did not intend to keep the ball, looking to dispose of it as soon as possible. They played the ball upfield when oppositions closed off. As a result, their forward Gregorius was not able to receive the ball in most cases. 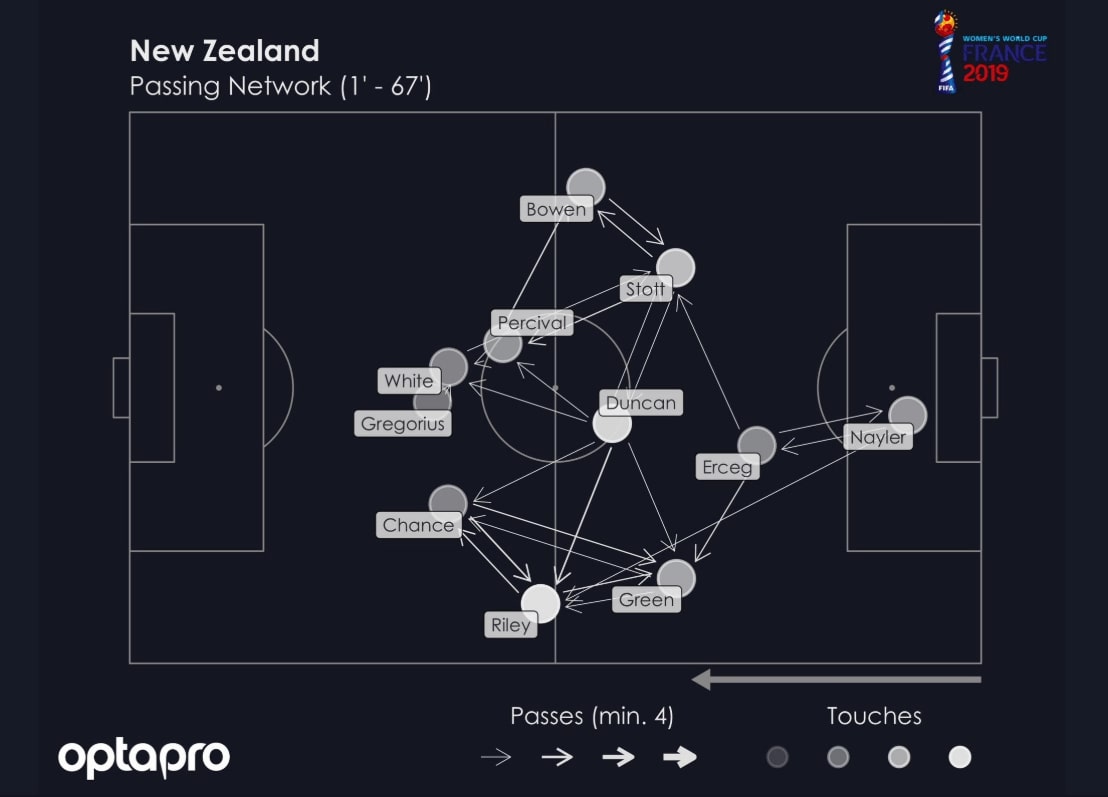 The below image showed how impatient New Zealand were. The Cameroon players tried to press New Zealand to try and dispossess them in their defensive third. Cameroon did this by blocking the passing lane back to the centre-back. Two straight direct options on the right were eliminated since opposition covered the area well.

However, the Stott was not trapped. She still had passing options. Duncan was available with no players around her. Riley, their captain, also stayed on the same horizontal line with Duncan. However, Stott played the ball upfront instead of playing it to Duncan losing possession. If she had passed to Duncan, then Duncan could switch the ball to Riley, to relieve the pressure. 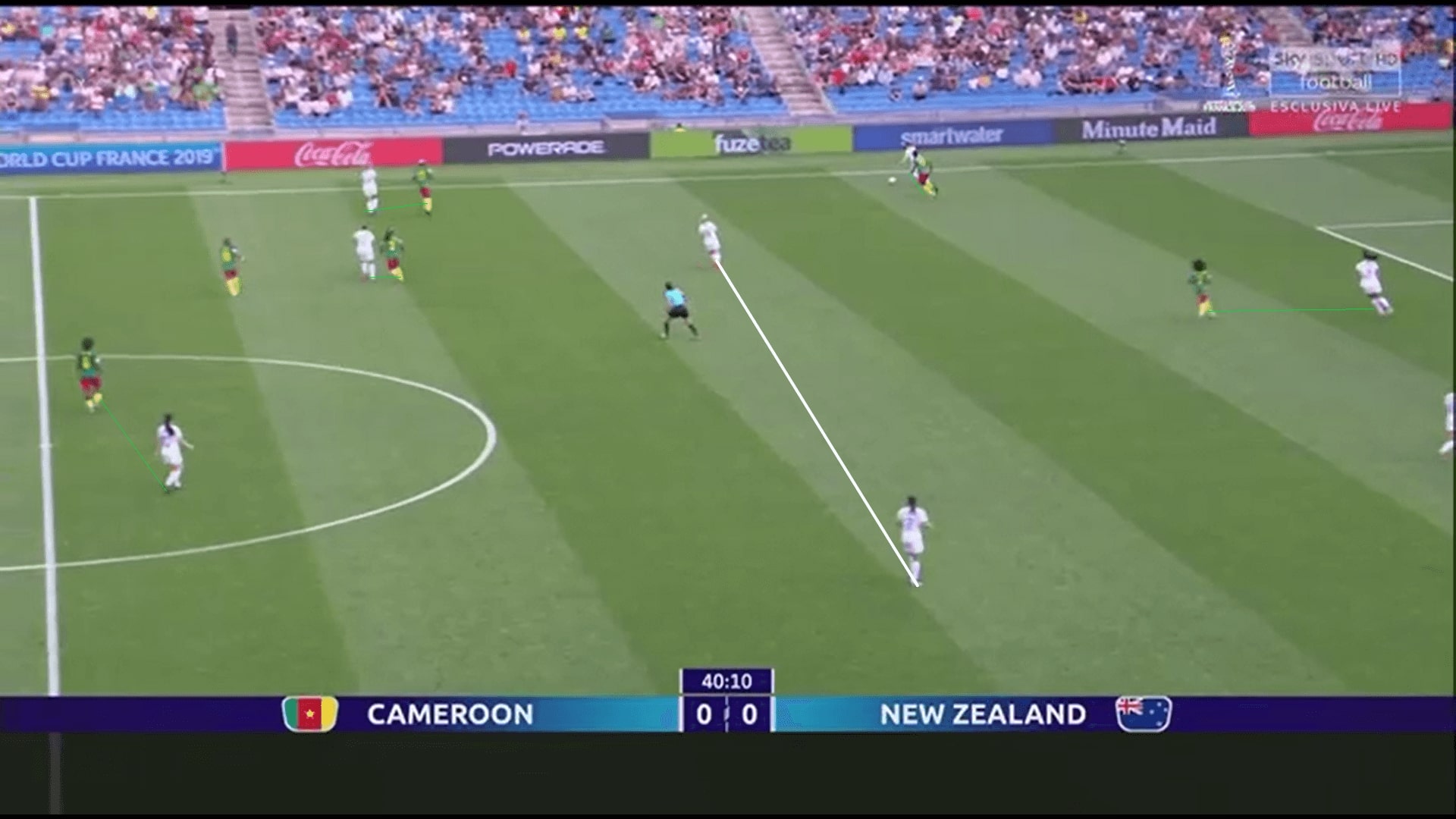 Moreover, the Football Ferns failed to take advantage of the wide spaces. Their players were positioned centrally to draw the attention of the opposition. It made the Cameroonian defence stay compact, leaving their wide spaces unoccupied. They are not a technical team that usually keeps the ball on the ground but all New Zealand needed was to put the ball to those spaces instead of playing through the middle.

The below image is a perfect example. Two Cameroon defensive lines are clearly drawn and stay compact. Therefore, the right flank was open. However, there are no white shirts going to exploit this space. The Football Ferns were trapped in the Cameroon defence. The ball was played to Gregorius in vain. If they could spread the ball wide, they could stretch the opposition defence and shift in crosses. They failed to create more chances because of this. 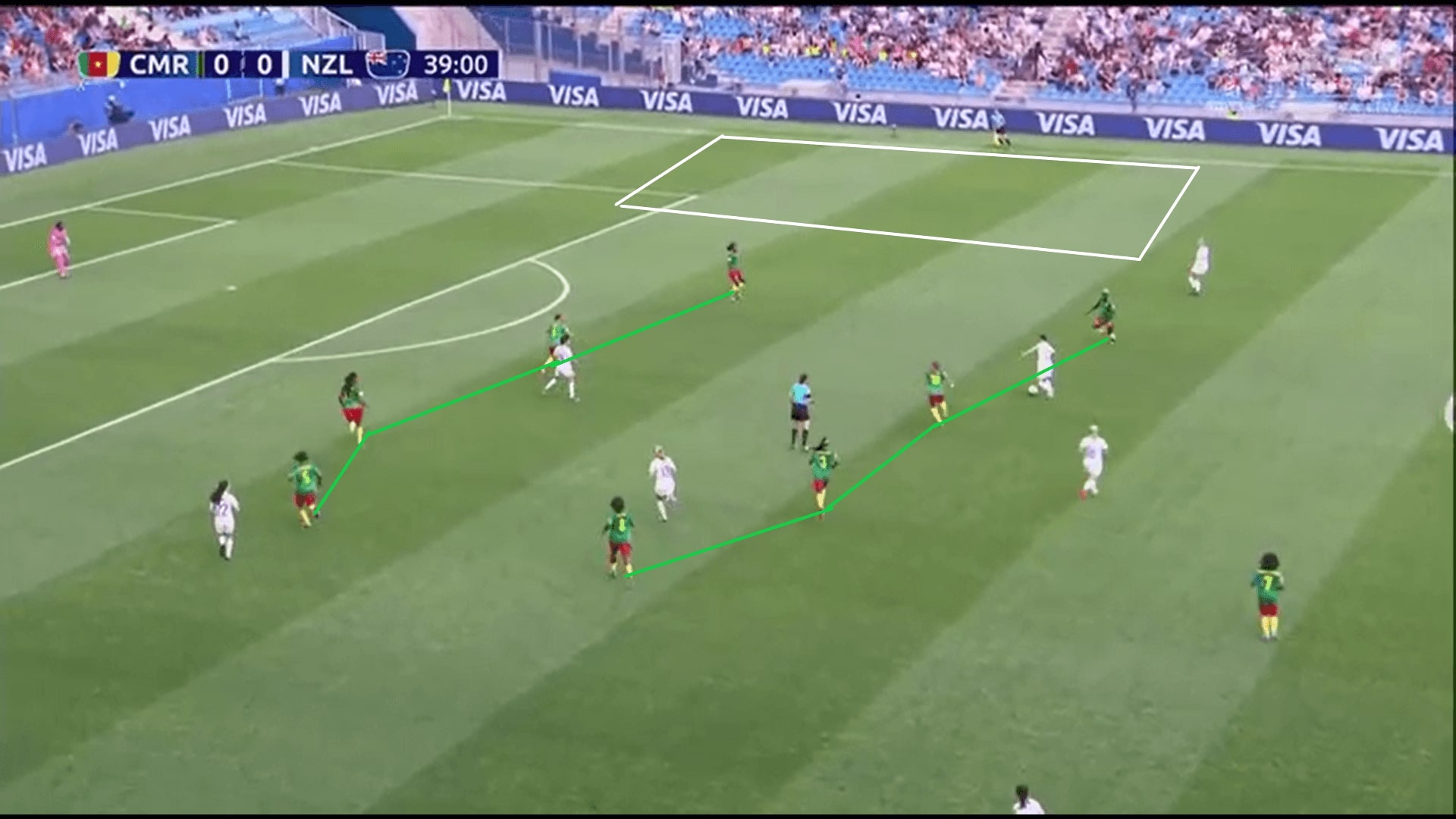 What made Cameroon took all three points was the changes the manager made at halftime. They tried to hit New Zealand’s left flank after the break. With players overloading the left side, they could provide some crosses to create chances.

With the Cameroon players running to the left flank and left half-spaces, they possessed numerical superiority down this flank. As shown below, four green shirts look to overload this area outnumbering three New Zealand players.

Stott, the New Zealand centre-back was in trouble as there were two opposition players in front of her. If she leaves her position to the right, then the space between Erceg and her was too big. Therefore, she could not step out to restore the balance. Cameroon enjoyed numerical superiority here and provided some exquisite crosses, which resulted in Ajara Nchout’s first goal. 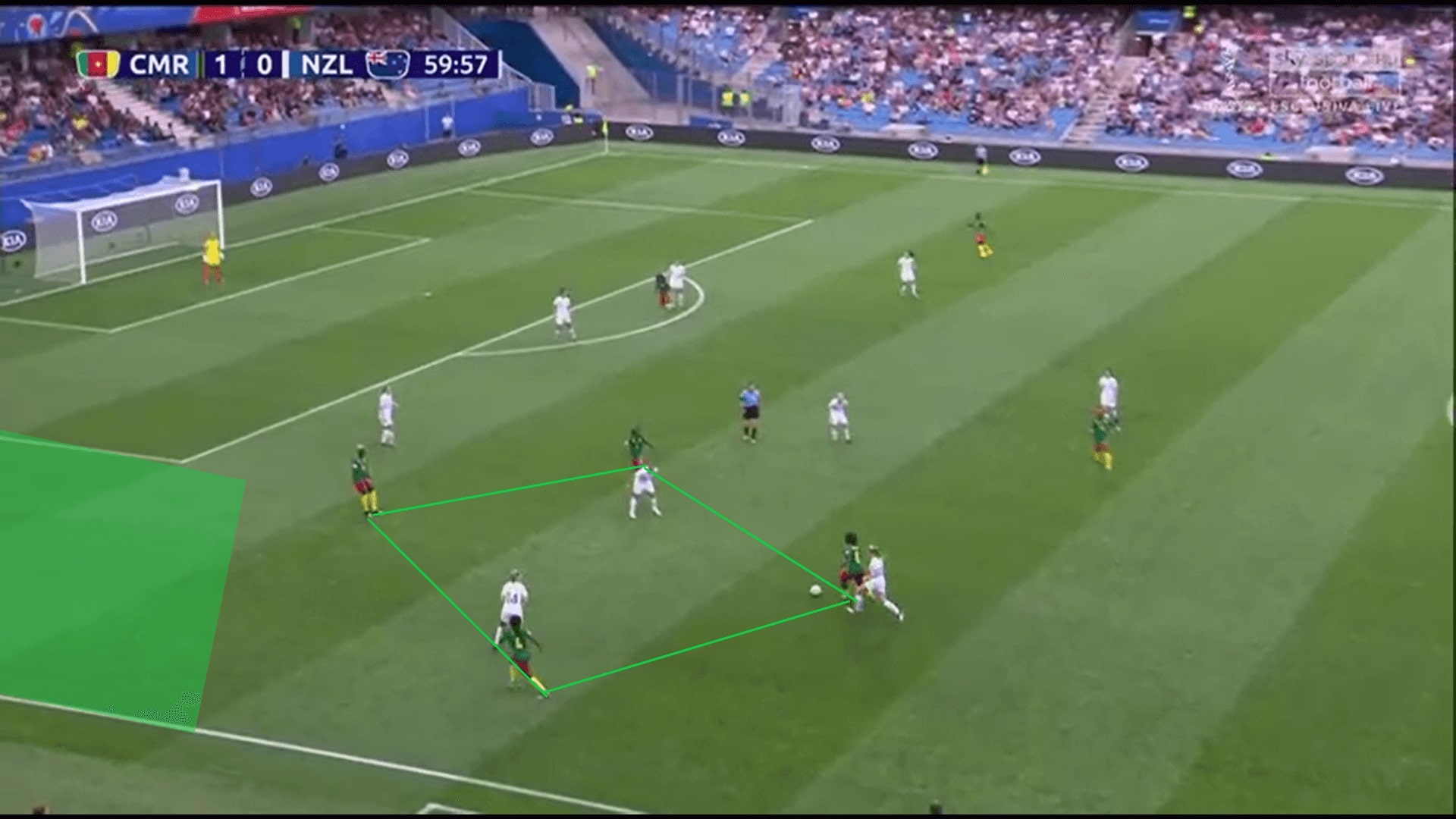 Despite losing all three games in the FIFA Women’s World Cup, Tom Sermmani insisted there were positives in the team. The analysis has shown that New Zealand did well to hold to a draw against the Netherlands for the majority of the game. These matches showed the gulf in quality between the Football Ferns and the best teams in the world.

However, it was slightly disappointing that their conservative approach throughout the competition did not win them a single point. Congratulations to Cameroon who progressed to the last 16. They will face England in this next round.