With the group stages finally coming to a close with this match and the FIFA Women’s World Cup going into the knockout stages only one of the teams in this match had the opportunity to join the worlds best.

Both teams had faced formidable opponents in three times FIFA Women’s World Cup winners United States and 9th ranked in the world Sweden. As predicted both Chile and Thailand lost these matches with the former in a 13-0 loss to the USA which will hear about for years to come. Chile, however, put up more of a resistance in their losses and could qualify for the knockout stages if they could manage to beat Thailand by more than three goals. This, in turn, would see them replace Nigeria for the final stages.

In this tactical analysis, we will look at how Chile narrowly missed out on a place in the knockout stages by winning this match 2-0. 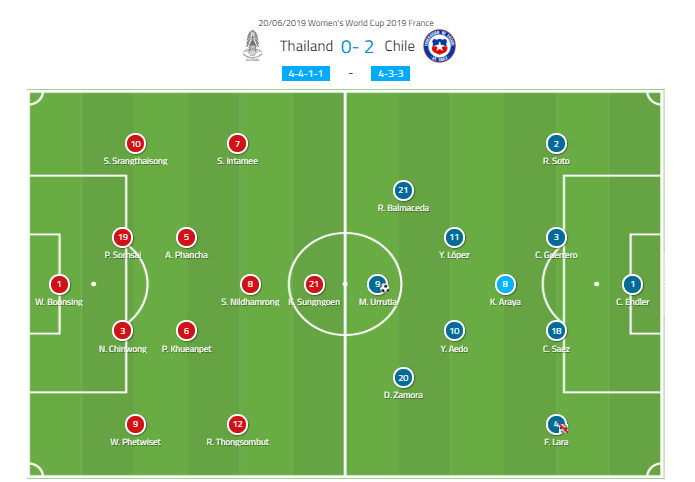 Thailand changed shape slightly from their previous game to a 4-4-1-1. Captain Sung-Ngoen started up front with Miranda Nild sitting just a little further behind. Dangda was suspended and replaced by defender Ainon Phancha.

Chile attacked predominantly down the left-hand side of the field. Coach José Letelier spotted a vulnerability on the right side of Thailands defence. Many of the goals from the 13-0 against the USA came from or was produced down the left flank, attacking Thailands left.

Below we can see Chile in one of their many attacks down the left wing. Attacking down the flanks in the FIFA Women’s World Cup has been quite a common tactic with support from the full-back. In the image below, we can see how Chile’s wing-back is about to make an overlapping run on the left.

The left midfielder, however, takes the ball on further and eventually passes back to the wingback and the ball is manoeuvred to the middle. At the same time, we see how Thailands defence is very compact with its midfield allowing no room for Chile to play in front and behind. The defence is also very narrow, surrendering the wing channels for Chile to play in as collateral.

Below again we can see how Chile has overloaded the left side of the pitch. The Thai defenders have tried to match the numbers and the defence has shifted across in an attempt to stifle the attack. To then re-counter act Thailand’s defence Chile started to pass the ball back to the edge of the final third and crossing the ball into the box hoping for the forwards to strike.

When the opening goal happened, however, it was due to an attack from the middle to the right flank. A long direct pass is made from just inside the Thai half onto the right-hand path of Balmaceda.

After beating her marker and dragging the left centre back across to her, Balmaceda makes a pass infield into the path of Aedo who hits it first time and finds the inside of the post. The ball rebounds into the keeper and classed as an own goal. Despite constant pressure in the first half, the goal was scored in the 48th minute. Chile would need at least two more goals and after proving their method of attacking down the flanks right, more of the same was to come.

Transitioning from defence to attack was done via a pivot for Chile. 8. Karen Araya played a key role for Chile as the pivot in several ways.

The first one was collecting the ball from the defenders and beating Thailands first line of defence (the two forwards). With the forward line beaten, Araya had the field of view to then orchestrate an attack.

With just the two Thai forwards and their passive mid-block turning into a deep block, pockets of space began opening up on the field for Chile to expose as we can see above.

Above we can see Araya in a more playmaking role and splitting the Thai defence wide open with a through ball to the left attacker. We can see what problems this caused the Thailand defence as the centre-back breaks the line to press Araya. The right-back has left two players in tonnes of room.

Chile mixed it up a bit more in the second half realising the slight height advantage of their team to play the ball off the ground. The was a bigger probability to win the aerial battles and this proved true with the second goal.

With a similar overarching ball forward from midfield as the first goal but this time directly to the box, Urrutia managed to head home the second goal. 2-0 and two goals created from long balls from the centre of the pitch.

Above we can see how this played out. You can see Thailand’s compact defence and midfield and interestingly at an angle towards Chile. With no route either side clearly presenting itself, Lopez hits a ball over the Thai players into the box. Urrutia reads this superbly and provides the finish.

Chile had now two game plans. Attack from the wings with crosses and crosses into the box from the centre. Thailand was going to have to mark better to not concede many more.

Above we can see again Thailand have numbers in the middle of the pitch making it much harder to play through. Chile doesn’t have the option of playing around either so a ball over the top beat’s both defensive lines and creates potential goal scoring opportunities.

With one-way traffic heading towards Thailands goal, Chile found themselves a little too complacent a couple of times and found themselves completely exposed. Here we see build-up play from the middle of the field with Thailands attacking player running back about to intercept the ball.

Once the ball is intercepted Thailand break with great pace and manage to get up the field at speed putting Chile on the back foot, scrambling back into their own half. The scrambles proved fruitful as Chile got back into position just as fast as Thailand broke through.

Below we can see how another counter-attack has completely left Chile exposed and a 3v2 situation is created. Had it not been for poor ball control Thailand could have very well found themselves on the score sheet. 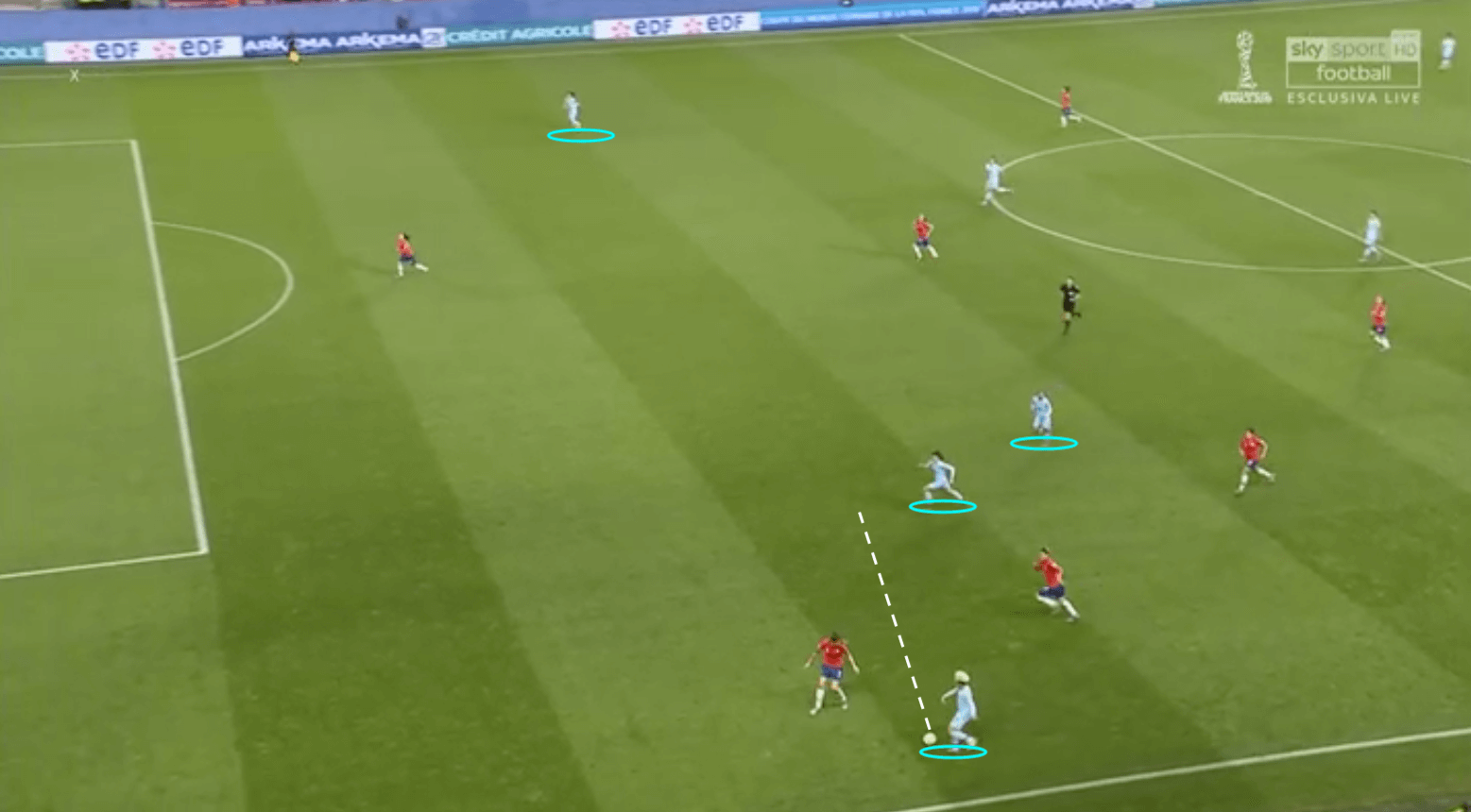 Apart from the two counter-attacks, Thailand did not see much of the ball. Just as soon as the ball was recovered back into possession it was lost due to a poor touch. Ball control is fundamental in the game of football and it was severely lacking for Thailand at this tournament.

An example of poor ball control is above. Thailand find themselves attacking into the final third. A potential through ball with a potential chance on goal is on or a backheel into the oncoming supporting midfielder. Either option is viable and to an extent fairly safe. Instead, the ball is miss-hit into the Chilean centre-back who then starts the counter-attack. Frustrating for Thailand as they spend much of their time in their own half defending.

Chile off the ball

When Chile did lose the ball the intent to win the ball back as soon as possible was evident. Below we can see how, even though without possession Chile refuses to let Thailand build up the play and have a marker for each of possible passing options.

Thailand have not had a great tournament this time around, losing all three matches with a bit of a hammering in each. It will be certainly a case of going back to the drawing board to rebuild for the future.

Chile, on the other hand, will be distraught that they did not take their chances in this game to go further than the group stages. A bit of bad luck and decent last gasp goalkeeping from Boonsing denied them what could’ve been another hammering for Thailand yet again. However, chances blundered Chile will head back with the same task as Thailand. Rebuild for the next tournament. 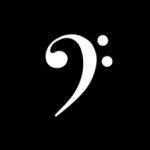