The third and final group stage match of any World Cup is always slightly difficult especially if one or more teams in the group have already qualified for the latter stages of the competition. This was the case in this match given that the top two in the group would qualify as well as the best placed third place teams. With that said, however, the result of this match would go a long way to deciding on the opponents that the Dutch and Canadians would meet in the first knockout round.

In their opening group matches the Dutch had struggled somewhat to win close matches against New Zealand and Cameroon. Canada had performed in a similar fashion to also win their first two group matches. Whilst the Canadians were largely playing with a somewhat limited 4-4-2 structure, the Dutch, on the other hand, are faithful to the Dutch way with a 4-3-3 that is similar to that used by the Men’s international team. 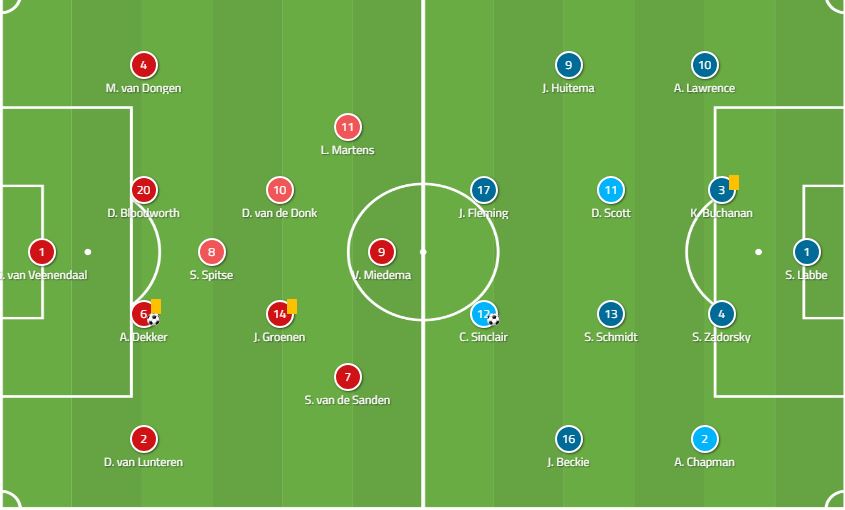 The lineups and structures of the two sides were largely as expected going into this match. For the Dutch, the Arsenal midfielder Danielle van de Donk has impressed throughout the tournament in midfield. They are always, however, most dangerous in the final third with their attacking triumvirate of Lieke Martens, Vivianne Miedema and Shanice van de Sanden all posing a significant threat to their opponents.

For Canada, the excellent and experienced Christine Sinclair continues to lead the attack. On the wings, they boast the dangerous due of Janine Beckie, of Manchester City, and Jordyn Huitema, of Paris St Germain. As we would see as the play developed though these two wide players would be narrow in the attacking phase as the fullbacks were largely left to provide width.

In this tactical analysis, we will consider how the Dutch were able to come away from the match as 2-1 winners.

I actually wrote the tactical analysis of the second group match for the Dutch when they faced Cameroon. In that analysis, I commented on the lack of exploitation from the Dutch in the central areas. Their attacking movements were continuously focussed in the wide areas with every attacking phase featuring passes out to the fullbacks before the ball was then moved forward towards the final third.

In this match, however, we saw the Dutch utilise driven passes from their defensive line into central areas. This may have a relatively simple explanation in that Canada played with two banks of four in the first instance as their defensive block. This structure created spaces centrally that the Dutch could exploit with quick driven passes. Cameroon, on the other hand, played with a 4-5-1/5-4-1 structure with a low compact block that negated these spaces for the most part. 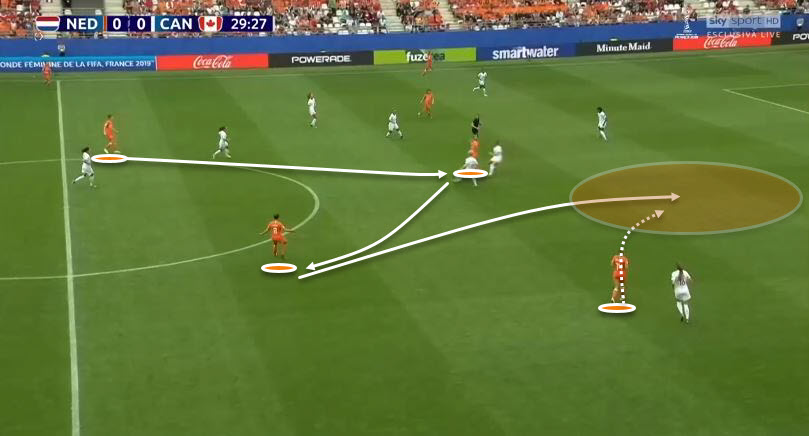 In this example, we see the ball being played forward into the central area by the Dutch. As possession is collected the Canadian defensive players are automatically drawn into the ball to press and engage the player receiving with her back to goal. As they do so they immediately create pockets of space behind them that can be exploited as the Dutch play quickly. The initial pass forward is quickly bounced back to Jackie Groenen who is in space and as she receives the ball she is able to play into space behind the defensive line in order to create a goalscoring opportunity. 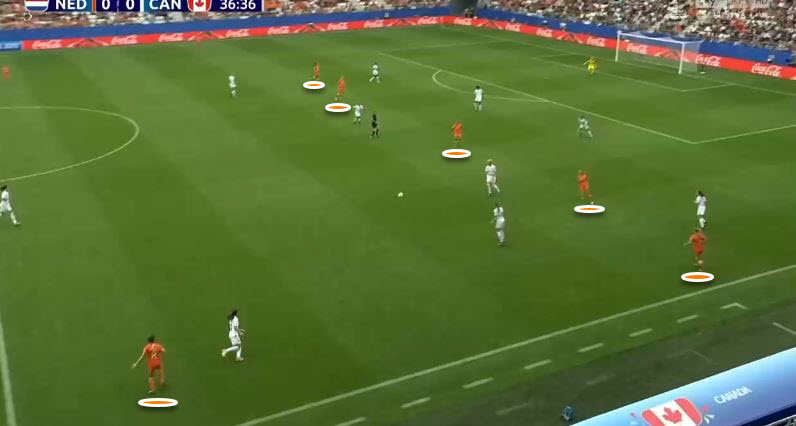 A similar situation here although the ball is progressed far deeper with the pass than in the previous example. The Dutch right-back, Desiree van Lunteren, plays a direct diagonal pass into the feet of Vivianne Miedema who is in the central position. As Miedema receives the ball look at how many players the Dutch have in advanced positions. Five players are spread out across the width of the pitch with the wide areas, half-spaces and central area all occupied. There are also plenty of Dutch players in pockets of space between the defensive line and the line of midfield for Canada. As the ball is played through into these areas the pressure on the Canadian backline is increased markedly.

Throughout this match, the Dutch executed their actions, both defensive and attacking, far better than their opponents. The possession statistics for the match, however, tell a slightly different story with the Canadians being slightly more dominant with 56% of possession to 44% of possession to the Dutch. Despite this, and despite scoring a well-worked equaliser, there were still numerous issues with the Canadian structure in the attacking phase.

Throughout the match, the two aforementioned wide midfielders, Janine Beckie and Jordy Huitema looked to come inside to combine with the forwards. Unfortunately, support from the fullbacks and central midfielders was slow to follow and the Dutch comfortably dominated space.

We can see some of these structural issues here. As Canada launch into their attacking phase, their attacking players are isolated. The pace of the Canadian attack was often so slow that the Dutch were able to filter back into their defensive shape comfortably getting women back behind the ball to deny their opponent’s space. The Dutch felt no need to press the ball until the Canadians started to threaten the final third. Indeed, the passes per defensive action (PPDA) for the Dutch in this match was 6.74. This value shows the number of passes a team allows their opponents to make before the ball is pressed. The lower the value the more urgent the press. The Dutch were happy to wait for the Canadians to come to them before engaging and pressuring the ball carrier. 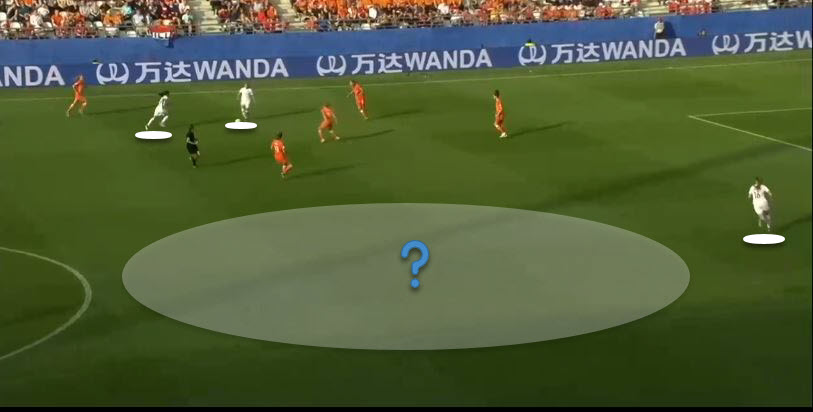 This time we see a situation when the Canadians have progressed the ball more quickly into the Dutch half. Once more though there is little in the way of immediate support for the woman in possession of the ball as they cross into the opposition half. The slow nature of the supporting players for the Canadians meant that they struggled to make and inroads into the Dutch final third. Even when the Canadians were developing the play and creating shooting opportunities the average shot distance that they managed in this match was 20.51 metres.

Despite accessing the central areas of the field more often in this match we still saw the Dutch favour attacking from the wide spaces as they entered the final third of the field. This should come as no surprise given the quality that the Dutch have in these spaces. Time after time we saw Lieke Martens and Shanice van de Sanden get on the ball in the wide spaces when isolated against the Canadian fullbacks. 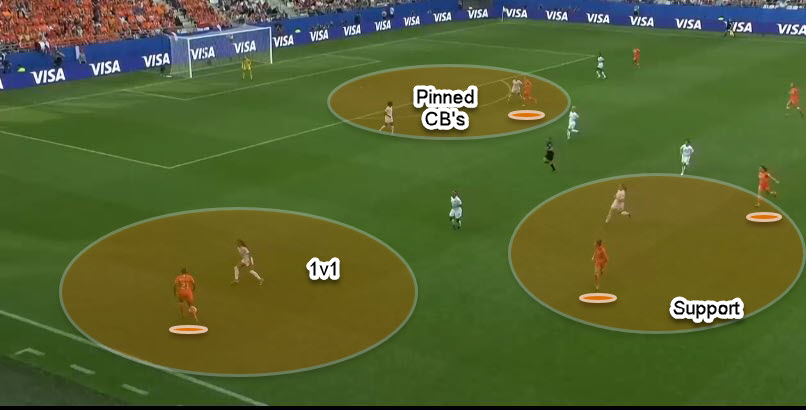 Here we see an example with substitute and match winner, Lineth Beerensteyn, in possession wide on the left-hand side of the pitch as the Dutch attack. When in possession Beerensteyn was supported by the midfielders moving from deeper areas. In the centre, the ever-dangerous Vivianne Miedema was capable to pinning both central defenders back given her goal-scoring ability. This prevents the ball sided central defender from pressing out to engage the ball.

The same thing can be seen here although this time Van de Sanden is in possession wide on the right-hand side. Once again she was isolated against the fullback as the Dutch looked to progress the ball into the penalty area from the wide spaces. Again, the Canadian structure did not allow for the fullback to be adequately supported in a defensive sense and the Dutch were able to break through. There were supporting options for Van de Sanden behind from the centre of midfield and from the fullback position. The Dutch winger, however, would look to stand the fullback up before engaging and attacking her 1v1

In the end, a 2-1 win for the Dutch was largely backed up by the underlying metrics. Wyscout has the Dutch winning by 1.64xG to 0.76xG. The match could have been very different had VAR not ruled out a penalty to the Canadians in the opening minutes. In the end, the European side deserved their victory and showed greater flair and imagination. Canada are industrious and physical but they seem to be lacking the extra edge that could see them progress to the latter stages of the competition.