Magomed Shapi Suleymanov, or simply Shapi Suleymanov, is one of many promising talents coming out of Russian side Krasnodar’s academy. Upon being founded in 2008, Krasnodar have built their way to the top of Russian football, securing Champions League football next season where Suleymanov is likely to play a large role, in parts down to the injury of star man Viktor Claesson.

Suleymanov is a current Russian under 21 international at 19 years old and was involved in Krasnodar’s UEFA Youth League final defeat to Real Madrid before making his transition to the first team last season. Suleymanov originally hails from Dagestan, an even more interesting part of Russia which is starting to produce famous Russian athletes such as MMA fighter Khabib Nurmagomedov. Krasnodar were able to acquire him from Dagestani side Anzhi Makhachkala in 2013, and have since then developed him into the talent we see today.

In this tactical analysis, I’ll show what a top prospect Suleymanov is, and why I would expect many top sides from across Europe to be watching him with eager eyes this coming season.

Suleymanov is a pacy, tricky winger with a body type which could be compared to Eden Hazard’s. He stands at 5″7 inches tall and despite his height has a well-built frame, meaning his centre of gravity is low and that he can change direction quickly.

This lends itself to a key aspect of his game- cutting in from the wing. As a left-footed player, Shapi plays on the right wing for Krasnodar and is always looking to cut inside to get onto his dominant foot. This is evidenced by his heat map for the season, which shows a clear trend from the wing moving into the central areas. 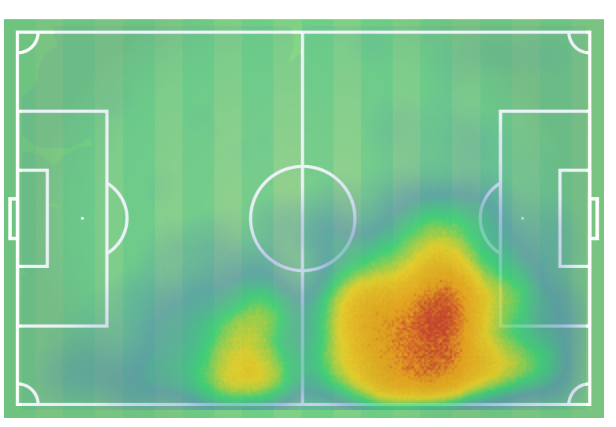 But all this heat map really shows is that Suleymanov plays on the right wing, so how does he contribute to the team in these kinds of positions?

One way is through these kinds of penetrative passes, between the full-back and central midfielder. Suleymanov often gets into these situations through his acceleration, so that when he arrives to a full-back, the central midfielder is chasing back. A right-footed player may struggle to play a penetrative pass into the middle and instead run down the line, but Suleymanov instead plays this pass, which leads to a chance being created.

We can see again below he drives into space quickly and reaches the full-back, where the opposing central midfield player tracks back and presses, creating a passing lane which Suleymanov often exploits.

Suleymanov is even more useful in situations where the central midfielder doesn’t track back, leaving the full-back one against one. Here, Suleymanov uses his low centre of mass to quickly shift himself and the ball inwards with a drop of the shoulder, gaining an extra yard on the defender. This allows him to showcase perhaps his best quality, his long-range shooting.

Suleymanov has 30 career goals, and an xG total of 21.54, which showcases his efficiency and his quality at scoring ‘difficult goals’. In fact, his two glorious strikes against Leverkusen and Valencia earned an xG total of 0.11 and 0.02 respectively.

How his role helps Krasnodar

The role of wingers playing on the side opposite to their dominant foot is not a new one, but players like Suleymanov really highlight just how effective the system can be. Some of the most effective wingers have been involved in this kind of system over the years, such as Ribéry and Robben at Bayern, and more recently Salah and Mané for Liverpool. We are seeing this used more and more, due to the ever offensively evolving role of the full-back.

Most teams no longer favour a player playing on the same side as their dominant foot as this forces them out wide and to put crosses into the box, something which is becoming a key part of the full-back’s role. Krasnodar’s full-backs overlap whenever possible, and so by Suleymanov being left-footed, full-backs can create more space for him and he can also create more space for a cut back to the full back.

Below we can see a common feature in Krasnodar’s play, in that the full-back Petrov positions himself wider and occupies the full-back, while Suleymanov moves narrower and between the space of the central defender and opposition full-back, which is made bigger by the wide positioning of Petrov and leaves the opposition full back with a dilemma. This structure means that Suleymanov is narrower and therefore closer to the net.

Another key feature of Suleymanov’s game is his ability to draw a foul. Suleymanov has been fouled 1.99 times per game this season, which when compared to other wingers in the Russian Premier League such as Nikola Vlašić, is higher. Most of Suleymanov’s averages are boosted by the lack of minutes he plays, as he often comes off the bench for Krasnodar, however, his stats are still impressive.

Another massive strength of Suleymanov’s play is his ability in transition, thanks to his excellent acceleration and dribbling skills.

Suleymanov has a decent understanding of defensive positioning, and on occasions late in games has helped his side with wide overloads. However, his main focus in these situations is maintaining a good position with which to transition from. For example below, we can see he covers the pressing full back, which leads to a two against one where Suleymanov prevents the cross from entering the box.

Below we can see an example of his ability in transition. Suleymanov is in a good defensive position, helping to defend the wide area while Krasnodar play a narrow back four. Upon Krasnodar winning the ball, Suleymanov can drive into space quickly and launch counter attacks for Krasnodar. He is extremely aggressive on the ball, and so any space which the opposition concedes, Suleymanov is likely to drive into and look to beat a player, which is evidenced by his 2.92 progressive runs per game.

For a player with the qualities mentioned, you would expect him to be somewhat of a creative player. Suleymanov has however only registered three assists in all competitions this season, which could be identified as a weakness in his game, although his style of play doesn’t lend itself to assists too much. He has three second assists as well as three actual assists and his xA value of 6.35 suggests he should have registered more assists, so why is his assists tally so low?

Firstly, I would suggest that his lack of minutes played this season will have impacted his assists total, as often when he comes on he creates an opportunity for himself and scores it, and so next season with more game time, I would expect his assists total to increase.

His positioning is something which I feel is a key factor in his lack of assists this season, in that because of Krasnodar‘s crossing style of play, Suleymanov is often used a space creator for the full back.

In the example below, we can see Suleymanov moving centrally with a man on his back, which creates space for the full-back to drive into. Suleymanov thrives with players at his back, as his quick change of direction allows him to move past players or to draw a foul.

In this example below also, we can see Suleymanov again with his back to goal in a central area, dragging the opposition full-back into a central area and creating space for the full-back to deliver a cross. Suleymanov is unable to turn on this occasion as he is fouled from behind.

Shapi Suleymanov has already proved himself a vital player for Krasnodar and is becoming famed as a big moment player for the side. He will be looking to push on further with more game time this coming season and should his impressive form continue, I would not be shocked to see him earn a move to one of Europe’s top five leagues, where any high pressing, energetic side would be happy to have him.

As such I feel a move to Germany could be a good option to him should the opportunity arise next year, as his game’s emphasis on transitions and speed would fit in well in Germany. It will no doubt be interesting to see how he deals with more game time for Krasnodar this season.