They say styles make fights, and both teams certainly produced a fight in a pivotal game that may have ultimately decided the winner of the Russian Premier League. In terms of styles, Zenit are Krasnodar’s kryptonite. Krasnodar are a pacy, energetic side that thrive in moments of transition and can and often will press any team given the opportunity.

The problem when playing Zenit is that they often aren’t given the opportunity, and in both games against Krasnodar this season, Zenit have not allowed Krasnodar to implement their style of play on them. In this tactical analysis, I will look at how Zenit were able to somewhat nullify Krasnodar’s strengths, and how both teams contributed to such a chaotic match.

Both sides lined up in their familiar shapes, with Krasnodar’s formation becoming more of a 2-4-4 when in possession deep in Zenit’s half, with both full-backs playing high and wide. Zenit looked to stay compact and trusted the ability of Artem Dzyuba and Sardar Azmoun would be enough to cause problems to Krasnodar’s back line. 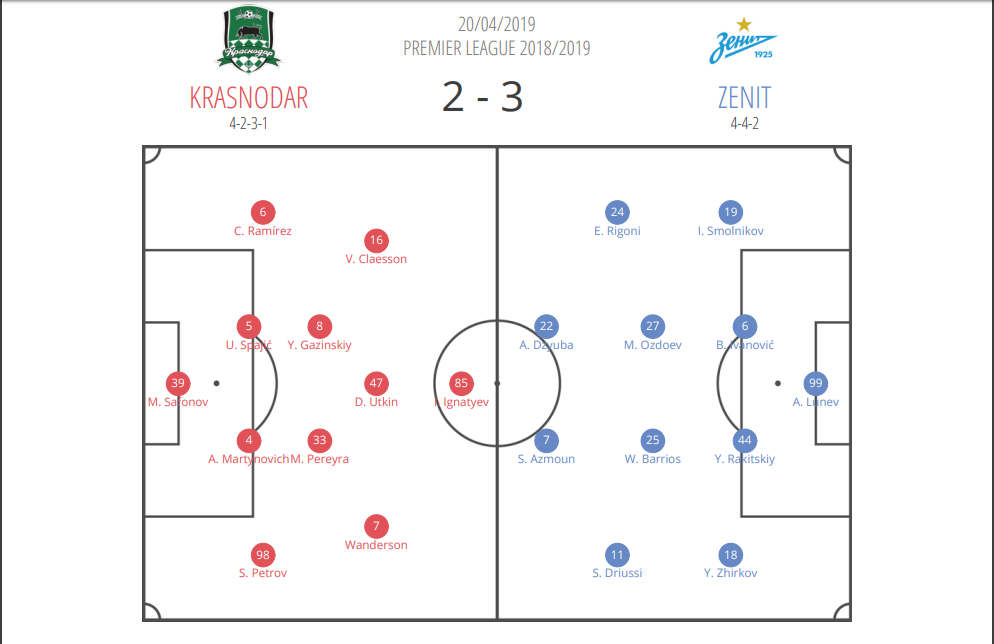 Although the game itself was anything but cagey, both teams looked to lure each other out when in possession in order to progress up the pitch.

Zenit make themselves a difficult team to press. With 6’5″ striker Artem Dzyuba up front, if teams commit men forward to press as Krasnodar often do, then Zenit can bypass the press with a long ball to him. In the reverse fixture, Krasnodar fell right into Zenit’s trap as we can see below, with six players pressing high up the pitch. After one long ball by Zenit’s goalkeeper to Dzyuba, these six players were bypassed.

Seemingly learning from their mistakes, Krasnodar employed more of a mid-block than the high press which was seen in the first fixture. This meant that when Zenit invited pressure, Krasnodar didn’t press and instead waited for Zenit to move onto them before pressing. If we compare the image below with the above image, we can see a massive difference in the way Krasnodar pressed.

Usually, one would expect to see Krasnodar’s whole midfield unit stepping up and man marking Zenit’s midfield in a man-orientated press. Instead, as we can see below, Zenit’s midfielders were allowed to drop deep and were not followed, which meant that long passes to Dzyuba didn’t result in overloads for Zenit.

We can see below an example of how Krasnodar’s mid block allowed them to be compact. When the ball was played wide to either full-back, Krasnodar’s wingers could move across to press and were covered by the central midfielders.

Usually, these wingers would be making recovery runs having pressed the opposition’s back line, but with a mid-block press utilised, Krasnodar were much more controlled out of possession. This compactness from Krasnodar was however often let down through individual errors or from players not winning individual duels.

Lacking players high up the pitch with good pressing characteristics, Zenit sat off Krasnodar and allowed them to build from the back as we can see below. Matvey Safonov is allowed to play the ball short to start an attack, while Zenit’s midfield unit sits deeper. Zenit therefore also chose to remain compact, and upon winning the ball looked to give Dzyuba and Azmoun the chance to combine.

Zenit were able to hurt Krasnodar by creating duels between Dzyuba and Azmoun and Krasnodar’s centre-back pairing. Dzyuba was physically dominant, while Azmoun and Zenit’s wingers and full-backs could play off his hold-up play and deliver crosses into the box.

From statistics we can clearly see who was dominant in these duels, with Krasnodar’s centre-back pairing winning only 18 out of 43 duels in the game. Zenit’s first goal was created by their ability to quickly create overloads in the box. Sergey Petrov was dragged out of position from right full-back to quickly deal with the cross. With Zenit creating a 4v3 in the box though, a perfect cross to the back post created a goal for Zenit.

Much of the game’s chaos can be put down to Krasnodar’s full backs and their end-to-end work throughout the game. They were a key component in Krasnodar’s attacking play, sitting high and wide and making overlapping runs to create space on the inside for players like Viktor Claesson.

We can see below that with the overlapping run, Krasnodar are preparing to overload the box with runs from the back post, centrally and from Wanderson into the pocket left by Yuriy Zhirkov at full-back.

On the opposite wing, we can see again Krasnodar’s full-back pushing on while the winger drops into a central pocket to receive the ball. If this pocket was cut off, Krasnodar could use Cristian Ramírez’s pace to drive at Zenit’s full-back and deliver a cross.

The decisive factor was set pieces, with Zenit scoring twice from dead ball situations. Yaroslav Rakitskiy’s free kick was more or less unstoppable. There was a strange trend in Krasnodar’s defending of corners in the game, and amongst all the chaos late on, Krasnodar seemed to lose focus of their routine and it ultimately cost them a point.

Early in the game, Krasnodar marked man to man, which led to opportunities for Zenit. Notice below how Krasnodar mark players on the edge of the box and attempt to follow their runs by running with them, a particularly ineffective way of marking a player.

By also following the runner out to the edge of the box and back in, a large space is created for the Zenit player to run into, as we can see below. Dzyuba’s ability to out-muscle an opponent also makes him much harder to man mark, and so a zonal marking system looked as though it would benefit Krasnodar.

As the game went on, Krasnodar adapted well, and began to employ a zonal marking system as we can see below, which led to more clearances. However, there were still large areas of space created by some players man marking players on the edge of the box and running in. The near post was well occupied in this case, and a large space at the back post still existed.

The image below shows Zenit’s winning goal. There is still a large space as Krasnodar look to get as close to Zenit’s players as they can. This however put them at a disadvantage, as everyone is so close that it was very easy for Dzyuba to out muscle and gain a yard on his marker. With no players directly in front of him in the space highlighted, no blocks can occur for Krasnodar and Dzyuba had a clear path at goal.

In the end, Zenit’s experience and nerve shone through, with Krasnodar showing the same inexperience late on which they showed against Valencia. Both good performances were ruined late on. Krasnodar can take encouragement from these results and again showed how good they can be, but ultimately have to improve and learn to be calmer in the big moments which often decide football matches.