Borussia Monchengladbach welcomed RB Leipzig to Borussia-Park, hoping to arrest a slide that has seen them slip from third place in February, level on points with Bayern Munich, to fifth place. Falling out of the top four in the Bundesliga means they now risk missing out on UEFA Champions League football next season. Winless in their last five home league matches, Dieter Hecking is hoping to finish his final season at Borussia-Park strongly, as he is due to be replaced next season by Marco Rose from Red Bull Salzburg.

RB Leipzig entered this match having won six straight away league games and knew a victory would put them 10 points ahead of Borussia Monchengladbach and almost ensure they would be playing Champions League football next season. The Saxony side came into this match in better form, with only one loss since the beginning of 2019.

The home side came into this match with clear attacking intent, looking to turn their season around and get three desperately needed points. Unfortunately for Dieter Hecking, and Gladbach, they ran into a well-organised and defensively compact side that was able to easily absorb pressure before attacking swiftly from the wide areas. RB Leipzig took the lead in the 17th minute after Marcel Halstenberg was brought down inside the penalty area by Patrick Herrmann.

This lead was doubled in the 53rd minute when Halstenberg scored again to give RB Leipzig a 2-0 lead. The side from North Rhine-Westphalia was able to cut the deficit to 2-1 when Alassane Pléa scored in the 61st minute. However, this is as close as Gladbach would get. RB Leipzig had a couple of opportunities to kill the match off, but Yann Sommer made some key saves to see the match end 2-1.

Dieter Hecking stuck with the 3-4-1-2 formation that he’s used in the past two matches, making only two changes to the side that won 1-0 against relegation-threatened Hannover 96 a week earlier. Nico Elvedi was left out of the squad, being replaced at centre-back by Tony Jantschke. Raffael got the start up front, replacing Lars Stindl who fractured his leg against Hannover and is out for the rest of the season.

Ralf Rangnick named an unchanged side in consecutive matches in the Bundesliga for the first time this season. The German stuck with the 3-5-2 that he used to great success a week earlier in a 2-0 victory at home against Wolfsburg.

Several key tactical trends led to RB Leipzig’s victory. First, we will look at RB Leipzig’s defensive organisation and how they were able to restrict space for the home side. We will examine the attacking struggles of Borussia Monchengladbach against this defence. We will also breakdown how RB Leipzig were able to attack quickly through the wide areas to compound the home side’s misery.

RB Leipzig have the best defensive record in the Bundesliga this season, conceding only 23 goals this season. That’s six goals better than league leaders Bayern Munich. Besides, they’ve only let in five goals since they returned from the winter break. They have also recorded a league-high 15 clean sheets this season.

As we can see in the image below, the midfield stayed compact in the middle of the pitch to control the space. The strikers worked to prevent passing access into the midfield. As a result, Gladbach would move the ball from side to side with the centre-backs. As the ball is moving to the far side of the pitch, the RB Leipzig’s right wing-back, Konrad Laimer, steps out of the defensive line to maintain access to Gladbach’s left wing-back, Thorgan Hazard.

Leipzig were periodically aggressive in pressing higher up the pitch, working to recover the ball and create quick counter-attacks. The images below are a good example of how their high pressing created an opportunity.

Cunha and Werner press as the ball is passed back to the Yann Sommer, the goalkeeper. He has limited passing options and tries to thread a ball to Christoph Kramer. Kevin Kampl arrives at Kramer at the same time as the ball, forcing the ball free. He then passes the ball to Arsenal target Emil Forsberg, who dribbles forward on the attack.

As a result of RB Leipzig’s effective defence, the most common method of attack for Dieter Hecking’s side was long diagonal passes. The centre-backs frequently played the ball high into the space behind the opposing wing-backs, but they had very little success with this attack. The graphic below shows that most of the home side’s passes were between the centre-backs and unsuccessful long balls into the half-space. 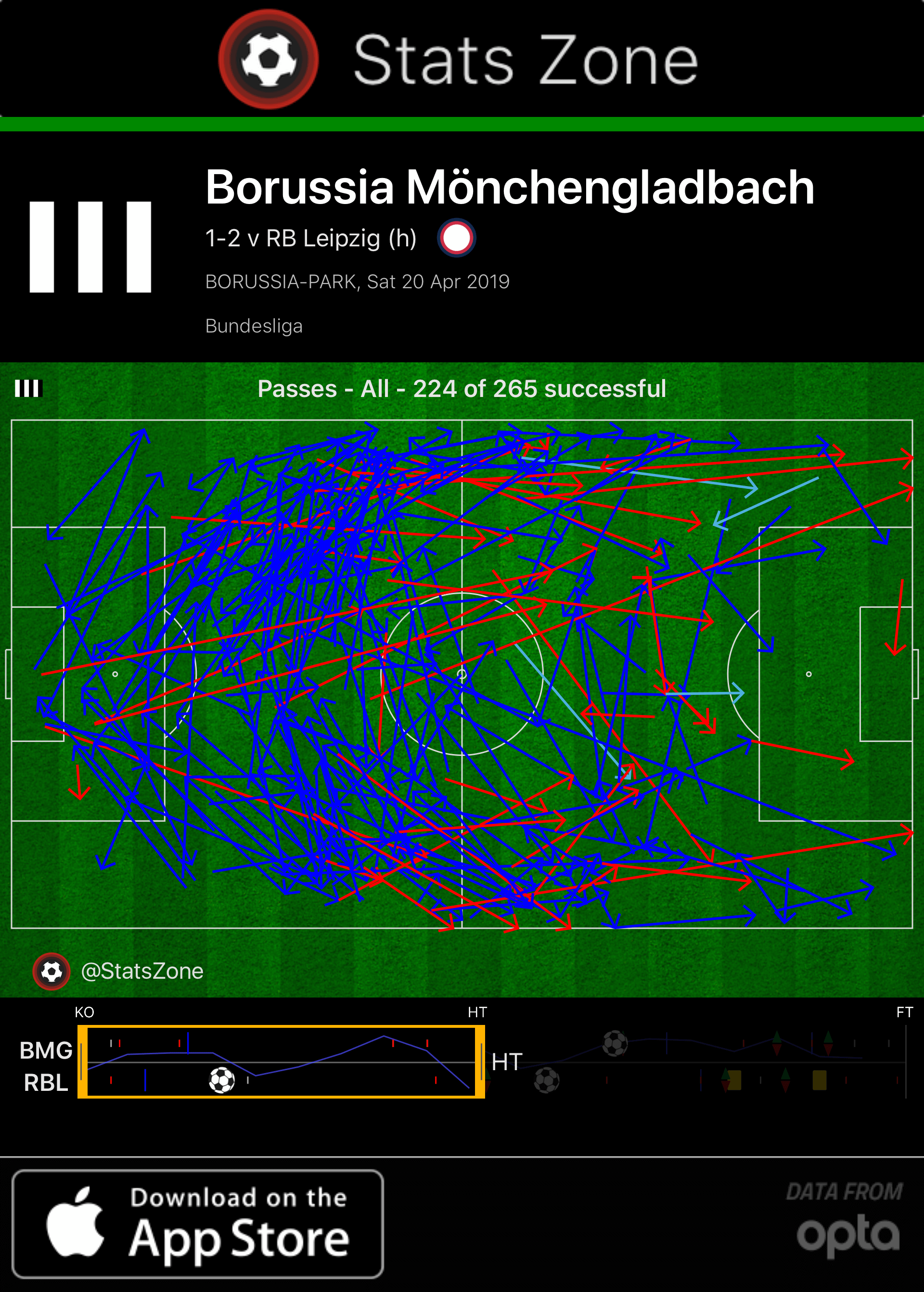 As Monchengladbach had little success with this method, Dieter Hecking got increasingly frustrated. This frustration only increased in the 17th minute, as his side gave away a penalty that allowed RB Leipzig to take the lead.

Bullying the Foals out wide

With a solid defensive base, RB Leipzig’s attack improved as the match progressed. They had success operating in the space behind Gladbach’s wing-backs, as they were frequently caught up the pitch during the home side’s prolonged possession.

As a result, it was left to the wide centre-backs to step out and mark attackers as they exploited the open space behind the wing-backs. This meant some gaps opened in the middle of Gladbach’s defence.

As we can see in the image, RB Leipzig are moving into the left half-space and working the ball in behind Patrick Herrmann. Timo Werner receives the ball and then plays it to Marcel Halstenburg as he bursts forward.

With Kevin Kampl playing as the deepest midfielder, Forsberg and Marcel Sabitzer played in the number eight roles ahead of him. They both made similar movements, out into the half-spaces to combine with the overlapping wing-backs and the two strikers as they drifted into the channel between the centre-backs and wing-backs. Most of the key passes that RB Leipzig created came from these areas, as Gladbach struggled in this area throughout the match. 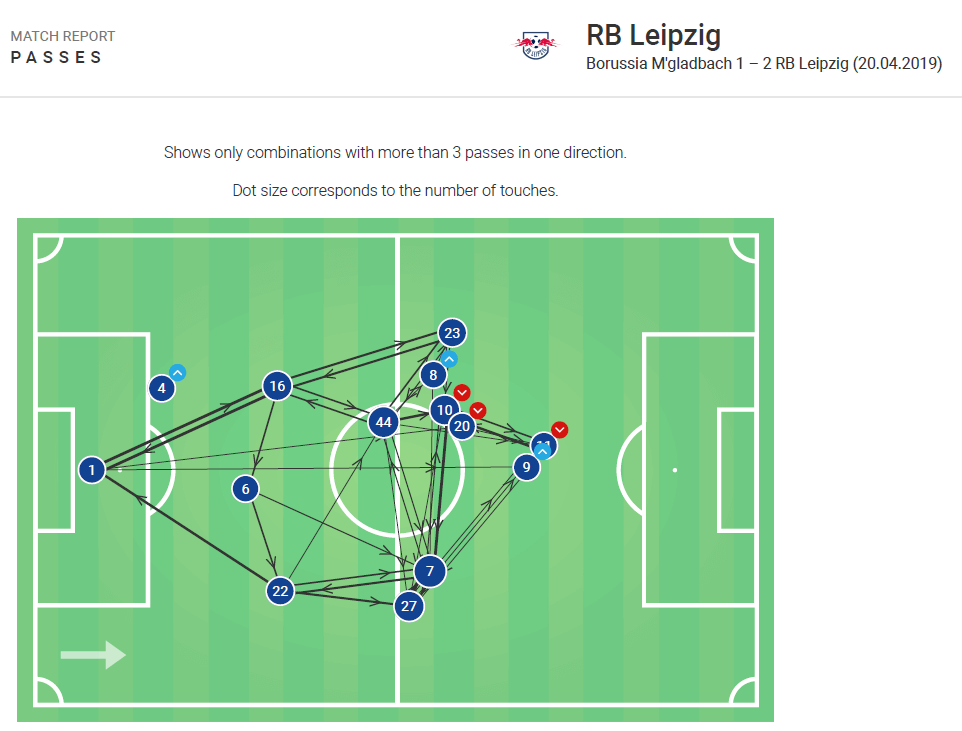 After Halstenberg had scored a second goal for RB Leipzig in the 53rd minute, Borussia Monchengladbach were able to claw a goal back in the 61st minute. The goal came about after some sloppy midfield play by RB Leipzig, which allowed Gladbach to recover the ball high up the pitch and play a first-time pass in behind Leipzig’s back line. Alassane Pléa was able to slot the ball home.

With the score at 2-1, Gladbach still struggled to create clear chances. It wasn’t until the 80th minute, when Oscar Wendt came in for Raffael, that they were able to present a more consistent threat. Wendt moved to left wing-back, allowing Thorgan Hazard to play up top with Pléa. As Gladbach’s most dangerous attacker throughout the match, this put him into a more central position. Hazard had a shot that required an excellent save by Peter Gulácsi.

The change to playing Hazard more centrally made Borussia Monchengladbach a more dangerous attacking threat, but unfortunately, it was enacted too late to change the outcome. The defensive compactness and organisation of RB Leipzig was the highlight of this match, reducing Dieter Hecking’s side to playing rather hopeless long diagonal passes. The backline of Leipzig had no problems dealing with this throughout the match.

With such an effective defensive base, RB Leipzig were able to counter-attack quickly through the wide areas. Forsberg and Sabitzer both did an excellent job drifting into the half-spaces to create the overloads necessary to cut through Gladbach’s defence. This result almost ensures that Leipzig will be playing Champions League football next season under new manager Julian Nagelsmann. Meanwhile, Borussia Monchengladbach will need to recover to have a chance at Europa League football.