In their first game since it was announced that Marco Rose would be taking over as manager next season, Gladbach strolled to victory against Hannover in the Bundesliga. Gladbach controlled the game and should have scored more, but overall will be pleased with their performance and the result which saw them close their gap to a point within Frankfurt and the Champions League places.

In this tactical analysis, I will show you how Gladbach picked apart Hannover and why Rose will have been impressed with Gladbach’s central midfield players in the game.

Gladbach, seemingly confident in their ability to overpower Hannover, opted to play a 3-4-1-2, with the wingers often staying as wingers and tracking back very little, instead allowing central players to track back. The home side played a 4-2-3-1 where again, the wingers were ill-disciplined and tracked back little, which conceded space for Herrmann and Hazard to attack into. 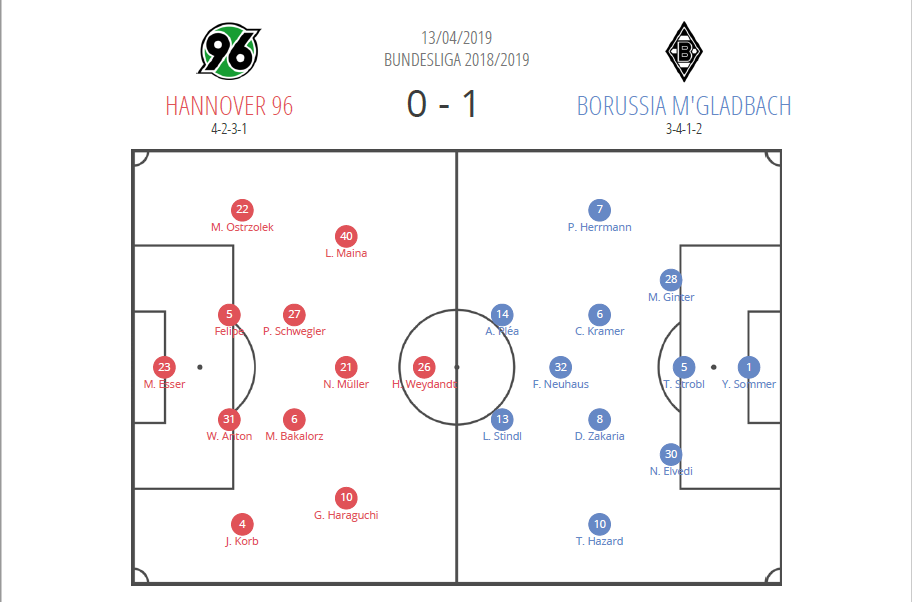 A key aspect of Gladbach’s build-up was both wingers remaining high and wide, in order to create space in the middle of the pitch. Due to Hannover’s wingers’ insistence on pressing Gladbach’s backline, both wingers had space to receive the ball in. We can see below an example of Gladbach using their two wingers for width. 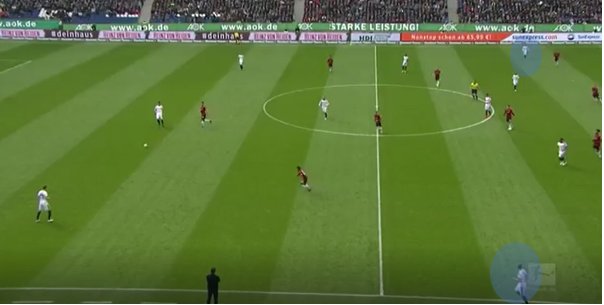 This width allowed Gladbach’s key players to really shine. Florian Neuhaus was allowed more freedom in his slightly more advanced role while Zakaria and Kramer sat deeper and looked to break Hannover down.

As said above, with the width provided by their wingers Gladbach were able to find space centrally. With Neuhaus given little defensive responsibility, he was able to drop into pockets and receive the ball. We can see this below where Neuhaus drops into an area surrounded by six Hannover players, where he can then turn and play into the forward players or wingers.

Again below we can see another example of Neuhaus dropping between the lines and causing Hannover problems, as he is not only dropping between the lines but also being given the space to turn. If Neuhaus had succeeded, Gladbach could have potentially created a 4v4 against Hannover’s defence. Through using this in the first half, Gladbach should have scored on more than one occasion.

Hannover’s structure and decision making off the ball also helped Gladbach to find space and break them down. Here we can see Hannover not fully committing to the press, and so when the midfield player steps out needlessly to press, large spaces are left in behind for Gladbach to easily exploit.

If the home team had opted to sit deeper, they would have found it much easier to remain compact, and Gladbach’s holding midfielders may have struggled to create space. 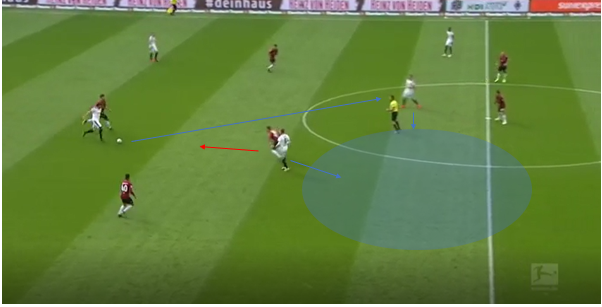 Instead, Hannover opted to try and press Gladbach’s backline various times, with each press unsuccessful due to the lack of coordination involved. In the example below, Hannover’s initial press is open, with Zakaria having passing lanes either side of him. However, with some recovery runs Hannover can close these passing lanes.

The problem came with Hannover not having another wave of press, in that the rest of Hannover’s team is nowhere near and not involved in the press. Simple chipped passes over the press resulted in Gladbach’s midfield being in vast areas of space to advance up the pitch.

The roles of Zakaria and Kramer

As mentioned, both Zakaria and Kramer’s holding midfield roles allowed for Neuhaus to play with more freedom both in and out of possession. Both players worked well together and coordinated themselves during defensive transitions or attacking phases of play.

One player would always sit deeper and be in a position to counter press or cut passing lanes to Hannover’s attackers. In this example below, Zakaria is sitting deeper and cuts the passing lane to Hannover’s striker, intercepting the ball and preventing a harmful counter-attack. 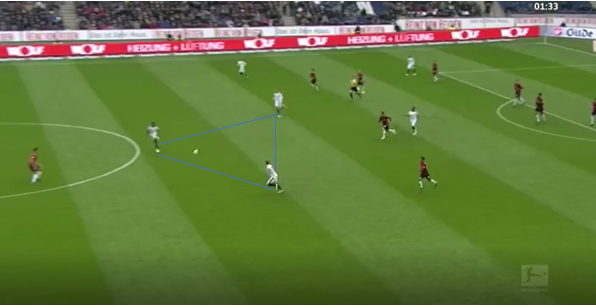 In another example below, we can see that Zakaria loses the ball in an attack, but Kramer counter presses quickly to win the ball back. This coordination between the pair allowed for Gladbach to commit more men forward in attack. With one of the pair joining the attacks, Gladbach could create overloads that led to goalscoring opportunities.

Overall, Gladbach put in an assured, controlled performance which will encourage new boss Marco Rose. Gladbach’s relatively youthful midfield dominated the game albeit against a poor Hannover side. Had Gladbach finished their early chances, the game could have been out of sight much more quickly.