How did Atlético Madrid overcome their stage fright against Celta Vigo?

Following a 2-0 loss away to Barcelona the previous week, Atlético Madrid went into this encounter eager to return to winning ways. Their failure to close the gap on the league leaders meant that any hopes of mounting a late bid for the title were dwindling.

The visitors to the Wanda Metropolitana on Saturday, Celta Vigo, had most recently earned victory against Real Sociedad, where heroic striker Iago Aspas once again proved to be the catalyst in their attempts to avoid relegation.

Despite bettering their hosts’ xG rating, Celta failed to score on the day, and ran out 2-0 losers thanks to goals from Antoine Griezmann and Álvaro Morata. This analysis will pin-point where Fran Escriba’s men came up short, as well as shining a light on Atleti’s tried and trusted strategies.

With a number of key players out injured or suspended for this game, Diego Simeone was forced to select an inexperienced central defensive pairing of Fransisco Montero and Toni Moya. The youngsters were flanked, however, by veteran full-backs Felipe Luís and Juanfran.

Thomas Partey’s absence meant that Saúl Ñíguez could play in his preferred role at the heart of the midfield, while Vitolo took up a wide berth on the left. Ángel Correa joined Griezmann up front. 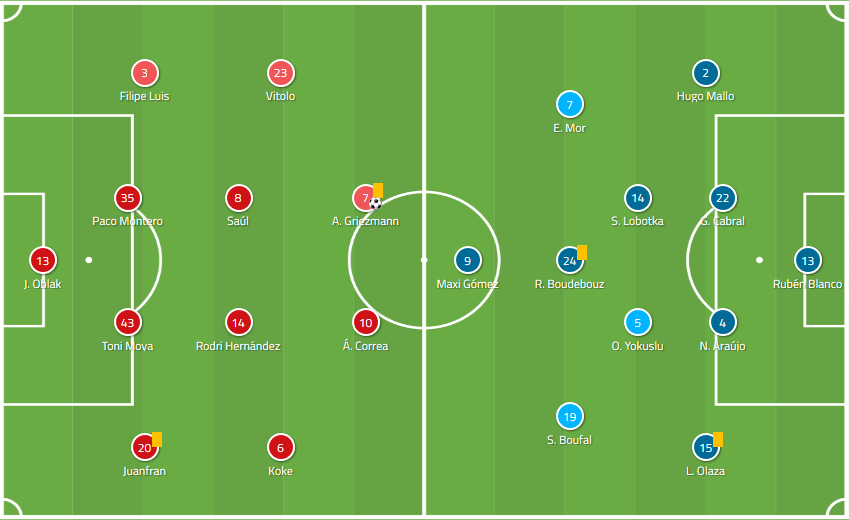 Having earned his fifth yellow card of the season last week thanks to a goal celebration, Aspas was suspended for this fixture. Maxi Gómez was supported by Ryad Boudebouz, Sofiane Boufal, and Emre Mor. Meanwhile, dynamic midfielder Stanislav Lobotka partnered Okay Yokoslu at the base of midfield.

Right from the off, Celta were intent on building their attacks patiently out from the back. Atlético often made it difficult for their opponents to do so, however, applying pressure during the first and second phases of Vigo’s attacks.

The image below shows an instance whereby the home team press from the front, forcing Rubén Blanco into a misplace lofted pass. Right-sided striker Correa blocks off two short passing options with his angle of approach, while pushing Blanco into a hurried pass. 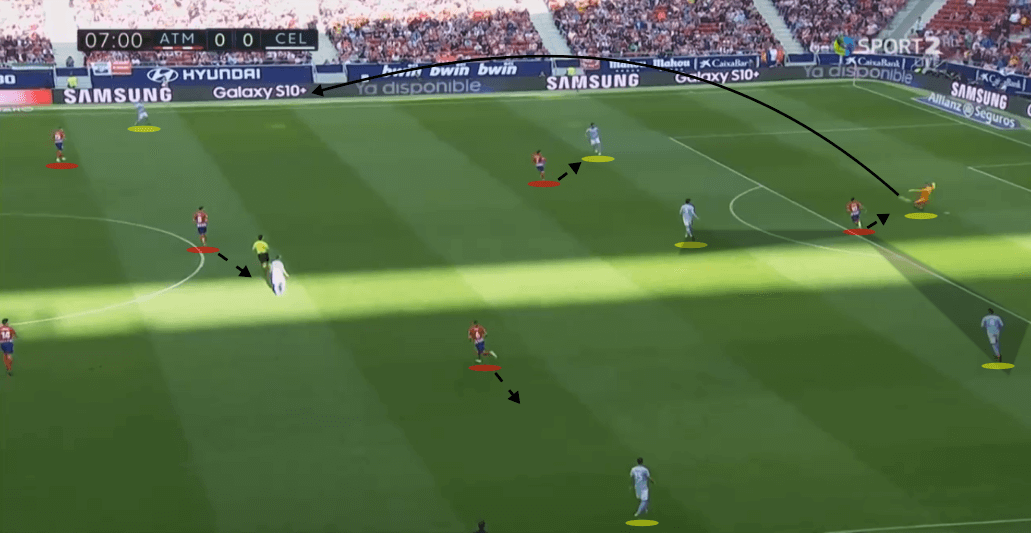 Atlético didn’t always press high, instead sometimes allowing the visiting defenders to receive possession, before guiding them into congested space or forcing them against the touchlines out wide. From here they could close out the space surrounding the ball carrier and force a turnover in the opponent’s half.

The image below illustrates an example of this. Winger Boufal has dropped deeper to aid progression out of Celta’s half. As soon as he receives the ball, the Morrocon international is pressed from all angles. With his passing lanes cut-off, Boufal loses possession, allowing Atlético to transition to attack quickly. 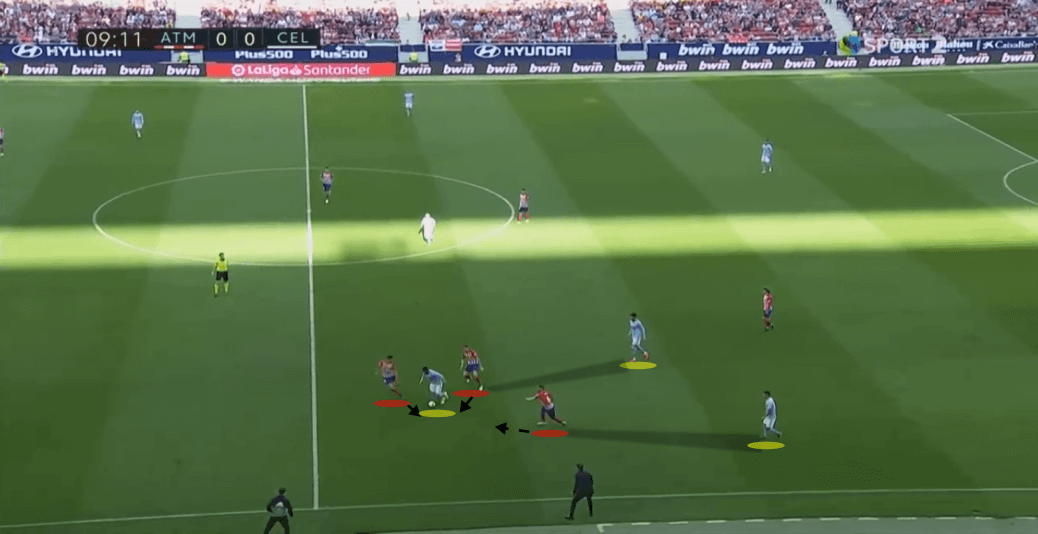 The above images are representative of a lot of what we saw during the early exchanges in Madrid, with Atlético often preventing Celta from building anything sustainable.

However, as the half went on the away side grew more confident in possession, and were able to pass their way through the thirds on a number of occasions. With one and two touch passing, mostly focusing on linking play down the sides, Celta managed to progress into the final third before combining to create chances.

The first image below shows an instance where Boufal was able to cut infield and play a one-two with Ryad Boudebouz on the edge of the penalty area. Boufal receives the return pass inside the box, before his curling shot is saved well by Jan Oblak. 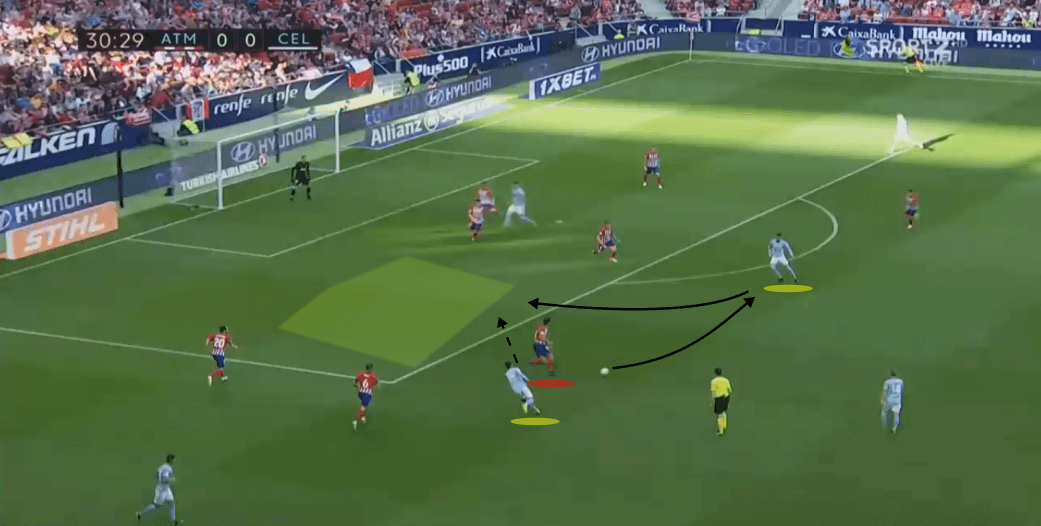 As is so often the case, Atlético’s opposition looked to exploit any moment of slight disorganisation with rapid counter-attacks. These opportunities mainly came from set-pieces, and Celta keeper Blanco was always ready to distribute quickly to take advantage of the brief existence of space in Atleti’s half.

The image below shows the aftermath of an Atlético corner, with Vigo breaking fast to exploit the space. Again through Boufal, the visitors forge an opening and force a great save from Oblak, after Boufal’s initial effort deflected into the path of Maxi Gómez six yards from goal. 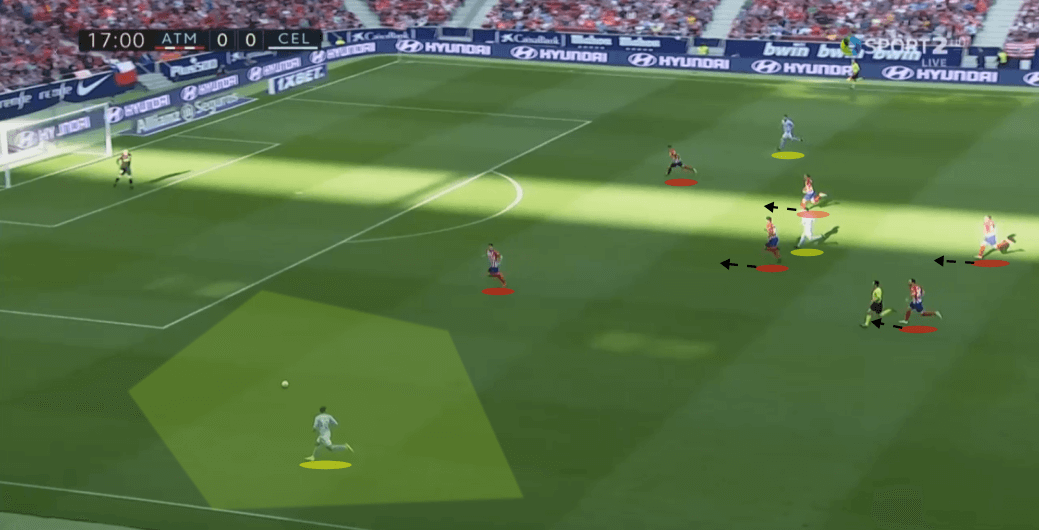 While there were many occasions in which Atlético managed to stifle Celta’s build-up play with pressure in the first and second phase, the away team did succeed in creating some quality opportunities.

Sharp combinations and the alertness to try and capitalise on the extra space during Atleti’s defensive transitions saw Fran Escriba’s side record 10 shots on goal. Three of those efforts were on target, with two in particular forcing excellent saves from Oblak. Vigo’s xG came in at 1.5, but the Slovenian shot-stopper was in fine form to ensure a clean sheet.

For much of the first half, Atlético were forced to propose the attack and dictate the game with possession. They didn’t look particularly comfortable in this role, however, and their attacking play was somewhat disjointed.

Their positional play in the final third lacked structure, and their movement often lacked clear ideas. In the image below, Juanfran plays a pass in behind Celta’s back-line, but Correa’s run is called offside.

As Juanfran played the final ball, Griezmann could be seen moving straight towards him, congesting and confusing the play, rather than offering another option elsewhere. Atlético’s attacks regularly broke down due to a lack of collective understanding. 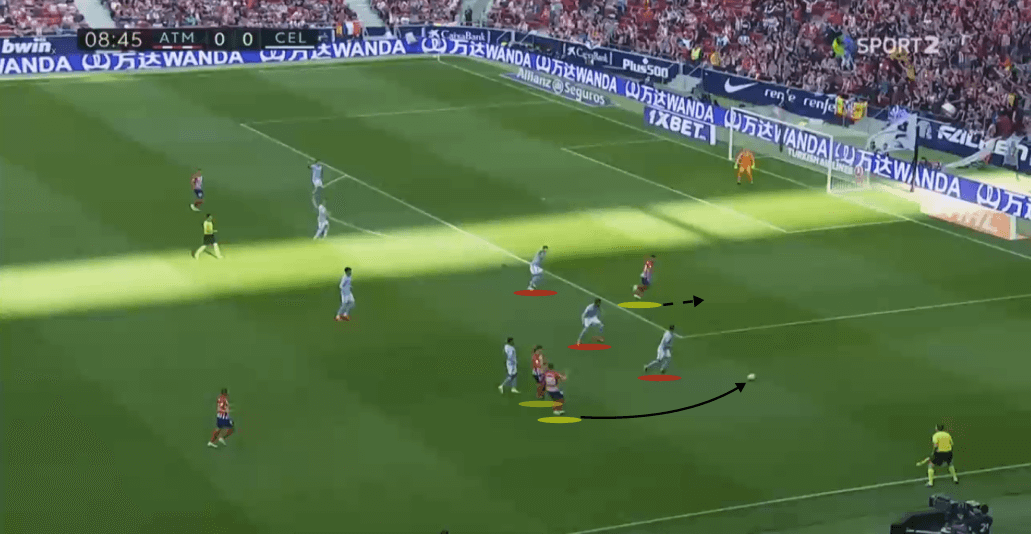 Further to their poor positional play and movement patterns in attack, Atlético’s final pass was also frequently sloppy and badly timed. This contributed to a number of failed attacks, after they had at least managed to find space to receive in dangerous areas.

The image below shows an over-hit pass in behind from Griezmann. The Frenchman had taken possession between the lines due to Celta’s weak midfield spacing, but his final ball ran out of play before Correa could get to it. 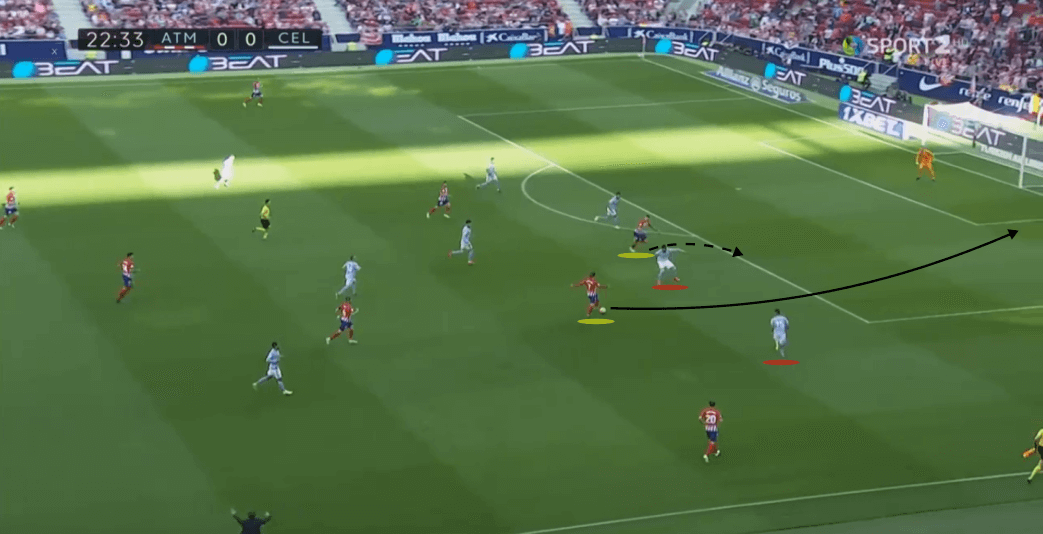 Often with few or poor options to pass to in the final third, Griezmann also elected to shoot from range on a number of occasions. In the image below, large amounts of space exist down the sides, space that might have been exploited with late runners from deep. However, no quality support arrives, and Griezmann chooses to shoot from range, missing the target comfortably. 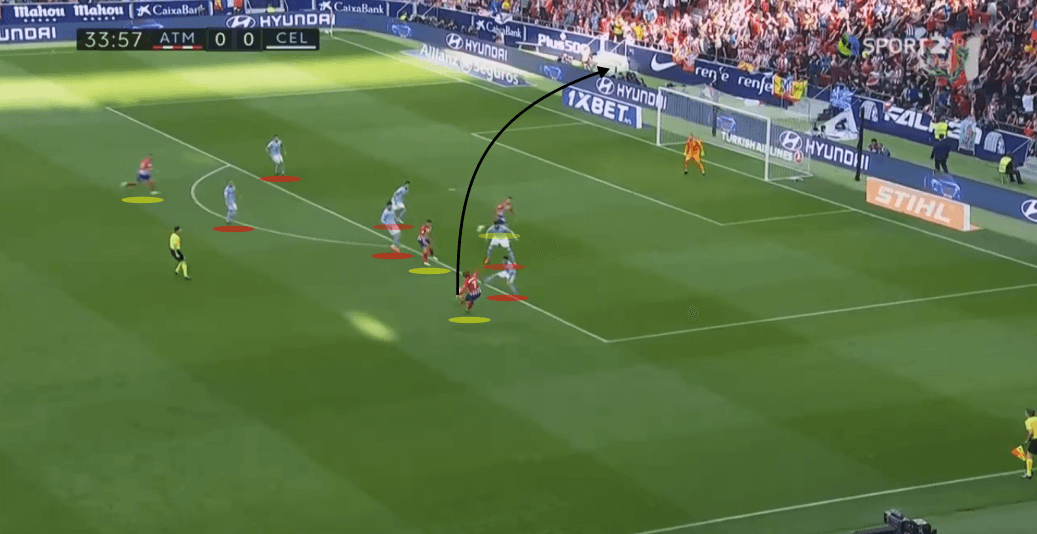 Despite enjoying more of the possession in this game, Atlético were often wasteful with the ball. There was a lack of structure during the established attacking phases, and a lack of clarity or understanding between the home side’s forwards.

Over the course of the 90 minutes, Simeone’s men were able to register 11 shots on goal, with five of them finding the target. However, their expected goals totalled at 1.34, less than the visitors’ 1.5.

Thanks to a Griezmann free kick in the 42nd minute, Atlético went into the second half with something to protect, a welcome return to what they do best.

Atlético return to their strengths

Following Griezmann’s goal, Atlético dropped deep to defend in a compact 4-4-2 block for much of the second half. Celta had little choice but to play a high line and commit numbers forward.

This game state suited the home side perfectly. The image below shows Atleti camped deep in their own half, forming a compact unit in front of the 18-yard line. Vigo look to stretch the play with the full-backs holding their width. 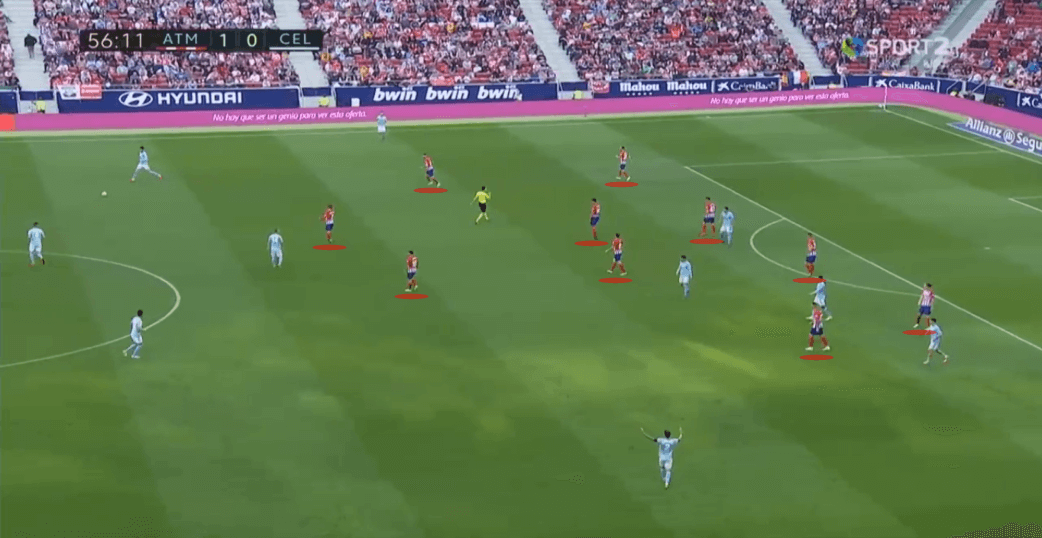 Atlético aimed to prevent any progressions through the middle with narrow spacing, instead forcing the away side into wide areas. From here, they could close out the space against the touchline and hope to stop the cross through the defending of the near-sided full-back and wide midfielder.

The instance below shows Celta Vigo succeeding in delivering a cross to the box, but as you can see, their opponents are well placed to clear the danger with vast superiority in numbers. 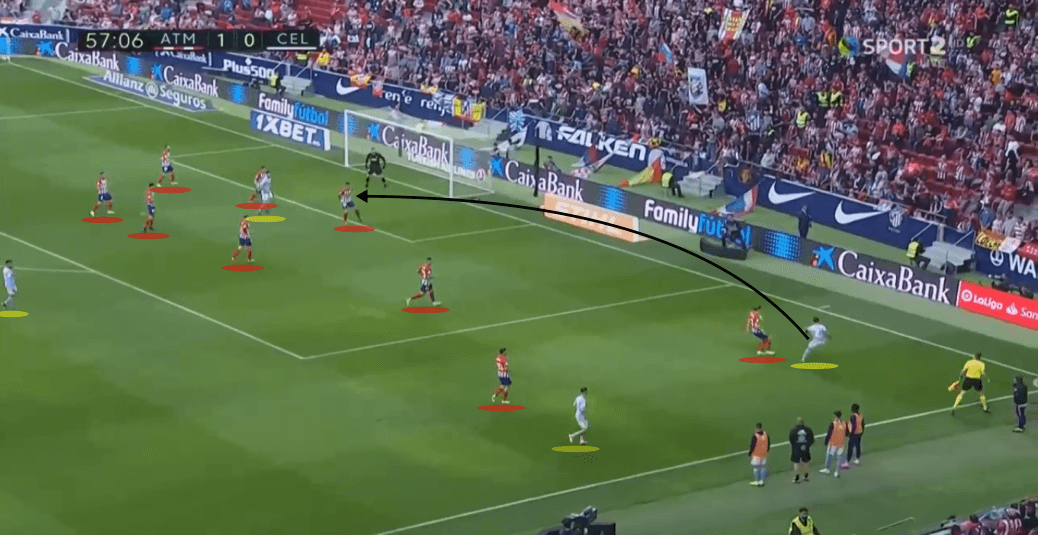 With the clock ticking, Celta pushed more men forward and progressed their defensive line further into Atlético’s half. This left the other half of the field wide open for Los Rojiblancos to take advantage of during attacking transitions.

The image below shows this, with Griezmann playing Morata through from within his own half. The former Chelsea striker carries the ball towards goal, before rounding the keeper and clinching the win for his team. Shortly afterwards, Griezmann was himself played through on goal, but his dinked effort failed to find the back of the net. 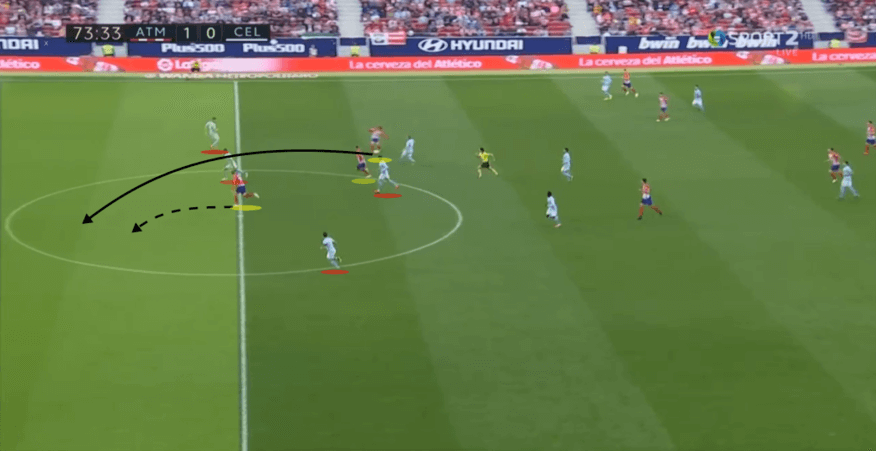 Griezmann’s free kick allowed Atleti to sit off and protect a lead, a strategy that suited them far more than trying to dictate the play had done earlier on. Celta gradually poured more men forward in search of an equaliser, leaving space in their own half for Morata and Griezmann to exploit on the break.

Despite Celta Vigo arguably having the more clear-cut chances, Atlético stole all three points thanks to a set piece and a counter-attack. The win keeps them second, nine points off Barcelona in top spot.

Celta lie in 17th pace, just one point above the drop zone after Villarreal’s victory over Girona. Fran Escriba’s arrival as new manager just over a month ago has seen some improvement in terms of results.

However, since the start of last season, Vigo have won just once in the league without Iago Aspas. Simply put, their survival depends on whether or not the former Liverpool attacker can stay fit for the remaining six games of the campaign.