After such a huge game at Old Trafford mere days ago, going back to La Liga action felt like going downhill a bit. As much as the Spanish domestic competition has been fierce this season, the bumpy road is coming to its end as Barcelona need a total of nine points in the remaining six games in order to claim another crown and reclaim the throne for their own.

Huesca were first in line of La Liga’s resistance movement as Barcelona made a jump from performing in front of 76,000 people on Wednesday to roughly 7,000 on Saturday. And interestingly enough, the small team from Aragón made a fine stand and earned a point for their troubles, albeit against a heavily depleted Catalan lineup.

This tactical analysis will use statistics to determine just how things played out on Estadio El Alcoraz and how both teams settled for a draw which saw them share the spoils. 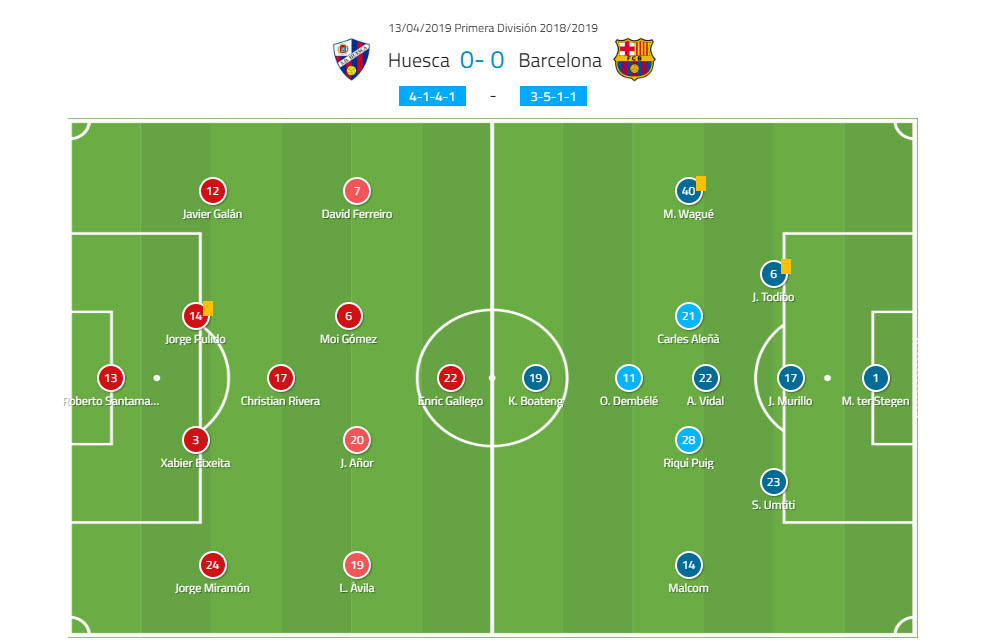 The reports from the media led us to believe Ernesto Valverde would go all out with rotations in order to keep his big guns ready for the return leg against Manchester United in the Champions League. And this is indeed what happened on Saturday night.

We saw a Barcelona lineup that did not include some of their most prominent star names. The likes of Lionel Messi and Sergio Busquets were rested while Ivan Rakitić and Sergi Roberto were left out due to injuries. Gerard Piqué and Luis Suárez were suspended due to yellow card accumulation.

This meant that a lot of the youngsters would finally get their time under the sun as Jean-Clair Todibo and Moussa Wagué got their first La Liga starts while the talented La Masia prodigy Riqui Puig and loanee Jeison Murrilo got their official debuts in the competition. As a result of so many usual first-teamers being rested, this was the youngest squad in this season of La Liga with an average age of just 24 years and 133 days. The last time they fielded such a young team was on 7 October 1995 in a big 5-1 win over Real Betis.

Barcelona opted for a rather unusual 3-5-2 formation that saw some slight adjustments throughout the game with the introduction of some more prominent names.

Francisco also shuffled his cards a bit in relation to last week’s bout with Levante which also ended in a draw, and the club from Aragon now has a total of three in a row. Even though Huesca opted for their favourite formation, the personnel saw a lot of changes.

Xabier Etxeita and Jorge Miramón were back in the starting lineup, the former after a suspension and the latter returning from an injury. Juanpi was also chosen instead of the young Yangel Herrera who remained on the bench for the whole game while David Ferreiro accompanied Gallego Enric and Ezequiel Ávila up front.

The underdogs were deployed in a 4-1-4-1 formation, their most used one this season in 25% of all the games played. The hosts remained faithful to it for the whole 90 minutes played against Barcelona.

Seeing Barcelona opt for such a young squad, and with players who have rarely (or never) played with each other was a good indication that we could see some rookie mistakes and a general lack of cohesiveness. This ended up truly being the case.

Just the formation itself is a true collector’s item when it comes to the Catalan team as Barcelona have played in a 3-5-2 system only once before this game in December last year against Levante. Even though that game ended with five goals in their opponent’s net, this time around both teams forgot their scoring boots at home.

But the system did not affect Barcelona’s inability to score as much as the sheer inexperience with it and among the players. Playing with three at the back goes against Barcelona’s most common positional patterns. Usually, the two centre-backs would be the only line of an extremely high defensive line and would play spread out as much as possible to cover the wide areas, and more importantly to allow the pivot to drop in between them.

As can be seen in the image above, Arturo Vidal had the task of being the team’s Sergio Busquets for the day as he dropped to the lavolpiana position to assist them and dictate play. But the problem was that having three centre-backs mostly made the lavolpiana role either a surplus or at the very least dampened its efficiency.

Notice in that same example how close the two Barcelona players are. They are basically in each other’s way so the team get nothing out of it, but they do practically lose a man since they have two in the same position at the same time.

Another problem this posed was the lack of connection between the defence and the midfield. The example above shows just how Huesca’s system was very well deployed to cover the middle channels. The fact that Vidal was so deep behind meant that Barcelona lost their link between the first and the second lines.

The Catalans did adjust as the game went on. They moved the Chilean from the backline quartet to play right in front of his defenders to assist in the build-up, and he was more effective in that role. Barcelona built their game from there as the midfielders fed the wings with long balls and quick switches of play.

It was also interesting to see how the flanks differed from one another. The left wing was occupied by Malcom, who played in his natural role while the right was given to the debutant, Moussa Wagué. The right-back would push high up the pitch and was extremely aggressive in his approach, which helped Barcelona in attack but also left them vulnerable going the other way.

The away team needed time to properly get going and this was visible in their inability to create significant chances or finish them, for that matter. Keeping possession came naturally to them and they dominated that aspect thoroughly but with little result to speak of.

The most dangerous situations, however, all started with their respective flanks and how well they conversed with the central players. When they properly stretched their hosts, that would suddenly leave the central figures with that much more space around the edge of the box.

Huesca, on the other hand, were ready to pounce on their insecurities.

In general, it seemed like the hosts preferred their left side to attack with a total of 41% of all of their offensive ventures going through that flank. The middle channel was also used a lot with 31% while the rest, 28%, went to the other wing.

The reason why the left was so heavily targeted is because there was a lot of space to exploit behind Moussa Wagué. Whether it was during transitions or just swapping sides quickly, Huesca seemed to get into good crossing situations when leaving the young Barcelona B player far behind them.

When we take a look at their attacking activity, especially with crosses and duels across the pitch, we immediately notice how their left side is much more active than the right. Out of 12 crosses, nine were dished out from the left (75%) and only three from the right (25%). What’s also important is that the only successful ones were also deployed from the left (33.33%)

A large quantity of offensive duels (53%) also happened on that same side of the pitch. A more in-depth graph with both the duels and the crosses can be seen in the image below.

Defensively, Huesca worked really hard to stop Barcelona from creating, and some big saves from their veteran goalkeeper made sure their net remained untouched. In the build-up itself, they positioned themselves extremely well to match Barcelona’s five in midfield.

The forwards regularly dropped deeper in a low-to-mid block to assist in the defensive duties. They focused on overcrowding the middle channels and forcing Barcelona back to recycle possession without any real potency.

This was extremely effective even without a real press as it slowed down the ball circulation immensely and it removed any real chances of getting the ball through the lines. As a result, the only real opportunities that were presented to the Catalans came from extraordinary pieces of skill or catching the opposition off guard. The image below shows Huesca’s positioning and their defensive shape.

In general, Huesca’s defence was not as compact or as narrow as teams often choose to be against Barcelona. Since the away team was often disjointed, their striker, namely Kevin-Prince Boateng, was more often than not left completely isolated and far from reach. Suárez’s replacement had a pretty quiet game with lots of individual errors and an overall performance that leaves maybe too much to be desired.

He was well marked by the opposition, but even when the wingers worked hard to stretch the opposition and give their forward some space, he lacked the touch and the technique to take advantage of it. This made Barcelona’s attacks even less threatening as a whole.

Even though Barcelona failed to secure all three points against the league’s bottom side, Ernesto Valverde’s experiment ended up being a success anyway. Not only has he rested all his major pieces for the upcoming clash in the Champions League, but he also avoided defeat, gave some youngsters valuable minutes and reached his 100th game without a loss as the Barcelona manager (out of 109 he managed so far).

There were a lot of positives to be drawn out of that game with many of the debutants showing their full quality. Some, unfortunately, did not live up to the task as much as their boss would have wanted them to, but at this stage of the campaign every point is valuable and gets them closer to their goal.

Huesca played another solid game but similar to the two games they played before this one, victory has eluded them once more. Instead of nine points that were practically theirs to take, they ended up with only three to speak of.

As for the Catalans, they will be happy to drop points as long as it means success in Europe, and at the moment, that is all they can think of. Honestly, it’s all we can either.