Some sense of revenge may now be prevalent for the United States as they defeated Sweden 0-2 in the 2019 World Cup. Manager Jill Ellis and company won the final match of the group stage. This tactical analysis will showcase how the United States did so with a technically superior advantage, despite the aggressive tactics of the opposition. 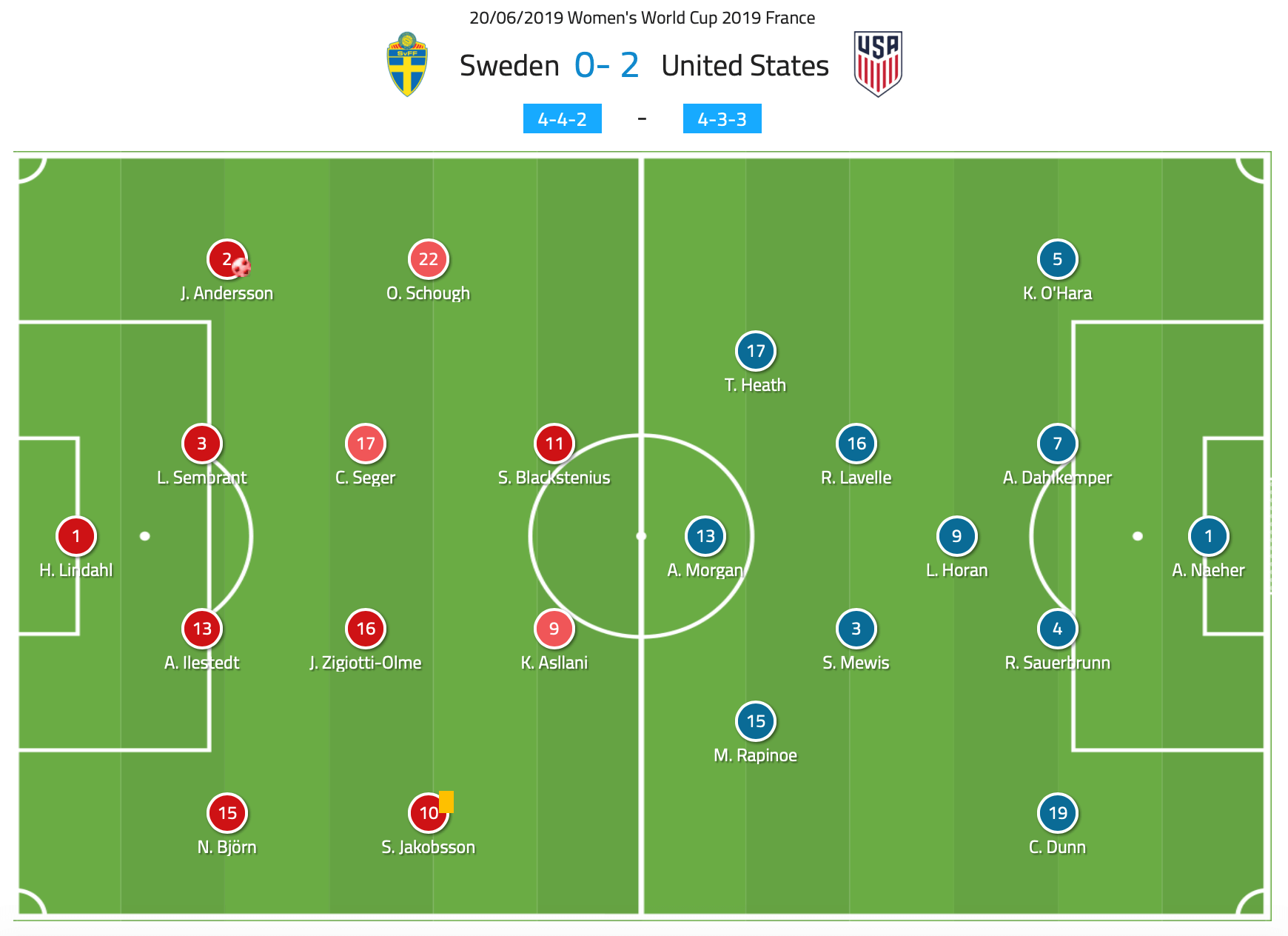 Swedish manager Peter Gerhardsson made a number of changes to his starting eleven after a 5-1 victory over Thailand in round two. Most notably, he made three changes to the back line, including choosing to sit defensive stalwart Nilla Fischer. Captain Caroline Seger retained her place in the defensive midfield, as did Kosovare Asllani. Winger Sofia Jakobsson and striker Stina Blackstenius rejoined Asllani in the attacking phase after sitting out against Thailand.

The United States meanwhile made only one personnel change compared to their starting lineup in round one: defensive midfielder Julie Ertz was held off the pitch with a minor hip injury. Ertz is a key, irreplaceable figure in Ellis’ team, and her absence was evident throughout this match. That said, Lindsey Horan did a more than respectable job in the central midfield. Full-backs Kelley O’Hara and Crystal Dunn also played vital roles in the United States’ performance, and a front three of Tobin Heath, Alex Morgan, and Megan Rapinoe rounded out the attack. Carli Lloyd and Christen Press provided fresh legs off the bench.

Both teams missing arguably their most crucial defensive player had a dramatic impact on the tactical game models in defence and in attack. With Fischer out, Sweden initially struggled to maintain any strong sense of organisation on the back line, and it showed early as the United States scored in just the third minute of the match.

The lack of communication and discipline early on from Sweden’s defence gave the opponent time on the ball.

Eventually, Sweden’s defence organised themselves in a defensive block to stifle any opposing counter-attacks. The United States had a more difficult time penetrating this shape as a result.

While Sweden’s back line began to organise themselves, Sweden’s front lines were defending successfully by utilising a number of complex pressing traps. This was Gerhardsson’s most distinct tactic.

This first phase of excellent, disciplined pressing effectively limited the Americans buildup. The next phase of the press is turning the defensive action into an attack.

Sweden’s forward-playing attackers, most notably Jakobsson, Asllani, and Blackstenius, were assigned the normally difficult task of penetrating the United States’ back line. The struggle of this undertaking was eased with the absence of Ertz. The lack of a destroyer sitting in front of the back line will often result in one of two occurrences. Either more midfielders will be held back to defend the back line, thus limiting the team’s ability to push forward in attack comfortably, or said team will simply forego any defensive compensation and instead attempt to gain advantage through a more overwhelming attack. In this match, Ellis seemed to opt for the latter. This, paired with Sweden’s high press, gave Sweden space to begin possession higher up the pitch between the back two lines. 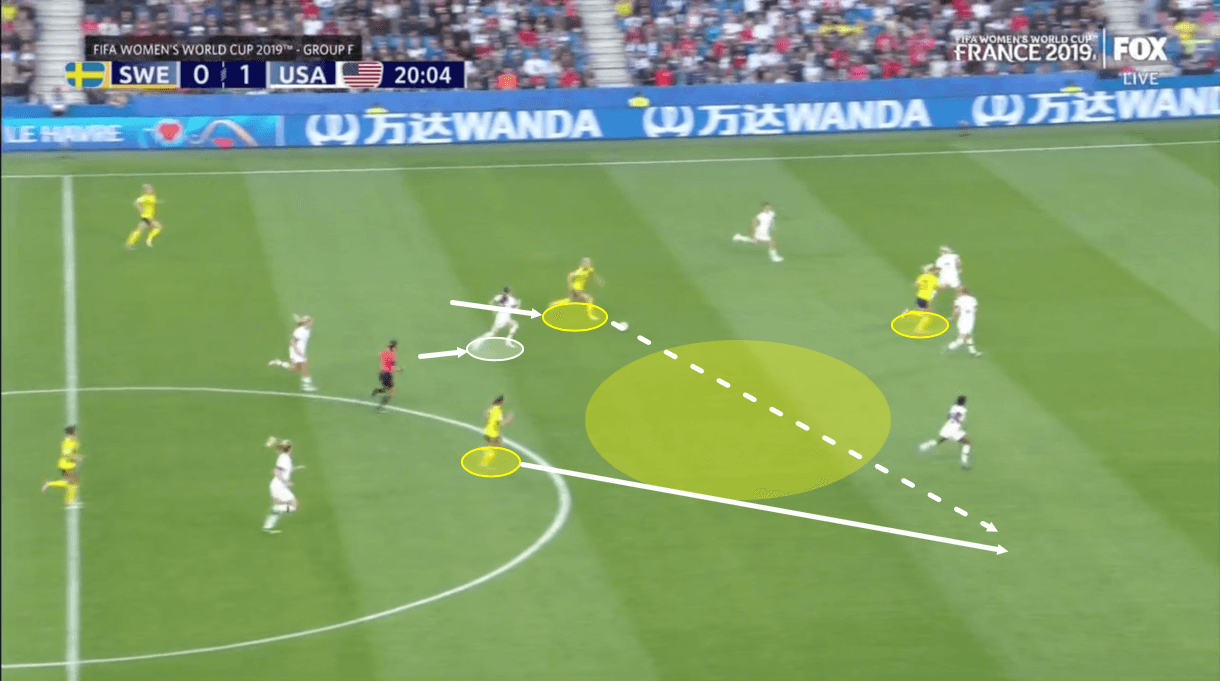 The forward positioning of the midfield three for the United States without any cover (where Ertz would normally position) for the back line gave up space for Sweden’s attack after the press to exploit.

While this press also at times gave the United States space behind the pressing lines (as shown in the previous section of this article), Sweden did have an advantage numerous moments during the match.

The United States, however, was too technically polished and physically dynamic for Sweden to get any high-quality chances against. For example, Dunn often found herself forward in attack down the left touchline, and when Sweden pressed the ball successfully, the space behind Dunn was available. However, Dunn’s speed, paired with the United States’ own organisation in defence, eventually caught up with Sweden’s attacks.

The United States eventually scored a controversial second goal even after the use of VAR, which all but affirmed their spot at the top of Group F.

These two teams were favoured as the two to advance out of the last group in the World Cup. While Sweden’s tactical versatility has been on full display this tournament, including superb pressing against the United States, it was the Stars and Stripes who became the more dominant side in the group stage.

The United States are now on a 10-match unbeaten run throughout the FIFA Women’s World Cup, dating back to the 2011 Final in which they lost on penalties to Japan. Fatefully, the last time the Americans lost in regular time to a team at the tournament was in the group stage of that edition to Sweden.

Ellis has coached her side to a level of dominance unseen at any World Cup with a record 18 goals scored in the group stage and a +18 goal differential. The record-breakers will now face Spain in the round of 16 before likely meeting up with other top-rated teams such as hosts France or Sam Kerr and Australia. Sweden will play Canada in the next round, and if history is anything to go by, it wouldn’t be the most unlikely story for these two unofficial rivals to meet again with the trophy on the line.