The opening games in group F of the FIFA Women’s World Cup have truly been different, comparing Sweden’s start to Thailand’s one. Sweden won their first game 2-0 against Chile, while Thailand suffered a devastating 0-13 loss to the USA.

For the second game, Sweden were confident to take home three points once again in order to reach the knockout stage. For Thailand, the aim was without doubt to reach a better result than in the first game and fight as long as possible against the favourite. They did reach this aim however, conceding only five goals and even scoring one.

Thailand’s coach Nuengrutai Srathongvian even said after the game that scoring a goal against a team like Sweden meant so much for his team and that their preparation paid off.

Formation-wise, both teams played as expected. Sweden coach Peter Gerhardsson once again decided to go for the 4-2-3-1 system. Thailand also played a 4-4-1-1 like in the first game against the USA, although they also changed to a 4-1-4-1-like shape from time to time. 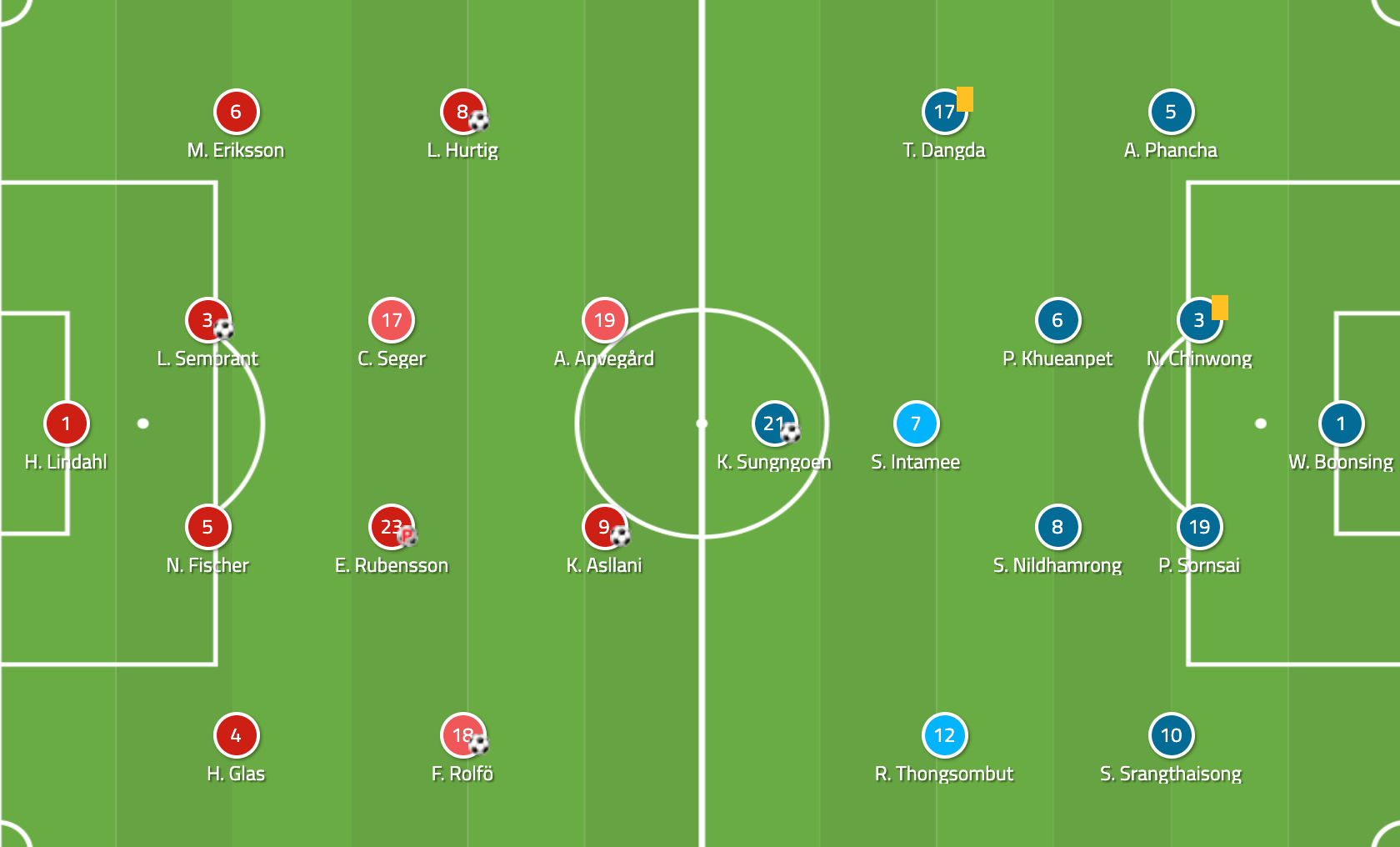 However, there were huge changes concerning the personnel for Thailand. Starting with the goalkeeper, Waraporn Boonsing replaced Sukanya Chor Charoenying. In the back line, only Sunisa Srangthaisong and Natthakarn Chinwong remained from the first game. Miranda Nild and Silawan Intamee played a more defensive role in this game, while winger Kanjana Sung-Ngoen started as central striker.

For Sweden, the only changes were Lina Hurtig for Sofia Jakobsson as well as Anna Anvegard for Stina Blackstenius.

Sweden dominate the game through possession

The figures underline Sweden’s dominance in this game. 66% possession along with 34-5 shots in favour of the Scandinavians clearly shows the way this game took shape. 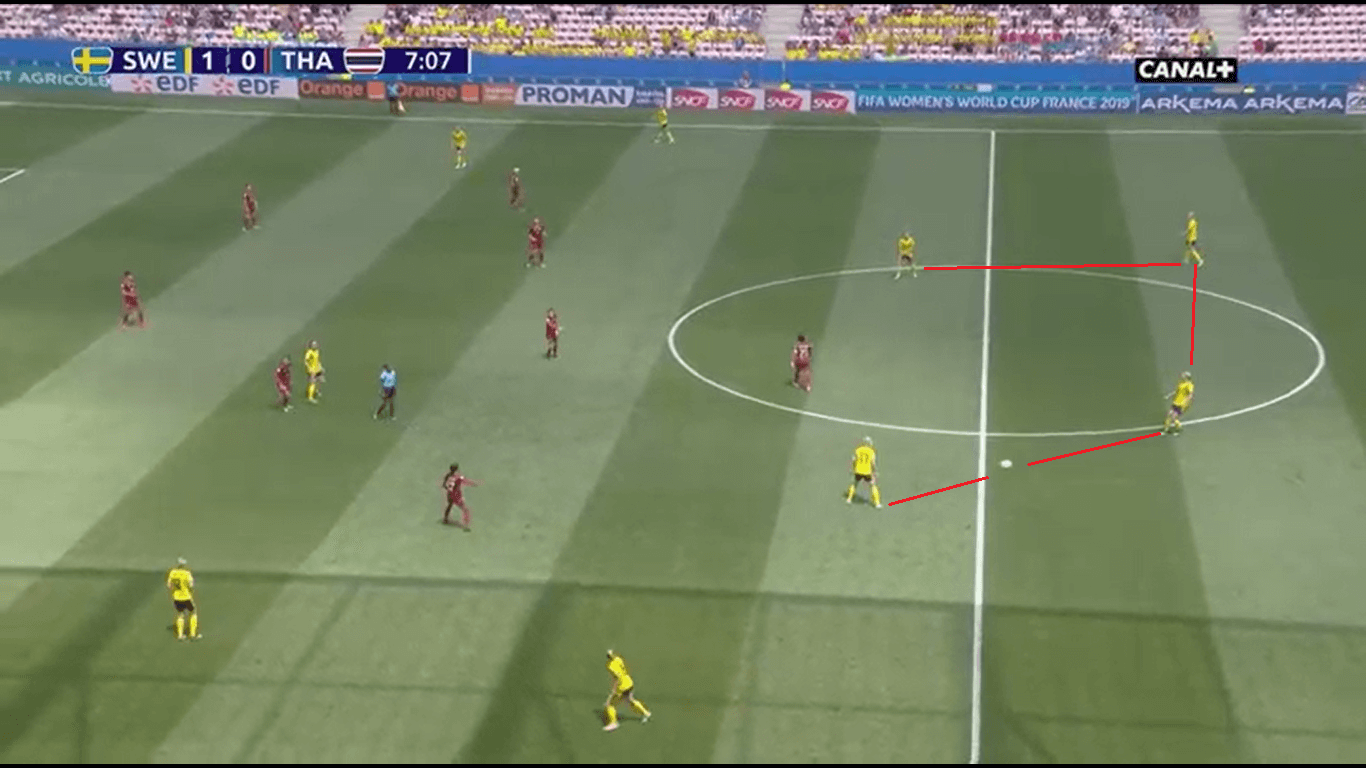 In the build-up, Sweden didn’t adapt to the opponent, but rather played the game they know. Despite Thailand staying incredibly deep, Sweden built-up with a 2-2 box. Surely, it would have made sense to position more players higher up the pitch to progress the ball. However, Sweden were rather happy with this set-up, as team-captain Caroline Seger was able to receive the ball without any pressure. From Thailand’s perspective, someone should have moved out to pressure the ball. 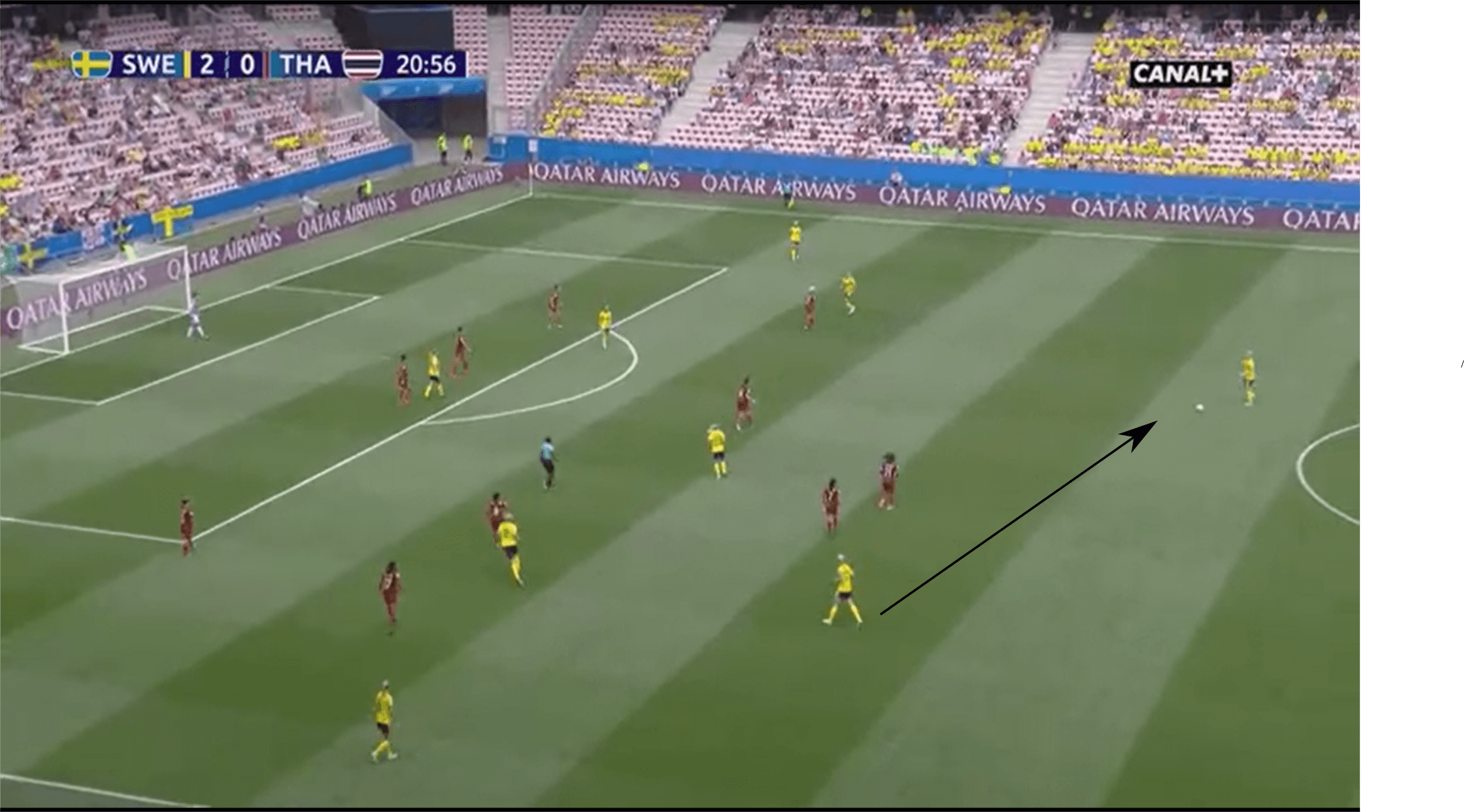 Here, Seger uses such a situation to move forward and then take out two defenders with a simple transfer of the ball to the right half space. This creates a lot of space and time for the ball handler. The overall defensive structure of Thailand is terrible, because the gaps within the lines are huge. The right-back is in no-mans-land, while the left-back has to leave the wing open. 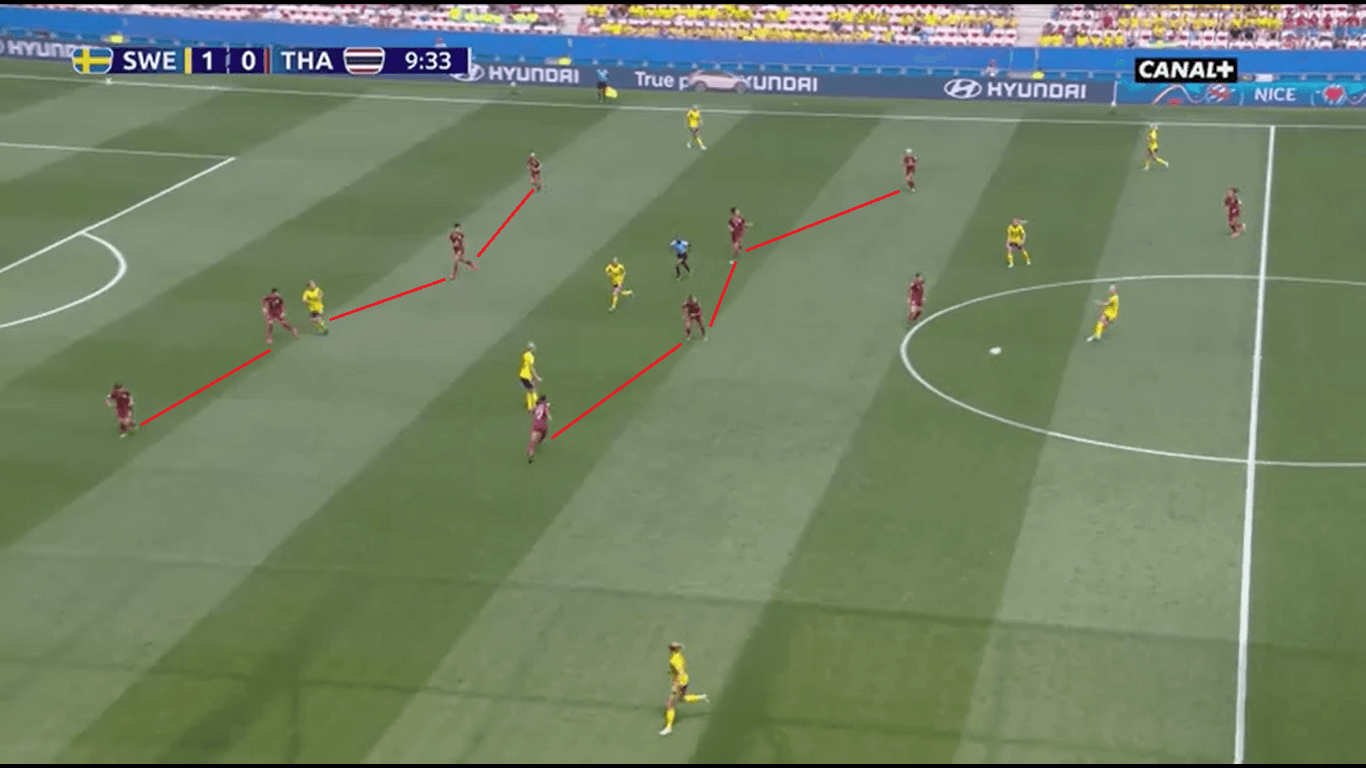 Thailand staying narrow in the centre opened up the wings for Sweden. With Seger being rather comfortable in the build-up, it wasn’t all that difficult to distribute the ball horizontally and move the opponent. Here, a simple inverted run into the space between the lines tightens Thailand’s midfield line, who try to close vertical passing lanes. As a result, the wing is wide open. 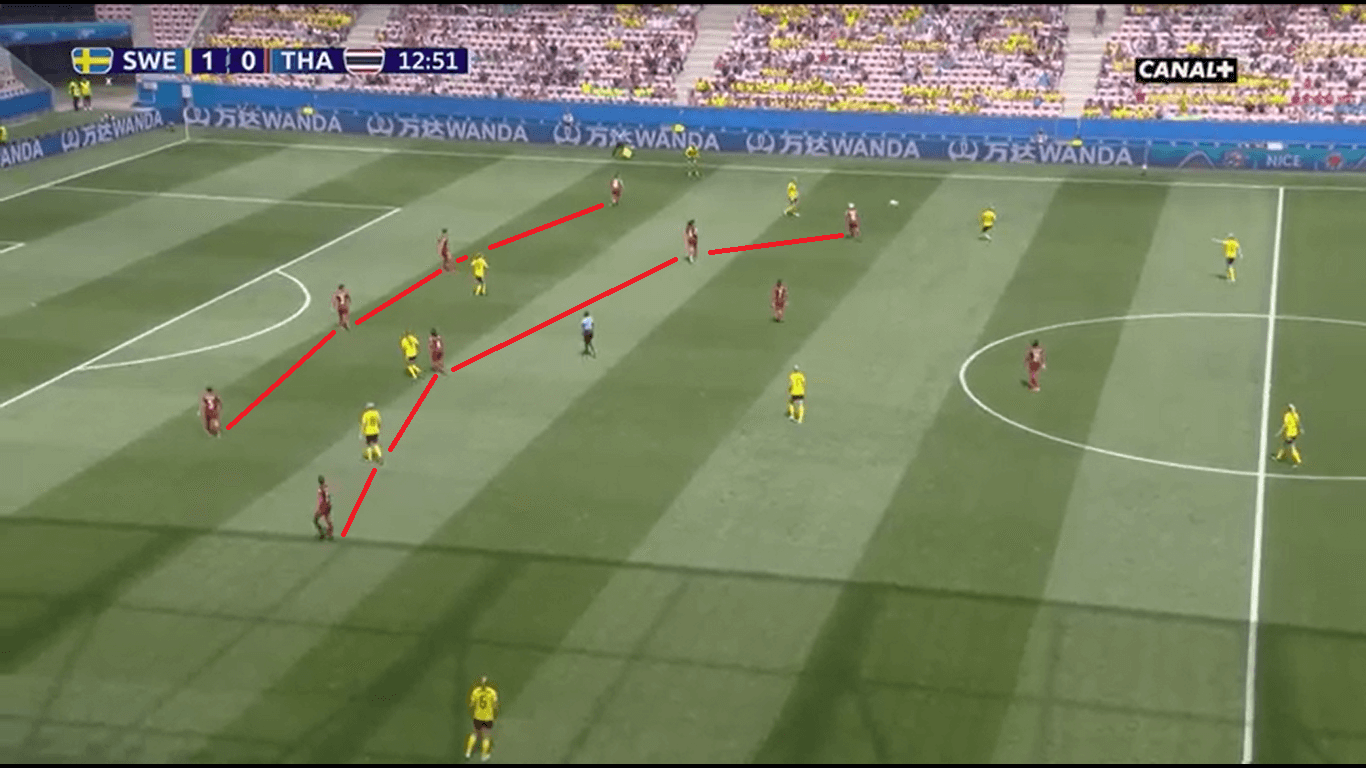 Moving the opponent increases the chance of creating gaps, as we see here. Once again the 2-2-box is used. When Sweden play the ball out to the right wing, we see that Thailand doesn’t shift properly. Especially in the midfield line, there are huge gaps, namely between the two central midfielders. Also, attacking through the wing proved to be a good idea for Sweden, as we will see later.

Space between the lines is crucial for Sweden

Even though Thailand tried to stay narrow, they weren’t truly able to close the centre. Sweden were often enough able to find the player between the lines in promising situations. 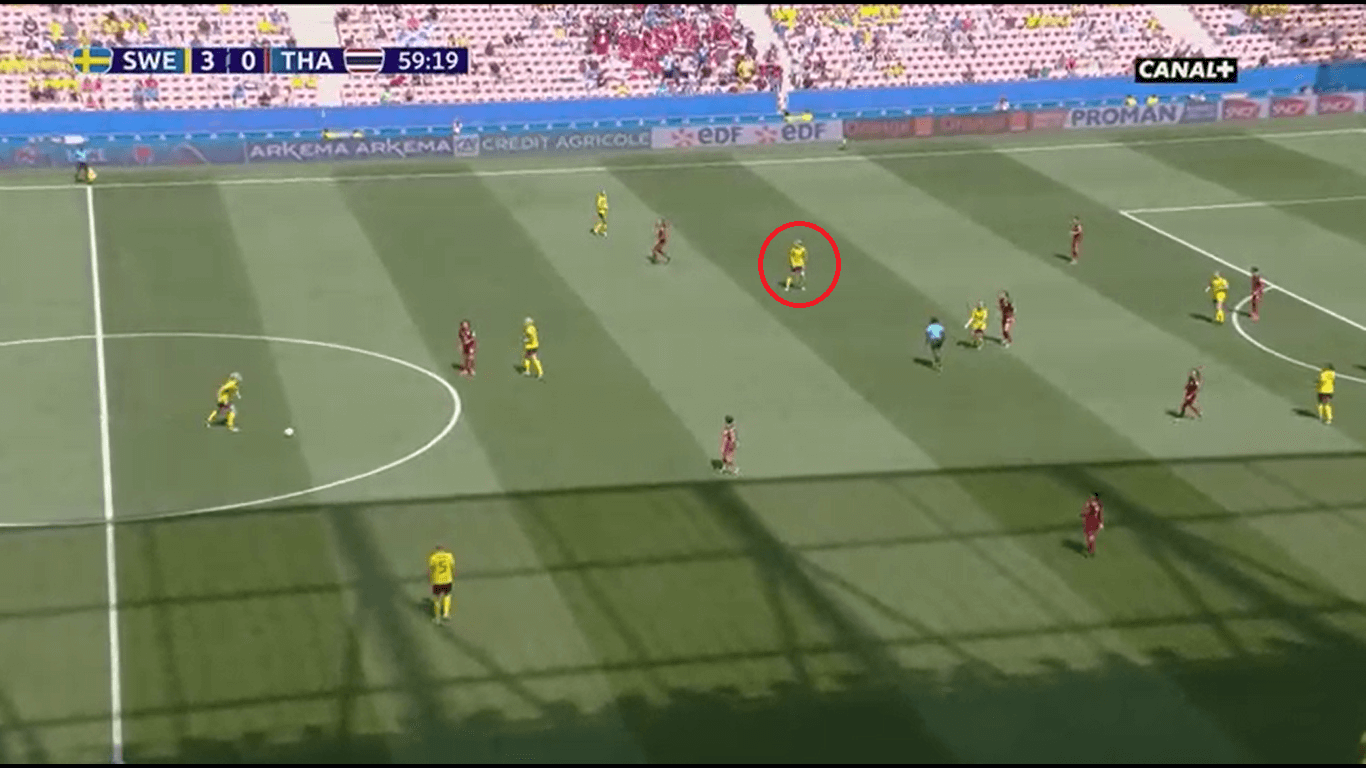 Here, once again the two players up-front aren’t able to close the passing lanes. There is no proper use of a cover shadow, which makes it rather easy for Sweden to play the ball into the dangerous are to the free player. 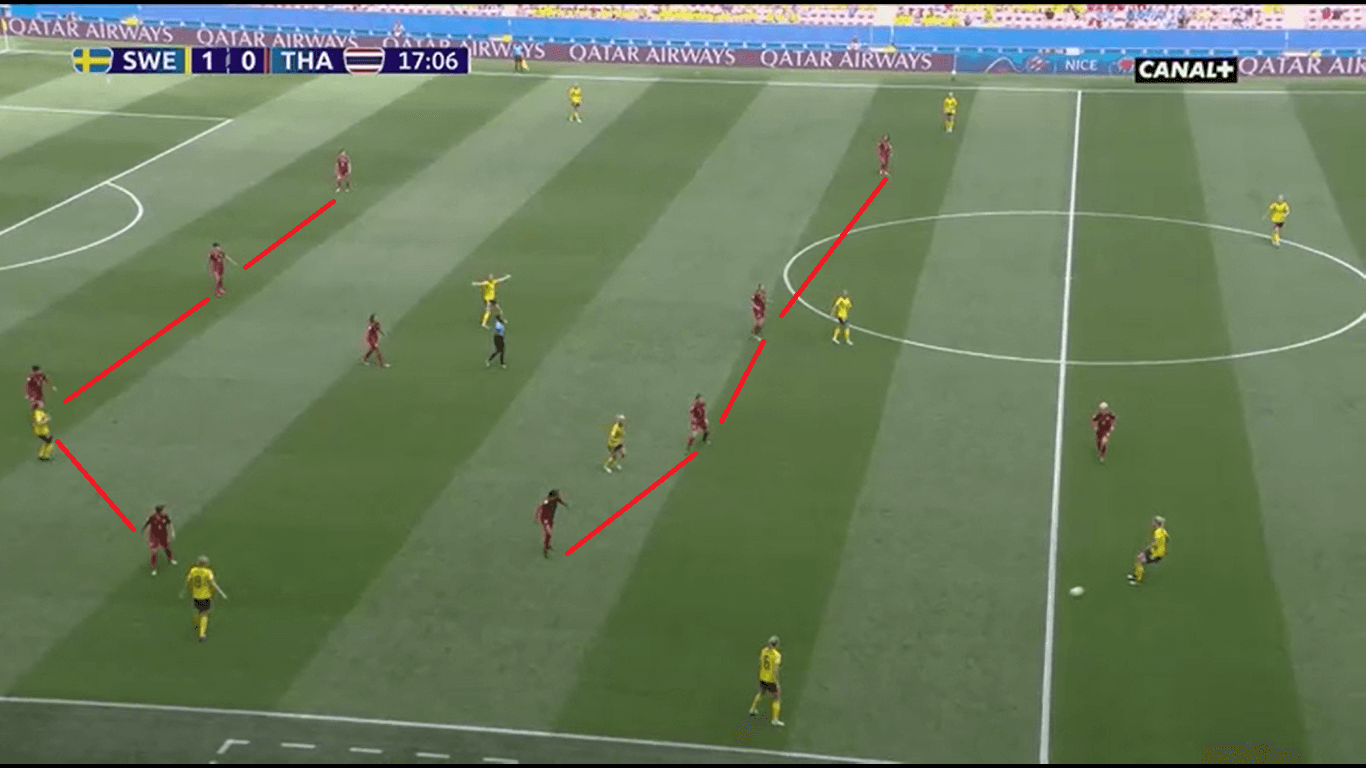 Especially when Thailand defended in a 4-1-4-1 shape, there was a lot of space between the lines to exploit. It is impossible for the defensive midfielder to cover all the space that needs to be covered. The main problem here is that the distance between both defensive lines is too high. Either the back line has to move forward, or the midfield line has to drop back. After a simple horizontal pass into the right half space, it becomes easy for Sweden to exploit that open space between the lines. 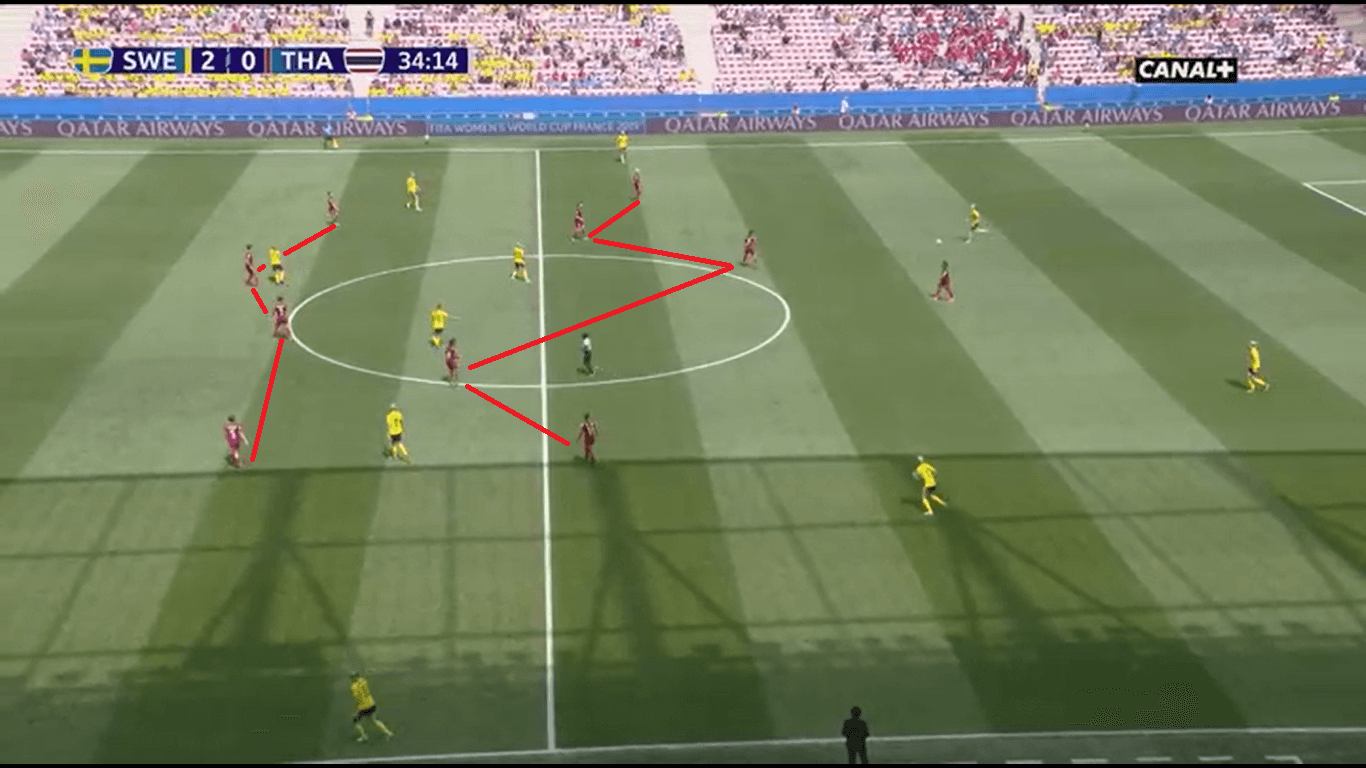 Here, we have another example of this. Sweden have even four players between the lines in this situation. Notice that Thailand’s striker isn’t interested at all in defending. Thus, the midfield line moves forward. The back line however drops back. There are so many possible passing lanes to close, that it becomes almost impossible for the midfield line to fulfil this task.

While it is easy to criticise Thailand for dropping to much back with the back line, we shouldn’t forget that they had conceded 13 goals from the USA previously. Therefore, it may be harsh to expect from them to defend more courageously. Nonetheless, defending deep caused some problems for them as well. 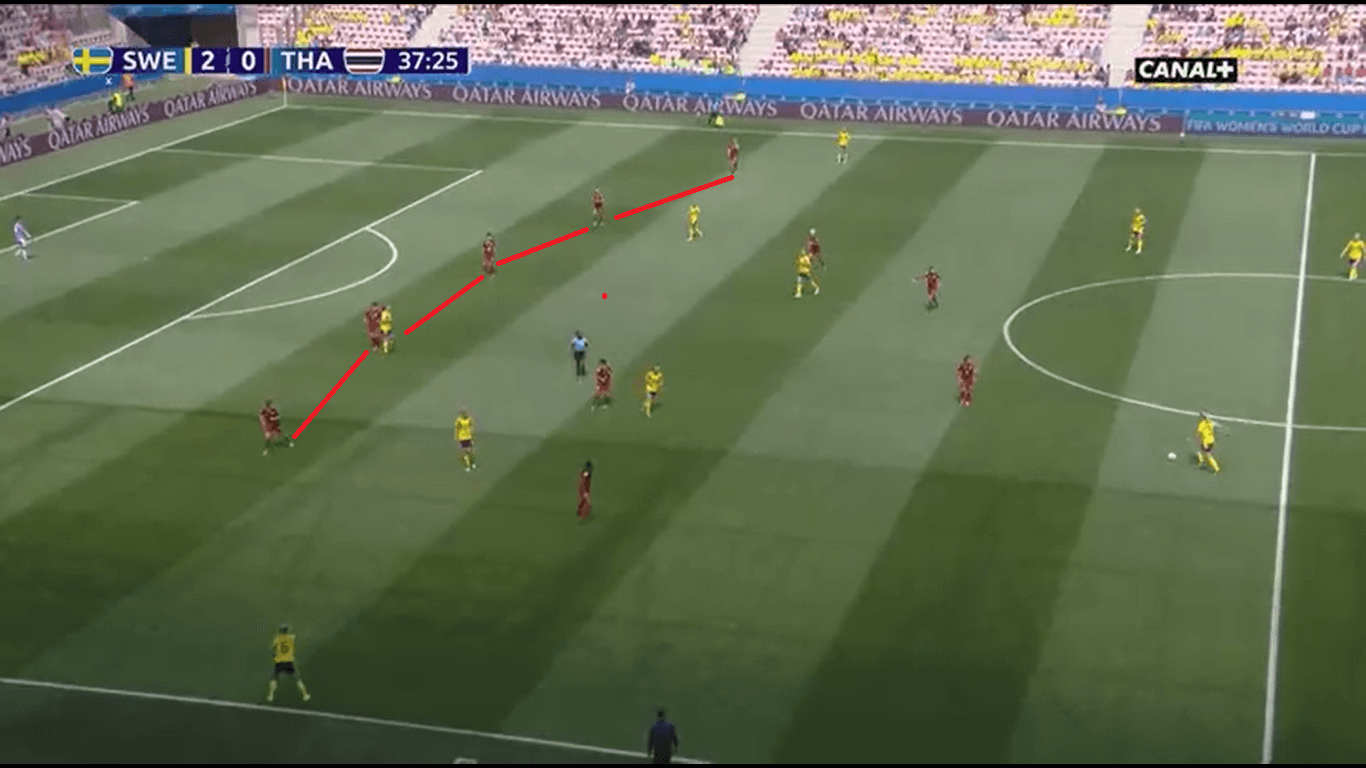 Here, they completed the back line to a back-five in order to be able to defend the whole width of the field. Once again, there is no pressure on the ball and Thailand are rather passive. While the back-five does fulfil its purpose, it leads to less access in the midfield area. There is a huge gap in the centre, but also Sweden are again able to move the ball without any pressure. 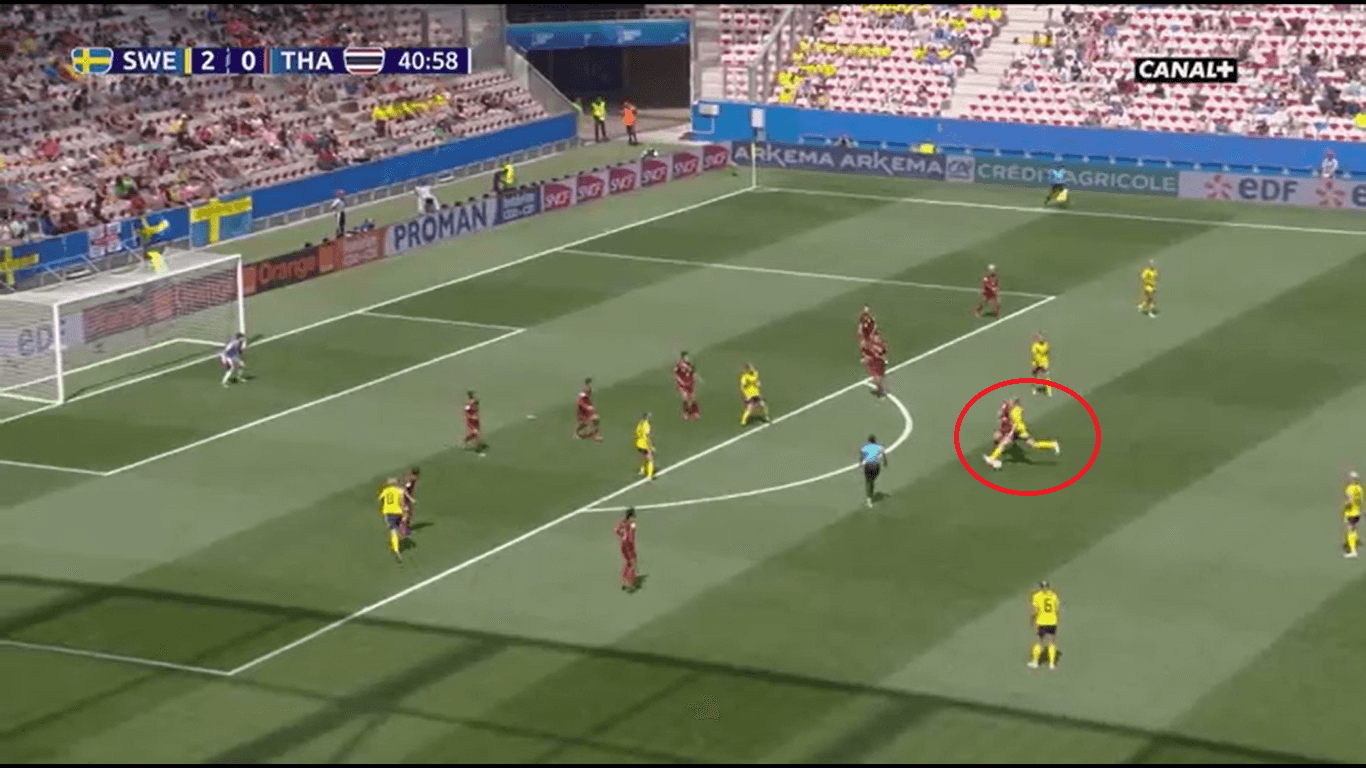 The 3-0 from Fridolina Rolfo exactly resulted from such a situation. Here, we even see some kind of a situational back-six. There is no player around the box to block Rolfo’s shoot, so she is able to score a terrific goal.

Another problem when Thailand defended deep occurred as Sweden were strong with crosses. Having remarkable physical advantages, the Scandinavians scored the first goal after a set-piece and created a lot of chances later on. 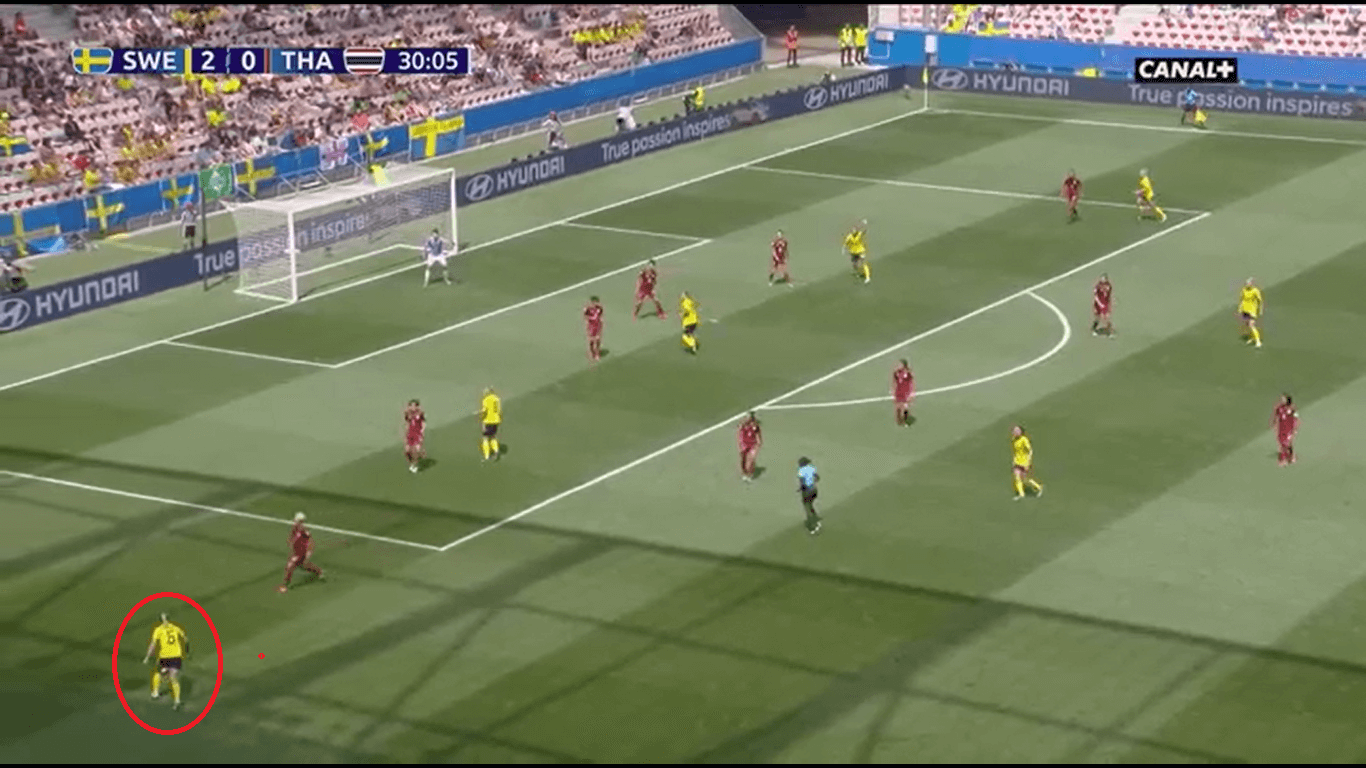 From this image, we see that Thailand does indeed a good job defending this situation. Surely, there could be more pressure on the ball with a tighter defence in order to prevent the cross, but apart from that the box is covered well. Nonetheless Sweden get a great scoring opportunity with a nice header. 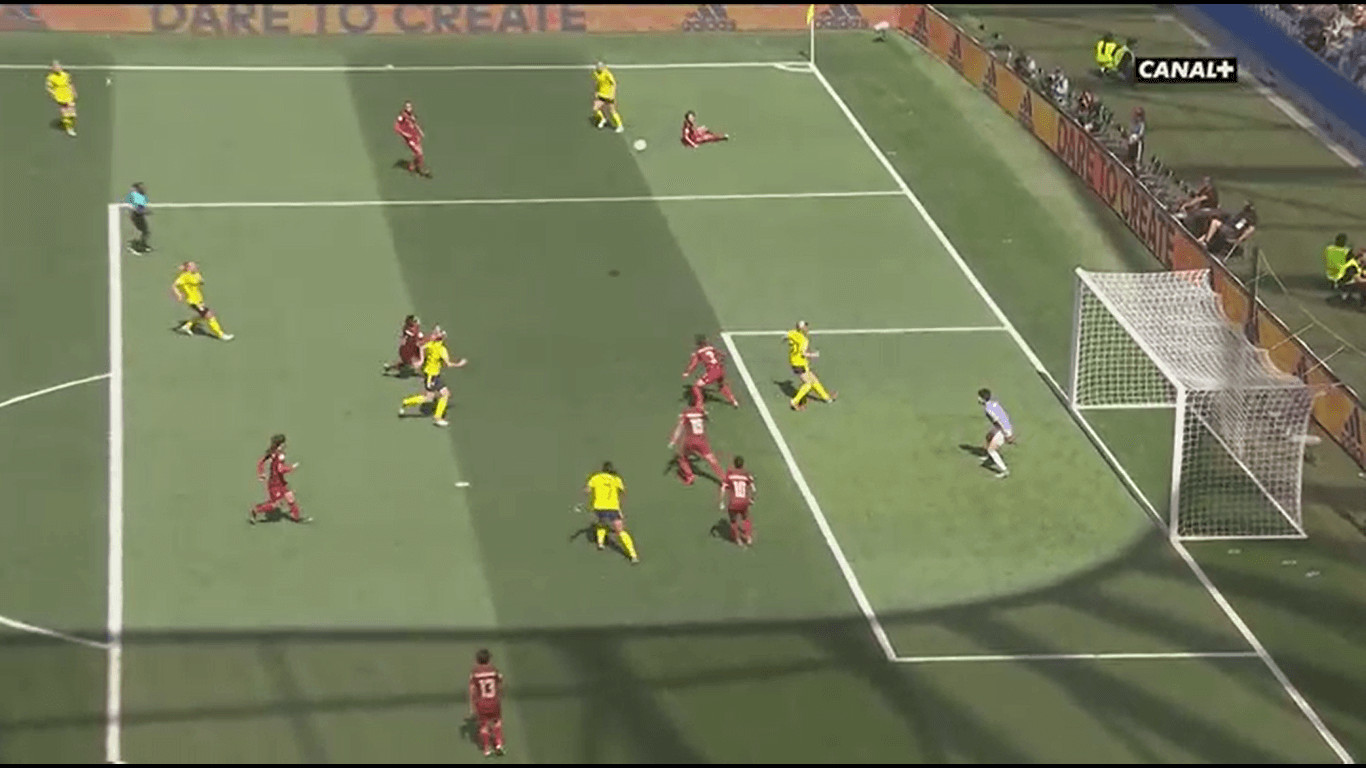 Similar things occurred in the emergence of the fourth goal. Sweden play out a two vs two situation on the wing, which is defended properly from a tactical standpoint, but lost due to a lack of quality at the highest level. The cross is fine, but near the penalty point, Thailand have a five to two superiority. Lina Hurtig wins the duel nonetheless and is able to score with a header.

Even though Sweden were dominating the game rather easily, some problems occurred as well. In previous games this year, defensive transition seemed a like a huge problem for the Scandinavians. There were some positions, where Sweden defended properly, but also some where they showed weaknesses. 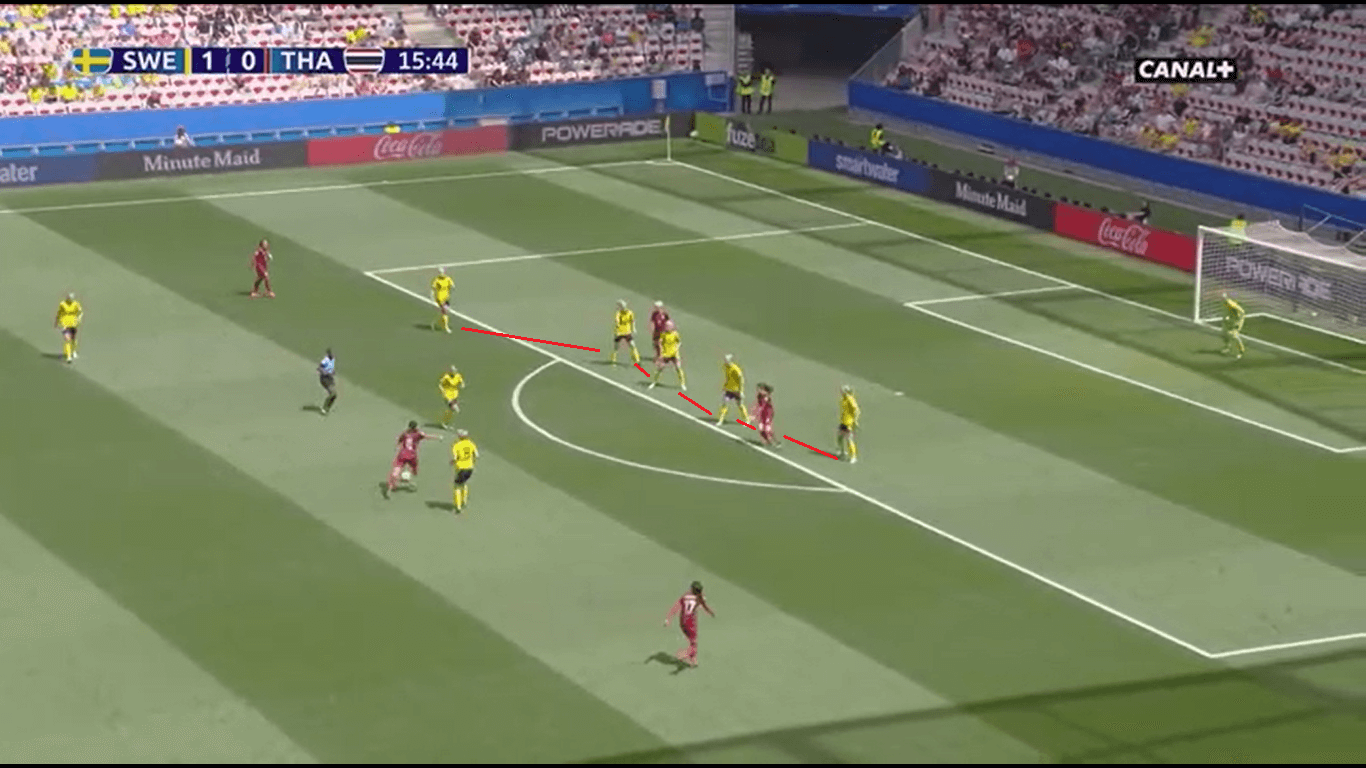 This is one of the more positive examples. Sweden ran into a counterattack, where they had at first a numerical inferiority. However, they ran back quickly, which resulted in a seven to five advantage near the ball. They could have defended the situation better though, with one defender stepping out of the back line to block the shot attempt. 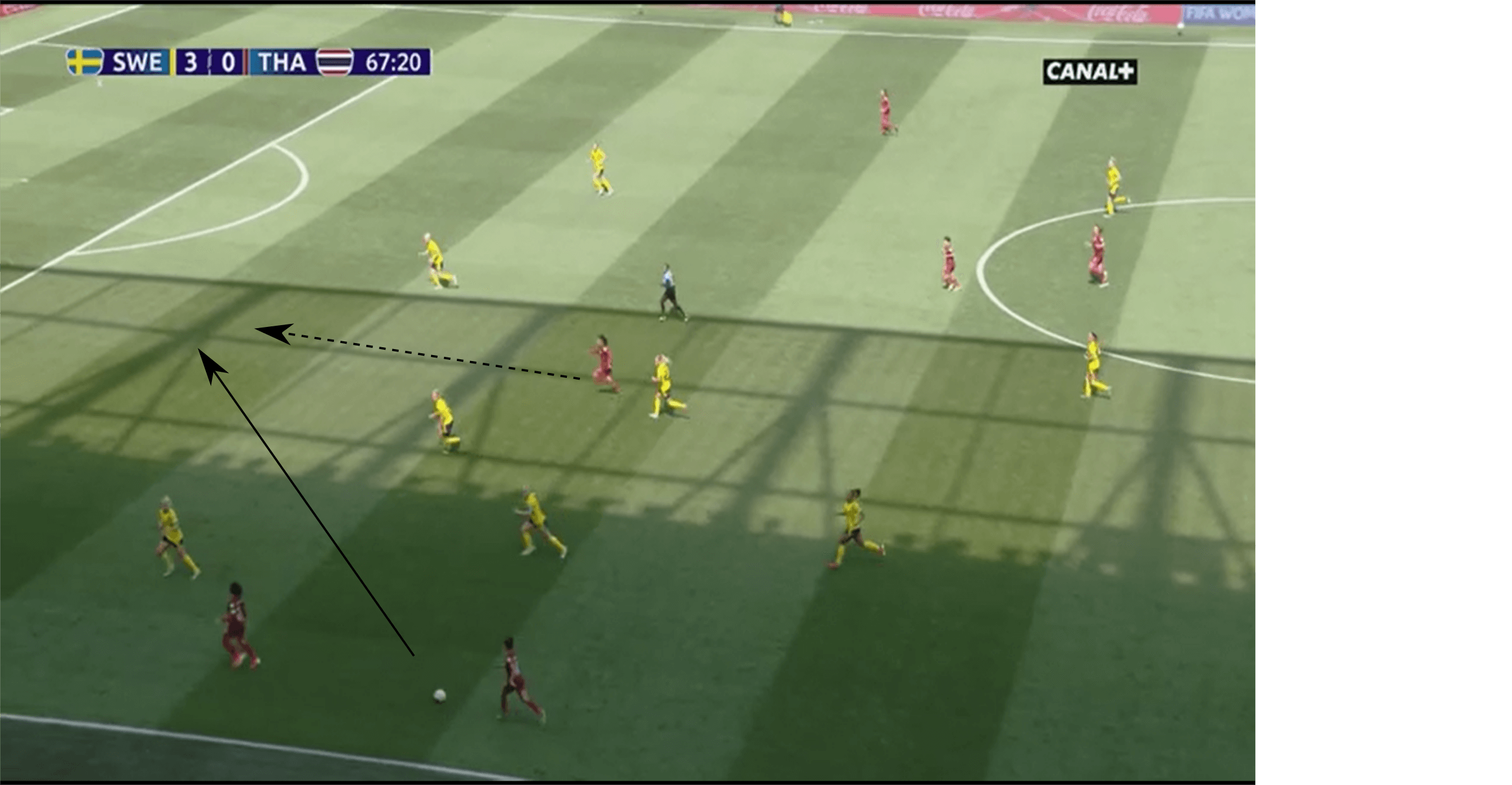 Here, they weren’t able to run back just in time. The problem is that while running back, there is no one pressuring the ball and no one closing the passing lane. Sweden just try to get as many players behind the ball as possible, which proves to not work out well. 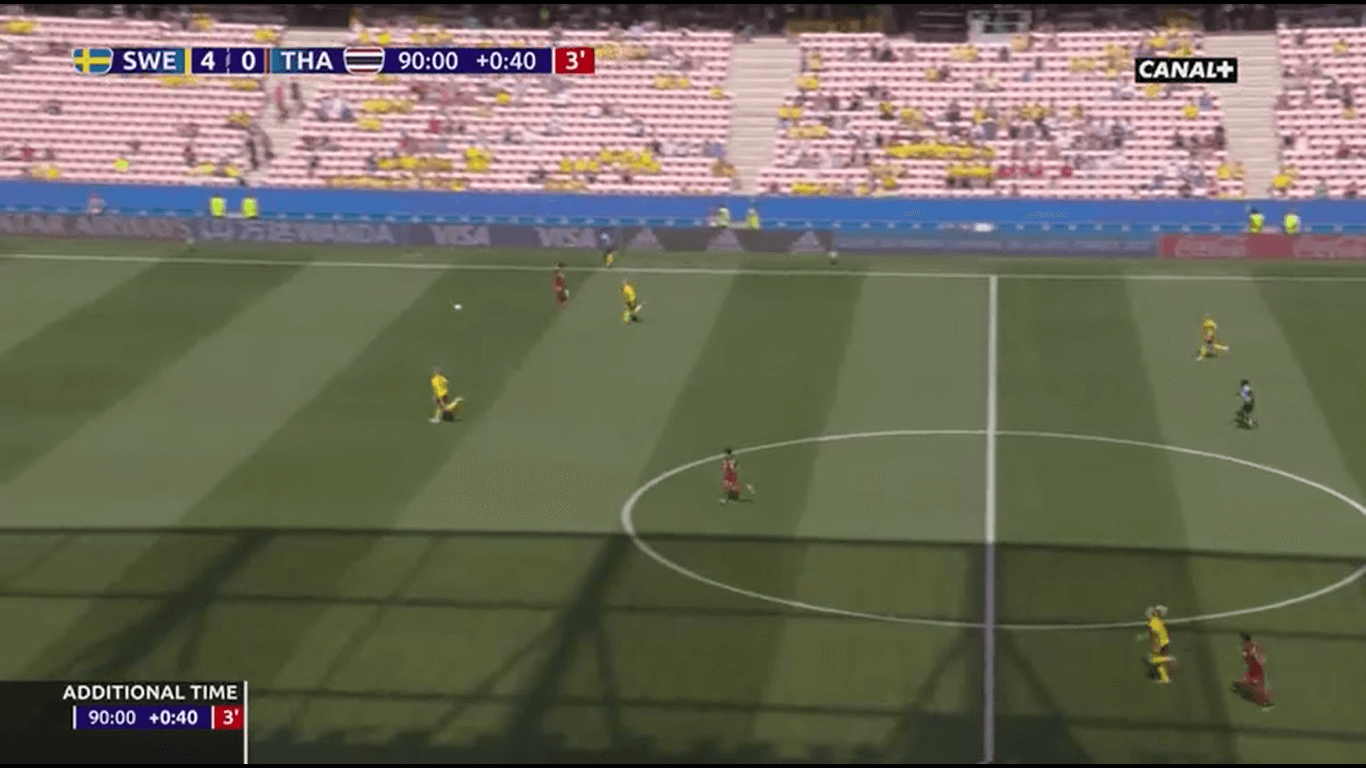 In the stoppage time, Thailand started a last, ferocious counterattack. They were able to create a two against two situation. Sweden weren’t able to run back in time. Both Swedish defenders concentrated on preventing the pass into the centre, which enabled Kanjana Sung-Ngoen to score “a goal that meant so much” for Thailand. The lack of aggressive and intelligent counterpressing along with an offensive mindset and a high defensive line causes these problems for Sweden. Against stronger opponents, this can break their neck.

Thailand tried their best to not have another disastrous result after the first match. Against a much stronger opponent, they had a huge physical and technical disadvantage, compromising their tactical approach. In terms of defensive discipline, they also showed weaknesses, making it rather easy for Sweden to dominate the game. Thailand didn’t have the ball all that much, so there was no proper build-up. Occasionally, they were able to make great counterattacks, resulting in an emotional goal for them.

Sweden on the other hand did their duty and took home three games. Due to their superiority, they weren’t challenged. Against stronger opponents, like their next game against the USA, this will most likely look different. There, they have to improve in order to reach their high goals in this year’s FIFA Women’s World Cup.