Following USA‘s 13-0 demolition of Thailand, the reigning World Champions were not looking to slow down their goalscoring ruthlessness against World Cup debutants Chile. Chile performed admirably in their 2-0 loss to Sweden.

This tactical analysis will show the reasons for the 3-0 victory of the USA over Chile and in the light of this the elimination of the Chilean since they also lost their first game against Sweden. Considering this, the USA, as well as Sweden, will progress past the group stages of the FIFA Women’s World Cup 2019. 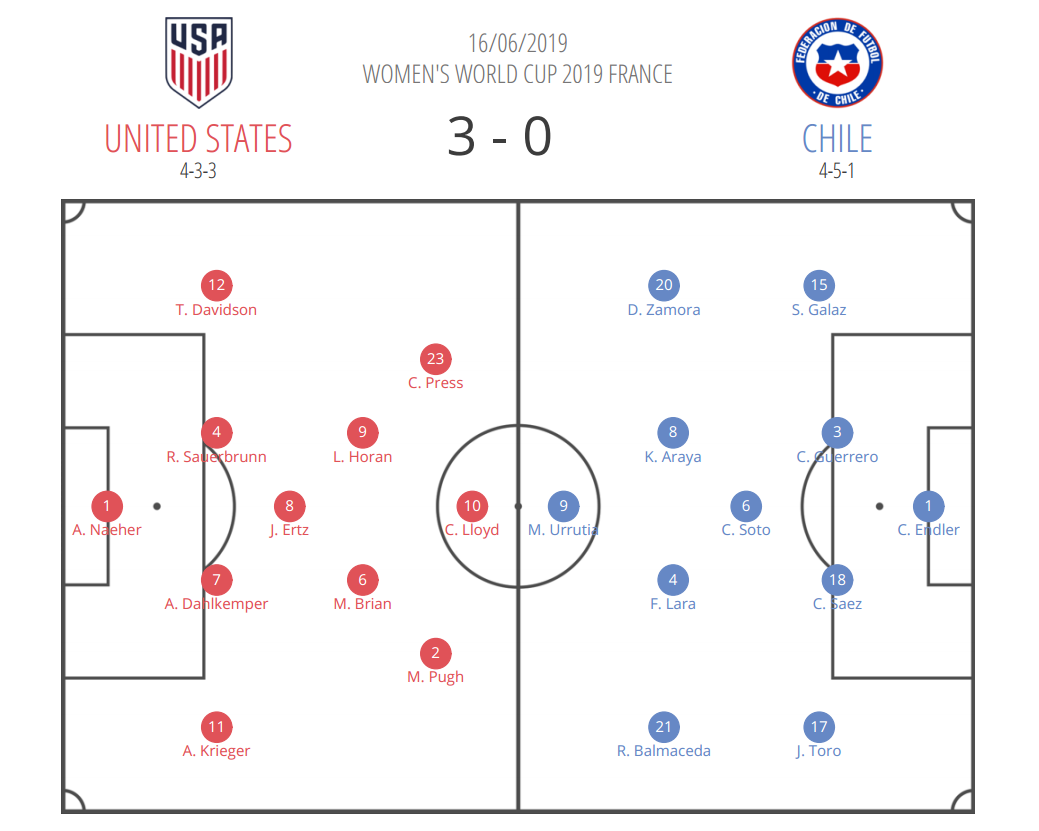 Chile coach José Letelier made two changes compared to the first game of the group stage against the Swedish national team. Javiera Toro replaced Daniela Zamora as the left-back and Claudia Soto replaced Yanara Aedo in midfield. They lined up in a 4-3-3 which turned into a 4-5-1 when the U.S. was in possession.

So, the back-four consisted of right-back Helen Galaz, center-backs Carla Guerrero and Camila Sáez, and Toro. Soto, Karen Araya and Francisca Lara occupied the central midfield. Daniela Zamora, as well as Rosario Balmaceda, played on the wings and Maria Urratia was the only striker.

On the other side, Jill Ellis lined her team up in the classic 4-3-3 formation like in the game against Thailand. However, there were a lot of changes in personnel. For example, the two great stars Alex Morgan and Megan Rapione just took place on the bench. In general, Ellis made seven changes compared to their first game.

The back-four was made of Ali Krieger, Abby Dahlkemper, Becky Sauerbrunn and Tierna Davidson. Julie Ertz played last time as a centre-back but in this match, she was in her usual position in the defensive midfield.

Lindsey Horan and Morgan Brian were in charge to occupy the centre together with Ertz and should try to support the two wingers Christen Press and Mallory Pugh as well as the captain and lone striker Carli Lloyd.

The U.S. pressed in at their opponents from the very first second of the match. They tried to give Chile no chance to have a calm and organised build-up. To achieve that, they used three different kinds of pressing. At first, the man-orientated pressing where every player tries to mark one or two opponents. Secondly, when they tried to put pressure on the opponent and create a clear numerical superiority in the according zone. And lastly, the counter-pressing when they pressed in at the Chilean team as soon as Ellis’ team lost possession.

In the image below, you can see the first style of pressing. Every player is marking one of his opponents or cuts of the passing option. Furthermore, at least one player puts pressure on the opposing player in possession. In light of this, the Chilean players had no short passing options and so they had to play a lot of long balls.

However, in some situations, they also used their second form of pressing. In these occasions, they put pressure on the Chilean player on the ball. In these situations, it was not that much about cutting off passing options but they tried to make the build-up of the opponents very hectic and to come into a duel for the ball.

Since the U.S. wanted to dominate the game, they always tried to win back the ball as soon as possible. So, as soon as they lost the ball, they once more pressed in at the opponent in possession.

Considering this, the Chilean players had almost never time build up their play from the back with short passes. The United States forced them to long balls. However, since a lot of the Chilean players were positioned so deep, there was only Urratia up front who was understandably not able to recover the possession against at least four opponents.

How the United States attacked

As already explained, Chile only played long balls without any success and so the U.S. was absolutely dominating the game with the aid of possession. On the other hand, Letelier’s team had no single shot either on or off the goal.

Ellis’ team built up from the back with short passes till they found a way to get someone in the wide areas into a good position. So, they didn’t play that much through the middle and concentrated more on the wings.

The four defenders and the deep positioned Ertz were responsible for the build-up. Krieger and Davidson had two completely different tasks. Either they positioned wide and high up the pitch to receive the ball and cross it into the middle. Or they stayed very central like in the image below and tried to lure the Chilean wingers a bit more into the centre. As a consequence, there was a lot of space in the wide areas for the wingers Pugh and Press.

Ertz was very important for the build-up because without her the four defenders would only have horizontal or long passing options. She always tried to position clever and create numerical superiority.

They often used diagonal passes to get into a good crossing position. In the image below you can see a perfect timed diagonal pass from Davidson to Krieger. In this case, each full-back had one of the already explained functions. Davidson stayed narrow to support the centre-backs in the build-up while Krieger positioned on the opposing wing and then delivered a cross.

Since the United States dominated the game, it was just a matter of time until they score a goal. Without any surprise, they scored between the 11th and 35th minute three times. As you would expect, the first one was after a cross and the other two goals resulted out of corners. In these cases, they utilized their superiority in the air, which is also one of the main reasons why they crossed so often.

The USA had 15 corner kicks in this match and especially the ones in the first half were dangerous. The main reason for that was, that the Chilean team marked every opposing player one-on-one, even though they were so inferior when it came to aerial duels.

Adjustments in the halftime

Since the halftime score was 3-0, it was clear that the game was over and that the United States won’t play another 45 minutes with such intensity and energy. However, Chile made some little changes to avoid a higher defeat. Firstly, they didn’t sit back that deep anymore and put pressure on the opponents higher up the pitch. In addition, they were more aggressive when it came to duels.

In addition, they changed their way how they defended the corners of the United States. They tried to avoid one-on-one duels in the air and so they defended with more players in the penalty box.

Considering these two changes and the obvious fact, that the Ellis’ team didn’t need to play with full intensity, the second half was goalless.

The first 45 minutes showed what the United States is among the best teams in this World Cup. They dominated Chile with the aid of their aggressive pressing and never gave them any chance to build up their attacks with short passes from the back. Whenever they use their pressing, it will be hard for every opponent to get into the game.

On the other side, Chile is with one game to go already surely out of the World Cup. However, in their last match, they’ll face Thailand who disappointed until now and so this could be the chance for the Chilean team to get at least one win out of the three group stage matches.