Italy and Brazil will go into this FIFA Women’s World Cup game with different targets. After victories in their first two matches, Italy now need one point to secure the first place. Meanwhile, Brazil’s defeat to Australia means that they now have to beat Italy and very likely (in the likely event of Australia beating Jamaica) have to get a better goal difference – which will be quite a difficult task. In this tactical preview, let’s look at how the teams may play and the tactical match-ups between them.

We saw Brazil deploy two different formations in their two matches: their usual 4-4-2 against a much weaker Jamaica side, and a 4-1-4-1 with the aim of sitting deep and counter against Australia. In this match, I believe they will have to go with the more aggressive 4-4-2, as they need to score as many goals as possible, bearing in mind Australia’s likely easy win over Jamaica.

Against a top side like Australia, we saw both Brazil and Italy happy to concede possession and look for chances in counter-attacks. In this match, Italy with their point advantage in the group will probably be the only team to do so.

Facing Australia, we saw Italy mostly defend in a 4-3-3, but there are a few variations:

They used a 4-3-3/4-1-2-1-2 formation out of possession with the aim to block progression through the centre. Bonansea and Mauro tried to block passing lanes from centre-backs to the double pivot but did not press the centre-backs. Girelli tried to position herself between Australia’s pivot and looked to mark the ball-near midfielder if the ball is close to or on the wings.

Galli and Cernoia added cover behind the first line, with Giugliano the deepest midfielder. Bonansea often tracked the opponent’s right full-back, while on the other side, it would often be central midfielder Galli who stepped out to press the left-back. In these cases, Italy’s formation looked more like a 4-4-2.

A similar tactic can be used against Brazil’s 4-4-2. There will probably be some differences for Italy’s back four though. Brazil’s front four won’t pin them deep back like Australia’s high front four, so they will be able to move high to support the higher pressing lines.

However, that could also be an opportunity for Brazil, who often like to attack through the wings with the wingers and forwards looking to combine and exploit the spaces behind the opponent’s full-backs. Brazil can exploit the position of right-back Bergamaschi, who is essentially a winger like they did against Australia.

Italy’s defence is not good with crosses, that isn’t helped by their unsupportive midfield. They often leave opponents free at the far post relinquishing aerial control. Brazil has a very strong header of the ball in Cristiane, who will keep Italy’s centre-backs occupied. It is necessary for Brazil to put many players into Italy’s box to disrupt their defensive system. The likes of Debinha and Marta will lurk at the far post looking to score the important header. 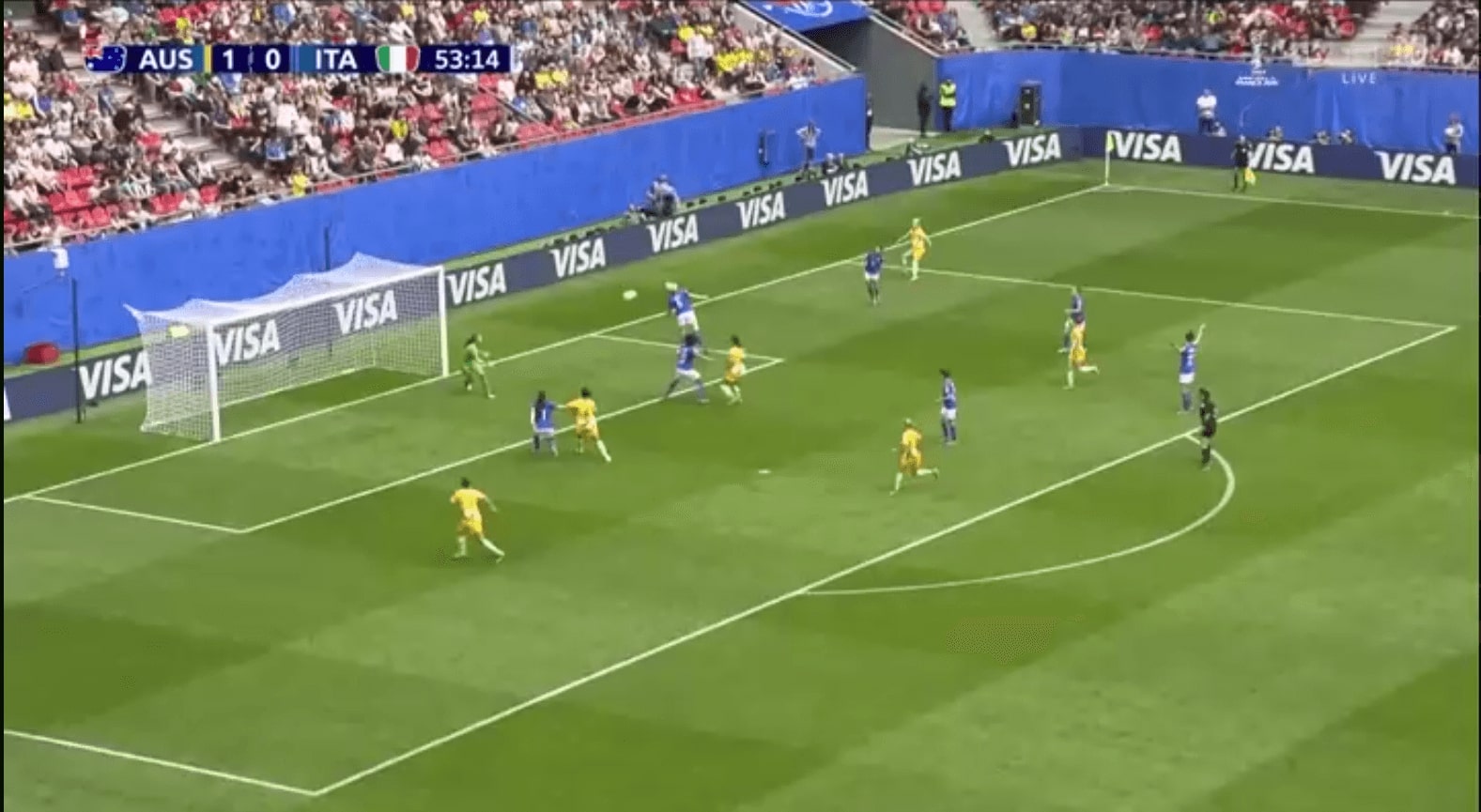 Very often Italy’s system left one man free in the box. Brazil often look to progress the ball through the full-backs, who will try to combine with the near winger or find the dropping deep forward. Both Marta and Cristiane are good with the ball and can combine with wingers expertly to look for chances to cross the ball in.

Below we see Brazil’s left-back Tamires trying to find Marta behind Australia right-back, who is lured higher up by left winger Debinha. Italy must have someone to help the full-back (eg. a winger in a 4-4-2) to avoid these kinds of 1 vs 2. Brazil will mainly try to attack the left side with the legendary Marta, so the deployment of two right wide players in Bermagaschi and Guagni like against Jamaica might prove crucial for Italy.

Not to mention Brazil’s full-back overload:

One problem with Italy’s defence is that captain Gama often follows her designated forward tightly. If they try to follow Marta or Cristiane, both of whom drop deep a lot, this will open gaps in Italy’s defence for the other forward or the near winger to exploit. We can see an example below when an Australian player lured Gama high up and the run into space behind Gama.

In addition to progressing through the full-backs, Brazil tried to use their centre-back to pass directly to the central midfielder. This helped them get past Australia’s front five and quickly progress the ball upfield, as we can see below.

Italy’s 4-1-2-1-2 can leave similar gaps, so Brazil’s pivots should exploit those. The wingers (eg. Andressa) can move into the half-space and exploit that space too.

Brazil must improve their defensive problems

In the match against Australia, Marta hardly tracked back without the ball, even as an attacking midfielder in the 4-1-4-1 formation, which disrupted Brazil’s defensive organization. It’s much better if she is a forward in a 4-4-2 – the midfielders won’t have to think about covering for her anymore.

In defence, Brazil will look to play similarly to their last match against Australia. They need to stay compact both vertically and horizontally and block all the progression through the centre. In the match against Australia, we saw how poor Brazil’s defence was when dealing with crosses from wide – all the three goals they conceded were from crosses. However, Italy mostly like to play short through the centre and their forwards aren’t great headers of the ball, so Brazil’s tactics will likely work well this time.

Below is an example of Brazil’s defending. The midfielders move together, trying to stay narrow and compact while leaving the wide areas open for the opponent’s full-backs to exploit. However, we can see that they still couldn’t cover a central passing lane to the forwards.

In the match against Jamaica, Italy’s highest forward, Sabatino, like to position herself between the lines to get the ball upfield. Normally we see the Italians centre forwards try to stay close to the opposite centre-backs and look to attack the spaces behind them, rather than facing their own goal and drop to progress the ball. In my opinion, Sabatino should be used in this game.

Again we see some space in the middle of Brazil’s midfield four. Italians wingers like Bonansea love to tuck into the half-space and will be able to exploit such gaps.

With Marta up front, Brazil will not look to press high. Italy’s back four will comfortably play out from the back as Brazil only try to block central progression. In some instances when they tried to press with the front two in the match with Australia, the distances between the forward players was big. They were not vertically compact and did not press as a unit: the backline tried to stay low, avoiding long balls over the top.

Therefore when the midfield won the ball back, the three lines were too far away from each other and they couldn’t exploit the opponent’s defensive transition phase. In my opinion, Brazil’s back four need to push higher to help the team compact without the ball and build up more effectively with the ball, otherwise, they will be in big trouble.

In the match with Australia, we saw Italy try to deliver some crosses from the half-spaces, which really troubled the Australian defence, who are good at dealing with aerial threats. We know how bad Brazil are when dealing with crosses, so Italy should really take advantage of the situation. Below we see an Italian cut inside and cross. The cross got over the heads of Australian defenders and created a big chance for the Italian striker.

Brazil will have to push up to search for goals, so Italy can comfortably sit deep in a low block and look for chances to spray passes behind Brazil’s defensive line. Here we see Bonansea tucked inside to receive the through ball from deep and result in a one on one situation created.

This match will be a tactically intriguing game between two good sides. Using analysis, we have concluded Brazil’s want to control the possession and try to score as many goals as possible, while Italy will happily sit deep, absorb the pressure and wait for chances to hit their opponent on the counter-attack. Brazil will surely do whatever they can to win this match, but if Australia secures a big win over Jamaica, all of their efforts will be in vain.