On Friday evening, Augsburg produced what is one of the biggest shocks of the Bundesliga season so far, beating Bayern Munich 2-1. Such a loss for Bayern has opened up the title race once more, with rivals Borussia Dortmund now only one point behind the league leaders. The win lifted Augsburg from 16th place into 15th, giving them just their third league win of the season. This tactical analysis will provide an analysis of some of the key tactics seen in this Bundesliga game.

Augsburg lined up in a 4-4-2, with Rafael Gikiewicz in goal. Iago and Robert Gumny played on either side as full-backs, with ex-West Ham centre-back Reece Oxford and Jeffrey Gouweleeuw partnering one another in central defence. Arne Maier and Niklas Dorsch worked together in central midfield with Daniel Caligiuri and the versatile Mads Pedersen playing on either wing. Altin Zeqiri led the line alongside Andre Hahn.

Bayern Munich brought Benjamin Pavard back into the side for Niklas Sule, with pavard operating at right-back in a back four, composed of Dayot Upamecano, Lucas Hernandez, and ex-Reading full-back Omar Richards. This was just Richards second start of the campaign – understandably so given that he is an understudy for Alphonso Davies. In midfield there was no Joshua Kimmich, so Marcel Sabitzer partnered Leon Goretzka in a double pivot with Thomas Muller sat in front of them. Serge Gnabry and Leroy Sane played on either wing with Robert Lewandowski leading the line. 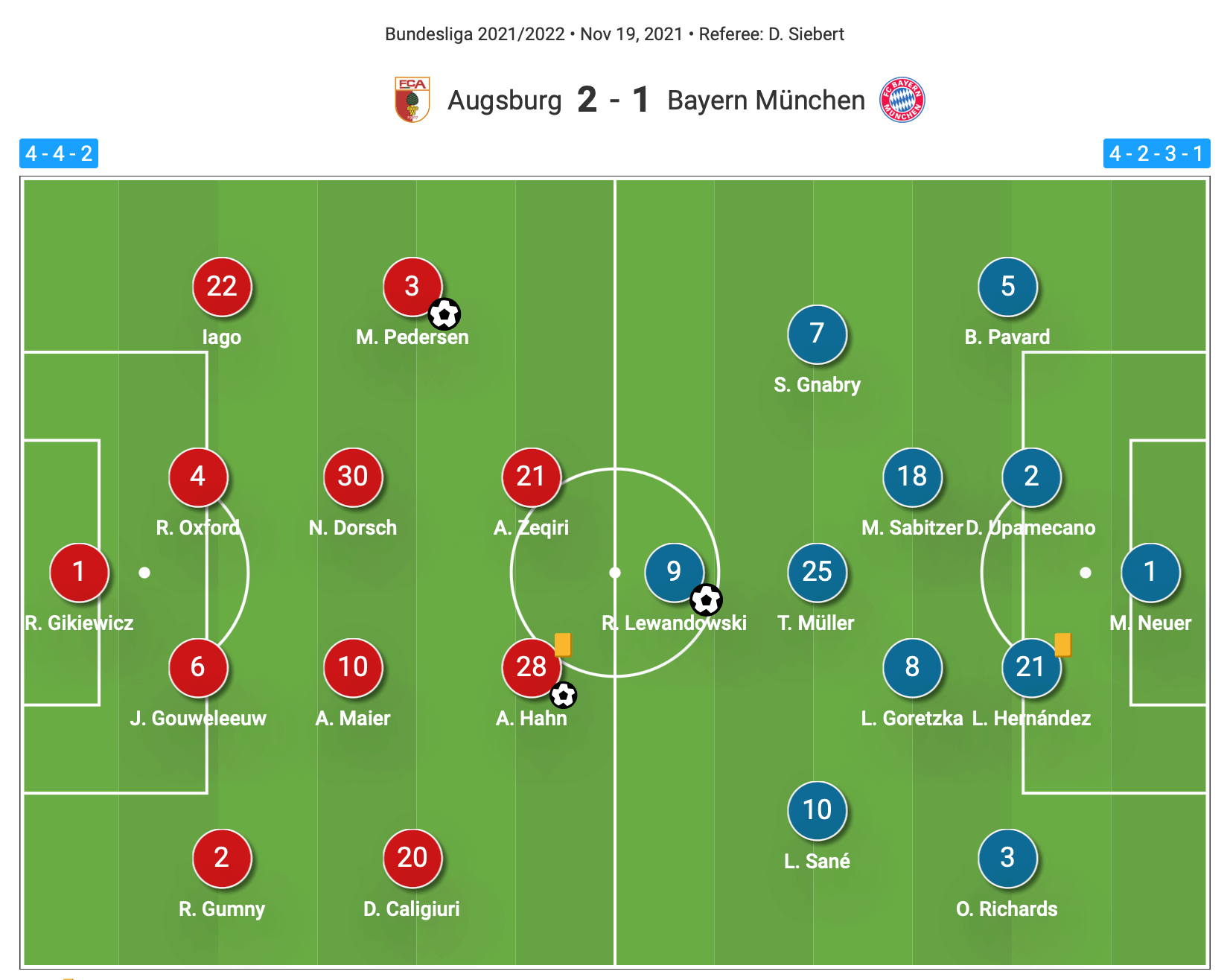 Augsburg defended resolutely from the first minute, and set up to frustrate Bayern. They allowed the visitors to have the bulk of possession (75% of the ball on the day), and instead just focused on ensuring Bayern weren’t able to break them down.

Augsburg set-up in a compact 4-4-2 mid-block, and their midfield worked around the front two who remained centrally compact in the hopes of preventing Bayern from being able to play through the central channel of the pitch. 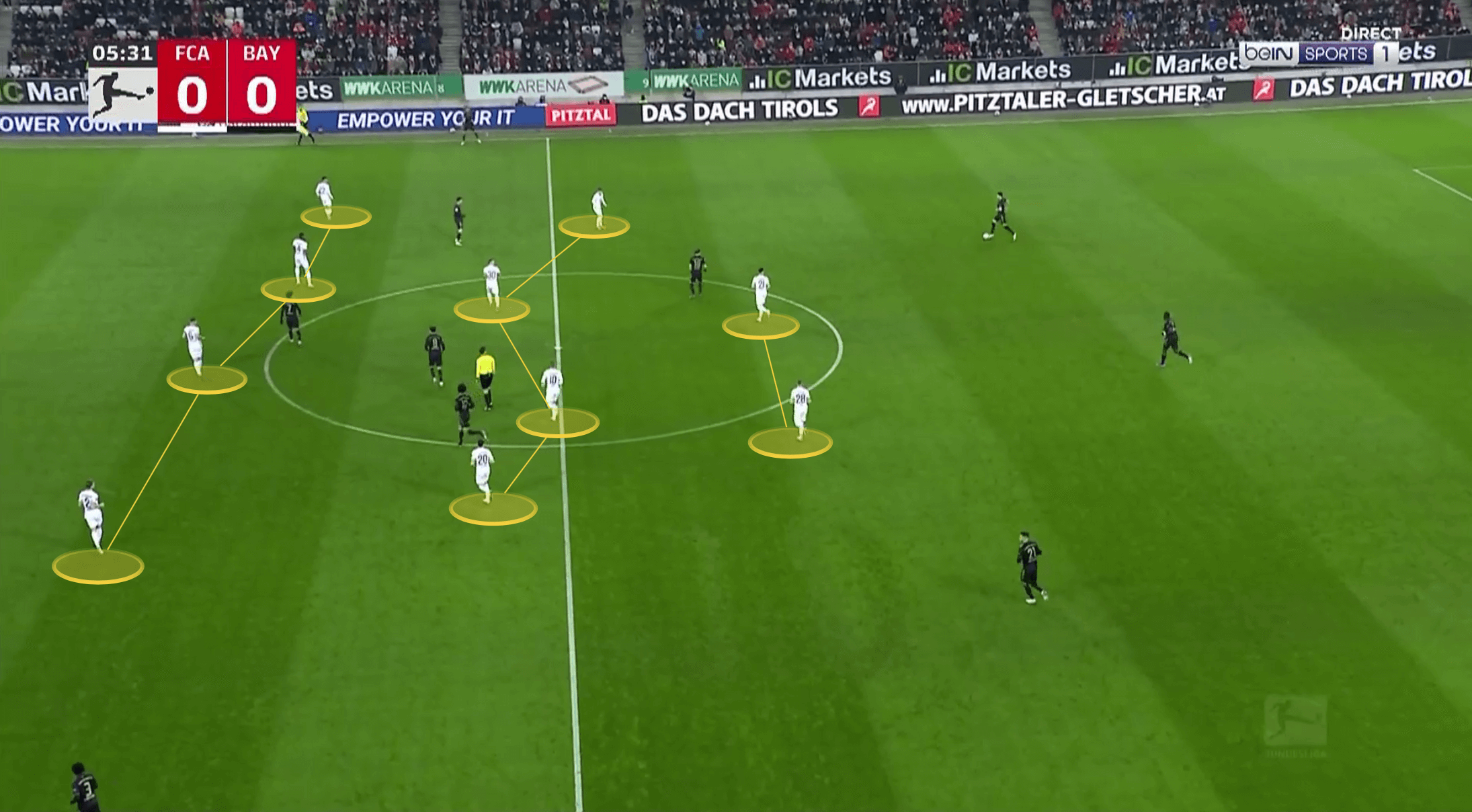 When the ball was worked wide, Augsburg were aggressive in shifting across the pitch and maintaining this compactness, whilst also pushing players forward from the back line to suffocate any potential space for Bayern. We can see this happening with left-back Iago, and centre-back Oxford pushing up to prevent Muller, in possession, from being able to play inside. Lewandowski looked to operate between the midfield and defensive lines whilst Sabitzer looked to find space between the forward and the midfields, but as we can see from this compactness in the following image, neither were able to successfully do so. Normally it would be highly dangerous for a left-back and centre-back to push forward in this way, however, we can see how right-midfielder for Agubsurg, Caligiuri, and Maier in central-midfield had both dropped back to give Augsburg four players protecting that central space against three Bayern attackers. 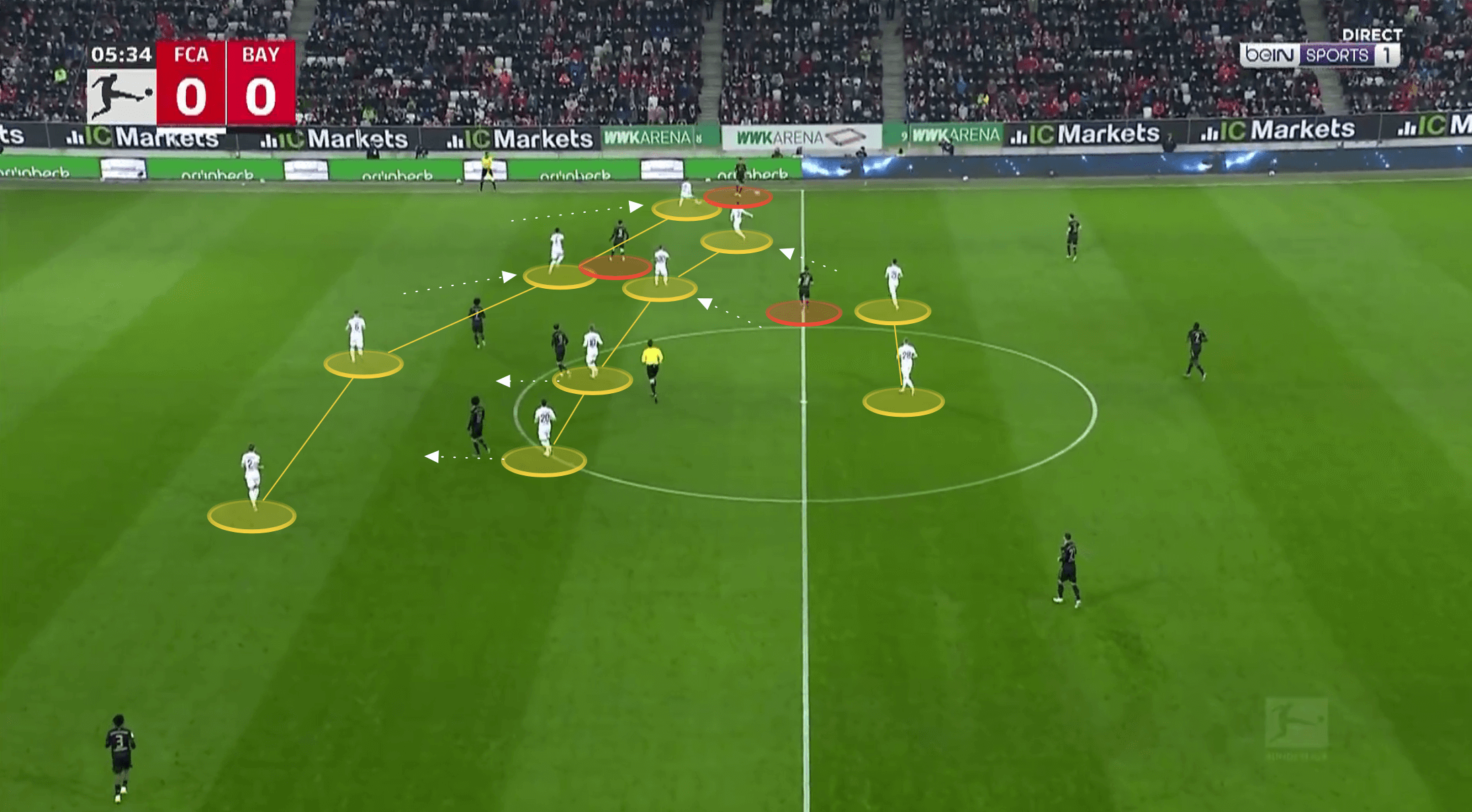 The two Augsburg forwards were generally disciplined at staying central. They looked to prevent Sabitzer, Goretzka, or Muller from receiving centrally. If the ball was played either side of them, then Augsburg Head Coach Markus Weinzierl preferred them to not shift across the pitch but rather have the wide players in his midfield four step forward to press. 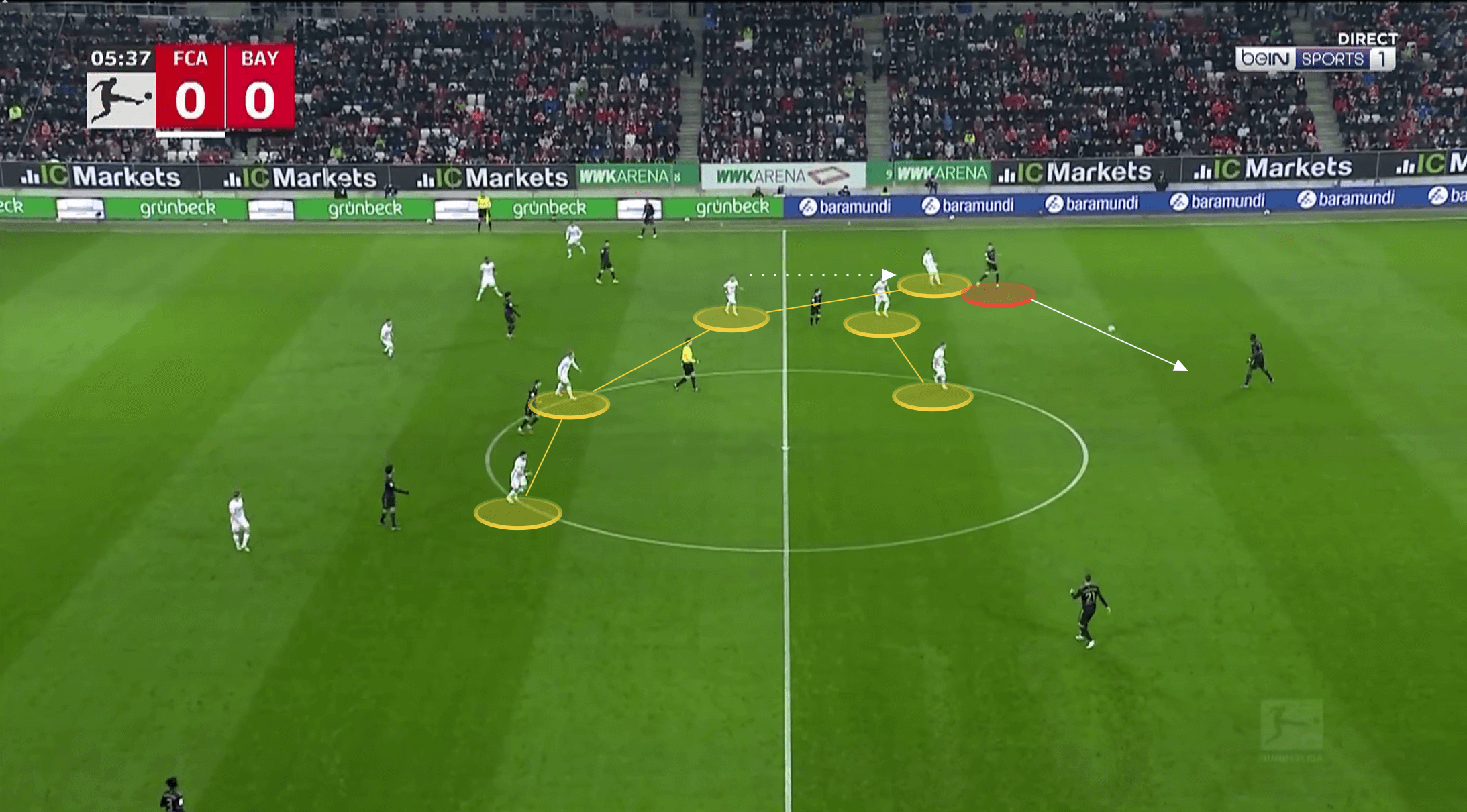 Of course there were times where the front two did get drawn apart, but the same principle was used here by Augsburg, with one of the midfield four, this time the central-midfielder, stepping out to press the Bayern player, with the rest of his midfield teammates getting more compact as a result. 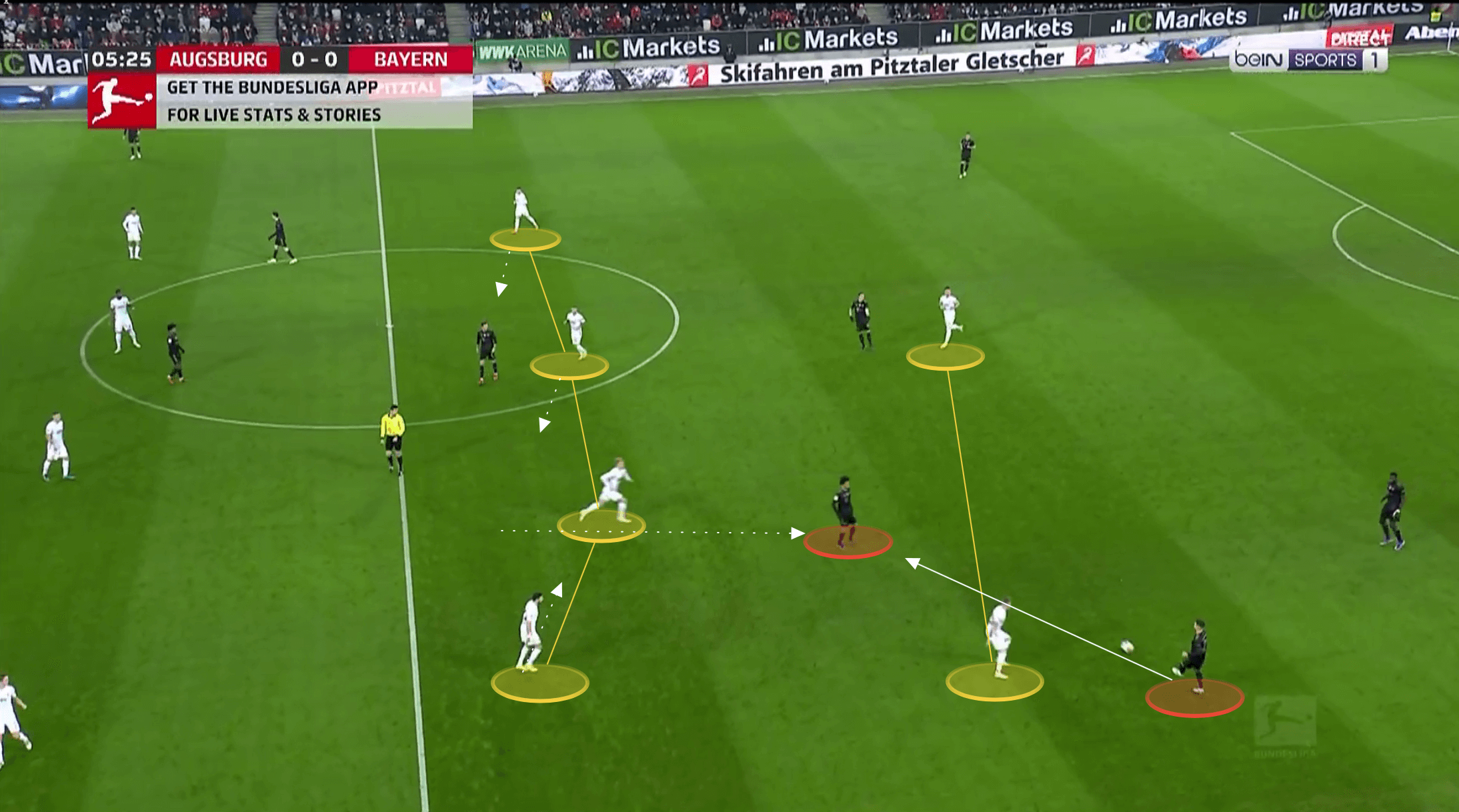 How Bayern looked to break Augsburg down

Bayern had a frustrating day. They still managed to break down Augsburg on many an occasion, taking 18 shots on goal on the day, however, only four of these hit the target. Yet they still finished the game with a 2.11 xG, far superior to Augsburg’s 0.39 xG, and at times they put on a clinic of how to break down a 4-4-2 block and create chances.

The first thing that was present throughout much of Bayern’s in possession play was their overall speed of play. Whilst the back four didn’t necessarily move the ball with an urgency for the entirety of the game, once the ball was played into the midfield, sequences of one-touch passes, supported by rotational movement from the entire front six, were not uncommon to see.

Bayern looked to move Augsburg’s shape around as much as possible, and ruthlessly exploit the space created as a result.

Despite Augsburg looking to prevent any of Bayern’s midfielders from receiving in the central channel, they continued to operate with a pivot in this space. This firstly ensured Augsburg’s front two were relatively restricted in where they could move and had to continuously check to see if they were covering this player. However, most importantly, is that it drew one of Augbsurg’s two central-midfielders forward. Even if the pivot wasn’t found, the Augsburg centre-mid had to be aware this player could receive the ball, and as a result their positioning was perhaps a little higher than they might like. If the pivot did receive, then this Augsburg midfielder would have to step forward to press and this would leave space behind them in the midfield. Secondly, Bayern ensured there was depth and width. Whether Pavard went wide, or it was one of Bayern’s midfielders who dropped into this position, it meant the Augsburg winger, Pedersen in the example below, had to also be aggressive in their positioning and would step to press this player if they received. The positioning of Bayern’s pivot and right-back, Sabitzer and Pavard here, mean that they could look to stretch the Augsburg winger and their inside central-midfielder, and create space to play through. 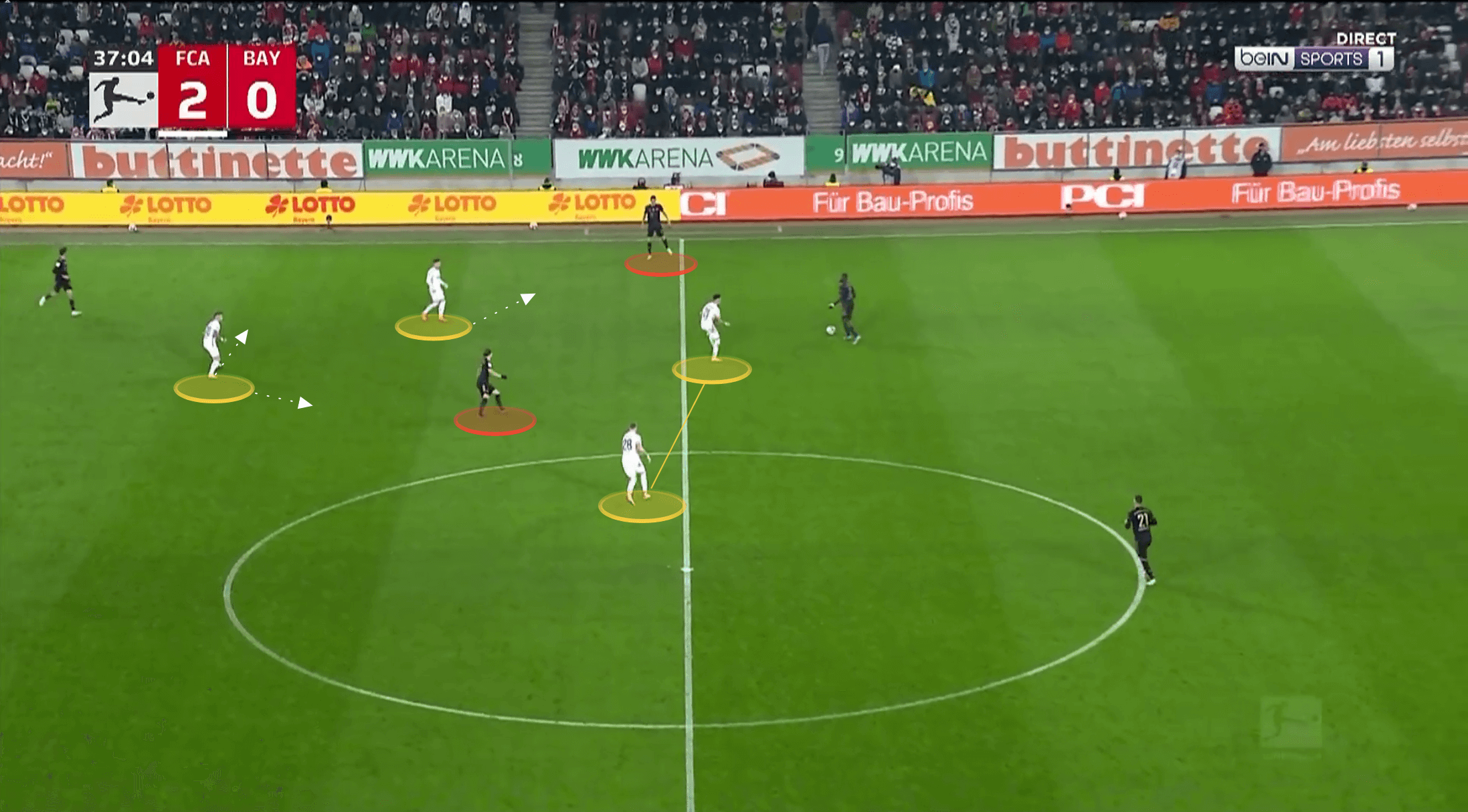 Bayern’s shape in possession looked like the one seen below, with a lopsided 4-2-3-1 often just representing itself as a 3-4-3 with Richard pushing forward down the left flank as Davies would normally do. With the presence of the pivot and the constant width in possession, Bayern would look to break lines, bypassing the midfield and playing directly into the front line. 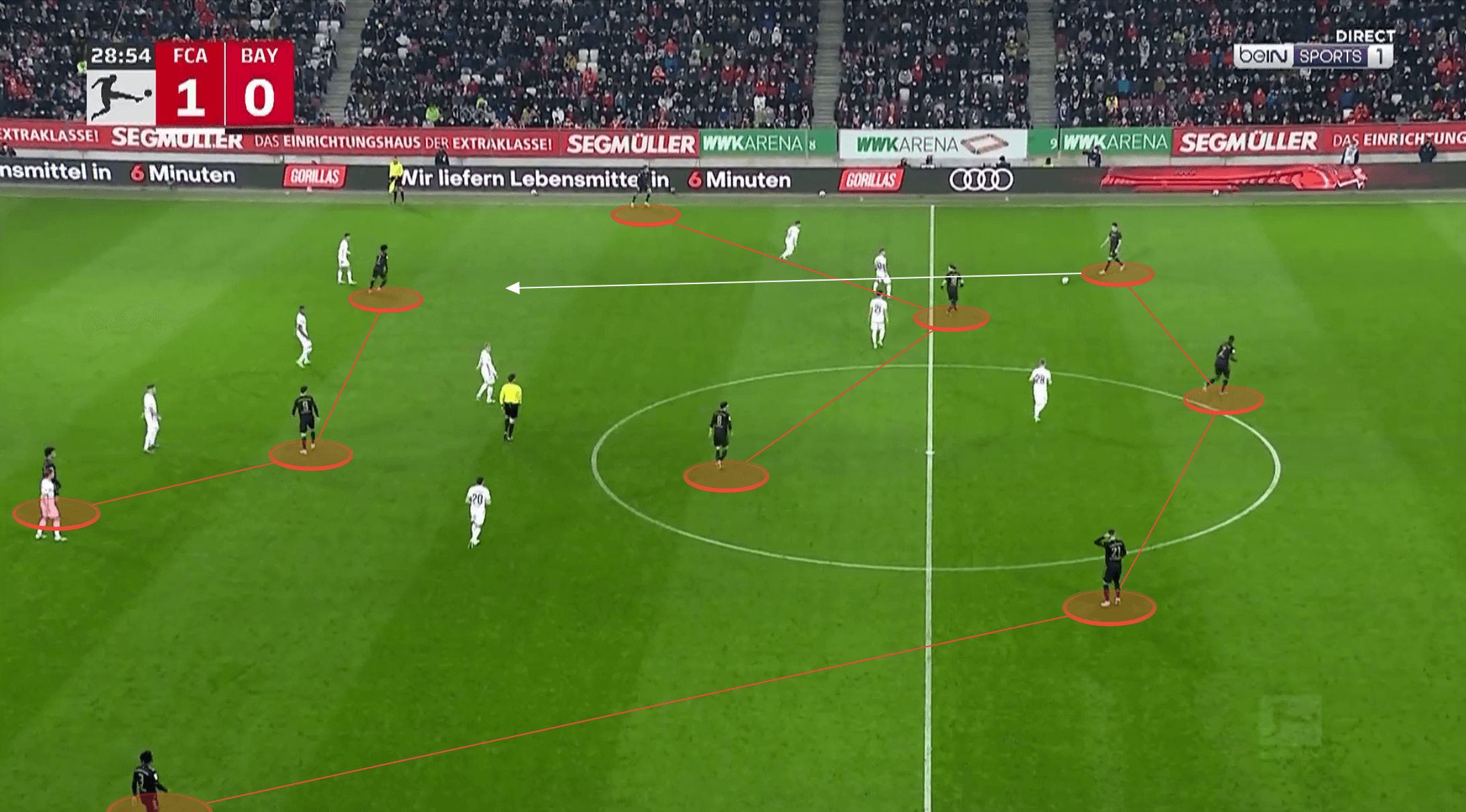 However, they could also play wide, and they used some really clever pass patterns and rotations to structure direct attacks past the 4-4-2 of Augsburg.

Below we can see Upamecano bypassing Pavard and playing wide immediately into Gnabry’s feet. The winger receives, and with Muller under-lapping from his initial central-midfield starting position, he can play down the line to his German teammate, before under-lapping himself and moving inside. 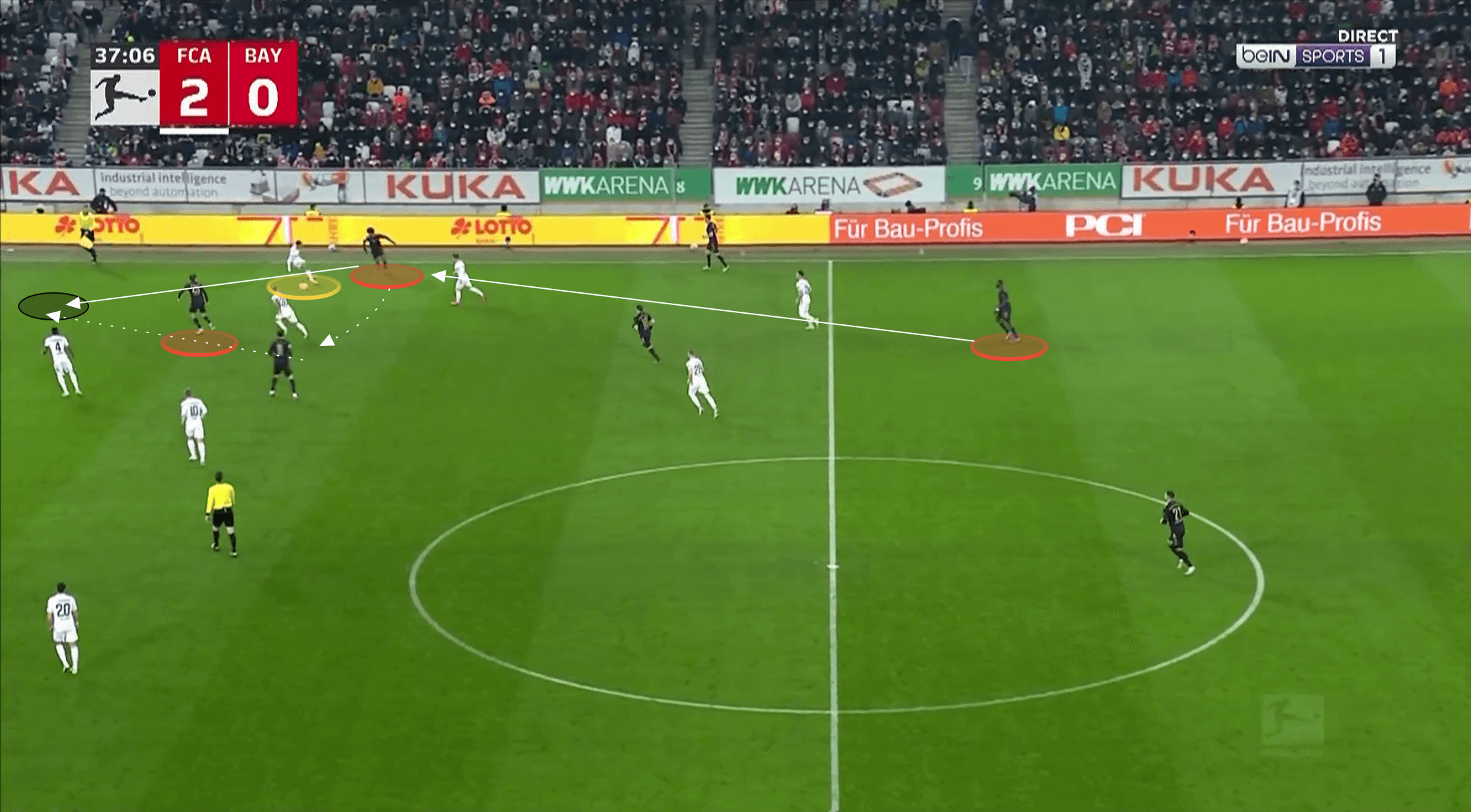 Muller then found Gnabry once more and with Lewandowski withdrawn out of the front line, there was plenty of space to hit a straight through pass beyond Augsburg’s back line for Sane to move onto. 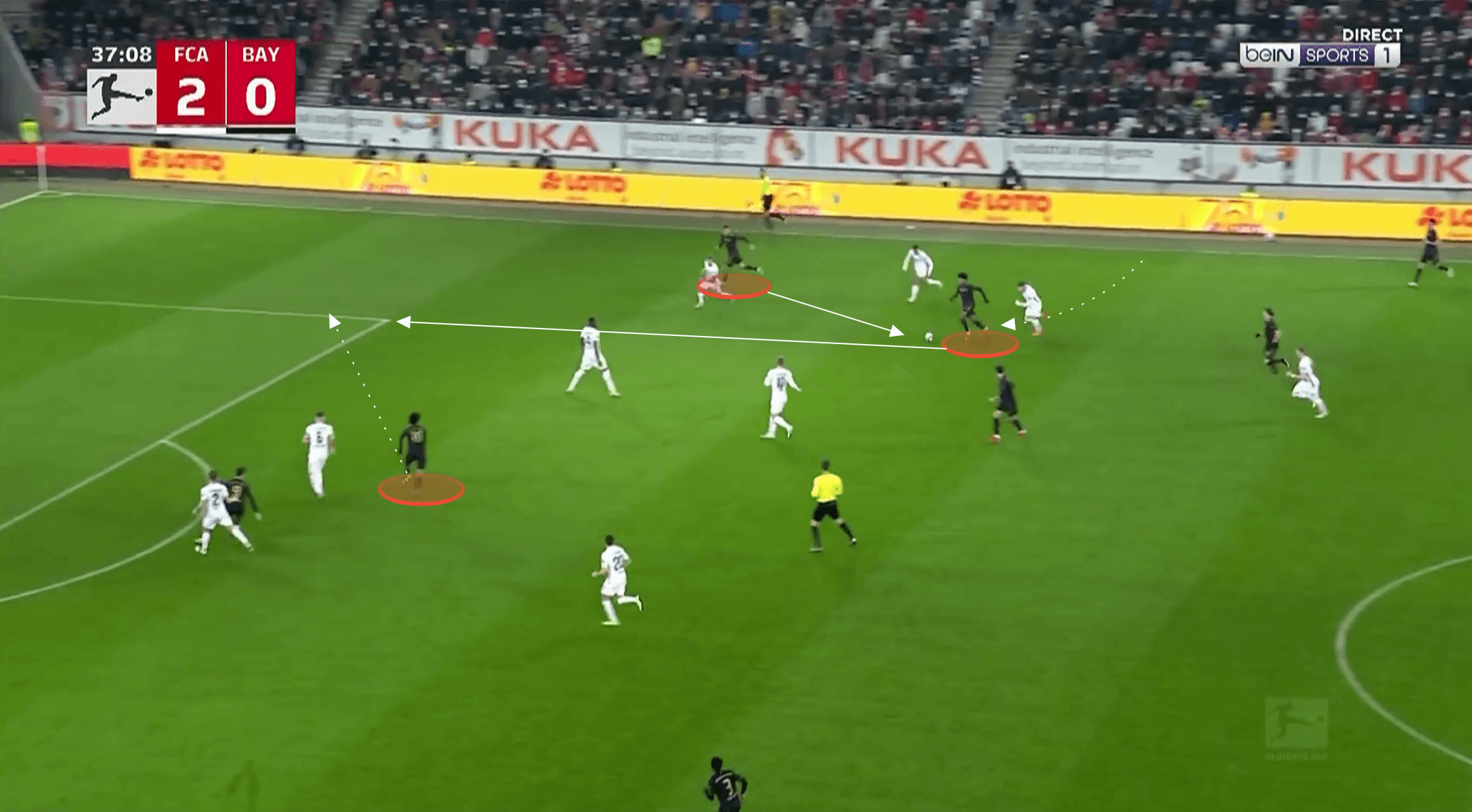 Of course all of this was done off of limited touches. Once the ball was played forwards out of the back line, the Bayern midfield moved quickly and played just as quickly to structure this attack.

Bayern’s pivot wasn’t always used to just create space behind them, but once they received the ball they had to be ready to play forward immediately. Below we can see Sabitzer receive, and immediately turn to hit his front line. Lewandowski would be ready to receive in this space, with Bayern leaving an open central channel to allow their centre-forward to do this. 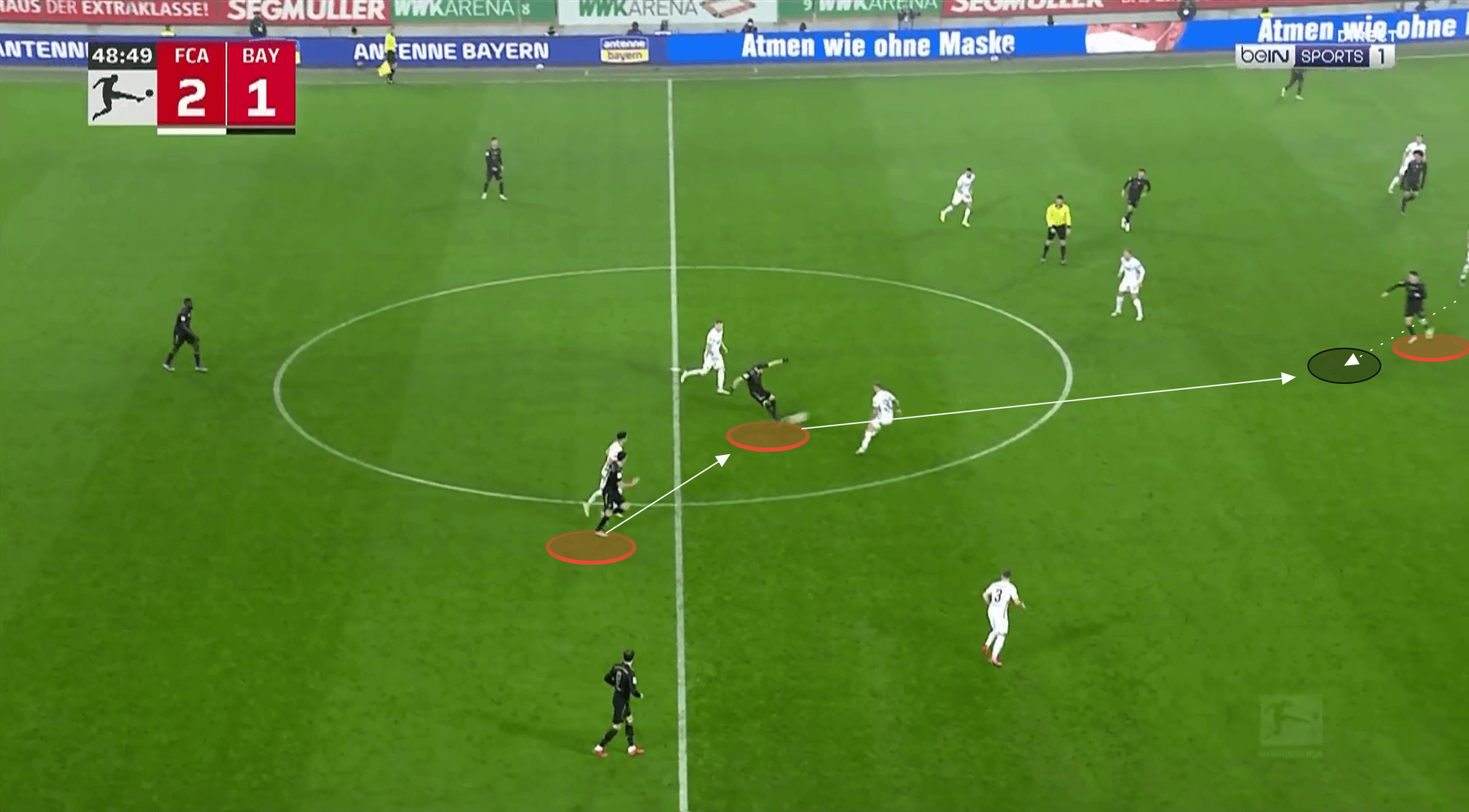 However, it was important there were midfield runners on his outside, which we can see occurs in the next image. Richards would stretch the pitch pushing well forward on his left side to ensure Bayern had a wide threat and the ability to hit a cross if necessary. But Sane’s positioning is perhaps the most important. By drifting inside and pushing high to play on the last man, it means the Bayern midfielder receiving from Lewandowski here, has time on the ball and isn’t immediately pressed by on of Augburg’s back four. 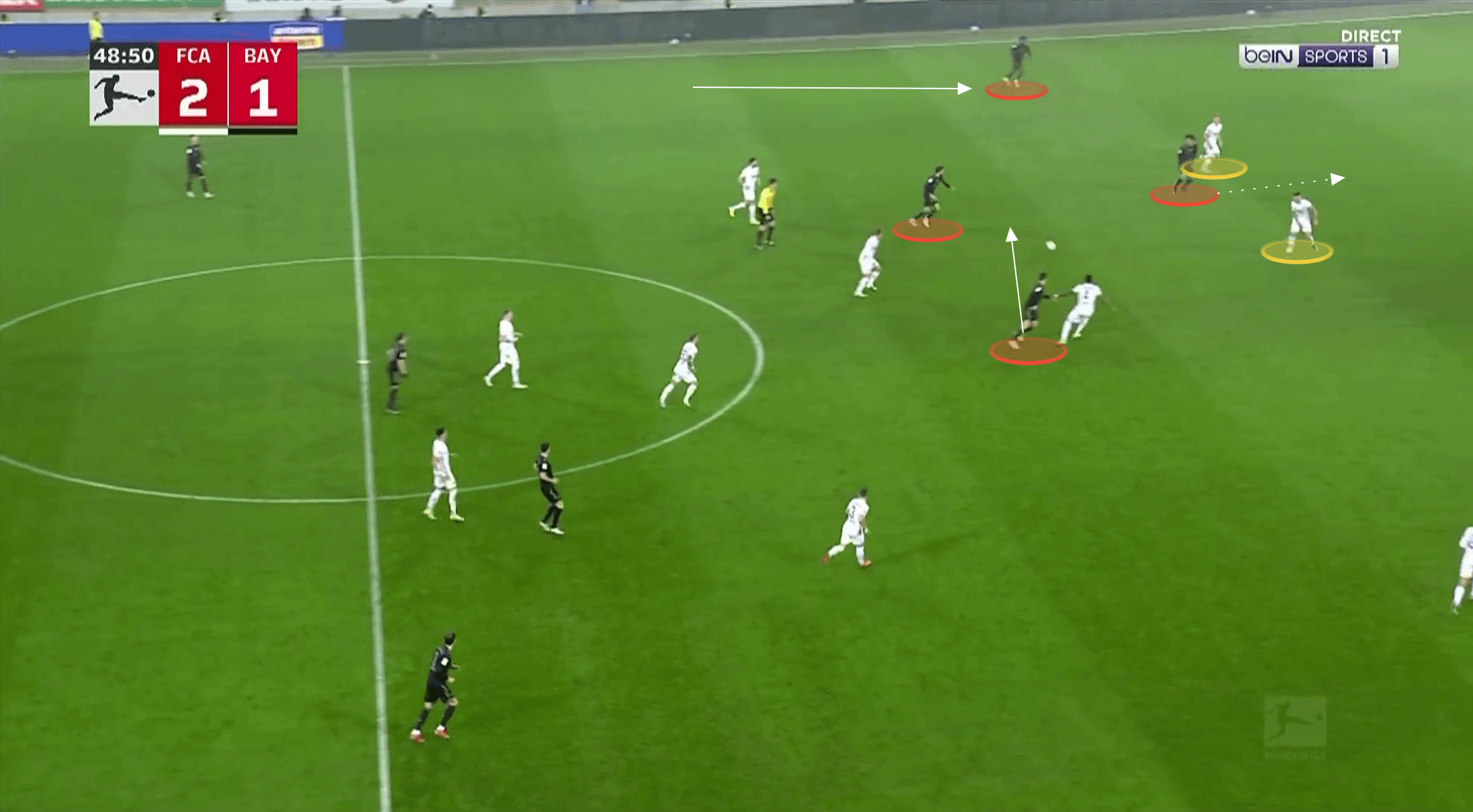 Augsburg managed only five shots over the entirety of the game, but managed to hit the target with three of these, and were truthfully ruthless with what chances they did create.

Their best opportunities came from quick breaks after winning the ball. Their compact 4-4-2 lent itself to ensure possession was easy to retain on attacking transition, as they always had players around the ball, as we can see in the following image. 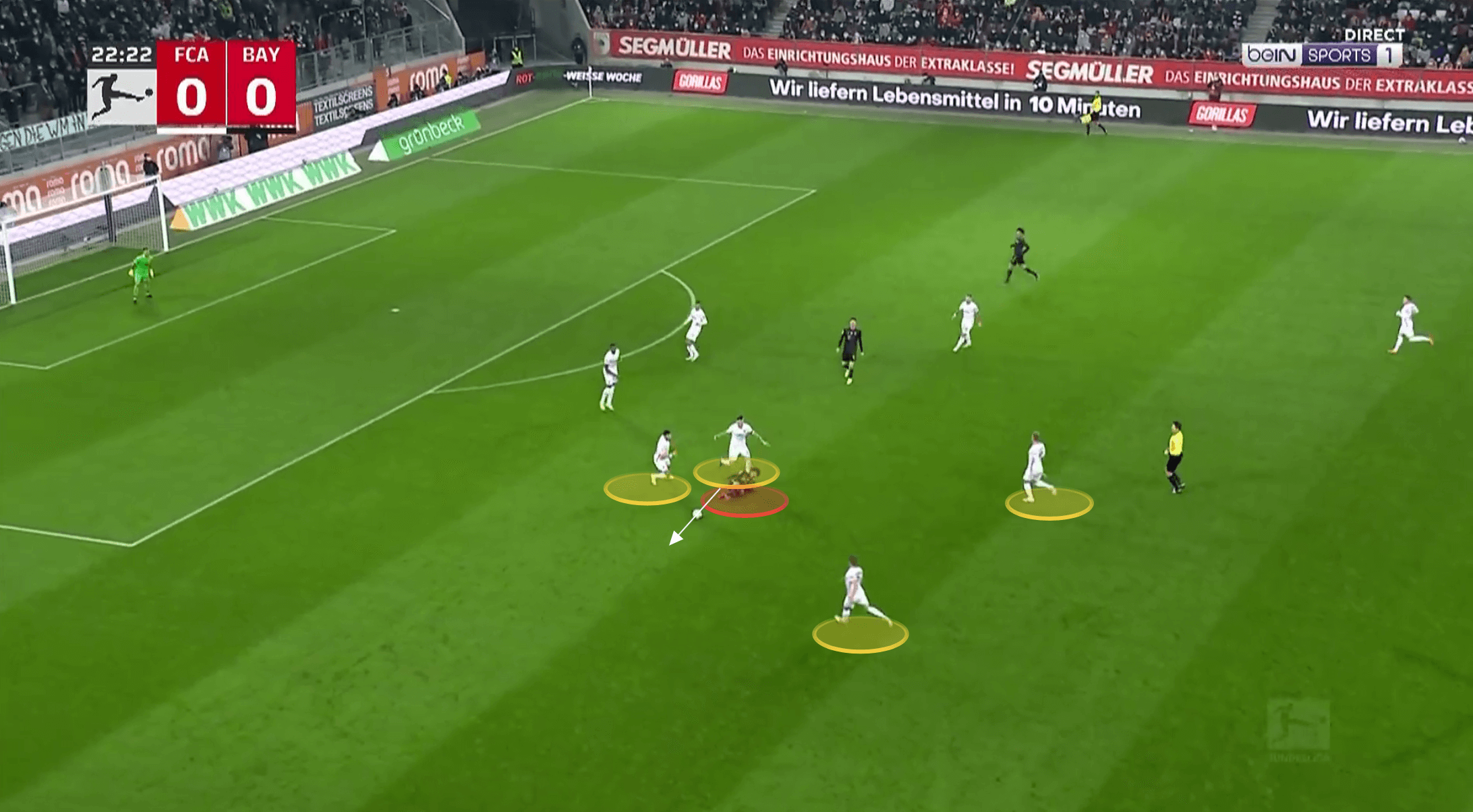 For their first goal, they won the ball back and immediately switched the ball to the opposite flank, with a sequence of safer, short passes, rather than looking to hit the long, diagonal switch of play which could have led to a turnover of possession. 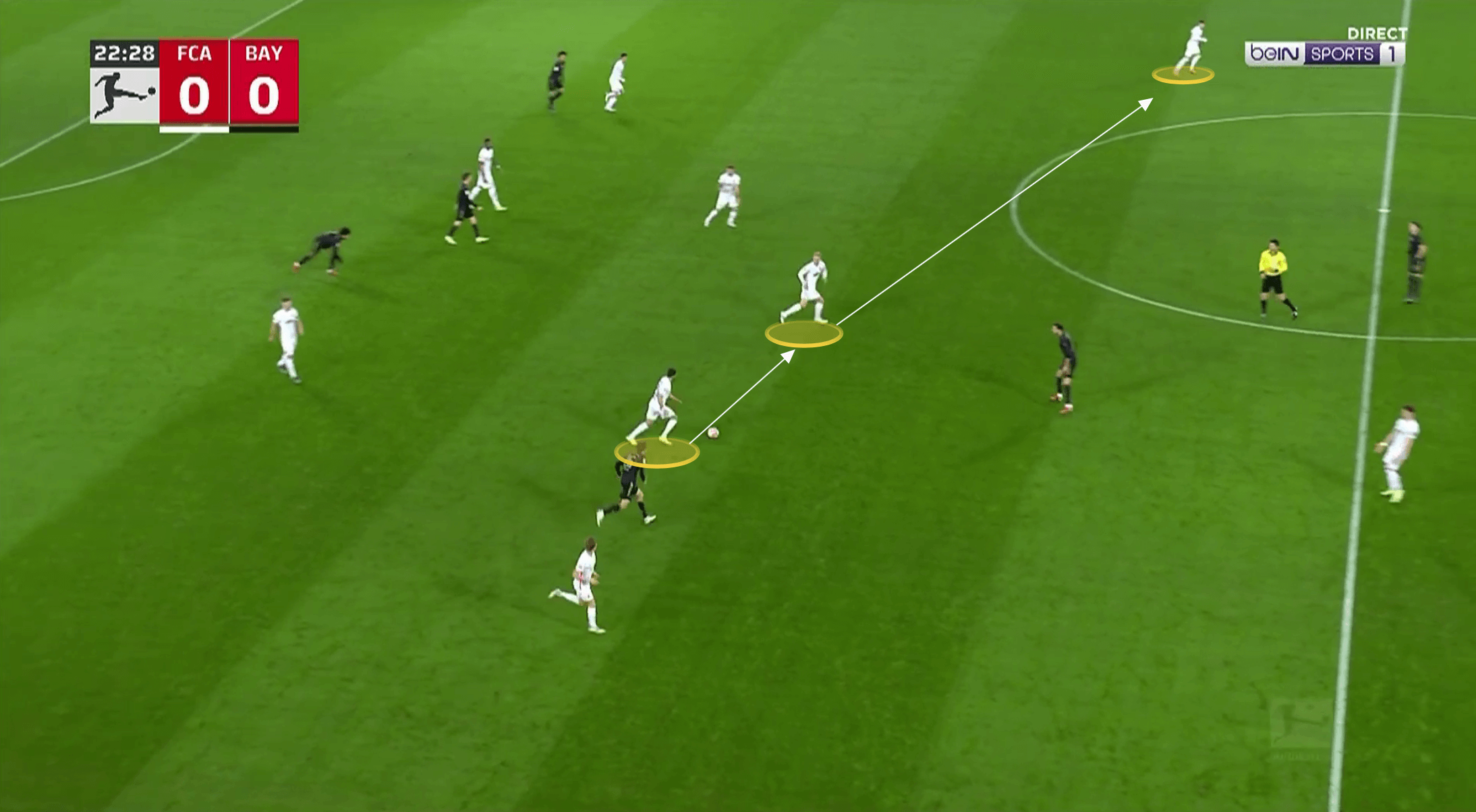 Once on the left flank, Pedersen looked to drive forward to narrow Bayern’s right side of defence and create space for Iago to overlap. The left-back’s overlaps were vital to both goals, and his cross into the area from the position shown below led to Bayern not clearing the ball properly, before Pedersen slammed the ball into the net from inside the box. 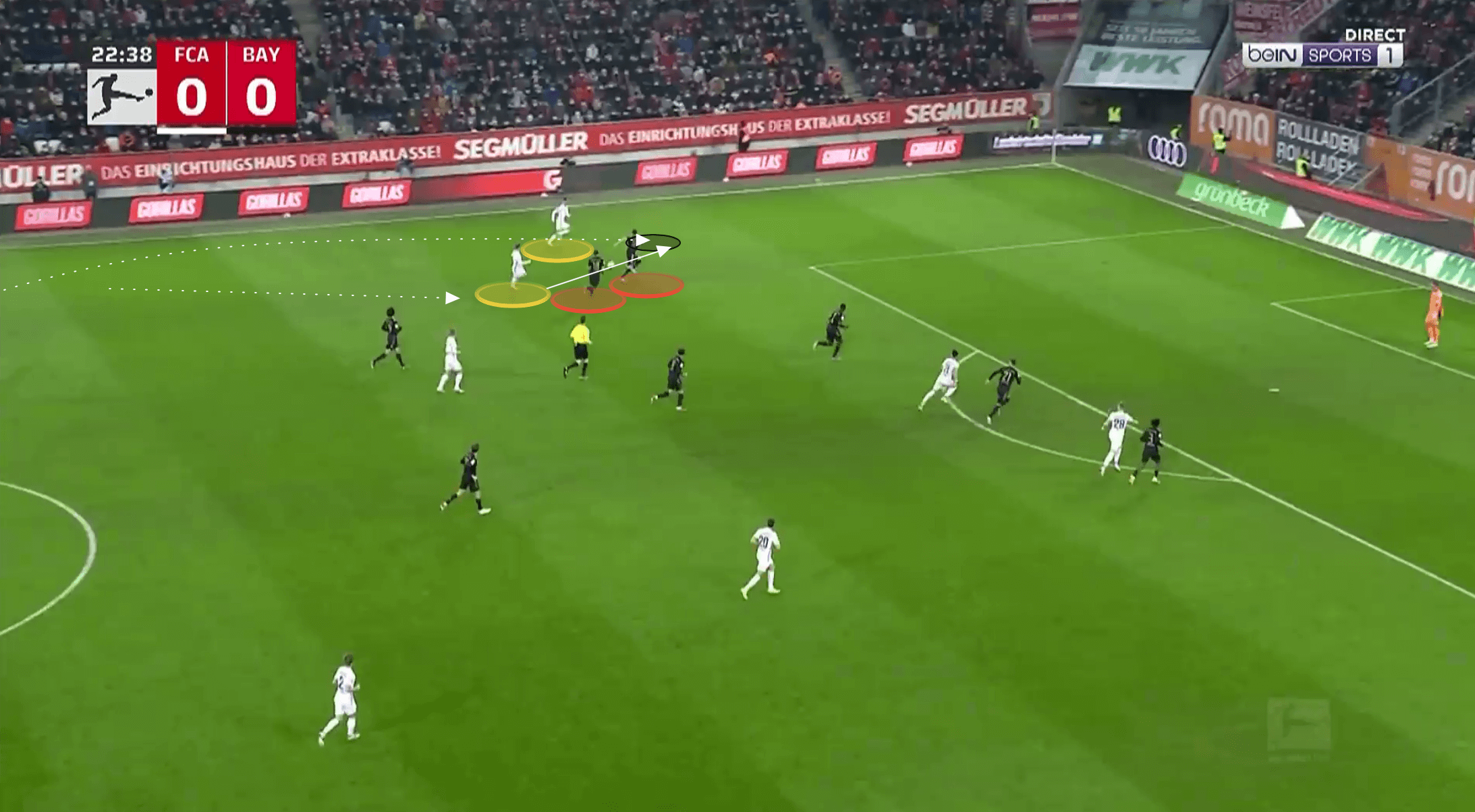 After losing possession, Augsburg were rapid to drop back into shape, and if it was possible to counter-press, they would do so. The image below shows a loss of possession in the midfield, with Augsburg’s centre-forward Zeqiri immediately dropping to counter-press whilst the wingers either side of him supported this by dropping back into shape and providing compactness to prevent Bayern from being able to play wide, away from the pressure. 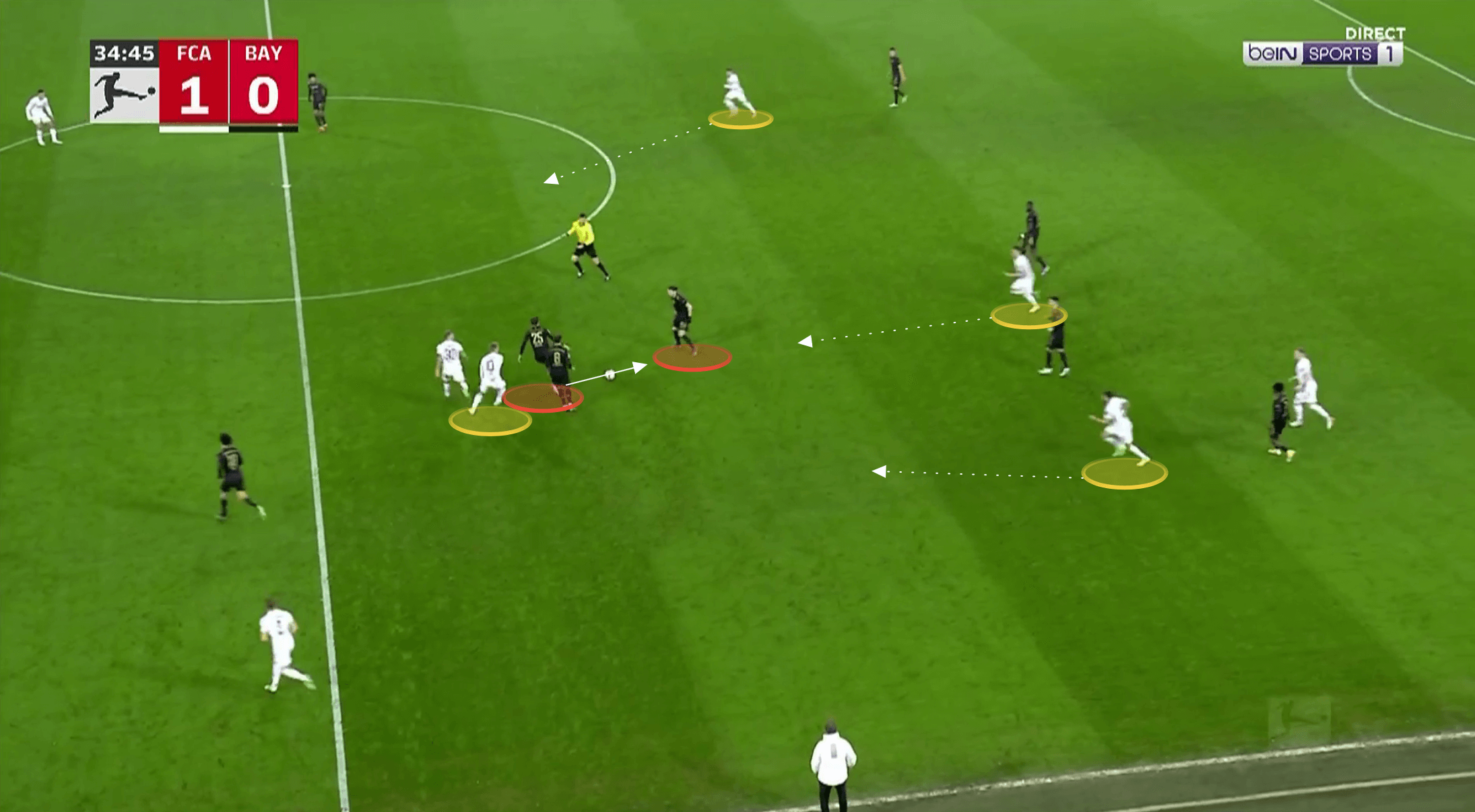 This led to an immediate regain of possession for Augsburg, with Zeqiri driving forward into the open space to begin the counter. 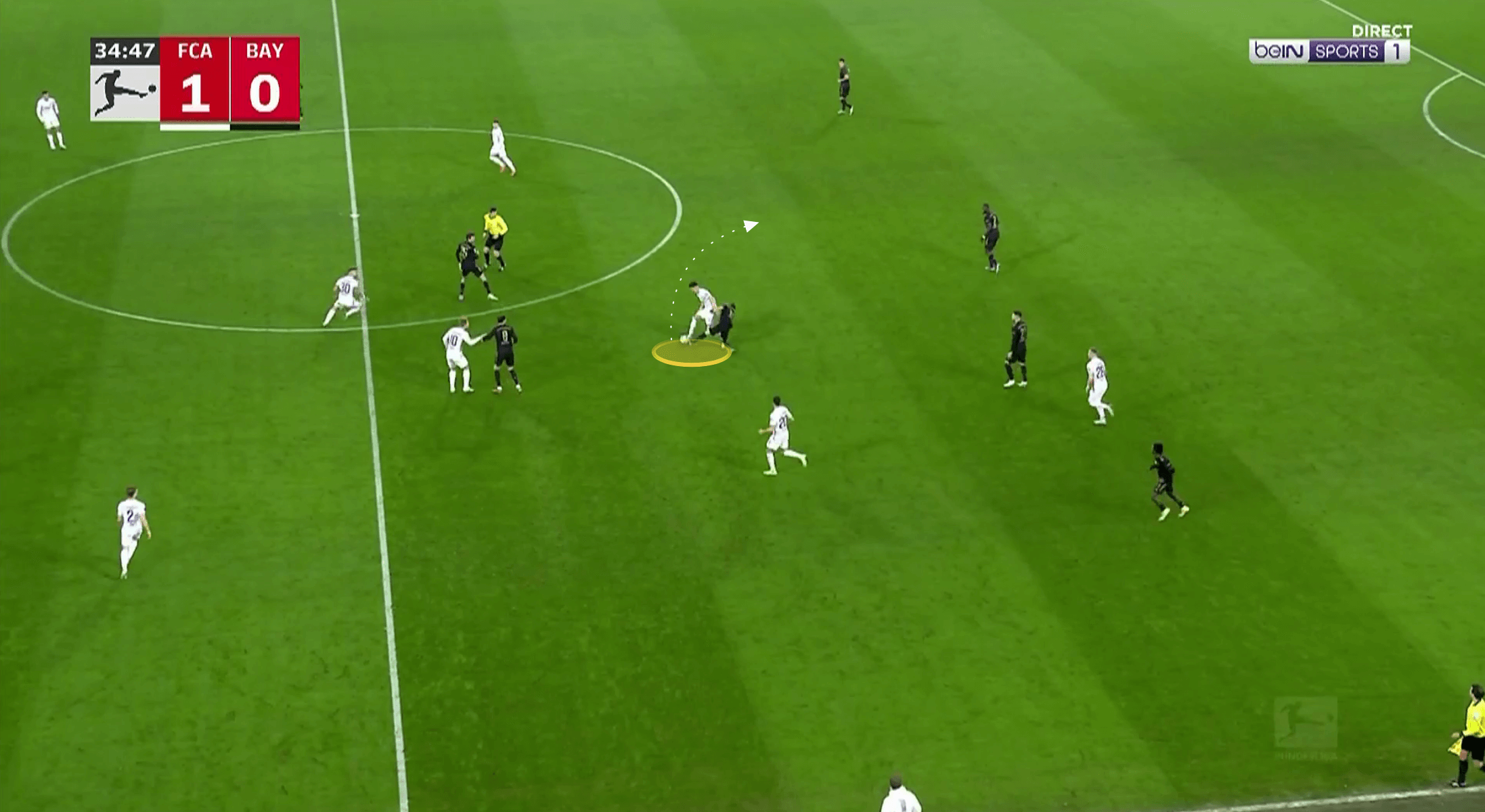 Once more we can see Iago bursting forward to overlap in this situation, with Zeqiri engaging Bayern’s defence with his dribble before simply laying the ball off out wide for his left-back to run onto. 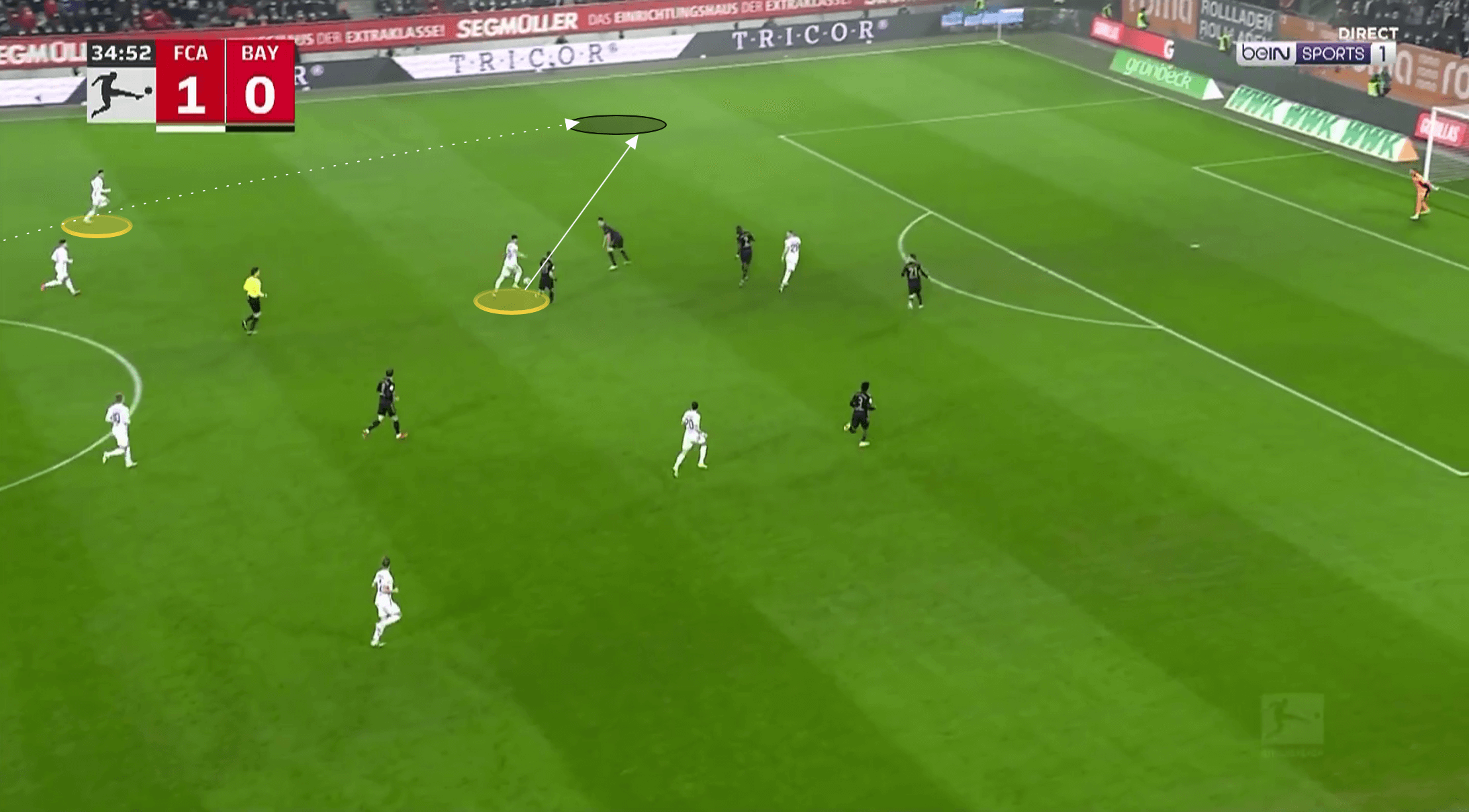 Once more Iago put in a delivery of the highest quality, perfectly picking out Hahn’s run away from his centre-back marker into the space between Hernandez and Richards to head home and extend Augsburg’s lead at the time to two goals. 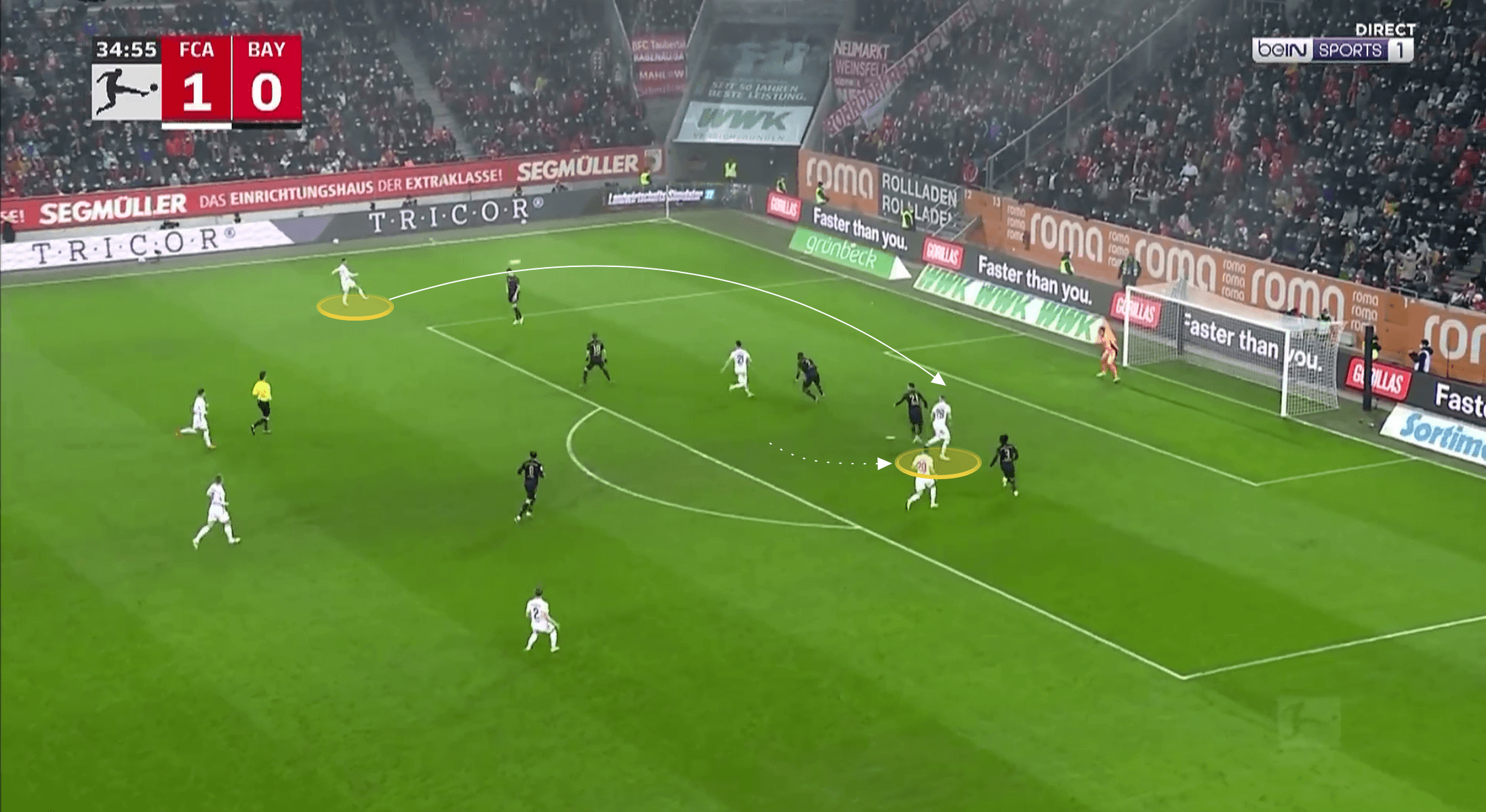 Whilst Augsburg had to defend resiliently and rode their fair share of luck, they showed immense quality as a team to defend with energy and compactness for the full 90 minutes. When going out to frustrate a team in this way you have to take any chances you create, and Augsburg did this too. Bayern will be frustrated and will know they created enough chances to win the game and with the gap closing at the top, and a fixture against Dortmund only just around the corner, they have a pressured next couple of weeks ahead of them. 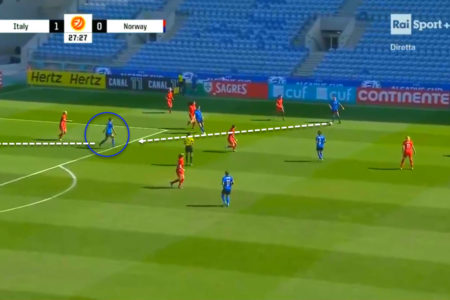 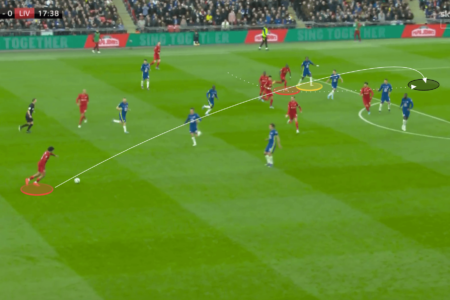 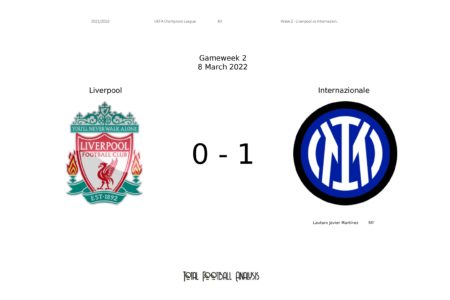