Within the last two decades, generational talents such as Marc Overmars of Arsenal, Ruud Gullit and Marco van Basten of AC Milan and Arjen Robben Bayern Munich have left their mark on the football world and will never be forgotten. Another element that should not be forgotten is where they took their first steps to prominence; the Dutch Eredivisie. Clubs such as Ajax, Feyenoord and PSV Eindhoven have all lifted European silverware, were once the team on football lovers’ lips and seen as the team to beat in Europe. Due to a significant gap in financial resources between them and the rest of Europe’s elite, the big three in Dutch football cannot currently compete at the top of the footballing table.

While times have changed regarding European Dutch supremacy, one thing has stayed the same — youth development. The Eredivisie is widely recognised for developing some of the world’s best footballers through thoughtful planning from clubs and astute coaching. In recent years, players such as Barcelona’s Memphis Depay and Frenkie de Jong have been able to propel into superstardom from their Eredivisie platform. Cody Gakpo of PSV Eindhoven has been touted as the next young Dutch star to break into one of Europe’s top five leagues and reports have tipped German giants Bayern Munich as one of many names in the hat for his signature.

This tactical analysis and scout report will cover Gakpo’s strengths and what he adds to Roger Schmidt’s impressive PSV side, while also covering possible improvements Gakpo can make to truly elevate his game.

When watching Gakpo, the first thing spectators may notice is his large size and long frame, as the 22-year-old stands at 6’2. With his size, Gakpo obtains a powerful stride when running, while also being able to hold off players with strength. This is not to suggest that Cody Gakpo is all brawn and no brains, Gakpo is intelligent on the ball regarding his decision making because of his use of scanning, which allows the young forward to survey and interpret the surrounding space. When the opportunity arises, Gakpo has a tendency to make a forward action towards the ball before suddenly allowing the ball to roll across his body. When space is not afforded to him, Gakpo has a talent for creating space for himself by making inwards and outward runs off the ball to catch opponents off-guard.

Here, PSV has just taken a throw-in and as players are exchanging passes, Cody Gakpo looks over his right shoulder in case of oncoming pressure. 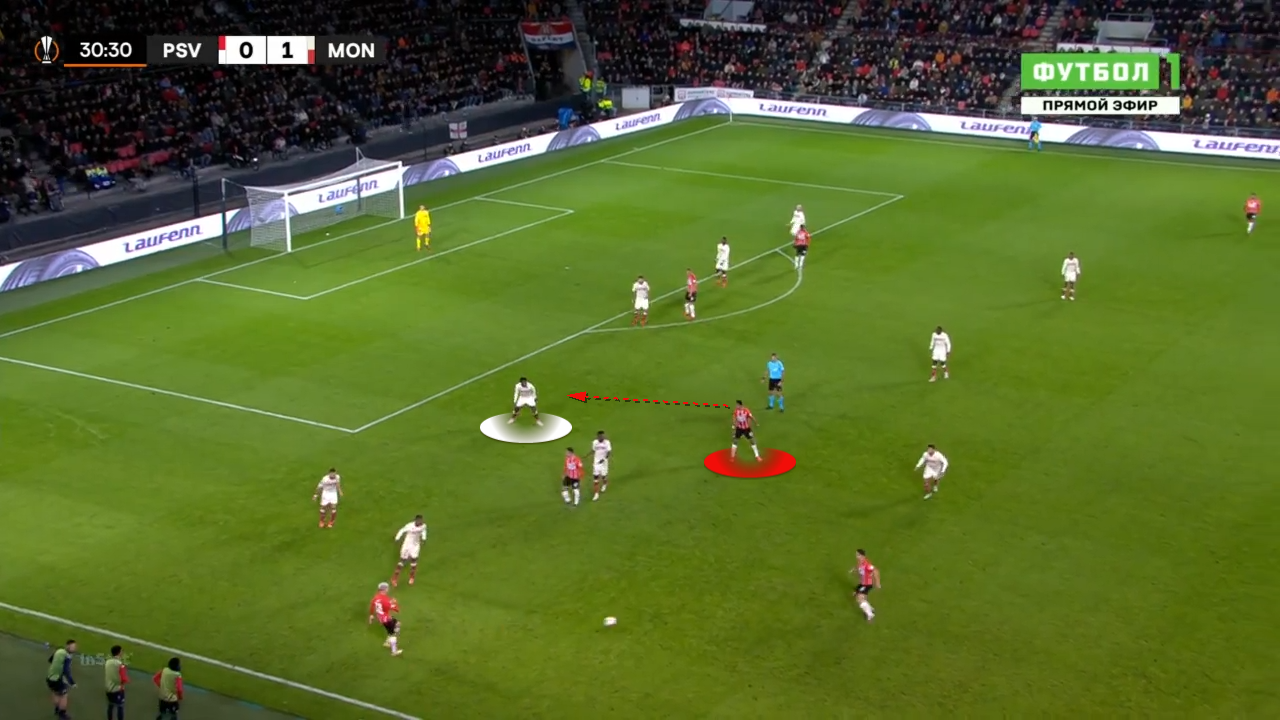 Gakpo notices Monaco’s Axel Disasi and as he is about to receive, he makes a step forward, convincing the defender he is going to the ball but allows the ball to roll across his body into the open space behind him and takes a shot on goal. 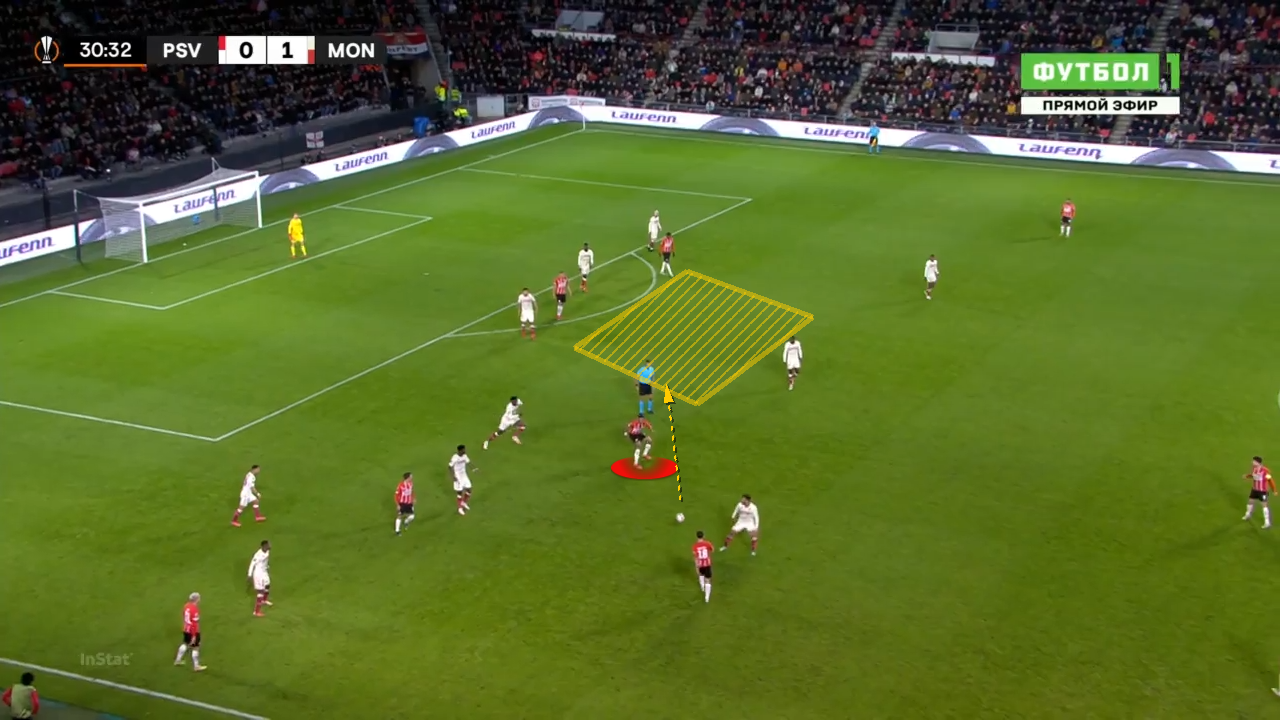 Passing and Creativity within the final third

Cody Gakpo is quite versatile within his play, as he can adopt different positions and techniques to progress play and attack. Gakpo plays as a left-winger in Schmidt’s 4-2-3-1 tactics and at times, will position himself high and wide against the byline. In other instances, Gakpo will be positioned within the left half-space and former Bundesliga full-back, Phillip Max will provide width on the left-hand side.

These variations regarding his positioning are useful as it creates unpredictability as to where he will pick up the ball, which disrupts opposition marking while also creating space for others. Whether placed in the half-space or out-wide, Gakpo’s link play is a key feature he shows. Gakpo excels in 1-2 exchanges with teammates near him and he uses this to his advantage as he is fond of laying the ball off and bursting into the box. During these types of exchanges, Gakpo showcases his composure as he is keen to move with speed, with or without the ball, but the young Dutch winger also has the capacity to know when to slow down play and keep the possession for his team.

While being able to trade quick passes with teammates and carve through defences with his off-ball movement, Gakpo can also create for others around him. So far this season, Gakpo has amassed 7 assists in 9 Eredivisie games and is showing no signs of slowing down. Gakpo is keen on slightly drifting centrally and when in this space, he can do his best work.

Here, Gakpo is in possession in the left half-space and notices striker, Eran Zahavi, in-between the opposition centre-backs. With his excellent weight of pass, Gakpo can thread the ball and create a goalscoring opportunity. 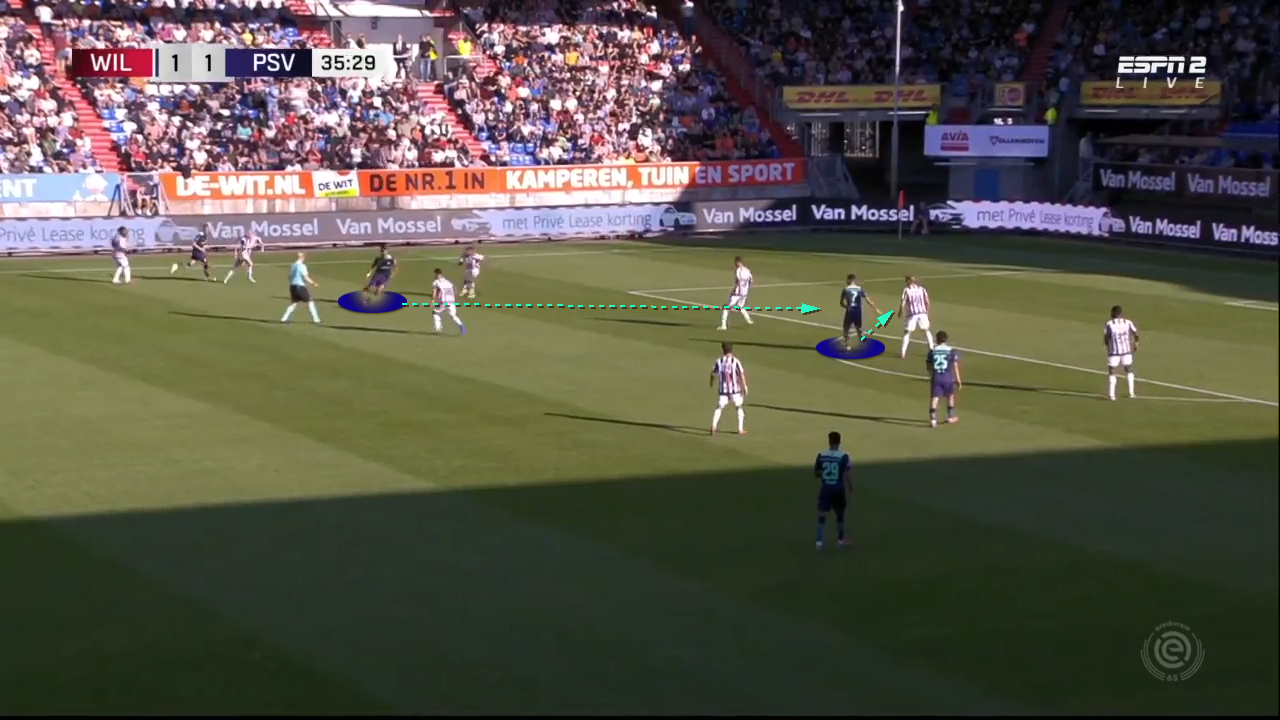 Another example can be seen against Real Sociedad, Gakpo is positioned more centrally compared to the previous example. While in possession, the Dutch wide man notices Jordan Teze on the far side, gesturing for the ball played in behind Real Sociedad’s defence. 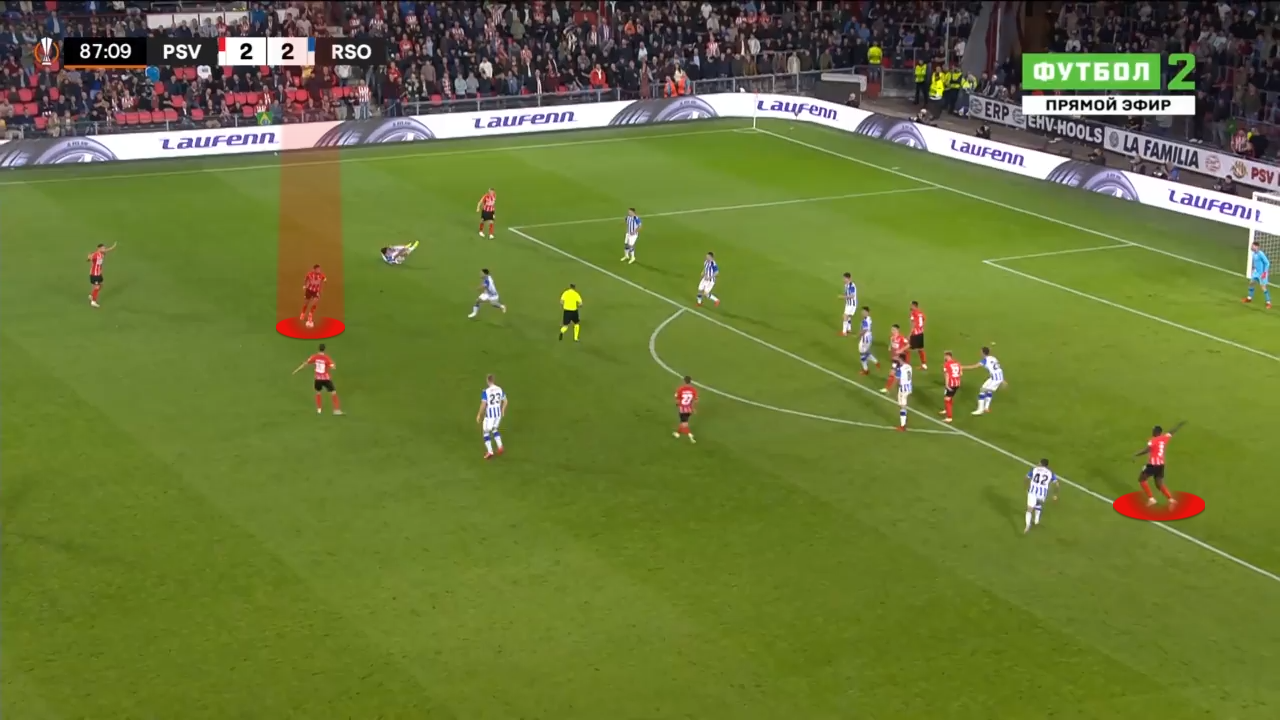 Once Gakpo notices the man and the space, he delivers a perfect ball over the top of the defence, which keeps Jordan Teze in stride. With this being said, when occupying positions out wide, Gakpo has shown crossing ability regardless of him not being a high-volume crosser, as he has only accumulated 1.94 crosses per game, which is a percentile of 51 across wingers in Europe. 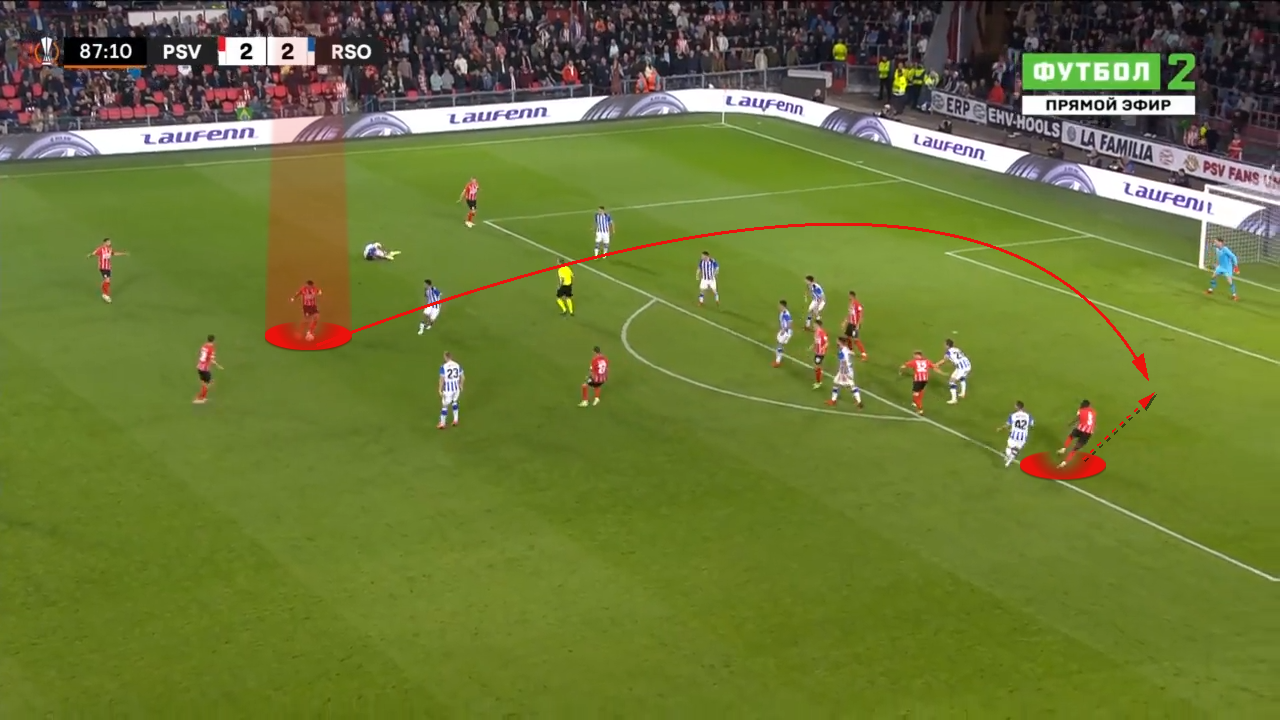 For any defender, Cody Gakpo is a hard man to stop when on the ball. The Dutchman can beat opposition players with his astute ball manipulation and dribbling skills. When attempting to take on a player 1v1, Gakpo has a variety of ways to beat his man. When attempting a dribble, Gakpo is keen on jinking one way and inviting pressure on that side to then suddenly switch and manoeuvre to the other side. In addition, Gakpo makes good use of quick and clever touches into space with the ball to get around the marker, as well as dropping his shoulder and shifting the ball in any direction.

One of Gakpo’s greatest qualities is the ability to create shooting opportunities off the dribble, and he can combine this with his superb ball-striking capability. Gakpo excels when connecting with the ball for a shot as he catches the ball sweetly and generates power when facing the goal. So far in the 2021/22 season, Gakpo has shown he can place the ball in any corner, as he has scored three goals so far, with two coming from three Europa League games he’s been involved in. Gakpo’s goal versus Go Ahead Eagles is an excellent demonstration of his ball-striking being used in difficult situations.

Mario Götze has the ball and spots Cody Gakpo running into space which could lead to a promising attacking move. 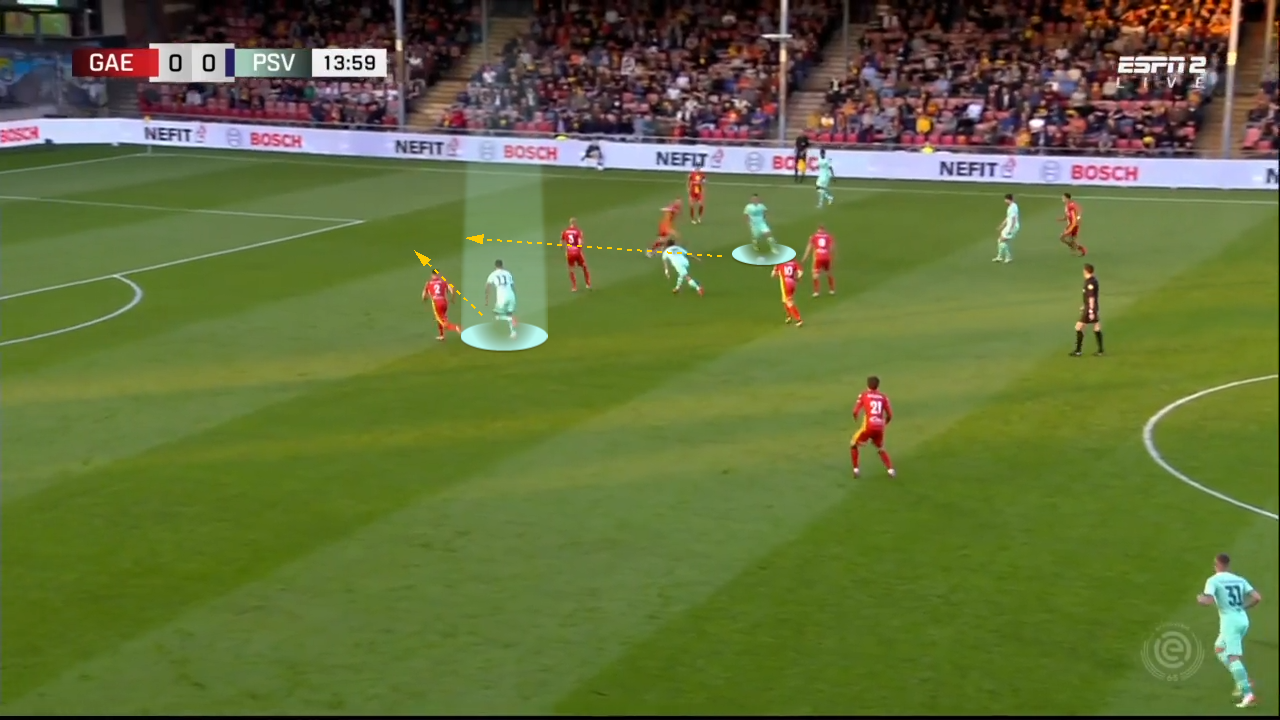 Gotze finds Gakpo’s run into space. Gakpo’s initial touch and the pressure of the defender pushes him wider than intended and disrupts his balance. Nevertheless, while unbalanced, Gakpo could still connect well with the ball and finish in the top right corner. 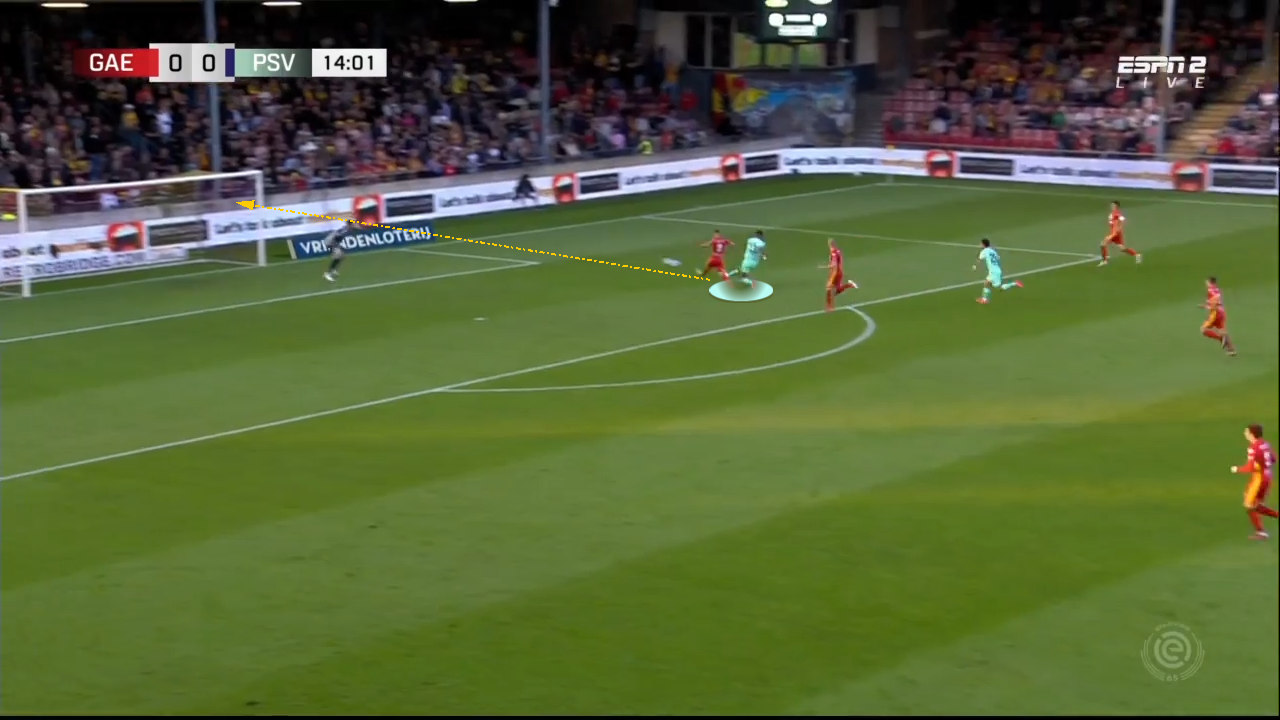 Gakpo is an aggressive and assertive runner when in possession, which is a benefit and, at other times, a detriment and something he may improve on as time passes. Gakpo looks to run at the heart of opposition defences down the centre of the pitch and in some instances, he may lose the ball when battling through a congested area. The young winger at full speed is a lot to handle, and his sprints can create space for teammates as he attracts the opposition towards him.

Here is an example of Cody Gakpo combining all three qualities within one instance. The Dutchman receives the ball high and wide on the left-wing and is immediately opposed. 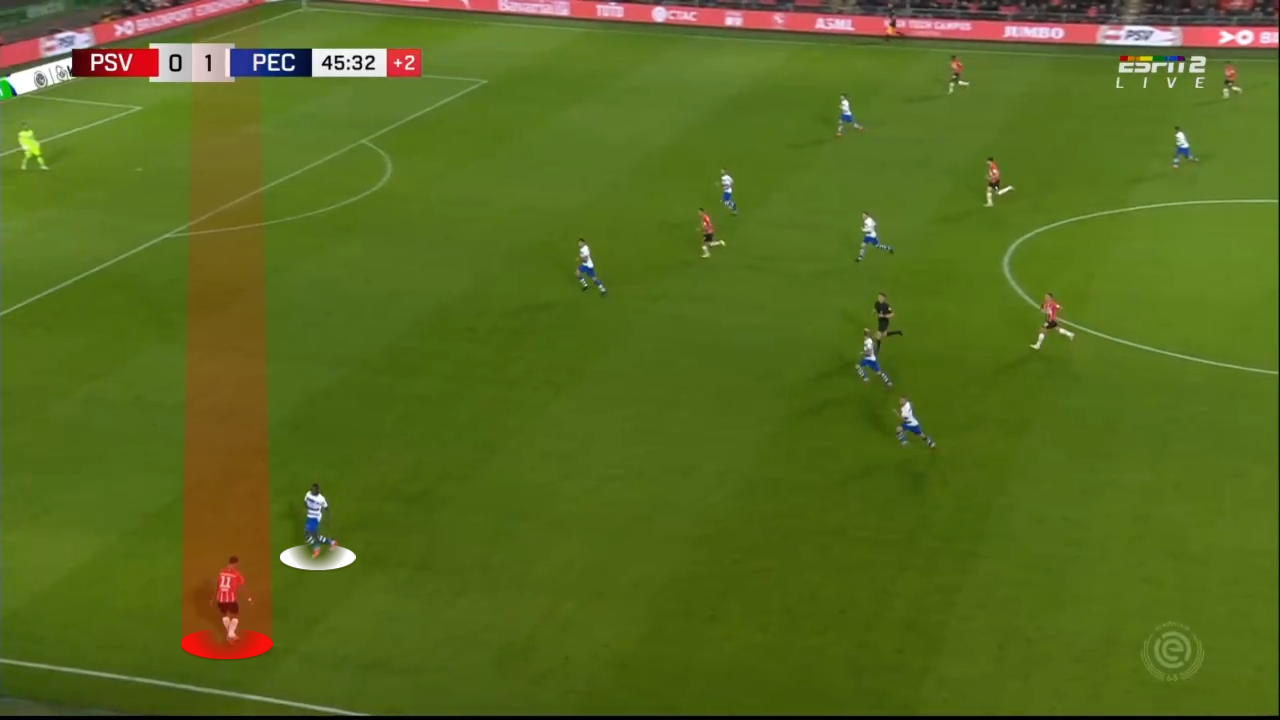 Cody Gakpo does well in this situation to invite pressure, then suddenly faint inside, and progress play. 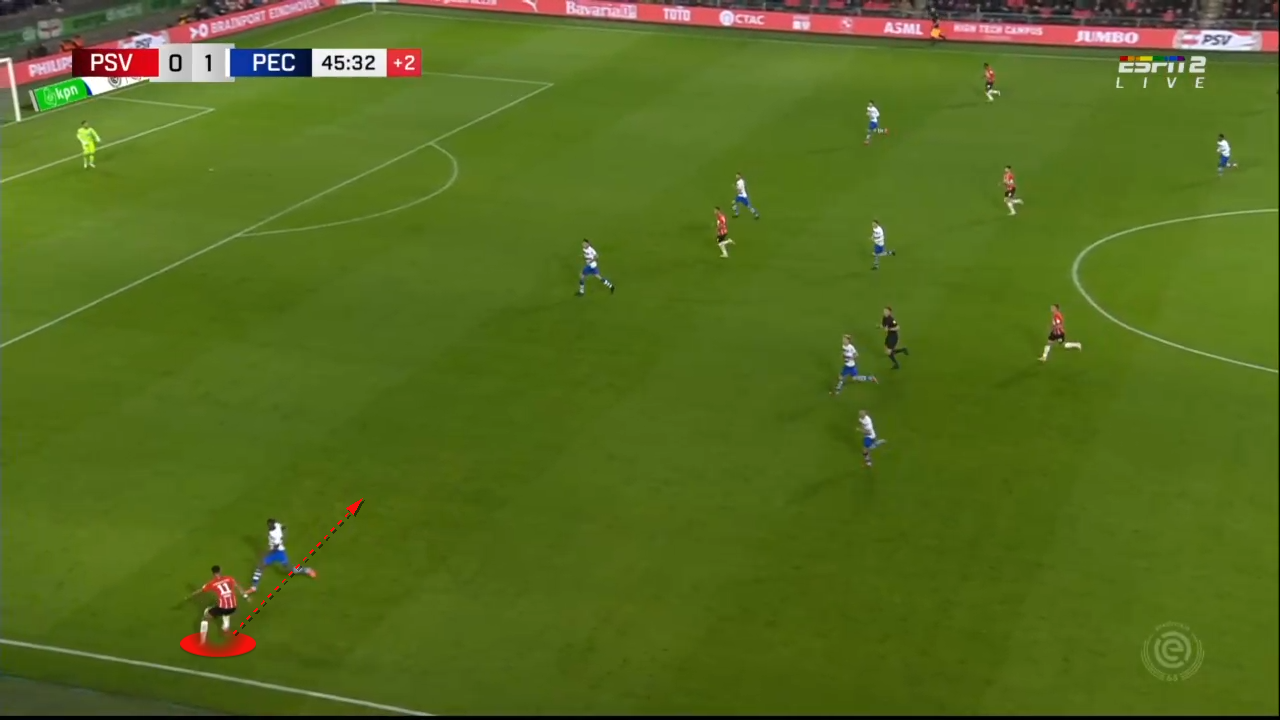 Now patrolling inwards, Gakpo aims to run into space ahead of him with little concern for defenders ready to close that space. 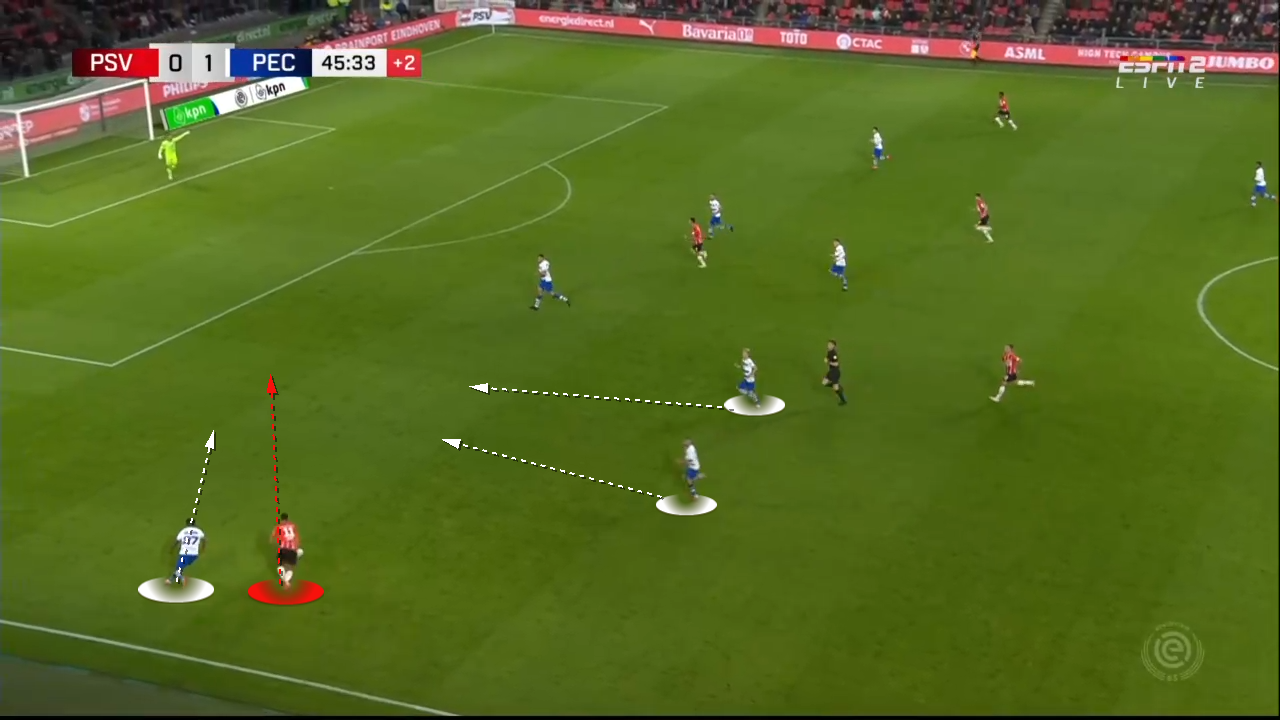 The PSV winger is closed down by three opposition players but in this condensed space, he can again shift right into the space and unleash a shot from outside the box 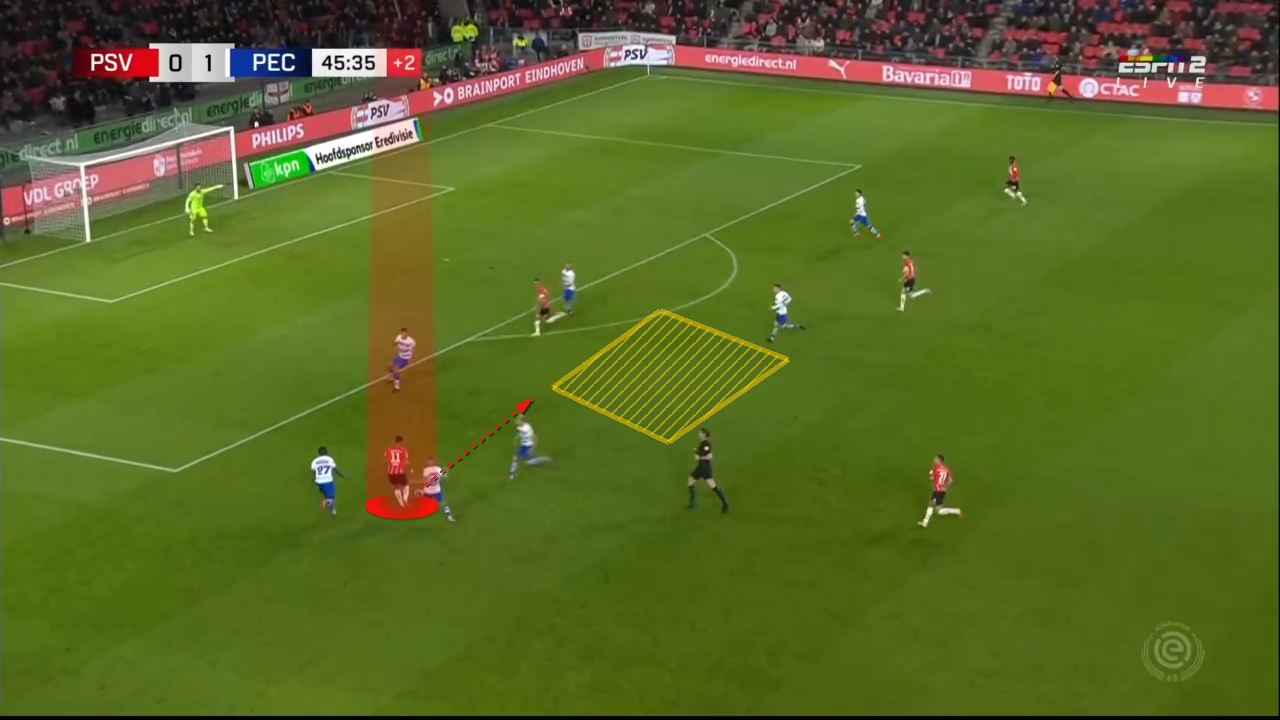 The Dutch Eredivisie is synonymous with talented players and teams that are woven into the fabric of football. At the tail end of 2021, young Cody Gakpo is tipped to be the next big thing to come out of The Netherlands — and for good reason. Gakpo is versatile, unpredictable and combines skills that make him hard to mark. His spatial awareness and instinctive ball striking off dribbling are what set the young man apart from his other counterparts within the league and it is only a matter of time until he moves on, takes off and performs on the highest stage for the highest bidder.