When we think of leagues that specialise in identifying and recruiting young talent from Africa, there are a couple of nations that stand out. The French and Belgian leagues, for example, historically were landing spots for young talented players coming out of Africa, although these players tended to come through some of the well-established academies on the continent. In recent seasons, the Red Bull clubs, and specifically RB Salzburg, have developed a reputation for intelligent scouting across Africa with some high-profile success stories in recent years.

There is one other landing spot for exciting African talent that can be overlooked at times. The Swedish Allsvenskan has, over recent seasons, developed some fantastic young talents and there are clubs in that league with close links to academies and agents with access and knowledge of the African markets. This season has seen the definite breakthrough of one of the most exciting young talents in Swedish football with the Zambian winger Edward Chilufya impressing for Djurgårdens as the Stockholm club look to challenge for the Swedish title.

Chilufya is a 22-year-old winger who first moved to Sweden to join Djurgårdens in 2018 when he left Mpande Youth in his native Zambia. Although Chilufya made his first-team debut for the club in 2018, it is this season that has seen the young winger add consistency to his undoubted ability and potential; this has seen his output improve drastically.

He is predominantly right-footed but he is comfortable and capable of playing anywhere across the front three and he has even spent some time playing as a centre forward. He is a dynamic and explosive ball carrier who has the ability to burst past an opposition defender or suck them in with a quick change of tempo before producing a trick that creates separation and allows him to move away from the defensive player. He is listed at 171cm | 5’7” and he uses his low centre of gravity to move past defenders. 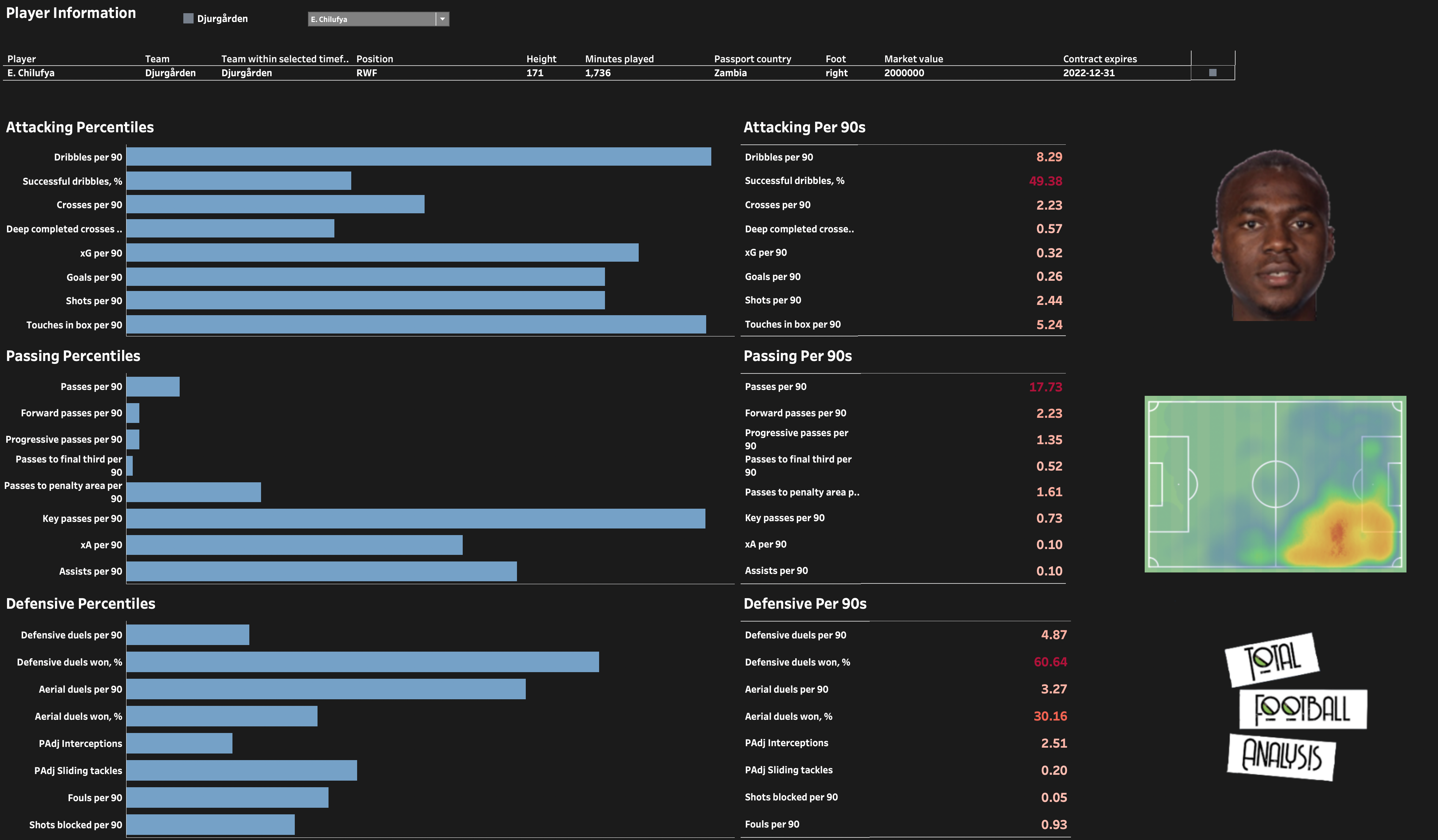 Here, we see the data profile for Chilufya across the 2021 season, the Swedish domestic season runs from March to November every calendar year to account for the weather in Sweden. From a data perspective, he stands out in terms of his ability to carry the ball and for his chance creation, both for himself and for teammates.

At the time of writing this article, Chilufya has played 1736 minutes in the Allsvenskan. He is averaging 8.29 dribbles per 90 with 2.44 shots per 90 and 5.24 touches in the opposition area per 90. These underlying attacking metrics are impressive but his overt numbers are also strong with 0.26 goals per 90 from an xG per 90 of 0.32.

As a player, Chilufya is positionally flexible and this allows his coach to use him in different positional slots. For the most part this season, we have seen the young Zambian positioned on the right-hand side of the attack, although he has also featured on the left-hand side and even centrally. This versatility also extends to in-game and we often see him position himself in different positional slots depending on the position of the ball and the opposition defenders. This is particularly true when the opposition are in the established attacking phase when we tend to see Chilufya maintaining a high position in order to be ready to receive the ball when his side regains possession.

He is a dynamic dribbler who can maintain and protect possession when he is pressed aggressively but he can also draw defenders in and then burst past with pace and power to attack space behind the defensive player. 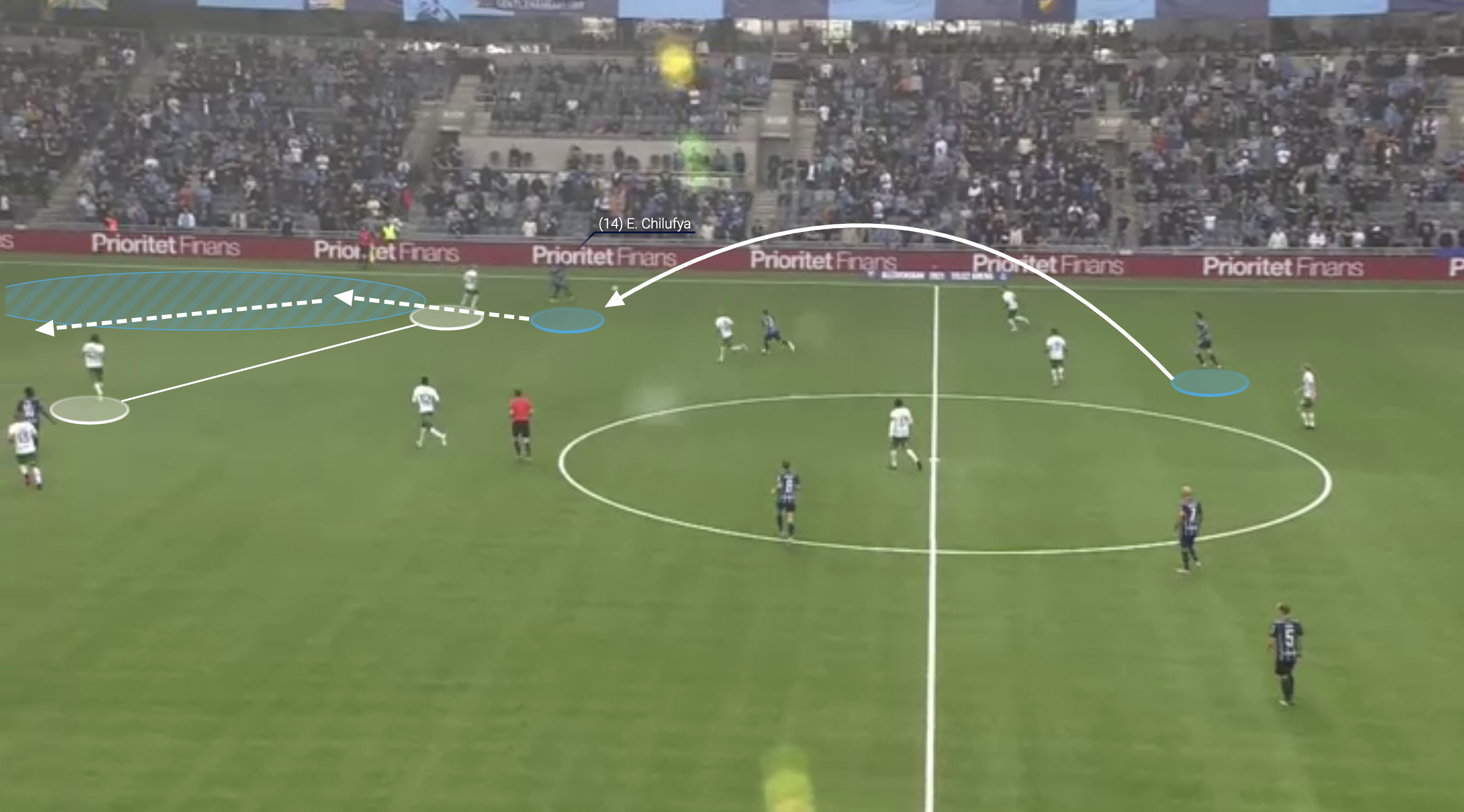 As this season has progressed, we have seen more and more opponents sitting off of Chilufya and allowing him to receive the ball in space. This is a defensive reaction that we often see defenders take against players who excel in 1v1 situations. They are afraid to get too close in the knowledge that the attacking player can receive and quickly shift and manipulate the ball before bursting past them. Instead, defenders will give a cushion to ensure that the opposition player cannot receive and turn them before attacking the advanced areas.

We see this above, as the defender has given himself a cushion as the Djurgårdens defender looks for a direct pass to access Chilufya. As the Zambian international receives the ball, the defender looks to close the gap and engage the ball. Chilufya, however, takes one touch to control the high ball before flicking it around the side of the defender and using the defensive player’s momentum against him as he sprints past and attacks the space in behind the opposition left-back. 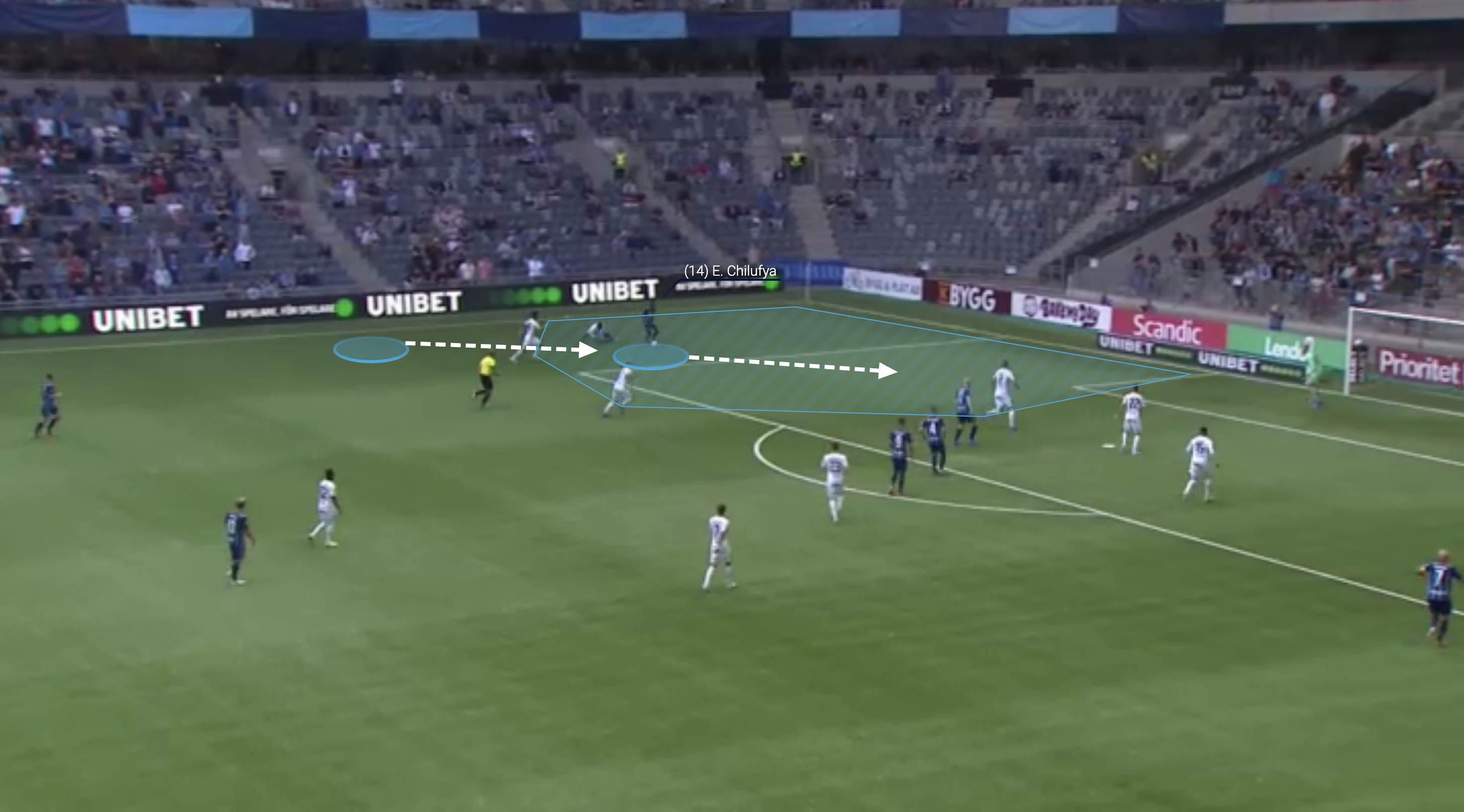 This time, we see an example when Chilufya is positioned on the left-hand side as he takes possession of the ball. When the attacking spaces are congested, Chilufya likes to position himself wide and almost on the touchline, this is a deliberate piece of movement and positioning as it forces the opposition fullback to come out to cover his threat. If the opposition then do not provide cover and balance for the fullback, then the Zambian can take possession and attack the defender 1v1.

This is what happened here as Chilufya took possession and went past the defender at speed. Because of the spacing in the opposition defensive structure, he was then able to attack into the penalty area before taking a rash shot at goal instead of looking for an opportunity to pull the ball back.

Such is the attacking threat that Chilufya possesses, he naturally pulls opposition players closer to him and this, in turn, creates little pockets of space that his teammates can look to occupy in the opposition half. As mentioned above, we have started to see the opposition defenders give Chilufya a cushion of space as he receives possession of the ball and the Zambian forward is versatile enough to use this little bit of space to effectively receive the ball and then look for passing options as opposed to always looking for a dribble. 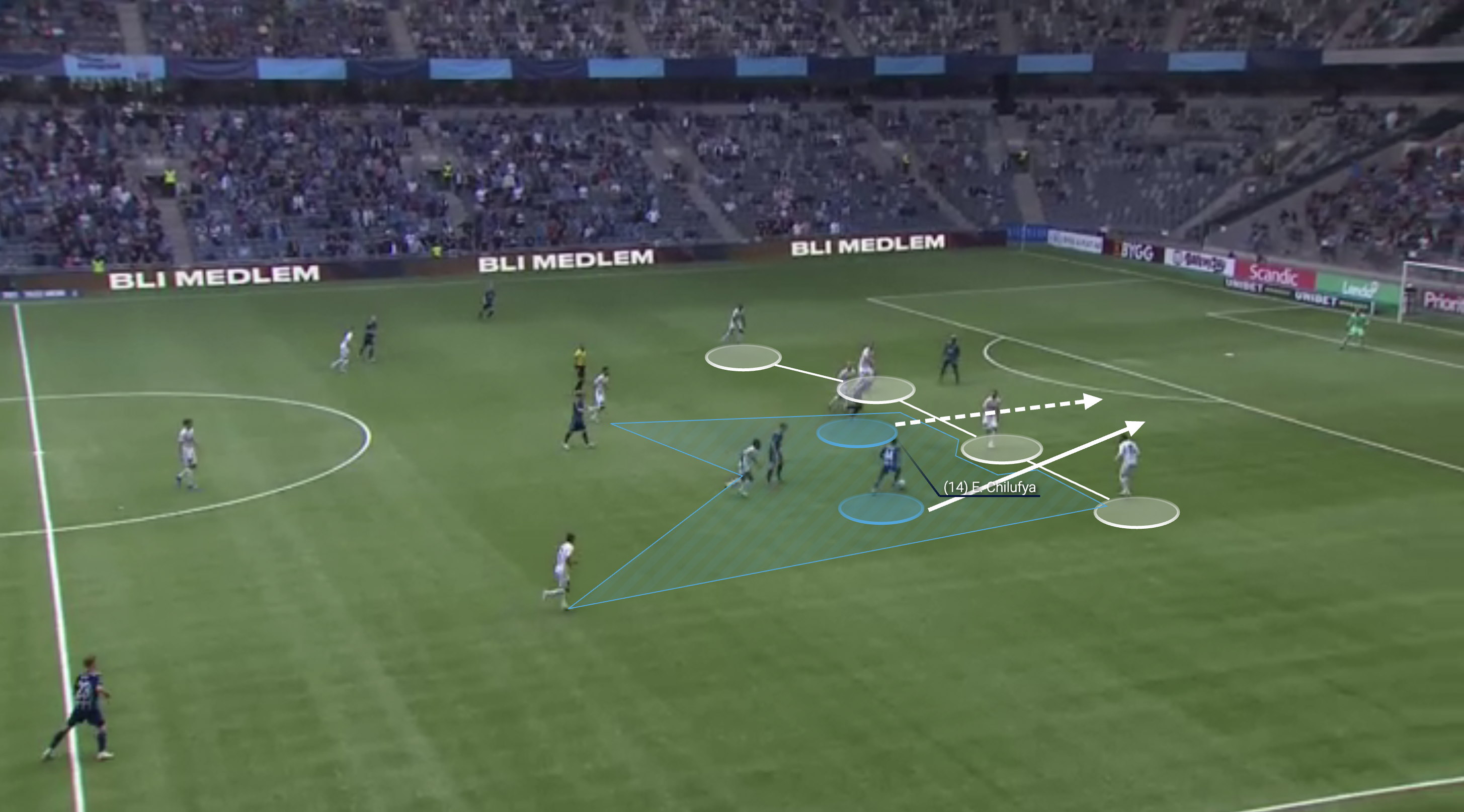 This example is captured just after Chilufya has taken possession of the ball in transition. As he receives the ball, the opposition have given him a cushion again and you can see highlighted just how much space the Zambian attacker has as he turns on the ball to face goal.

As he turns, there is an attacking player well offside but a second teammate is timing his movement well to break the defensive line with a vertical run between the two central defenders. In previous seasons, Chilufya would still have looked for an opportunity to dribble in these situations but he is definitely maturing as a player. Instead of carrying the ball, he times and weights his pass perfectly to release the attacking player into space behind the defensive line. 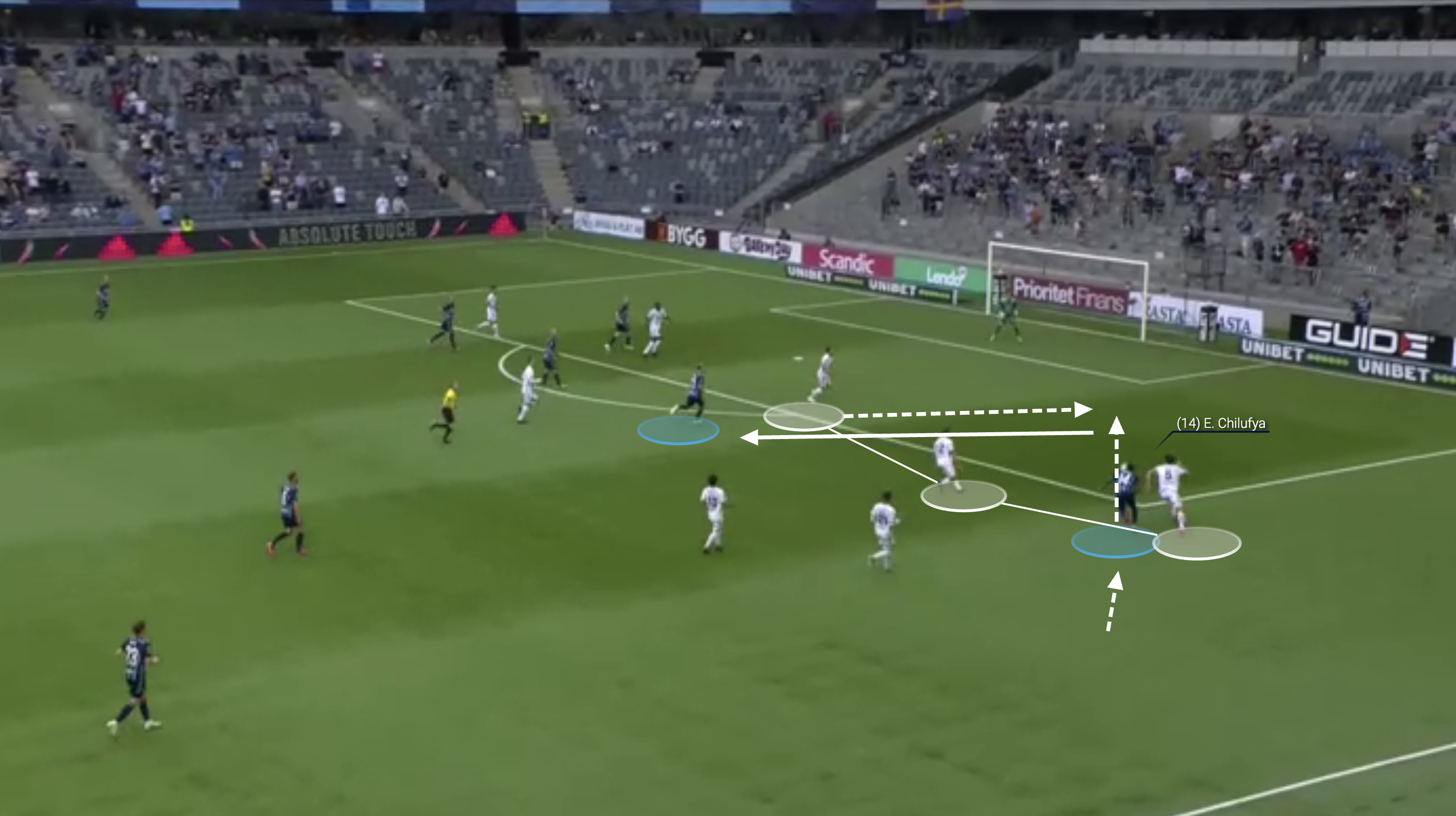 Here, we see Chilufya moving in possession of the ball and finding an angled run that accesses the corner of the penalty area. He had received the ball initially on the outside of the defender but he has the capacity to attack the opposition defender on the outside or the inside and in this instance, he makes a diagonal movement inside and attacks aggressively towards the penalty area.

As he does so, an opposition central defender is forced to come across to meet the threat and this creates space centrally. Again, in previous seasons we might have seen Chilufya look to force a shot but in this instance, he cuts the ball back intelligently to a teammate who is able to score in the far corner.

As well as being creative in front of goal and capable of finding passing angles when moving at speed in possession of the ball, Chilufya also carries a significant goal threat. He is dangerous when moving at speed towards the penalty area and he has developed his ability to shoot quickly and with minimal backlift. This ability makes it very difficult for opposition defenders or goalkeepers to know when the shot is coming. He is capable of shooting with power or finesse and his accuracy has improved greatly over the course of the season. 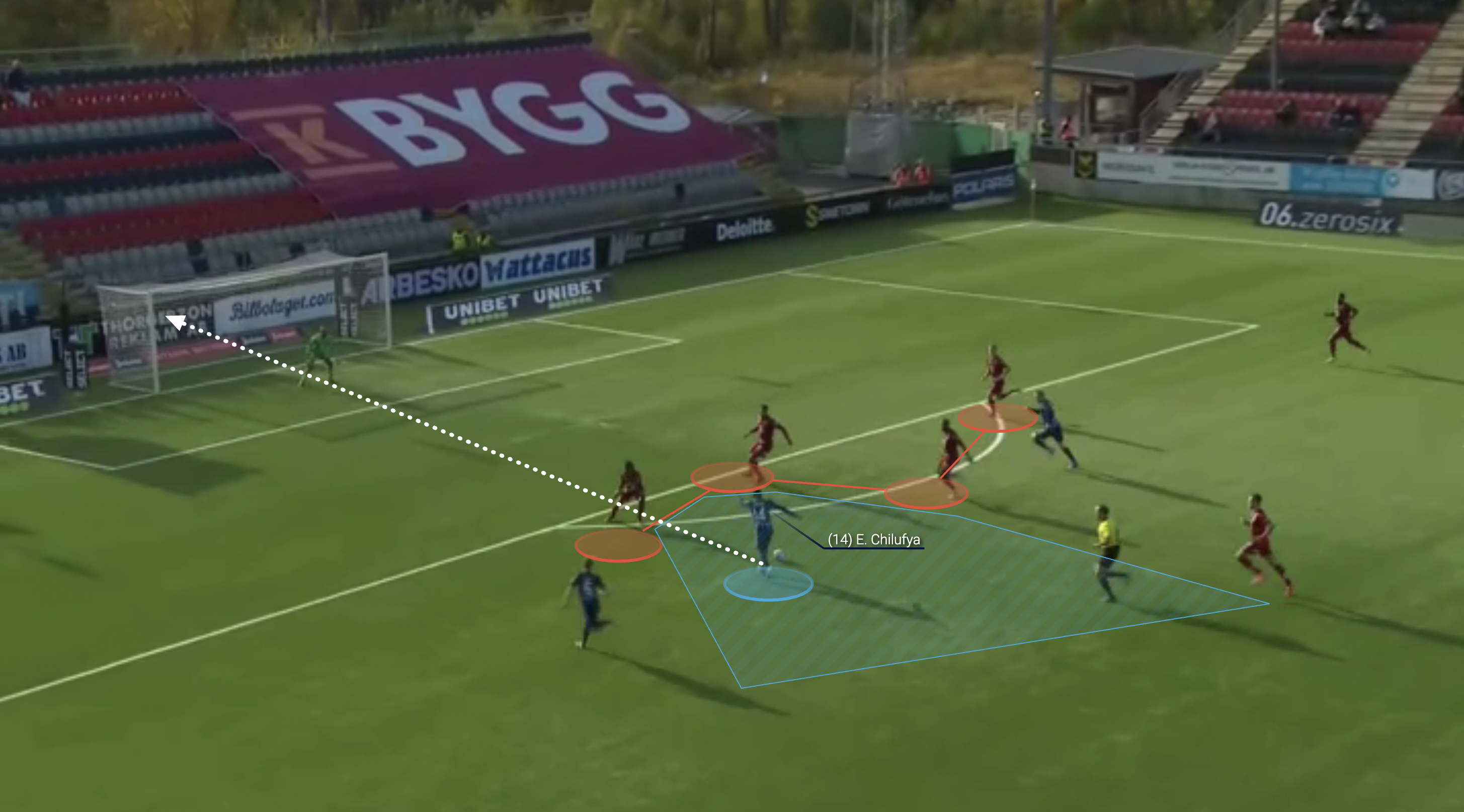 Here, we see what amounted to a stunning goal from Chilufya. Once again, when he received the ball he was in an immediate pocket of space as the defenders allowed him a cushion. Even as the wide player turns to face the goal, the defenders look to drop back to protect the penalty area as they believe that he will look for an opportunity to dribble through the defensive line.

Instead, he simply sets himself and unleashes a shot with power and direction into the top corner of the opposition goal. 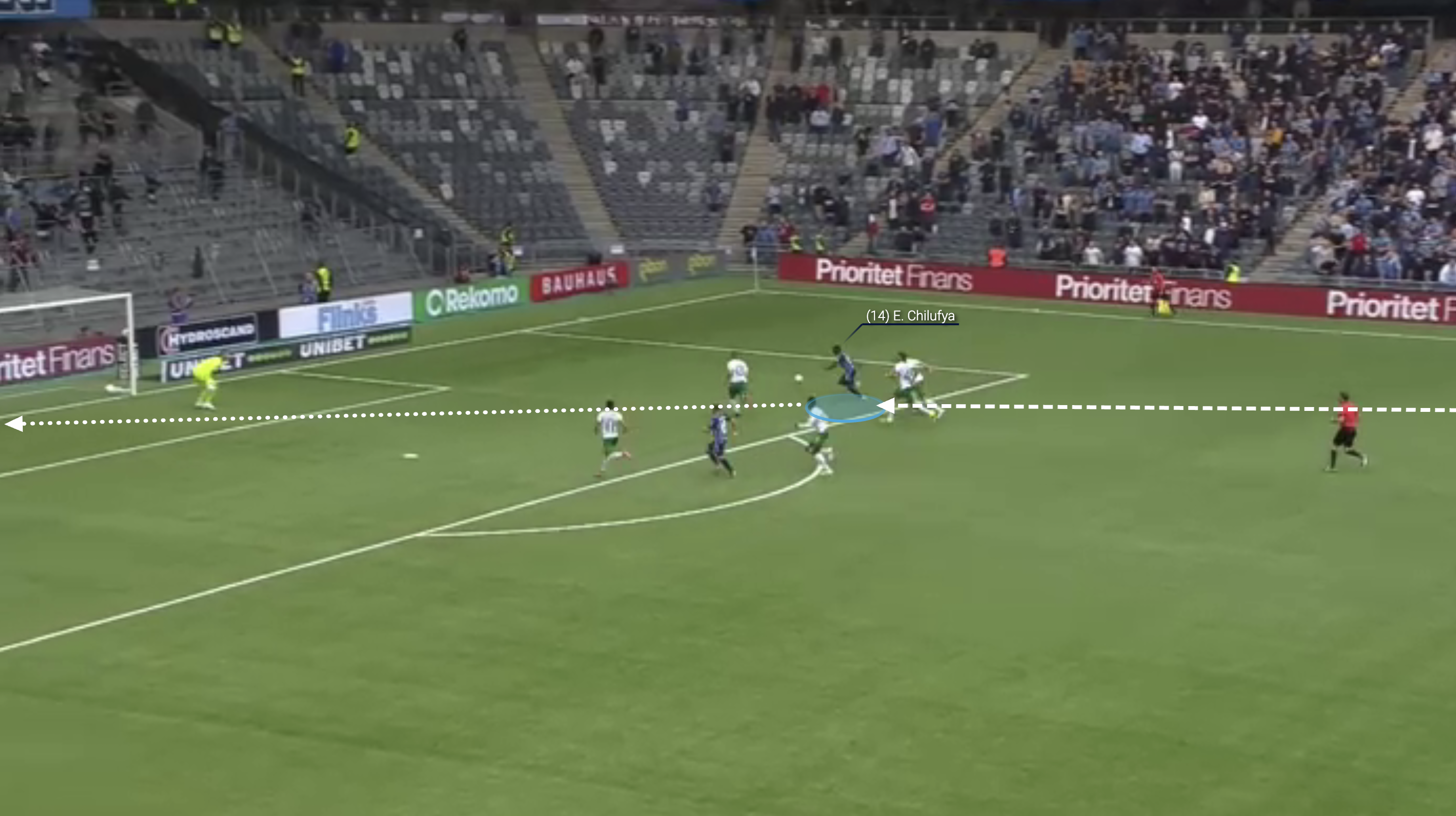 This time, Chilufya was forced to work harder to create a goalscoring opportunity for his side, as he scored a remarkable solo goal. He was positioned high and in the half-space as the ball was cleared high towards him. As the ball bounced, the defender found himself caught underneath the ball and Chilufya was able to spin him. He was then faced with a second defender but he went past that player with relative ease.

Now, as you can see in the image he was surrounded by opposition defenders but he was still able to arrow a powerful shot across the face of the goalkeeper to find the bottom corner of the goal.

At 22-years-old, Edward Chilufya is still a couple of years away from reaching his peak years and he appears ready to make a move now to a more competitive league. His skill set appears ready-made for the Dutch or French leagues but I would not be surprised to see him make a move to the English game once he qualifies for a work permit. He is under contract until the end of 2022 and I would expect to see Djurgårdens look to cash in on his talent instead of holding the player and risking losing him for a free. 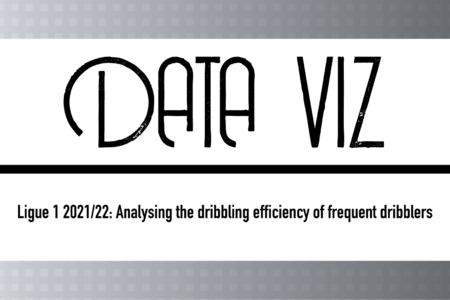 Ligue 1 2021/22: Analysing the dribbling efficiency of the most frequent dribblers in the league