Thursday night saw PSV Eindhoven host AS Monaco in the third game of Group B in the Europa League. Going into the game both teams were on four points having both picked up wins against Sturm Graz and draws against Real Sociedad. Whilst PSV enjoyed most of the changes in the game, they failed to make it count with Monaco snatching all three points late thanks to substitute Sofiane Diop. This tactical analysis will provide an analysis of the main tactics used by both sides and how they impacted the game.

For this game, PSV stayed in their usual 4-3-3 formation, in goal stayed Drommel with Max, Obispo, Ramalho, and Mwene making up the back four. Van Ginkel and Boscagli were being deployed as a double pivot in midfield with former Borussia Dortmund man Mario Götze playing more advanced in a number 10 position. Gakpo was used on the left-hand side and Madueke on the right with Vinicius down the middle, Notably, PSV manager Roger Schmidt left out prolific goal scorer Eran Zahavi.

Monaco, who have had a mixed start to the season in Ligue 1, utilized a back five for this game, German youngster Nubel, on loan from Bayern Munich, remained in goal with the back five of Aguilar, Disasi, Maripan, Badiashile, and Henrique deployed in front of Nubel. In front of the back five were Volland, Fofana, Tchouameni and Jean Lucas. Although on paper it looks like a 5-4-1 in possession it was more of a 5-2-3 with Volland and Lucas pushing higher to create a front 3. Finally like Schmidt Monaco manager, Niko Kovac left out main goal-scoring threat Wissam Ben Yedder in replacement came in Boadu. 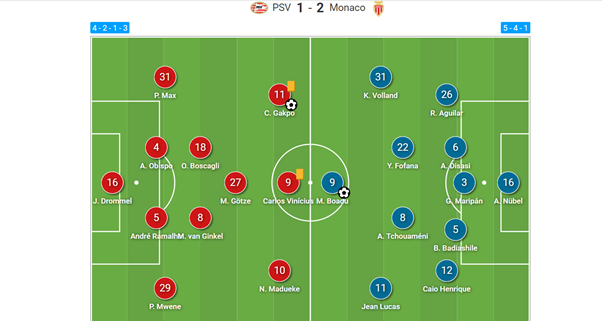 While in possession Monaco often looked to progress the ball quickly using direct and vertical passes to progress them up the field with pace and precision. This differs from the approach of PSV who looked to use short passes to keep the ball and patiently work the ball up the field. In possession, Monaco would push their wing-backs high and wide. They also looked to pass directly either into the feet of Boadu or beyond the first press into the two midfielders. This allowed Monaco to get the ball into the mid or final third quicker and in turn, get the ball to their attacking players. On several occasions, we saw this with Maripan playing the ball beyond the press into the feet of the midfielders as shown below. With the below Pass Maripan has beaten the first press and got the ball beyond the midfield block. The key feature of this pass is the fact it takes 6 PSV players out of the game.

Here you can see this pass results in a four vs four situation and the potential for a dangerous attack to form. Although the attack fizzled out into a lame effort from Lucas, it was a sign of more to come from Monaco.

This was also the passage for Monaco’s first goal. Here we see the same setup from Monaco, the three centre-backs are covering the width of the box with the wingbacks pushed higher. Maripan plays the ball into Boadu who isn’t even in the picture yet.

This allows Boadu to set the ball with his first touch and for Monaco to work the ball to the left-hand side. 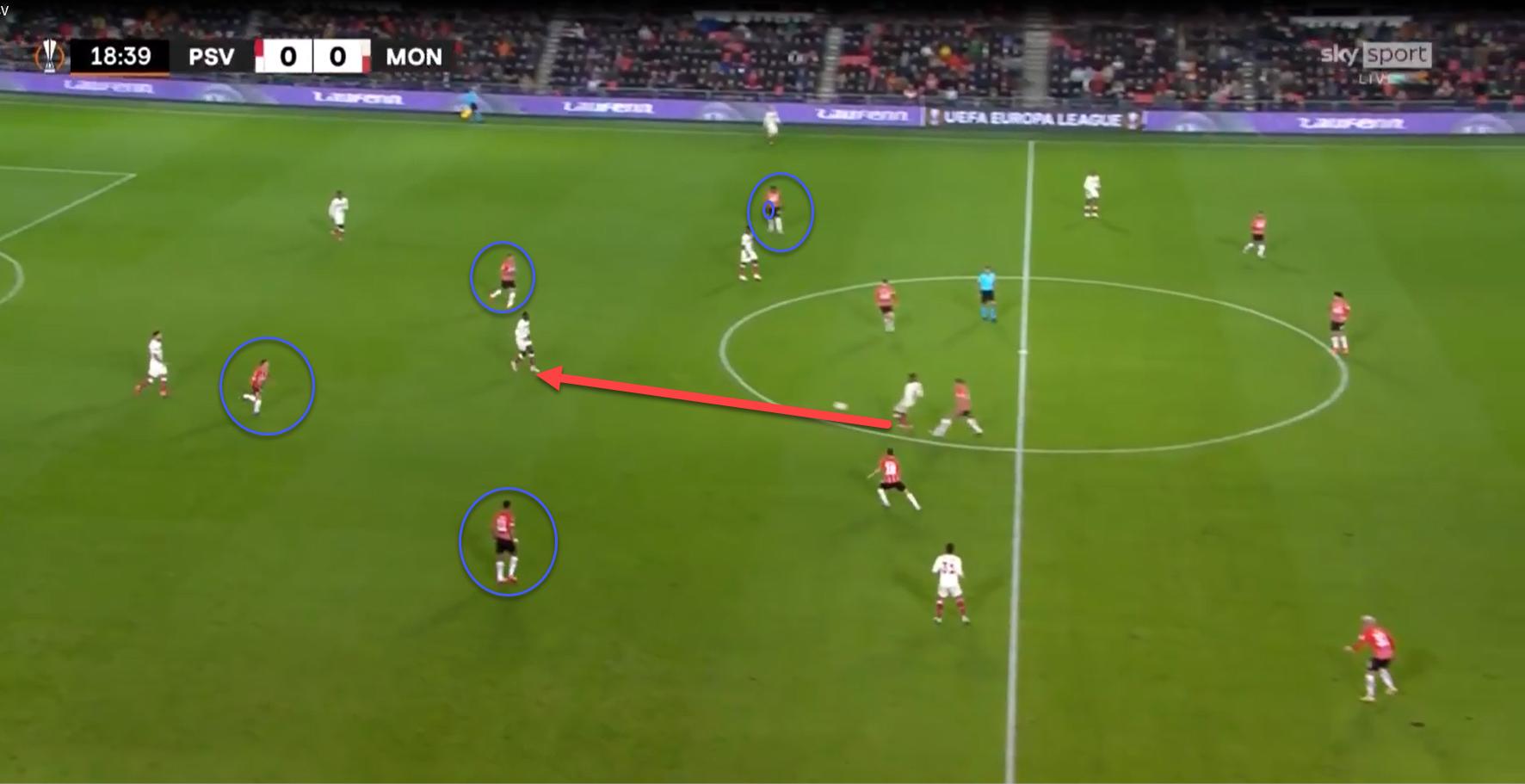 Again as we saw in the earlier example this pass has taken out several PSV players especially the initial press and progressed the ball into the mid-third of the pitch quickly and accurately. Boadu finishes the move off by getting onto a pass from Henrique and putting the ball between Drommel’s legs.

After the first goal, PSV adapted to the pressure caused by Monaco by pressing them higher. By pressing Monaco higher up the pitch it meant they weren’t able to as easily progress the ball up the field. Here we see PSV’s attackers give the Monaco Centre-backs much less time and space, this is most likely a reaction to the effect Maripan was having on the game before the goal. This example shows both Vinicius and Gakpo working hard to close down their men. 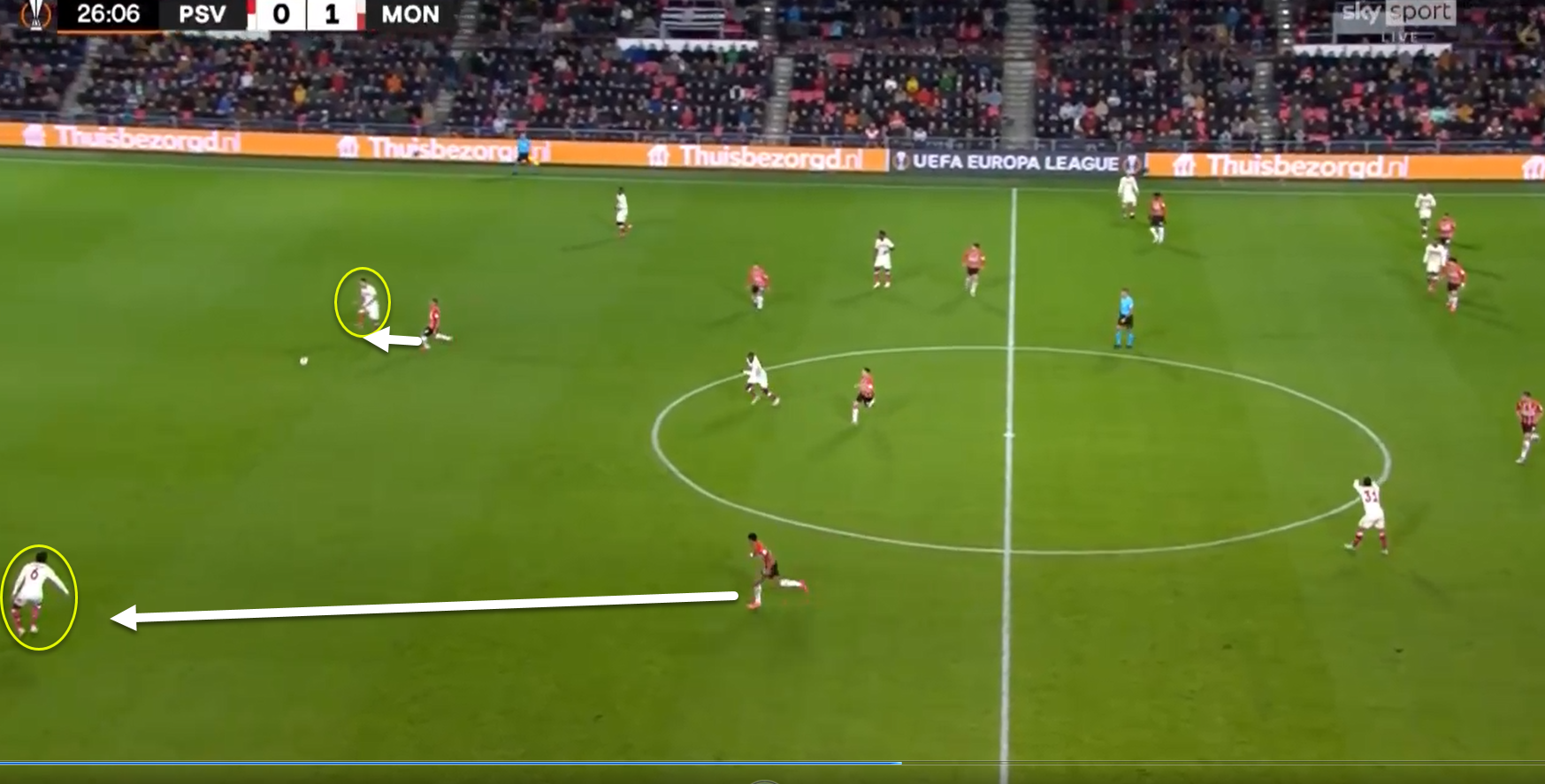 Gakpo presses from the inside, cutting off the obvious pass to Volland. As well as this Götze is pressing the deepest midfielder which then forces Disasi to play the play ball out to Aguilar. 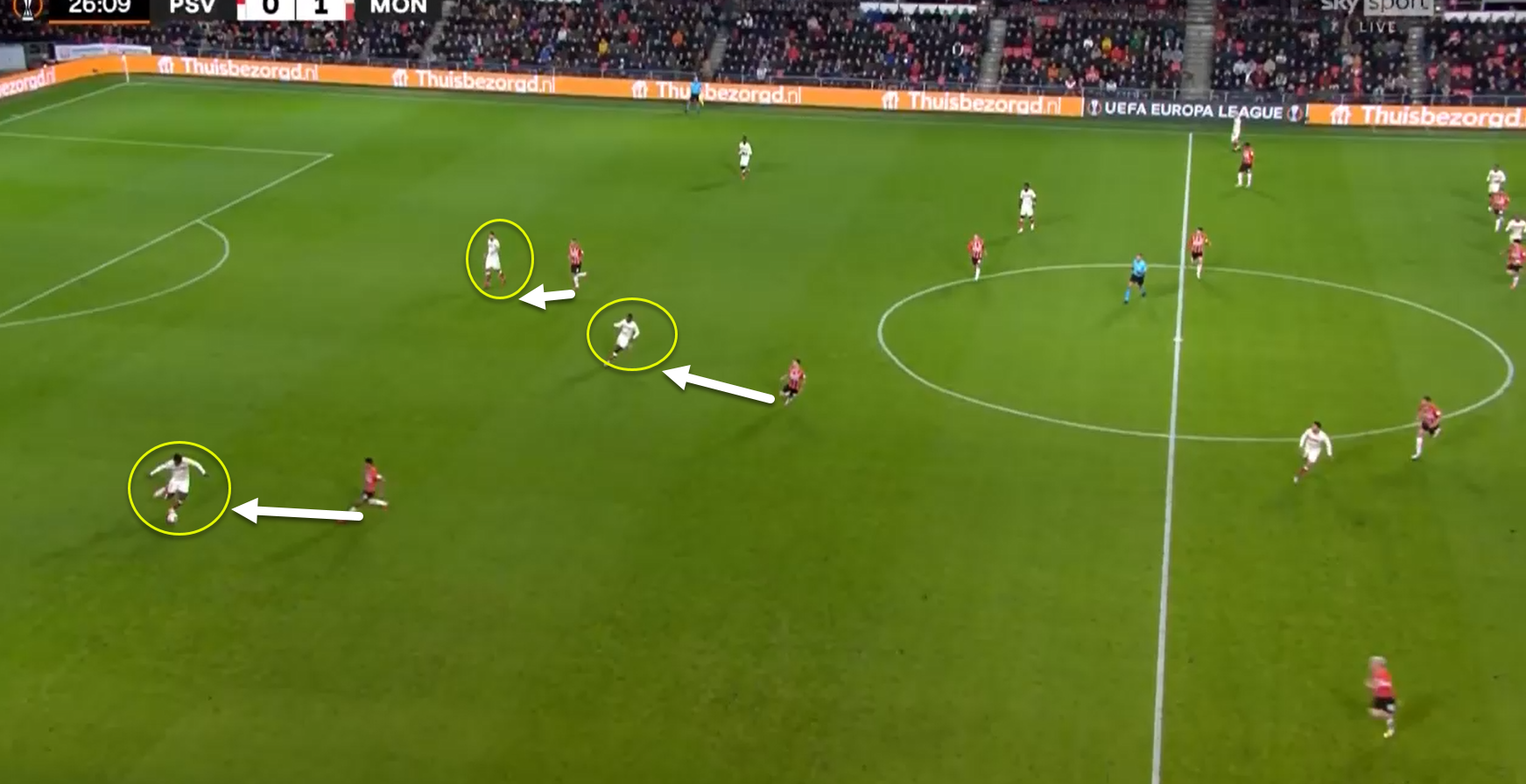 This then allows Max to fly up and press Aguilar and this then leads to a turnover and PSV have the ball in the opposition half. 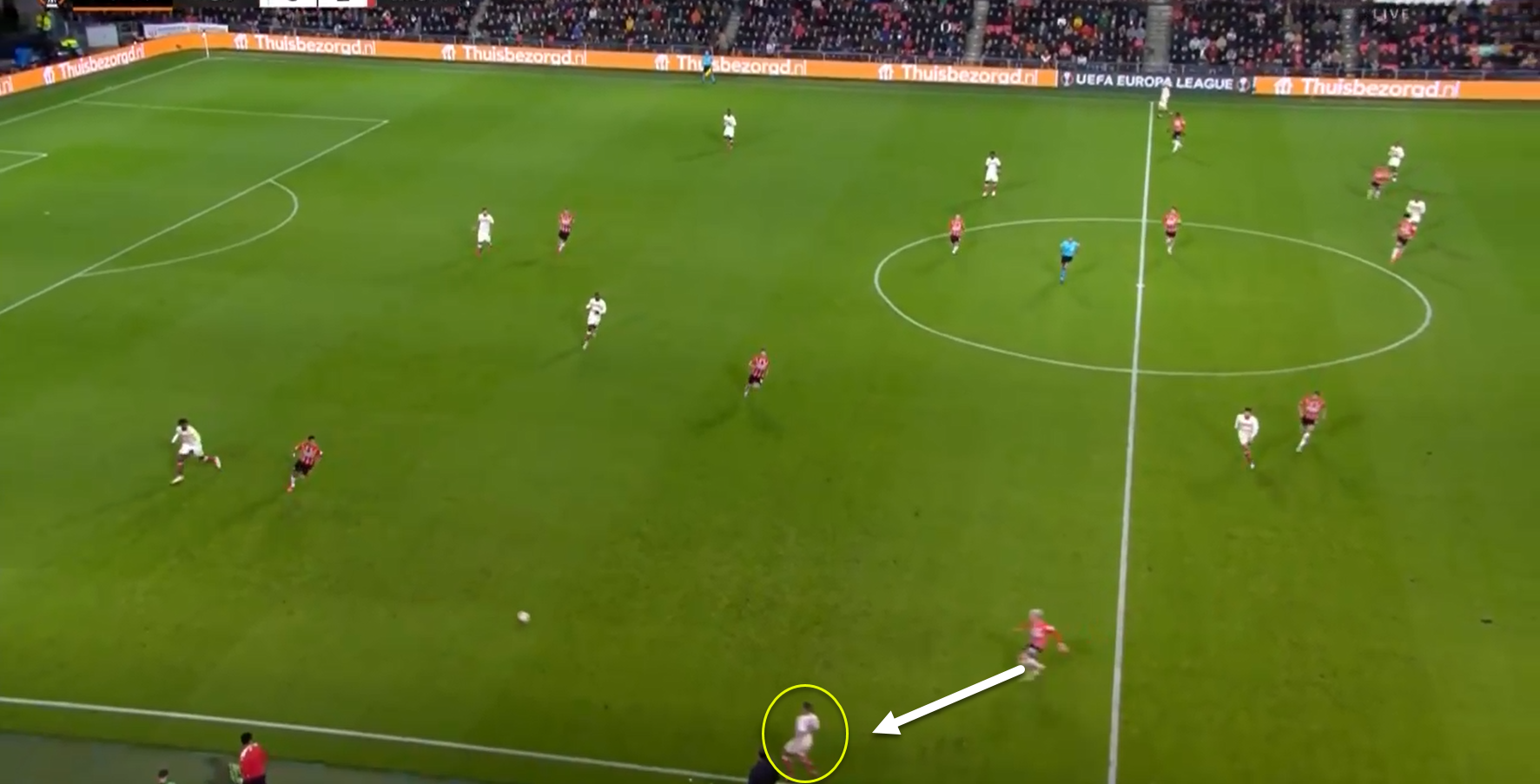 This tactic of pressing Monaco higher by Roger Schmidt’s men led to much more success as the game went on. This was also the cause for their equalising goal in the second half.

On this occasion Badiashile plays the ball back to Nubel who is pressed by Vinicius, PSV does a great job of cutting off his passing options. Gakpo is well-positioned to press Maripan and Götze is cutting off a pass into midfield, this forces Nubel to play a diagonal into Disasi.

Like we saw earlier this just allows Max to fly up and press Disasi, on this occasion he wins the ball after a heavy touch from Disasi. He gives the ball to Gakpo who levels the score with a strike from the edge of the box. Pressing Monaco higher up was a key to PSV getting back in the game as until that moment Monaco was progressing with too much ease.

As the game progressed the importance of Monaco maintaining a good defensive shape was imperative for them to get something from the game. Out of possession, they defended in a low block with a bank of 5 and 4, as shown in the below picture. This allowed them to cut off the space and force PSV into sloppy errors on the ball. Monaco has done a great job of cutting off the space and being compact in the central areas.

On this occasion, Volland shows Bruma inside to the compact area of bodies, as well as this Monaco, do a great job of cutting off his passing options leaving with the only option of passing the ball back to Van Ginkel.

After Bruma passes to Van Ginkel he plays the ball into Vinicius’s feet but Monaco does a brilliant job of surrounding him and leaving very little space. Here you can how Maripan has followed Vinicius tightly, meaning he has no option but to try and lay the ball back of the Van Ginkel who himself has two men on him tightly. Eventually, a heavy from Van Ginkel leads to Monaco clearing the ball. By Monaco remaining tight and compact it forced PSV into errors and them turning the ball over.

In the 74th minute, Monaco replaced Disasi with Martin, this meant they went to a back four for the final 16 minutes of the game. They still managed to keep a good shape but on this occasion with two banks of four rather than the five and four they used earlier in the game. As shown below Monaco has established their two banks of four and have made themselves compact shutting off the space for PSV.

This is the final example where we see again Monaco in their two banks of four being compact and shutting off spaces. They also do a good job of getting two men to the ball which forces PSV to go back, as the player is under pressure. 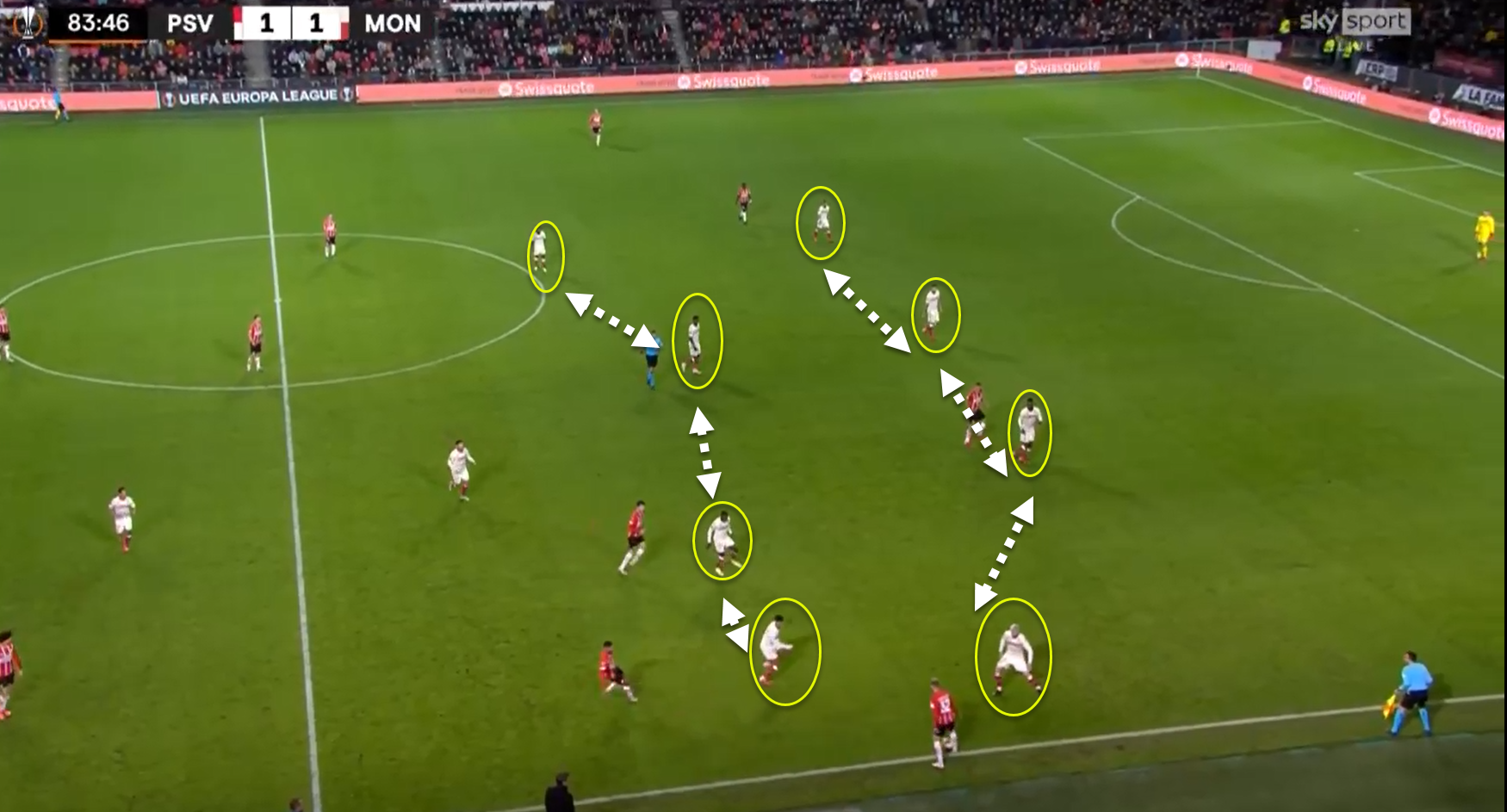 By remaining compact and limiting the space for PSV it left them frustrated and trying more difficult passes and giving the ball back to Monaco.

Thursday’s Europa League clash between PSV and Monaco was a great game from a neutral’s perspective where two teams with differing playing went head to head making for an interesting game. PSV were left ruing their missed and chances and wasteful ball in the final third as Monaco expected their game plan brilliantly coming away with all three points from the Phillips stadium. The reverse fixture in a couple of weeks will make for an interesting game once again.