PSV Eindhoven announced Roger Schmidt as their new head coach and under the reign of Schmidt, Eindhoven might also see a change in their style of play in the near future. After Mark van Bommel had been sacked in the beginning of the season, Ernest Faber took over as the interim trainer. On their search for a long-term solution, Eindhoven found Roger Schmidt, and according to the German manager, Eindhoven’s vision fits him.

In our tactical analysis, we are going to give a brief overview of the tactics that Roger Schmidt deployed at his recent clubs. Moreover, we explain how and why Eindhoven might be improved with Schmidt’s philosophy.

Whereas some managers seem like chameleons and always adapt their playing methodology to the current club they are working for, other managers stick to their philosophy. Roger Schmidt is rather a coach of the latter category. Schmidt follows the approach of high-tempo attacking football and probably no club would ever be able to change that. Therefore, when Eindhoven signed Roger Schmidt, they did sign not only a new manager but also his philosophy. What principles this philosophy includes and what tactical systems Schmidt prefers will be depicted in the following analysis.

During his time at RB Salzburg and Bayer Leverkusen, Roger Schmidt preferably used a 4-4-2 system or a 4-3-1-2 system. Also at his most recent club, Beijing Sinobo Guoan, he often deployed a 4-4-2 system. Below, we can see a passing & positioning network from his Bayer Leverkusen side. It is visible how their attacking play is very much focused on the central areas of the pitch. 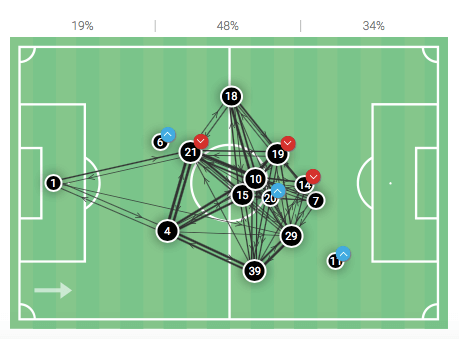 The striking duo would pin back the opposition back line and create space for the wingers or attacking midfielders in between the lines. The latter ones occupy the half-spaces rather than the flanks. The full-backs of his team provide only as much width as needed and push up the pitch to support the attack. This structure can be seen in the image below with only the full-backs in wide areas. 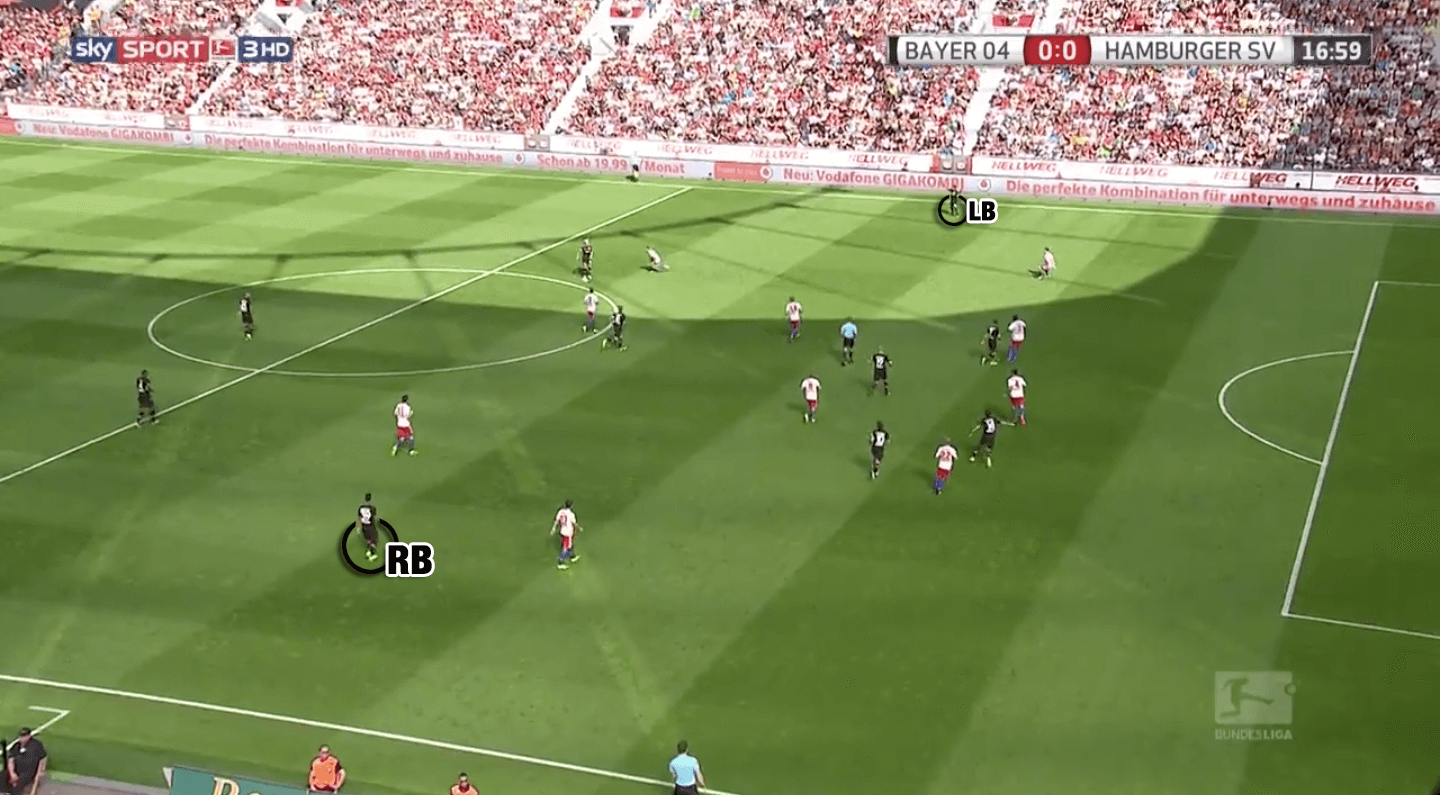 The German manager has been influenced by the playing methodology deployed at the RB clubs, and this impact is still part of his playing style. To begin with, Schmidt is an attacking-minded coach. He wants his sides to always seek for the fastest but still most effective way towards the goal.

His sides usually attempt to keep the passing distances short and create triangular structures near the ball to allow simple progress of the ball. The short passing distances also mean that the ball can be circulated quickly, always changing the angles of attack and in addition to that, open up new passing lanes forward. As a consequence, the opposition can focus on defending a smaller area but need to adjust their positioning to cover all passing lanes continually. Notice the triangular shapes in the scenario displayed below. 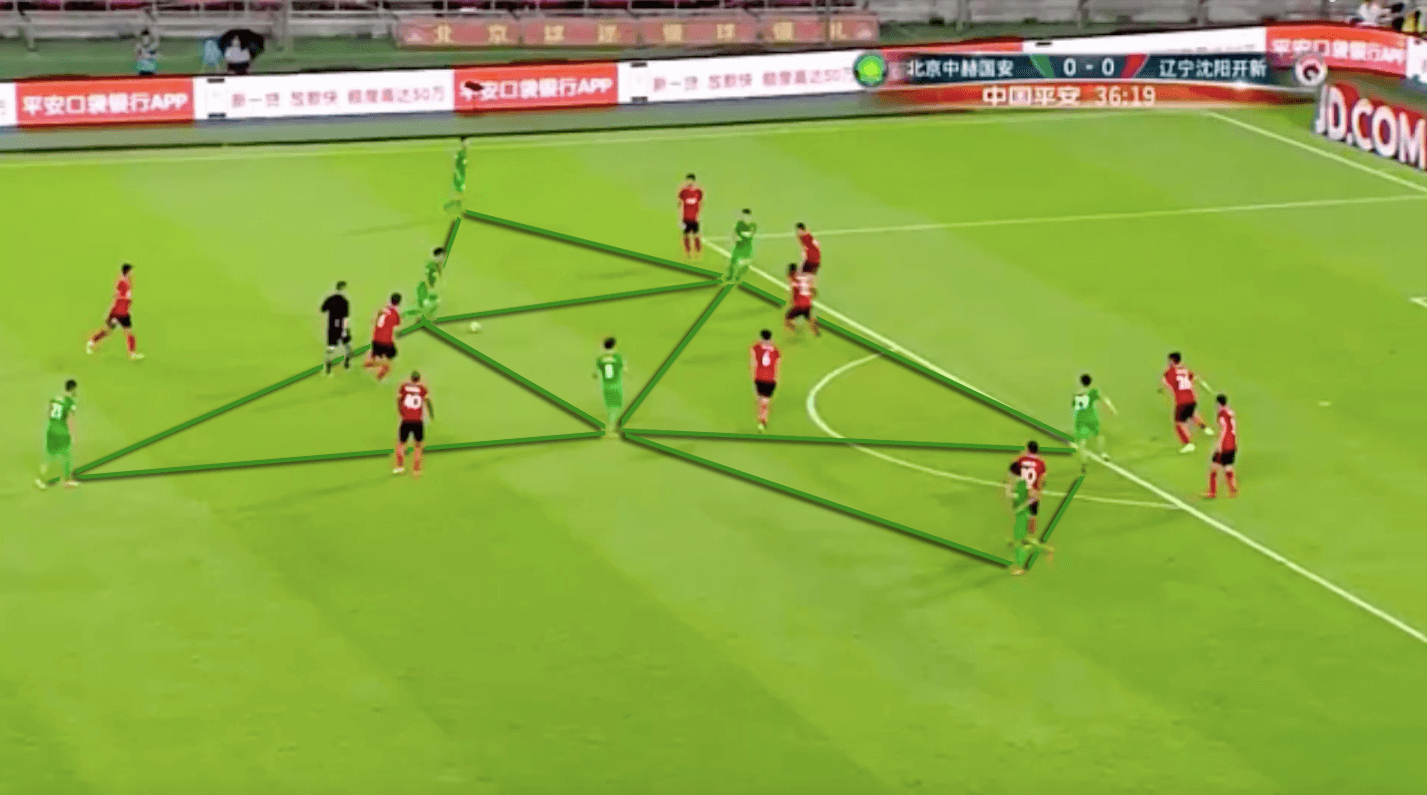 But not only the travelling of the ball makes Schmidt’s attacking play difficult to defend. Overloads and rotations are also concepts that can be depicted when examining games from Schmidt’s recent teams. The players also rotate and use counter-movements. The opposition might then open up space if they follow Schmidt’s players or an attacking player can become unmarked as the opposition fail to take over the opponents. The next image shows a rotation between two of Leverkusen’s attackers. As a consequence, one of their midfielders can receive being unmarked, which creates a good scoring opportunity. 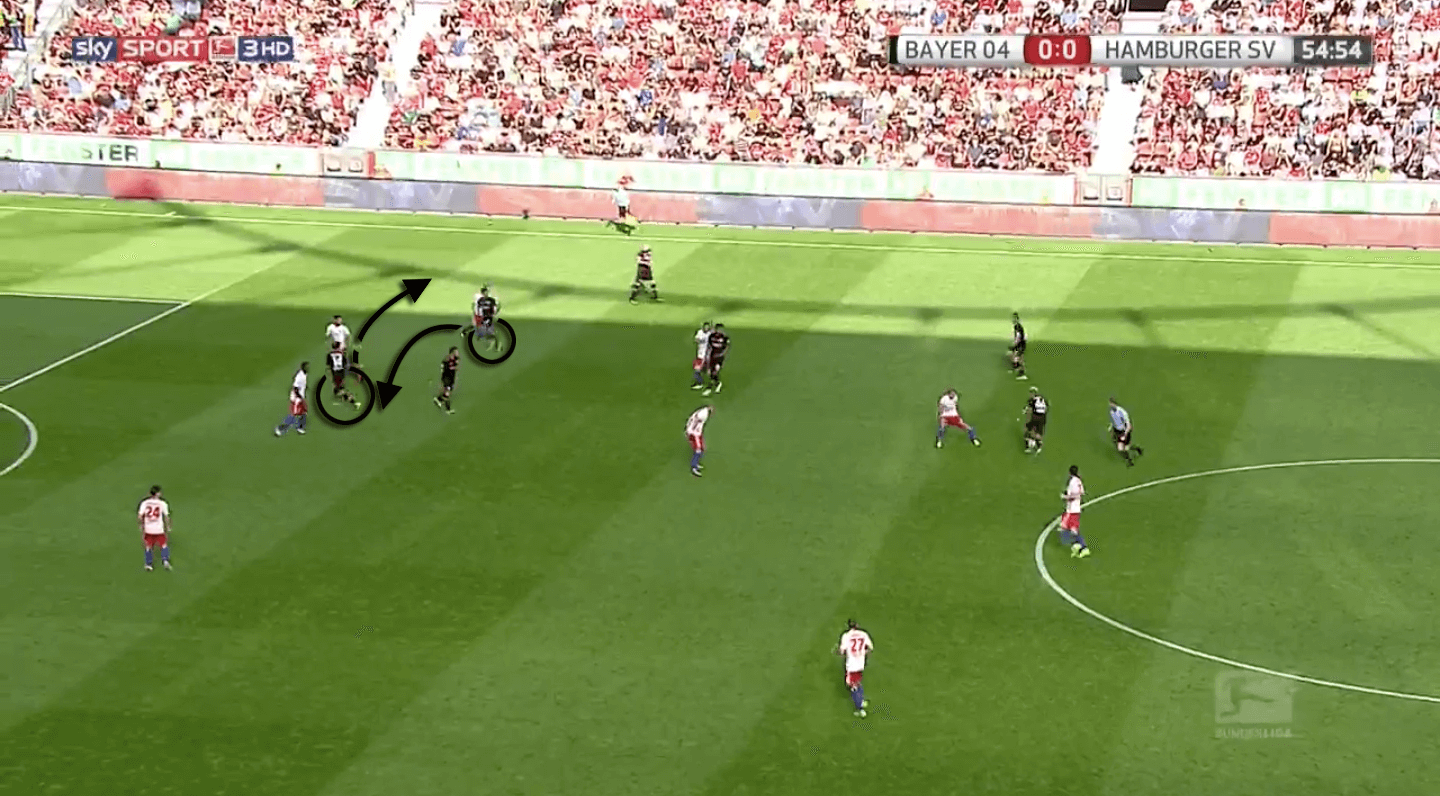 In case the opposition can shift towards the ball with enough players to shut down every single option of Schmidt’s side, they would then look to switch play. Contrary to many teams who look to switch sides towards a high positioned winger on the flank, Schmidt’s teams rather like to switch into the centre or into the far half-space. That way, they remain a relatively short way towards the goal, and it takes less time to switch play due to the shorter passing distance. As another advantage, many defending teams try to nullify overloads with the central players shifting towards the ball while the wide players do not shift with them. As a consequence, a gap can appear which Schmidt’s sides then look to utilise. The following scenario gives evidence. 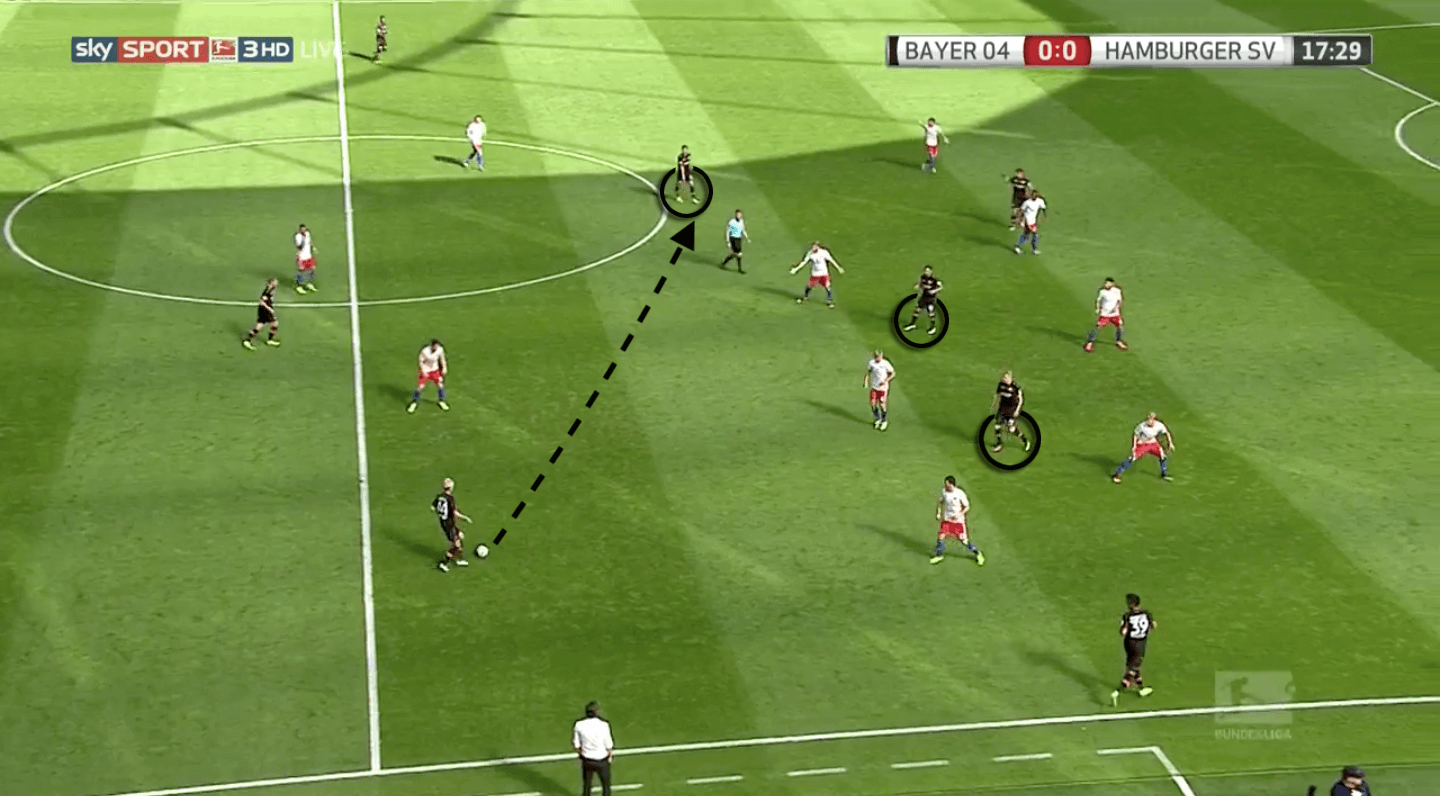 In the image above, Schmidt’s Leverkusen has created an overload on the right. Due to the positioning of their attacking midfielders, they have an ideal structure to switch to the left half-space to progress into the final third.

When defending, Schmidt favours a pressing with high intensity and looks to win the ball high up the pitch. As offensive transitions play an important role within Schmidt’s philosophy, the pressing is vital for his style of play as it ideally prepares for threatening counter-attacks.

The PPDA value of Schmidt’s sides is usually below 10, which indicates a quite intense pressing style. In 2016/17 he averaged a PPDA value of 7.07 with Bayer Leverkusen in the Bundesliga while the average value at Beijing in 2018 was 7.75.

Below, we can see Schmidt’s RB Salzburg team pressing Ajax in a 4-4-2 system. In order to gain enough depth within their shape to press in the opposition half, their structure becomes like a 4-2-2-2. As a pressing trigger, they use a pass to the full-back, for instance. Then they attempt to prevent the opposition from switching play. 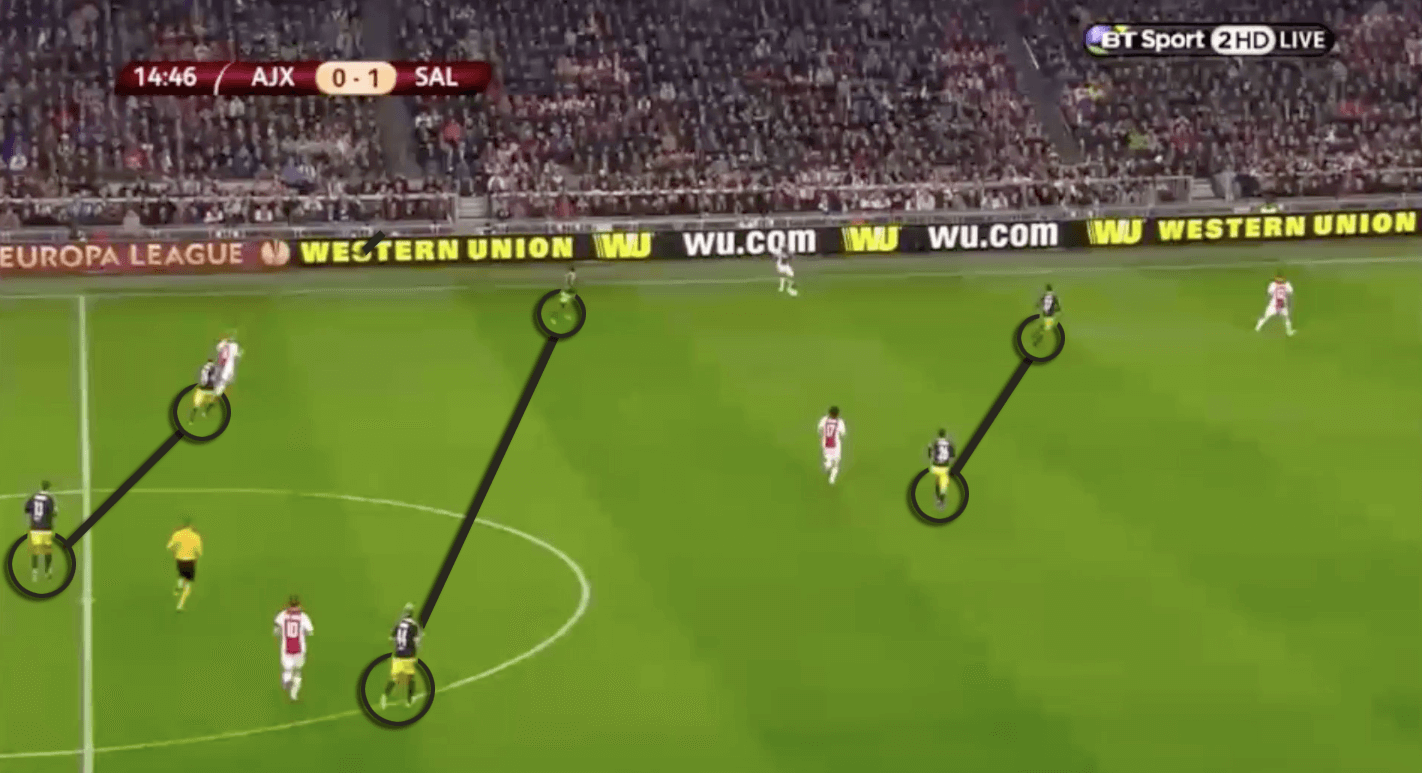 Furthermore, Schmidt also likes to quickly regain possession after losing the ball. With a focus on outnumbering the opposition ball-carrier and a possible next receiver, his sides will quickly shift towards the ball. Through decreasing space for the opposition, they attempt to provoke misplaced passes in order to win the ball. That way, they can often nip the opposition attack in the bud and in addition to that prevent threatening counter-attacks.

In order to predict which Schmidt principles we might see at Eindhoven, we examine the stats from Eindhoven and Schmidt’s recent sides.

Firstly, as one can see below, Eindhoven utilised a 4-2-3-1 system in 75% of their playing time like displayed below. And even if they played with a different formation, they always lined up a back four which fits Schmidt’s preference.

As mentioned before, Schmidt usually deployed a two-striker system in the past. Nevertheless, if Eindhoven’s squad do not possess the required personnel for a two-striker system, Schmidt might continue with a 4-2-3-1 formation that he already used at Beijing at times. Therefore, we will have to wait for the upcoming transfer window to make predictions concerning the exact system.

In order to compare Schmidt’s teams with Eindhoven, we used the data from Eindhoven’s 2019/20 season and compared it with Beijing in 2018 and Leverkusen under Schmidt in the 2016/17 campaign.

The passing stats unveil an area for a possible change in terms of the attacking principles. Whereas Eindhoven looked to dominate the opposition in possession and was keen to keep the ball, Schmidt’s teams play into the final third earlier. Beijing is nearly equal in terms of passes into the final third with an average of 63.68 compared to Eindhoven’s 62.26, but Leverkusen has averaged 74.43 under Schmidt. That Schmidt’s attacking style is more direct can also be proven by other passing stats. Both Beijing and Leverkusen have played fewer back passes with 67 and 68 on average compared to Eindhoven with 77.78. The same can be applied for lateral passes with Beijing’s 157.51, Leverkusen’s 153.24, and Eindhoven with a high value of 186.48. When it comes to long passes, Eindhoven, with an average of 40.28 long passes per game, cannot keep up with Leverkusen’s average of 53.84 and Beijing’s average of 44.44. That underlines Schmidt’s tendency to play forward quickly, and this is something we might see from his Eindhoven side in the upcoming season as well.

And if we examine Eindhoven’s struggles in the 2019/20 season, this might be exactly what they need to gain back their old strengths. Gyula Bartha analysed Eindhoven’s current issues for “FootballBH” and found out that Eindhoven operated with 7.21% less progressive passes and 9.64% less passes into the final third per 90 minutes than last season. This also resulted in a 16.34% decrease in penalty area entries and 15.26% fewer shots on target per 90 minutes.

Under Schmidt, however, these stats might increase again, which could also lead to higher xG-values and more attacking threat.

In addition to that, their PPDA value of 8.17 from the 2018/19 season increased to 12.56. The graphic below shows how Eindhoven’s defensive stats became worse in several metrics.

As pressing intensity is precisely one of Schmidt’s strengths, he might solve this issue though. As mentioned before, his sides provided very low PPDA values with an average value of 7.07 at Bayer Leverkusen in the 2016/17 campaign and 7.75 at Beijing in 2018.

All in all, Roger Schmidt already has got a clear philosophy, and we will probably see not many changes in terms of his style of play at Eindhoven. As shown in our analysis, the German manager might be a good fit at the Eredivisie side because he might be able to lend Eindhoven more attacking threat and pressing intensity again.

Schmidt’s attacking-minded philosophy including overloads and rotations, and Eindhoven as a club in the motherland of “Voetbal totaal “, make a good match. Nevertheless, his task to bring Eindhoven back to their UEFA Champions League times will still be a tough one, and we can look forward to seeing Eindhoven’s interesting project with Roger Schmidt in the next season.