The first match-week of this year’s UEFA Europa League provided some interesting games and among them a great clash between PSV Eindhoven and Sporting Lisbon. In that particular game, the Dutch champions were able to beat the guests from Portugal with a score of 3-2. Both teams are without a doubt the favourites in this group which also contains LASK and Rosenberg. Thus, a positive start into the group stage was the aim of both. In the end, Mark van Bommel’s side claimed all three points and put themselves already on top of the table.

In this tactical analysis, we will examine the tactics of both teams and explain why Eindhoven deserved the win. 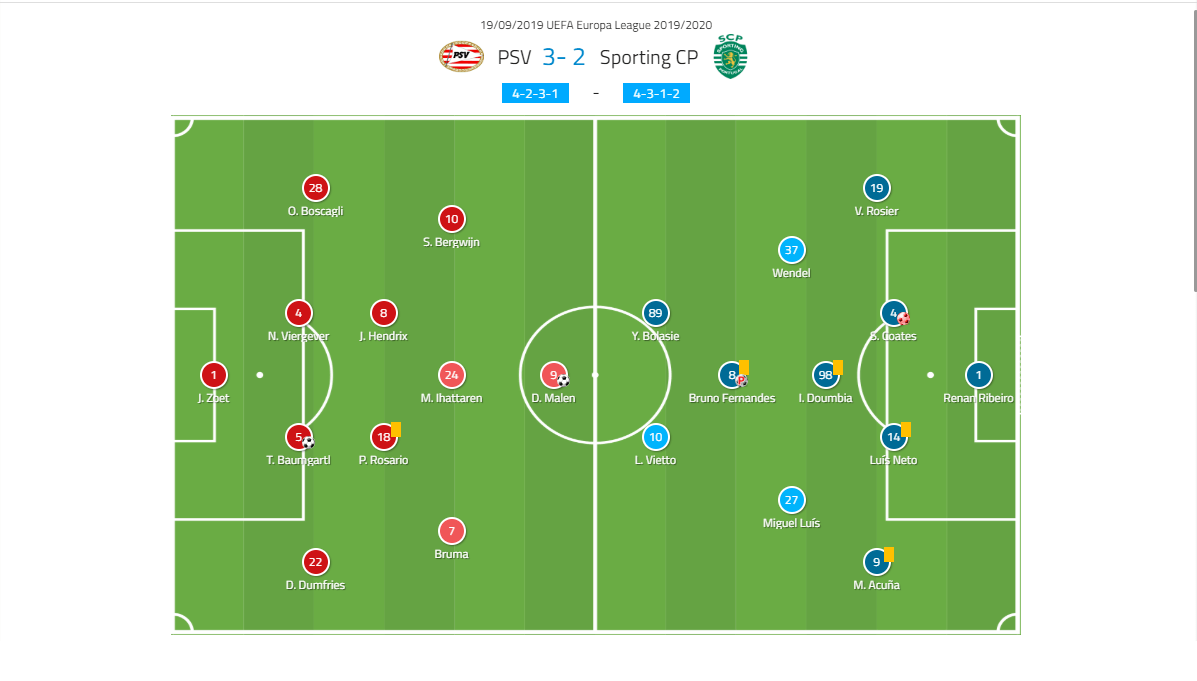 Both line-ups did not provide any major surprises. Mark van Bommel used his preferred 4-2-3-1 system with his two quick wingers – Bruma and Steven Bergwijn. The sole striker Donyell Malen had a flexible role, giving PSV many opportunities to constantly switch positions up-front.

Sporting coach Leonel Pontes, on the other hand, stepped away from the 4-2-3-1 system and decided to play with two strikers in a 4-3-1-2 formation. Here, 25-year-old Bruno Fernandes was the key man behind the strikers Yannick Bolasie and Luciano Vietto. 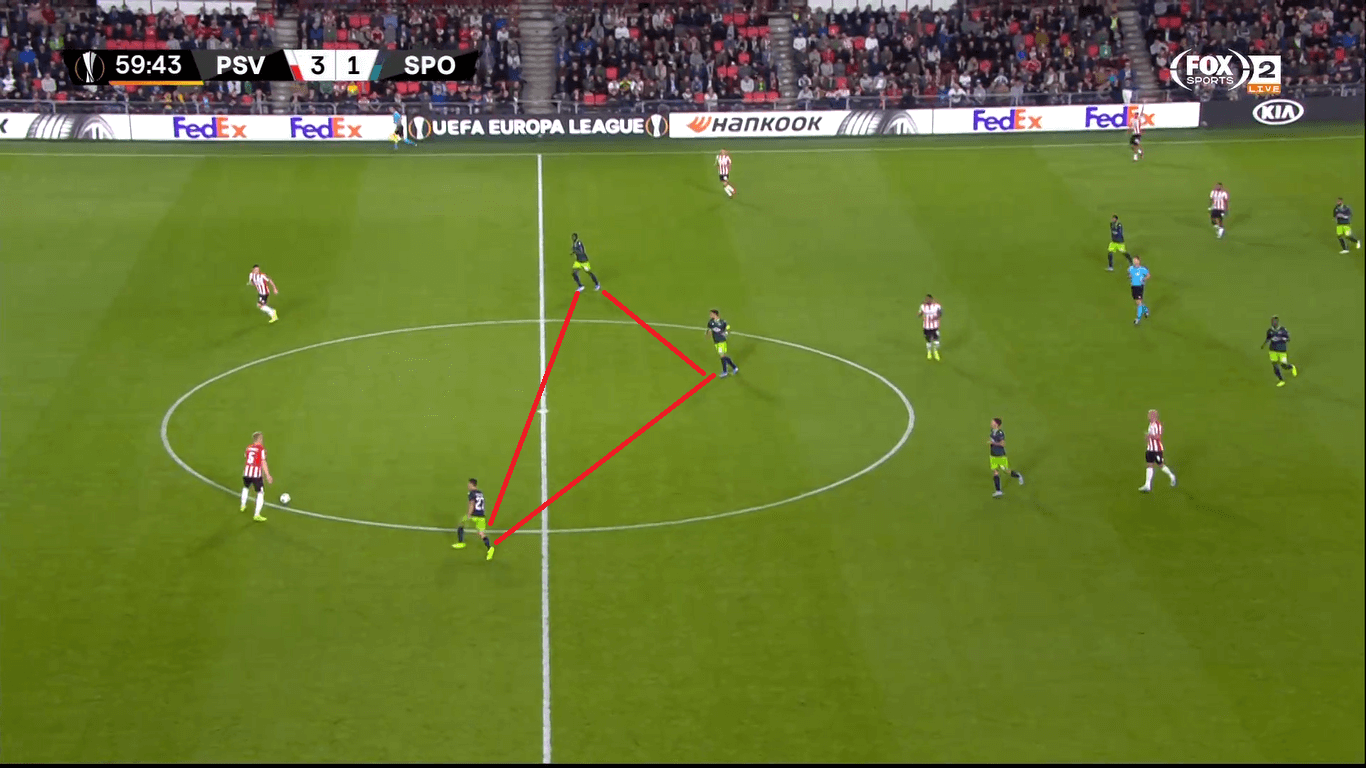 The image above is a brilliant example of this. The two strikers attack the two centre-backs, while Fernandes as hanging forward closes the passing lane into the centre to the opponent’s central midfielders. With Eindhoven not being well positioned in the centre, there is just no passing option into the central area.

The only possibility to stay in possession is to play back to the goalkeeper or somehow get the ball to the full-backs. As a result, Eindhoven mostly had to attack through the wings. The stats suggest that 57% of Eindhoven’s attack came through the left-wing, 26% through the right-wing and just 16% through the centre. 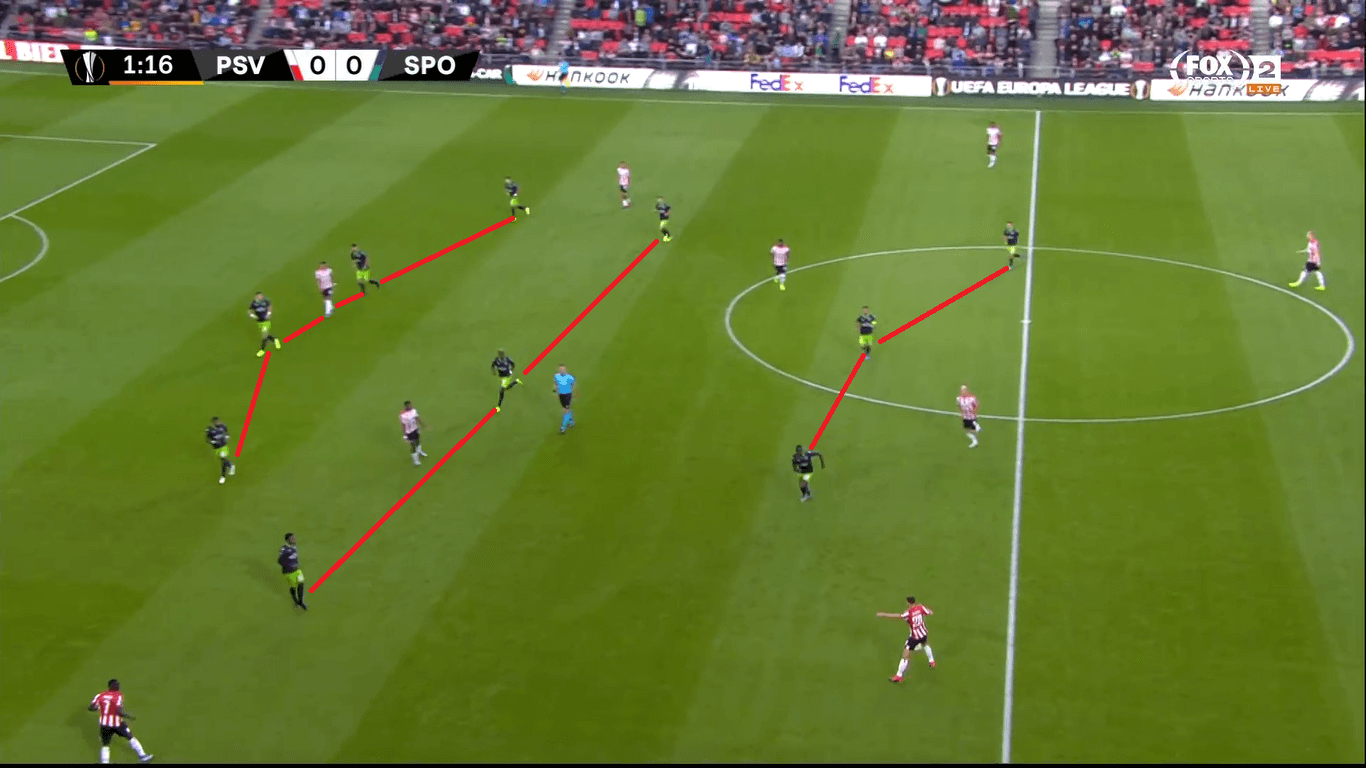 In colour, this looked as above. Eindhoven were forced to the wing, but also failed to provide passing options in the centre. Take Mohamed Ihattaren, the Eindhoven player near the referee, for example. He occupies the gap between two opponents, which is great, but if he received a pass, chances are pretty high he would turn the ball over. There are three or even four opponents who could immediately press him while he is with his back towards the target.

Every other pass forwards is not possible either bar the pass to Steven Bergwijn near the line on the wing. However, even though Sporting defended aggressively and seemingly achieved what they wanted, a great opponent could easily punish their approach in the midfield line, trying to defend the whole width with only three players without even shifting heavily to the wings.

The Dutch team defended much more conservatively. Early on, Eindhoven focussed on staying compact in a 4-4-2, trying to close the centre and not shift too much to the wing. As Sporting only occupied the wings with their full.backs, this was not particularly necessary. 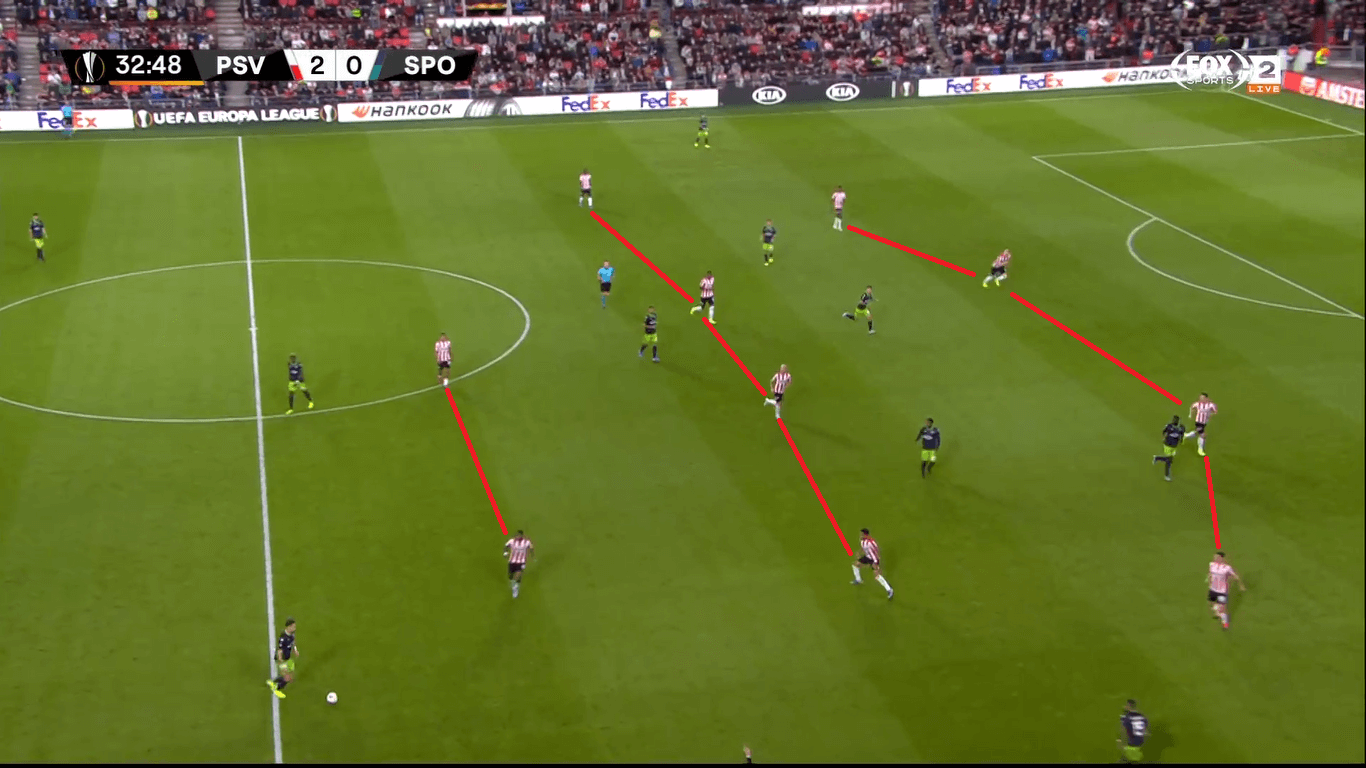 Here, we have an example of this approach. The 4-4-2 structure is pretty obvious and could be observed throughout the whole game. Even though the right-winger could shift a bit more towards the centre, this provided enough stability for Eindhoven. Sporting, on the other hand, positioned three players between the lines but found no way of getting the ball there as well. 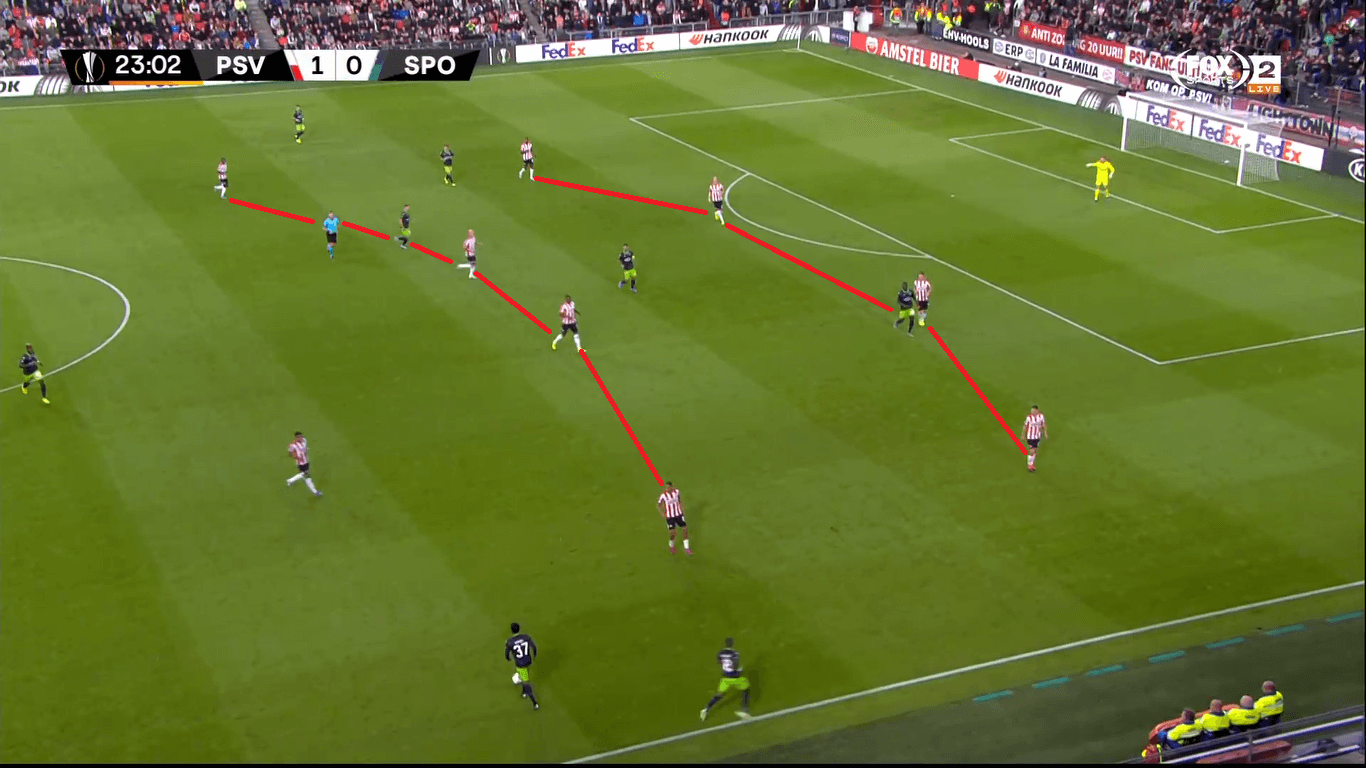 Occasionally, Eindhoven would pull back even more and defend even deeper like in the image above. Mostly, they did not put much pressure on the ball but rather decided to defend calmly.

When they decided to press higher, some problems occurred. Mainly, the vertical compactness could not be maintained, meaning that the gaps between the lines enlarged. The image below provides an example of this. The two forwards attack, while the midfield pushes timidly forward. The backline stays deep. 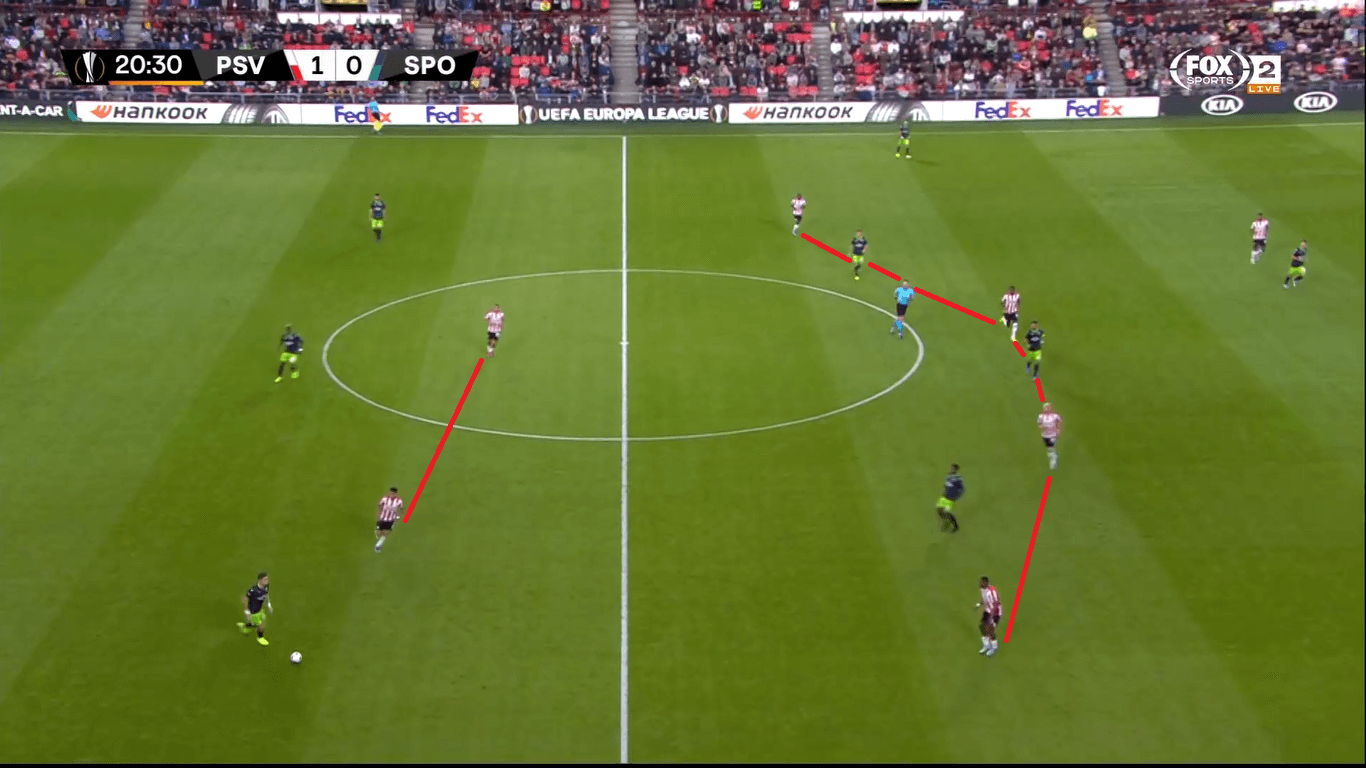 The following image shows this problem even better. 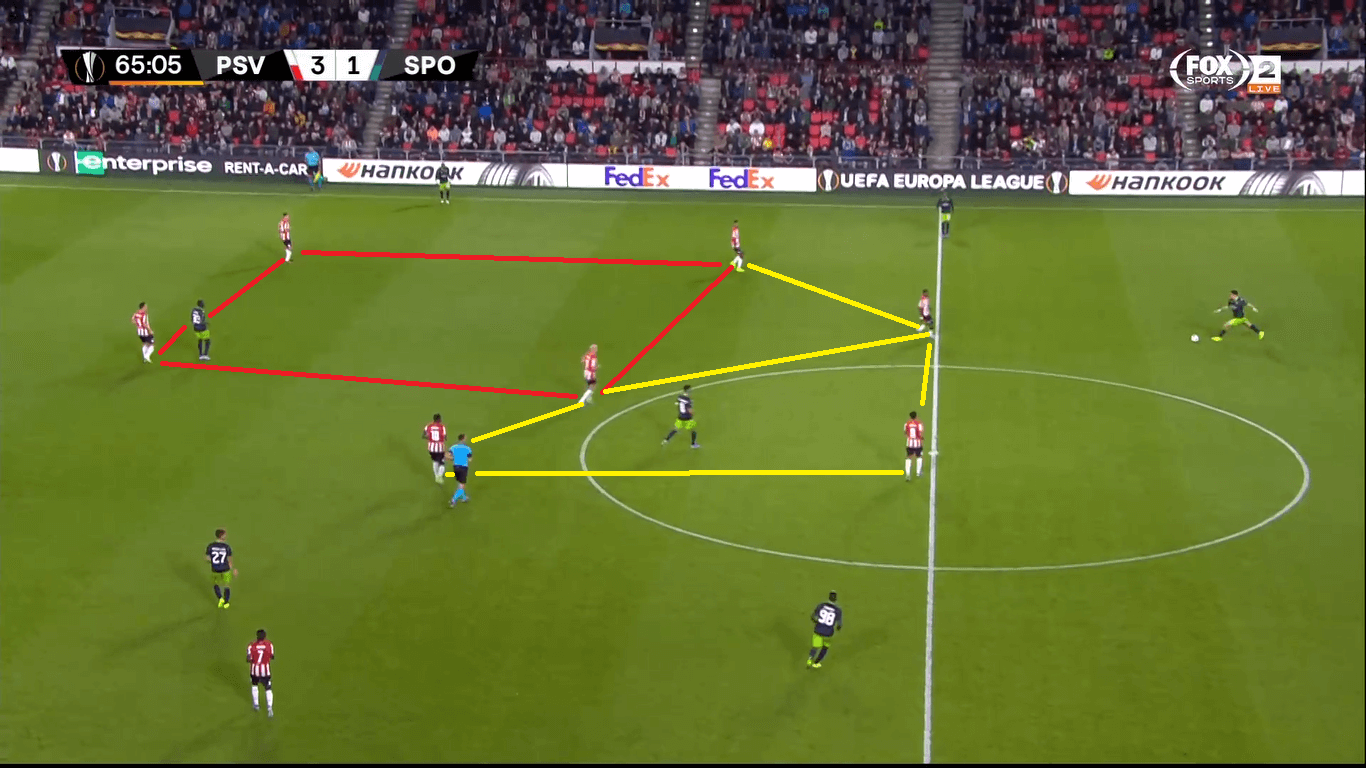 Also, sometimes some strange patterns occurred at Eindhoven. In the image below, we see that Eindhoven all of sudden defend in a 4-3-3, with central forward Donyell Malen being left central midfielder. This might be a reaction to Sporting building up with three players in that situation, but nevertheless it seems odd as no pressure is put on the opponent and therefore the need to switch the structure appears unclear. 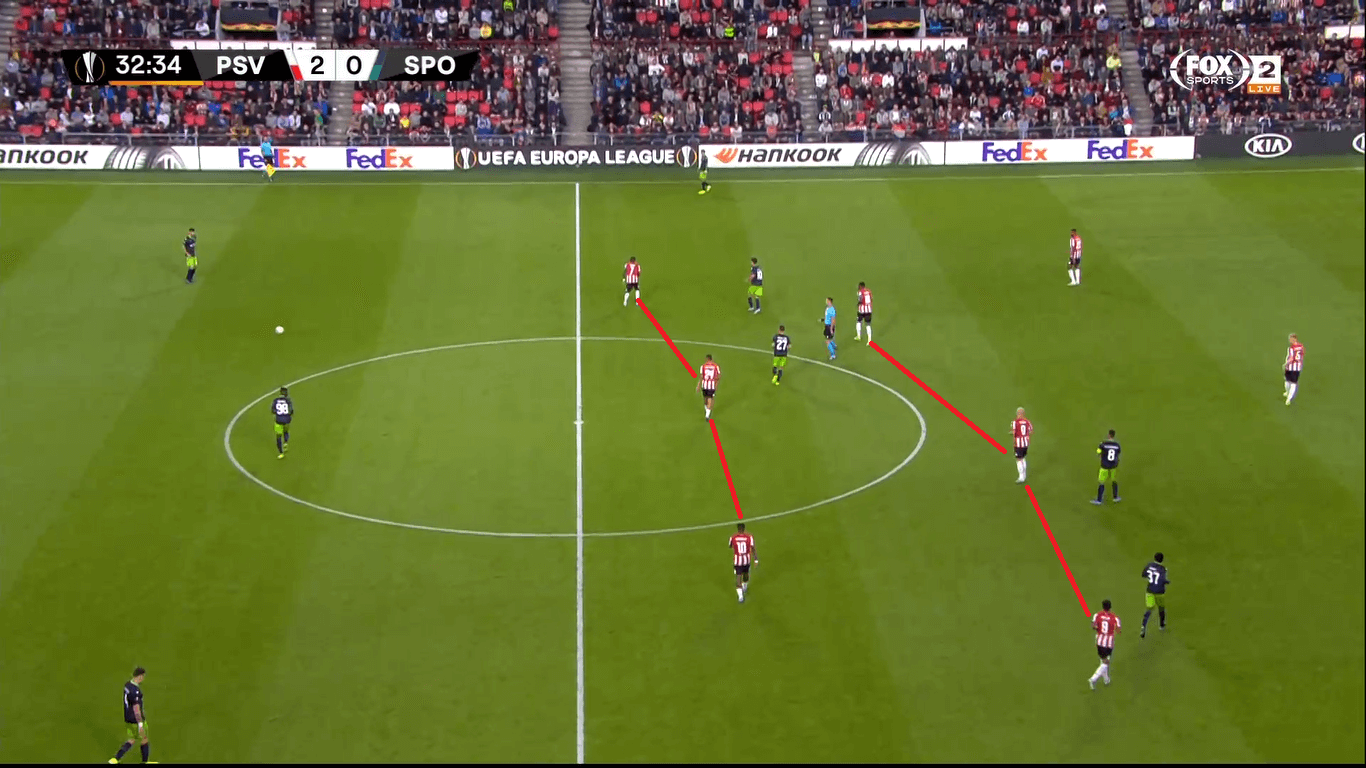 One of the better examples of Eindhoven pressing the opponent can be seen in the image below. At the beginning of the game, when it still was 0-0, Eindhoven occasionally tried to press their opposition. In those particular situations, they did great and were able to force the long ball, as they managed to get numerical superiority near the ball. 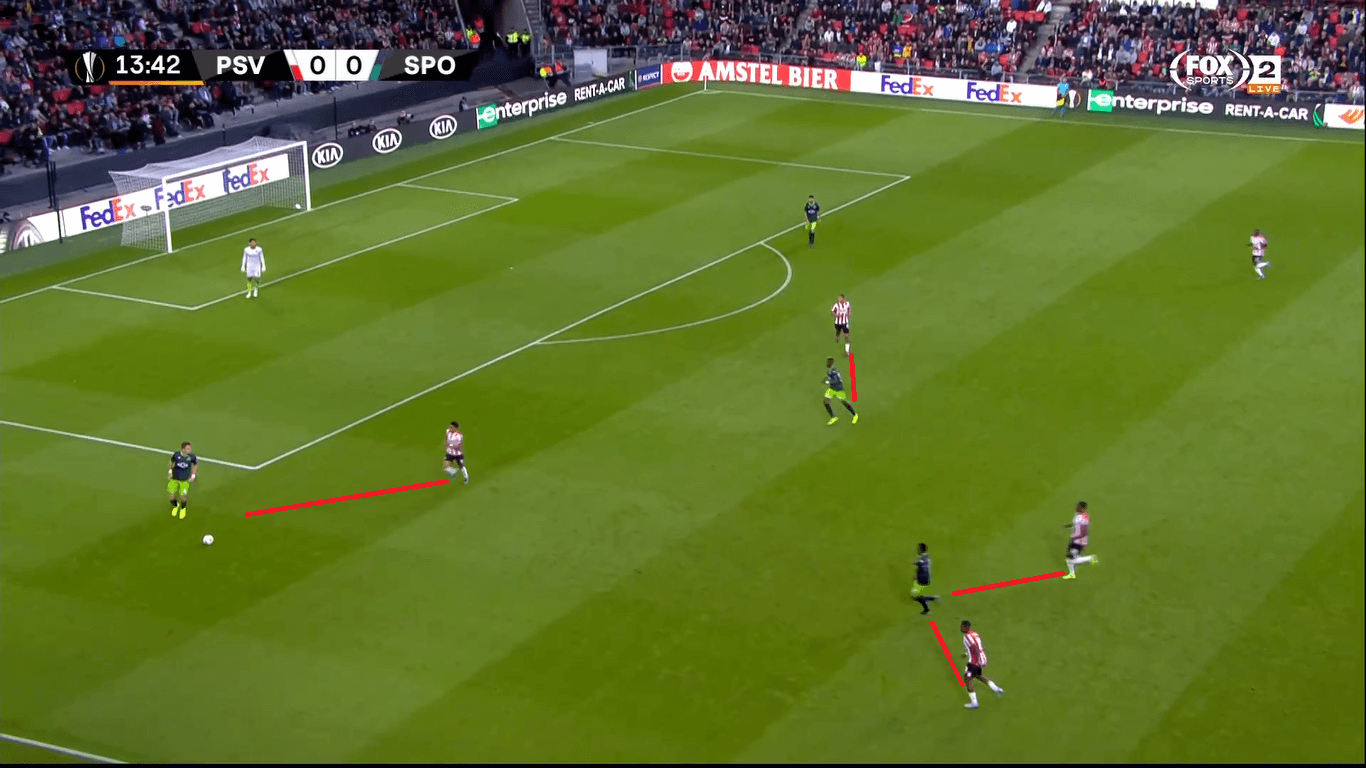 As Eindhoven had to attack so much through the wing, one would expect their wingers to play a big role in the outcome of the game. However, both Bergwijn and Bruma were not really present in that game. Youngster Donyell Malen, on the other hand, was still on fire, being in great shape as he scored five goals in the last league game alone.

Contrary to both wingers, Malen managed to take advantage of the open spaces on both wings. He would constantly move out to the wings, which made it incredibly hard to defend against him. 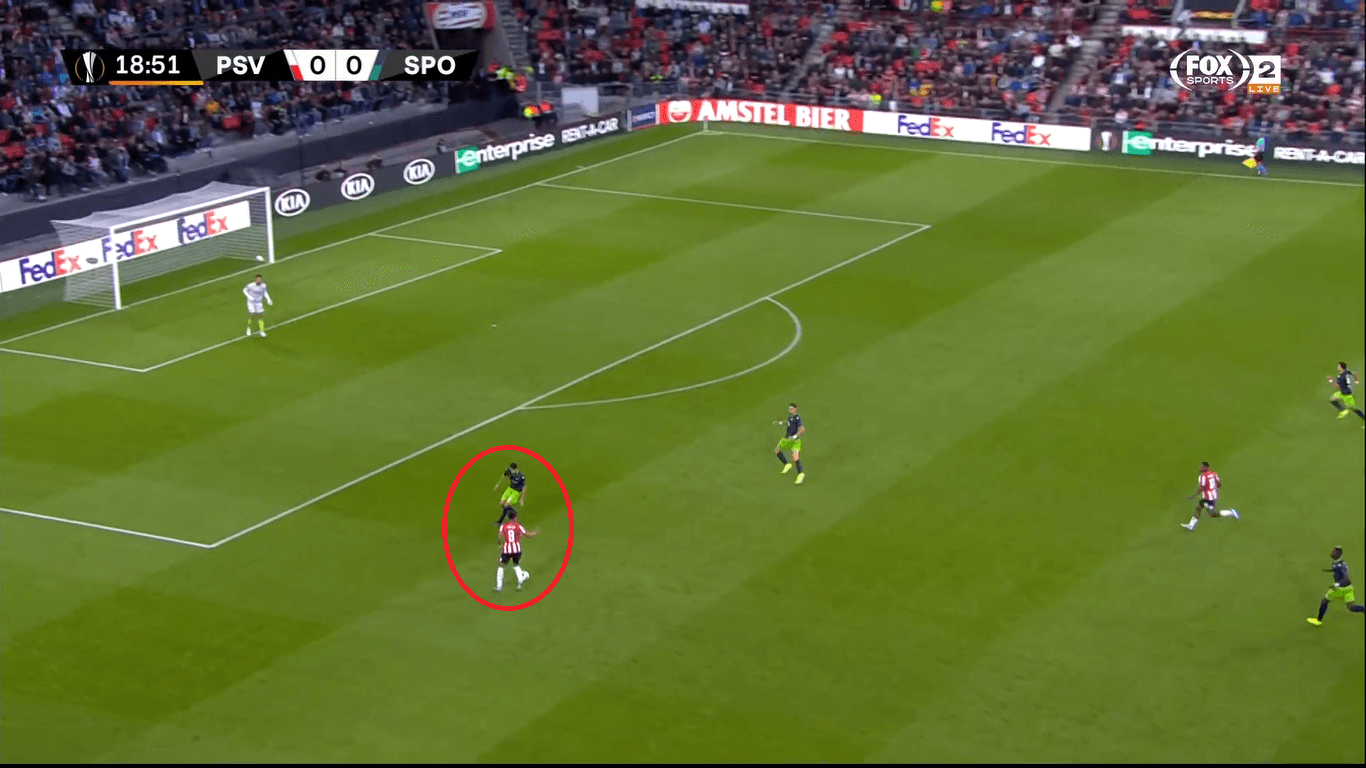 In the 19th minute of the game, Malen received the ball in the left half-space. Thanks to his teammate making the run in the centre, the second defender had to stay in the centre, which practically gave Malen a one-on-one situation. With a great cut inside, he was able to score the opening goal of the evening. This goal was crucial in determining the outcome of the game.

Many times more, his movement provided huge problems for the defence. 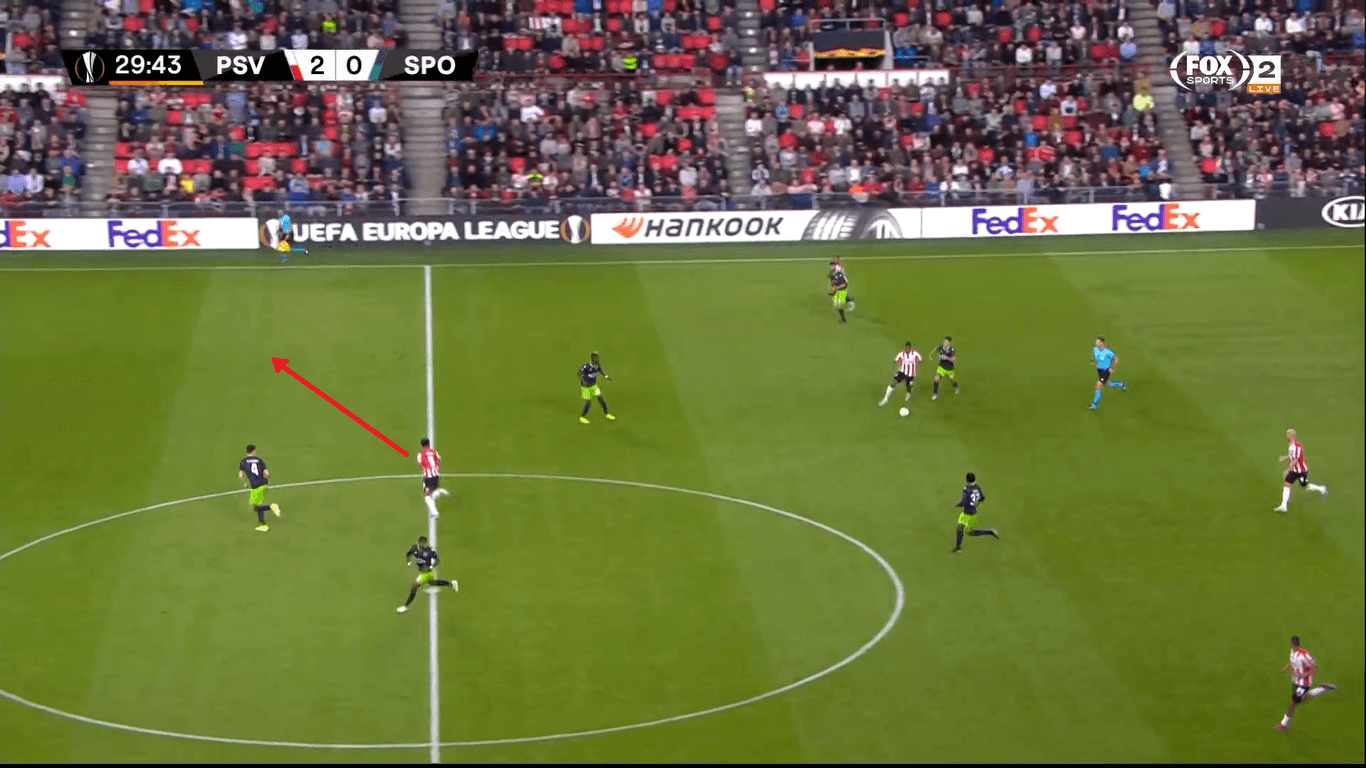 In this situation, he made a move from the centre to the wing, which is typically unusual for a striker. But as this is where the open space was, Malen was quite happy to receive the ball there, as he could then accelerate with the ball at his feet and get his dribbling skills into the game, like in the following image. 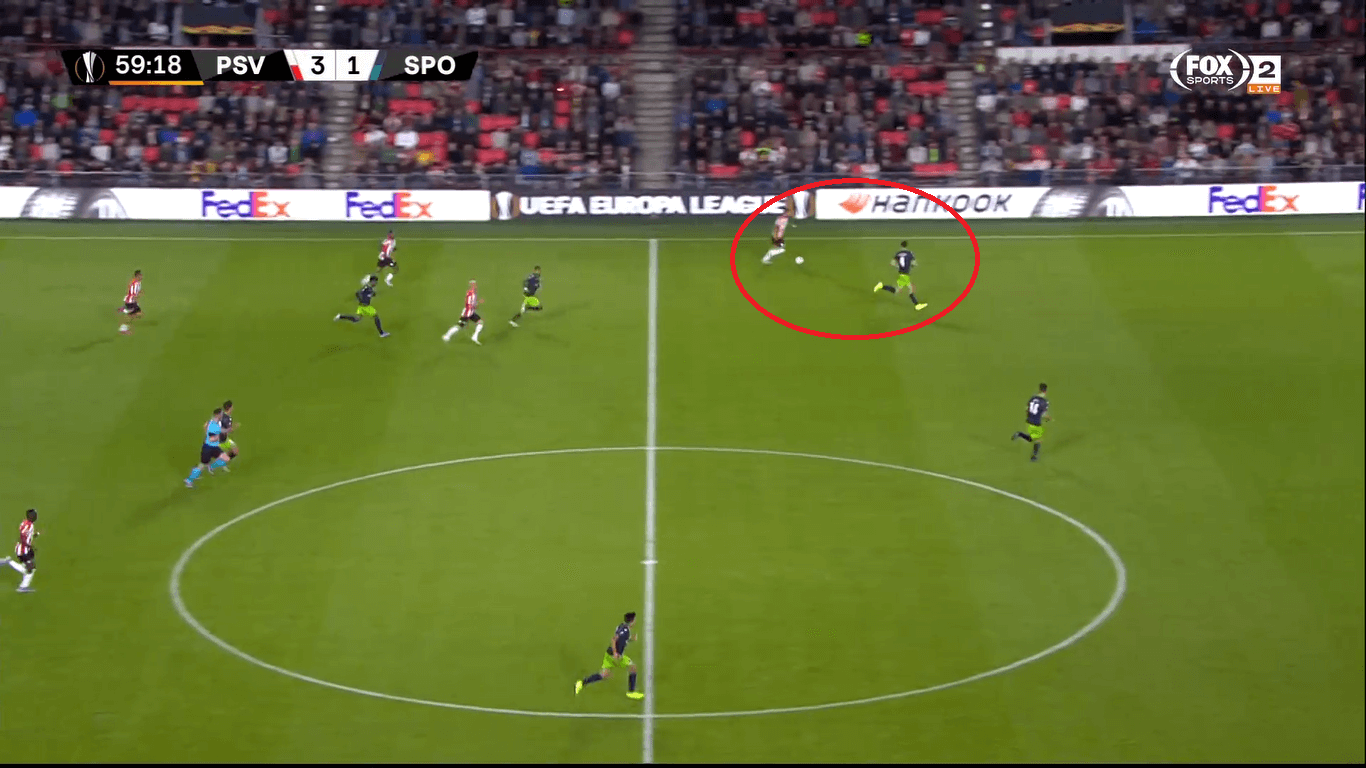 What made it even more difficult for the defenders is that it did not matter to him which wing it was. Malen just looked for the open space and tried to get himself into one-on-one situations.

A great game between two strong sides found a deserving winner, as our analysis showed,  with Eindhoven defending somewhat better. The reader might now ask himself how better defence is the decisive factor in a game where the score was 3-2, but sometimes in football, there are goals that are scored thanks to great individual contribution, without big tactical errors. Malen’s opener and the compact 4-4-2 defence afterwards made it difficult for a team like Sporting to fight back, even though they did great as well.

For sure, there were also tactical weaknesses that better teams could punish, but for a Europa League game, the level was high. Despite the loss, Sporting are still the favourites to take at least second place in their group. Eindhoven, on the other hand, are now eager to finish top of the table.