After long years of absence from the international competitions, both Espanyol and Ferencvaros returned to it with the group stages of UEFA Europa League. The rebound for Espanyol came after 12 years but for the Hungarian side, it was a 15 years period.

Ferencváros started the game pretty well, they were even able to grab the lead in the 10th which put a big challenge ahead of the home side. Espanyol struggled to break down the away team defensive organisation, therefore, the guests preserved the advantage for the second half. The clash ended with a 1-1 draw due to Matías Vargas equaliser.

This tactical analysis will showcase the crucial tactics for both sides. 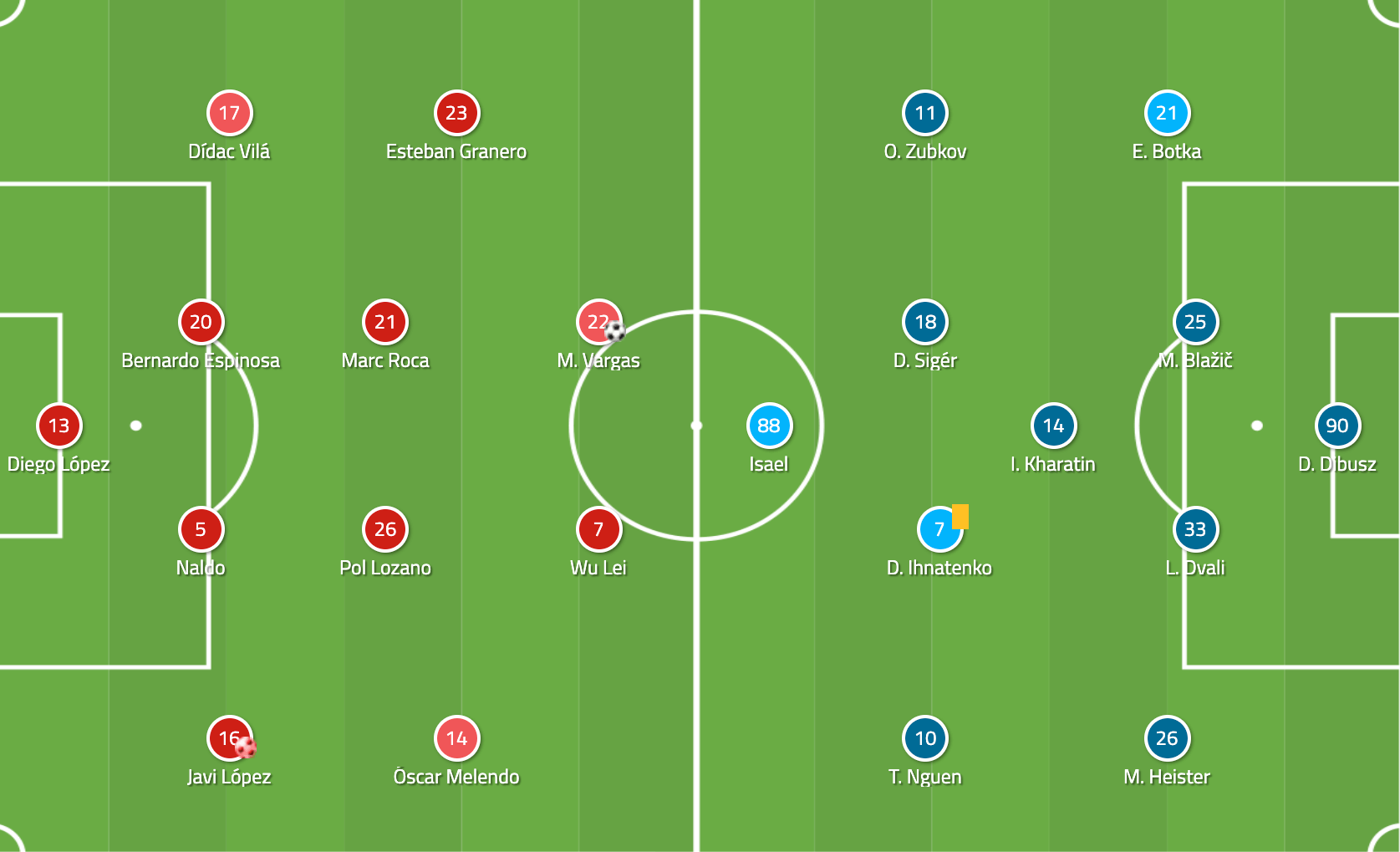 Espanyol were in a fairly bad form due to the fact they collected only four points in four games in La Liga. However, the big difference in the quality of the squad still gave the advantage for the home side. David Gallego lined up his team in a 4-4-2 structure with Matías Vargas and Wu Lei upfront.

Ferencváros had been twice at group stages before, namely the UEFA Champions League in 1995 and then UEFA Cup in 2004. Head coach, Serhiy Rebrov deployed a 4-3-3 formation this time, instead of the usual 4-2-3-1.

Espanyol had interesting dynamics in their build-up play. They formed a diamond to establish a stable possession play against Ferencváros’ pressing, however, the guests did not want to disrupt their first phase of build-up and rarely put pressure on the centre-backs.

Their style of play relied on short passing sequences until they found a way to progress, therefore the diamond was designed to help this. To form it, Marc Roca stayed deep and dropped to the last line next to the centre-backs. With this movement, they formed a three at the back.

Usually, it is common that the deepest midfielder drops between the centre-backs but Espanyol did differently. Roca (21) rather dropped to the left-back position.

The tip of the diamond was Pol Lozano (26) who also stayed deep to offer central pass option. Meanwhile, as the image shows above, the full-backs pushed high up and positioned as wide as possible to make the pitch bigger. This allowed the wingers to came very narrow, they almost occupied in the centre. Although Óscar Melendo (14) and Esteban Granero (23) occupied behind the opposition second line they frequently dropped to offer pass option.

They did that to force the oppositional defensive organisation to constantly adjust their position,  therefore, reveal some space or passing lane that Espanyol could exploit. However, the Ferencváros were able to stay compact and prevent it.

As I mentioned, Ferencváros did not want to disrupt the opponent’s play early on, so they took a bit of a conservative manner to rather focus on the later stages. The away team tried to stop the second phase of Espanyol’s build-up which means they formed a mid-block and as opposed to the high areas, they press fairly intensely in their midfield pressing. This block was very narrow as Rebrov said, he wants to deny the central passes which was evident in Espanyol’s playing style.

The structure was some sort of a 4-5-1 formation as both of Oleksandr Zubkov (11) and Tokmac Nguen (10) dropped to the midfield and only Isael stayed in the first line, but he also dropped deep to help the defence. As the first line of press, he used his cover shadow to block the passing lanes. Whilst Danylo Ihnatenko (7) tasked with presses Melendo when he dropped to the right defensive half-space, and Dávid Sigér (18) was responsible to close down Lozano.

Worth to look at the image above which highlights both sides’ structures. You may see Espanyol’s diamond at the base and the wingers narrow positioning, therefore, only the full-back provided width. Meanwhile, Ferencváros organised into a compact mid-block where the wingers blocked the passing route towards Espanyol’s wingers. The centre-midfielders,  Ihnatenko and Sigér prevented passes towards the opposite strikers upfront, and Ihor Kharatin protected the space in the middle.

When Sigér moved out to press Lozano (26), Zubkov (11) moved a bit narrow to protect the space, this opened up even more space for Espanyol at the wing.

This resulted in Espanyol’s left side was more dangerous.  When they circulated the ball there, they could find more space. For example, at the occasion below, Vargas dropped very deep which created a numerically superior situation for them against Zubkov and Sigér. As you may see below, Zubkov moved out to close down the opposite full-back (Dídac Vilà) while Sigér was in a tough situation to decide which player to follow. He started with tracking Granero but he had to step out to close on Vargas. This decision-making process allowed enough time for Vargas to receive the ball and pass the newly open man (Granero) before Sigér could prevent it.

The away team also tried to build out from the back, although they had little success in it due to Espanyol’s pressing. Before we look into the question why it was a tough job, let’s see how the guests arranged themselves in possession.

Ferencváros’ centre-backs were split relatively wide and Kharatin stayed deep to offer pass option while the full-backs often pushed up by hugging the touchline. The two eights, Sigér and Ihnatenko occupied a bit higher in half-spaces.

Although as the game wore, they seemed to change this structure a little bit. From around the 13th minute onwards, Kharatin started to drop between the centre-backs and two eights formed a double pivot in the middle, which allowed the centre-backs to be more courageous on the ball. Thus Miha Blažič and Lasha Dvali could drive forward with the ball without exposing the back.

When they had the opportunity to play the ball forward, they tried to be direct and quick. In order to do that, Rebrov employed a front three of Zubkov, Isael and Nguen. They tried to play with quick pass combinations and pace. Nguen and Zubkov have the speed to execute it, also the latter one has shooting ability which made his role a bit differ to Nguen. He often shot from the right which created some danger whilst Nguen rather crossed the ball to the box or seeks for passing options. Moreover, Isael has good technical ability to execute the combination even under pressure.

Espanyol started to press relatively high in a 4-4-2 formation. The strikers were passing lanes-oriented, as they always shifted to the ball side to block the passing lane with their cover shadow. Well, only the ball-near one shifted, the far-sided striker became man-oriented and dropped to the centre to mark the deepest midfielder (Kharatin). With this scheme, they could create a hindrance for the opponent which was difficult to overcome. Ferencváros main success was on the right-wing where their goal came from too.

Before the goal, they showed an effective pattern to bypass the opposite press. The key was Zubkov’s dropping movement. In the instance below, Ferencváros circulated to ball from Dvali to the right, for Blažič. Note that the goalkeeper, Dénes Dibusz helped a lot in these situations. Blažič pushed forward after he received a ball.

Meanwhile, Espanyol moved to the ball side to close down the wing. Vargas pressed the ball carrier with a curved run from his narrow starting position. Behind him, the second line shifted to the wing: Granero blocked the pass route to the opposite full-back (green 21); the centre-midfielder, Roca (blue 21) maintained proximity to the central option (Sigér) in order to prevent a pass to him.

However, there was an interesting wing dynamics, as soon as Blažič started to advance with the ball on the right flank, the full-back (Endre Botka, green 21) pushed up next to the touchline and Zubkov (green 11) started to drop too deep to help the progression. This created a decision-making crisis for Roca, which player to mark. He chose to mark Zubkov which freed up Sigér and allowed him to receive the ball from Blažič. Then the ball progressed to the left-wing where Marcel Heister (left-back) received it.

This same pattern occurred before Ferencváros’ goal but a bit higher up the pitch and they could break down Espanyol’s defence which allowed them to create a highly dangerous situation that ended with an own goal. Blažič drives forward on the ball while Zubkov dropped deep again, due to Espanyol’s high last line, it could pull the opposite full-back (Vilà) out of position. This created space behind him that Ferencváros targeted with a long air ball. Isael runs towards the vacated space to collect the ball progress to the final third.

As this analysis has shown, Espanyol and Ferencváros delivered an intriguing tactical battle. Over the course of 90 minutes, Ferencváros displayed a good and mature performance which could collect the three points but the home side was able to come back with a fairly lucky goal.