The first matchday of the UEFA Champions League saw Atletico Madrid host Juventus, in a rematch of last seasons Champions League Round of 16. The first leg of that meeting saw Atlético Madrid secure an easy 2-0 victory at the new Estadio Wanda Metropolitano and look likely of advancing to the Quarterfinals. The return leg proved to be a complete reversal, as a Cristiano Ronaldo hat-trick saw Juventus recover to knock-out Atleti and advance to the quarterfinals.

This match was one of the highlights of matchday one, as it saw a meeting between two sides that can expect deep runs in the knock-out stage of this competition. Atlético Madrid has a new look this season, as they upgraded their ageing fullbacks and replaced their side’s most lethal attacker, Antoine Griezmann, with the third most expensive player in history, João Félix.

Juventus have had some problems as they adjust to their new manager, Maurizio Sarri, who arrived over the summer after a mixed campaign at Chelsea. The new manager missed the first couple of Serie A matches this season after suffering from pneumonia. With these problems, his side has been slow to adapt to Sarri’s system.

This tactical analysis will look at how both sides were able to maintain compactness in the first half. We’ll look at the tactics of both sides as the match opened in the second half. Finally, this analysis will examine the role of Atlético Madrid’s switching play in the attack.

Diego Simeone made only one change to the side that lost 2-0 away to Real Sociedad at the weekend. Vitolo was dropped to the bench and replaced on the right-wing with Thomas Lemar. After replacing Juanfran and Filipe Luís with Renan Lodi and Kiernan Trippier, Atleti has a pair of more dangerous attacking fullbacks, and they’d be very important in this match.

Maurizio Sarri also made only one change to his side from the weekend. After a disappointing 0-0 draw away to Fiorentina on Saturday, Juan Cuadrado came into the starting line-up on the right side in place of an injured Douglas Costa.

Both sides show a stout and organised defence in the first half.

Atlético Madrid lined up in the 4-4-2 that has become Diego Simeone’s calling card in Spain. This allows his side to defend compactly and limit the space in the middle of the pitch for Juventus to attack through. While Simeone had experimented with different formations in La Liga, as he’s attempting to utilise the more attacking assets he has this season, when it came to the first European fixture of the season, he went back to the 4-4-2.

In the opening moments of the match, his side sat back and defended in a low block as Juventus were allowed possession. It didn’t take long for Atlético Madrid’s manager to urge his men higher up the pitch and instructed his front line to press the Italians. However, his midfielders were slower to advance up the pitch. This resulted in a gap between the attackers and the midfielders for Miralem Pjanić to operate.

An excellent example of Pjanić finding space came in the 13th minute. These images show how Simeone’s defence work, as well as how Juventus went about finding space. The ball side wide midfielder moves up the pitch to close down the ball when it’s along the touchline. As the ball moves across the backline, that wide midfielder steps back into the midfield line and the wide midfielder on the other side steps forward to challenge the full-back. The attackers stay high up the pitch to pressure the Juventus’ centre-backs, but the central midfielders stay back. This opens up space for Pjanić to receive the ball.

A good example of this came in the eighth minute, with the ball out wide on the right side with Juan Cuadrado.  Atlético Madrid have Gonzalo Higuain and Cristiano Ronaldo well marked. In the area between the lines, there are limited options for Juventus. Only Sami Khedira is in area, but he’s covered, and Thomas Partey is controlling the space.

Juventus get the lead

With the problems Juventus had in the final third, Ronaldo started moving more centrally and playing alongside Higuain. This left it to Blaise Matuidi to provide the width to Juventus’ attack. In the image below, we can see that Ronaldo has moved inside and Matuidi has moved wide to cover his movement. Both of Sarri’s fullbacks stayed deep, to prevent Atlético Madrid from breaking forward on the counterattack.

With their struggles in possession, Juventus had success in the second half in transition. Instead of a patient build-up, Leonardo Bonucci played a long ball forward. Higuain was able to get behind the Atleti centre-backs. He was able to gather the ball in a wide area and moved to the top of the penalty area. With Atlético Madrid rushing back to defend, Higuain played the ball across the top of the penalty area to Cuadrado, who was able to scuff a shot into the goal.

Juventus’ second goal also came through a quick transition. Ronaldo brought the ball forward before playing it out wide to Lodi. Lodi was able to cross the ball for an on-rushing Matuidi, who was filling in for Ronaldo who was left behind the play.

Atlético Madrid’s build-up in attack typically consisted of the wide midfielders moving into the half-space, looking to link up the midfield with the attackers. This opened up space in the wide areas for the fullbacks to get forward. It was obvious that Simeone had instructed his fullbacks to stay high and wide, as his side was constantly looking to switch play. As we can see from the graphic below, both Lodi and Trippier are staying wide and are some of Atlético Madrid’s most advanced players.

In the 16th minute, we can see Thomas Lemar has moved centrally with the ball on the opposite side of the pitch. Trippier is the most advanced on the right side, looking to provide width to the Spanish attack. 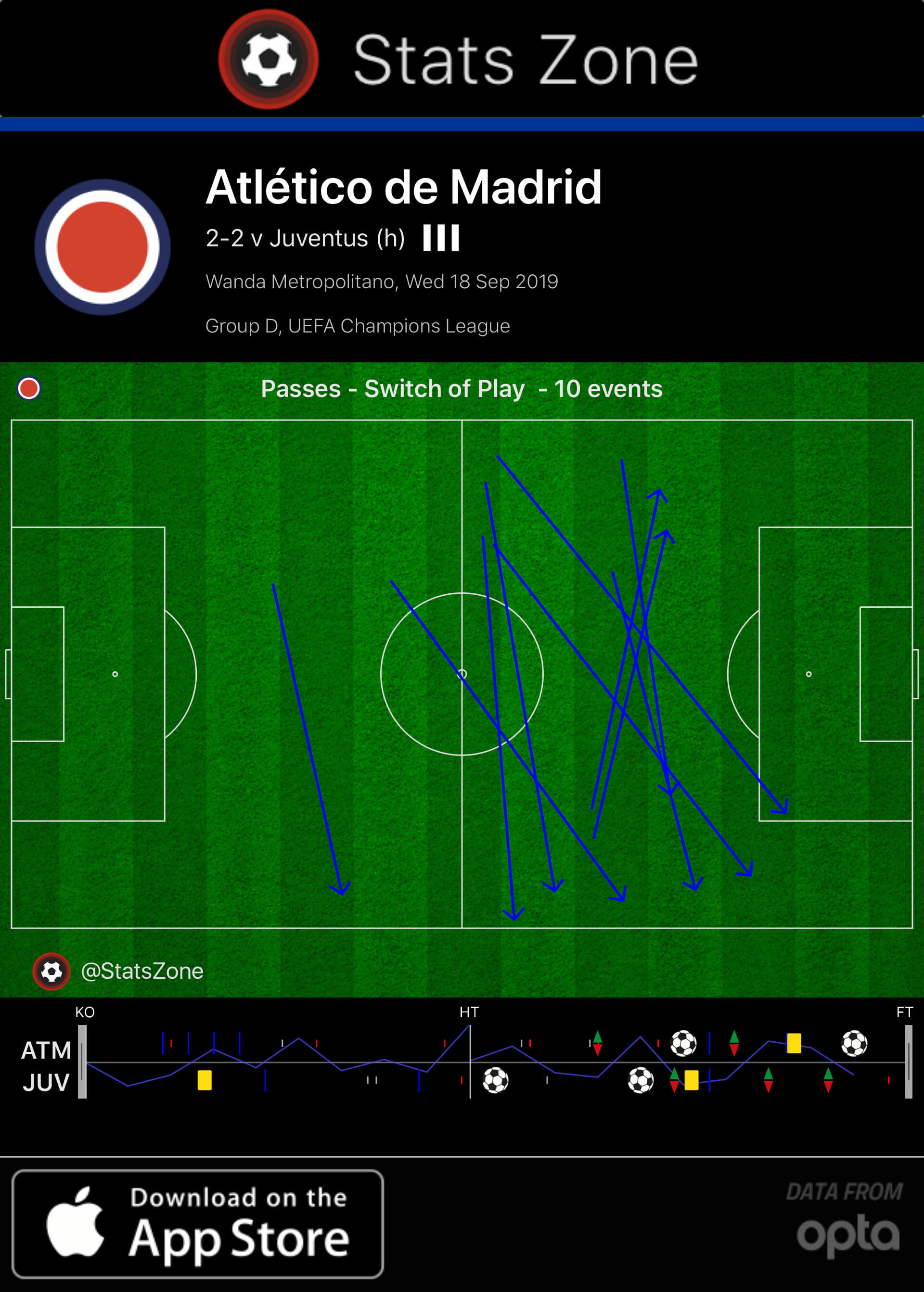 A key component to Atletico’s attack was switching play to Trippier. Another example of this came in the 23rd minute when Diego Costa switched play to Trippier on the right side of the pitch. Trippier repeatedly had open space to move into and was able to deliver crosses into the box. Bonucci, in the Juventus defence, was increasingly irritated as his side was unable to prevent the crosses coming into the box. Trippier had several targets in the box, but he struggled throughout the match to hit his targets in the penalty area.

After Juventus went up 2-0, both sides started to lose the defensive structure that served them so well in the first half. Juventus’ pass accuracy got worse, and they started gifting possession to Atlético Madrid. While Atleti struggled to create clear chances, it did give them more set pieces. This usually presents a dangerous opportunity to a Diego Simeone side. 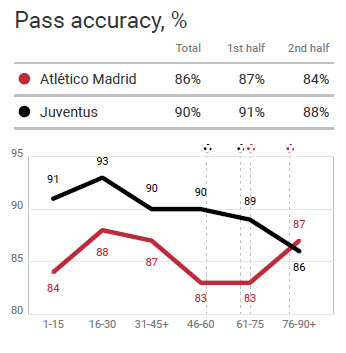 This was a match between Atlético Madrid’s consistency and Juventus’ momentary brilliance. The first half was a defensive affair, with both sides unable to create clear chances. This changed in the second half, as Juventus attacked more in transition. Atlético Madrid fell behind 2-0 and could have been more if Higuain had finished his chances, but then the Spaniards were able to eventually reap the reward for their efforts. Simeone’s side got a draw through two set-piece goals, and it seemed like a fair result for both sides.