Atlético Madrid travelled to the Reale Arena unbeaten in La Liga but put up little fight against Real Sociedad as the hosts ran rampant up against one of the favourites to win the league this season.

Real Madrid loanee Martin Ødegaard broke the deadlock with his effort from inside the box and it was former Arsenal man Nacho Monreal who added a second to put the tie to bed in the second half to seal a 2-0 victory.

This tactical analysis will consider the tactics which decided the battle in La Liga. Both Diego Simone and Imanol Alguacil looked to outsmart each other but it was Alguacil who came out on top, as this analysis will explain, supported by statistics.

Atlético Madrid lined up with a similar set-up to how they have throughout the season, only with Vitolo Machín coming into attack in the major change. Stefan Savić also replaced Mario Hermoso in a straight stop in the backline.

Alguacil was clearly looking for a reaction from his team following a disappointing defeat to Athletic Club. Portu came in for a debut in attack whilst Alexander Isak replaced Willian José. Igor Zubeldía was moved to midfield to replace Asier Illarramendi following his injury, with Monreal coming into the team at left-back for his debut and Aritz Elustondo replacing Zubeldía.

If one player had a decisive influence on this game, it was Ødegaard. Throughout the game he provided real problems to Atlético. Playing in the more advanced midfield role as a number 10, he had freedom to get in and attack the middle. It was also, perhaps unexpectedly, the game in which Simeone opted not to field a holding midfielder. Without Thomas Partey or Thomas Llorente in the starting line-up, there was no clear man to mark Ødegaard, with that role instead falling to Saúl Ñiguez or Koke Resurrección, neither of whom succeeded.

The result was that Ødegaard exploited the space between the midfield and defensive lines. Atlético have built much of their success around the notion of a rigid tactical structure but hugely disappointed in this regard against Eibar last time out and repeated the same issues against Real Sociedad. Ødegaard targeted this, immediately looking to get goalside of his two midfield markers without quite pressing high enough to be picked up by the defenders, who were already distracted by the front three. In the first goal, it was a clear benefit as it meant that after receiving the ball, he had time to take touches before finishing the effort into the bottom corner.

Ødegaard’s intelligence and positioning was something that took Atlético some time to get used to. Later on in the tie, Llorente was introduced at João Félix’s expense to try to mitigate Ødegaard’s influence but even then, Llorente failed to provide sufficient protection as the midfielder continued to receive more passes than any other Real Sociedad player in the transition to attack.

Again, it was Ødegaard’s positioning in this regard that was crucial in another way, this time on the counter. Whilst Atlético failed to register a single counter-attack, Real Sociedad had three, winning a corner from one and getting shots off from the other two. The end result is that this counter-attacking threat was essential to deciding the tie, even if it did not directly leaad to a goal in such a short space of time. Ødegaard was key to this.

The Norwegian would remain in a more advanced position, refusing to drop back as deep as the other central midfielders. From there, he would be ready for any pass as an attacking outlet. Once he received the ball, he would almost instantly be supported by at least one, usually two, of the attacking players ahead of him. Isak, Portu and Mikel Oyarzabal would use their pace to rapidly burst forwards. These runs would stretch the opposition defence, often allowing Ødegaard plenty of room to run through the middle himself without pressure, giving him time to play the perfect pass. 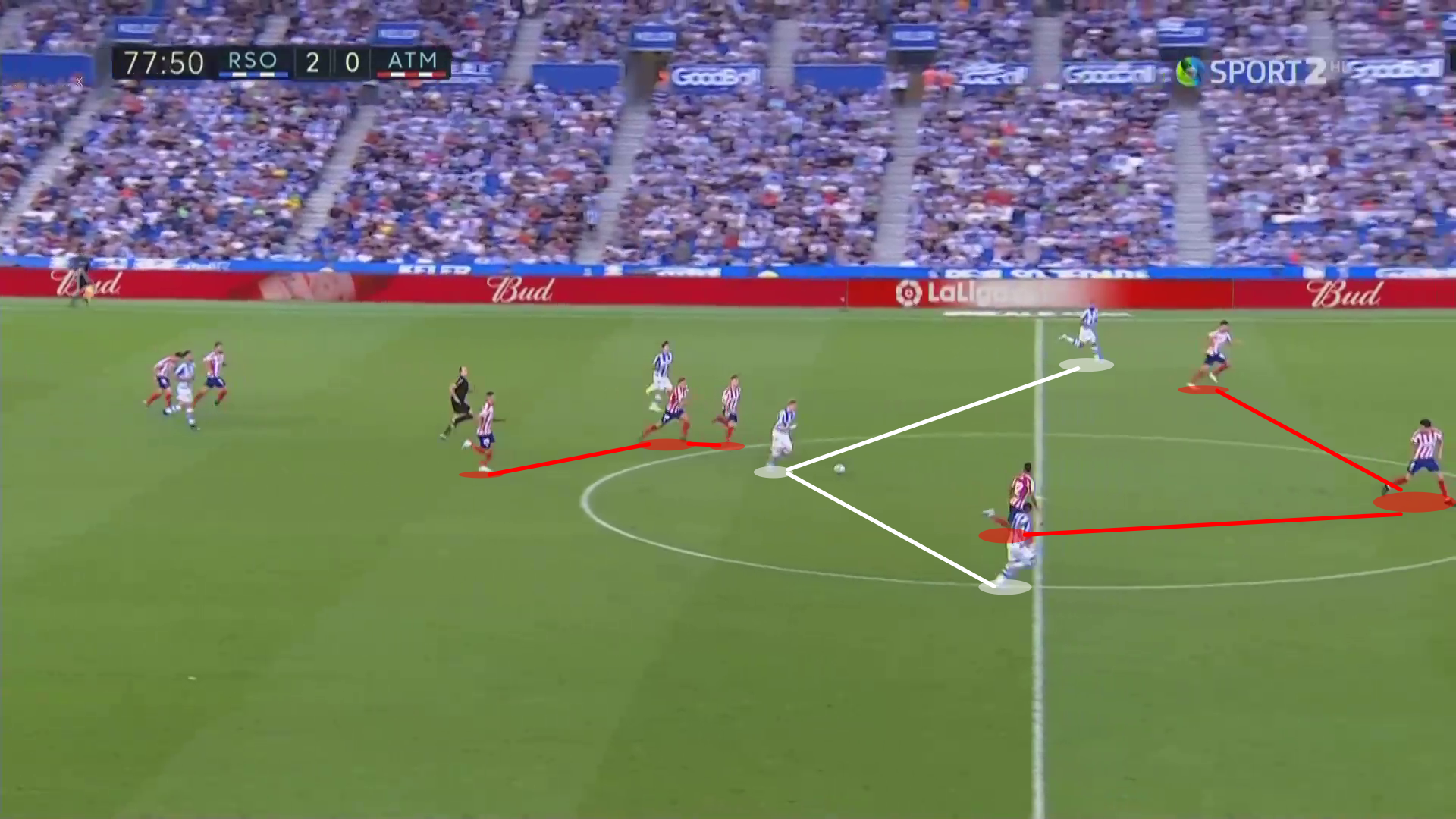 Ødegaard regularly led the attack, with wide runners stretching the Atlético defence.Real Sociedad dominated possession, with over 54% of play, but they still looked far more likely to score when possession turned over. Had that not been the case, Atlético may have been more relaxed on the ball and found a way through more successfully. However, the threat from Real Sociedad on the break proved to be a challenge for the unsettled Atlético backline who were already struggling in recent weeks.

Since the La Liga season began, Félix has struggled to live up to his €120 million transfer fee or his impressive pre-season form. His performance in San Sebastian, where he lasted just 55 minutes, was his worst yet. Deployed in more of a wide position, rather than the freedom of the second striker that he has been afforded until this fixture. Without such freedom, he looked lost in the set-up. In total, he received just 10 passes and his positioning did not help matters, repeatedly showing up in crowded positions.

He played only three passes in the final third, while his general pass completion rate of 67% was his worst yet in an Atlético shirt. These figures reflect his woeful influence on the game, being almost non-existent for much of the tie. As his heatmap shows, Félix did not have an influence over any one area in particular at any point of the game. Marked well by Monreal and with protection from the midfield in front of him, Real Sociedad nullified the little threat that he posed.

This must give Simeone real food for thought. The coach clearly felt that he must give a chance to Vitolo from the start given his impressive cameos in the past two fixtures, scoring two goals, but in doing so he was forced to move Félix to an area where he is not accustomed. It is normal that the Portugal internationoal may take some time to adapt, but with Álvaro Morata out injured and Diego Costa struggling for consistency, Simeone needs Félix to step up with a piece of magic more regularly.

To pin the faults of Atlético’s performance on Félix would be wrong. Particularly as much of the fault of their play came from their poor creation. The side looked disjointed and they failed to build up any real passing moves. In fact, Alético registered 18% fewer passes than on average, with only 300 completed passes. This was evident, particularly when they tried to play out from the back and came up against Real Sociedad’s high pressing style of engaging once the ball entered the middle third.

The below example provides a good example. Frequently, Atlético would attempt to play the ball out, with José María Giménez or Savić looking to play the ball into midfield to take it forwards. However, three or even four players would rapidly press, immediately plying the pressure and forcing the midfielder, in this case Thomas Lemar, to give the ball back to the defence, starting an infinite cycle of wasted possession.

Again, the introduction of a holding midfielder may have helped Atlético in this part of the game to build up the transition more gradually. With the pressure on and full-backs often pinned back by Real Sociedad’s wingers, Atlético struggled to penetrate their rival’s defence at any point in the game. With little movement and intense pressing once on the ball, Real Sociedad’s youthful energy and determination were decisive factors in preventing Atlético from ever gaining any kind of momentum.

This was a very disappointing display from Simeone’s men, only days before they welcome Juventus to the Estadio Wanda Metropolitano. It must be recognised though, that Real Sociedad produced an excellent display, playing to their strengths, all of which are very different to those of the Italian side. Their energy and movement, particularly on the counter and through Ødegaard, proved to be sufficient to send their fans home with the three points after a memorable victory in which Atlético provided little competition.