Liverpool came into this Premier League weekend as the only side with a perfect record, having won all four of their league games so far. With Manchester City two points behind the Reds, this was an early chance to put pressure on their title rivals. Newcastle United had managed to pick up an away win at Spurs, but apart from that, the Magpies had struggled to show anything to suggest that they would not be fighting a relegation battle this season. Nevertheless, it is games like these which had been Liverpool’s undoing in the title race last season, and therefore Jürgen Klopp needed his side to deliver all three points to maintain their momentum. This tactical analysis piece will look at both sides’ tactics and how they influenced the result. 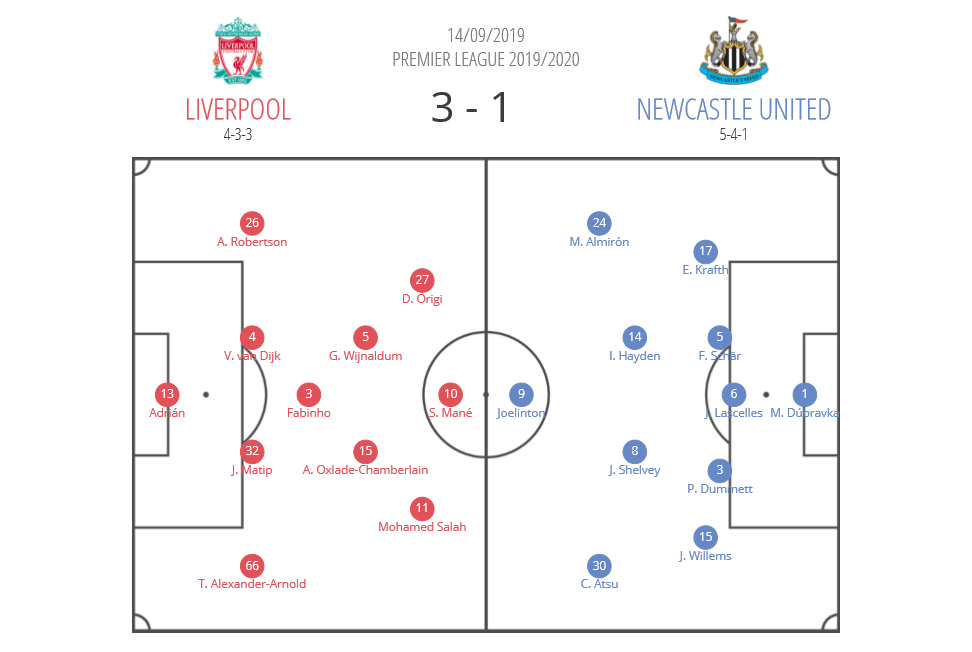 Klopp elected to rest Roberto Firmino and Jordan Henderson after their international commitments, with Divock Origi and Alex Oxlade-Chamberlain coming into the side instead. Adrián continued in goal in the injury-enforced absence of first-choice Alisson.

Steve Bruce sent his side out in a 5-4-1 formation, with Jetro Willems and Emil Krafth as the wing-backs. Jonjo Shelvey started against his previous side due to Sean Longstaff’s injury, while Christian Atsu and Miguel Almirón were the attacking midfielders tasked with supporting Joelinton.

Newcastle’s gameplan was an obvious one – sit deep, deny Liverpool any space centrally or in behind and then hit them on the counter-attack. Despite how clear this plan was, the home side found it difficult to bypass it. Klopp, in his post-match interview, alluded to this, saying that the international break had caused a little bit of a drop in fluency and tempo, and this was quite evident in the opening minutes. Newcastle made no attempt to try and win the ball high up the pitch; they were quite content to sit back and allow the home side to dominate possession –

Liverpool’s passing was too slow in the opening stages of the game, allowing Newcastle to have enough time to shut off any passing lanes or options that may open up centrally –

While Liverpool struggled to break Newcastle down, the Magpies’ strategy of playing on the counter-attack paid instant dividends. Liverpool were playing with an extremely high defensive line, which made them susceptible to long passes in behind. This, combined with their midfield’s tendency to push up and press the opposition, led to Newcastle’s opening goal.

This was seen in the second half as well, where Liverpool’s high line, allied with lack of pressure in midfield, allowed Newcastle to create a good shooting opportunity for Krafth which he could not convert –

This is an occupational hazard for Liverpool – their style of play means that they will always be vulnerable to such direct football. In any case, the home side were able to wrest back the advantage following the introduction of Firmino from the bench.

Most Liverpool-watchers will tell you that Firmino is one of the most important players for this side, despite being overshadowed by the goalscoring exploits of Mohamed Salah and Sadio Mané. His impact on this match was almost instant, as he tracked back to dispossess Atsu and set up Mané for Liverpool’s second goal.

Firmino’s work rate and intelligence off the ball are the biggest reasons for his importance to Klopp’s side. Along with leading the press from the front, he is also extremely intelligent in his movement.

These are just a couple of examples of how Firmino’s off the ball movement allowed Liverpool to increase the tempo of their passing and create space for their attackers. They improved by leaps and bounds in this regard in the second half and should have scored more than just one goal in that period.

Liverpool were much better in the second half, playing with a much higher tempo to their passing and making off-the-ball runs to create space. The intelligence of their movement was what made it difficult for Newcastle – there would always be a third-man run being made into space that had been vacated by a teammate coming short or going inside. Trent Alexander-Arnold and Andy Robertson, the full-backs, were instrumental in this regard, stretching the play by staying wide but also dovetailing well with the front three to pull the Newcastle defensive line out of shape.

Such integrated movement is the key to breaking down deep defences, and Liverpool were able to utilize the speed and intelligence of their players to achieve this.

While the Reds may have struggled to get going from the start, they were eventually able to overcome Newcastle’s defensive block and secure a comfortable victory. This was their 14th win on the trot in the league, and with Manchester City losing to Norwich City later in the day, it meant that they already have a five-point lead at the top of the table. It promises to be another title race which will go down to the wire, and this win could prove to be extremely important come the end of the season.