Fiorentina and Juventus are both massive names of the Italian game but came into the third match of the 2019/20 Serie A season after very contrasting starts. Maurizio Sarri’s men were one of three sides to have a perfect record so far amassing six points, while Vincenzo Montella’s Fiorentina were yet to pick up a point, languishing near the bottom end of the table.

Both sides started this season with a similar ilk to how they ended last season. Fiorentina went on a massive streak of not winning a single match, while Juventus comfortably secured yet another Serie A title.

Fiorentina sat 16th in the Serie A ahead of this match, after disappointing defeats to Napoli and Genoa in their opening two fixtures. Juventus were third after narrowly beating Parma and beating Napoli in a dramatic match.  I Bianconeri welcomed Sarri to the sidelines for the first time after he was absent from the previous two games as he was still recovering from an illness.

In this tactical analysis, I’ll take a look at how Vincenzo Montella frustrated Juventus’s tactics and held them to a 0-0 draw, and how La Viola were unlucky to pick up all three points.

Fiorentina lined up in a 3-5-2 shape. Bartłomiej Drągowski started in goal behind a back three of Germán Pezzella, Nikola Milenković, and former Juventus defender Martín Cáceres. Dalbert and Pol Lirola flanked a midfield consisting of Erick Pulgar, Milan Badelj, and Gaetano Castrovilli. A makeshift striking duo of Franck Ribéry and Federico Chiesa.

Juventus once again lined up in a 4-3-3/4-4-2 hybrid. Wojciech Szczęsny was protected by a back four of Danilo, Leonardo Bonucci, Matthijs de Ligt, and Alex Sandro.  A fluid three of Miralem Pjanić, Sami Khedira and Blaise Matuidi started in the midfield. While Douglas Costa, Gonzalo Higuaín, and Cristiano Ronaldo completed an asymmetric front line.

When out of possession, Fiorentina did not press Juventus’s first phase of build-up in the beginning of the match. They’d try to limit any central passes, especially to Pjanić, as Fiorentina knew he was their chief ball progressor from deep. Fiorentina held a narrow triangular shape, with two strikers forcing the play out wide and a deeper player not allowing passes into Pjanić.

The home side stepped up their pressing intensity after about 15 minutes, which led to some close scares for Juventus. Szczęsny had a very close call when he passed the ball straight to Chiesa, and was lucky not to concede. Just minutes later Juventus attempted to play the ball across the six-yard box but Fiorentina won a corner after a dangerous pass to Szczęsny found Ribéry. When forced into their own half, Fiorentina fell into a compact 5-3-2. This shape had little space between the midfield and defensive lines but allowed Ribéry and Chiesa to stay in an advanced position in preparation for a transition.

When the home side had the ball in more advanced areas of the pitch, Fiorentina kept a positional balance. What I mean by this is that they ensured that each zone (centre, both wings, and both halfspaces) was always occupied by a Fiorentina player. Juventus struggled to deal with this and their shape tended to be attracted to the side where Fiorentina had more players as well as the position of the ball. This is one of the negative side effects that Juventus’s new positional defence poses.

Fiorentina exploited this by underloading the ball-far side which led to the wingback on that side in space, this led to the majority of Fiorentina’s chances stemming from their wingbacks.

This wide attacking structure employed by Fiorentina led to them having 19 crosses.

Juventus struggled to press Fiorentina’s first line of build-up. This was due to Fiorentina always having a numerical advantage. This was caused by Juventus pressing with two or three players at once. Fiorentina always had four as Badelj would drop just ahead of the back three to create a press-resistant diamond shape in the build-up.

The wide centre backs (Milenković and Cáceres) would step up in line with Badelj so that the Croatian had wide options and was not always forced to pass backwards to Pezzela or play a long ball wide to the wingbacks.

As you can see in the above images, Fiorentina made a more pragmatic diamond shape when pressed by three, and advanced their wide centre backs more when only facing two Juventus players.

As I mentioned in my last analysis of a Juventus match, the away side did not employ a standard 4-3-3 or 4-4-2, but rather a hybrid between the two. They used this shape once again. This was created to balance Ronaldo’s central position alongside Higuaín as they acted as a striking duo. As Ronaldo’s typical positioning would usually be on the left of a front three in a 4-3-3, Matuidi would push wide on that side to balance the formation. Interestingly, Khedira would play in a similar role while Douglas Costa played more centrally, but not to the extent of Ronaldo’s central positioning.

When attacking, Juventus created a gap in the halfspace by using pinning and the positioning of their fullbacks. In the below examples, Ronaldo pins Cáceres while Danilo attracts Fiorentina’s wingback, which creates the gap in the halfspace. Juventus’s midfielders also prevented Fiorentina’s central players from plugging this hole, which was potentially dangerous as Khedira often found himself on that side. Douglas Costa could also exploit this, but he was often central as seen in the below images. 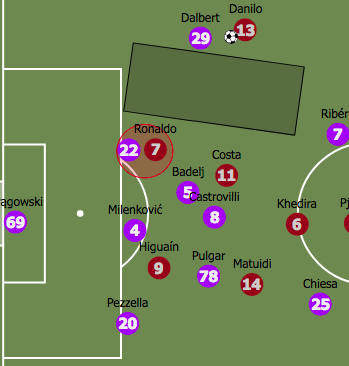 Like their opponent’s, Most of Juventus’s play came down the left (45%). However, they did not resort to crosses nearly as much as Fiorentina, with Juventus crossing the ball 9 times. This was due to the differing attacking structure Juventus had on the left compared to their opponents. A typical movement would see Sandro receive the ball and Matuidi overlapping him out wide. Matuidi’s movement would drag the Fiorentina players with him, giving central space from Sandro to dribble or pass into.

This attacking structure led to Juventus moving centrally after playing wide, rather than staying wide and crossing.

Before the match, Fiorentina would’ve happily taken a draw at home to the reigning champions. However, La Viola will be disappointed that they couldn’t take all three points off of Juventus. They pressed Juventus effectively, as well as nullifying their attack well, and the statistics point to Fiorentina being the better side. Fiorentina had a total xG value of 1.6 in comparison to Juventus’s 0.4.

A draw isn’t the worst result for Fiorentina, though. Vincenzo Montella will be happy to finally put a point on the board this season. Fiorentina’s next matches are also difficult, they travel to Atalanta before hosting Sampdoria after that before facing AC Milan. They’ll be encouraged by a good performance and hope to carry this momentum into their next matches.

As for Juventus, they travel to Madrid as they face Atlético Madrid in the Champions League Group Stage. In the league, they have an easier time compared to Fiorentina. Juventus host newly-promoted Hellas Verona next time out in the Serie A, before travelling to another promoted team in Brescia. Maurizio Sarri will be concerned that they couldn’t beat a Fiorentina side that has struggled immensely in recent months, Fiorentina’s last win in the league came against SPAL in February 2019. Even more, worrying for Sarri is that they were tactically outclassed by Fiorentina throughout the match, and were lucky to even take home a point. However, “Sarriball” will take a while to bed in properly, and we can expect results to improve for Juventus as they become more accustomed to Sarri’s ideas.