In the opening fixture for the 2019/20 Serie A season, Parma hosted Serie A champions Juventus at the Stadio Ennio Tardini. Juventus had received bad news beforehand, as newly appointed manager Maurizio Sarri would be absent from the sidelines due to health reasons.

In this tactical analysis, I’ll provide an analysis of the tactics Juventus used to defeat Parma in the opening Serie A match. 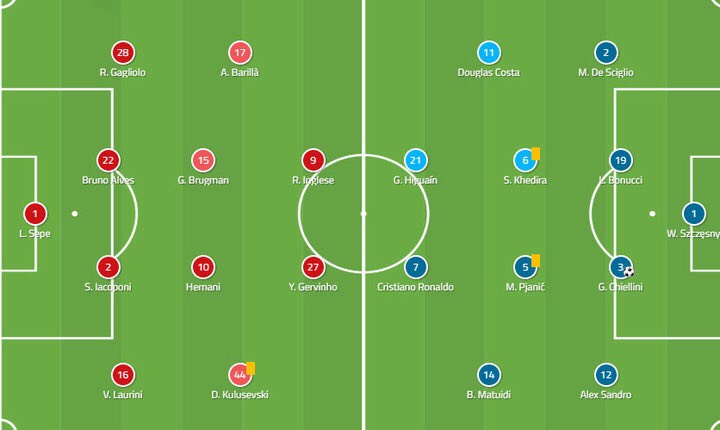 Parma lined up in a 4-3-3 formation. Luigi Sepe started in goal. The Napoli loanee was protected by a back four consisting of center-back pairing Simone Iacoponi and veteran Bruno Alves. Full backs Vincent Laurini and Riccardo Gagliolo flanked them. Ahead of the backline was a midfield trio of new signing Hernani, Gastón Brugman, and Antonino Barillà. Wingers Dejan Kulusevski and Gervinho played either side of the main striker Roberto Inglese.

Varied wide movements for both sides

As expected, Ronaldo acted as an auxiliary striker, positioning himself centrally near Higuaín, creating a striking duo. Both Higuaín and Ronaldo would drop off to find space between the lines, and connect the midfield and forward units. Alex Sandro would overlap, creating width on the left side with Matuidi also finding himself wide on the left often. Khedira also drifted out wide to the right from his central position to aid De Sciglio who overlapped as Douglas Costa moved centrally in a supporting role to Higuaín and Ronaldo.

Parma had a similar situation with their wide men. Left-back Gagliolo did not provide attacking width, instead, he acted as a wide center-back, providing more defensive solidity. Barillà strayed wide on the left to compensate for this, while Gervinho and Kulusevski played close to Inglese, forming a narrow front three. Laurini overlapped Kulusevski on the right, allowing Hernani to maintain his central position in the midfield.

Both Parma and Juventus’ wide movements made their shape more akin to a 4-4-2/4-3-3 hybrid.

Parma implemented a two-phased build-up approach. At first, they’d play short, drawing in the Juventus pressure. As soon as they sensed danger, they would hit a long ball into the space created by the press.

When pressing, Juventus would have the winger and midfielder from that side move towards the ball-carrier. Khedira and Costa did this the most, as the majority (38%) of Parma’s attacks come down Juventus’s right side. When Parma were attacking centrally, Ronaldo and Higuaín looked to shepherd the ball out wide.

As expected, Pjanić was deployed in the “Jorginho Role”, the player that connects the first phase of build-up with the offensive unit. He would drop the deepest out of the midfield three, occasionally finding himself as a third center-back. Juventus would always look to him as the chief ball progressor, this is shown by the passing statistics, Pjanić completed the most passes (97) out of any player. He was a key factor in Juventus keeping 61% of the ball.

Parma did not look to press Juventus’s first phase of build-up, rather, they’d look to cut out passing lanes in the midfield. This defensive style allowed them to keep their shape when out of possession.

As Juventus progressed, Parma fell into a narrow low block. This allowed Juventus space in the wide areas, usually occupied by the full-backs, as the wingers usually would move centrally in an attempt to create more passing options inside Parma’s low block.

Juventus found it difficult to break down Parma’s compact defensive shape. They were forced to resort to playing out wide and crossing the ball, as they lacked the creative spark which would enable them to penetrate Parma’s defensive shape. Juventus crossed the ball 27 times, with only 4 of them reaching their intended target.

It was immediately present that Parma had made some tactical changes during the interval. They began the second period with a much more intense press, as opposed to keeping their shape as they did in the first half. Juventus were ill-prepared for this press, giving the ball away 18 times in the second half in comparison to 9 during the first half.

Ronaldo was the main target for almost all of Juventus’s attacking play. He took the most shots out of any player (4) and had a goal disallowed for a very tight offside call. However, Ronaldo’s finishing overall was poor, he could have easily scored two or three goals. On the contrary, his positioning allowed Juventus much more space in Parma’s defensive third, he dropped deep to collect the ball. This is a worrying sign, however, that Juventus may lack a creative spark in their midfield. Paulo Dybala has been heavily linked with a move away from Juventus, but he has the attributes to be the creative force in the final third, unlocking compact defenses, and putting less of the creative burden on the shoulders of Pjanić.

Juventus did not play to their best. They were quite unlucky to not have scored more than just the one goal, but they struggled to break down Parma’s defensive shape, which is worrying. However, we all know that Sarri’s system will take time to bed in with the Juventus squad, and not having the Italian tactician on the sidelines made a clear difference. Juventus face a tougher test next time out, as they host last season’s runners up Napoli at the Allianz Stadium.

As for Parma, they’ll feel hard done by to not pick up any points after a solid performance. Roberto D’Aversa will be pleased that they maintained a solid defensive shape to stifle Juventus throughout the match, as well as causing problems for Juventus’s defence. Parma travels to Udinese next time out, hoping for an improvement in the results department.