This fixture on the second matchday of this year’s Bundesliga season promised to be an interesting match between Fortuna Düsseldorf and Leverkusen since both teams were able to win their first match of this season. Düsseldorf bet Bremen 3-1 away from home and Leverkusen were able to secure a home victory against the promoted team Paderborn.

Youngster Kai Havertz and striker Kevin Volland, especially, had impressive performances on matchday one. On the other side, Düsseldorf showed a good team performance against Bremen and were able to get the three points even though they were the underdogs.

In this tactical analysis, we will examine Leverkusen’s tactics which helped them to beat Friedhelm Funkel’s team 3-1.

Peter Bosz lined his team up in his typical 4-3-3/4-1-4-1 hybrid formation. Even though Leverkusen played during the pre-season and on the first matchday against Paderborn with a 3-4-2-1 of sorts, the Dutch coach lined his team this time in his usual set-up. He already used the 4-3-3 formation during his time at Ajax.

Lukas Hradecky was the goalkeeper and the back four was made of the Brazilian left-back Wendell, Jonathan Tah and the two twins Lars Bender and Sven Bender. Lars Bender is usually a defensive midfielder but played as a right-back.

The Chilean Charles Aránguiz was the only defensive midfielder behind the two central midfielders Havertz and Kerem Demirbay who had different tasks as we will see later in this analysis. The wingers were Leon Bailey and Karim Bellarabi who both are well-known for their incredible pace and ability to dribble past defenders. The single striker was Volland who scored one goal and assisted one in the first matchday.

The home team Düsseldorf used the same lineup as they did in their first game of this Bundesliga season against Bremen. Since they played well and were able to get away with three points, it’s logical that Funkel didn’t change anything.

The young American Zack Steffen was once more between the sticks and the back four consisted of Niko Gießelmann, André Hoffmann and Matthias Zimmermann as well as the Turkish international Kaan Ayhan.

The central midfield was made of Alfredo Morales and Lewis Baker while Kenan Karaman acted as a hybrid between an offensive midfielder and the second striker. The real striker in Düsseldorf’s squad was the 31-year-old Rouwen Hennings. The wide areas were occupied by Markus Suttner and Erik Thommy.

Everyone expected Bosz’s team to dominate the game since Düsseldorf was the clear underdog and they had 70.82% possession in their last match. Besides, Bosz’s teams are known for their dominant style of play. Leverkusen average 60.65% possession in all their games in the calendar year of 2019.

During their build-up, the full-backs were positioned very wide near the touchline but stayed deep. The two central midfielders Havertz and Demirbay positioned themselves very high while Aránguiz also stayed deep. The two wingers were also mostly positioned in the wide areas, but both sometimes shifted inside to overload the centre. As always, the German forward Volland didn’t just stay in the centre up front, but tried to find free spaces and create passing lanes in the half-spaces or sometimes even on the wing. In light of this, their formation during the build-up looked like a 4-3-3 as the three forwards and the two central midfielders had a lot of freedom in the last third.

Aránguiz and the two centre-backs were responsible for the ball circulation during the build-up but as we will see later on Leverkusen tried to get into the final third with vertical passes as soon as they had the option. Until they were able to play a vertical penetrating pass they stayed patient and the back four, as well as the Chilean defensive midfielder, passed the ball to each other.

Aránguiz mostly positioned himself between the two Düsseldorf strikers Hennings and Karaman. Besides, he was always a bit higher positioned than his opponents, so if the passing lane was free, it was easy for Tah and Bender to pass the ball to the defensive midfielder and easily overcome the opposition’s strikers. 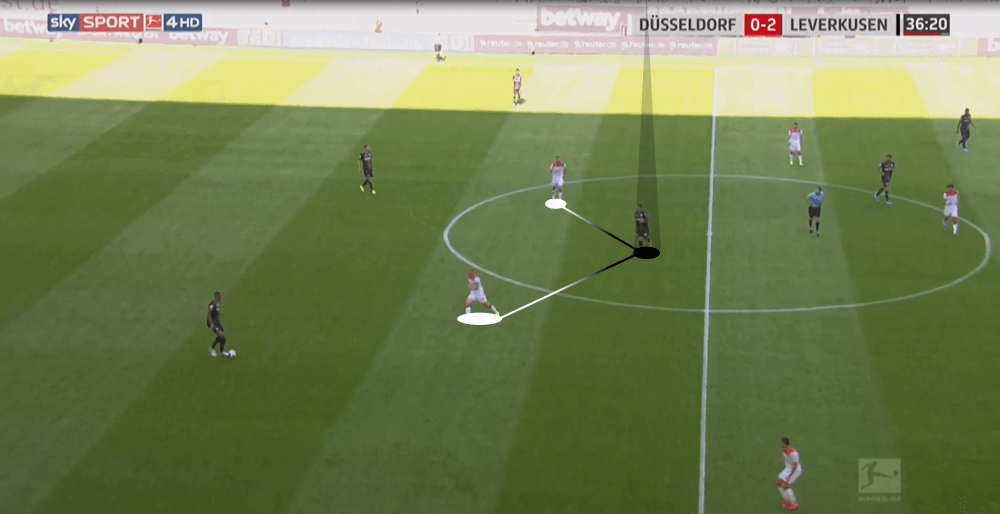 Düsseldorf defended most of the time with a 4-4-2 and put pressure on Leverkusen’s centre-backs at about the height of the half-way line. However, Havertz and Demirbay as well as the wingers and Volland on some occasions, regularly moved into the free spaces to receive vertical passes. From there on they used their individual class to create goalscoring opportunities. Havertz especially is great in solving situations when he receives such vertical passes with his opponent on his back.

It didn’t even take six minutes until they were able to score the first goal of the match. Until then they already were able to create two goalscoring opportunities after such vertical passes. Before the goal, Leverkusen won the ball back in their own half and the right-back Bender played a simple pass to the deeper positioned winger Bellarabi who instantly found Havertz with a vertical pass.

The young German just needed two touches to play a through ball to Volland who drifted outside to have more space. He dribbled vertically, got past Düsseldorf’s defender and delivered a powerful cross. Baker scored an own goal, but it would be unfair to blame him since he had to try to touch and clear the ball otherwise Demirbay surely would have scored. Leverkusen just needed two vertical passes and a good dribble by Volland score the first goal of the day. 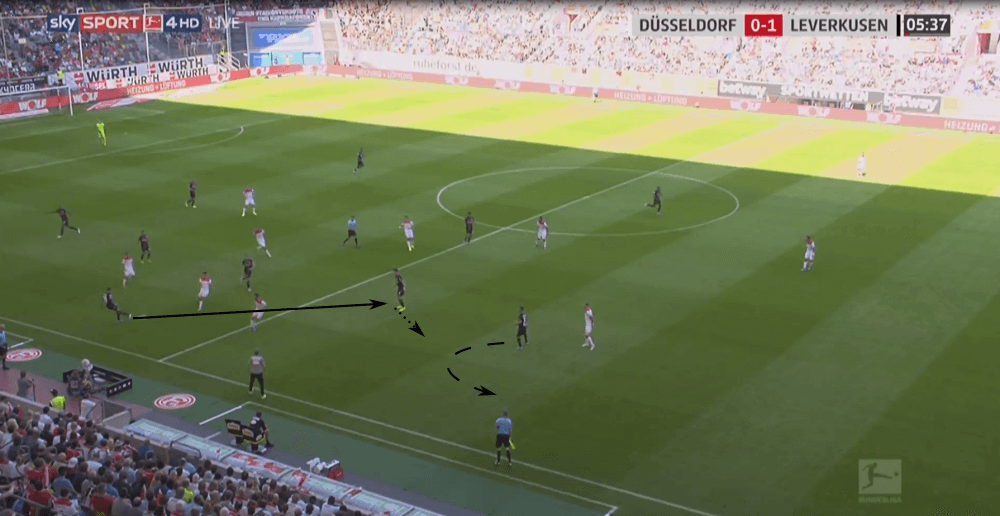 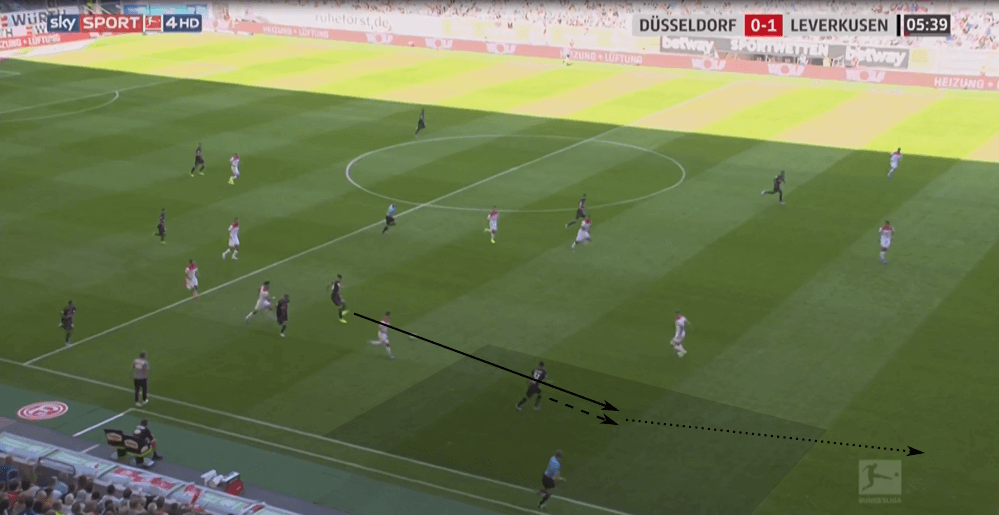 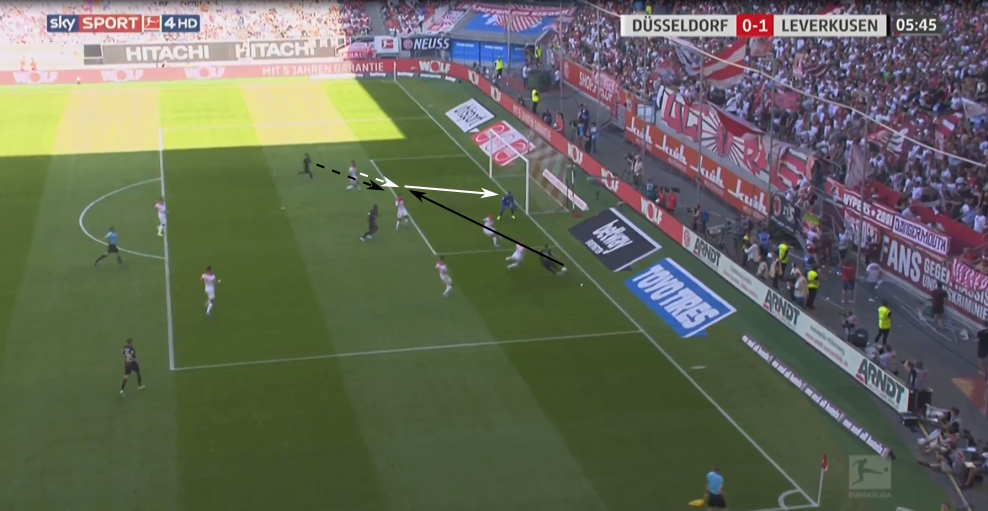 Although, Funkel’s team also tried to press high in some situations to pressure Leverkusen’s measured build-up. However, the Werkself managed to solve these pressing situations with short passes or with Hradecky playing a long ball. Following this, Leverkusen immediately started to press Düsseldorf as explained in the next paragraph. In light of this, it was brave from Düsseldorf, but it didn’t really pay off since they didn’t press with enough players. As a result, Leverkusen always had a numerical superiority as shown in the shot below.

Düsseldorf struggling in the first half

We just need to compare two values of each team to show how Funkel’s team had problems to build up their attacks from the back. In the first half of the match, Leverkusen played 6.15 passes per period of possession on average while on the other side, Düsseldorf had a mere 2.72. Furthermore, just 81.6% of Fortuna’s passes were successful. On the other side, the Werkself had a success rate of 90.18%.

These four values describe the match in the first half pretty well. Leverkusen was able to have longer periods of possession because Düsseldorf gave them space and attacked them just at the height of the half-way line or tried to put pressure on them but didn’t execute it well. On the other side, the Fortuna was unable to pass freely because Bosz’s team aggressively pressed them as shown in the example below.

However, since Leverkusen was able to score so early, they didn’t permanently press in at the Fortuna and sometimes sat back a bit deeper in their 4-1-4-1 formation. But even then, Funkel’s team wasn’t able to create goalscoring chances. They shot just four times during the first half but Hradecky never had to worry since their shots were not dangerous, as highlighted in their xG-value of 0.2.

After the 1-0, Leverkusen was able to dominate the game but the two other goals in the half both were a result of the individual class of Leverkusen’s players. The 2-0 was scored by Aránguiz who was able to control a cross after a freekick with his chest and then scored a beautifully struck shot. The 3-0 came shortly before half-time and was scored by Bellarabi who just had to tap in after another great dribbling sequence by Volland. So, the half-time score was 3-0 and the game was decided.

It was just logical that Leverkusen wouldn’t play with full energy and engagement in the second half since the winner was already clear. However, both coaches made little adjustments and since Düsseldorf wanted to show a good performance in the second half, the remaining 45 minutes were interesting.

Funkel also made a little adjustment to his team’s defensive structure. Karaman now positioned himself behind Hennings and followed Aránguiz. Also, the two central midfielders looked more after Demirbay and Havertz. All in all, they man-marked the three central midfielders of Leverkusen.

Because of the combination of this adjustment and the fact that the Werkself went into power-saving mode, Düsseldorf was able to avoid conceding the fourth goal and pulled one back in the 82nd minute, however, Leverkusen’s victory was never in danger.

As this analysis showed, Düsseldorf’s performance in the first half was disappointing and on the other side, Leverkusen was totally focused from the beginning. It was once more Volland, who was among the best players on the pitch. He now has three assists and has one goal after two games in the Bundesliga.

Funkel can’t be happy with his team’s performance in the first half. However, not every team in the Bundesliga has got the same quality as Leverkusen and would be able to score three times in the first 45 minutes. Düsseldorf will face Frankfurt next and are once more the underdogs while Leverkusen will play against Hoffenheim who lost their first game this season but won the second against Bremen.