Bayer Leverkusen have an exciting squad that is built around a group of very talented young players. Specifically, the likes of Kai Havertz, Leon Bailey, and Jonathan Tah have excelled in recent seasons. Last year was a success as they pipped Borussia Mönchengladbach, Wolfsburg, and Eintracht Frankfurt to a fourth-place finish. They took the last Champions League qualification spot – a competition that Bayer had missed out on qualifying for in the last two seasons.

Yet last season had been far from smooth sailing, and a managerial change in December was what it took to spark Leverkusen’s season into life.

This season preview and scout report will look at how Bayer Leverkusen will build upon their fourth-place finish last season, and through analysis, will predict how their new signings will fair with the tactics employed by manager Peter Bosz.

As Bayer sat in ninth-place in the Bundesliga last December, the board decided it was time to part ways with Heiko Herrlich, and appoint Peter Bosz. Bosz, a dutch manager with excellent pedigree, had previously managed Ajax and Borussia Dortmund.

With great pressure on his shoulders and a few rough patches along the way, Bosz did an excellent job steering Bayer Leverkusen to a fourth-place finish.

The Bundesliga will be wary that Bosz has now had a full pre-season to fully bed in his ideas. Leverkusen will be looking to solidify their position in Germany as a Champions League side. They missed out on qualification in the two years prior to last season.

Bosz likes his teams to play passing football, but also wants his attacking players to get onto the ball quickly.

He uses three ball-playing centre-midfielders. He allows the two attacking-midfielders out of the three the license to roam between the defensive lines in order to create space.

Their passing football often involves rotational-movement, predominantly in midfield, with quick interchanges between players. They ranked second last season in the league for passes per minute of possession, with 16.8 passes. They also enjoyed an average of 59.2% possession per game. That was also the second-highest percentage in the league.

Bosz also likes his midfield to play well-placed long balls for his front-three to run onto behind the back four. Both Julian Baumgartlinger and Havertz were the top two players in the Bundesliga last season for long pass accuracy.

Following the departure this summer of Julian Brandt, Leverkusen had to move quickly to replace the hole in the side this transfer had left. Brandt was excellent last season forming one of the most exciting, young, attacking midfield partnerships with Havertz. Together in the league, they combined for a total of 24 goals and 14 assists. Brandt left for Borussia Dortmund for a cut-price fee this summer, reportedly around £22.5million. A bargain in today’s market.

That money was reinvested straight away as Bayer looked to bolster their midfield without missing a beat.

Central-midfielder Kerem Demirbay joined from Hoffenheim in a deal worth £28.8 million. Demirbay will likely be a straight swap for Brandt in centre-midfield. Although not quite the player Brandt is, he is nevertheless an excellent replacement and will add goals and creativity to the side.

Demirbay had a much-needed return to form last season, registering five goals and nine assists, following a disappointing 2017/18 season that was ravaged by injuries. He missed a total of 15 games that season whilst in the treatment room.

Although not quite the attacking force that Brandt is, Demirbay offers more defensively. In 2018/19 he engaged in almost twice the amount of defensive duels per game as Brandt did, and made 4.83 interceptions per game, compared to Brandt’s 2.35. This may well see him used in a slightly deeper role than Brandt.

Diaby will be seeking regular playing time, after having to compete with Neymar for a starting berth the last two seasons. He still scored four goals and provided six assists last season, despite only making 14 starts in 33 appearances in all competitions. Bayer will be hoping for an even better return from Diaby this season if he is provided the playing time.

At the beginning of last season, Brandt was used as a winger, but Diaby is a different kind of player. When Brandt played as a winger in a 4-3-3, the attacking intent of the left-back Wendell meant that Brandt would often drift inside unmarked. Wendell was able to occupy the entire left-flank at times, and Brandt could move into space to receive the ball in central positions.

As opposed to Brandt who would drift inside, we can see from Diaby’s heat map that he is a more traditional winger, operating in wider areas.

It was in the second half of the season that Brandt played more as a left-attacking-midfielder, in the midfield three with Havertz and Baumgartlinger. It is no coincidence Bayer Leverkusen have signed a left-winger and an attacking midfielder. Although Brandt was normally utilised in the middle by Bosz, it still goes to show the impact of Brandt, that he has had to be replaced by two players.

The last signing that is worth mentioning is that of Nadiem Amiri from Hoffenheim for £8.1 million. The 22-year-old German attacking midfielder missed 20 games last season through injury. If Bayer can get him back to full fitness, he could turn out to be an astute acquisition.

Amiri is an excellent ball distributor, completing 87.7% of his passes last season. He is skillful with the ability to take players on. He also crosses accurately from wide positions and can take shots from range. Last season he averaged 0.34 goals per game, with a 47.1% shooting accuracy. Throughout his time in the Bundesliga, he has hit the target with 37.8% of his shots.

Looking at his shooting map, he is a player with a penchant for shooting from long range and has good accuracy. However, there is a notable drop off in accuracy from around 25 yards out, at 7.14%. As Amiri matures as a player he might begin to reign his range in. Regardless, it is clear to see how talented he is from long range.

Under Bosz, Bayer played a 4-3-3 in 80% of their fixtures, using a 4-2-3-1 in the remaining 20%. It was the emergence of 20-year-old attacking midfielder Kai Havertz, that led to these formations being used. Havertz scored 20 goals last season and had 4 assists. Under Bosz, Havertz scored 0.6 goals per game, whereas before he was scoring 0.35 goals per game.

Despite the evidence suggesting Havertz scores more when playing in a 4-3-3, rather than a 4-2-3-1, Bosz is showing an interest in making the latter formation work. Bosz used the formation for the last three games of the 18/19 season and it has featured heavily in pre-season.

In the line-up below, Demirbay sits as a deep-lying playmaker and Havertz plays behind the striker.

Bosz has also hinted in pre-season that he may venture outside of his two favoured formations. He has fielded a 4-4-2, as well as an incredibly attacking 3-4-1-2 formation this summer.

However, if Bosz stays with his favoured 4-3-3, Leverkusen may line up like this on the opening weekend of the season. 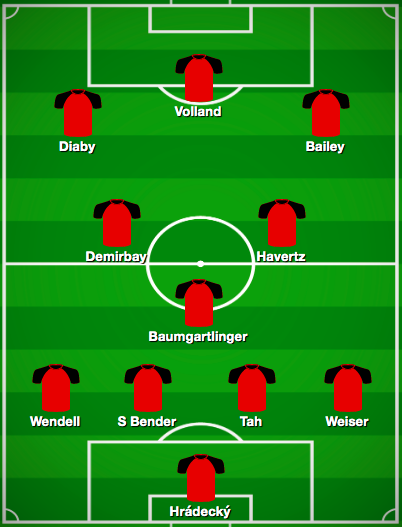 Bosz’s side build-up from the back, with Bayer’s centre-back’s often trusted with bringing the ball up to start the attack themselves. However, Julian Baumgartlinger will always drop deep and show to receive the ball, whether he receives it or not. By doing so he creates space behind him for Bayer’s attacking midfielders to work in.

Baumgartlinger is an excellent tempo-setter. He either looks for a sharp forward pass or uses his excellent long passing ability to play the ball early into the front three.

Bayer are not short of quick options with their front three. Diaby will fit in well with Bailey, Bellarabi, and Volland. When the ball is played over the top, Bosz wants his front three to be as flat as possible and get behind the backline. It is dangerous to play a high line against Bayer for this reason. The high positioning of Bayer’s full-backs allows the midfield three to appear like they take up a lot more space than they actually do. Their front three can, therefore, afford to push up higher and play on the back four.

Havertz and Demiray will be expected to work in tandem as Havertz and Brandt did last season. The two young Germans built up a wonderful understanding of each other’s game. They would frequently manipulate movement in and out of space, for the other to receive the ball unmarked. Bosz will want to see Demiray making runs similar to what we see in the tactical analysis below.

When coming deeper to get the ball they will often take wider positions, leaving the centre of the pitch free. They are then able to move into the space to receive. 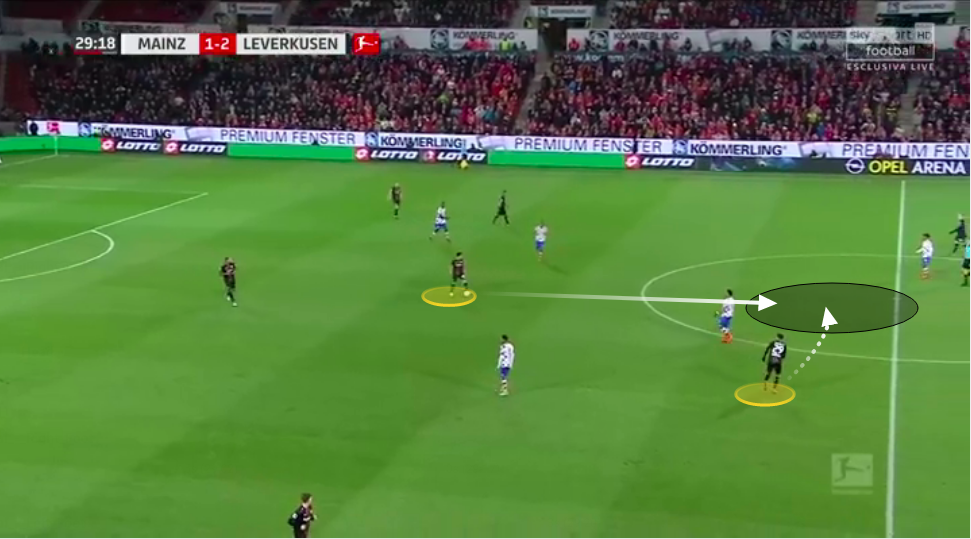 However, Bosz is happy for his two attacking-midfielders to roam forward without the ball and let one of the centre-backs or Baumgartlinger bring it forward themselves. This creates more attacking options.

We can see this below as there are five attacking players available to receive the ball. 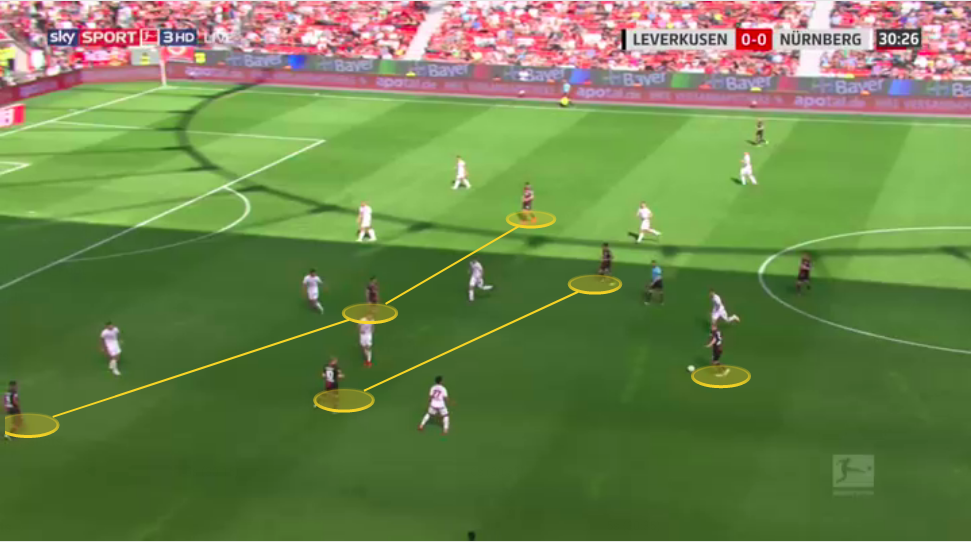 Leverkusen were one of the best pressing sides in the Bundesliga last season. They registered a league high seven in duels, tackles, and interceptions per minute of opponent possession. They restricted the opposition to an average of only 3.49 passes per possession.

They don’t hold their 4-3-3 formation when defending. With the opponents in possession of the ball in an advanced area, they fall back deeper into a 4-1-4-1 formation. This allows Baumgartlinger to shield the back four, whilst the midfield four press the ball with intensity.

If the opposition plays centrally, Bosz likes his teams to get exceptionally narrow. The manager wants to force them to have to take on their fast full-backs if they want to get around them. Last season Bayer full-backs Mitchell Weiser and Wendell won 67.1% and 62.5% of their defensive duels, respectively.

Staying narrow defensively may force the opposition to play a long ball or attempt a cross. Dominant Bayer centre-back Jonathan Tash is 1.95m tall and won 66.1% of his aerial duels last season. Bosz is more than happy for them to try and beat Tah aerially.

We can see how narrow they get, below. Baumgartlinger drops between midfield and defence and presses the ball. The back four remain together and narrow. Yet the remaining midfield four sit higher waiting to receive the ball and launch a counter-attack.

Brandt will be a huge loss to the side this coming season. But there is no reason to suggest Bayer Leverkusen won’t be a top-four team once again this year.

They have been smart with their summer business, but Havertz will need to have another impressive season to make up for the loss of Bayer’s former number ten.

Demirbay will be an important player as well this year. He will make up for some of the lost creativity from Brandt’s sale, whilst adding more steel to the midfield. Moussa Diaby will challenge Bailey and Bellarabi for a starting role.  It would not be surprising to see him contribute heavily to Bayer this season.

If Bayer can repeat the form they showed under Bosz in the second half of the season they will be a threat against any team. How the new signings gel quickly and contribute from the start will play a major part in this.