Having finished the last Bundesliga season in tenth place, Fortuna Düsseldorf once again want to have a solid season and establish their place in the league’s middle tier. Headcoach Friedhelm Funkel, one of the most experienced coaches in Germany, faces a difficult task though, as the team’s shape changes. Especially the loss of Benito Raman and Dodi Lukebakio is not easy to compensate, bearing in mind that costly signings do not fit Düsseldorf’s budget. Therefore, the management decided to loan some players like Lewis Baker from Chelsea, Erik Thommy from Stuttgart and Bernard Tekpetey from Schalke. The only player costing them a transfer fee, Nana Ampomah from Beveren, was signed for an amount of four million Euros.

Given these circumstances, a functioning team with high tactical quality will be crucial in order to stay in the league. This tactical preview will be a tactical analysis of Düsseldorf’s pre-season games. We will examine the strengths and weaknesses of Düsseldorf and provide a scout report for the upcoming season based on their tactics.

Friedhelm Funkel prefers a 4-2-3-1/4-1-4-1 formation, which he will probably not change throughout the season. Even though this is not fancy at all, it is a solid formation, which ensures that Düsseldorf stay compact. Very much like last season, Funkel prefers quick wingers who can break through thanks to their acceleration and speed. It is also an option to play Kenan Karaman up-front instead of Rouwen Hennings, as Nana Ampomah could then find his place in the starting XI. A system with two strikers, basically with both Karaman and Hennings up-front, is not very likely, as the midfield would open up too much in such a formation. 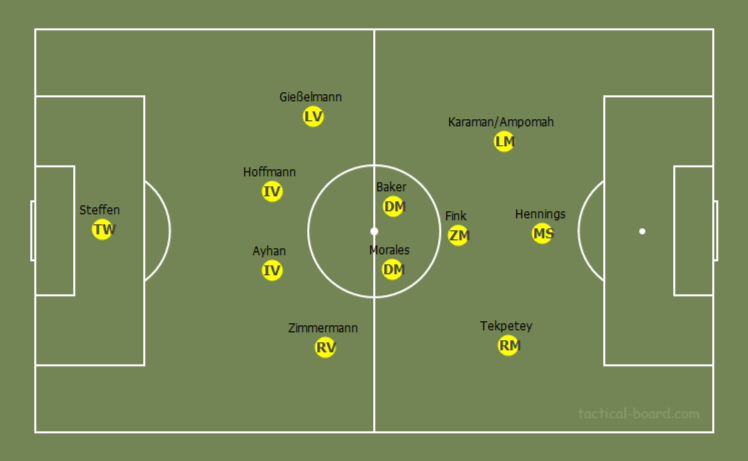 Defensive stability will be the key for Düsseldorf

Düsseldorf are a compact team, emphasizing defensive stability. Rarely, the team presses high. Instead, they focus on closing the centre and controlling the space. 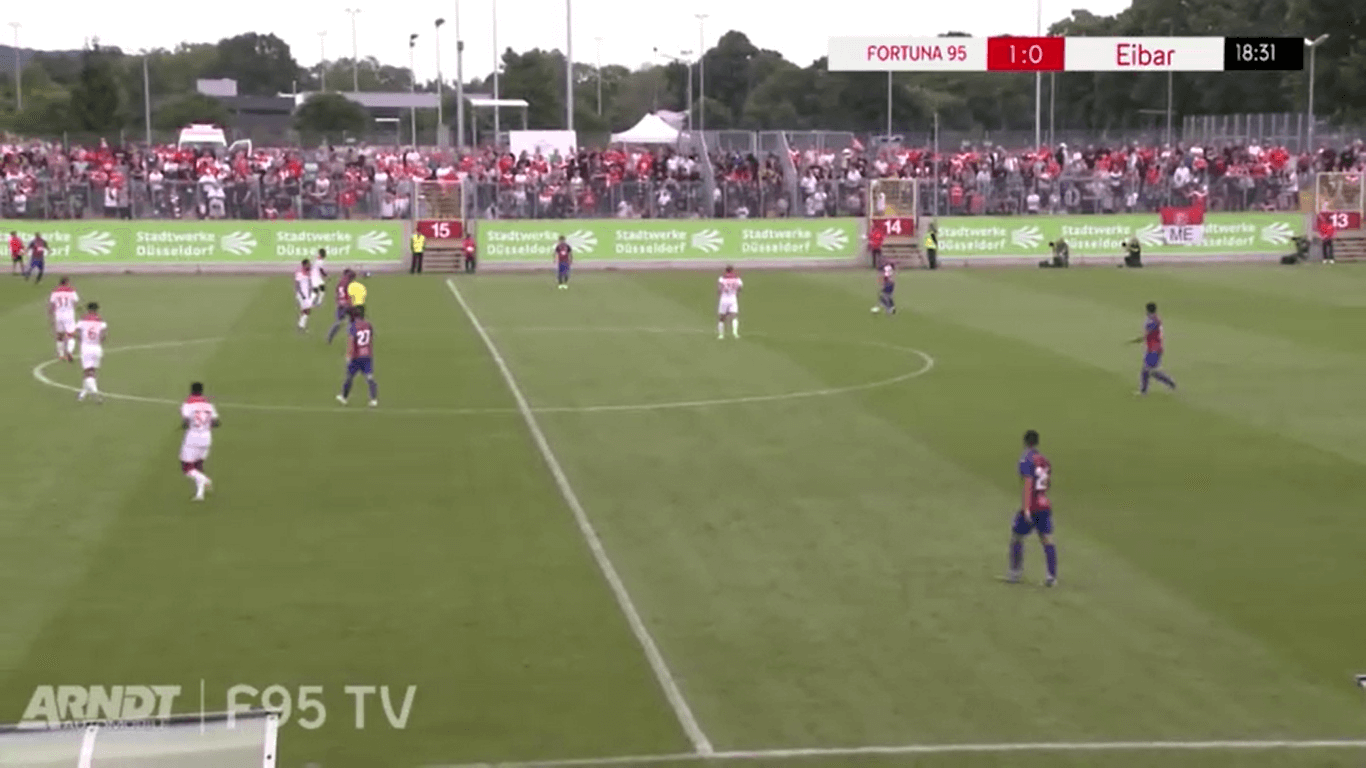 Here, we have an example from a pre-season test against Eibar. While Düsseldorf’s sole striker does not put any pressure on the ball, five midfielders are behind the halfway line. The formation used here is a 4-1-4-1, with close gaps within the lines, but also between them. For the opponent, it is difficult to break through centrally. 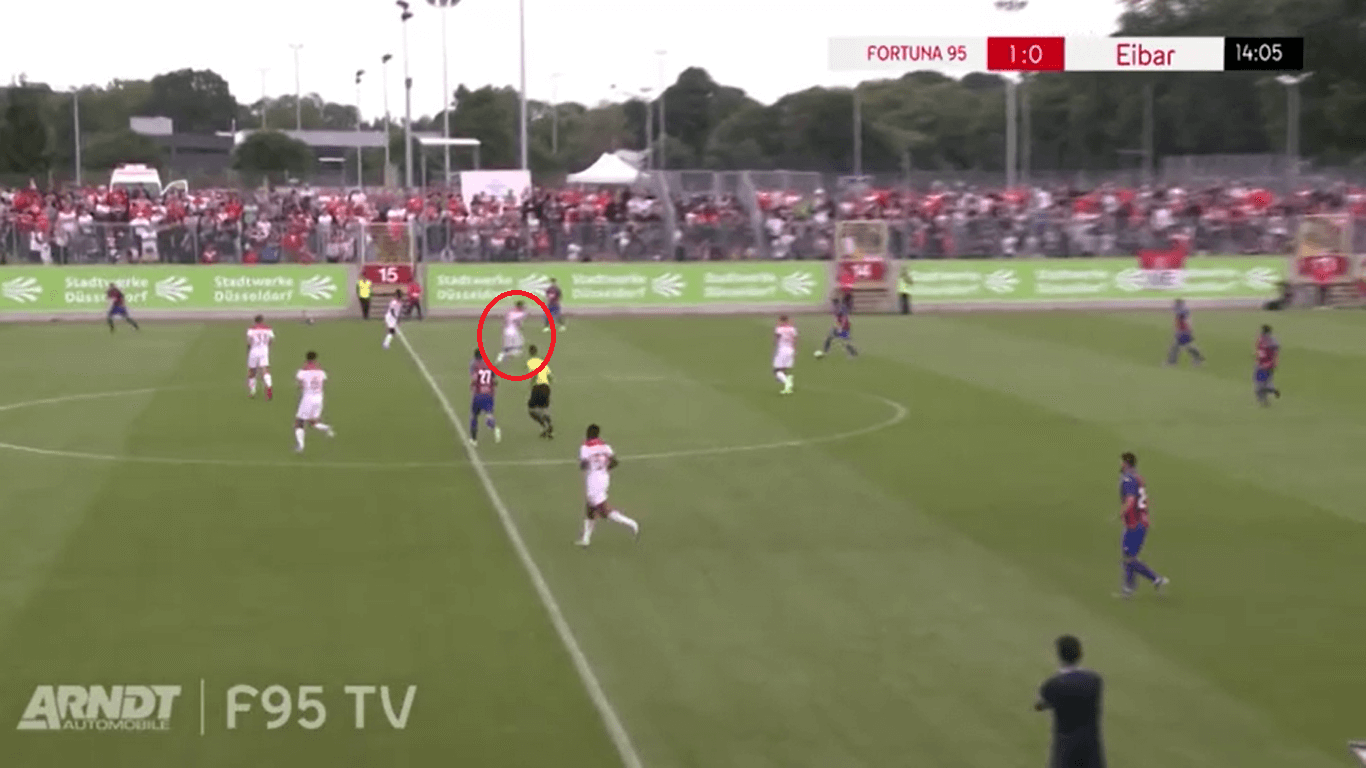 If needed, one midfielder pushes forward to put pressure on the ball. Then, the formation shifts into a 4-2-3-1/4-4-2 hybrid. The two defensive midfielders stay a bit deeper than the rest of the midfield to provide cover. As the opponent has three players centrally in their first build-up line, but only one player in the midfield position near the halfway line, it makes sense to move forward and pressure there. However, the striker is a bit passive, which reduces the effectiveness of his teammates’ movement.

In the DFB Pokal (German Cup) against Villingen, Düsseldorf tried to press somewhat higher, as the opponent plays in a lower division. Occasionally, we could see this as well in Bundesliga, when Düsseldorf need to build pressure on the opponent. 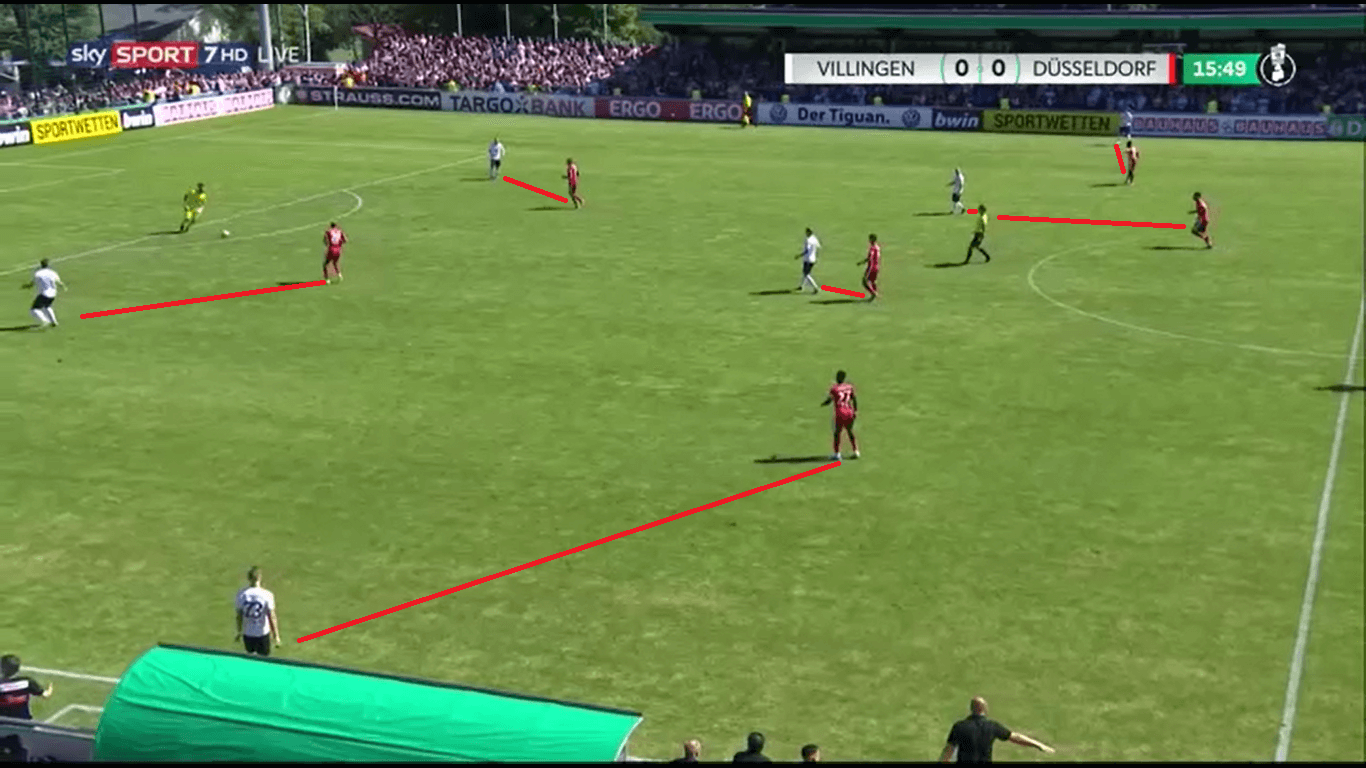 As can be seen in the image, Düsseldorf use a man-oriented press, where every player acts strictly man-to-man. This simplifies things and makes it easier to implement the high press. For teams like Düsseldorf, who don’t use a press that often, this is a simple way to execute a press. The players only need high energy, but it is not important to be perfectly coordinated like in other pressing variations.

However, even in this simple version, it is crucial that everybody participates. Since the goalkeeper has no passing option, a long ball should be awaited, so the second crucial point for the defence is to be ready to defend the long ball and eventually second balls.

When Düsseldorf win the ball, their main idea is to counterattack quickly. 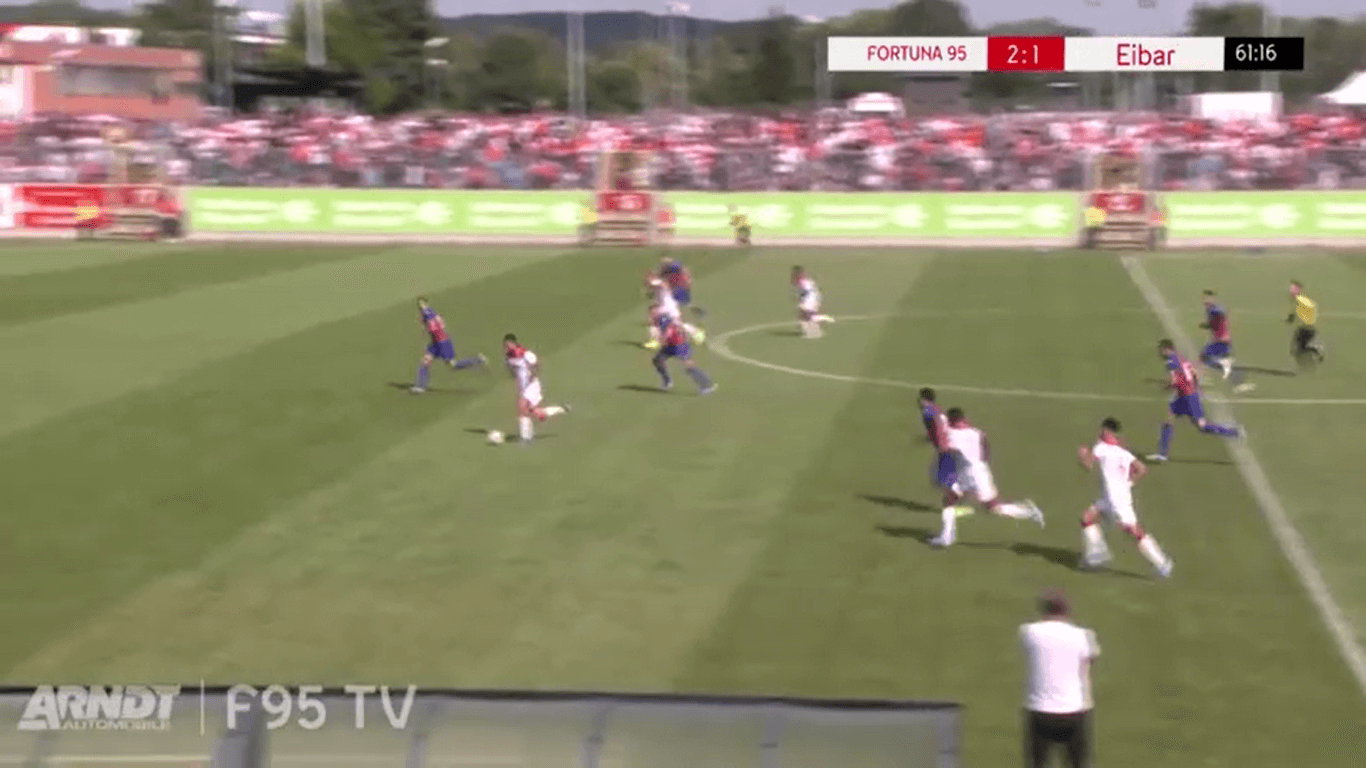 Like in this example, often enough Düsseldorf manage to counterattack with at least a numerical equality, in this case, a 3vs3. Two additional players participate in the attack via the left-wing. Düsseldorf often try not to get too wide while counterattacking. So even the wingers are positioned more centrally so the attack can be executed quicker since the distance to the target is not that far.

Therefore, the two players coming from behind are irrelevant at first, because it would slow down the attack to wait for them and then play out to the wing. Düsseldorf rather try to chip the ball into the open space behind the deepest defender and then land a shot on target.

Playing out from the back is not a strength for Düsseldorf

If Düsseldorf are not able to play fast, but rather have to build-up from the back, they tend to get into trouble. Beside technical weaknesses, their positioning is not always on spot. 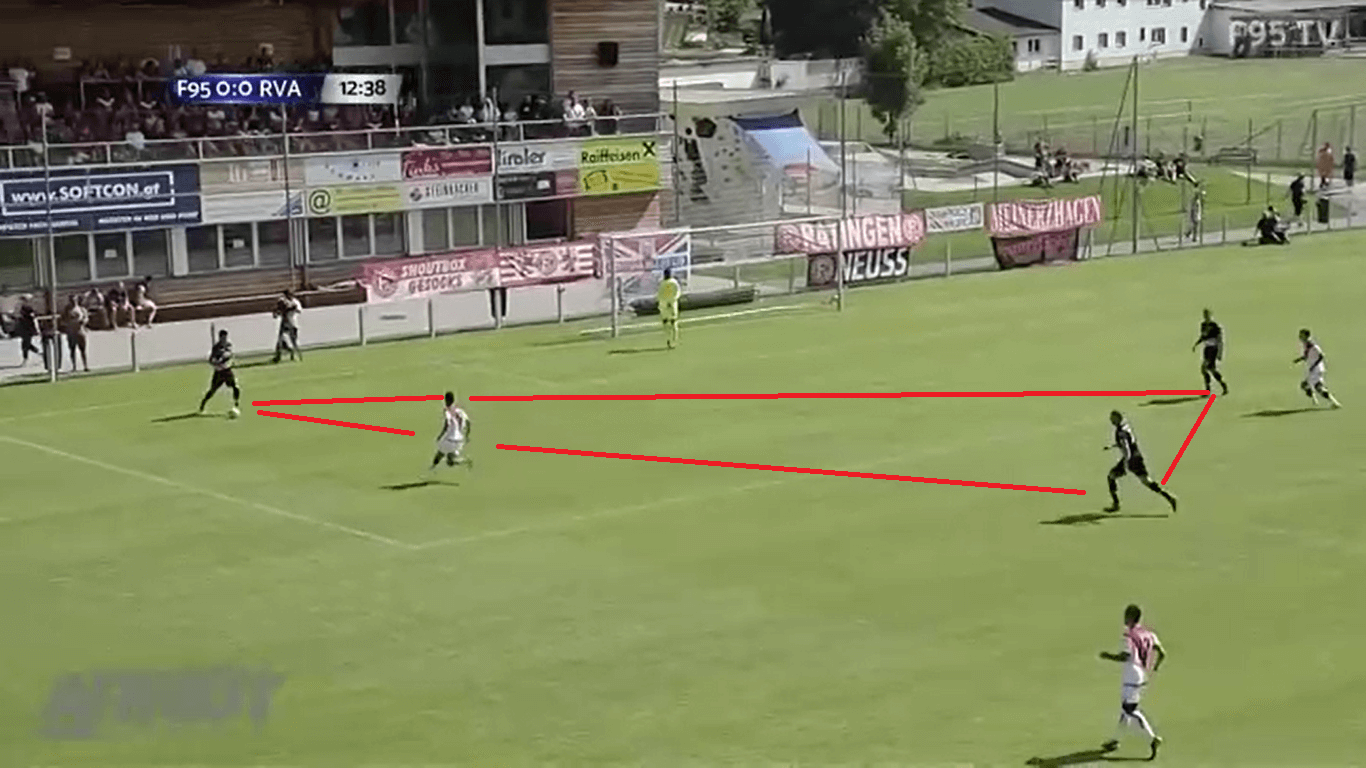 Here is an example where a goal kick is played short. Even though some kind of a triangle is built to give the player enough passing options, it is rather difficult to play out clean. The left centre-back needs to move out much more to the left side and pull away his opponent to create space. Defensive midfielder Oliver Fink seems to be ready to receive the ball, but the poor camera positioning somehow misleads. There is a situation some ten minutes later, which is very much alike and ends with a turnover from Fink. 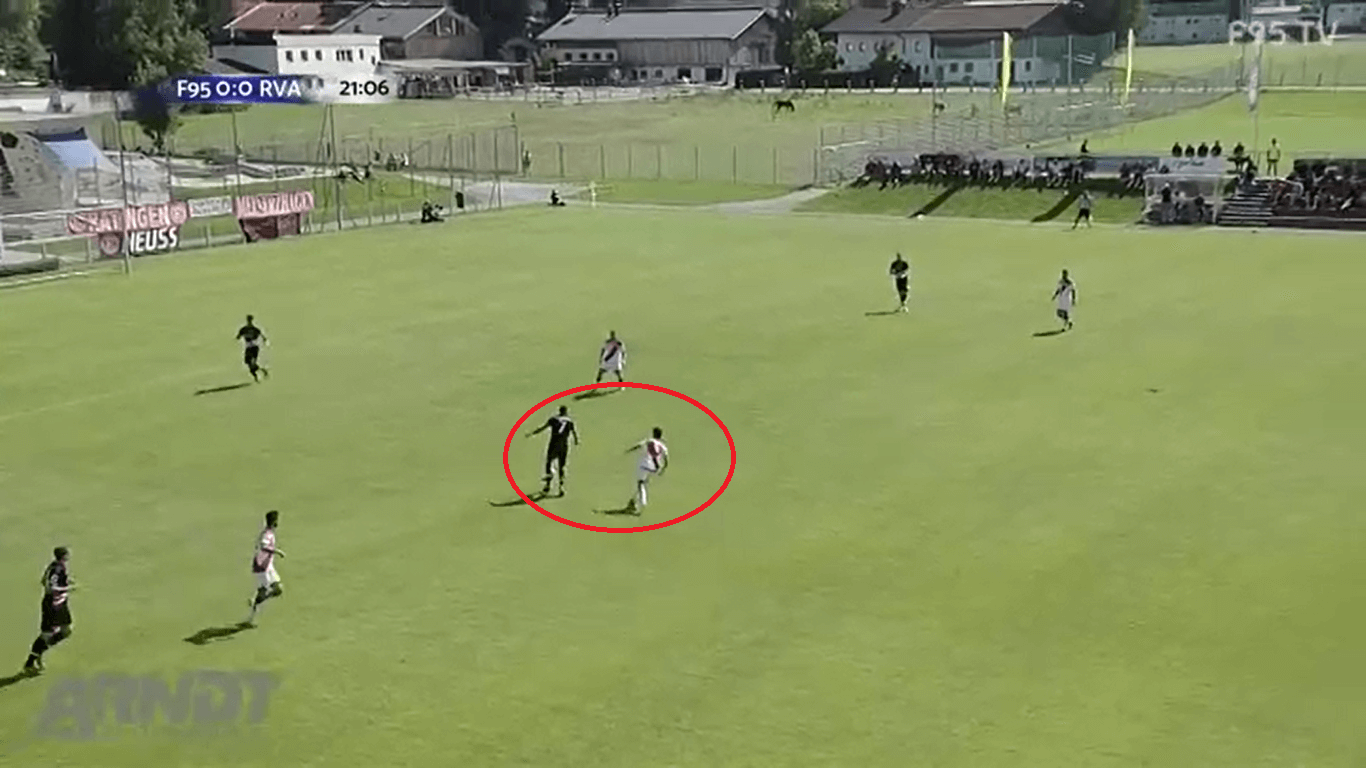 Fink receives the ball in the centre, but as he gets a vertical pass by the centre-back, his face is towards his own marker. Therefore, he has to turn to play on. Meanwhile, the opponent can immediately press him and he turns the ball over. In such situations, the only valid solution is to play the ball back to where it came from. 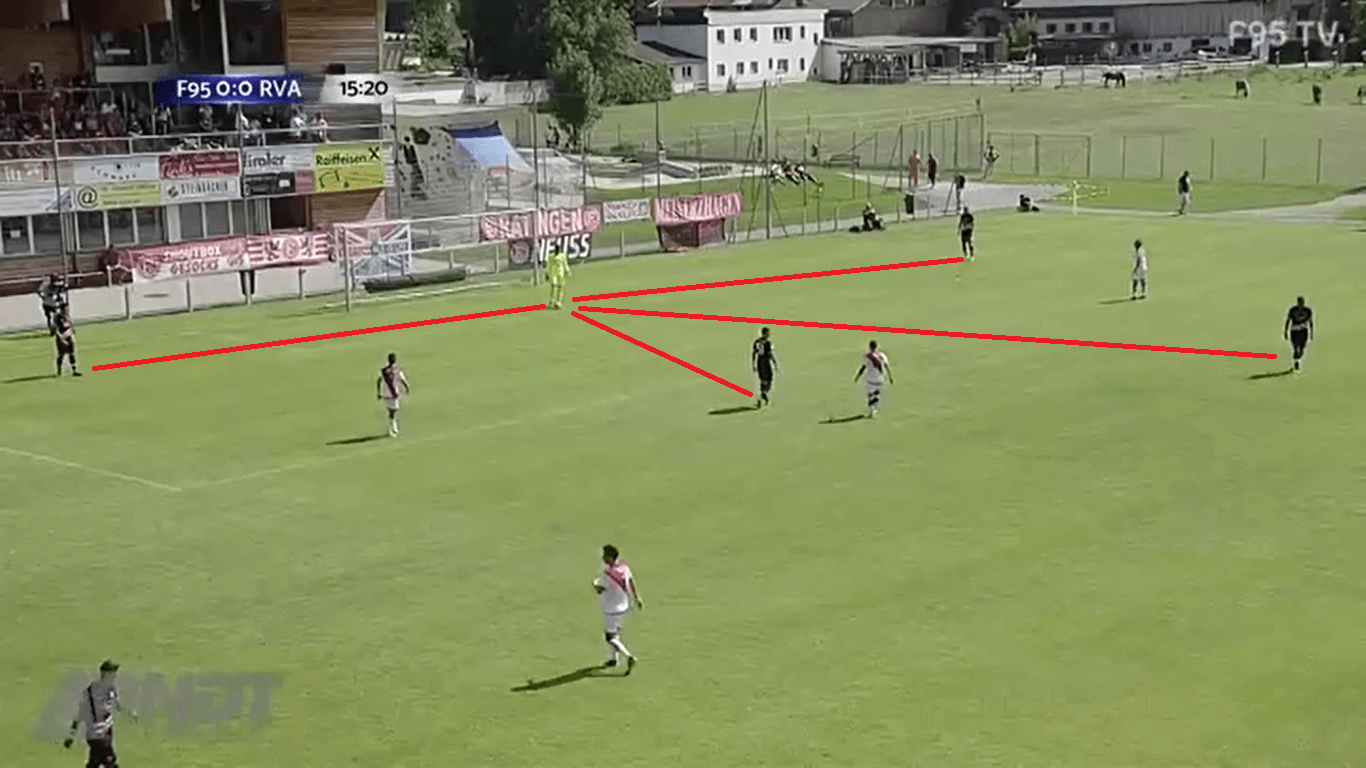 This goal kick also underlines these problems. Even though the goalkeeper has four immediate passing options, none of them really ensures that Düsseldorf is able to stay in possession without getting under pressure. The two defensive midfielders would need to turn if they got the ball, while the centre-backs do not have a passing option. 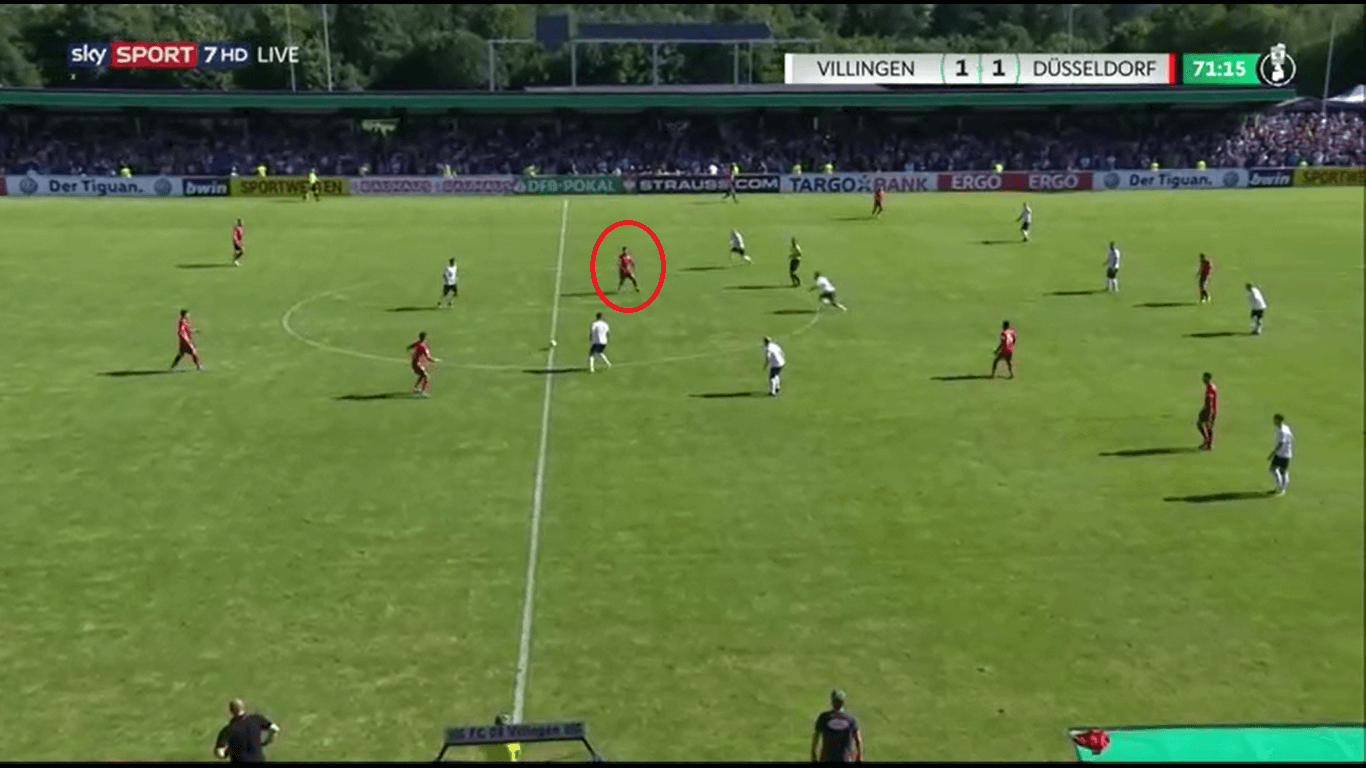 Although occurring at a different part of the pitch, this example shows a similar problem. The passing lane to the defensive midfielder is open, so the pass is played. But five opponent players are ready to press the man receiving the ball, who has no real passing option. The second and third step is always compromised when Düsseldorf are in possession. 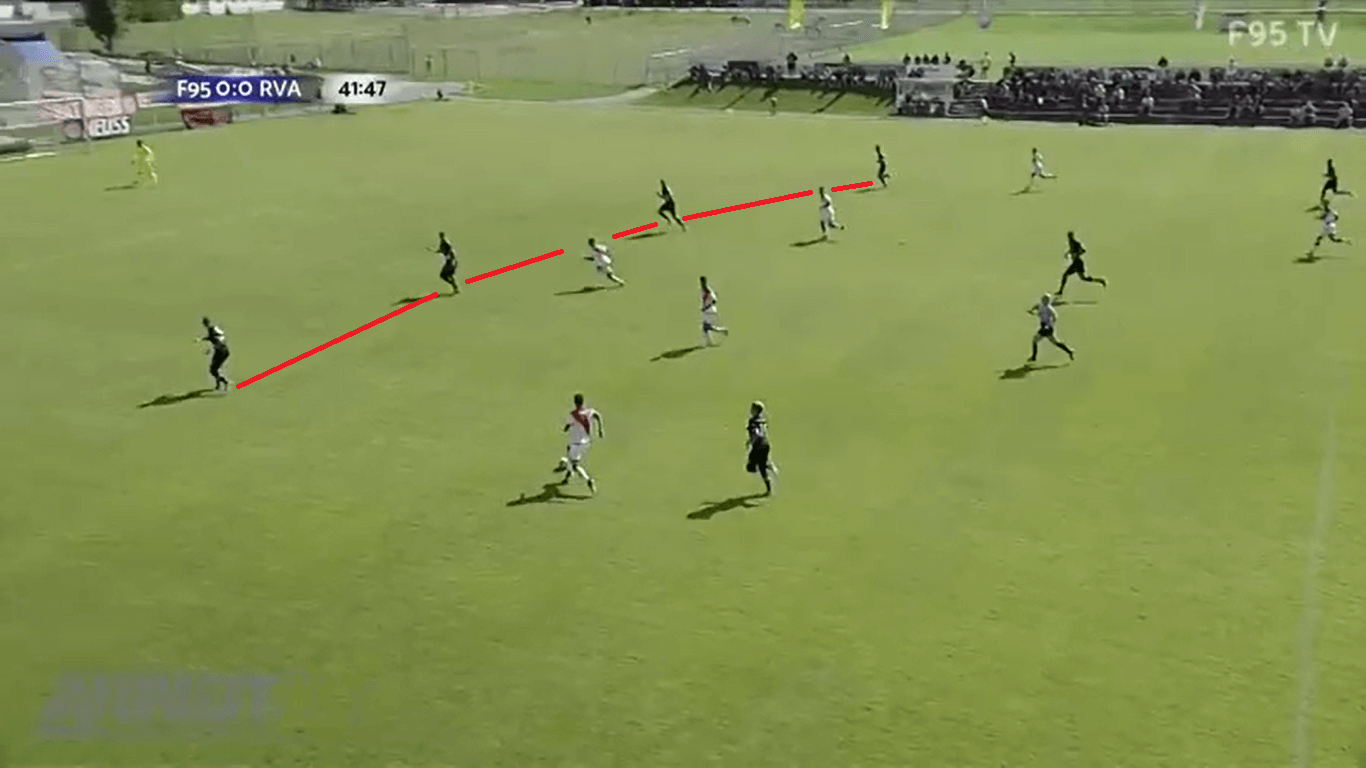 Additionally, such turnovers can be very costly. The image above shows an example, where Düsseldorf run into a counterattack themselves. As good as Düsseldorf are in offensive transition, they tend to show weaknesses in defensive transition, because of the midfield not being able to come back in time. Thus, the back four have to defend the situation on their own. The only possible solution for them is to try to slow down the attack.

Attacking through the wing

In the final third, Düsseldorf use their wingers to attack. While we saw that the wingers are more centrally in counterattacking situations, the stay very wide in slow possession. When they receive the ball, they are encouraged to dribble. 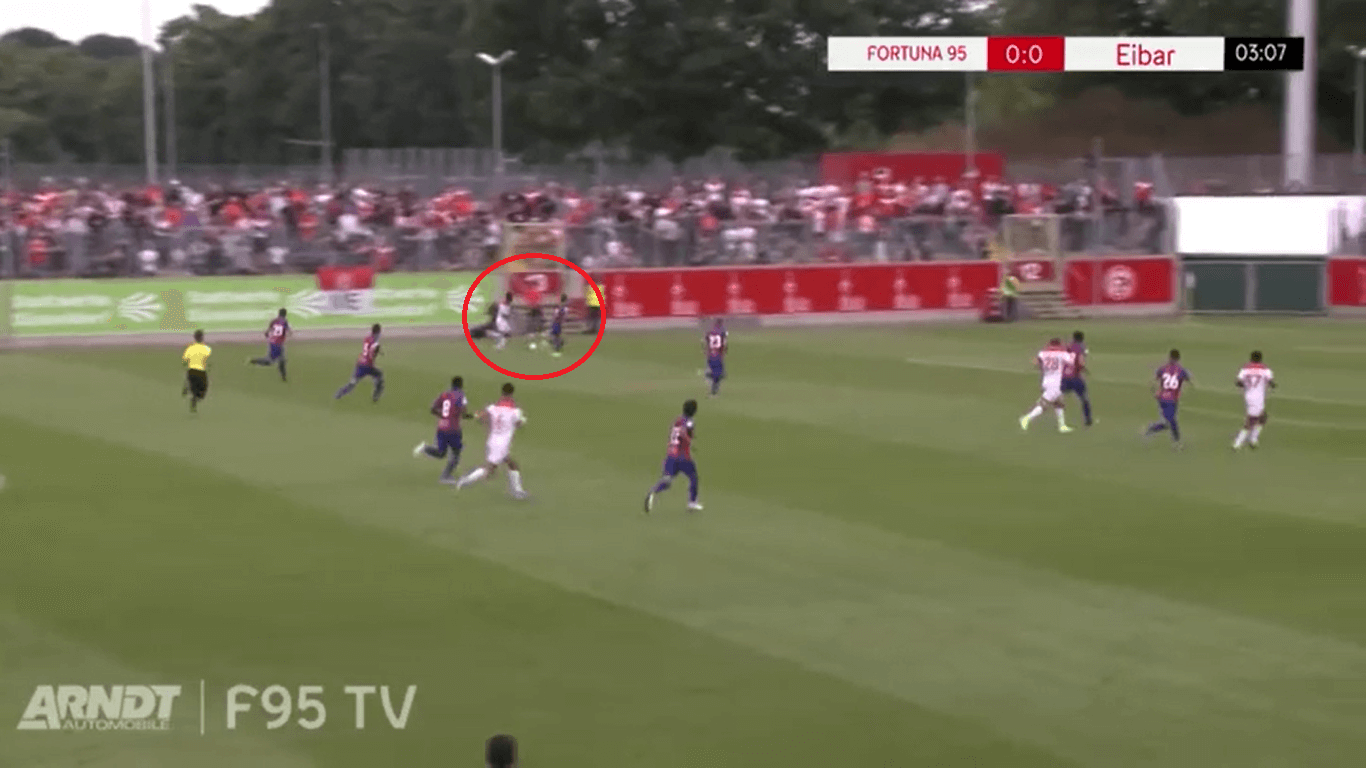 Very much like in the image above, Düsseldorf’s wingers should look for a one-on-one situation against the opponent’s full-backs. Notice how the other players occupy the centre, which frees the wing for such one-on-one opportunities. 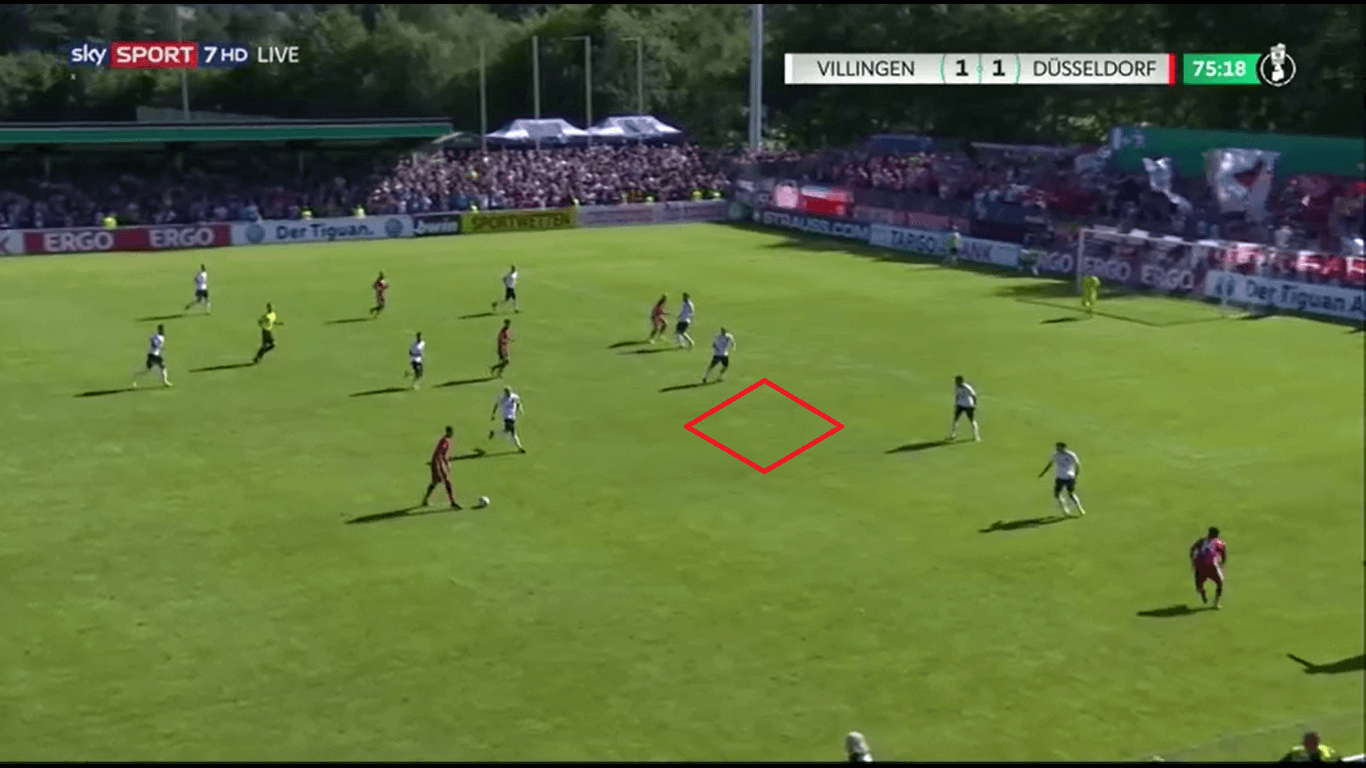 This may also pose problems when the half-space is not occupied. Four red players are in front of the ball, but for three of those four, it is impossible to receive the ball here. The only valid option is to try to get the ball out to the right-wing. This is of course far from optimal from a possession football point-of-view. However, Düsseldorf use this as it can be effective with strong wingers. Imagine that the right-winger breaks through. Then the three central players would provide a lot of danger in the box.

Our analysis showed that Düsseldorf are a compact team who rely on their counterattacking qualities as well as on their quick wingers. Very much like in the past season, a lot will depend on how well their wingers will play. As they lost Raman and Lukebakio, things may look a bit more difficult if the new signings cannot replace them. However, the main approach won’t change. We cannot expect Düsseldorf to have a great possession game, but they will be a dangerous opponent for many teams in the Bundesliga.