A natural extension to the first all-English European finals, the first all-English UEFA Super Cup 2018/19 between Liverpool and Chelsea turned out to be an enthralling match; providing plenty of tactical talking points. Liverpool are known in Europe for a certain style of football (although they did change quite a lot of moving pieces in this match) which is engaging to watch with a lot of dynamism. Chelsea, on the other hand, are finding their own identity under new manager Frank Lampard.

The match ended 1-1 in normal time and then 2-2 in extra-time. The game then went to penalties where Liverpool edged out Chelsea by the finest of margins. In this tactical analysis, we’ll discuss all the key points from the match which might also give us an insight into what to expect from both teams in the upcoming season. 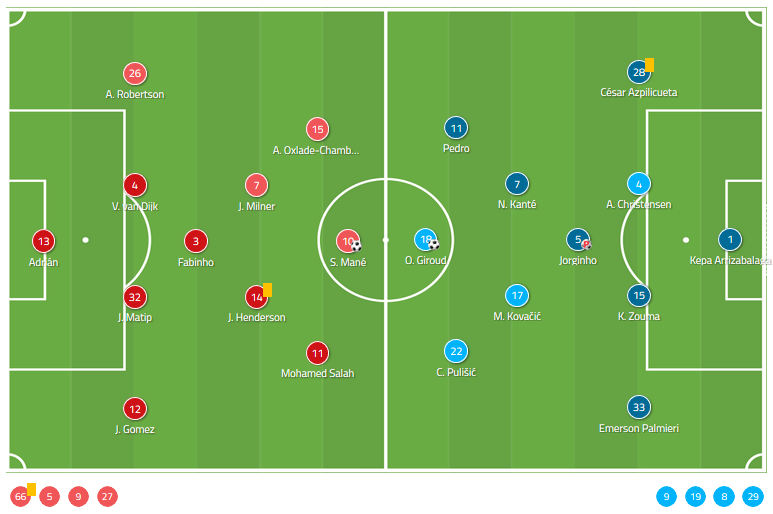 Both teams lined up in 4-3-3s but they both employed different tactics for different phases. They also made a few in-game changes.

Liverpool were missing Trent-Alexander Arnold and that ended up having a lot of impact on their overall game-plan. In his place came in Joe Gomez.

In the initial few minutes, Liverpool didn’t push up both of their full-backs – instead, Gomez sat deeper. To counter this, Mohammed Salah pushed out wide on the right side and Henderson provided a presence in the right half-space for combination play. This can be seen in the image below. 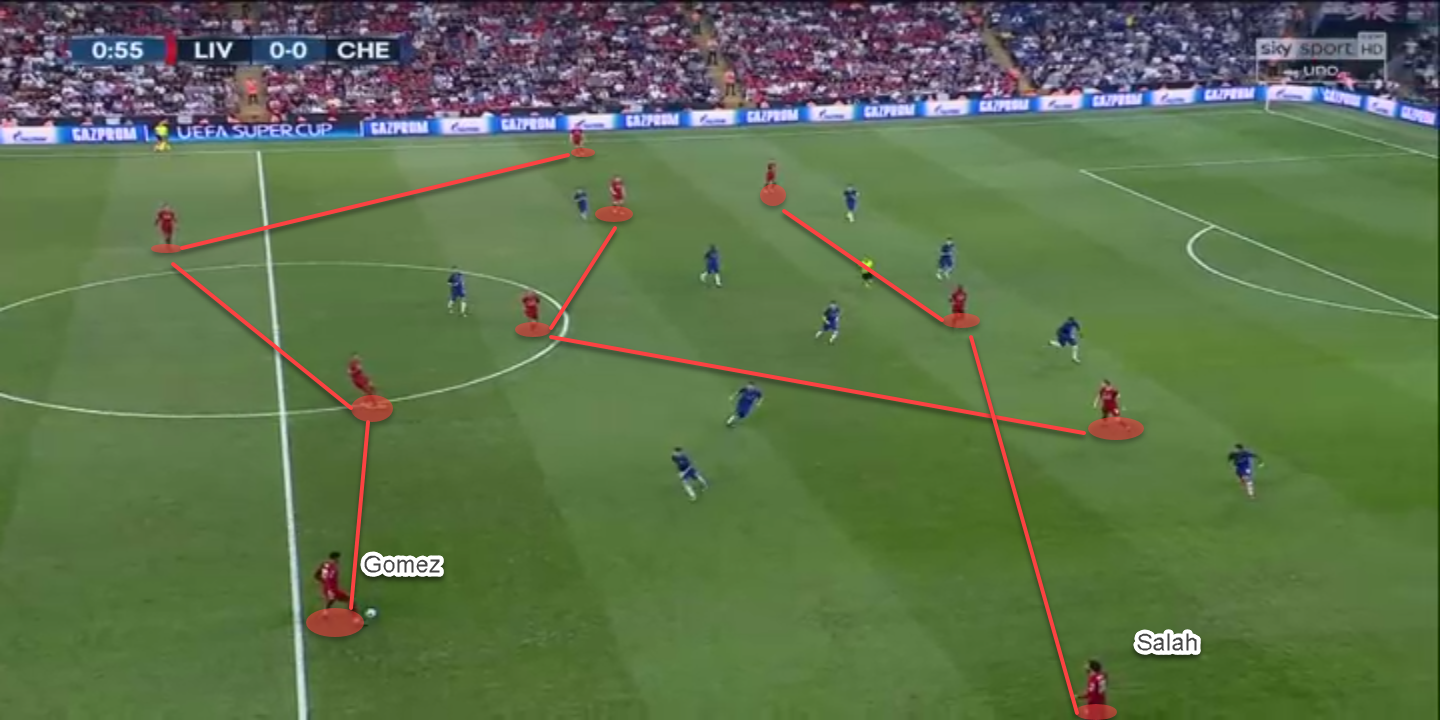 On the other side, Andrew Robertson couldn’t push up with regularity due to Pedro’s positioning – the latter was trying to exploit those wide spaces during transitions and Liverpool needed some cover in that region.

To make up for the full-backs lack of participation in the offence (especially on the right flank), Klopp tried to use his midfielders instead to push up ahead and provide support to his front-three.

However, as the game grew older, Liverpool returned back to their usual shape. Henderson often dropped deep so that Gomez could move higher up the pitch. Milner provided support up top but he worked closely with Robertson so that they could keep an eye on Pedro’s runs. When Milner moved up higher, Robertson hung back and when the full-back was positioned higher up the pitch and unable to track back in time, Milner slotted into the left-back position. An example of this dynamic between the full-back and their midfielder is shown below. Henderson drops from his usual higher position to receive and this allows Gomez to move higher and Salah, in turn, occupies Emerson. 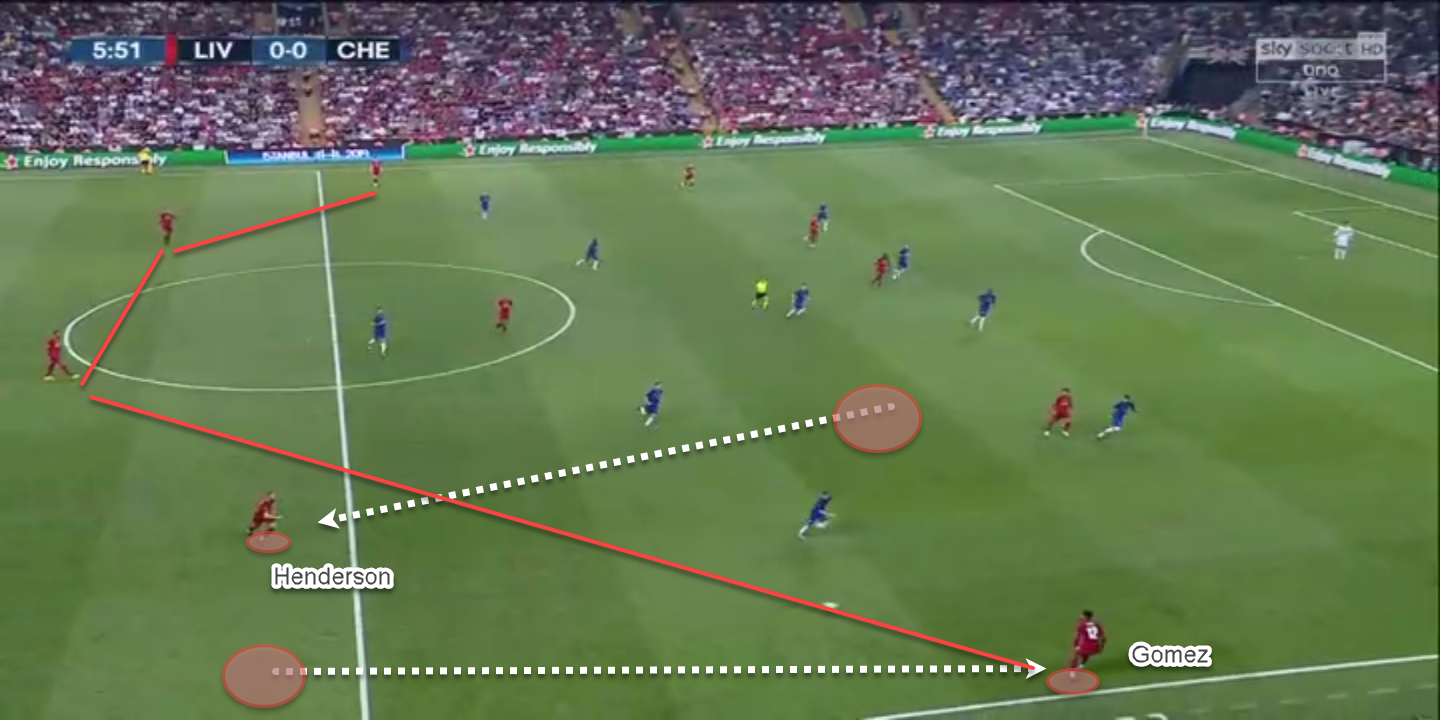 As is probably evident, the midfield trio of Liverpool were very fluid in possession – fulfilling a host of roles. This was not necessarily a good thing. Henderson and Milner, in particular, provide a lot of dynamism and can sniff and exploit spaces in the opposition’s defensive structure very well – however, they don’t offer on-ball solutions. What this means is that they’re not suited to a slower-tempo possession style and don’t offer progressive passes or carries with the ball. This is also why the term – “work-horse midfield” is often associated with Liverpool.

Liverpool’s initial asymmetric tactics in possession led to different build-up patterns on either flank. Or rather, the patterns remained the same but the personnel changed. On the left flank, Robertson provided width and height much more regularly than on the right flank. To make up for that, Oxlade-Chamberlain moved inwards and Milner provided support at the base of the triangle.

On the other flank, it was mostly the full-back – Gomez, providing defensive cover while Salah and Henderson looked to combine and isolate the Chelsea full-back (Emerson).

During Liverpool goal-kicks, Chelsea hardly pressed up high. Liverpool were allowed to progress the ball up-field for a certain distance. Fabinho acted as the lone pivot although he was not necessarily important for ball-progression. His non-participation in the first phase of build-up may have been partly due to Chelsea’s pressing and how they ensured that the central options were covered using their direction of pressure. Hence, the only spaces afforded were in the wide areas.

Liverpool were trying to either create overloads on the flanks or at least isolate Salah against Emerson. They did this via a few different ways – either overloading the other flank – the left flank – and then quickly switching to the under-loaded side or finding Salah down the flank via a pass from Gomez. When that happened, Henderson would be lurking in-between lines and would provide an option for a wall-pass or exploit the gap between Kurt Zouma and Emerson as Emerson moved out to press Salah. An example of that can be seen below.

From there, Henderson crossed the ball into the box for Mane. Liverpool indeed depended on a cross-heavy policy in the final-third to create part of their chances. The other part was due to counter-pressing – which we’ll discuss next.

Liverpool dominated possession but Klopp has built a very disciplined side off-the-ball and that was evident in this match as well.

During Chelsea goal-kicks, Liverpool pressed high up the pitch in their normal 4-3-3 structure. This is illustrated below. Mane led the line and stayed centrally waiting for Kepa to pass to either of the centre-backs. Salah and Chamberlain stay in optimal positions to press the centre-backs or press their respective full-backs if a lofted pass is played over the top.

The midfield trio is man-marking Kante and Kovacic but they leave Jorginho apparently free. However, this is one of their central pressing traps and Chelsea were aware of this and hence, never played short passes centrally during goal-kicks. Indeed, they didn’t play short passes at all and went long to Giroud all the time.

In the second-half, Chelsea enjoyed a lot more possession (and were almost pinning Liverpool back). During phases of rest-defence, Liverpool sat in a mid-block 4-3-3. They still pressed, usually following any back-passes to ensure that the player receiving the ball didn’t have time to find a pass.

In the first half, Chelsea played mostly during the transitions. They waited for Liverpool to commit more men forward before looking to exploit the spaces left behind and counter at speed. This took place in two different places in slightly different ways – out on the flanks and in the central areas.

Out on the flanks, when the full-backs were committed higher up the pitch, Chelsea’s wingers took advantage of the wide corridors to carry the ball. Jorginho played through-balls for the wingers or they’d combine with the nearest midfielders to play wall passes. An example can be seen below. Although in this case, Matip was alert enough and agile enough to chase and pressure Giroud to ensure the shot went off-target, Chelsea tried this multiple times in the match.

In the central corridor and the half-spaces, the spaces were found when the midfielders moved ahead to either press or to support the offence. We’ve seen in the previous section how Milner and Henderson played in the half-spaces (the latter especially more so). When this happened, Fabinho was left isolated. If done correctly, Kante and Kovacic were able to overload him and hence create 1v1s with the Liverpool centre-backs or release their attackers behind them. This was how Kante was regularly able to get into the half-spaces and either dribble the opposition players himself or retain possession until he could lay it off to another midfielder.

However, for the majority of the first half, they couldn’t retain possession. This was due to multiple reasons – the most significant are two, the intensity of Liverpool’s press in the middle third, and their own tendency to sit in a mid-block instead of pressing Liverpool actively within their (Liverpool’s) own half.

Liverpool’s press was great but by no means perfect and Chelsea had more than their own share of opportunities to take advantage of certain structural issues of Liverpool. However, the players’ limited spatial awareness (or maybe the focus was on being defensively compact first) meant that they were unable to do so. For example, in the illustration below, notice the amount of space with Emerson and Azpilicueta. Liverpool’s midfield is very narrow and is drawn in by Kovacic. Hence, if the Chelsea full-backs are able to position themselves higher up, they’d be in enough space to bring the ball down and knock it down the channel to their wingers. However, for some reason, they didn’t do so and Kepa goes long to Giroud.

The full-backs’ positioning was a major issue throughout the match for Chelsea. Often times, they were too deep in their own half. Whenever Kepa tried to find them, they’d be easily pressed by the Liverpool forwards.

Chelsea defended in a 4-1-4-1 or a 4-5-1 during the entire game. This is clear from the picture below. Both of them are relatively easy to get into from their 4-3-3 and hence, is the most common defensive block for any team playing an offensive 4-3-3. They positioned themselves in a mid-block and only pressed when Liverpool tried to cross the half-way line.

Under Lampard, Chelsea have retained most of their defensive principles from last season. However, the defence is far from perfect. Newer issues have plagued them judging by the pre-season friendlies. The most important issue is the compactness of the Chelsea block under different phases of play. In the match against Manchester United, they pressed higher up the pitch (as can be found in this analysis). The forwards and midfielders move up top to press. However, the defensive line is found lagging behind and this leads to a lot of space in-between lines. These spaces were exactly what players like Firmino was excellent at finding and exploiting as can be seen from this picture below.

The other issue Chelsea have faced recently is finding the balance between pressing and retaining compactness. In this match, this issue seems to have been addressed as the players were aware of their defensive responsibilities in respect to one another. For example, when Kante joined the press, Jorginho stayed back to zonally cover the space ahead of the back-four and vice-versa.

This can be seen in the picture below. Kante has moved up to press along with the forwards and notice how Jorginho is mindful of keeping a staggered structure so as to ensure that they can’t all be bypassed in a single pass and gestures to Kante to do the same. 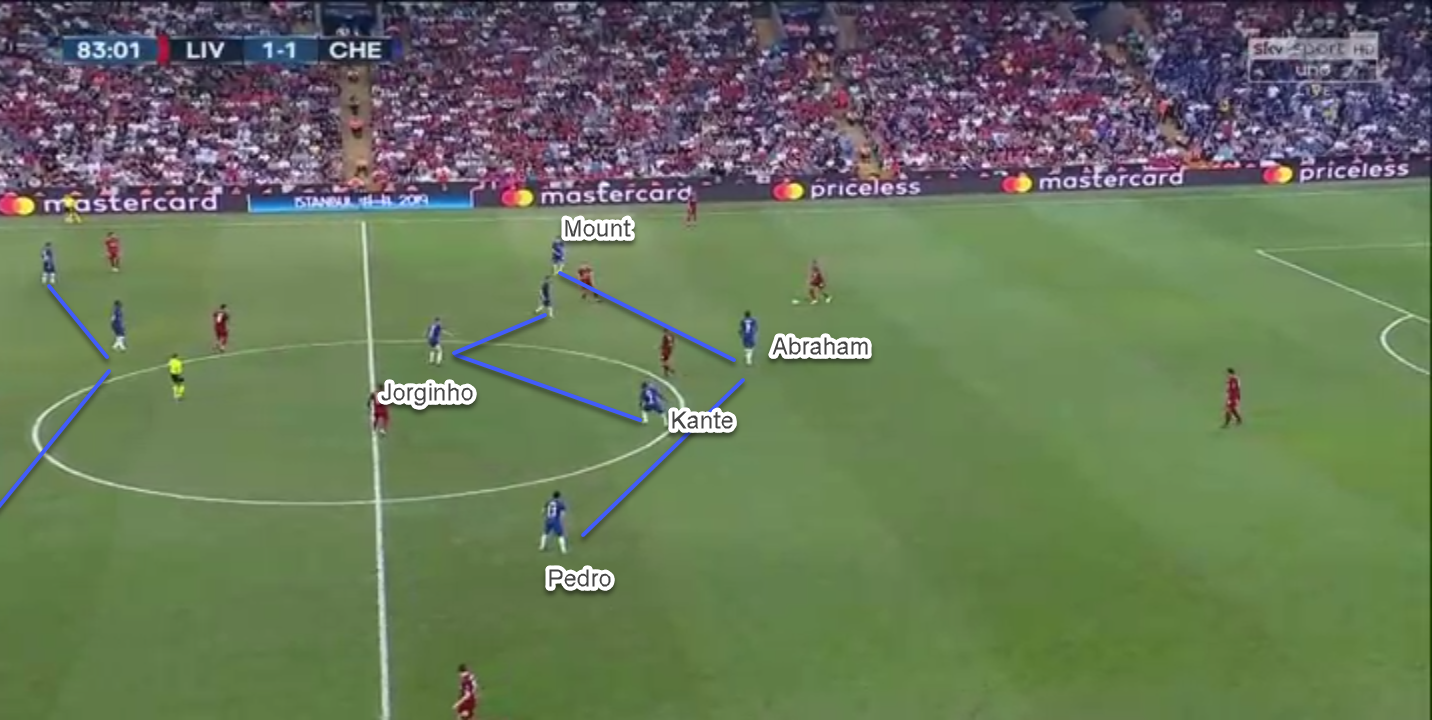 The match proved to be as interesting as anyone would expect with lots of ups and downs throughout the full 120 minutes. The drama would’ve been incomplete without a penalty shoot-out so naturally, that was there as well. The most interesting aspect of the match was how both sides felt like they’d outplayed the other. Indeed, both managers had executed their game-plan almost perfectly. Chelsea still have a lot to work on, especially structurally. For Liverpool as well, Klopp may want to add more versatility to the midfield. However, Liverpool was the better team at the end, and they’ll add another trophy to an already successful campaign even as the next season gets underway.