Eintracht Frankfurt have been somewhat raided this transfer window, with two of their formidable front three of Jović, Haller, and Ante Rebić reduced to only Rebić now being at the club. Rebić is well known throughout Europe, in no small part thanks to his fantastic performances at the World Cup last Summer. So why has Rebić not been snapped up by anyone else this transfer window, despite numerous links away from the club? While Rebić is no doubt a quality player, there is one burning inconsistency in his game that lets him down regularly and is the reason, I would suspect, that top clubs have not also taken Rebić from Frankfurt just yet, although there is still time. In this tactical analysis, I’ll look at his strengths, how he fits into Frankfurt’s tactics and also address that weakness in his game which, if he was able to improve, would take him to the next level.

Rebić’s biggest strength comes in his dribbling and 1v1 ability. His 1v1 ability is benefited by his excellent physical attributes, in that he is quick and strong and can use his body to protect the ball and advance past opponents with it. As a result of these attributes, Rebić works best when given space to drive into and beat opponents in. We can see a few examples of this below.
After he drives into space down the line, Rebić has a one-on-one with the Hoffenheim defender. Rebić slows down and keeps the ball close to him, but not too close that the defender doesn’t commit. Therefore, when the defender goes to commit, as we can see below with the defender making an inwards movement, Rebić uses a quick turn of pace and knocks the ball away from his opponent into the space highlighted. This change of pace is something he uses regularly, as it slows the defender down and allows Rebić to use his excellent acceleration to get past the defender.

Once past, Rebić is excellent at using his strong upper body to protect the ball and make it difficult for the defender to make a challenge without making contact with him. We can see this below, with Rebić getting past the opponent and blocking the path between the defender and the goal. On occasions where there aren’t many options in the box, Rebić may choose to slow down in front of the defender, forcing the defender to collide with him and win a foul. On this occasion, he spots options in the box and delivers a cross.

Aggression off the ball and role in the press

Last season, Rebić’s role in Frankfurt involved him playing mostly as a ten, supporting Haller and Jović from behind. Therefore, his role in the press revolved mostly around either pressing as part of a front three or pressing the oppositions pivot.

A perfect example of Rebić’s aggression off the ball as part of the press is seen below, with that front three forming a triangle, with the two strikers pressing the centre-backs and Rebić pressing the midfield player dropping between in a pressing trap. Rebić allows the player to receive the ball with his back to Frankfurt, and as soon as the ball is played he aggressively presses the player and uses his strength to recover the ball.

Frankfurt are then in a very dangerous area to transition from, and Rebić uses his acceleration and protects the ball well as we have seen previously in the analysis, despite being defended from both sides, to get a shot off at goal and score.

We can see this again below, with an example from last season. Here again, we can see the two strikers pressing a centre-back each, but with Hoffenheim employing a back three, Rebić has to be flexible in pressing either the dropping central midfielder, or the centre-back, or quite often both using his cover shadow.

We can see this in the example below, where Rebić drops into a space between the lines to receive the ball. However, he doesn’t receive the ball and then makes a decision of what to do on the ball, instead. With one-touch Rebić looks to play the ball into a greater space for one his teammates to advance up the pitch.

We can see this again below, with Rebić occupying the space between the lines and looking to receive the ball. Here, it is his body shape on show, with Rebić ready to receive the ball and opens his body up in order to turn quickly, with two players either side of him looking to close the gap the pass was played through. He can then use his 1v1 dribbling abilities to look to beat opponents or look to pass the ball, which brings us onto his biggest weakness.

Although he is excellent at finding spaces to work in, his technical ability in terms of passing lets him down too often. At times, Rebić plays away from his own strengths, and other times it is a simply poor technical play which can lead to his passes being unsuccessful.

We can see this below, where he again finds space between the lines to link the play. Upon finding the space and receiving the ball, there is some pressure from behind him and this often affects his decision making, as here where he opts to flick the ball into the central area, unaware of the Shaktar player highlighted. The pressure from behind seems to rush and hinder his decision making at times, when really it shouldn’t, as Rebić is strong enough to hold the ball up and then look to bring others into play.

We can see a similar situation below again, with Rebić finding space and looking to advance the team up the pitch. Here, with little pressure on him, Rebić’s decision making and vision are good, with him picking out a good run and attempting to play the ball in. However, technically the pass is poor and the ball is lost, something which happens often in his game. In situations like this, Rebić may at times be better served to play more to his strengths and turn and look to drive at opposition defenders. Alternatively, if he can improve his passing, he is a massive threat on the ball.

The Croatian’s passing statistics also back up this point, particularly when we compare him to players who played similar roles positionally in the Bundesliga last season. 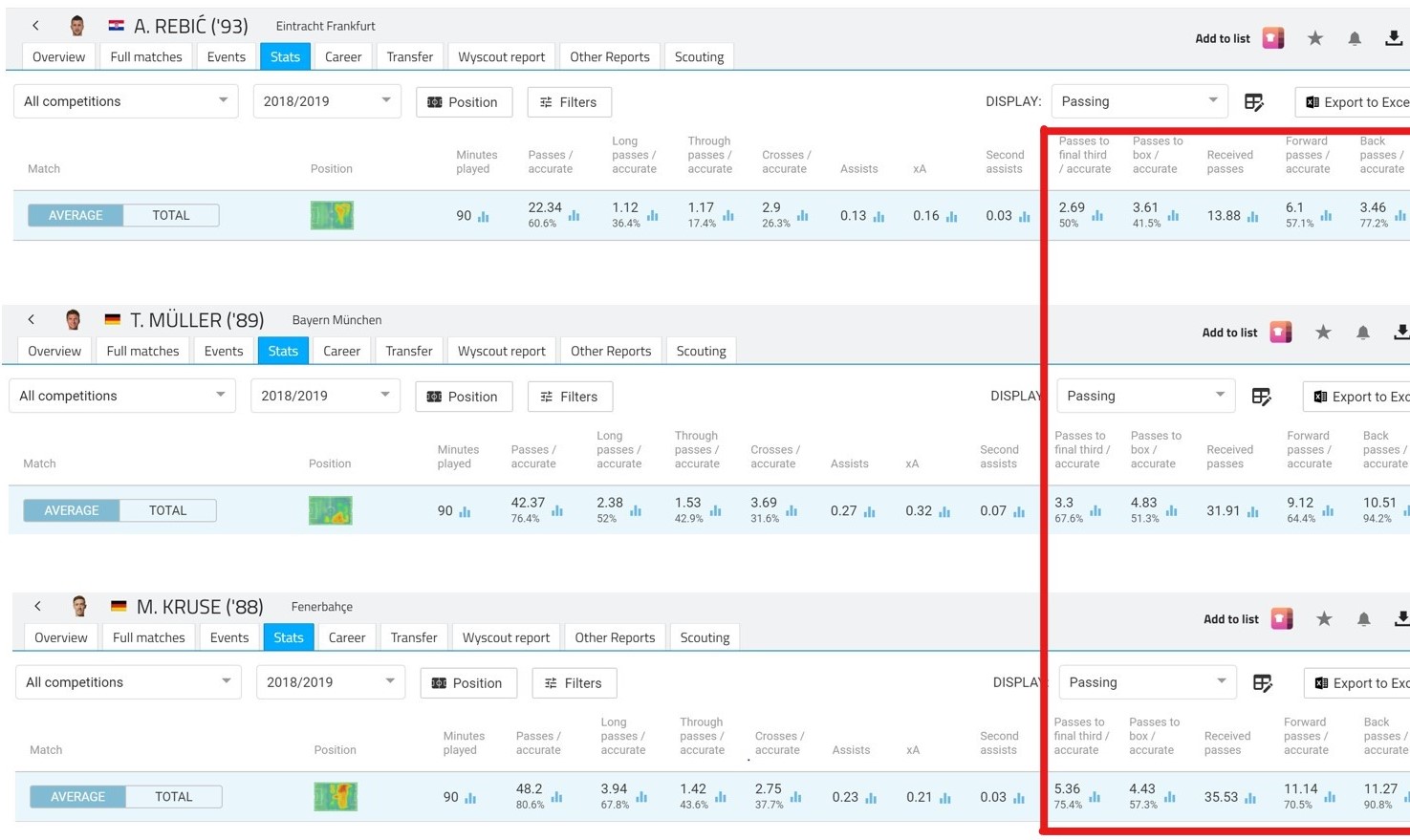 We can see above, Rebić’s passing to the final third accuracy is lower than both Thomas Müller and Max Kruse’s accuracy, as is his passes to the box accuracy. Rebić also plays less forwards and backwards passes, and the accuracy is less than both players. This shows how at times his passing can hinder Frankfurt’s build-up despite his excellent positioning and this is something that if he can work on he can become an even more effective player.

The stats also show how often Rebić receives the ball compared to the two others, possibly because he is not as superior in terms of passing as these two players. I would, however, expect the number of passes Rebić receives to increase this season, as Frankfurt are likely to have to rely on him more now that his former strike partners have left the club this summer.

Rebić acknowledges that he suits the Bundesliga perfectly, and he’s a player, I’m sure, any manager in football would value in their side in some capacity. As described in this scout report, his pace, strength, and dribbling make him a massive threat in transition, and although there are some technical doubts over his ability, he is still a top Bundesliga player. There is still rumoured interest from both Milan sides, but I would be disappointed to see him leave Frankfurt without first trying to become their out and out talisman this season.