Leon Bailey is among the wingers with the highest market value in the Bundesliga and scored five times last season and in addition, provided two assists in 29 appearances in the first German division. The Jamaican joined Leverkusen in January 2017 from Genk and played since then 84 times for them.

During this summer transfer window, many media houses reported that Bayern Munich wanted to sign him as an alternative for Manchester City’s injured Leroy Sané. However, the Bavarians instead bought the 30-year-old Ivan Perišić and Philippe Coutinho, but just the fact that the current champions of the Bundesliga had Bailey on their list shows what an incredible talent the young winger is.

This tactical analysis in the form of a scout report will examine Bailey’s abilities and show the reasons why his market value is currently £36 million.

Bailey’s coach at Leverkusen Peter Bosz prefers as formation a 4-3-3 or 4-2-3-1 and the Jamaican usually plays as the left-winger. In some situations, he and the second winger on the right side change positions but most of the time Bailey is positioned on the left-wing.

Bosz wants his wingers to position wide to stretch the opponent and due to that the players in the centre have more space for passing combinations and starting the attacks. Because of these tactics, the young winger usually positions himself extremely wide and sometimes even on the touchline. These aspects get visible when you look at Bailey’s heatmap for all competitive matches he played last season for Leverkusen in the Bundesliga, DFB Cup and Europa League.

However, this wide positioning has got another great advantage during the match. Sometimes, the opposing full-backs and wingers don’t care that much about Bailey’s wide position and stay more central to keep their team’s compactness alive. Especially then the distance between Leverkusen’s winger and the opponent’s full-back gets bigger and so Bailey can pick up a lot of speed when he receives the ball.

Besides, he’s among the fastest players of the Bundesliga and especially his acceleration is amazing. In light of this, he wouldn’t need that much space to pick up speed but when the opponent gives him the time, it’s logical that it’s even harder to defend against him when he starts to dribble.

But the Jamaican doesn’t just use his speed to dribble past defenders. His teammates also like to try to find him with a through pass behind the last line of the opponent’s defence. His wide positioning increases the difficulty for the opponents to track him and allows him to start the run with some horizontal steps and then change the direction at the moment the pass is played to avoid getting ruled offside.

This gets visible in the shot below. He made some steps into the centre and want to start a deep run in the exact moment when this photo was taken. However, his teammate in possession didn’t pass the ball and so he stops the vertical run, gets back on the height of the last defender and once more runs horizontally for some feet and then changes the direction. This time, the player on the ball plays a good trough ball, Bailey receives it and scores. 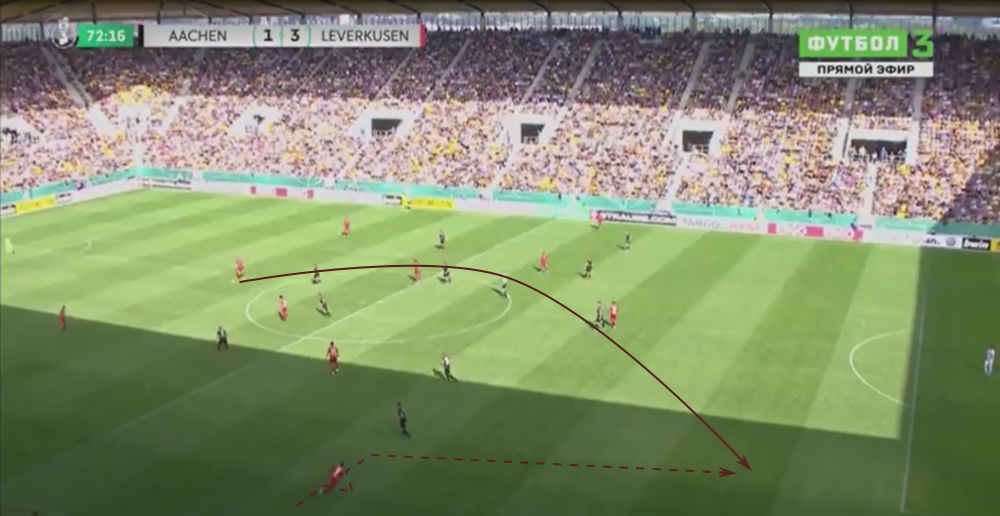 The young Jamaican loves to be on the ball and permanently asks for it what explains why he’s got on average 72.98 actions per 90 minutes last season in all competitive matches for Leverkusen. Furthermore, he mainly uses his strong left foot when it comes to dribbling, passing, crossing and shooting. Considering this, he usually tries to get into positions from which he can pass or shoot with his left foot and so he mainly dribbles past the left side of defenders when he’s in a one-on-one situation against an opponent as we can see in the example below against Bayern. 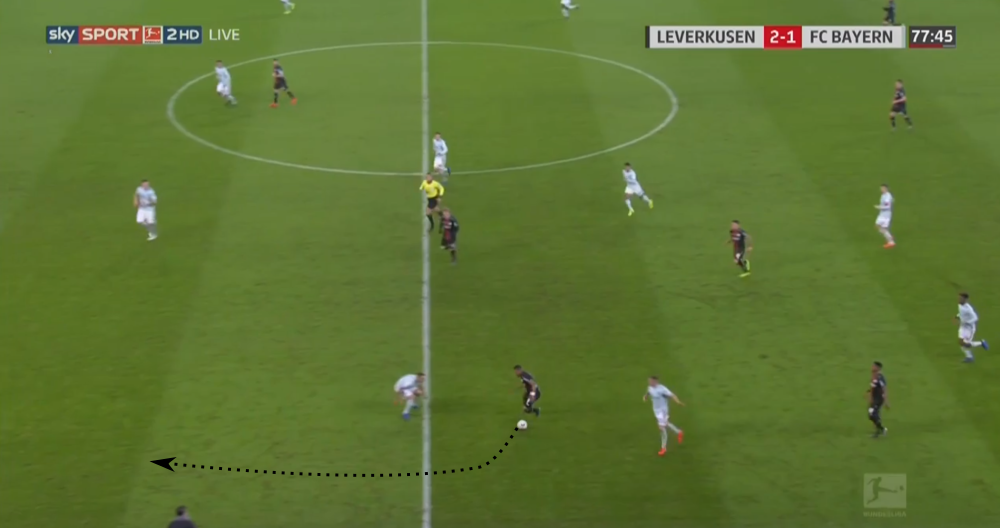 He starts on average 6.61 dribbles per match but just completes 55.1% of them. As already mentioned, he loves to have the ball at his feet but in some situations, he just wants to take on too many opponents at the same time.

Bailey has got a great technique and it’s hard to defend against him when he combines his ability to dribble past opponents with his pace. But meanwhile, all clubs in the Bundesliga know how dangerous he can be when you gift him too much time and space. As a consequence, the opponent’s players try to support each other when he gets on the ball as you can see in the example below. However, he’s not always able to solve these situations as successful as in the shots below and so his success rate is not that high. But this situation shows his great ability to get past defenders.

Since Bailey is a left-footed winger, he doesn’t often dribble inside and if so, he changes once more the direction of his movement to be in a good position to cross or shoot with his left foot as you can see in the images above.

In light of this, one of his typical dribbles is down the wing to have the ball at the left foot and then cross the ball into the penalty box. The Jamaican crosses on average 5.22 times per game and not every single one of them is high since Leverkusen’s usual single striker Kevin Volland isn’t a specialist when it comes to aerial duels. In light of this, he tries to find the best type of cross and deliver this one.

In both examples below, he makes low crosses to find his teammates in the middle. In the first case, he hasn’t got any choice since Volland is the only one in the centre and a high cross wouldn’t make sense. In the second situation, he has got two teammates in the centre but plays a long low cross to Karim Bellarabi since he hasn’t got any opponent who is marking him. 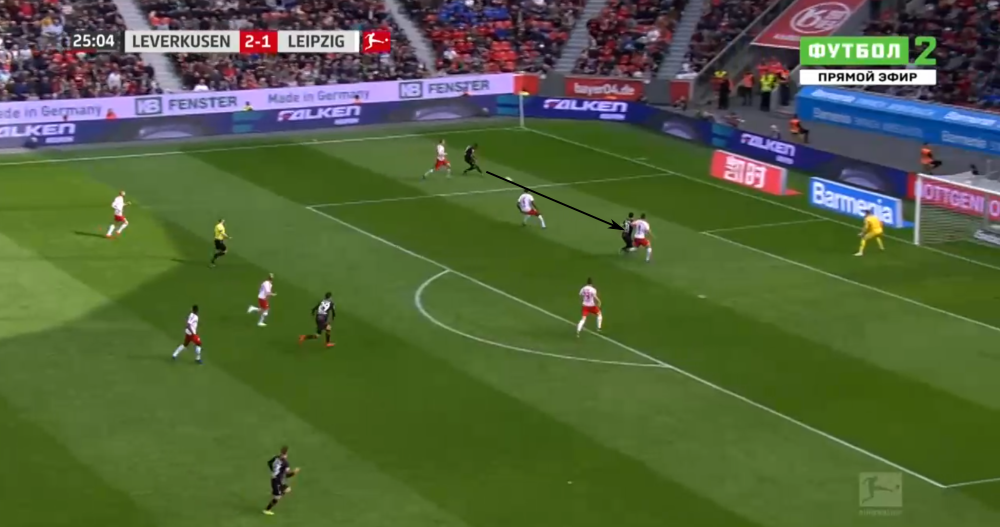 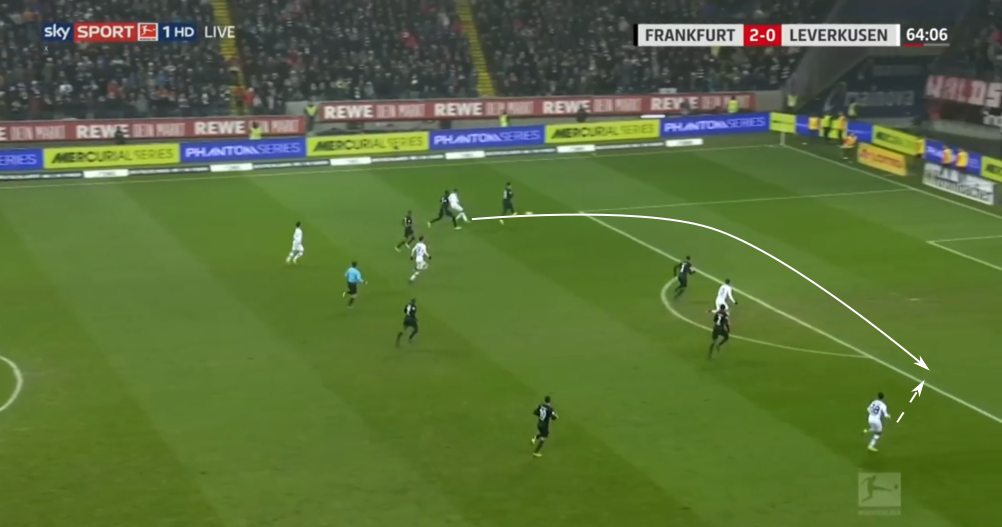 When the Jamaican is on the pitch, he takes almost every corner as well as most of the freekicks. We already heard that he crosses quite often during a match. However, Leverkusen converted last season just one of Bailey’s corners to a goal. Also, they signed Kerem Demirbay who is beside Bailey and Julian Brandt now a third player in the squad who can deliver great crosses and corners. In light of this, it’s questionable how many corner kicks Bailey will deliver this season.

Two out of his five goals last season in the Bundesliga were direct freekicks. Bailey is able to combine precision with power when it comes to his shooting ability. In addition, he looks where the goalkeeper positions himself and based on that he chooses the corner. In the first example below, the goalkeeper is positioned more in the right corner even though his wall is on that side. Due to that, Bailey fires a shot into the top left corner to score.

Usage of pace to help the defenders

When we look at his defensive contribution, he mainly uses his incredible speed to win defensive duels. He makes on average 4.01 recoveries per game what is quite good for a winger. The young Jamaican sometimes gets caught out of position but then uses his pace to make up some ground to get into a duel in which he mostly uses his physical strength to win it as you can see in the images below.

As this analysis showed, Bailey already has got incredible abilities on the ball even though he’s just 22 years old. His undeniable speed combined with his great technique makes him a nightmare for every defence.

Also, he could be an even more valuable player if he could work on his goal threat since he scored last season just five goals in the Bundesliga. It will be interesting to watch how often Bosz will let him play and how the Jamaican will perform this season.