Philippe Coutinho’s highly anticipated transfer to Barcelona did not go as planned, being resigned to limited minutes and a different role by then manager Ernesto Valverde in the latter stages of the 2018/19 season. The Brazil international opted for a change of scenery at the end of the campaign, joining Bundesliga giants Bayern Munich on loan with the German club having an option to buy for €120m. Die Roten signed the former Liverpool star to replace James Rodriguez who was on loan at the club for two years himself, but returned back to Real Madrid after Bayern decided not to trigger his buyout clause.

It seems increasingly likely that Coutinho will suffer the same fate as his predecessor as it looks like Bayern won’t trigger the clause given their squad depth in the attacking areas and the huge sum they would have to pay. However, that is not to say that the attacker was poor for the German giants and did not showcase his talents. Coutinho has had an underrated season in Bavaria and he has shown that he still has the quality to play for Europe’s finest.  This tactical analysis will aim to provide you with a scout report on the 27-year-old and his impact on Bayern Munich’s performances this season.

As a playmaker, the best asset you should have is passing – something that Coutinho has in abundance. Playing as either a forward or an attacking midfielder at Bayern, he has an incredible 84% pass accuracy. He plays 1.4 key passes per game, which is quite low for a creator of his ilk especially since he was able to reach a peak of 2.9 key passes per game at Liverpool. However, this can be explained by the fact that he plays a slightly different role at Bayern and is not the chief creator for them like he was at the Reds.

His brilliance in passing comes from his exceptional technique and ability to make difficult passes look easy. Below, Coutinho and Lewandowski recognise the huge space behind the opposition’s backline that can be exploited. However, Lewandowski is closely marked by two players who would be able to intercept a through ball. Coutinho, who himself is under pressure, notices this and can play a perfectly weighted scooped pass to put Lewandowski through on goal for a fantastic assist. The pass sums up Coutinho’s ability on the ball and is an asset that only a few have in the world let alone the Bayern squad. 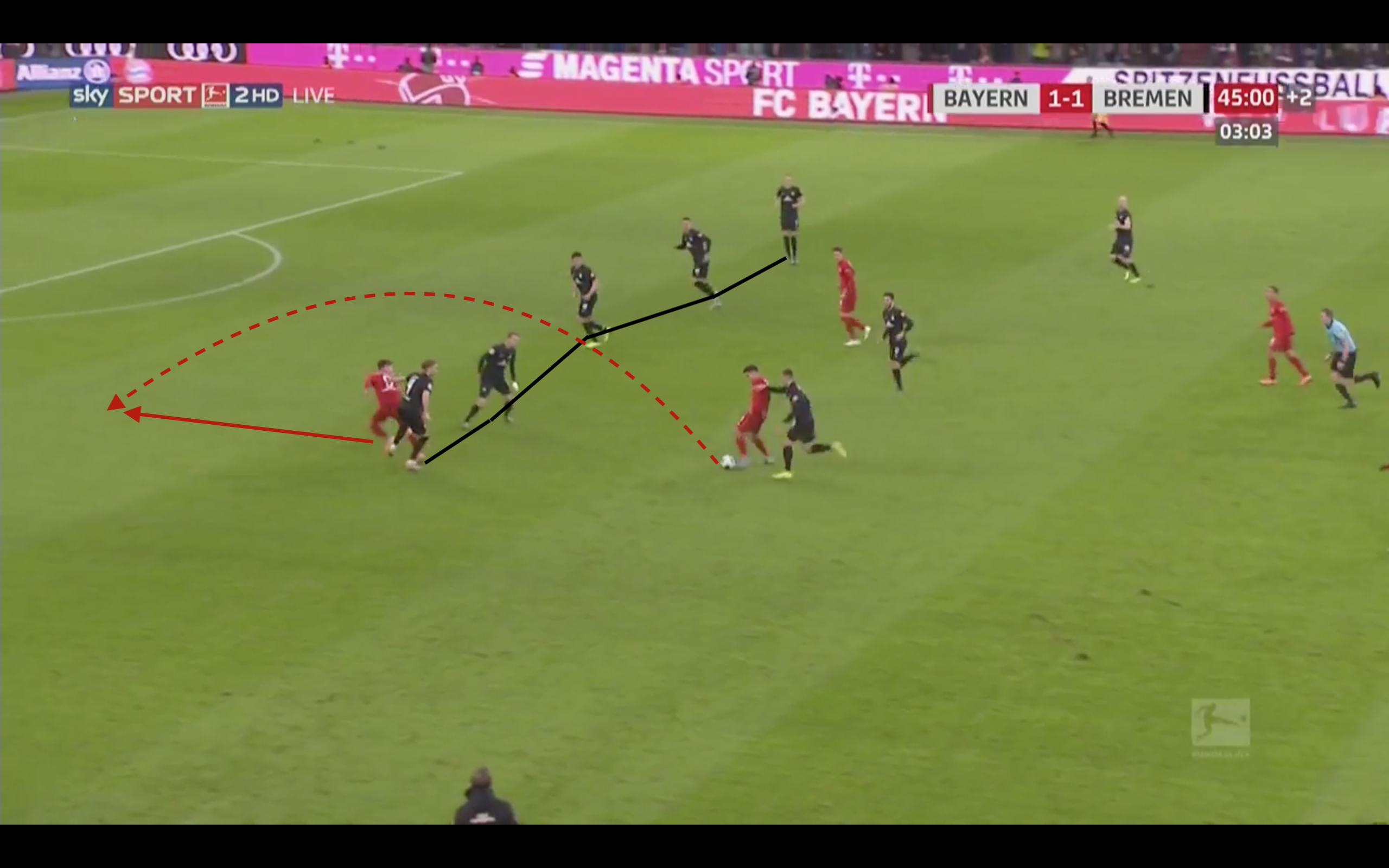 He also has a great variety of passes and is capable of playing great long passes but his influence in the final third is what makes Coutinho special. He can dissect the opposition with defence-splitting passes, which leads to great chances for his team. He is able to do this at a high level and often has a lot of the opposition defenders keying on him since they are wary of his quality.

The image below is a great example of this. Coutinho is under pressure with two players close by. The Brazilian can use his nifty footwork and superb passing range to fashion some space and deliver a fantastic pass into the open space for Gnabry. Gnabry then takes advantage of the defenders focusing on Coutinho and makes a blind run in behind and is thus able to score with ease. 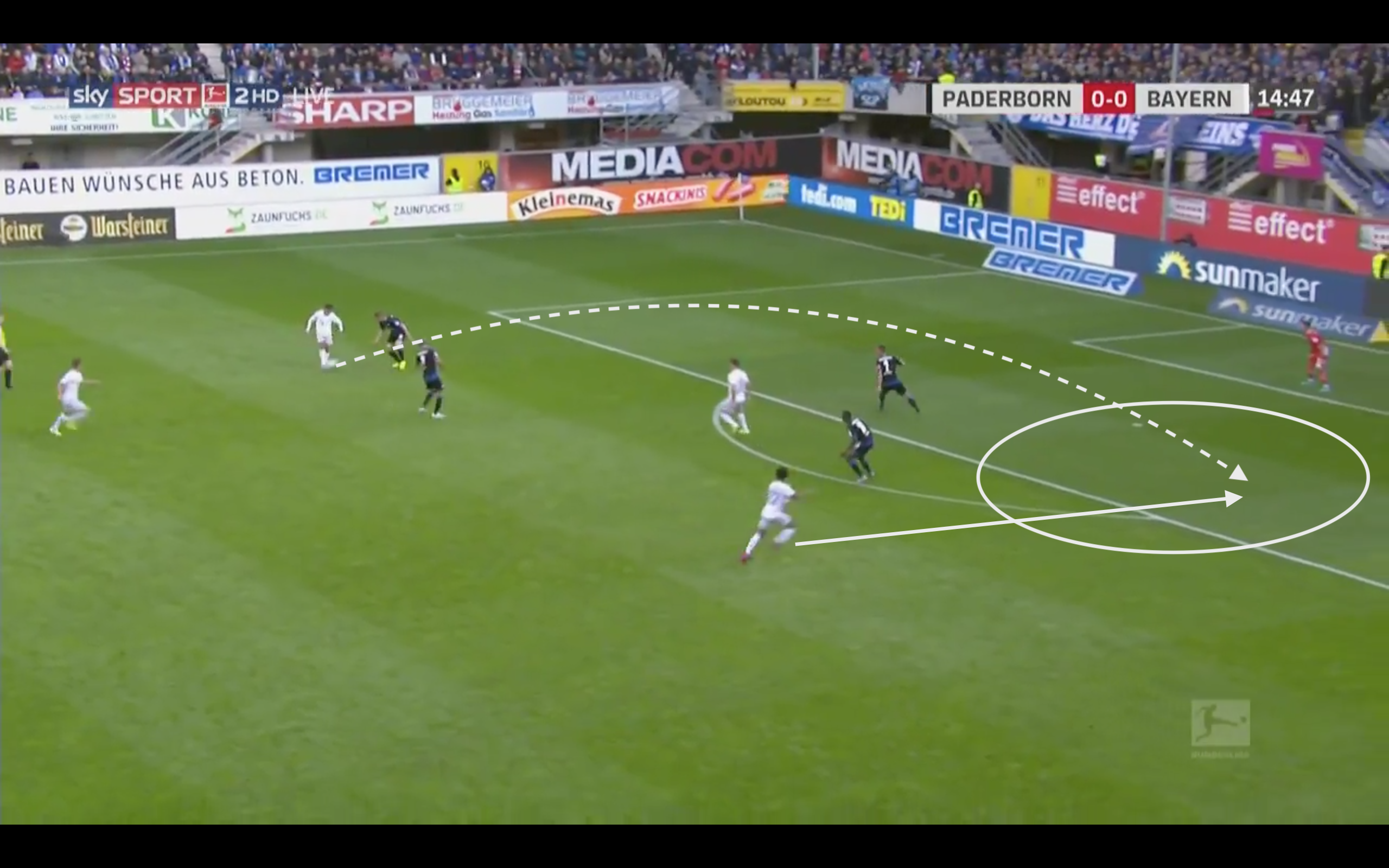 Fans of Coutinho will know that his ability to take shots from distance is a staple in his game and he has continued to display this at Bayern. Looking at the underlying numbers, there are some surprises. For a quality long shot taker, Coutinho is slightly underperforming xG this season as he did last season for Barcelona, which are the only seasons that he has done so. This season he has scored eight goals in the Bundesliga but his xG stands at 9.07. However, it is not a surprise that Coutinho takes 3.74 shots per 90 which is only less than Lewandowski and Serge Gnabry. 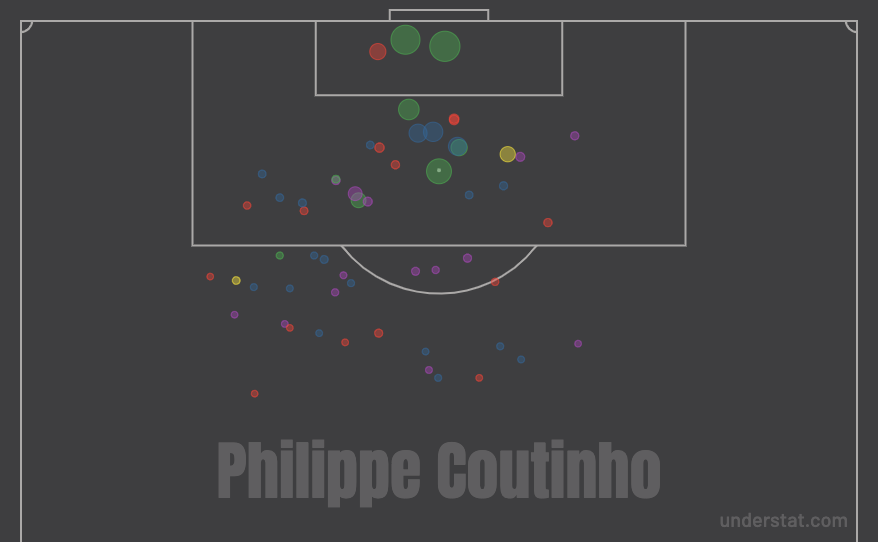 Above is a chart of Coutinho’s shot locations. He takes some good shots inside the area thanks to his great off the ball movement and positioning but he takes just as many shots from outside the box. Most of his shots come from the left-hand side given that he usually likes to occupy the left side of the pitch to cut in and shoot. The Brazilian is exceptional on both feet but his willingness to stay on the left side and cut in makes him somewhat predictable and is a reason as to why a lot of the long-range efforts are blocked.

As an attacking player, it is imperative to be able to find and manipulate space. Coutinho is able to do that very well, which allows him to either get into great positions to create chances or get onto the final ball for a goalscoring opportunity. This points to his great ability to read the game. 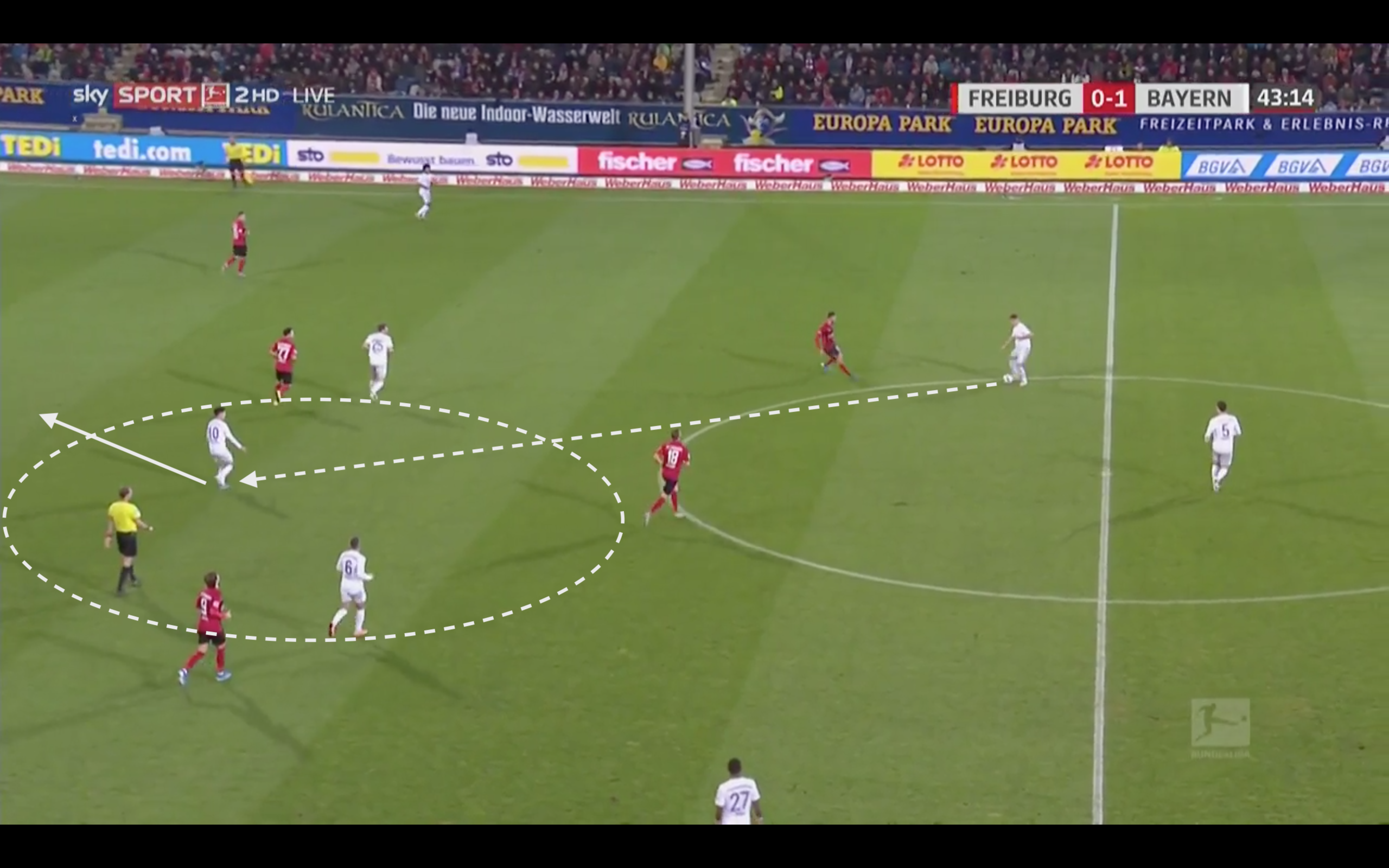 Here, Coutinho finds himself in a huge pocket of space as he so often does. Joshua Kimmich finds him with an easy pass and Coutinho has enough space to turn and drive into the defence. It allows him to get into a good goalscoring chance but his shot is saved.

When he plays centrally, he can find these positions on a more consistent basis given that he doesn’t have to stay wide. This allows him to create chances more often too as the attack goes through him and he can use his technical ability and play his teammates through. 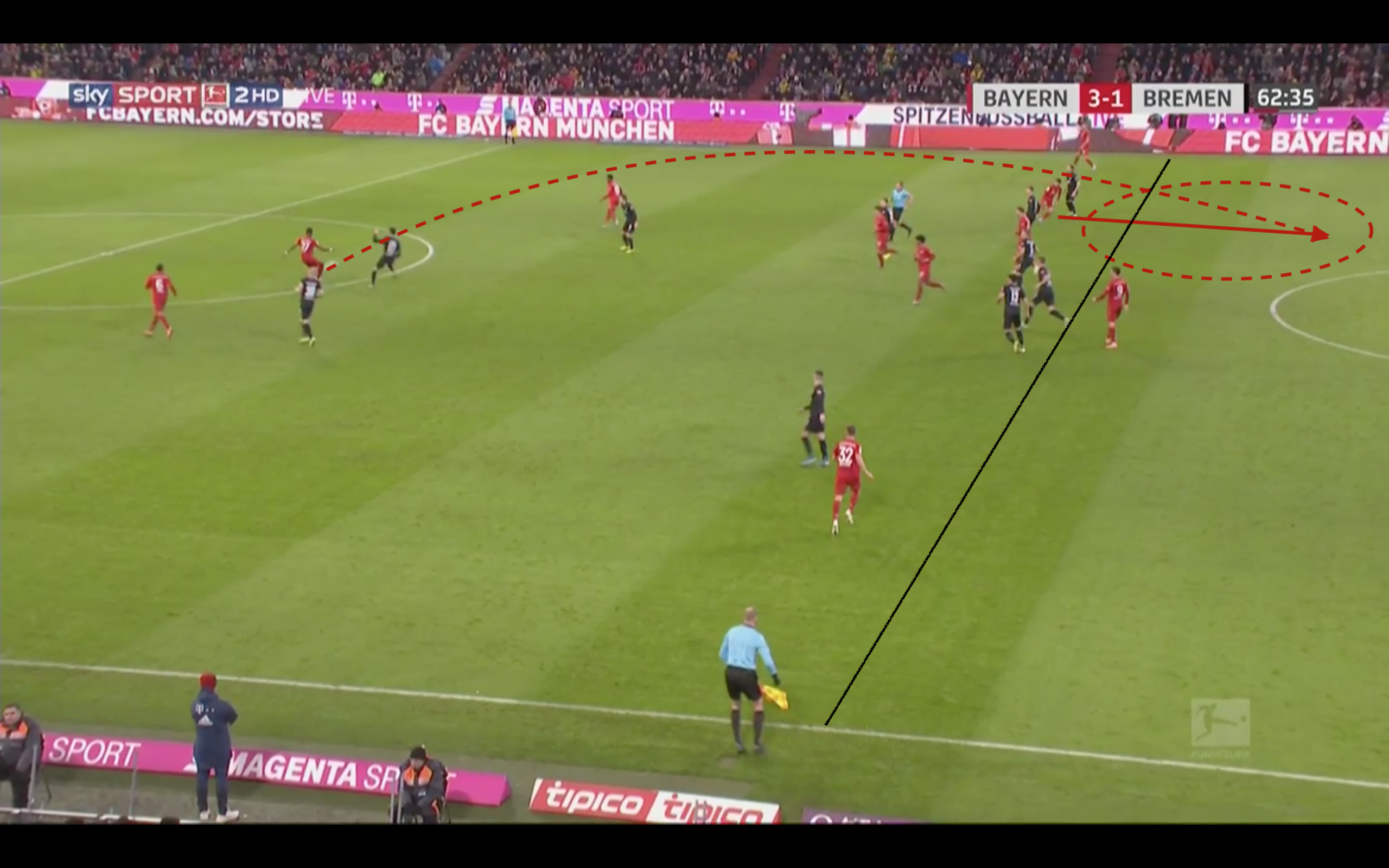 The example above is one of Coutinho getting onto a pass for a goalscoring opportunity himself. The 27-year-old recognises the space in behind the defence and that the opposition’s offside trap has failed since they are not on the same page. He makes eye contact with David Alaba who has possession of the ball.

That is the signal for him to make a darting run in behind, taking advantage of the static defence, and Alaba plays a great long ball into his path. Coutinho takes it down brilliantly before scoring with a sensational lob past the onrushing keeper. 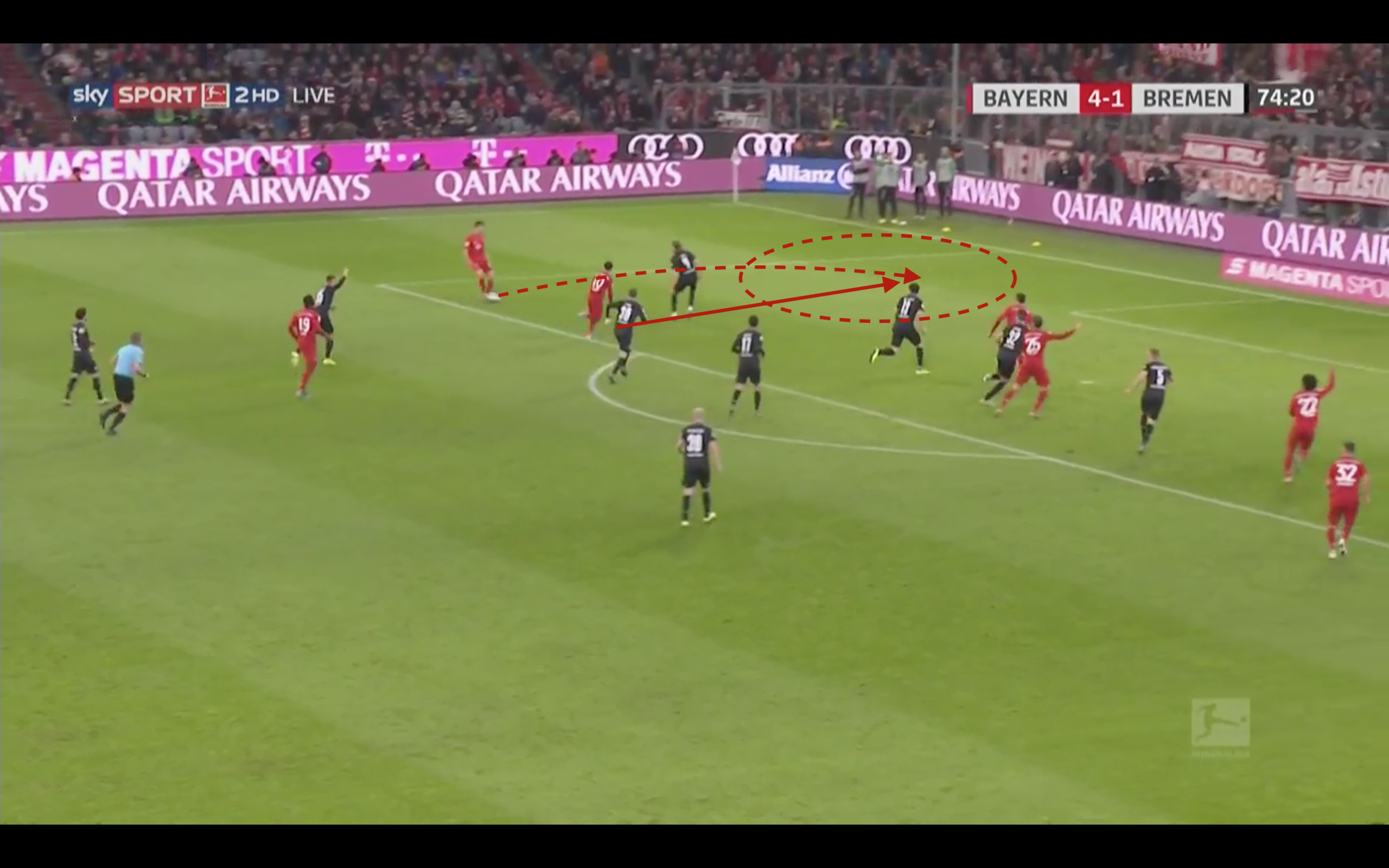 His movement inside the box is great too as shown in the example above. Here, Coutinho recognises the space and runs into it instead of waiting on the edge of the area to get a shot off. The 2vs1 situation favours Bayern as the defender is left stranded not knowing whether to press Ivan Perišić or watch the run from Coutinho. After running into space, the Brazilian cuts the ball back for Müller who can score with ease. This is often a move done by Bayern and credit has to go to the tactics from Hansi Flick but the execution from the players, in particular Coutinho, is top tier.

The variety and quality in his movement and positioning make him an asset for any club as it showcases his versatility as an attacking player. He can either play as an attacking playmaker or as an inside forward and these traits are fundamental for success in those roles. Added with his unbelievable technical ability, he becomes a very dangerous force in the attacking phase of play.

The Brazil international has featured as either a left-winger or an attacking midfielder under both Niko Kovač and Hansi Flick for Bayern. Below is Coutinho’s heat map, which showcases how he has been utilised at Bayern in terms of a positional sense. It’s more or less what one would expect from a wide playmaker – most of his work is done in the wide areas but a significant amount is done centrally too. This shows his flexibility in attack and helps Bayern continue to play a fluid front four that constantly switch positions. 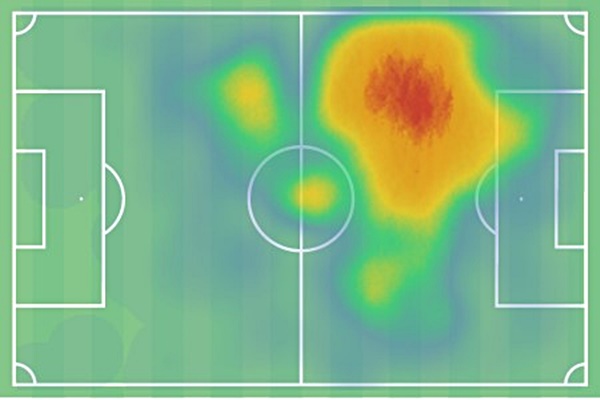 Coutinho is rarely involved in the build-up play with his expertise coming in the attacking phase. With Müller taking most of the creative burden in the attack, Coutinho is free to roam and express himself. When he does have the ball in the final third, he usually picks it up in the left half-space and has two options.

The first is to play the overlapping left-back in, who is then able to cross or cut the ball back. The other is to cut inside and have a shot or have quick interchanges with his teammates. 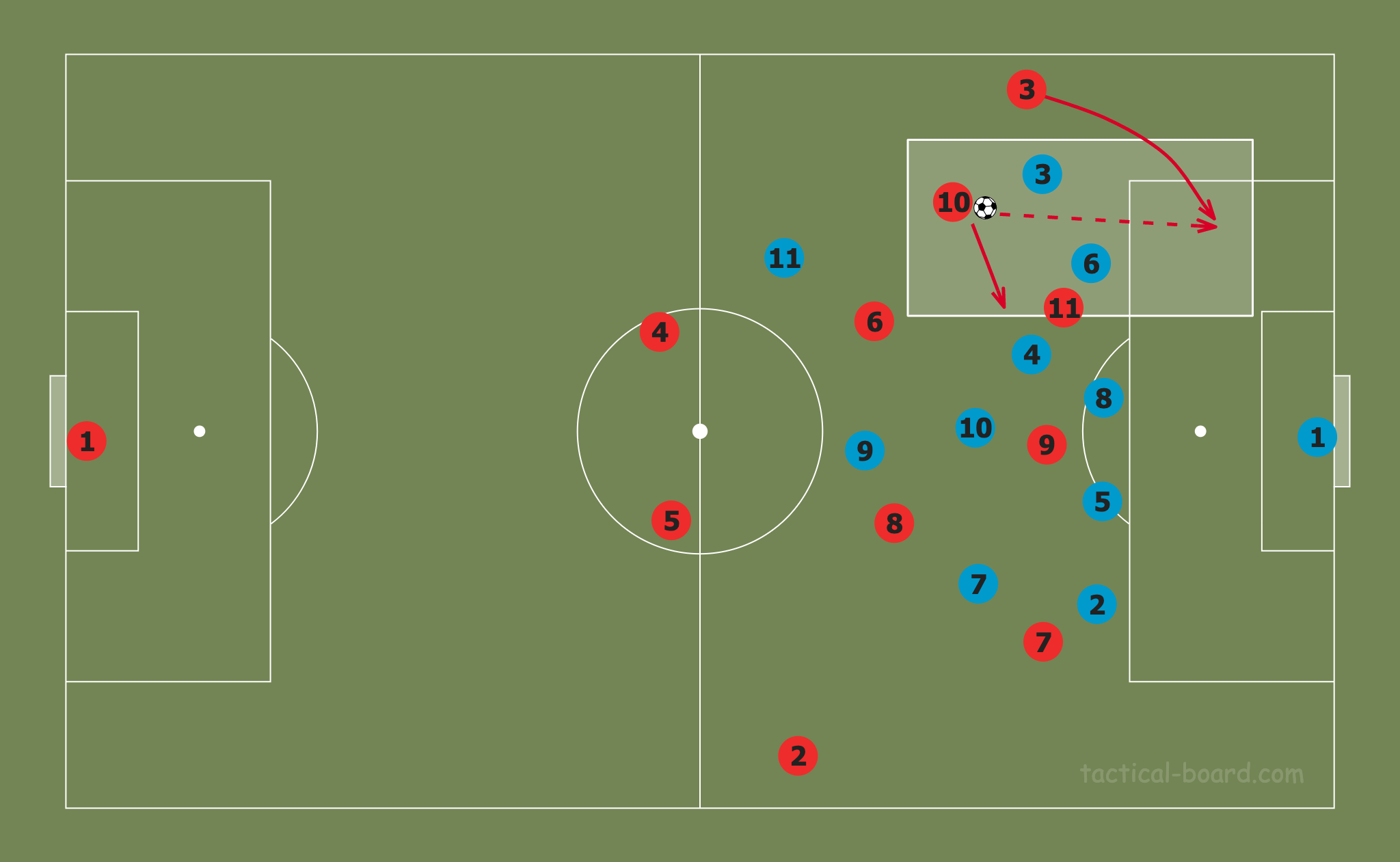 When Coutinho is playing the number ten role, he can impact the attack in a different way. The example below encapsulates the midfielder’s threat and Bayern’s system around him. As mentioned previously, he can make extremely difficult passes and is a great threat from distance which means defenders are wary of his impact.

Here, the opposition are very compact to make sure that Coutinho has limited space to either take a good shot or play a teammate through on goal. Bayern can take advantage of this by having players extremely wide on both sides to cross the ball or, in this instance, have a shot on goal. Coutinho can play Gnabry in, who is in a huge pocket of space, and he cuts in before having a shot on his left foot that hits the post. This is a play that Bayern like to use a lot and is a reason why they have completed the most crosses in the Bundesliga. 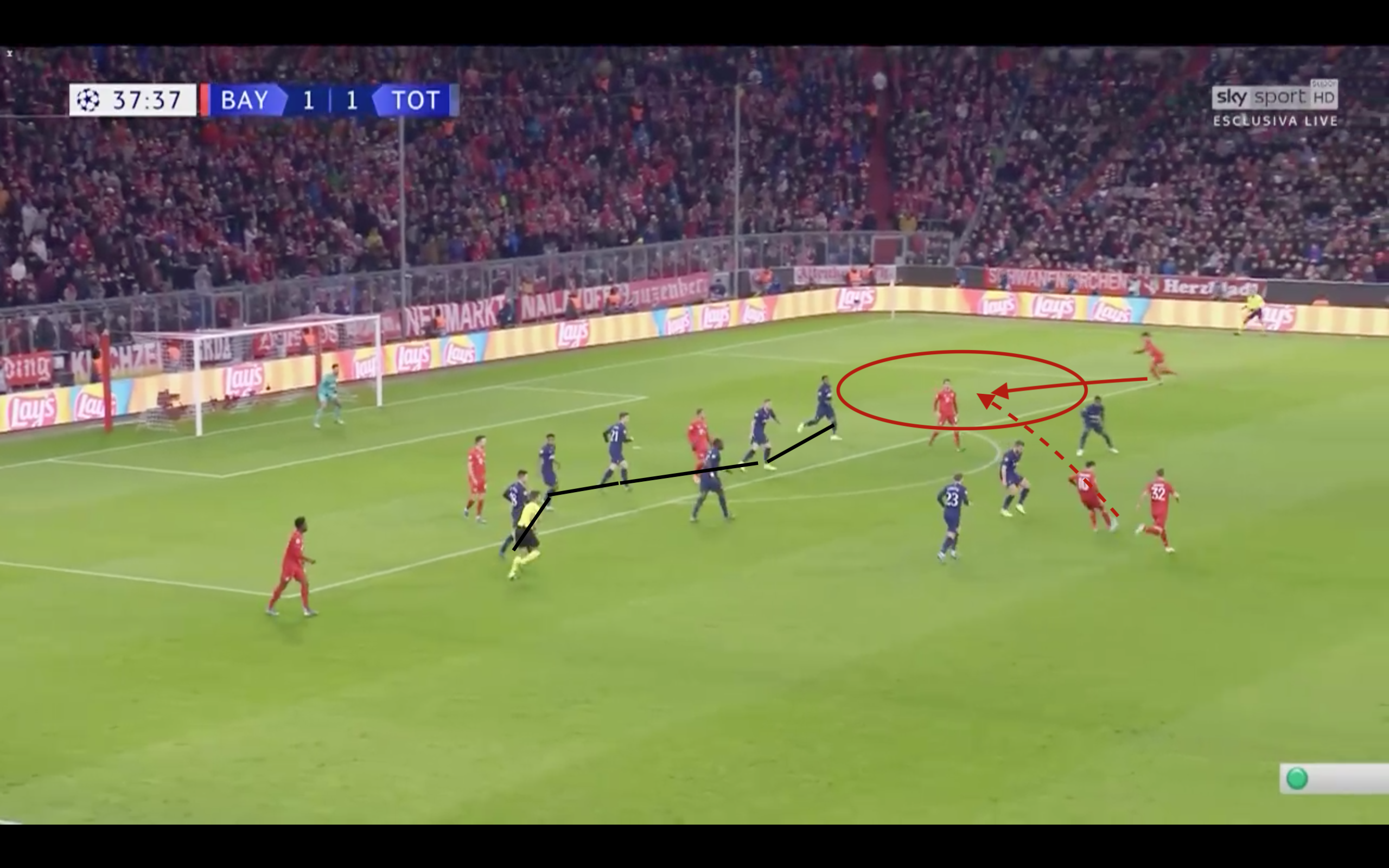 If Coutinho is so great, why has his season gone under the radar and why are Bayern unwilling to trigger his buyout clause?

Well, aside from the personnel at the club and financial implications, there are some weaknesses in Coutinho’s game that don’t look like they can be fixed. First is his defensive contributions. Bayern are a side that are extremely aggressive in the press, which is shown by their league-best PPDA value of 7.29. Coutinho is able to take part in static scenarios such as goal kicks or throw-ins but lacks in general defensive contributions. He has 1.3 tackles and interceptions per game which is not bad for an attacking-minded player. However, it is the second-lowest figure out of players who have played over 1000 minutes in Bayern’s attack and midfield. This is one of the reasons why Coutinho has not become an undisputed starter at Bayern with both Kovač and Flick unimpressed with his defensive work rate.

Another fault in Coutinho’s game is his decision making, which can be hit and miss. His technical ability is able to bail him out in several situations but sometimes he makes the wrong decision. He is either taking shots from distance when players are in better positions or, like in the example below, holds on to the ball far too long and tries to dribble in spaces that are too tight to get out from. 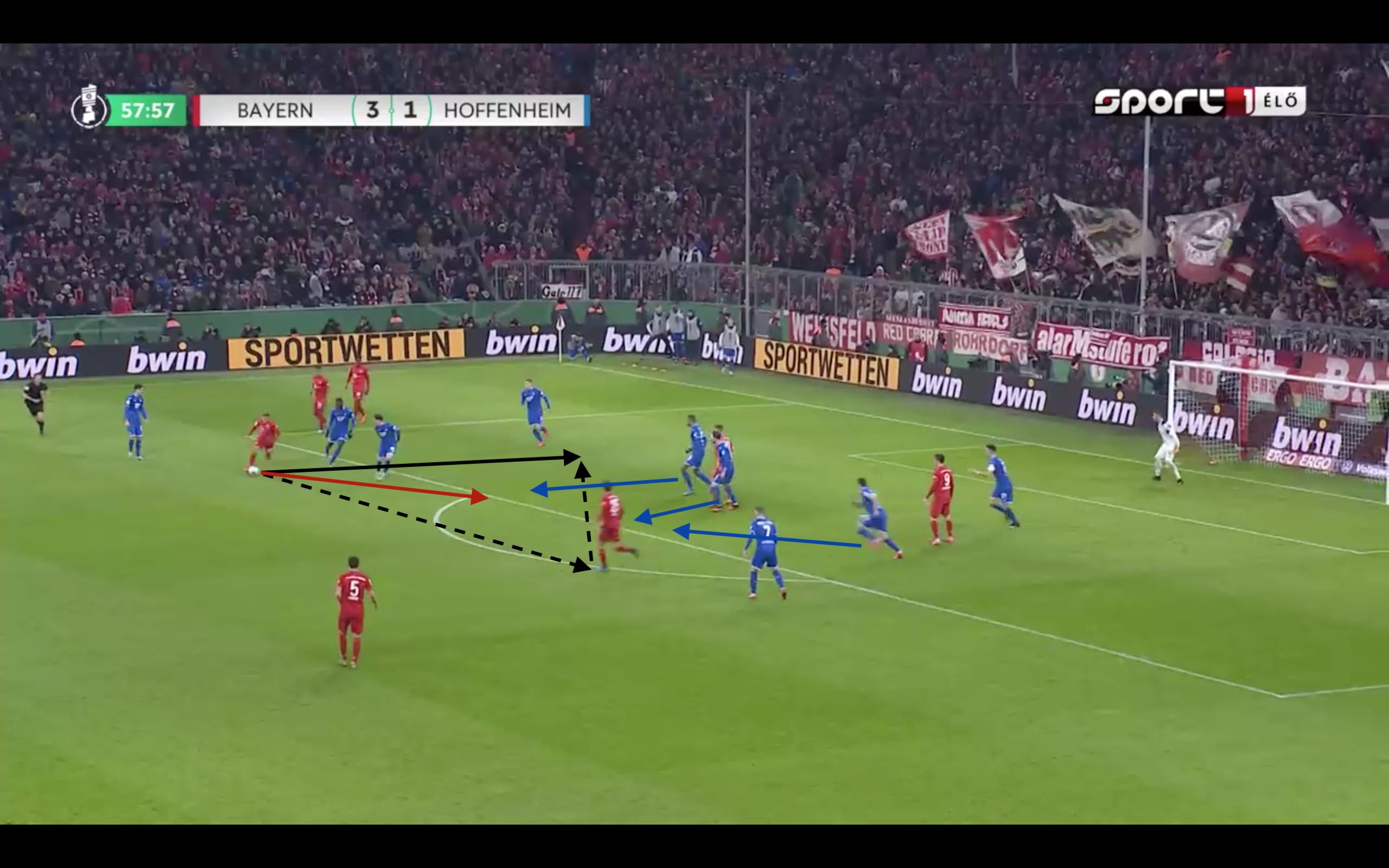 In the example above, Coutinho has the ball on the edge of the box and is closed down by two opponents. The red and blue lines represent the action that occurs with Coutinho driving into the middle with four or five opposition defenders closing in on him and winning the ball back. The black lines represent the action that Coutinho could have done for a better opportunity to have a chance at goal.

This scout report and analysis of Coutinho’s season have shown that his contribution for Bayern this season has gone under the radar given the outstanding campaigns of Lewandowski, Gnabry and Müller. The 27-year-old has an impressive 14 goal contributions in the Bundesliga with a goal or assist every 99 minutes. Given that he is not a guaranteed starter, this a great return.

He has been a great replacement for James Rodriguez but with the excessive price tag and the narrative surrounding his talent, his season in Germany was seen as bad. The Brazilian still has a lot to offer and perhaps Quique Setien at Barcelona could help give him a role at his parent club that showcases his quality for the world to see.

Despite participating only in a few of Italy’s games on Euro 2020, Matteo Pessina’s performance was very important in their […]