Fans of the Bundesliga will be familiar with Croatian winger Ivan Perišić, who has joined Bayern Munich on a season-long loan deal from Inter Milan. Perišić played for Borussia Dortmund and VFL Wolfsburg over four seasons from 2011 – 2015. He scored 27 goals and made 16 assists in 112 appearances in Germany.

However, it was his move to Inter Milan where he began to flourish. He scored 37 goals and made 31 assists in 141 games for the Italian side. He returns to Germany to compete with Kingsley Coman for the left-wing position vacated by Franck Ribéry.

Bayern Munich were pushed all the way last year in the title race by Borussia Dortmund. Without the aforementioned Ribéry and newly-retired Arjen Robben, Munich had to swiftly replace the wingers. Callum Hudson-Odoi, Leroy Sane, and Gareth Bale were all names linked with the reigning champions, yet they ended up signing Perišić.

This tactical analysis and scout report will look at how Perišić will fit into Bayern Munich’s system and will give Bayern fans an idea of the type of winger they have signed.

Perišić is coming off of a very strong season for Inter. Although not quite reaching the heights from the year before that led to Manchester United’s very public pursuit, he still managed nine goals and eight assists. Despite scoring 11 goals in each of the two previous seasons, his xG for the 2018/19 season was his highest yet, at 11.88.

In many ways last year was his strongest season to date. He also averaged his highest percentages for successful dribbles, cross completion, pass completion, and offensive duel wins, over his entire stay in Italy. Bayern are signing a winger who is at the peak of his powers.

Improvements in his game

At the Nerrazzuri, Perišić became a serious goalscoring threat. A reason for this is that he was simply taking up better positions. Last season he made 110 more touches in the box than he did in his first season in Italy. Inter’s tactics often revolved around using a 4-2-3-1 formation throughout his four seasons there, and Perišić was mainly used as a left-winger.

His increase in goals scored coincides with him taking positions further up the field, as well as staying less rooted to the wing.

Above is an image of Perišić’s heat map from his first season. We can see that he plays relatively deep and very wide, and rarely found his way into the opposition 18-yard-box.

If we compare that to his heat map from last season, we can see how he is coming inside more often, occupying the half-spaces, and getting himself into the 18-yard-box more frequently. He had the fifth-highest amount of touches inside the box in Serie A last season, with 5.3 per game.

We can also see how much more Perišić occupies the space to the left of the 18-yard-box than he was before. This suggests he is getting himself into areas to cross the ball more frequently.

He can play as an orthodox winger, taking the ball down the line to cross it, but is just as confident coming inside to look for the ball.  He looks for quick interchanges with the centre-forward and sharp movement in between and behind the backline.

The heir to Ribéry?

As the 2018/19 season progressed, Ribéry was used less and less by Niko Kovač. Despite being a living legend of the game, his powers were clearly fading. He contributed, as always, with seven goals and four assists. However, he had a 4.42 xG, his lowest since his injury-ravaged 2015/16 season. Coman and Serge Gnabry were used frequently to take the load off of the aging Ribéry and Robben.

Coman was excellent in front of goal, scoring 10 in all competitions, however, managed only three assists all year. Gnabry was better, scoring 13 in all competitions, and providing five assists. It was a productive year for all of Bayern’s attacking wingers, with Robben, Gnabry, and Coman joining Ribéry in outperforming their xG. Clearly, Kovač is doing something right with his wingers and with Perišić scoring less than his xG last season, we could see a big improvement in his form in front of goal in this campaign.

Ribéry and Perišić are similar players. They both like to cut inside from the left and are as comfortable playing close to the centre-forward, occupying the half-spaces, as they are playing wide on the left-flank, isolating the right-back, and crossing the ball. Bayern will hope the Croatian can pick up where Ribéry left off.

Perišić’s dribbling has gone from strength to strength, successfully completing 65.4% of his 5.54 dribbles per game last season. This is high, even for a winger, and he had the eighth-highest completion percentage in Serie A for 2018/19.

When taking on a player his goal is to get behind them and make a cross. In last season’s Serie A he made 6.81 crosses per game, with 30.9% of them meeting their target. Out of his eight assists for Inter, six came from crosses.

He also made the second-highest amount of crosses in the league last season, with 217. This was behind only Manuel Lazzari of Lazio.

With both his dribbling and crossing ability, Perišić is a huge threat with the ball on his left-wing. His trademark is to run at a defender, take them on with a stepover, before taking the ball to the line and pulling the ball back for the centre-forward. In fact, in the 2017/18 season game at Roma, he provided two identical assists with this exact move and cross. 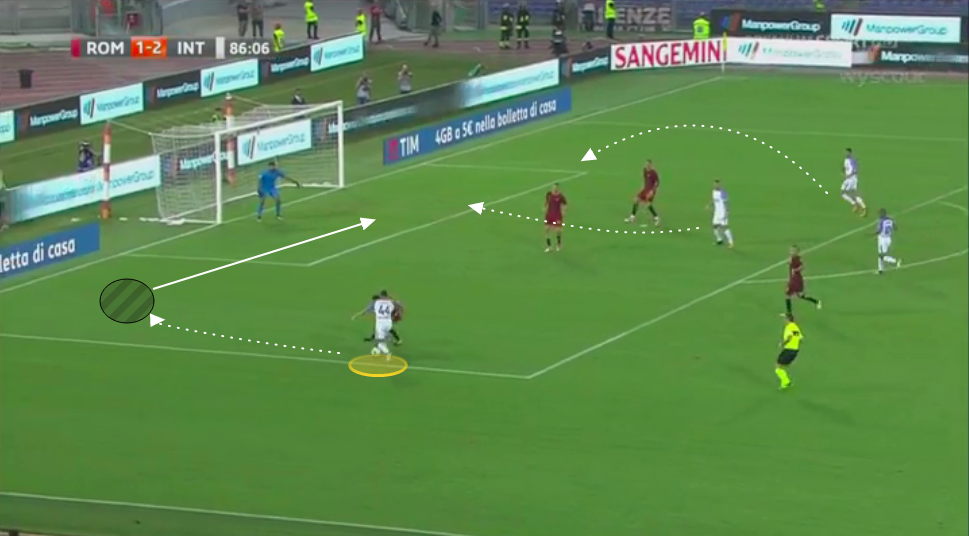 Perišić looks to avoid man-marking and control space. He wants to be able to run at defenders with the ball, or when looking to receive. This is particularly the case when the ball is not down his left side. 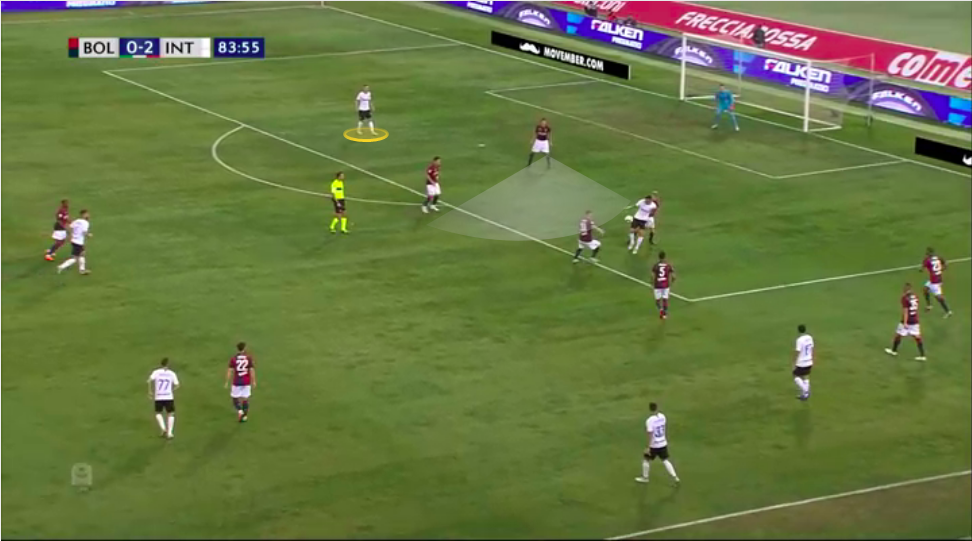 In the above analysis, we can see how he likes to drift off of the right-back into space. With the opposition defence playing narrow he is creating room to attack the ball should it be played across goal.

Below we can see another example of this. With the ball about to be crossed, Perišić again drifts off of the defender and has space to make a run behind the defence. 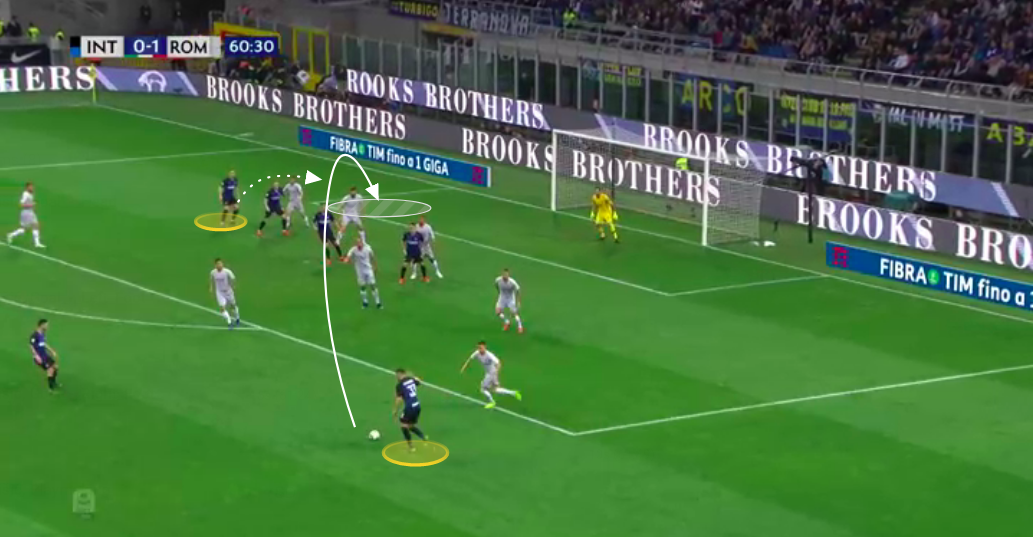 Like Robben and Ribéry, Perišić willingly cuts inside, and although he is left-footed, his right foot is just as good. He often cuts inside when he is close enough for a shooting opportunity, in order to improve the angle.

He does have a tendency to shoot from range, where he hasn’t been greatly successful, or accurate. In fact, his accuracy overall isn’t great, with only 32.7% of his shots hitting the target for Inter last season. The goals that he does score come from a mix of right-footed, left-footed, and headed finishes.

When playing deeper he is confident enough to cut inside and look to play in one of the forwards in a vertical passing lane. Despite only having a 73.1% pass completion for Inter last year, he completed an impressive 71.4% of his passes into the final third in the 2018/19 Serie A.

Perišić is a relatively risk-free addition by Bayern Munich. He comes with no major financial outlay, at least not yet, and is familiar with the Bundesliga. Perišić was a promising talent whilst at Dortmund and Wolfsburg, but has pushed on at Inter and is coming back to the Bundesliga as a better player.

He will bolster a weakened squad and will add good competition for the wing positions with Coman and Gnabry. Perišić may not be a marquee signing, but Bayern have been astute in their summer business. Along with the Croatian winger, they have brought in Philippe Coutinho, Lucas Hernandez, Benjamin Pavard, and Mickaël Cuisance. These players have come in as a much-needed facelift for the German champions. Perišić will be given plenty of opportunities to cement a starting place, as will the other signings.

There has been a lot of noise about Borussia Dortmund’s chances to finally reclaim the Meisterschale this season. But Bayern have gone about their business relatively quietly and Perišić is a signing who will strengthen them.