The Premier League 2021/22 season is well and truly up and running. There have already been some exciting individual performances this season, especially by young players. This analysis will be focusing on players aged 23 or under and the following visualisation shows the best attackers so far within this category. 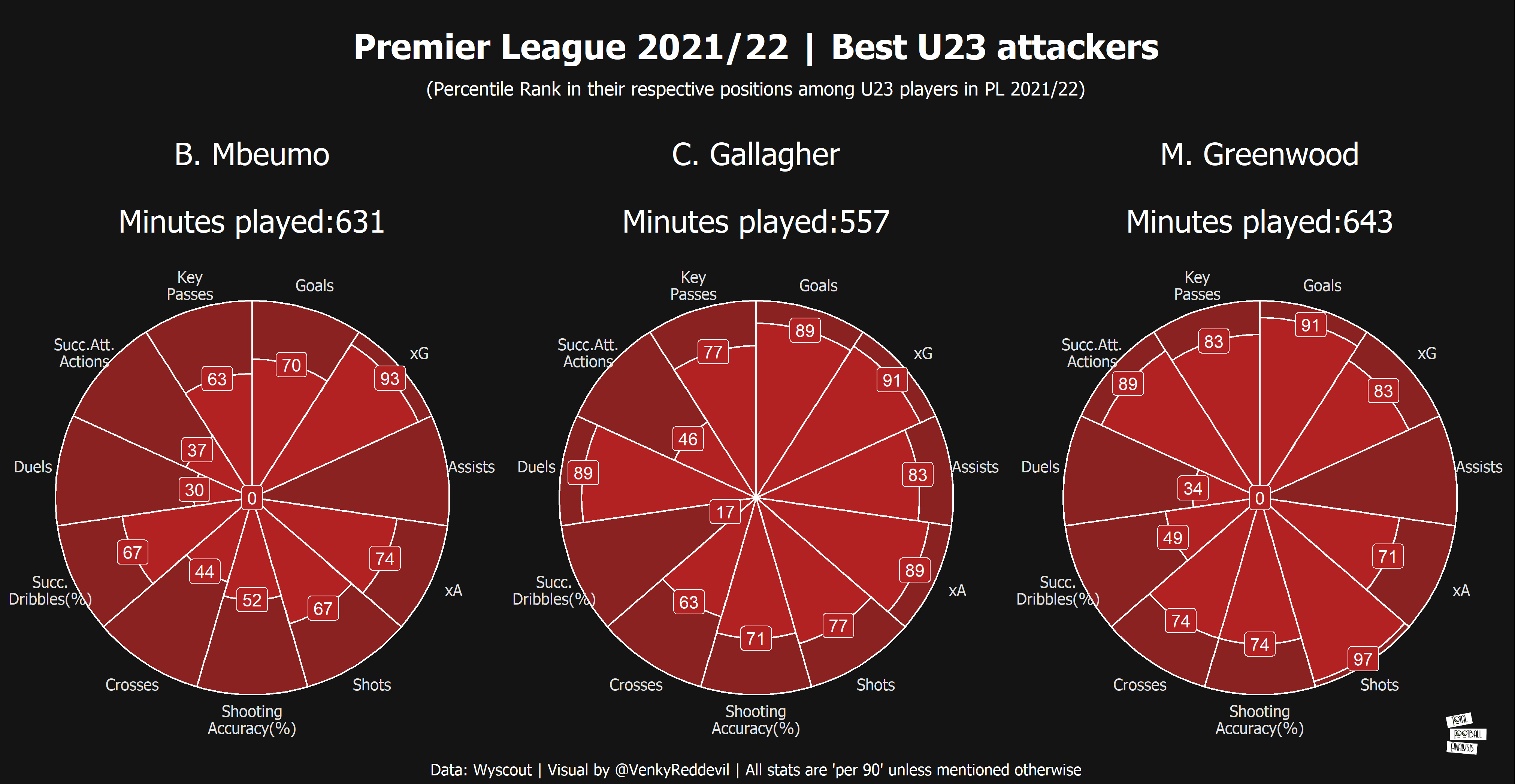 Brentford, unsurprisingly, have had an excellent start to the season after being promoted from the Championship. One player who has played a big role in helping Brentford settle well in this league is Bryan Mbeumo. The versatile wide player who has, at times, played centrally for Brentford, has started every game so far. Mbeumo has two goals to his name so far, however, his underlying numbers speak for themselves with the 22-year-old ranking 93rd percentile among U23 attackers for xG per 90. He has lacked end product in the final-third and if he improves that aspect of his game he could end the season as one of the best U23 players in the league.

Connor Gallagher has been on the move for the last few years. The 21-year-old Chelsea Academy player has moved to Crystal Palace this year on loan and he has started the season quite impressively. Gallagher has been one of, if not the, best U23 player, in the league. As indicated by his radar in the visualisation above, Gallagher has put in an all round attacking performance so far bearing the responsibility of both scoring and creating for Palace. Gallagher has scored two goals and assisted one goal so far. Palace will now rely on Gallagher for creativity in addition to Zaha who has been the sole creator for Palace for the last few years. Gallagher is surely one of the players to watch out for this season.

Manchester United, as always in the last few years, have had a very disappointing start to the season in terms of performances. However, one player who has stood out is Mason Greenwood. Greenwood has very frequently started as a centre-forward this season. However, that might not be the case in the long term because of the signing of Cristiano Ronaldo. Greenwood is the second highest scorer for United with four goals behind Bruno Fernandes. One key improvement in his game is that he has improved from just being a finisher in this side to doing better on the ball while improving in his crossing as indicated in his radar above. He is always taking a high volume of shots this season as he ranks 97th percentile for shots per 90.

Some other U23 attackers who had an excellent start to the season include Emmanuel Dennis of Watford, Odsonne Edouard of Crystal Palace and Jacob Ramsey of Aston Villa.